txgunsmith14 said:
Hey all,
Can’t sleep tonight so I thought I’d post my adventure. New to the hobby and building up quickly.
I know I rushed and this timeline is to show others that patience is required not just recommended. I would have done it differently for sure


Went to South padre in June and picked up a few shells on the beach including a couple live hermits.
-came back and purchased a 10g tank and thought salt water would be fun.
-put both hermits in and some sand from the beach mixed with hermit crab substrate (yeah the dry land crab stuff)
Cleaned out all the floating wood and dumped the tank. Purchased Fiji sand thinking it was like the beach then not knowing about cycling got a starfish and two damsels. 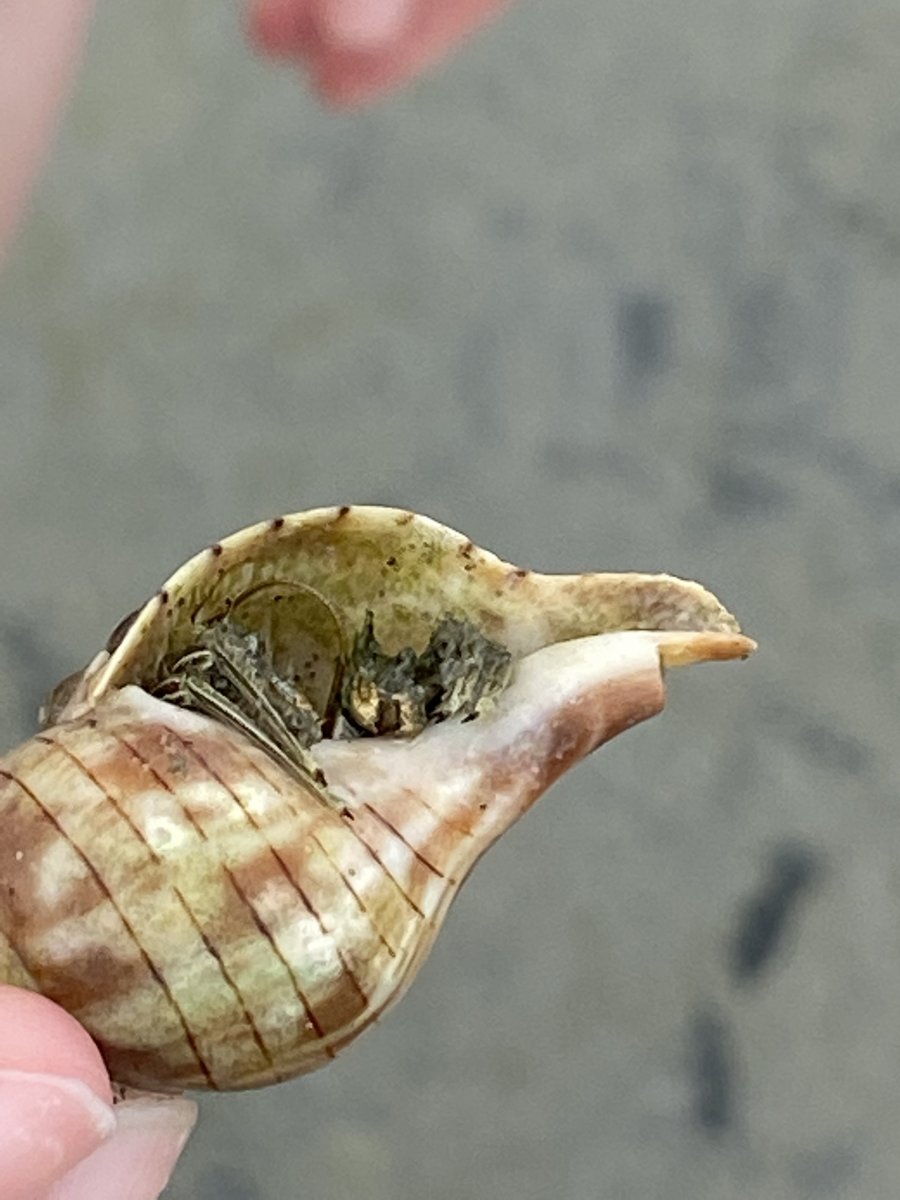 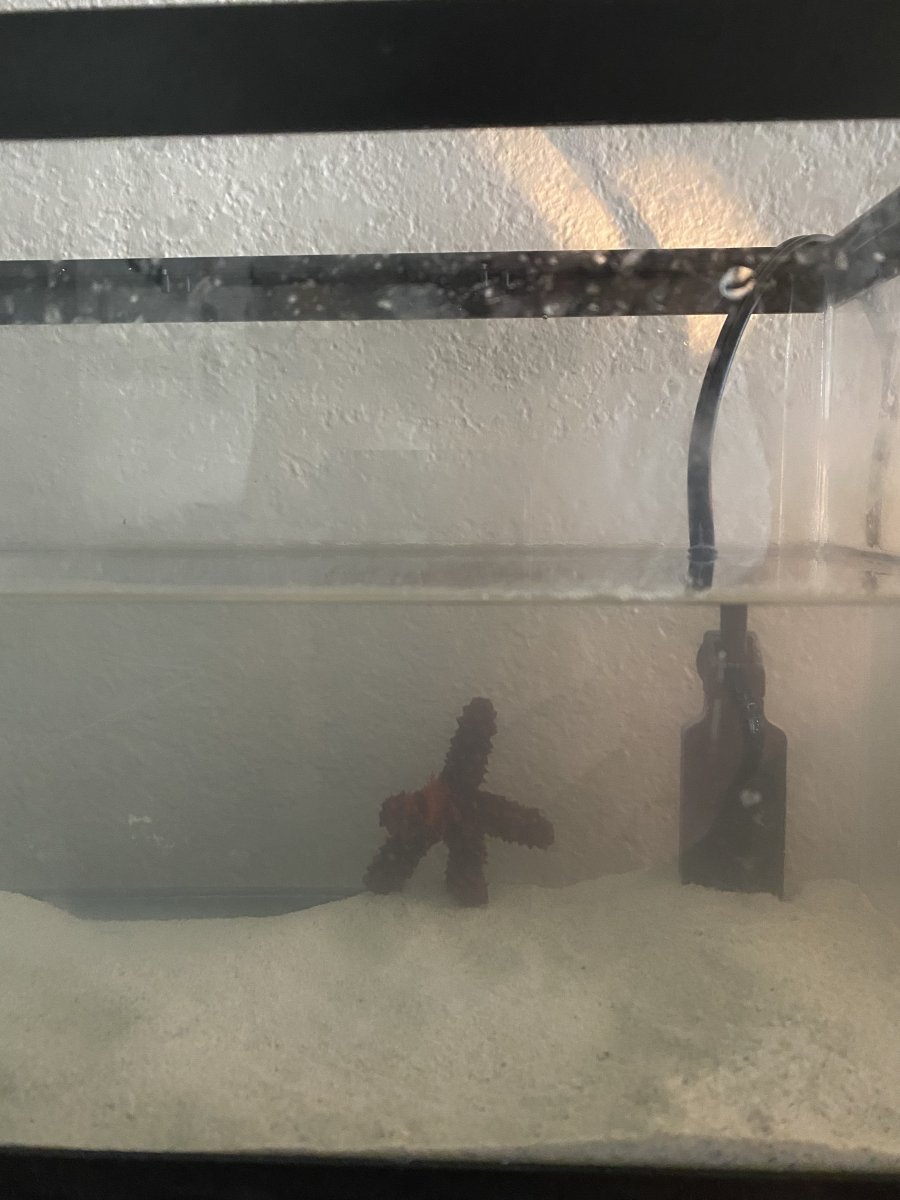 -poor starfish wasn’t doing well so move him to a glass bowl with new saltwater for two days. Stirring and splashing it every 30 minutes to add oxygen
-Struggled with heater and filter then decided after the two damsels died I was rushing.
-read about fluctuating parameters in little tanks so went to a 40g.
-only ever tested ammonia and nitrites so after a water change both of those looked great and purchased a clown. Even put fake coral in from petco lol. This was all by July.
Took the fake stuff out and threw in a few shells and a couple live rocks.
Got a power head cause “I read it should be like the ocean”.

-Mid July got more rocks cause it said live bacteria and thought my ammonia was solved.
-purchase a black and white clown and two more damsels. 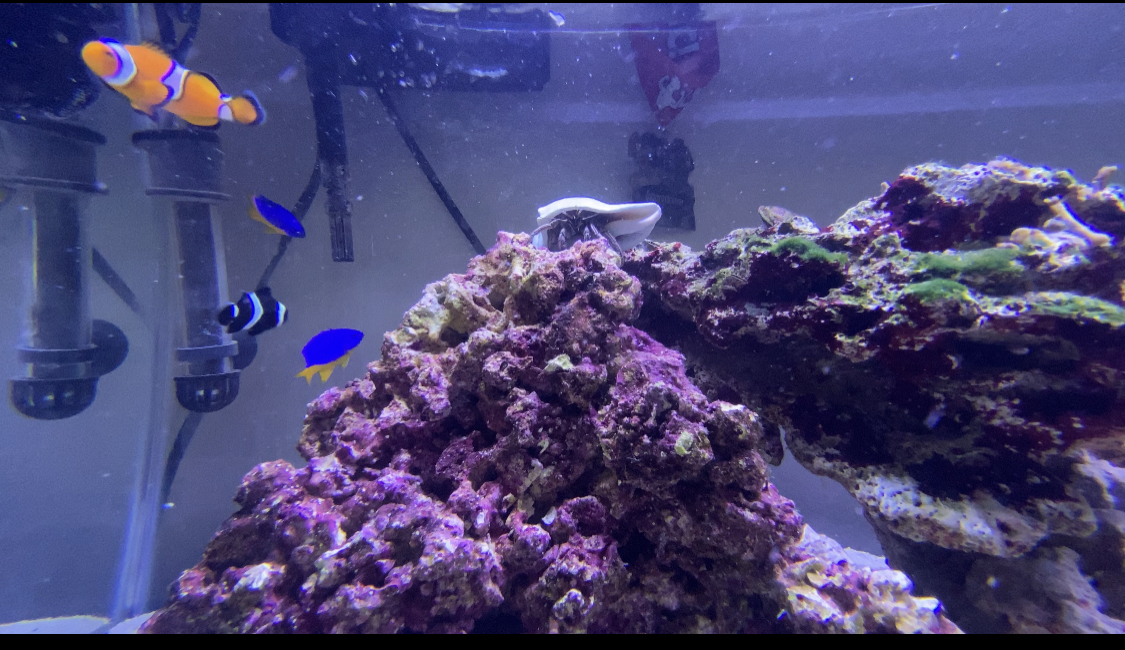 By this point two damsels had died, two hermits, orange clown, and star made it. I thought it was going ok.
-purchased a lta for $70 and was getting worried about my drive vs patience now. 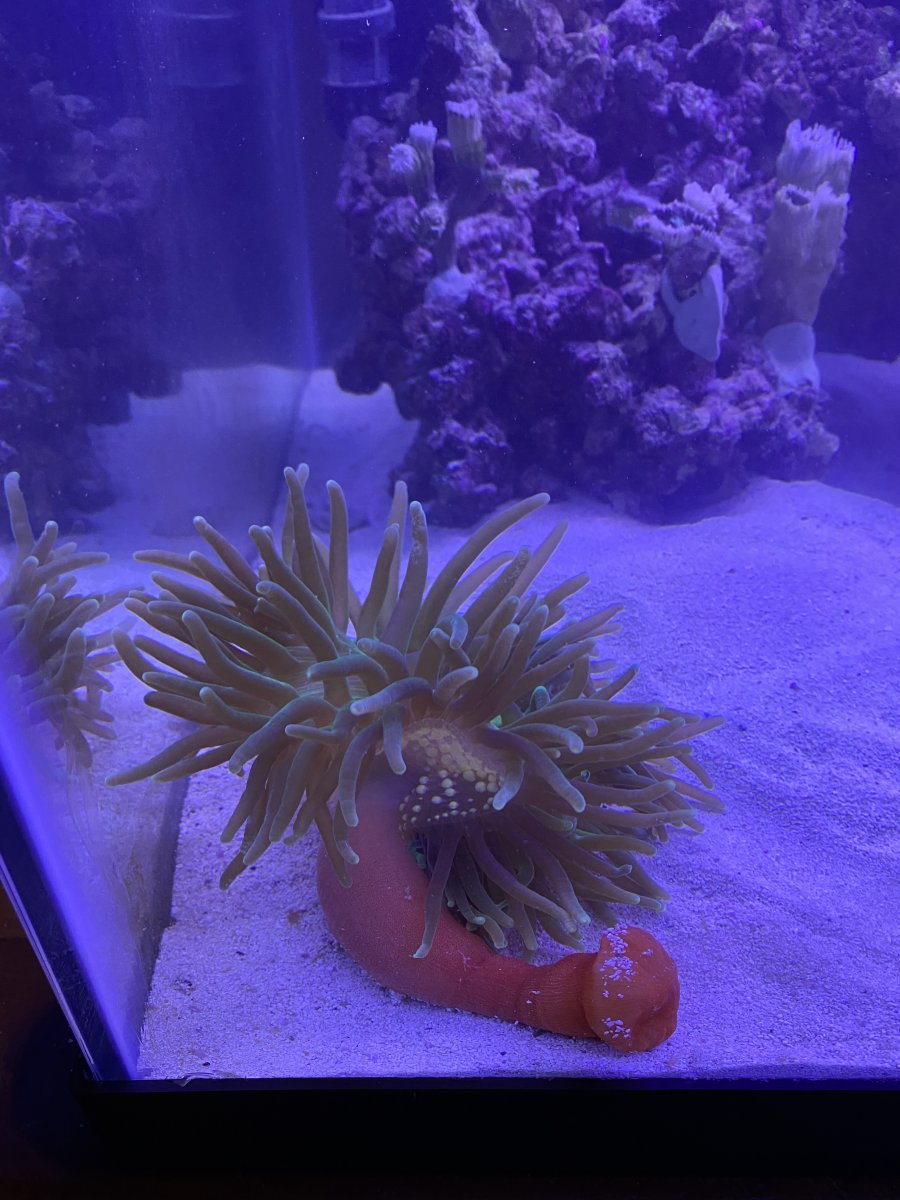 Hey my tank looked like the ocean now that I bought a cheap $40 wave maker on Amazon. 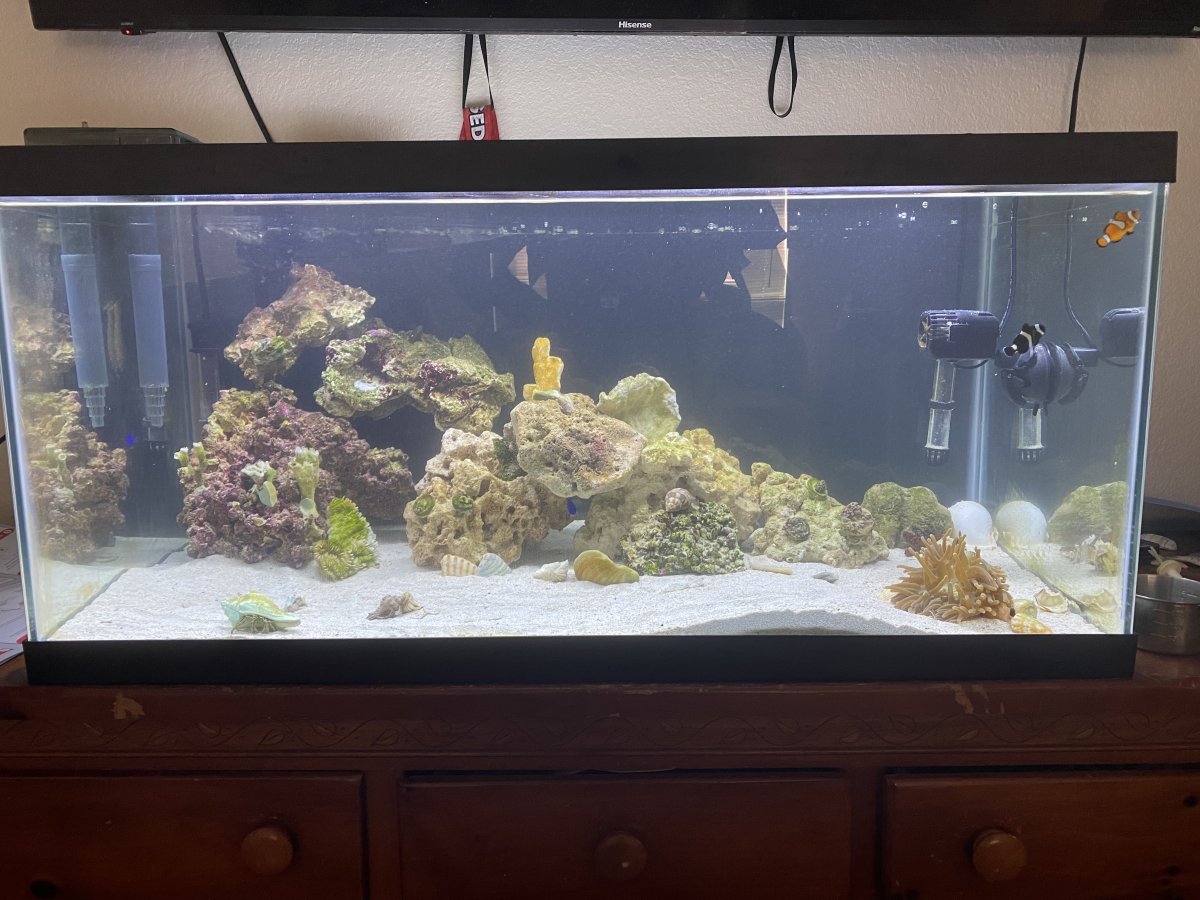 I purchased some coral frags of something with coral in the first name and thought wow how hard is this.

After burying the lta in the sand 15 million times and still popping out he finally discover the cheap wave maker early July. The tank was cover in milky color bad.

I had been doing water changes weekly of about 25% by this point so I went ahead and did a 50%. Kept him separated but he stood no chance.

At the same time the second pair of damsels began acting strange and laying on the sand etc. I thought it was because one picked on the other too much.
I finally decided to start the 10g back up and run a quarantine/reef tank and a 40g fish tank.

I moved the damsel over and my small zoa frags (yeah I finally learned what they were) and hoped I didn’t have the same issues.

I finally stopped buying living things and started getting things that mattered like test kits. 25% water change on both every weekend for the next 5 weeks. Zoas were looking good and fish were happy with the exception of one of the damsels. He didn’t make it like due to stress. 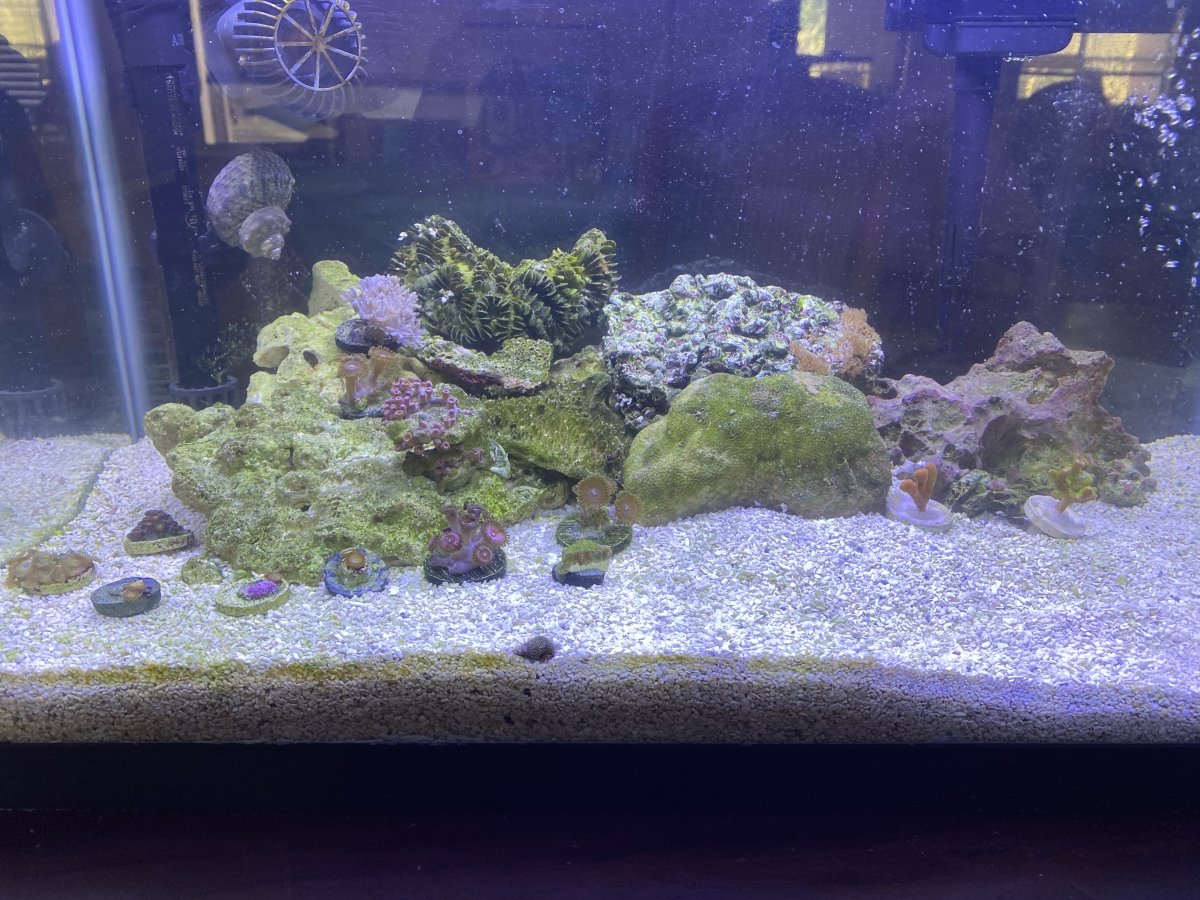 Hated the pile of rocks and built them up. 40g was doing amazing on parameters now. It had 2 clowns, 3 hermits, star, and 2 peppermint shrimp.

After 2 months of patience if that’s what it was lol I was ready to begin again.
Late August and in to this month I got a couple more fish. One butterfly and a puffer (been in the tank for two weeks no issues). Got a couple more corals (Superman shrooms 20 of them for $50 and a plate for $15)

Yesterday I decided my 10 reef tank was too small and moved it up to a 20.

Took a couple crabs and starfish and put them into the 10 so the puffer doesn’t eat them.

I know it seems I’m rushing and I’m trying not to but everything is going extremely smooth…..now.

I know I will have to have a bigger tank in the near future for the butterfly and puffer and a 150-180g is being looked in to.

Hopefully my story helps those in a hurry to understand you can’t rush this hobby. Also hope I don’t get too much grief here.

sorry so many photos are blue. Working on learning that too. 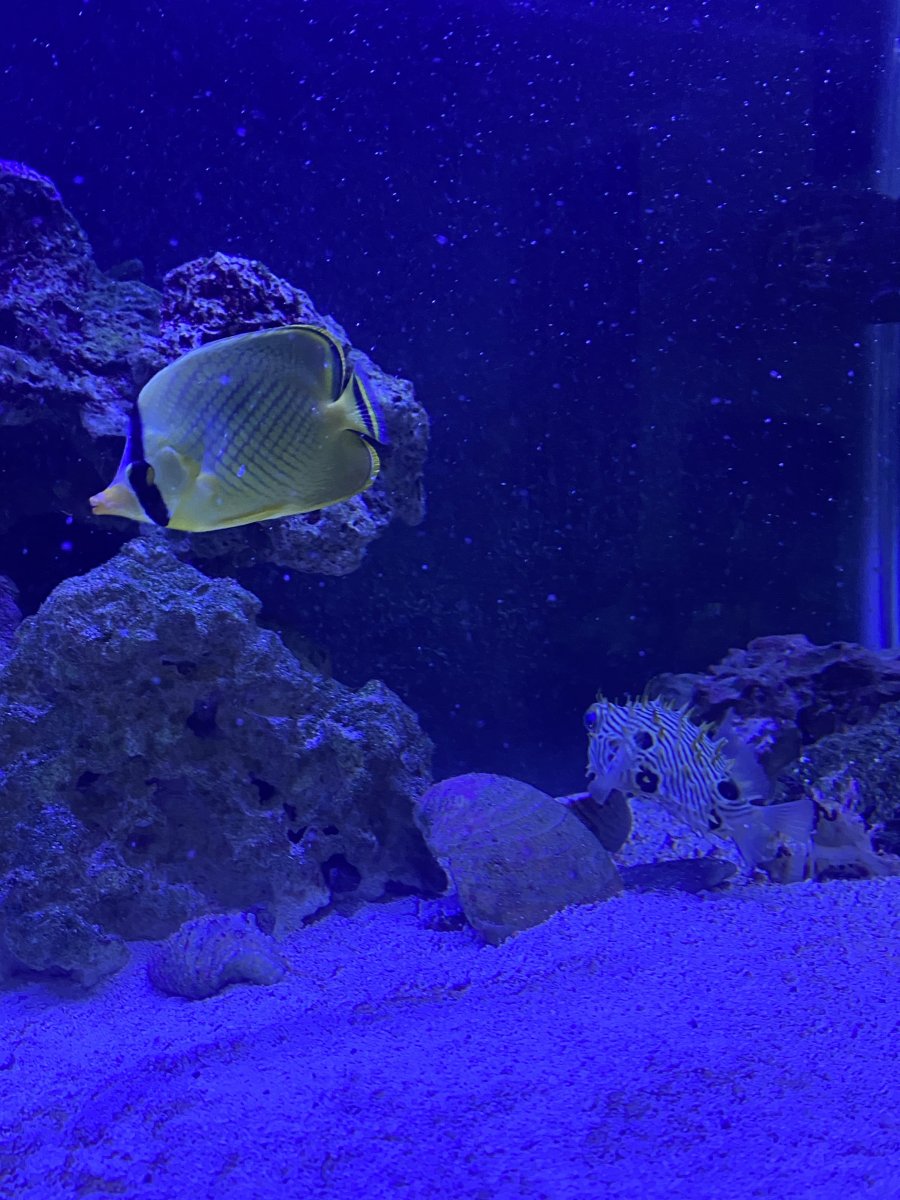 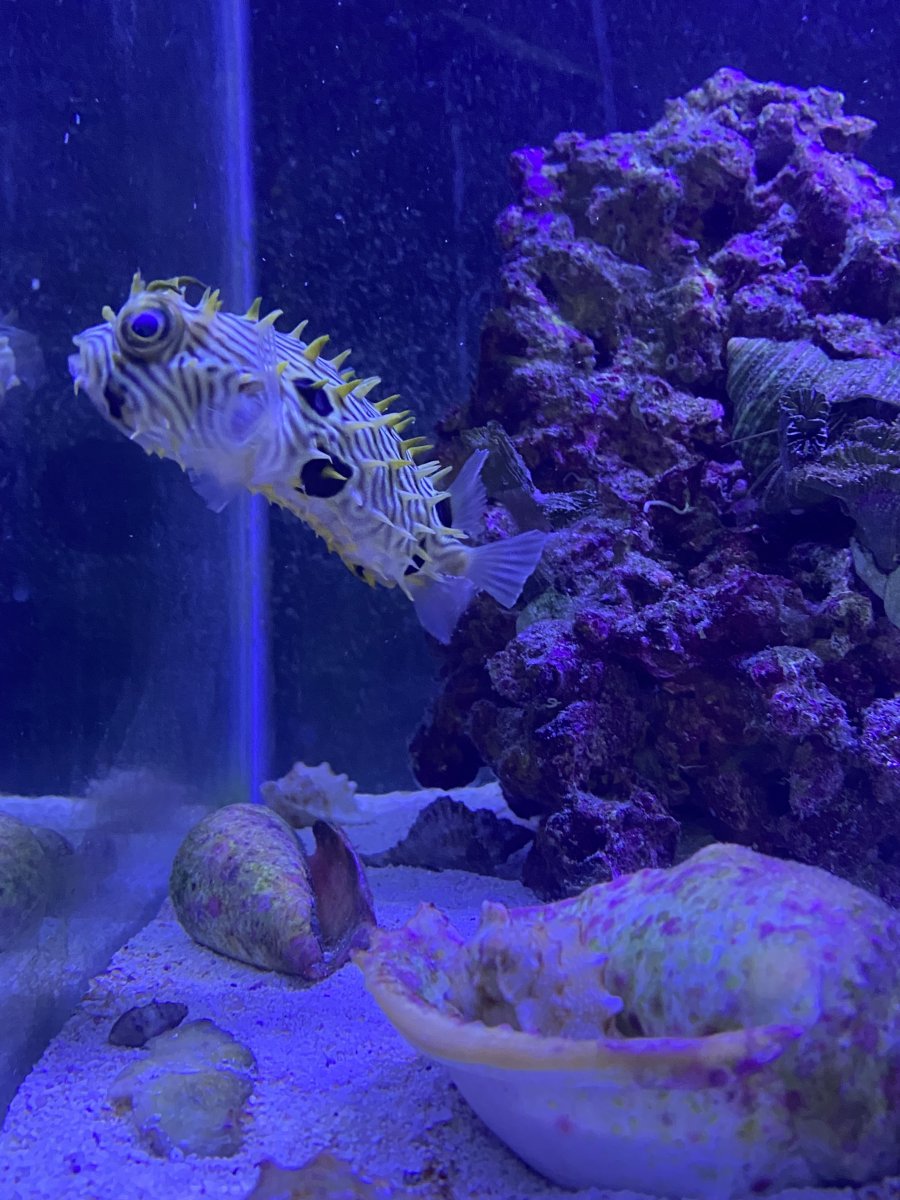 Well we went out of town on the 24th and when we returned on the 27th the puffer had died. I had thought it was just a sick fish but I didn’t think he would contaminate the others. I didn’t quarantine any fish but will going forward.

Two days later my butterfly disappeared and I found him being munched on by the crabs. Then three days later I found a firefish on the sand. My clown was acting real funny and when I looked closely I realized I had velvet likely from the puffer and what killed my butterfly. I began dosing copper 2.25 Hannah in my display as we didn’t have a quarantine tank. I removed all invertebrates to a small 10g.

I started a 20g quarantine but haven’t moved anything to it. Here we are 15 days later and I did a water change on the 40g dt . The copper is now down to 1.25 and the clown is way better.

My question is do I move the 1 firefish and two clowns to qt or leave them in dt? Do I move my copper back to 2.5 in dt or should I move to qt with 2.5 copper or just put them in non medicated qt?

pic is when the clown was bad!

Welcome to reef2reef! I’m sorry for your losses . Everyone makes mistakes in this hobby but R2R has a lot of friendly people that can help you with any questions or problems that come up. GL on the tank!!

So now I read in other articles I shouldn’t have doses my dt with copper. Did I mess up the sand and rock and have to start all over?

txgunsmith14 said:
So now I read in other articles I shouldn’t have doses my dt with copper. Did I mess up the sand and rock and have to start all over?
Click to expand...

So use the rocks for the qt tank just keep coral and invertebrates out of it?

Welcome to the R2R community!!!

Hello Back and doing it right!
2