I think I am driving myself crazy. I have this Ruby Red Scooter/Dragonet for 3 months. 32.5 gallon (long) tank. Lots of pods in there before adding him (live phyto in there too to help with pods). I also have Marine pure spheres (biomedia) for them to hide in and I am trying to grow a small piece of red macro algae in my display. He has always looked healthy. I bought a male and female. But I stupidly didn't get 2 that were in the same tank, and the male would always try and prove his dominance (TOO much) around the female and stressed her out, he always scared her off. She ate a lot and even had frozen, but I think one day she just got way too stressed, and did not make it (so she only made it about 2 weeks).
But the male dragonet has looked good since then, and I spot feed live Baby Brine Shrimp from my hatchery consistently and spot feed him. I try and give frozen too. He likes frozen cyclopods, and is so so with mysis and brine shrimp, and he doesn't like frozen fish eggs!!! For some reason. Maybe since he is pretty small, and they might be too large. But he is a hunter, I put in a hairy mushroom coral on a small piece of live rock (which I dipped). And a weakened hitchhiker worm about 3/4 of an inch emerged barely, and the little guy ENGULFED HIM since I guess the worm was skinny enough for him to gobble it up.
But the last couple days I have been spot feeding Live BBS several times a day with a couple drops of Amino Acids, and he IS STILL SKINNY! I bought more pods too, and am slowly adding them in the tank. OH. And I got some Seachem Metroplex just in case there is some internal issue. It is reef safe medication, but I was cautious and soaked it with the frozen cyclopod food, and so only a small amount of the medication then enters the tank (plus I have carbon). I medicated and spot fed the food 3 times last week (I started the dose small). And he definitely was eating the food it was soaked in.
BUT. There seems to not really be any change to the stomach. Still skinny. Is it definitely internal and I just gotta medicate the food more and do it every day for a short period? The dragonet doesn't rub against anything, or show signs of distress whatsoever. If anyone is taking the time to read this and has any input that would be phenomenal, and I would thank you for trying to help my sanity.
He is pretty small. But I don't think him being a juvenile has to do with him being this skinny. Right? 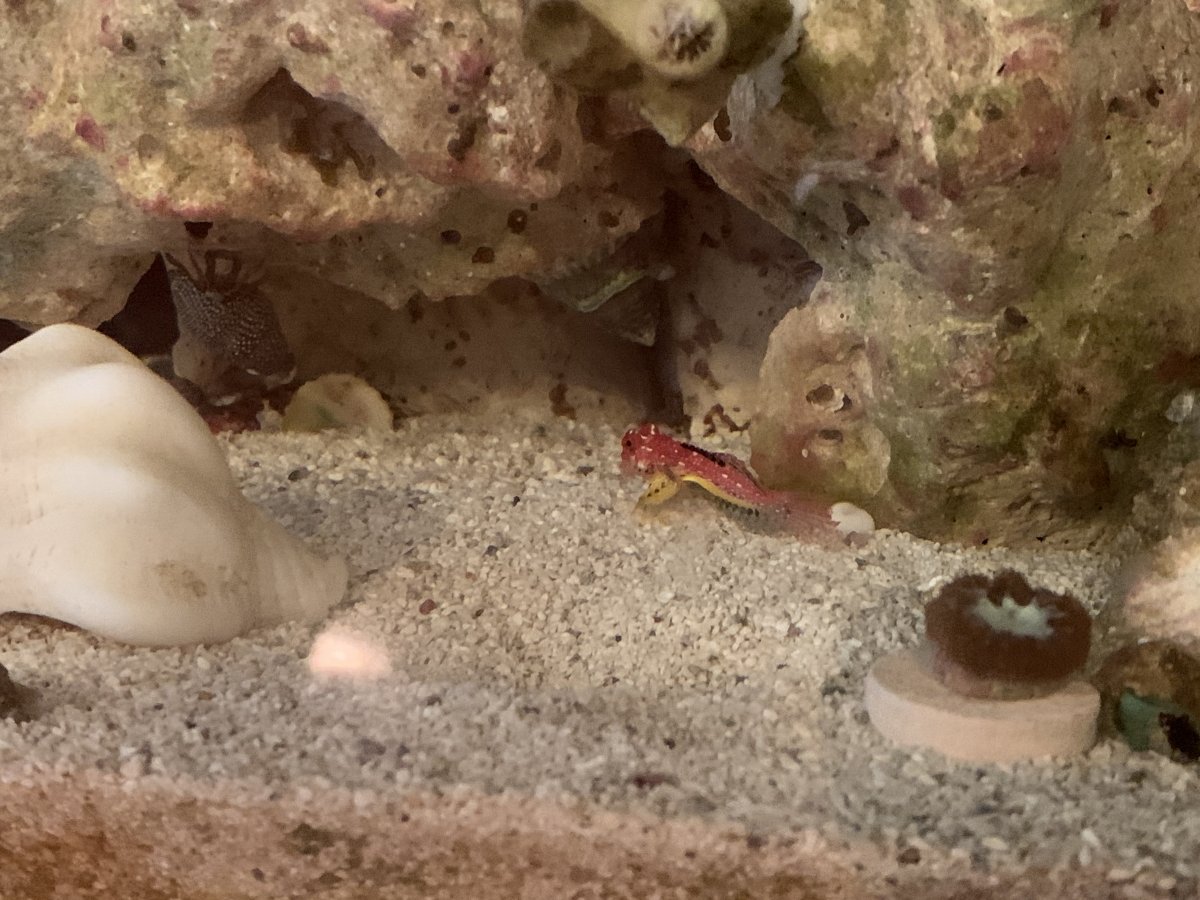 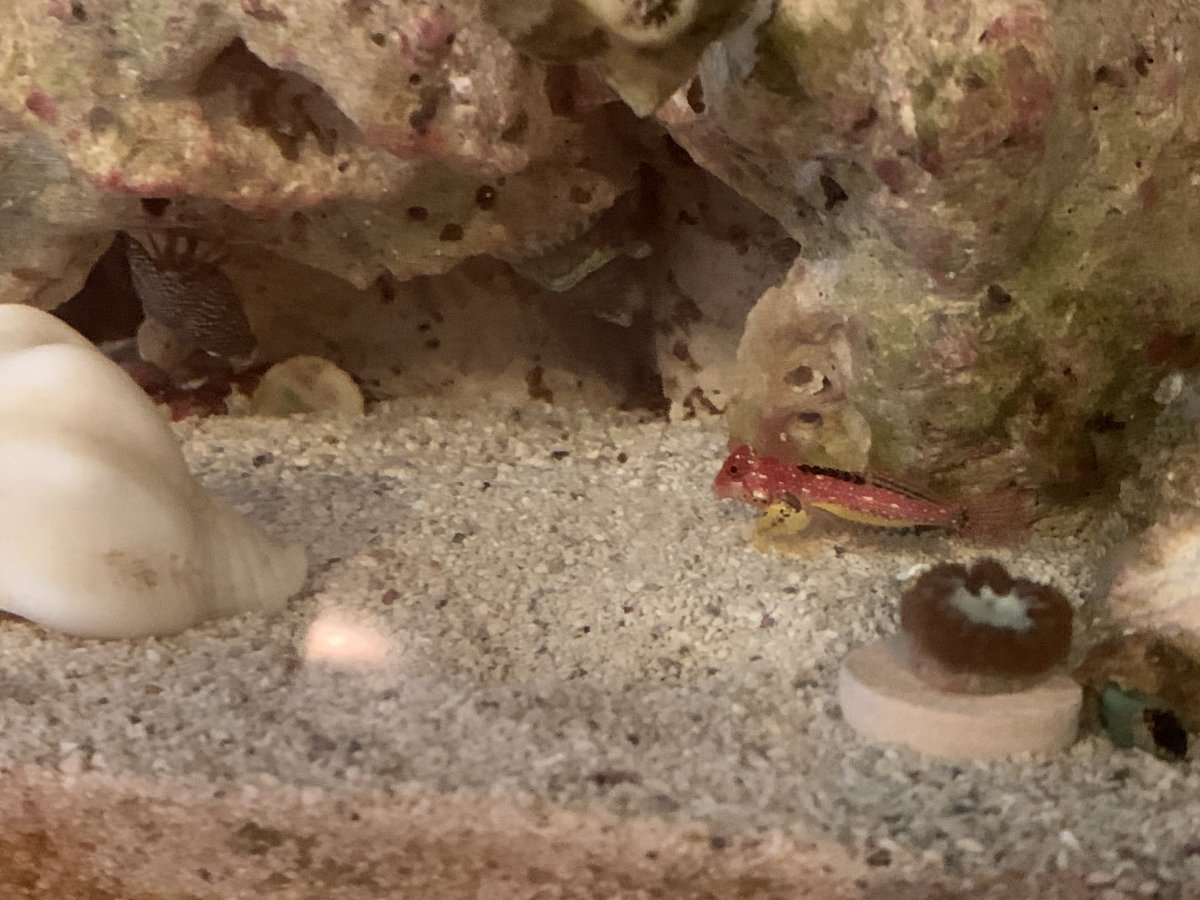 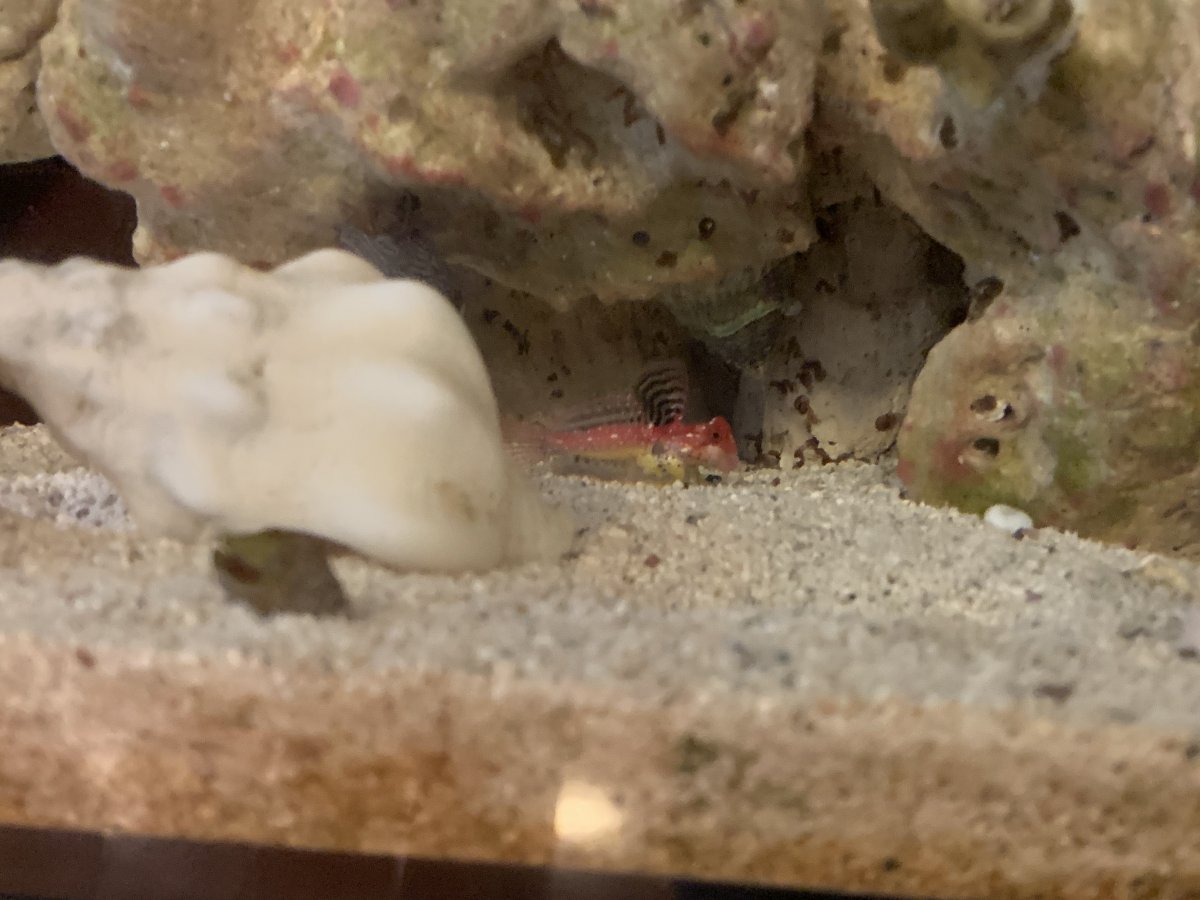 I question if it is an internal parasite issue, and if it was, those can often be managed by feeding more. That small of a tank isn’t going to be able to support a large enough pod population to keep it fed. Adjunct feeding like you’ve been doing is key...feed 3x or more per day to recreate their browsing habit. LBB doesn’t feed when it first hatches, I feed it Selco 48 hours after hatching, then feed it out to the fish.
Jay
OP

Jay Hemdal said:
I question if it is an internal parasite issue, and if it was, those can often be managed by feeding more. That small of a tank isn’t going to be able to support a large enough pod population to keep it fed. Adjunct feeding like you’ve been doing is key...feed 3x or more per day to recreate their browsing habit. LBB doesn’t feed when it first hatches, I feed it Selco 48 hours after hatching, then feed it out to the fish.
Jay
Click to expand...

Thank you for taking the time and giving your input. In addition to some Apocalypse pods I added 2 bottles of Ecopods (4 pod blend 7,000 total) before adding the dragonets, but they could've been depleted due to tank size. I didn't restock pods for a while and instead focused on spot feeding live baby brine and tried to do frozen. So yeah, I think it could be a limited pod amount. But I got some more tigger pods, and I'm going to put them all in the tank, and put them into the porous biomedia I have in the back chamber and in the tank itself to increase the breeding. I also am going to start feeding the Live BBS before they enter the tank. I do have selcon and garlic which I use for the frozen pods, and other frozen I feed. But I put some Selcon with the BBS so they could eat it, and hopefully with more spot feeding he'll get bigger. He's not scared of the feeding pipette at all anymore, and he's learning to eat a bit from the water column if it's floating down. So hopefully that can help in him eating mysis soon. But I will continue to feed him tons and fatten him up. I'd hate to see him not make it. I devoted a lot of time making sure the pods were right beforehand. And I would always see them on the glass even recently so I hope I can get him into a fatter shape.
OP

I'm lost for words right now. I went downstairs. And he didn't make it. He looked fine. No signs of his health going down. And I wasn't expecting this. I'm thinking it may have been something internal. I recently had a lawnmower blenny die a couple weeks ago. And it most likely had some internal worm issue. I had him for 3 months, and he was always skinny despite eating a LOT. I guess maybe the parasites lost a host, and with the scooter being slightly stressed at times if my shrimps were trying to steal food from him, maybe he succumbed to the same thing. I'm not sure. And the medication I guess wasn't enough. I was mostly doing the medication for peace of mind. I thought it was unlikely but possible for something internal, and I am still not completely sure. But this sucked. I am just lost for words. It could have something other than a tapeworm, and some sort of other internal parasite that affects the fish but not directly eating the fishes food.
I love dragonets and scooters. I did all the preparations to keep them. A pair ideally. Pair didn't pan out and the one male looked promising for so long. I don't know.

My ruby red dragonet is a little skinny? Is this normal?

A
Does this clown look healthy

Yellow tang stopped eating and is getting skinny, suggestions?

How is my Ocellaris looking a week into treatment?