After my biocube 14 sprang a slow leak I decided to upgrade and purchased a biocube 29. I slowly added dry rock on top of the existing rock that was in the biocube 14. Once everything was nice and how I wanted it I realized I was behind the time and needed to upgrade my lighting. I bought a cheap light that did nothing for my corals and made it flush with the hood by drilling a square to match the lights footprint. Once I realized this light was stupid I bit the bullet and bought a new AI prime 16 hd which dramatically changed my tank and I actually noticed after month of coral die off and no growth my Kenya tree frag was growing and opening more than it had before. Furthermore, I had to remove hood to make room for the light which actually made my tank look better. For the filtration upgrade I bought a bashsea mano sump that fit under my stand at Reef a Palooza NY. I hard plumed it to a eshops nano HOB overflow that fit in the third chamber. I forget what return pump I use but it was a tight fit due to the return chamber have a small foot print, I used tubing as plumping for the return. For a while I did have a fuge but the cheato died off an caused me algae issues, I believe this was due to low nutrients for the cheato to feed since I few fish and little waste. I added cheato grow but that increased the algae issue. Everything seems to run fine with little issues on water change I have yet to add a new coral/fish/invert due to the acclimation process and I haven’t had time to make water to replace what I take off. I have recently added tigger pods which seem to either hid in the marine pure block that I have through my sump or got eaten by amphipods that hitchhiked in on a coral. I believe they ate some but not all. I will be adding apex pods as well as feeding phytofeast. I also added a pod hotel I received as a gift, I haven’t noticed any change in pod population although I only added the pods yesterday. As per live stock I have
- clown fish
- yellow watchman goby
- three snails
- blue tuxedo urchin ( my favorite )
- Kenya tree ( as well as frags that were taken from the mother colony)
- zoa frag
- leather finger coral
- nuclear green pallys
- feather duster
- green star polyp frag
- pulsing xienia
-toadstool
- a mushroom frag
- and a torch coral
I also added a mp10wqd ecotech pump
The flow and light upgrade really seem to have changed the way I reef, my corals seem to have really grown to a significant size from what I bought them at. I’ll attach photos of my tank from oldest to newest. I’ll also add photos of some tank inhabitants 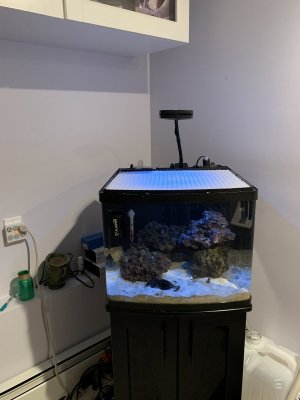 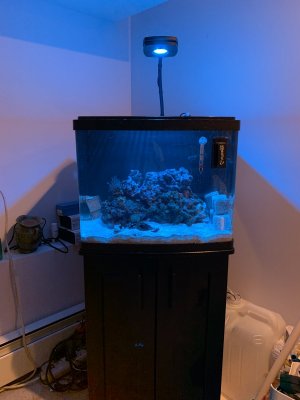 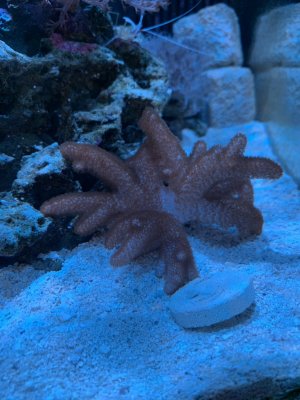 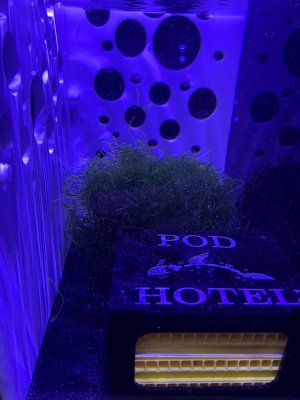 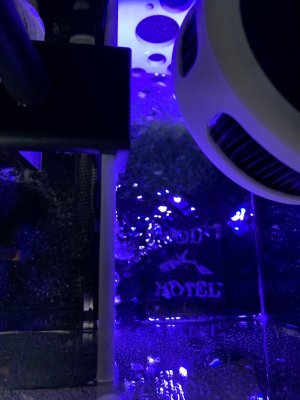 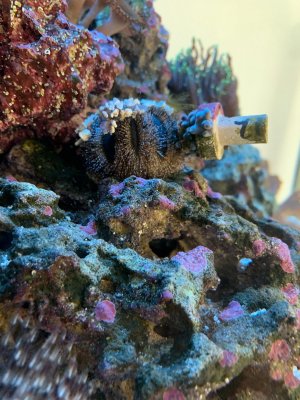 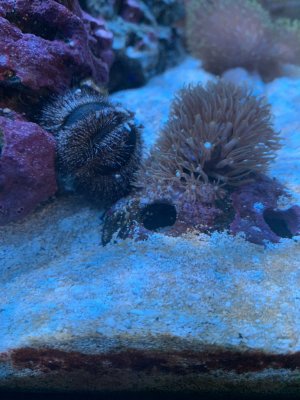 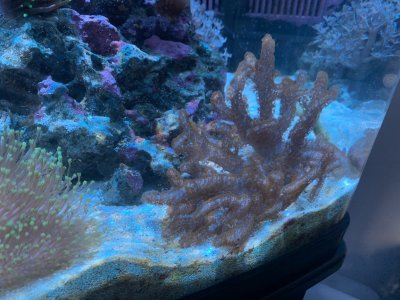 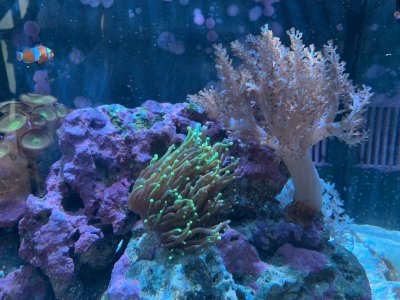 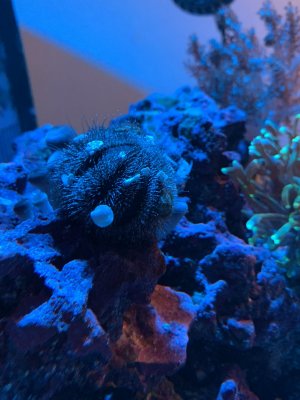 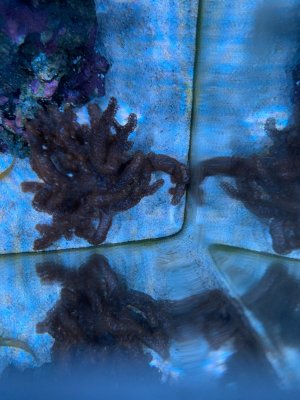 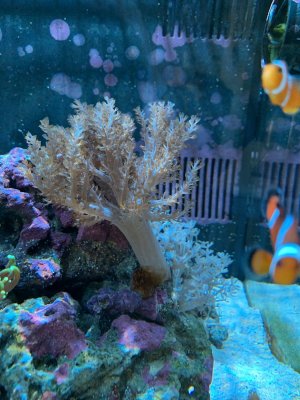 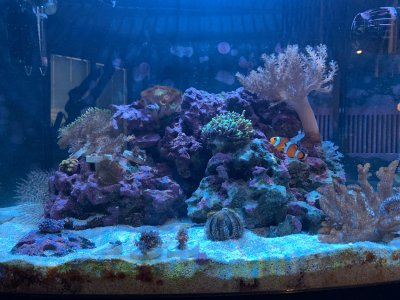 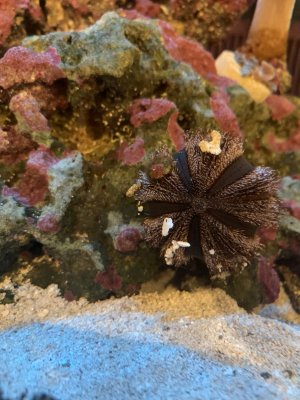 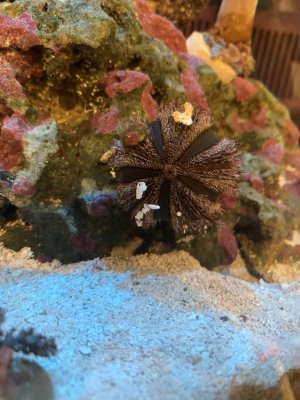 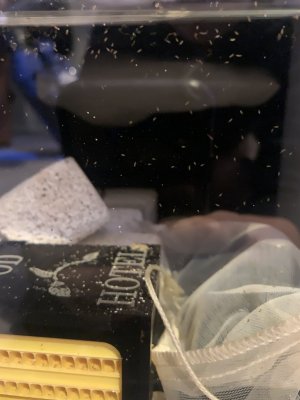 Just added apex pods and after seeing how tiny they are I turned my return pump of to give them time to settle. I only see a couple every now and then so I’m hoping there just hiding and are populating, I don’t believe the tigger pods made it because I only saw about three moving around and a couple just sitting on the bottom of the sump ( I’m assuming dead). I’m hoping that adding these two types of pods will populate my sump. I will continue to introduce pods occasionally, any type of information on properly introducing pods into a sump/tank to insure success would be helpful
OP

Update: the blue tuxedo Urchin died and a head of the torch coral receded, I suspect something occurred over the weekend while I was away, I’m testing my water now, salinity was normal too

Any reason you went with another biocube and added a sump to it vs drilling a tank for a slim external overflow?

How long has the larger biocube been set up?
OP

count krunk said:
Any reason you went with another biocube and added a sump to it vs drilling a tank for a slim external overflow?

How long has the larger biocube been set up?
Click to expand...

I’m still relatively new in the hobby and I wanted a all in one tank to keep thigh simple but as I got more experience in keeping coral and fish I decided a sump would be in my best interest, it allowed for more filtration. As for drilling, the tank was already set up when I added the overflow so drilling would have been difficult and unnecessary. I understand that drilling would have been a more sturdy option but the HOB is working nicely and I have not had any downside. The larger biocube has been set up for what I belive would be a year or a year and a half. Although the sand and some rock with a majority of filtration was transferred from the tank before it. I do envy tanks that are rimless with built in over flow but, I’m happy with what I got

Added a couple new frags of zoas and a large colony, everything’s seems to be doing well other than a specific zoa froag that is attached to a mussel. My Kenya tree has been dropping frags like crazy and I ended up give some away. I also added a single toad stool frag that was neglected at my LFS it’s currently doing fine and getting the attention it deserves. I feed the mussel phyto feast and feed copepods every once and a while to my fish. I still have a small bio load because I don’t have a QT tank and don’t want to risk killing my other fish. I have also been playing around with my flow to run it in just right. I also changed my light schedule for the better. Tank is looking good and I’m keeping up with weekly water changes.
OP

Did some rearranging in my tank and it looks better, all the corals look fine except for the zoa colony on the mussel haven’t been doing well. I don’t know what’s wrong with them, I’ve dipped them multiple times and they still don’t open. I also bought a large zoa coly but it started closing and when I dipped I noticed zoa eating nuties on them so I brushed. As mush as I could off and placed back in my tank, it has been recovering and there is no sign of anymore ( nock on wood ). It’s been opening up nicely but there are remains of where they have been ( zoas with no color). Everything looks good with the exception of dinos, I’ve been growing algae on the glass to compare them but it doesn’t look like it’s doing much. I disturb the sand to limit it’s time to grow, is this a bad idea? I’ve also set up a QT tank in a spare room so I can add more fish and increase the bio load which hopefully would help grow more algae to starv the dinos