Rating - 0%
0   0   0
I have this squishy translucent sponge like thing growing on the side of this coral. On the top, a bit to the right of center, is a small tube with two small translucent white tentacles coming out of it. You can only see one tentacle in the photo. The large cut on the sponge thing is from me digging into it with my fingernail to see if it was solid or squishy. Any ideas what I'm looking at? 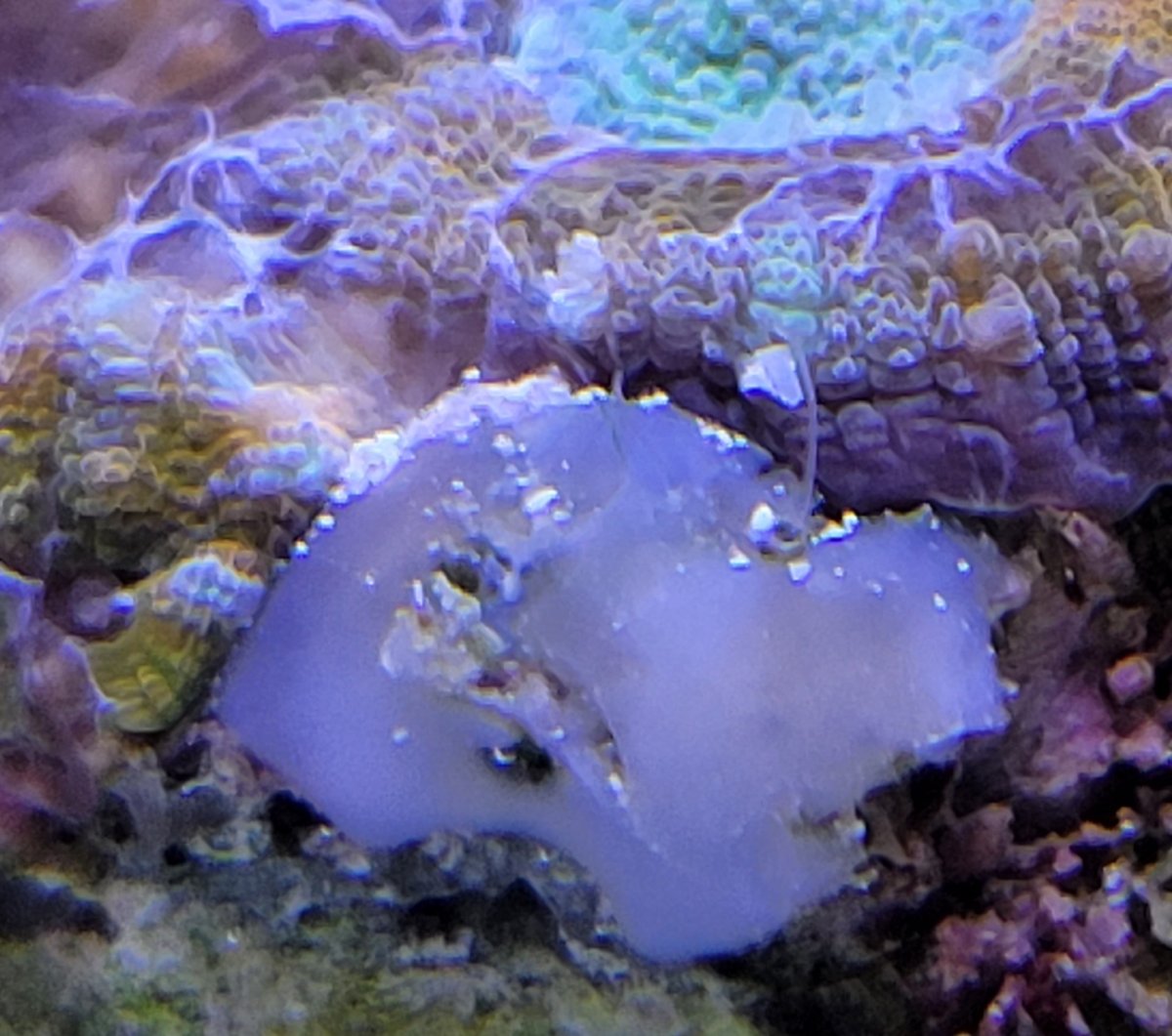 Another question: Is there any way to take photos of these small reef tank critters with a smartphone without them looking so grainy?

Rating - 0%
0   0   0
Sounds and looks about right.. if you can just super glue the tube shut.. pulling the coral out and in the air for a minute will prolly kill off thr sponge also if that’s what you want.

Rating - 0%
0   0   0
With the two tentacles sticking out, my guess is Spionid Worms - generally they’re harmless filter feeders, but some of them/some of the time they will bore through corals. This is ugly, but they’re almost certainly not going to kill anything in your tank by doing this.

If yours are bored into your coral rather than your rock behind that sponge, then I’d probably say to try either supergluing the tube shut repeatedly as needed to try and essentially starve the worms, or to try injecting H2O2 into the tubes directly. I don’t know if these methods would work for you, but I have heard of at least one success story with the superglue (the H2O2 was suggested for someone with a much larger, coral boring population, and I don’t know if it was ever attempted).

P.S. it looks like you may have a second one in the photo just to the left of the first (it looks like there are two more tentacles - the worm’s palps - sticking out of the sponge, but I can’t see a tube where they would be sticking out from, so I’m not sure).

Rating - 0%
0   0   0
Thank you for the quick replies! I'll try the superglue method, have already tried breaking the tube off with no success.
Will the sponge interfere with the coral growth?

ZekeBoniface said:
Thank you for the quick replies! I'll try the superglue method, have already tried breaking the tube off with no success.
Will the sponge interfere with the coral growth?
Click to expand...

Generally sponges don’t (they’re usually harmless filter feeders), but some will (the ones that do typically impede/outcompete the coral through chemical warfare like soft corals and leathers are known to). I’d say to just keep an eye on it and see if it starts creeping up onto the coral itself or if it just grows around it. If it starts growing on/over the actual coral rather than just around the base of it, you’d probably want to remove the sponge. If it just grows around the base, then I’d say to keep it.

Some form of sponge or nuisance??