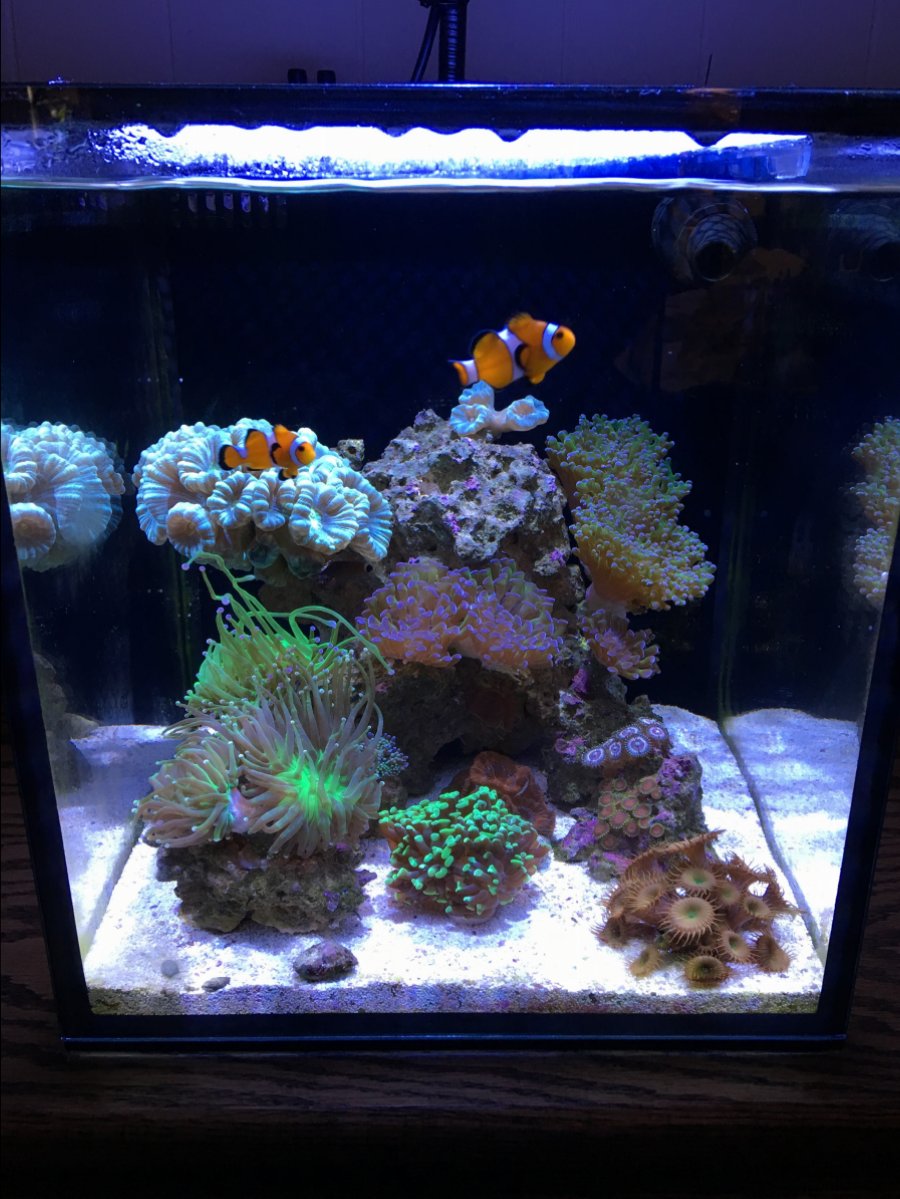 Top down shot from last night. Things are really starting to fill in. I love this little nano. 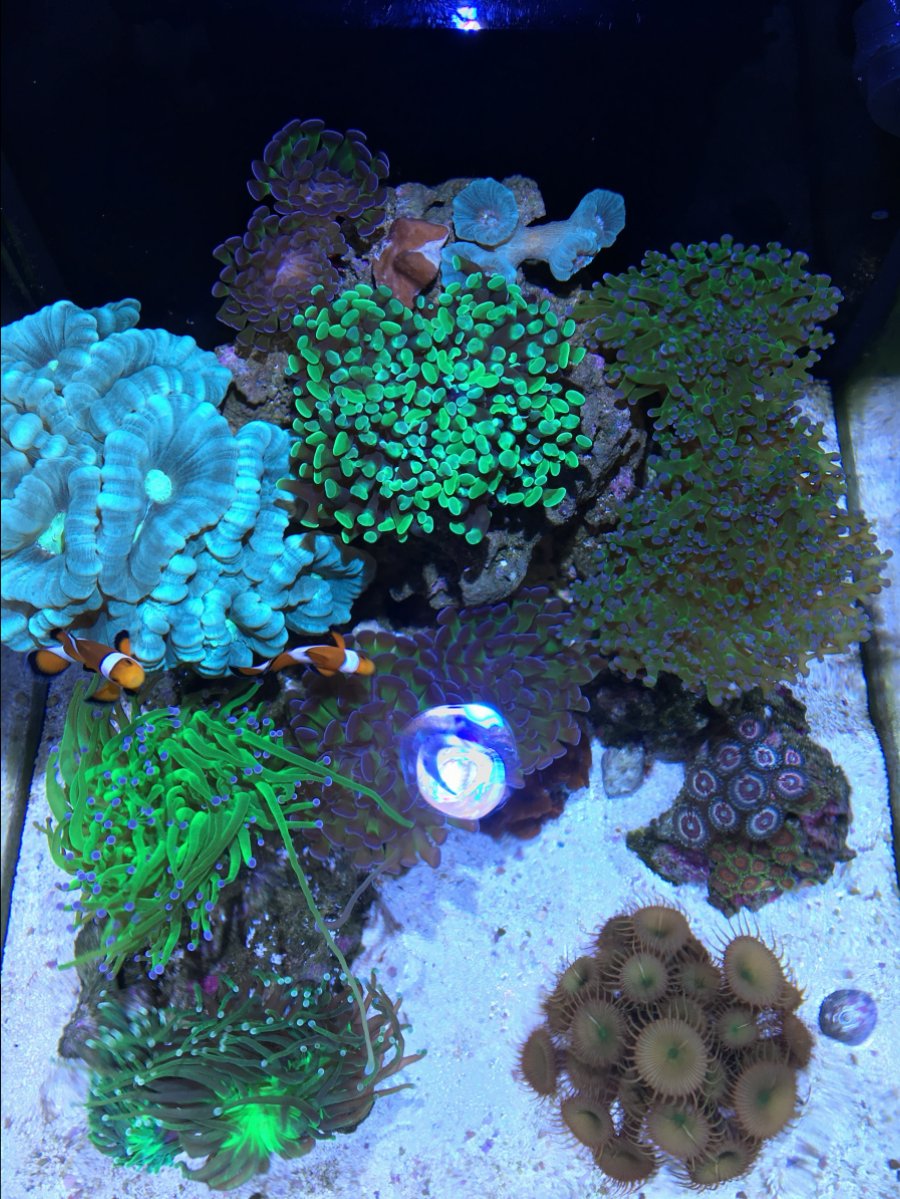 Another top down shot, just because they look so good. 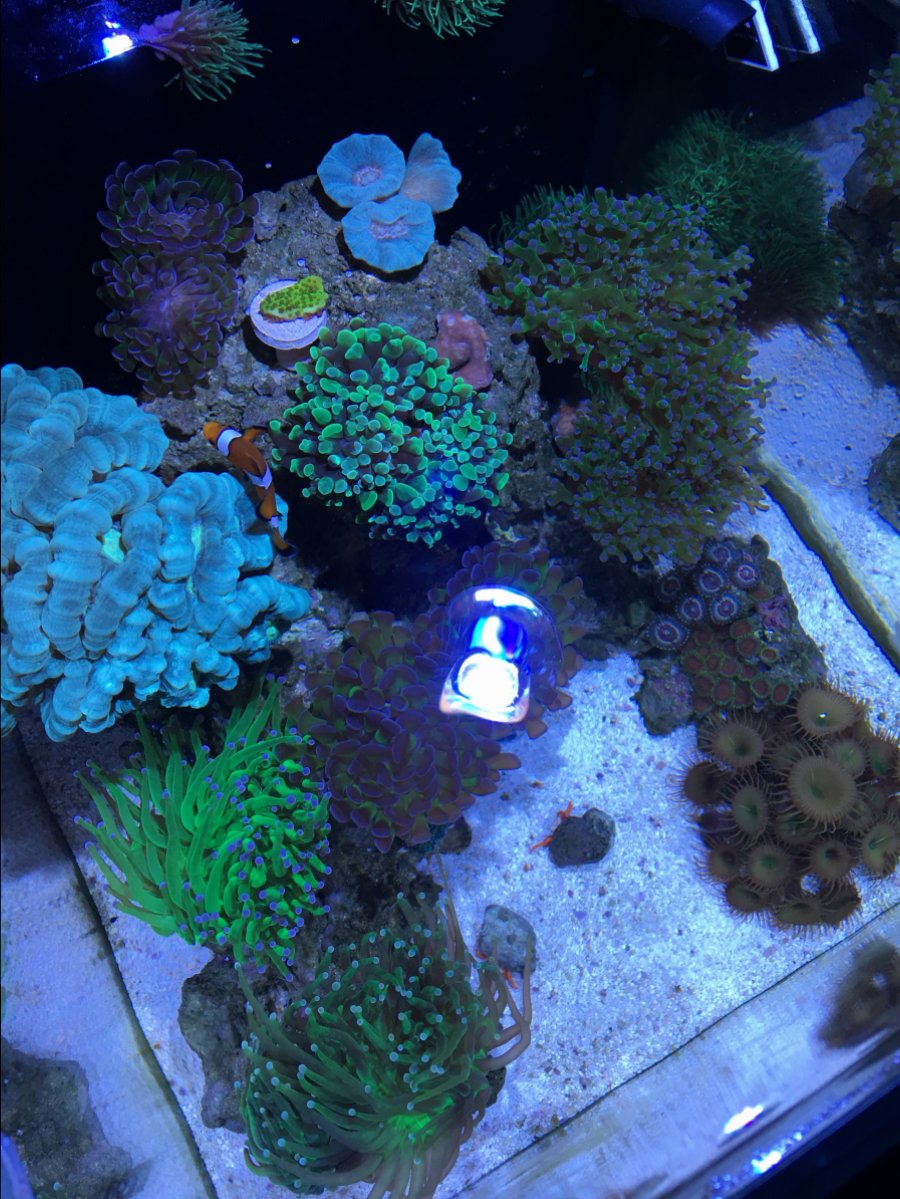 Sitting here daydreaming at work today. I've always thought I'd want to upgrade to a bigger tank, but I love the ease of this little nano. I have a 55 gallon freshwater tank, and honestly I loathe doing water changes and or maintenance on it. This little tank is so easy to work on and with I don't know why I would want to go any bigger. Still have plenty of room for coral too. Speaking of, I still need some more pop of color. I had a purple torch but lost it to brown jelly. Caught it quick so it didn't harm the rest of the tank. Also placed some bam bam zoa's up higher on one of the rocks. The orange color from these zoa's are top notch! I also have added a chateo reactor, but plan on removing it as its making my tank too "clean" for the lps corals I have. 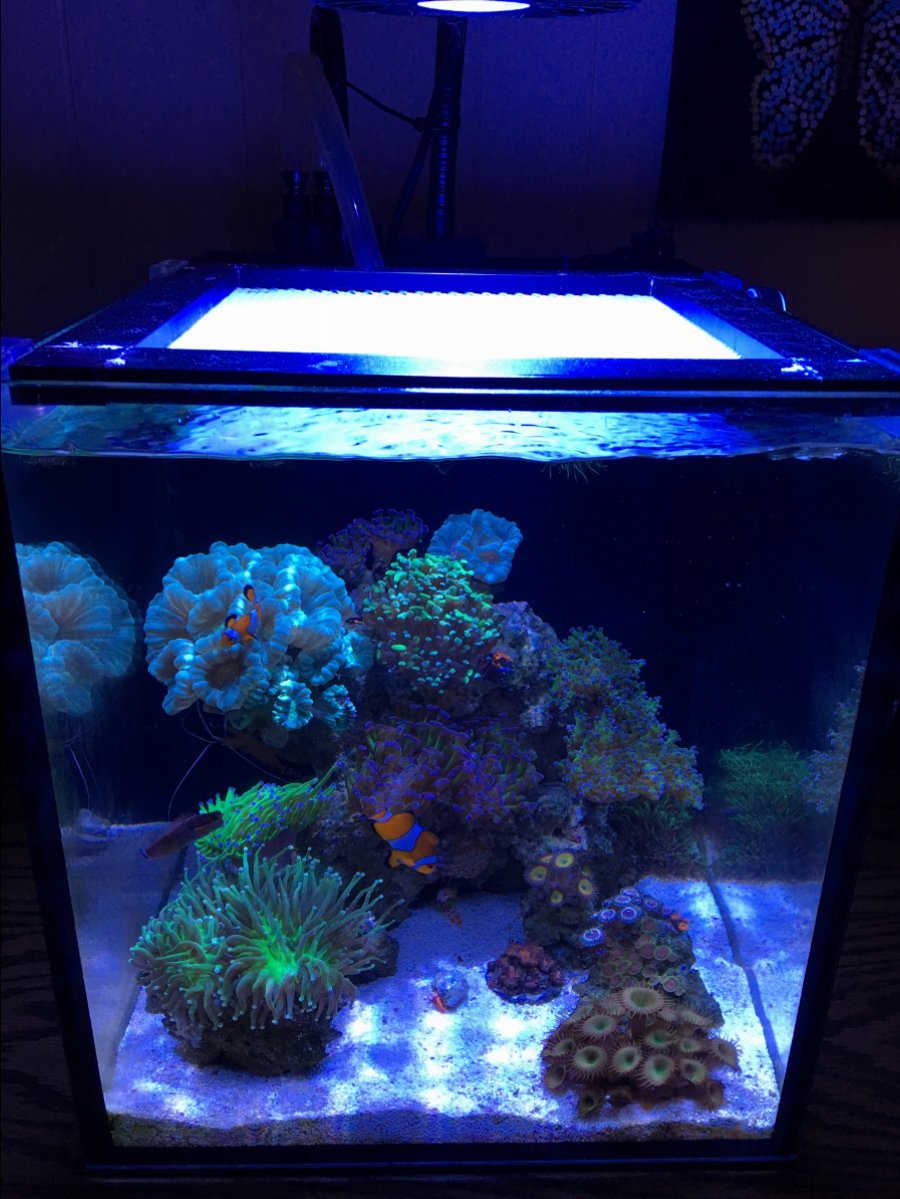 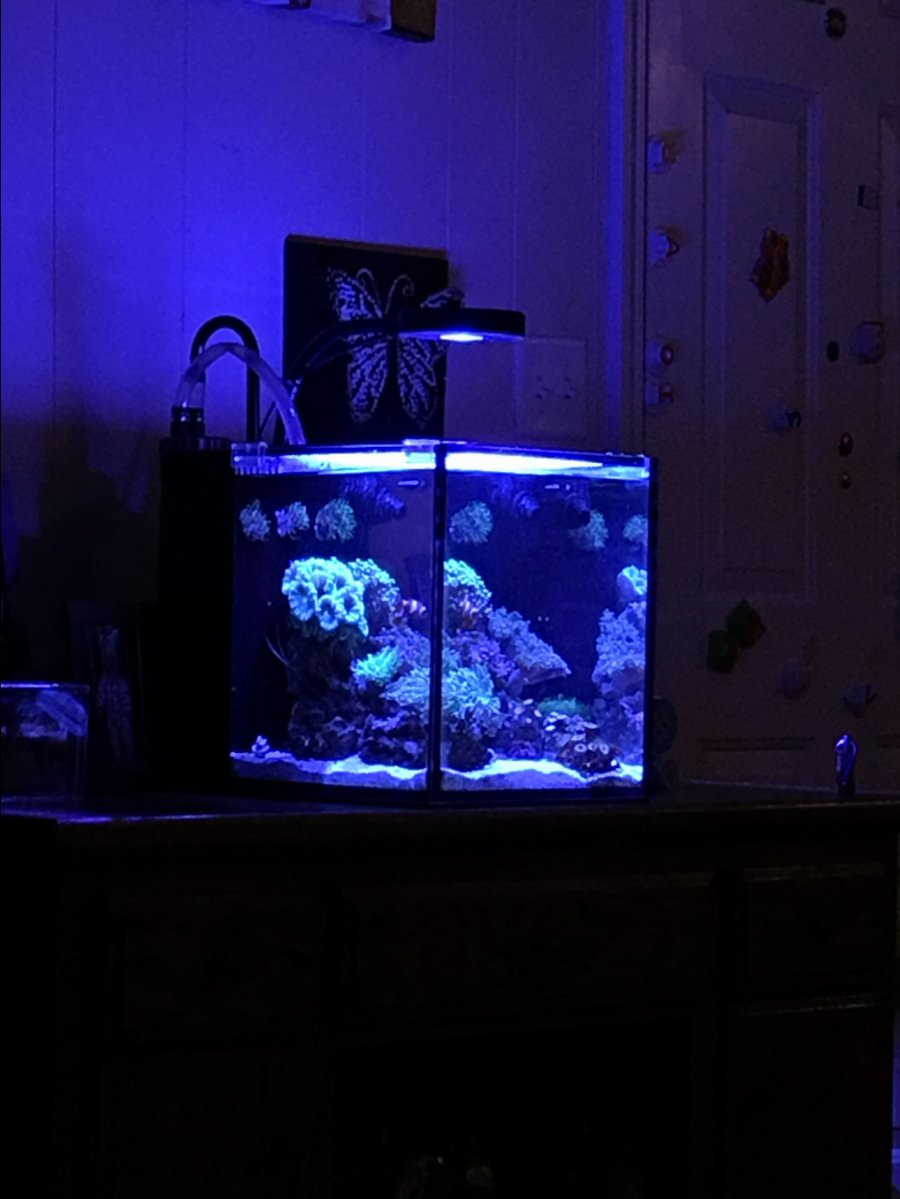 Still trying to figure out what to place up here. Any thoughts? 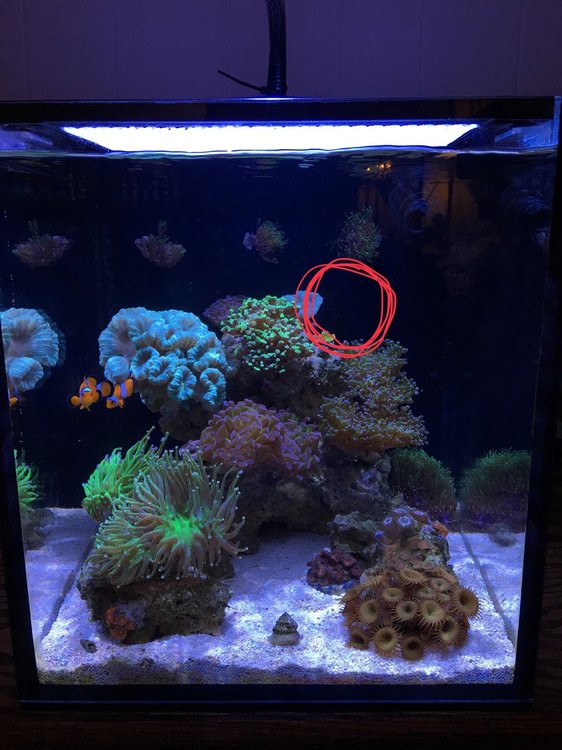 Wow. This tank is gorgeous. Anything you put into that missing spot should be a high flow piece, its going to get blasted by the spin stream right?

Maybe take a stab at an easy piece of SPS? Its in the top 1/3 of your water column and with the light and flow might be capable of growing.
OP

JBKReef said:
Wow. This tank is gorgeous. Anything you put into that missing spot should be a high flow piece, its going to get blasted by the spin stream right?

Maybe take a stab at an easy piece of SPS? Its in the top 1/3 of your water column and with the light and flow might be capable of growing.
Click to expand...

Doesn't get too blasted, but yes there is more flow in that area each pass. I had a frag of Montipora Spongodes in that area, but its bleached, and pretty much receded. I've moved it to a lower flow/ lower light area in hopes it will bounce back. I have thought about a red or purple monti cap, or maybe a pink birdsnest in that area. Saw a tank over the weekend, a Fluval 13 gallon nano that used stock lighting and flow and had a huge monti cap in it. Half tempted to see if that would work in my system without changing up much.

That would be awesome, but they are pricey around here.

I’m sitting here at home looking at my tank and I just don’t know what’s going on. Seriously baffled. The candy cane isn’t as fluffy as usual, hammer just looks blah, but most everything else looks normal.


Pulled my results from my last waterchange, yes I’m slacking it’s a few days past my usual scheduled change. Here are my results.

I mean I have a drop in Calcium, slight drop in Alk, and a pretty decent drop in MG. However this is over a 10 day period. No change in lighting, or huge swings in temp. The torch corals have been next to the candy cane colony since March of last year. I just don’t see them starting to sting after almost a year in the tank. Am I wrong thinking that? Tentacles have brushed against it all this time with no effect.
Im just kinda at a loss for words. Nothing sticks out to be a culprit.

I also bought a bottle of fuel over the weekend and dosed once when I fed Reef roids to the tank. That was Monday and everything has seemed blah since then. I’m not certain it is the fuel or something else going on. I’ve considered moving the hammer up top, to the bottom right of the tank behind the frogspawn. In its place maybe get a Frag of Red and Purple monti caps and give those a try.

One last thing. Found a couple Aiptasia in the tank Monday after feeding. Contacted the owner of my local LFS to see if he had any peppermint shrimp. He did and held one for me. Got him yesterday and put him in in hopes he would take care of things. First look of the tank when I got home shows that the aiptasia has been taken care of. He’s just chilling now under the main rock with the candy cane pistol and Yasha Goby. 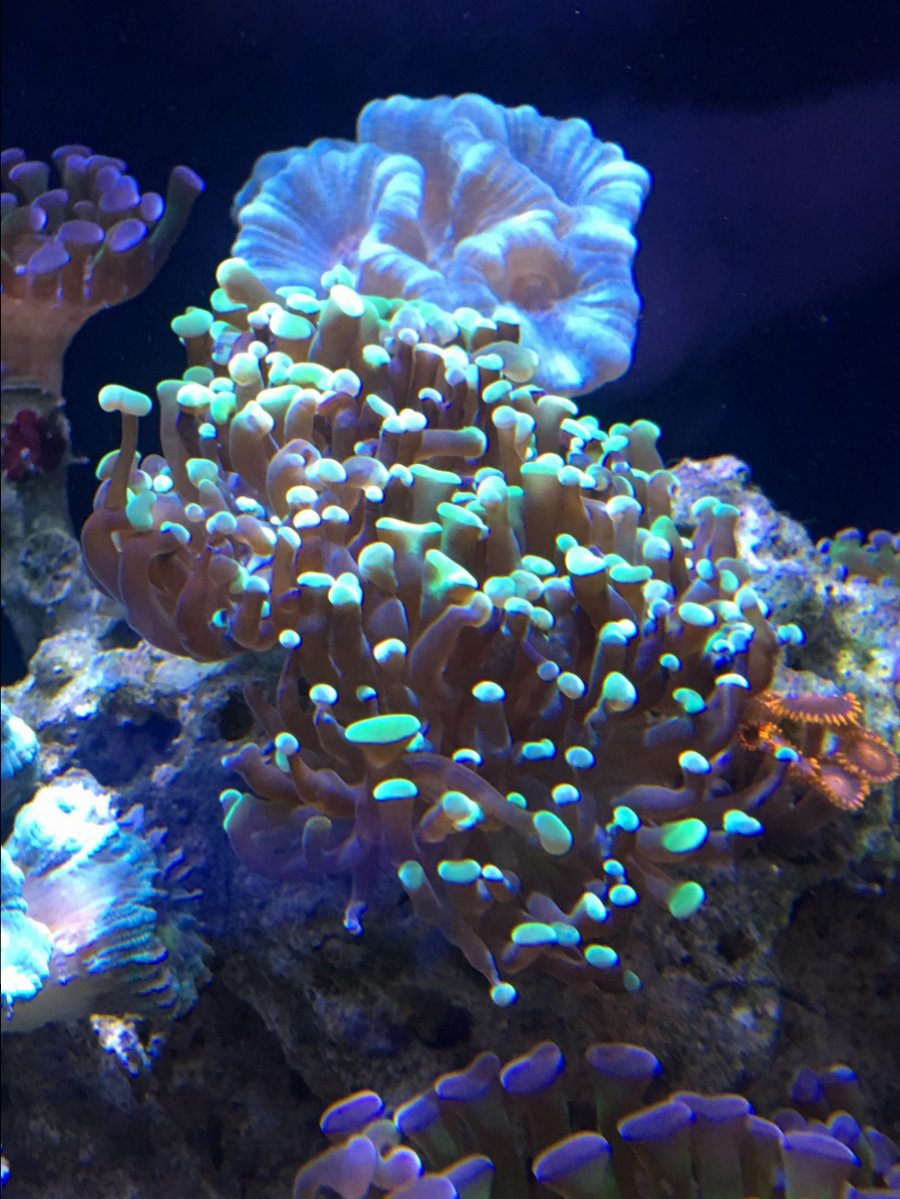 Are you just using the stock return pump for flow?
OP

No I replaced the stock pump with a Sicce .5.

How is the reactor refugium for you on the im tank? I am considering doing it and thought I would see how you like it.
OP

Actually it worked too well. Grew chateo like mad but made my tank too “clean” for my LPS. If it was a SPS tank it would still be on there.

Over the weekend I traveled to Daytona Florida to see the Rolex 24. Left the tank in the hands of my wife and daughters. Figured I would come home to a algae covered mess or worse. However my 10 year old was diligent on when to feed and how much to feed and the tank looked great when I got home! 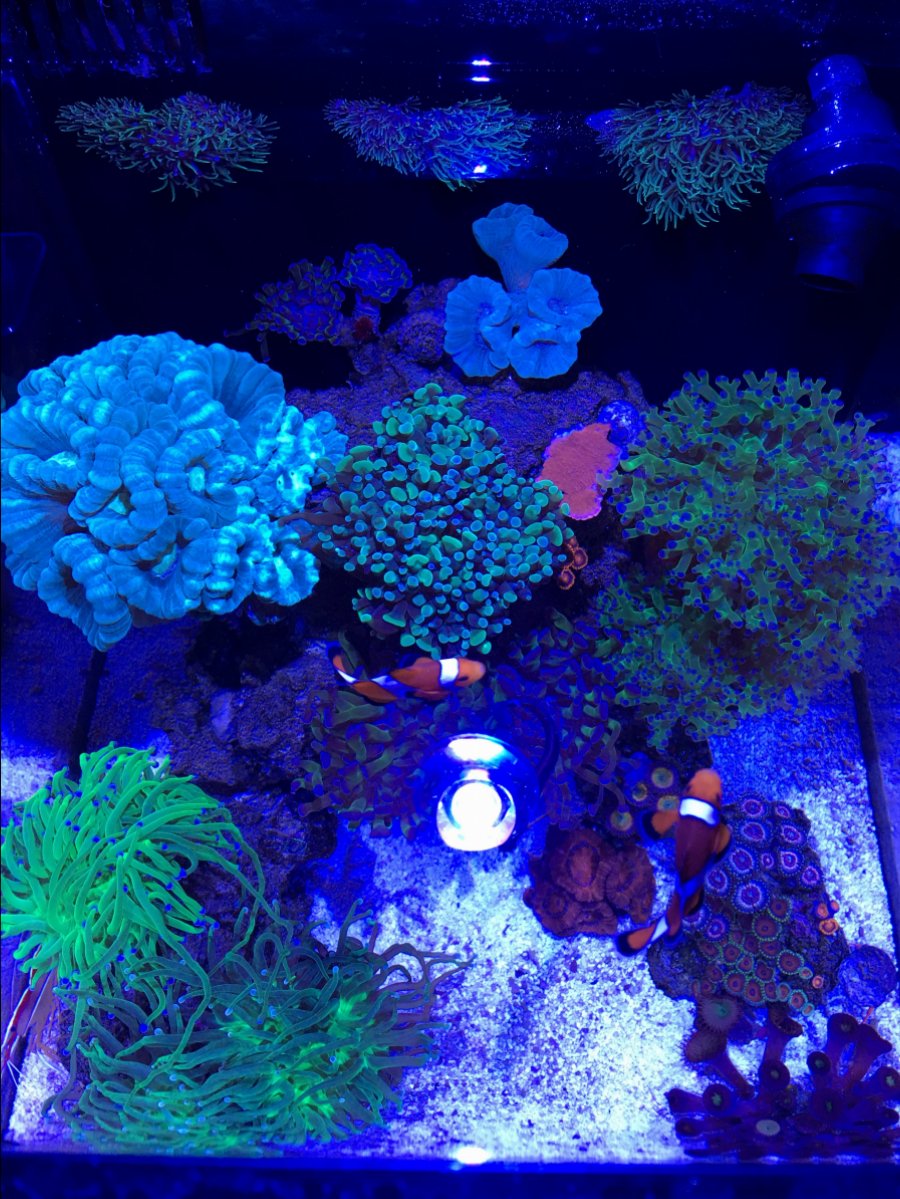 Tank has been pretty much on autopilot recently. Still looking for that "right" coral for my shaded spots. I've found some that I'd like to keep, but the prices keep me from pulling the trigger. There is a frag swap locally in the coming month I might attend if I can get away from other responsibilities, if so hopefully I can find what I'm looking for there. In the mean time things continue to thrive and I continue enjoying this little nano.

When I got home Monday evening I noticed another white spot on the monti and decided to move it. The only place I could really move it to was a spot behind the area I had it originally. However with my flow, this will keep from any sweepers from reaching it. Now that's not to say later on down the road when its larger I wont have the same problem, but for now I hope it thrives where it is.

Been trying to figure out what I want to place in the sandbed. I was looking at a plate coral yesterday but it was a bit too large for that area. I haven't decided if I will put ricordea's down there or something else. My thoughts keep leaning towards a small plate of some type.

Visited the LFS yesterday and came home with a couple new frags. Gonna try my luck with a purple torch again. This time this one has some orange in the tentacles and bright golden/yellow tips.

Also snagged a nice 6 polyp frag of Yellow Brick Road zoa's. Had to have them because yellow zoa's are hard to come by around here.

This weekend I'm picking up a Mint Pavona, Duncan, and an Orange Ricordea. This tank is getting packed for sure. 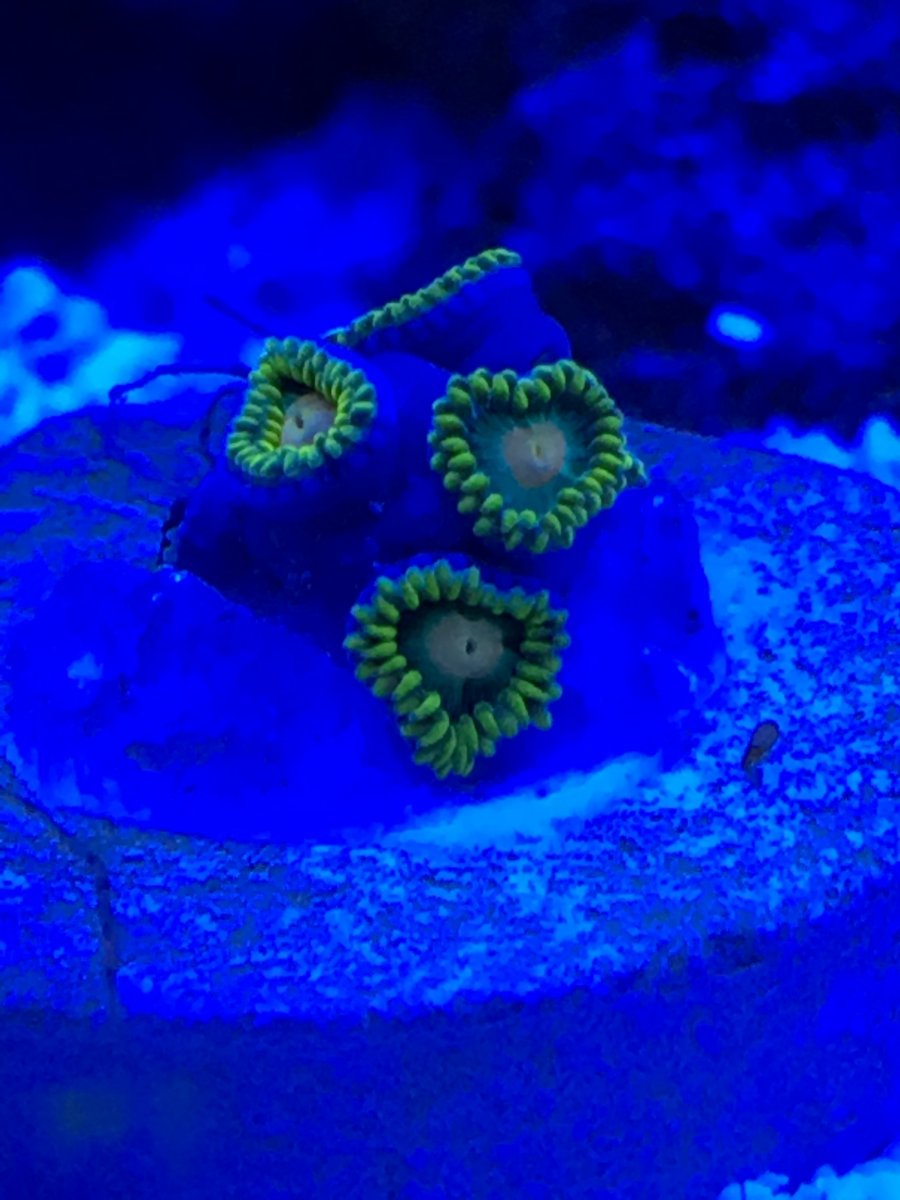 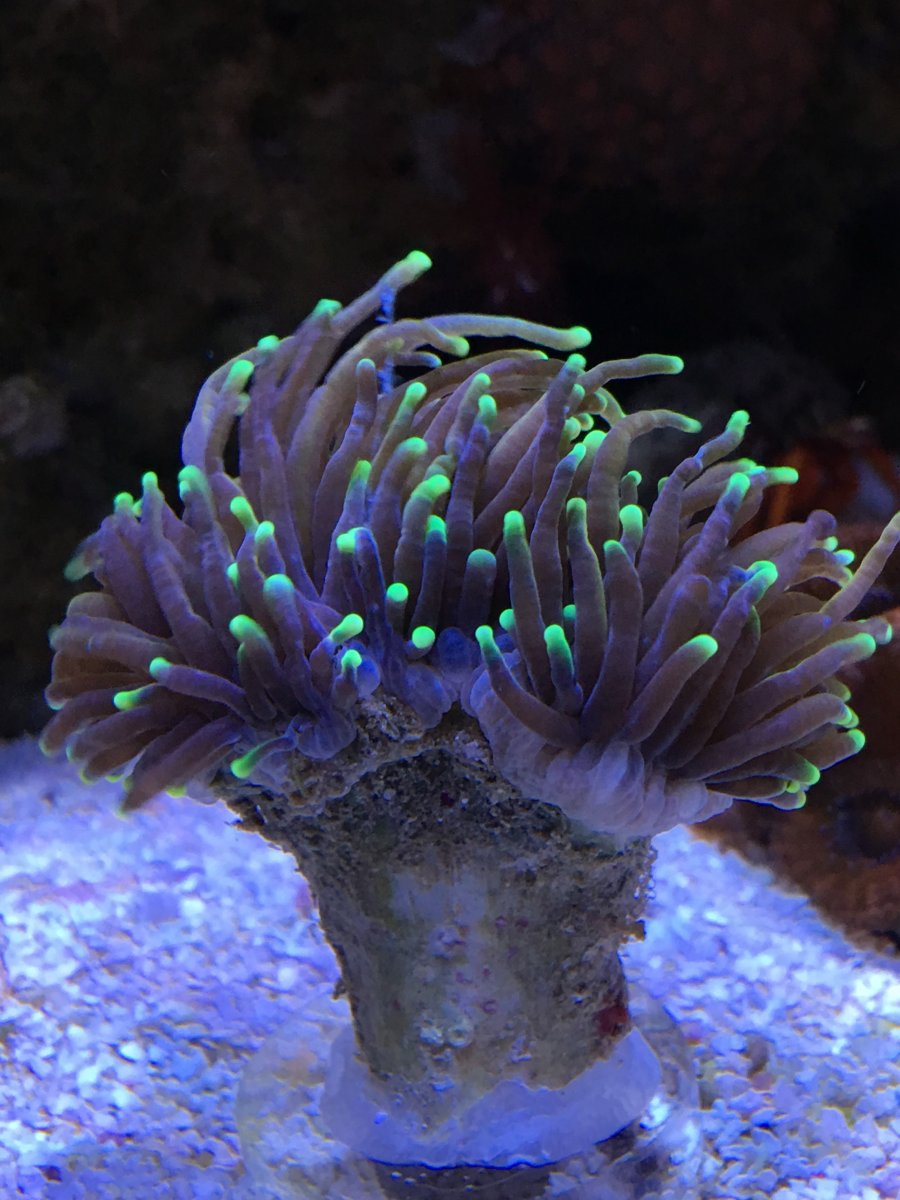 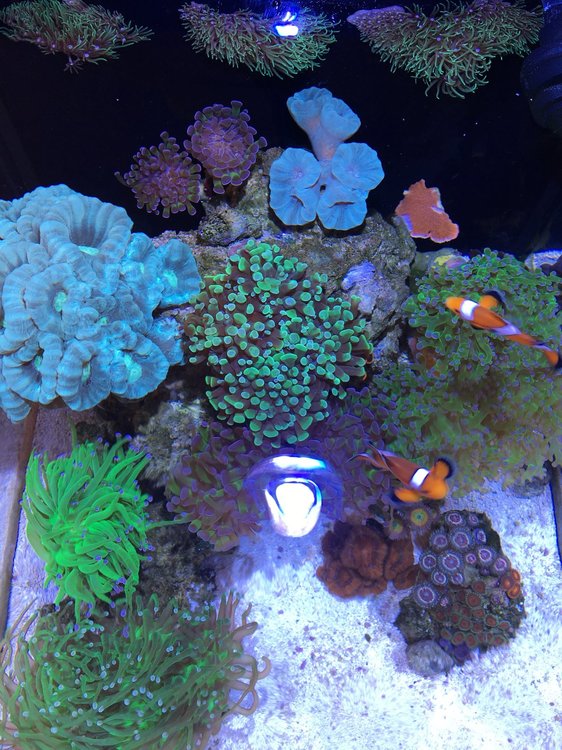 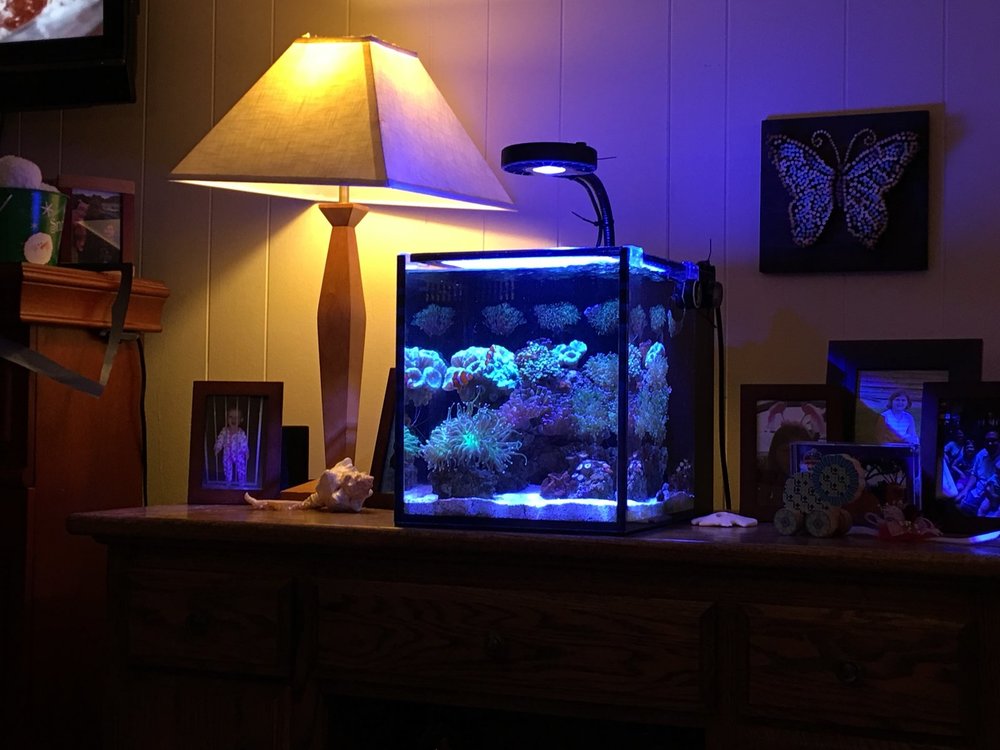 Picked up a couple new frags over the weekend. An orange Ricordea, green Pavona, and Duncan. Placed the Ricordea on the sandbed and hope to add more in the coming months.

As for the Pavona I know it’s green and my tank is full of green but I love their growth pattern. Planning on putting it on top of the scape. Quite possibly looking to get rid of some of my green Euphyllia and trying to find a more unique colored Euphyllia to put in its place. A peach/orange wall hammer would be awesome. 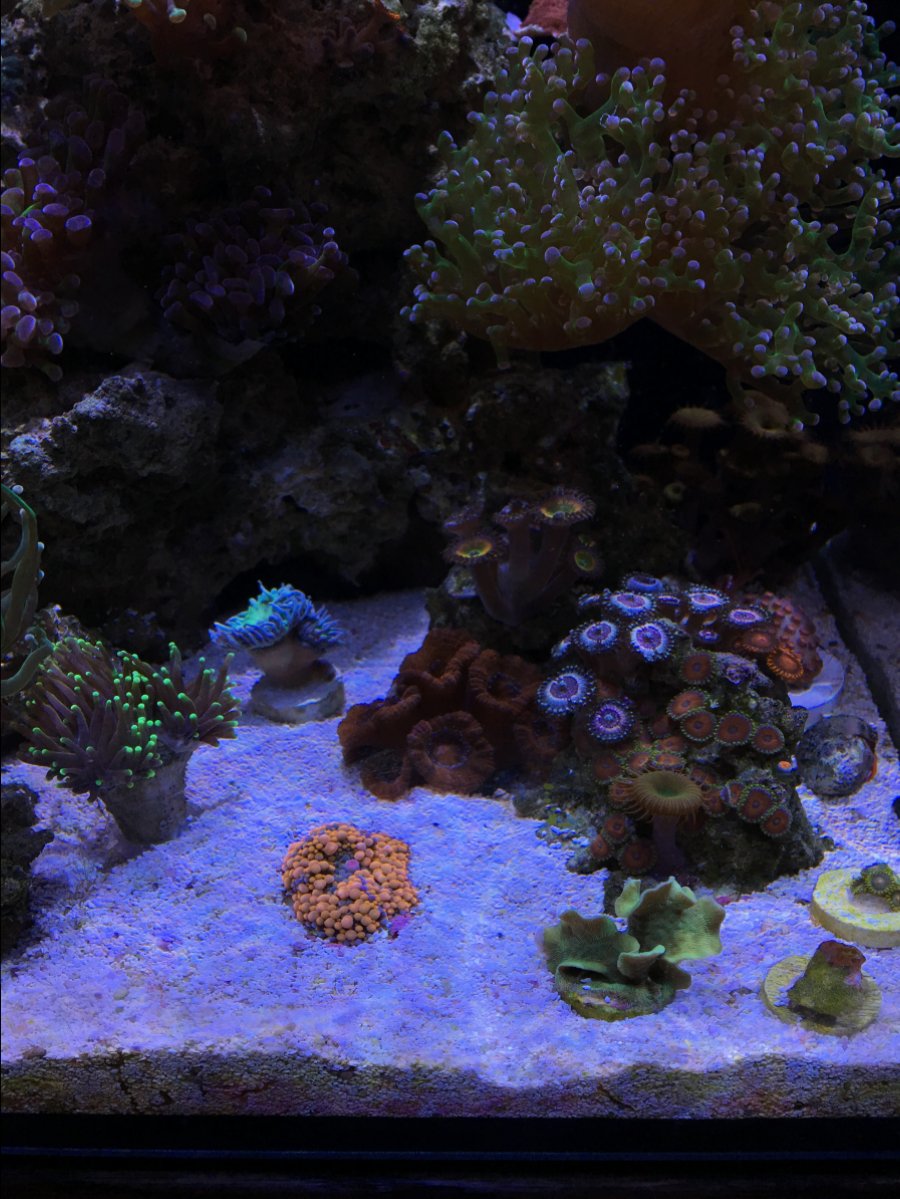 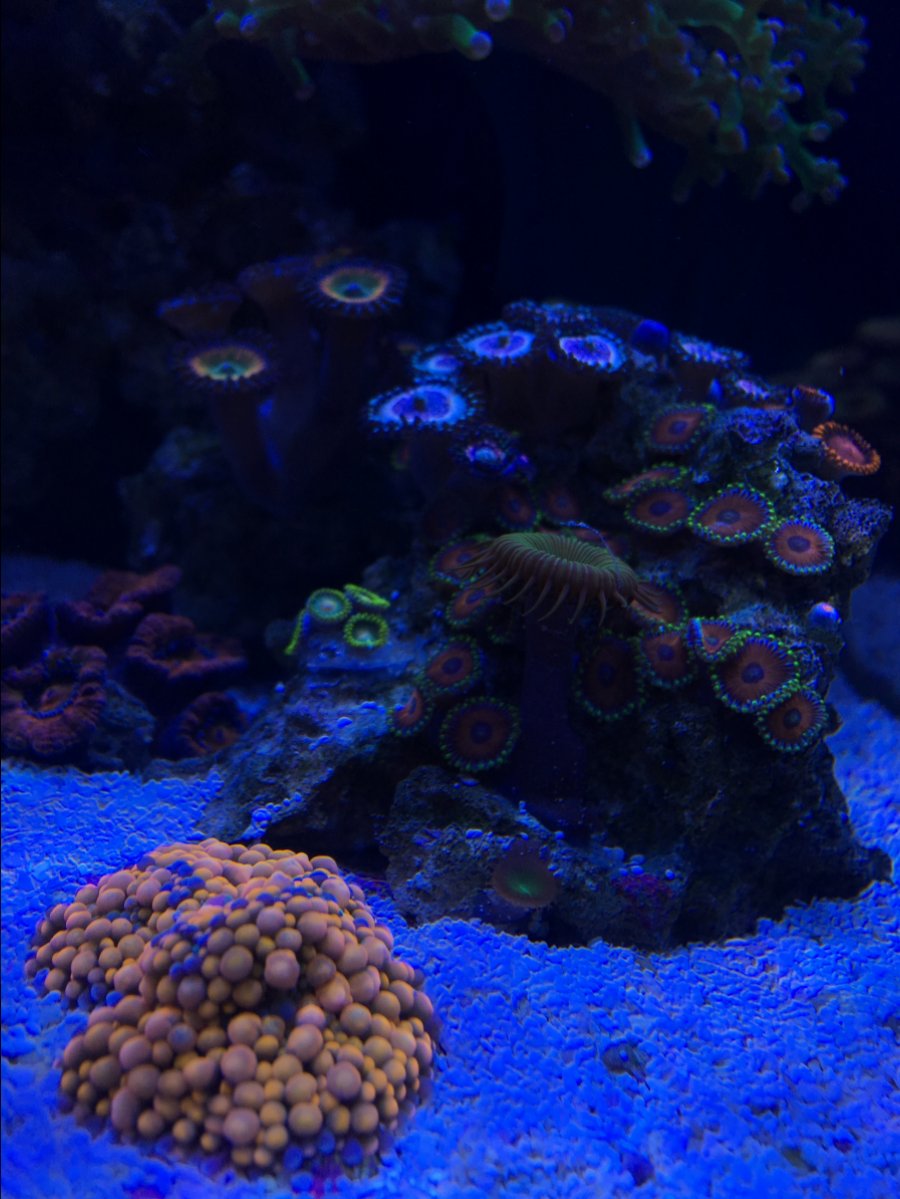 An exciting day with my reef. Its my nano's 1st birthday! 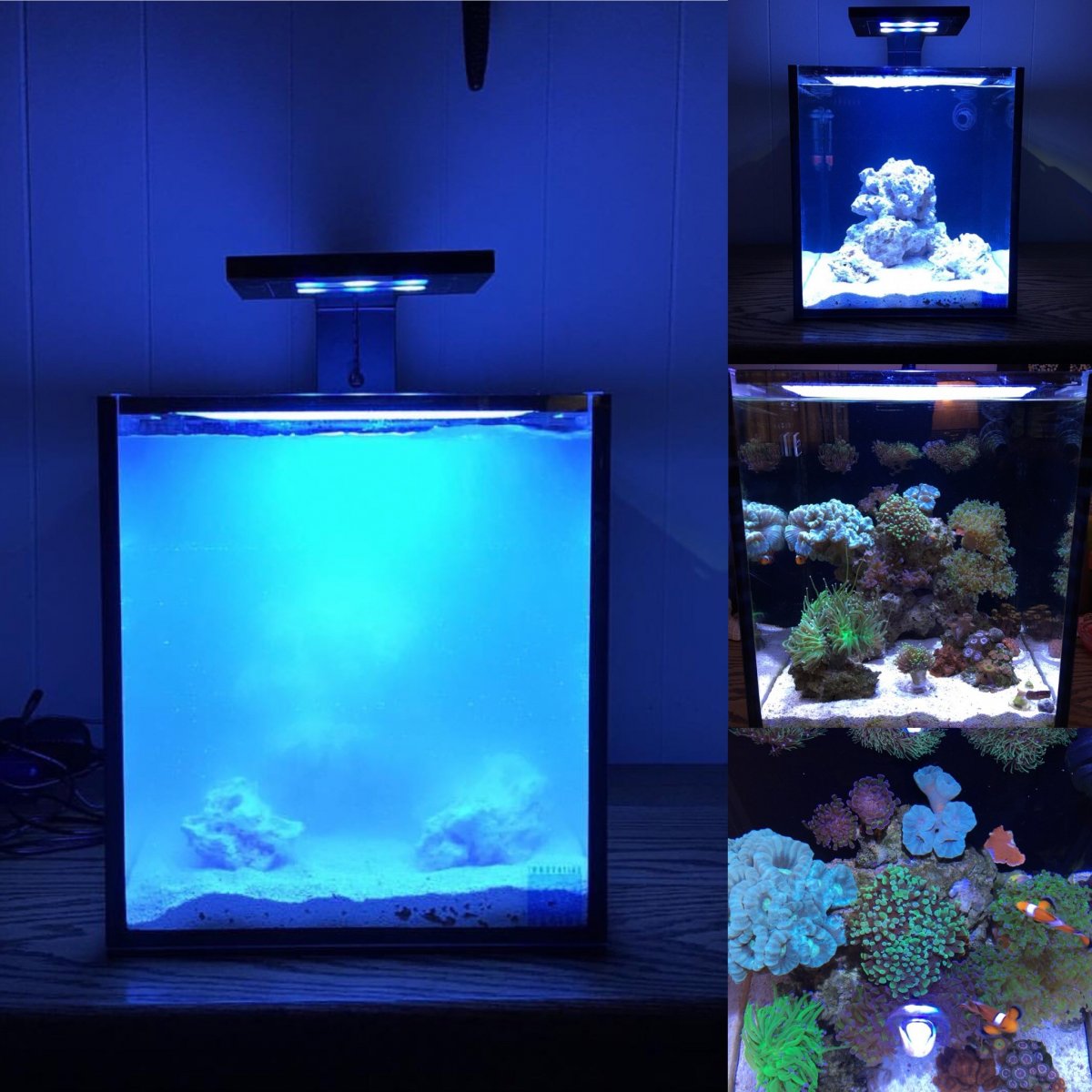