Work in progress, it is going to take a while to build this thread as we're talking 9ish years and 9 tanks currently supporting life. I should have this cleaned up by the end of sept. Obviously taking longer, let's shoot for the end of the year.

This is not so much of an extravagant build thread as it is just a thread with all my tanks. When I bought my house about 9 years ago I decided to get back into saltwater (hadn't touched since I was a kid).

I started out with a 29g JBJ nano. Which I'll talk about later. For now, I'm going to start small and work my way up.

First is my 10g nano which is my Hawaiian volcano shrimp (opae ula) tank. I've had these guys for several years now and have seen babies swimming around when I have the tank clean enough to notice. This is a fluval tank that probably isn't even heated anymore. Tank temp probably dips to 65ish in the winter. It has a cheapo led that I usually don't run anymore so the tank just gets ambient room light to feed the algae.. Maintenance, once a week top off, once a month unclog the pump which has some floss to keep from sucking up babies. Oddly enough, these guys love to explore the darker places of the tank. I actually bought another AIO filter chamber to put out in the open tank because they liked the other one so much and I couldn'tkeep them out. So this tank has anywhere from 20-100 or more shrimp. They are more brackish than full salt, but the chaeto doesn't mind. They mostly feed on algae, but every once and a while I'll toss in a treat. I do 50% water change maybe once a year (I'm currently behind sched).
one interesting fact about these shrimp is they can live for decades, but some cruel people put them in supposedly "closed eco systems" and sell them on amazon where they eventually starve. You can see mine have more than enough algae to eat off the glass.
With that, here is tank #1.

These are my newest tanks. You know when you walk into a store and they're practically giving things away? Well that's how I ended up with these. There is nothing special about these. My stock nuvo light went out in about 9mo on the 14 and couldn't find my receipts so I just use my Radion XR15 G5 blue straddling both tanks (still an overkill).

Inhabitants: 14 has a peppermint shrimp, hermits, snails, 2 or 3 sexy shrimp, pom pom/boxer crab (haven't seen it lately, but haven't looked either), about 8 different zoas and palys, some dragons breath, and some GSP. Forgot the purple ribbon gorgonian. No fish in this tank.

Up next, my longest running 29g that receives next to no maintenance...

So, as I stated previously, this is my first pseudo beer that started everything. It wasn't much if a success, dabbled in some SPS, nems, clowns, and gobies. I upgraded the LEDs as the stock light was lame. It has a skimmer, UV, and heater and is till running it's original return pumps (I do have backups as these have been running for like 8 or 9 years).

Inhabitants: Wyoming white clown, midnight lightening clown, yellow clown goby, a peppermint shrimp, a few money cowries, a few misc snails, a ton of brittle starfish, probably a few bristle worms, couple Kenya trees, some pulsing Zenia, a slew of shrooms (probably over 100), and two large BTAs. This tank is lucky to get 10g of fresh water a year and is very stable. I haven't cleaned the gravel in over 5 years. The nems are a little passed, i normally feed them pellets daily, but they got some shrimp last week and one took his food and ran. I think the midnight lightening may be getting a little rough with them as well, saw him pulling at tentacles earlier today. When expanded, they will stretch 6" up to the top of the water. The one thing about this tank is I'm fairly certain my clowns are both female.

This started out as my painted tank because it was shallow and I could get by with a cheaper light. I just refreshed this summer as it was getting nasty. It has current led and wave pump, an aquamaxx skimmer, and a cascade canister filter. Can easily do without this tank.

Inhabitants: blue dot goby, a peppermint shrimp, 2-3 welks, an olive snail, couple emerald crabs (1 is huge), and a boat load of Kenya that needs rehomed. It used to house my gold nuggets, but they got upgraded.

This one also had a restart this summer as the bubble algae just got out if control. My oldest fish have called this tank home at one time or another. It also runs a canister filter along with a ConeS skimmer and a UV. Lighting is also provided by current with a supplemental Hydor wave pump.

Inhabitants: several year old pair of maroon clowns, six-line harass, a 3+ yo fire shrimp, a colony of mini tube worms that established themselves from Fiji mud, and a 5-pack of natural split BTAs. Fairly empty tank that could be consolidated if not for the P I T A wrasse and the pair of maroons. As you can see, not much love going on with this tank either. It's probably over 30 years old and appears to have silicon failing in one spot. The clowns have laid eggs before, but nothing has made it. Now that there are nems, the male ignores the female for the most part.

Where this tank once stood were a pair of stacked 40g breeders as I was hoping for baby phantom clowns (never happened). I even housed my volcano shrimp in one of the 40s for over a year, but they didn't do well so I moved them to a 10. Anyways, this 75g was going to be my harem tank, but we're talking a couple grand in fish and nems to get that started so I'm slowly bringing it up to speed. The tank has an AIO box inside with an innovative marine skimmer. I just replaced my $20 (maybe even 20w) led this week with an APX9 which is great. This was a must as I just added a couple Sherman's a couple weeks ago. The tank has been running for about a year.

Quite an interesting crowd. The engineer started in my 10g fluval with a buddy that ended up jumping out. He then went to my 55 where he didn't get along well with the female maroon. So I moved him to one of the 40g breeders by himself where he experienced heaters that took hisbtemp down to the 60s and as high as 90. He's quite the trooper and is now about a foot long and probably 5 or more years old. He stays hidden by day and comes out to rearrange the tank at night. The Niger is fairly young and starting to develop streamers. As you can see, I have used this tank as a dumping ground for macro weeds. The engineer doesn't seem to mind the additional cover, but it does tick off the nuggets when it gets close to their pot. Since I added the nems, this male clown has also ditched his wife.

Two more to go (I think). But in the meantime, some of the supporting equipment for all of this is a 7 stage rodi which I upgraded because of well contamination (have seen ammonia from farm run off). I also have two 100g storage tanks in the garage for rodi and saltwater which feeds into the basement where my last two tanks reside. During the summer, my fish drink a good 7 gallons of manual replace water a week. During the winter it almost doubles since I run my house cold.

And then there were two!

My 125g I picked up used for $100. My intent was to circle back around to where I started when I was a kid with ordering seahorses from that back of a magazine. Unfortunately, this turned out to be a learning experiment instead as my poor saddled ponies eventually all succumbed to GBD. If I had it to do all over again, I'd go with a glass bottom. Anyways, this tank continues to run with a skeleton crew. It runs an Apex EL, a maxspect R420R 320w? led, Trigger triton 34v2 sump, eheim pro 4e+ 350 canister filter, Octo Regal 200S, aqua ultraviolet 25w, and a Korallin S1502 denitrator. This tank is kept under 74 degrees which was for the ponies health. In about 2 years I think I've only cleaned the glass once. The water is not changed or even tested at this point.

Inhabitants: talk about overkill, I'm down to a male biota Mandarin (female disappeared) and a yellow watchman goby for fish. I haven't given up on the seahorse stable yet which is why I've added nothing new. Previous inhabitants included 4 saddled seahorses of which 2 were pintos and a diamond goby which is now in the 75 after getting a little defensive around the seahorses. This tank also has an assortment of scarlet reefs hermits and snail to include a couple fighting conchs. There are also a few gorgonians and a couple kenyas.


Last but certainly not least is my 220g. I had gone to a pet store and saw a leaky tank and stand for dirt cheap. My plan was to strip it down completely and reseal the entire tank. Got it home and off the truck by myself, but getting it safely on the ground was a different issue. I had it sitting on a 100g Rubbermaid stock tank. As I got an end within inches of the ground the stock tank slipped out and the bottom of the tank landed on a 2x4 and sealed its fate. Nothing like the feeling of that happening to you. I was devastated, but not done. So I went back and bought a brand new one within a week. This time I had help and plungers to get it safely in the house.

Setup: my plan was to maximize swimming room with a few places for corals. So I picked up some Marco pedestal rock an started cementing together.

Softies:
Couple toadstools
Finger leather
Cabbage
GSP (starting up a GSP back wall)
12" CC Inferno nem. Has been in my tank for around a year in an acclimation box, clowns haven't found it yet. Split in Oct to 3.
Purple plating sponge
1 Rainbow Ricordea mushroom
1 Indo Superman mushroom
1 little Kenya tree that is growing back slowly.
5 different zoas numbering in the hundreds. Black storms favor the purple people eaters. 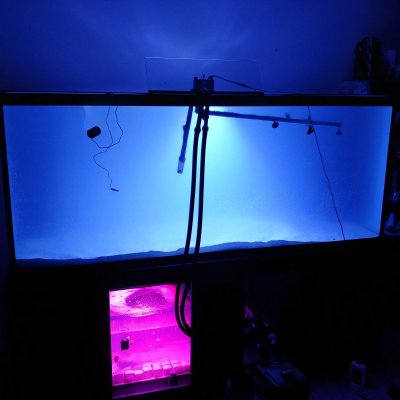 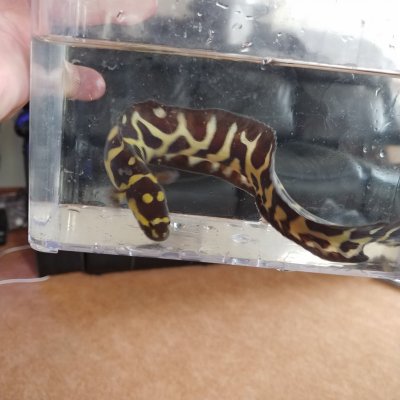 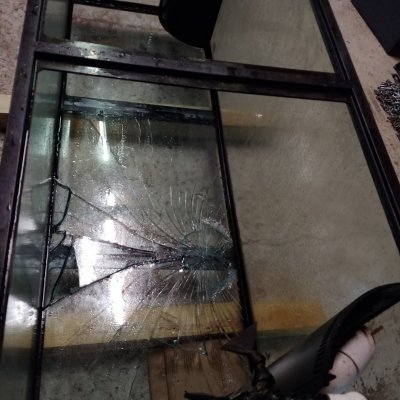 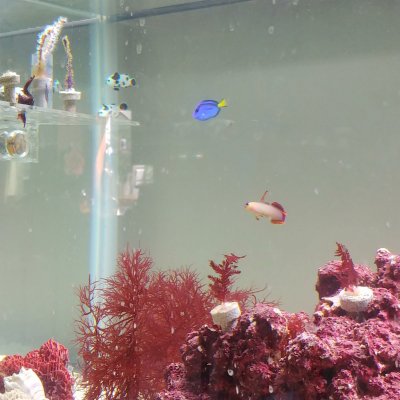 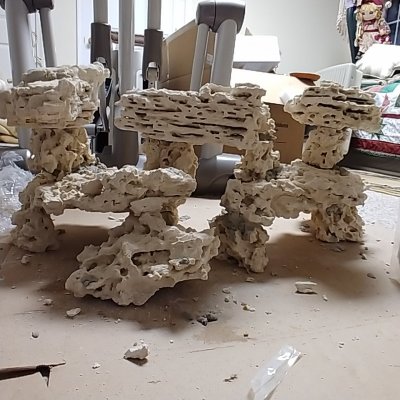 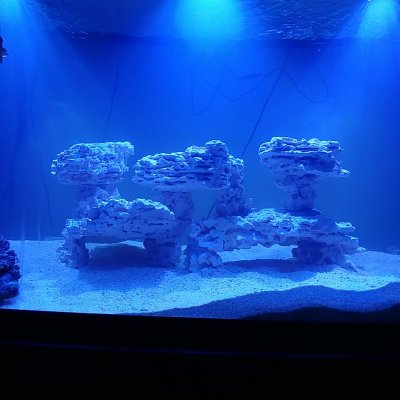 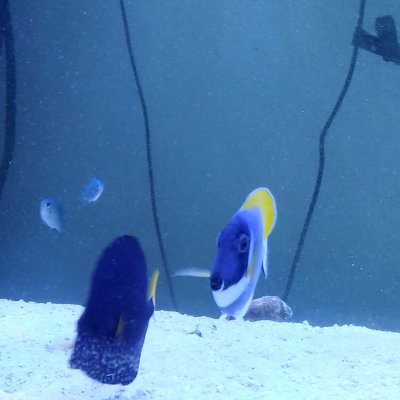 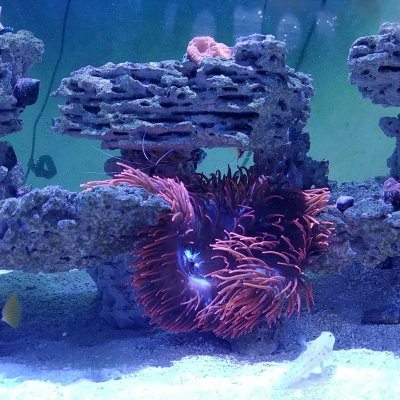 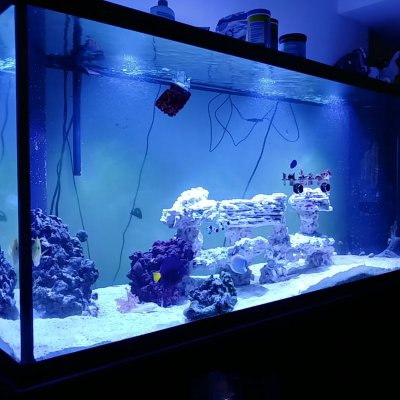 Build Thread I need serious help with my build.

Build Thread A proper introduction for myself and my builds