Honestly I think the heavy blues are for us and how we perceive the coral’s colors with them.
S

minus9 said:
6500k freshwater T5 bulbs are overlooked as well.
Click to expand...

The aquablue special has almost all the blue that the blue plus does, only adds some whites too. 65k are good to but I found they are best when mixed with blue plus to get the added blue peaks.

The response to light spectrum is species specific and likely varies at the genotype level as well and I wouldn't be surprised if differetn clades of zoozanthellea also influences growth. Like everything else in life it doesn't matter what you do somebody won't like what you did.

Mine is balanced between the 2. 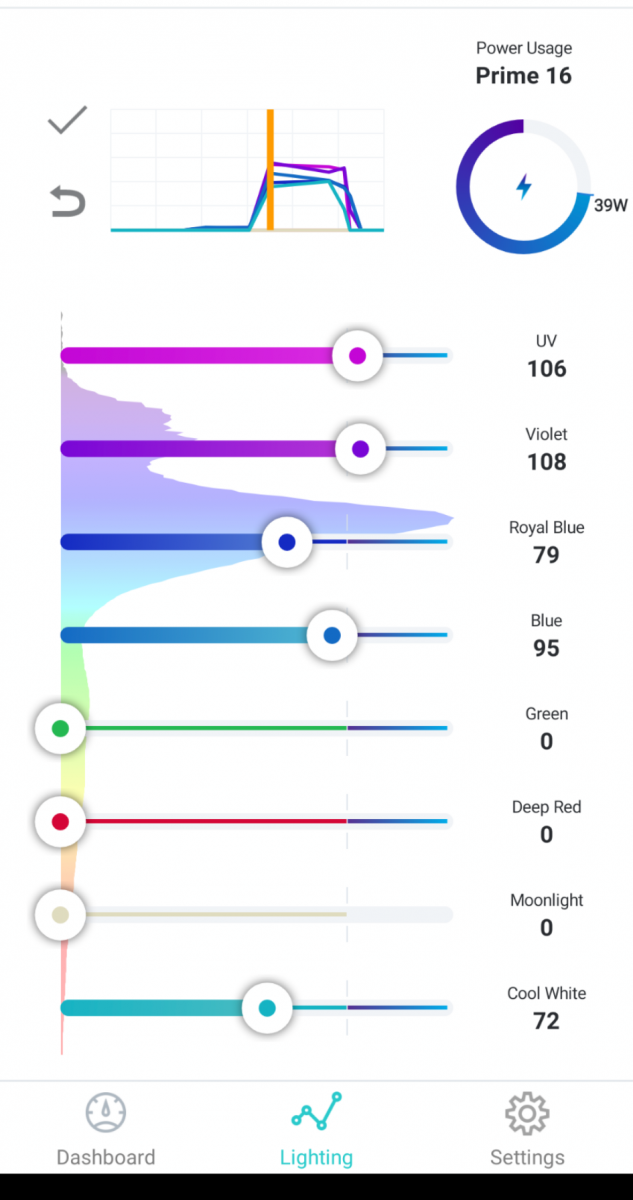 This is the preset schedule on the app for my Aquanest Lights for SPS, and LPS from the manufacturer. I have yet to turn on my lights on my new tank. I have yet to decide what to do. I am intending to get an Apogee Par meter, and measure my existing tank, where I got lucky on the settings 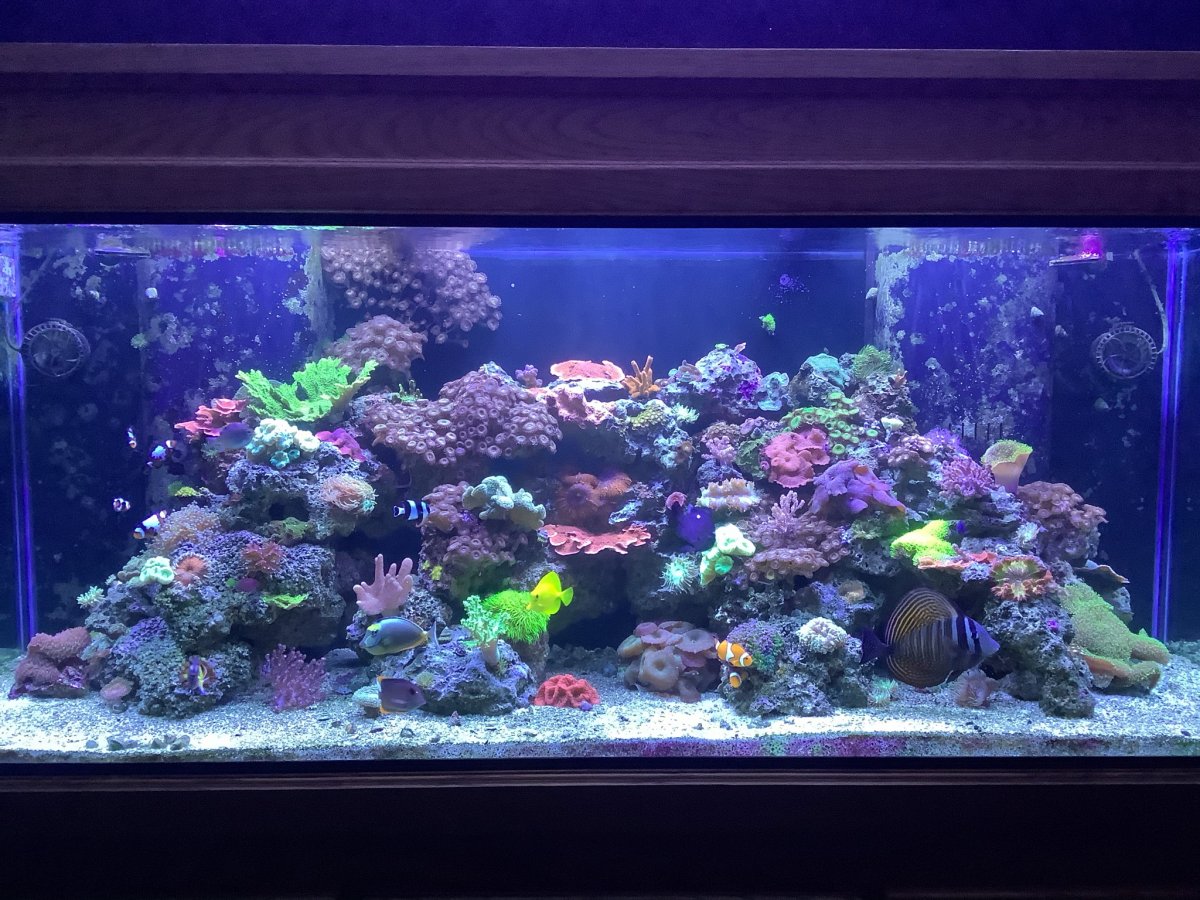 I honestly don't think their is a ratio of blue and white lighting when it comes to the growth, and more importantly, the health of the corals. Each tank is different, and thus, the percentage of lighting will be different.

revhtree said:
Today we know differently but what exactly is the BEST percentage combo to experience the best coral growth from a lighting aspect?
Click to expand...

Do we really know that? I´m not so sure on that - what I´m sure of is that it often see this claim here on R2R - but have not seen any investigations that really show it.


ReefGeezer said:
Corals really don't use much of the yellow and green in the middle of the spectrum.
Click to expand...

Look at this photos. They show the top side and the underside of a leaf from a pot plant illuminated from the top side by an LED flashlight with white LED (phosphorous coated). The top side get hit of all type of photons between 400 and 700 nm (photo 1) - the underside is only green (Photo 2) it means only green photons pass through. it should have been white if all photons had pass through in the same amount they leave the flashlight. If I use a light on the top side - the backside is total black - no photons leaving the tissue. If I use a red LED - the backside is red - but rather weak - not all red photons will be assimilated - some penetrate. 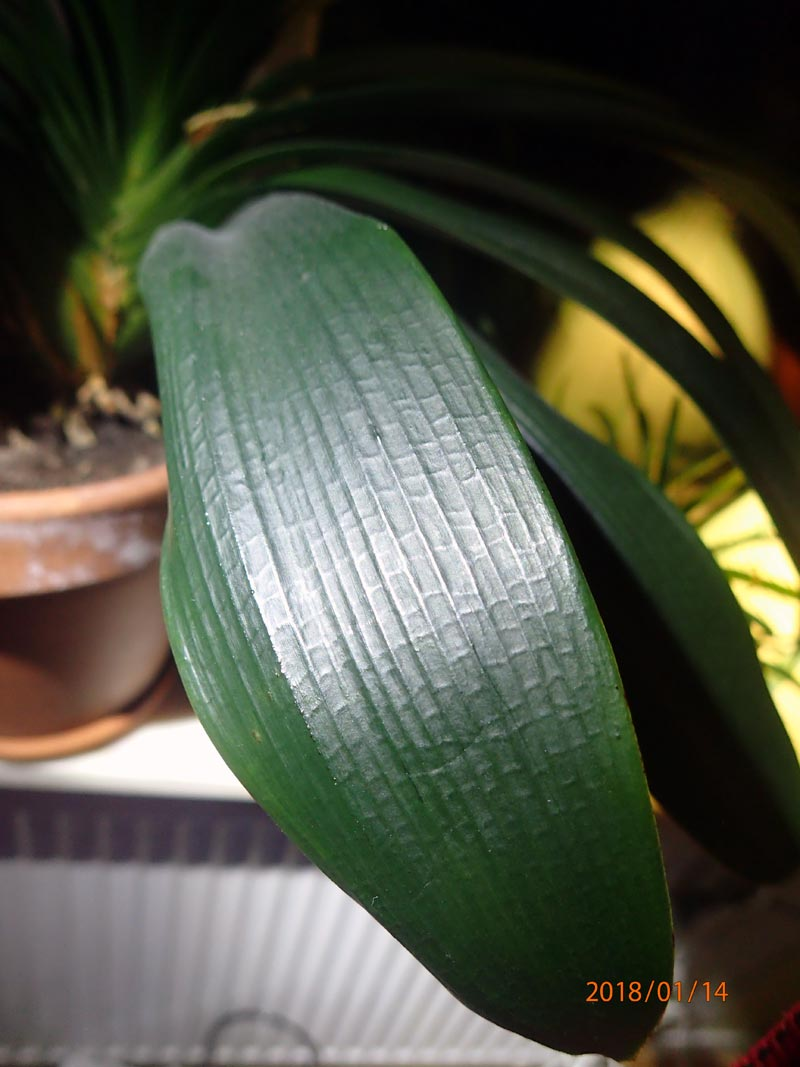 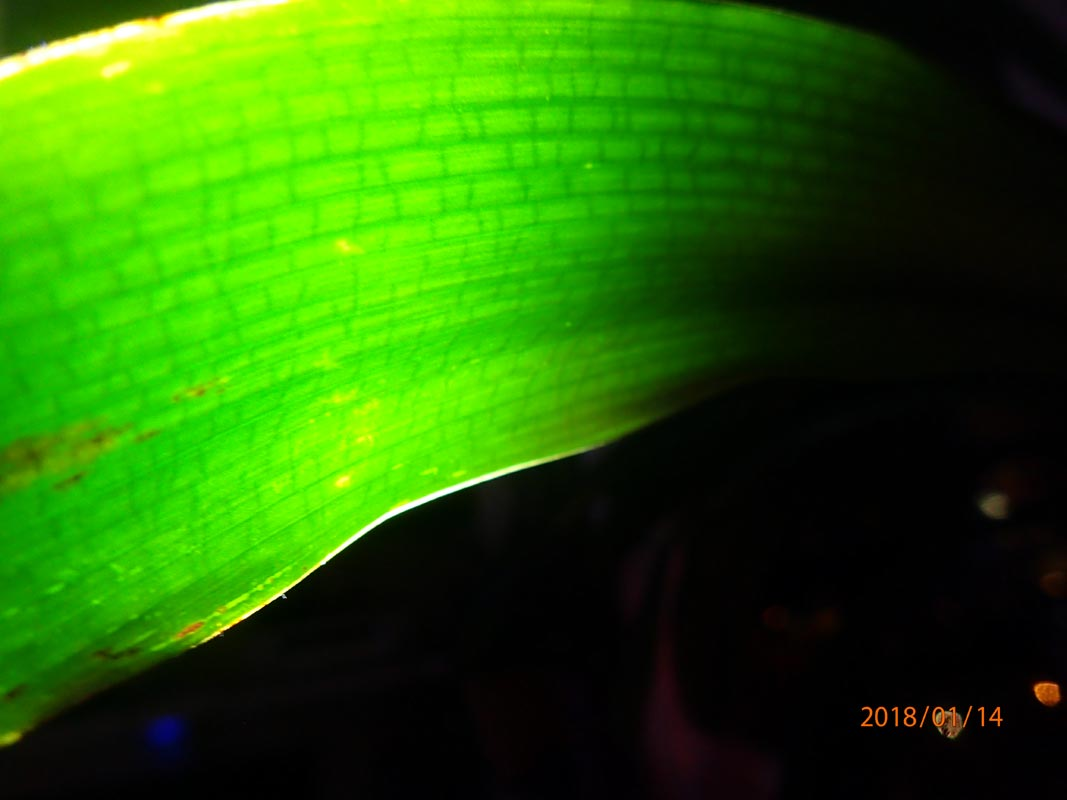 ​
This means that green light penetrate living tissue in a very good way. It means that even if green photons do not give so much photosynthesis in a single plane - it can promote photosynthesis deeper in the flesh. And there is a lot of green photons down to around 200 m. Green penetrate as good as blue wavelengths in water. Is it just a coincident that many of the "fleshy" LPS comes from rather deep water? Look at this picture (source) 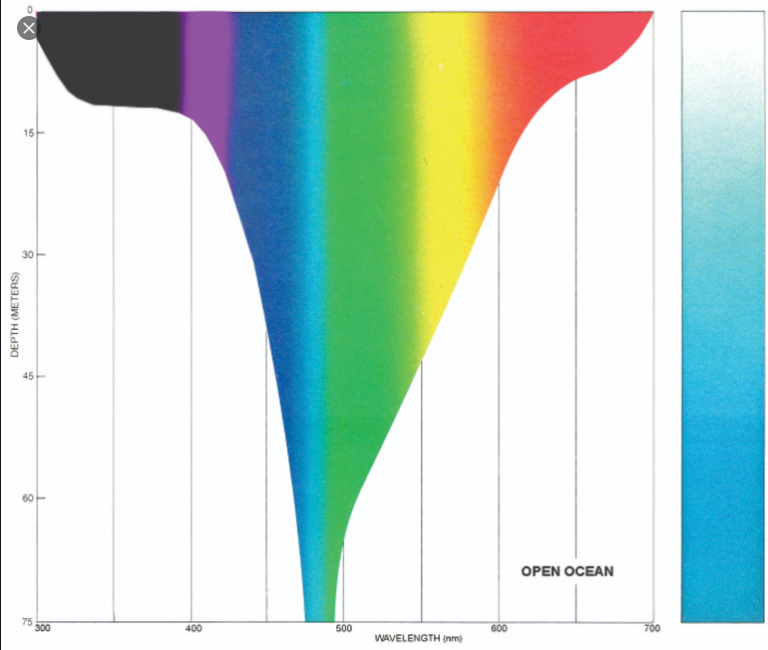 ​
Interesting here is that UV-A and violett is shown to have as bad penetration as red - but still we think they are more important than red wavelengths. They probably are - but not according to growth. On the contrary - at least UV-A can be very damaging to our corals but (or probably because of that) they have trigger a feature among most corals to develop proteins that serve as sun screen. This proteins is pigments and we see the corals as more colourful than those there this sun screen production is not triggered - at least this is the most dominating theory for the moment. It seems that red wavelengths not have this ability to trigger production of sun screen proteins and because it in the same time is the most effective wavelengths for photosynthesis - you can easily burn everything like an englishman the first days on a spanish playa. In nature - red will never be alone - as you see in the picture above - it is always has its sun screen protein trigger with it in nature. When we use LED - it is on the other hand easy to overdo the red wavelengths bit - IMO - we combinate Violet and UV-C wavelengths with red - we will have the same effect on growth that is shown up in swallow lagoons in nature. And also green for the more "fleshy" corals.

The low use of green photons and the ability of green photons to penetrate living tissue is the reason why you still can have photosynthesis in trees and plants below a nearly 100% canopy cover.

I think people over think this. The actinic range is complicated. Are we talking Windex blue, royal blue, near UV? As long as you have some red, some blue and enough over all PAR, then the balance should be more about what looks good to you. Even within the actinic/UV range, there are stark differences in what colors are brought out in corals, but they are all beneficial for photosynthesis. I say just invest in a descent par sensor, find a balance that that looks good to you and allows you to enjoy the fruits of your labor while providing adequate PAR for healthy growth.
Last edited: Jun 13, 2021

ReefGeezer said:
Not as simple as Blue vs. White. White light is made up of all the color spectrums that include the blue spectrum. Generally speaking, the most beneficial light for corals and their zooxanthella is light in the violet to blue green portion of the spectrum (that includes blue) and a little in the red orange to red spectrum. These colors are at each end of the visible light spectrum. Corals really don't use much of the yellow and green in the middle of the spectrum. Unfortunately, there is normally a lot of those in standard white lighting. It may be that the benefit of using white light is just to replace the red spectrum that is missing from blue lights.
Click to expand...

Red doesn't seem to be something corals prefer plus it barely penetrates water and those who receive red light are likely closed up and in photoinhibition during those hours of the day to protect themselves (I imagine red is barely scratching the surface during non peak hours of the day).

Take a minute and figure out what this chart really says according the penetration of different wavelength. the black circle will make the windex look. You can´t role out red just because pf penetration - when you need to tole out the windex wavelengths too. An in nature - its a lot of corals 10 m and up

I think a better question is what color light is best for the fish's behavior. It seems the blue is set and people vary the white by their preference. I used to run only blue, but then was concerned that I was providing an environment that is extremely abnormal for the fish, and that I bet that there are interactions between the light color and the behavior of the fish given that they have the capability to see a wide range of colors.

Lasse said:
Take a minute and figure out what this chart really says according the penetration of different wavelength. the black circle will make the windex look. You can´t role out red just because pf penetration - when you need to tole out the windex wavelengths too. An in nature - its a lot of corals 10 m and up

I never really said anything about UV-A but I do know what you mean by many hobbyists thinking UV might be helpful. I don't think UV-A is important in photosynthesis as most photopigments that I know of are not very excited below 380nm. A lot of corals that are in very shallow waters are protecting themselves from extreme par numbers during the day and are often much smaller than those further out. The area where red is present leads to many corals only being able to photosynthesize at dawn and dusk. Chlorophyll a and c2, for example, support the idea the algae is very much utilizing the light that penetrates the deepest other than the some green but that may be due to solving physics issue with energy variation (sci show did a great episode on that). The reason why red may be utilized by chlorophyll but not the algae in corals may be a retained ancestral trait of zooxanthellae ancestors before they began their mutualistic relationship with corals. 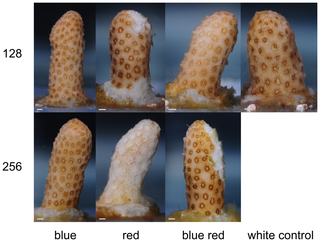 Light spectrum plays a key role in the biology of symbiotic corals, with blue light resulting in higher coral growth, zooxanthellae density, chlorophyll a content and photosynthesis rates as compared to red light. However, it is still unclear whether these physiological processes are... 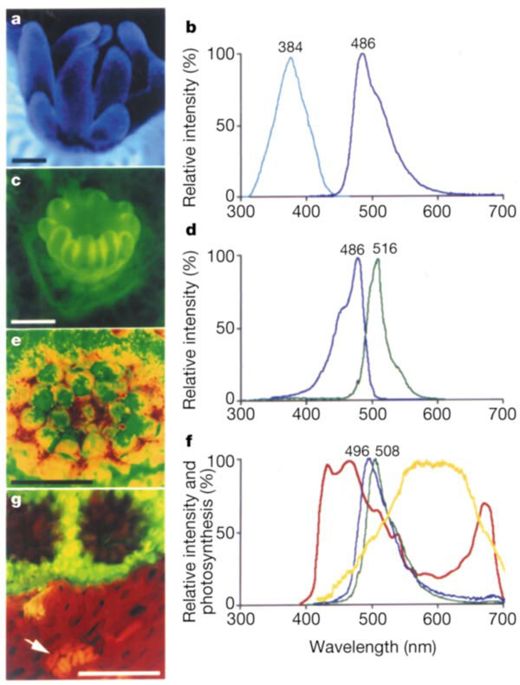 All reef-forming corals depend on the photosynthesis performed by their algal symbiont, and such corals are therefore restricted to the photic zone. The intensity of light in this zone declines over several orders of magnitude—from high and damaging levels at the surface to extreme shade...

The Wijgerde article is interesting but IMO it is possible to interpret the result quite the opposite. The zooxanthellae density as one example. It is possible to say that the red wavelengths is so effective that the job can be done with fewer zooxanthellae. The zink concentration could also been a factor in the experiment.

I have my white start at 10% for a few hours in my light cycle and then have it drop to 0% over the course of 2 hours.
T

I do about 65% blue and about 15% white. All the others I do at about 9%. Been doing this a couple years and feel it has a good a balance of growth and minimal to no algae.

I run a hybrid. I have tried many different color combo’s for the bulbs. I find my favorite is all ATI blue plus and my kessils at 60% intensity and 50% white at the peak.

It is aesthetically pleasing and the corals seem to really like it. All the frags are showing good growth and color. 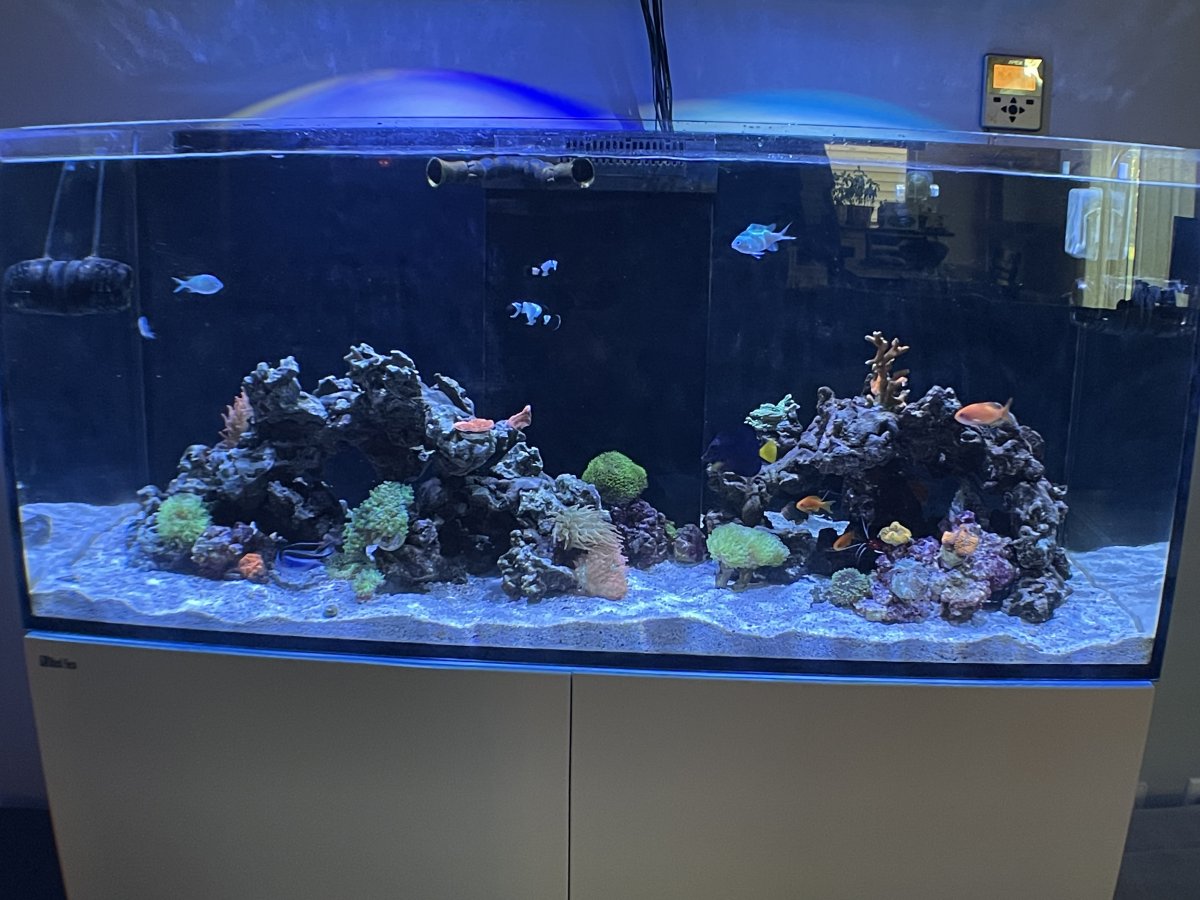 QUESTION OF THE DAY Coral with the BEST color and what's your favorite coral color?
2 3 4

New to corals and anemomes, What is the best lighting?