So, this is my build thread. I am going to be putting together a 55 gallon cube, a 40 gallon breeder and a home made 40 gallon cube. ANd the sump might be home made too.. Its all just getting tossed together as a single unit.. so to speak. They are going to share water through a shared sump.

It's not that hard to do. I look forward to following your build. 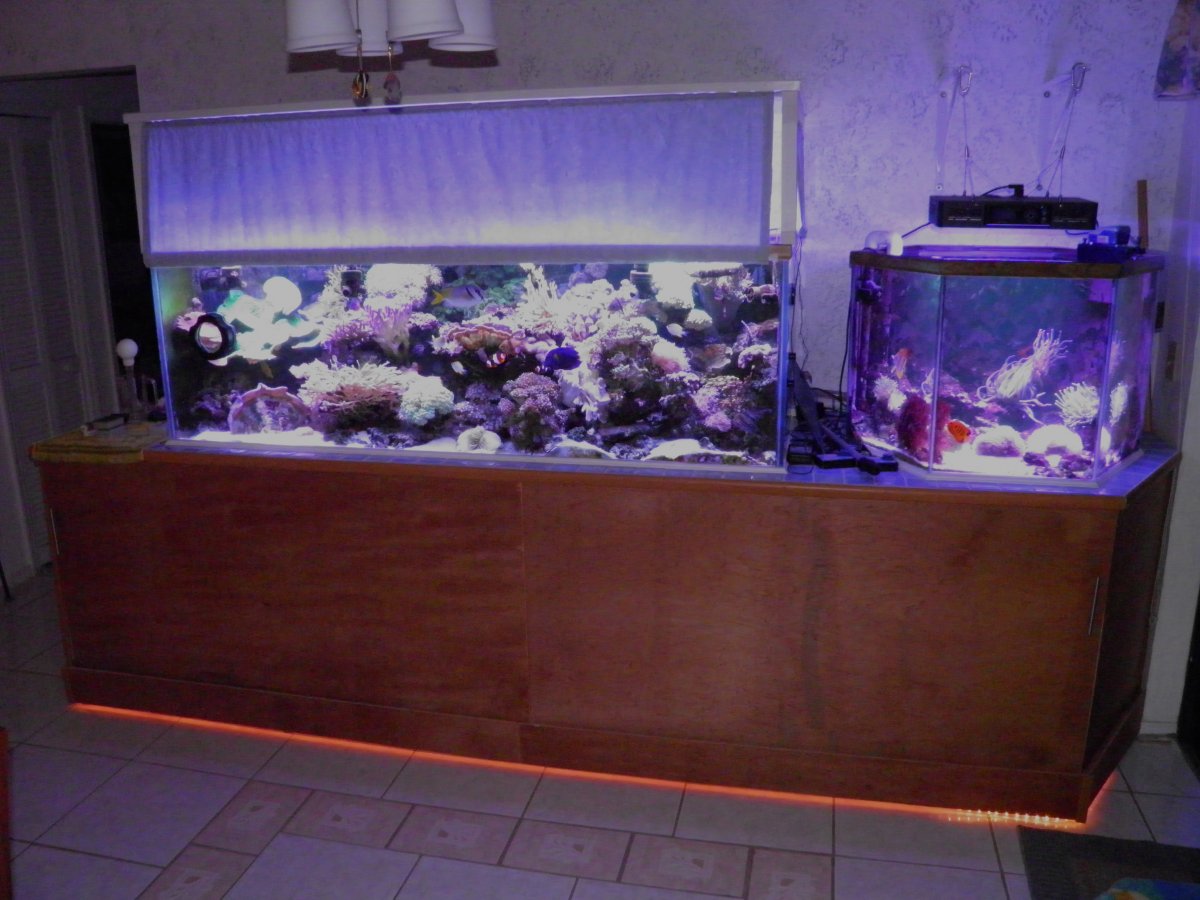 Ron Reefman said:
It's not that hard to do. I look forward to following your build.

Very nice! I plan to do something similar but a little more utilitarian.. ( defined as cheaper) basic 2 x 4 framing stand painted black and going into the basement. 66 and 24 inches long x 24 deep and 34 high, connected for stability. Pics coming soon...
OP 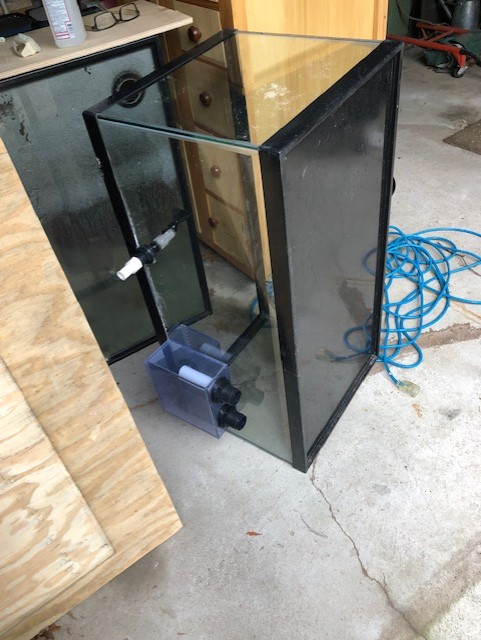 Here is the 40 B with my self made overflow box. It is a double 1 inch drop with a 1 inch outflow from the tank.. It is what I had on hand. 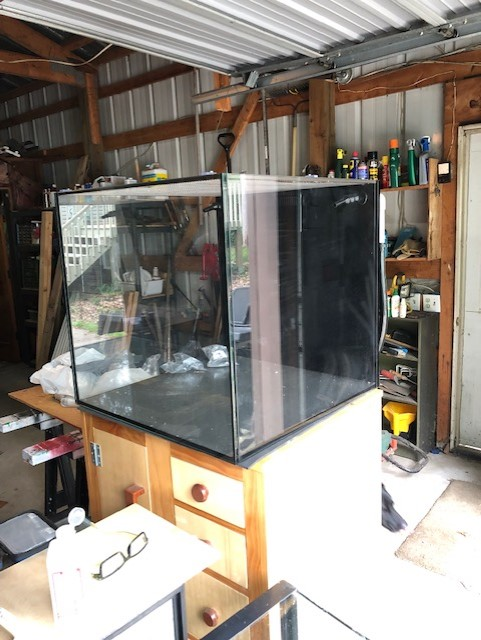 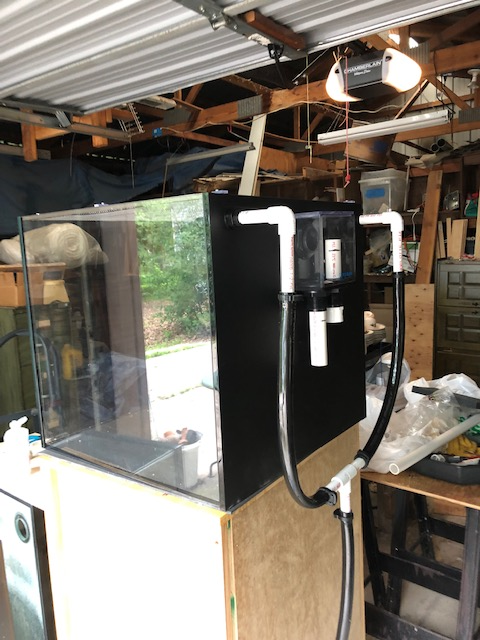 Here is the back of the Cube.

Your work so far looks good.

OK so some history and my plans for these tanks....

I started keeping fish on a regular basis back in the 80's. Did a few single tanks in the 70's too including a salt fish only. I recall a Hawkfish.. and a Sebae clown. Iknow there was more but dont remember. In the 80's I bought a house and set up about a hundred freshwater thanks in my basement and started breeding Angels. Got bored with it and diversified.. I like breeding all different kinds of freshwater. Eventually I ended up with a 125 and a 29 as reef tanks.. Loved them.. BUT then this divorce thing happened.. ahem.. twice and decided to move. At about 1999 I set up a new fish room.. I did one small 40 B reef tank too. in 2008 Unemployment put a kabosh on my fishkeeping. SO .. in 2018, I started looking at reefkeeping. Bought a 75 reef from someone I knew. Had to move it in stages as I was not fully ready for it.. set up a 40B and a 75 for the contents and then moved the tank a month later. Thanks to the owner for allowing me to do it this way..

Well.. So I have 3 reef tanks up and running.. Have had some problems but am overcoming them slowly.... remember bad things happen fast and get fixed slowly.. or something like that.

This build is going to be a 54 cube and a 40 B and I have abandoned the idea of making my own cube. So I have a 24 x 24 inch section of rack that I need to fill . The current 40B and my old Oceanic 75 will be coming down to make room. So I will be doing this in stages to a degree but have to have 2 tanks back up by November. I can show you the frame for the rack.. I have painted it black. I am more into utility than I am decorative. I will be covering the sump area and again painting it black to match.. They will all share a sump. The cube will be bare bottomed and the 40B will have sand (or aragonite) for some wrasses I have that could use it. The sump is a DIY project and the skimmer will be a heavily modified old SWC. I am toying with a DIY calcium reactor but dont have enough corals to justify it yet. so thinking Kalk reactor first and then adding a 2 part doser.. Would really like some Neptune stuff but.. hey money has to happen first.

Here is the next update. Have the rack built but not finished. 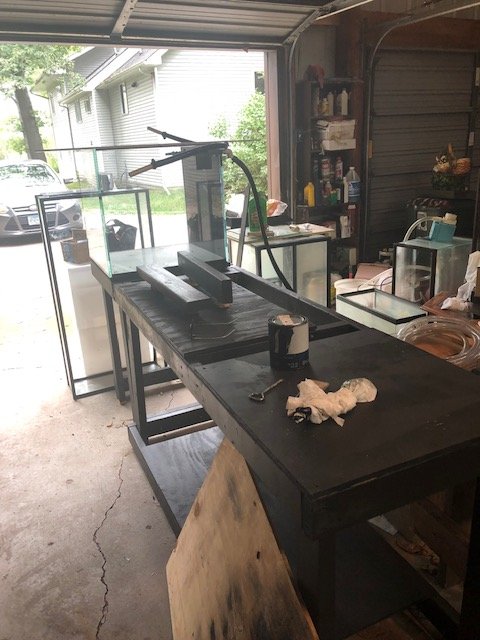 One home made Overflow. Edges are rough but it don't leak.. 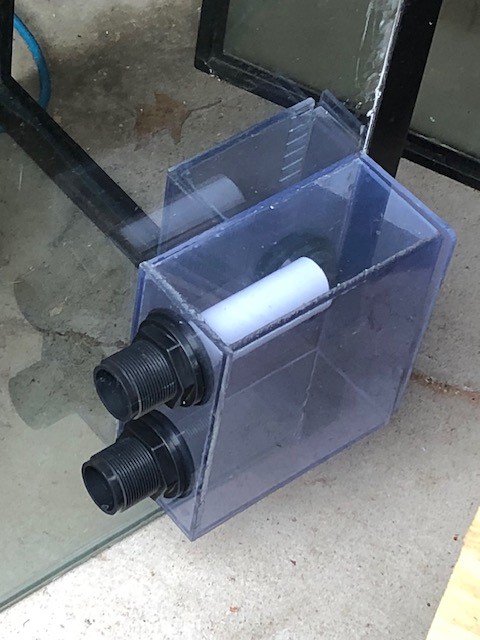 And the 40B it is attached to.. AM learning a lot about acrylic with some of these projects.
Last edited: Sep 30, 2019
OP

Finally getting the Plumbing done on the Cube. I dropped and broke my homemade Overflow box for the 40 breeder so will have to find a replacement.. if Anyone has one they want to get rid of.. Let me know. 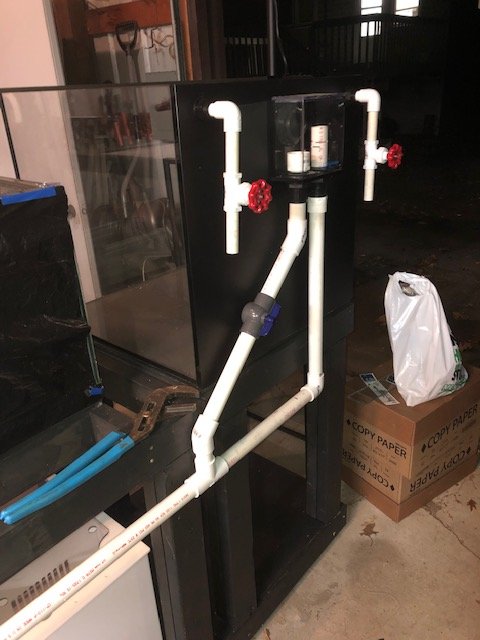 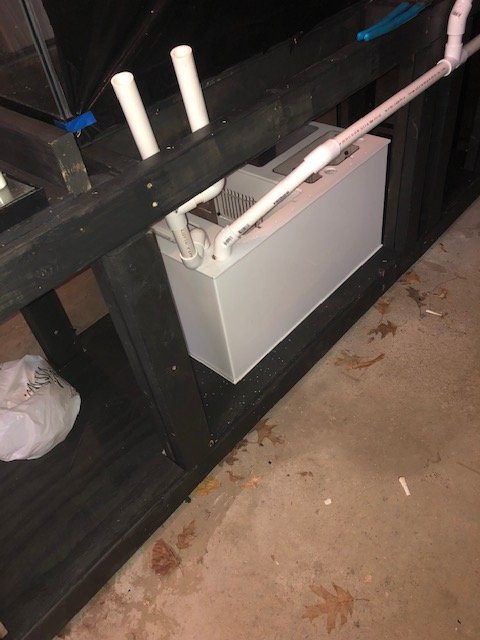 After several repairs to the overflow on the 40, the leak testing begins.. 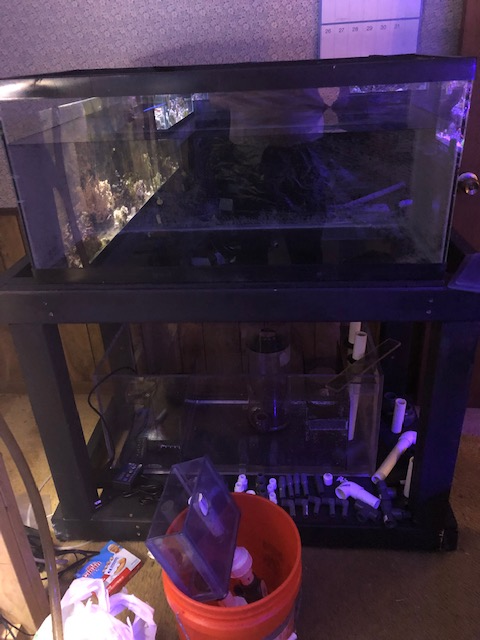 Repairs to the overflow are good so time to set up my control board... here are some of my new toys..
I won the Apex from the local TCMAS raffle in October. What a score that was. I should also mention the Apex sponsor was New Wave Aquaria in Minneapolis. 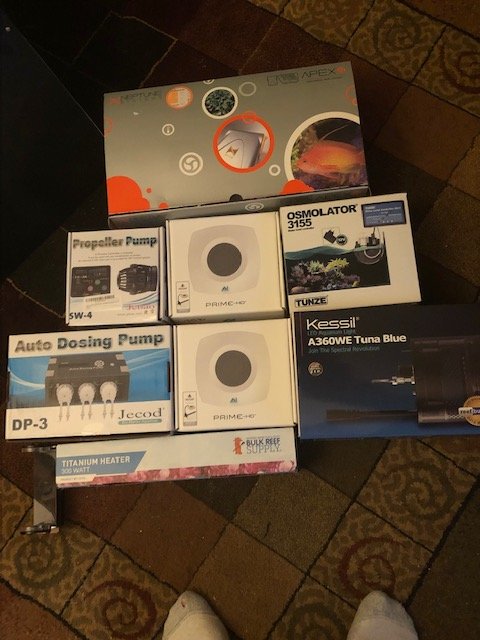 I need to update this more often. This is going much slower than I had anticipated. Several setbacks with my home made overflow on the 40B. Much leak fixing done. I have had to modify my sump a few times too. Funny how you forget things like water levels when installing baffles. Not leaving enough room for a heater. Then changing to a different sump altogether. and then changing again.... and then again.. Decided to go with my homemade sump for certain now. The Fiji Cube I have is too limiting .

Wish me luck as I try to put saltwater and rock in it within a month... Yes, Finally going to NOT be dry.. I should show the tank it will replace.. maybe???

I guess I want to get this right.
OP

I am going to be setting up a bare bottom ULM style cube myself as part of this build. (See BRS ULM successes and failures vid recently published) I have a lot of established rock BUT.. one thing I am or have been getting started is using a couple of media reactors and establishing some aragonite sand in them. I will be putting about an inch of bottom of the tank sand in them and running them as a rapid sand bed in the sump for 6 months or more till the system gets established. I plan to put some cheap sticks in this tank from the start. such as purple stylo and pink birdsnets. then adding something I really want at about the 6 month mark. I will also be connecting this via sump to an already established bare bottom 40B, which is also part of this build. Any comments on this method are appreciated.
OP

Nothing but trouble with my 40 build.. chipped the front class on both sides. dropped the overflow box twice now.. fixed it and then dropped it again.. time to change gears on the DIY box I think.. Finally got the last couple pieces of gear.. ATI light for the cube, the return pump .. Sicce 7.0 ADV and a Reef Octopus 150SSS. Cant wait for delivery to finally put it all together.
OP