I haven't even been in this hobby a full year, and am already on my third tank (sort of). I started with a 30 gallon long and loved it, but it sprung a leak a week after my first child was born, so I basically just dumped everything into my "hospital tank" and have left in there. I recently got a good deal on a Marineland 60g cube with a stand and sump and some equipment. It also had some live rock and two fish with it.

I didn't want to just dump the fish, but also don't think I'm going to keep them. I'm still not sure. One is a coral beauty and the other is a Kole Tang. I know the tank is too small for the tang, I'm still waiting to see if the coral beauty nips at corals.

All of the coral is now in the new tank, so I'm going to turn the 20g back into a quarantine tank and hopefully start getting some fish! I could use some suggestions, I don't know why but I'm having a hard time making decisions with this tank! My wife wants some clowns, so I guess I'll get those

I immediately upgraded the drain to a herbie overflow, amazing how quiet it is. Also have a LED grow light from a freshwater aquaponics tank I had, so I threw that on the sump and plan to get some Chaetomorpha. I've never had a sump so this will be fun for me.

I have an IceCap Gyre 1k from my first tank...I'm having a hard time getting the flow just right with it but I'm trying not to have to spend more money at least not right away.

Running a hydra26 for lighting. Seems to be enough.

I loved the aquascape, but kind of wish I had built it higher now. Maybe I can build onto that later?

Anyway, here are some pictures, tell me what you think and give me some suggestions on livestock and anything else! 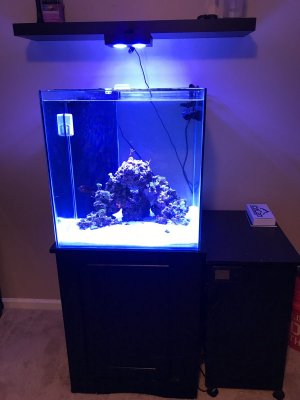 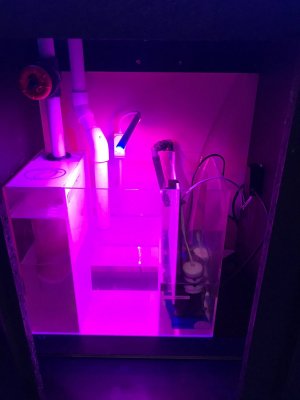 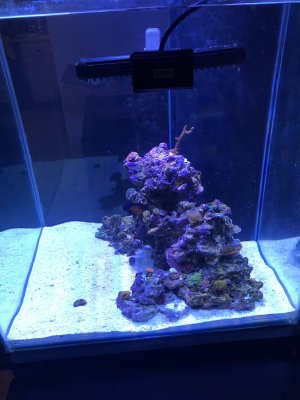 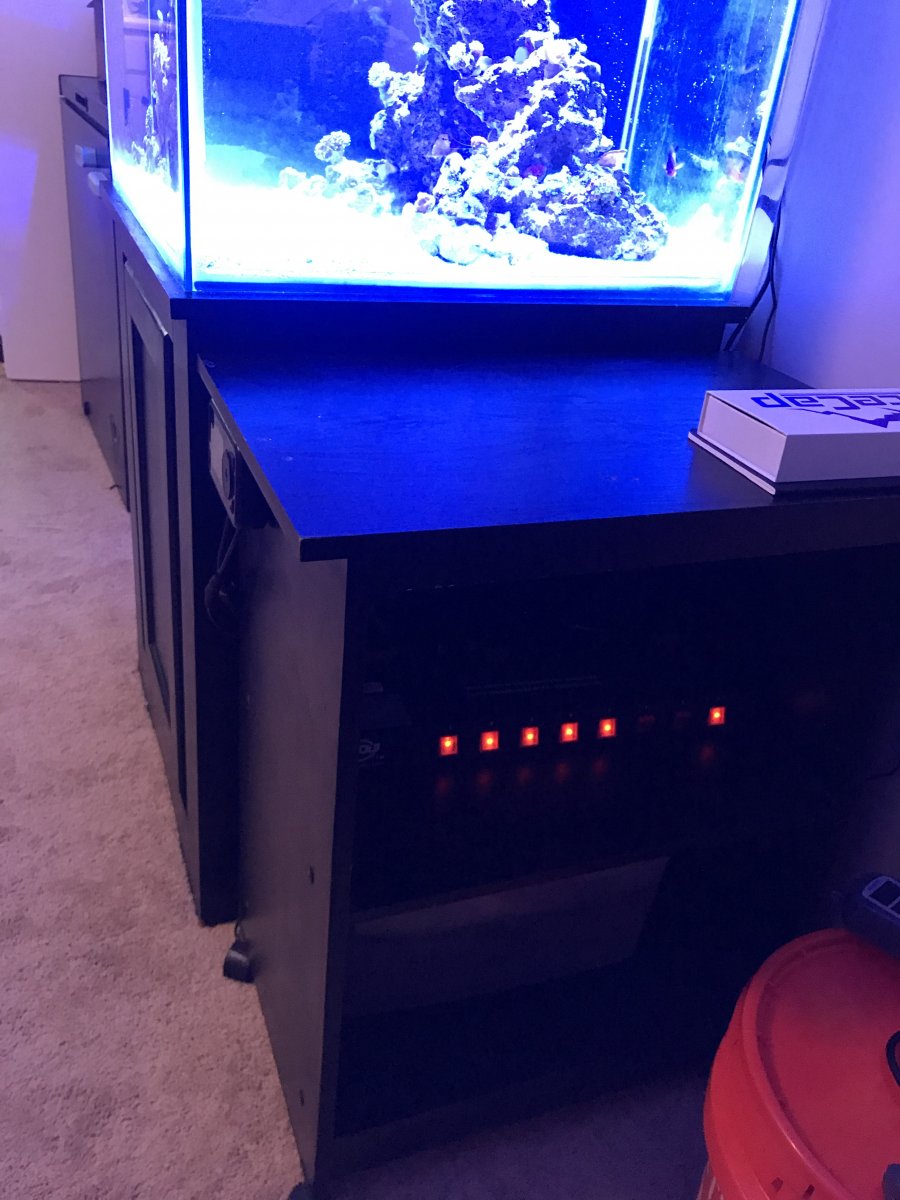 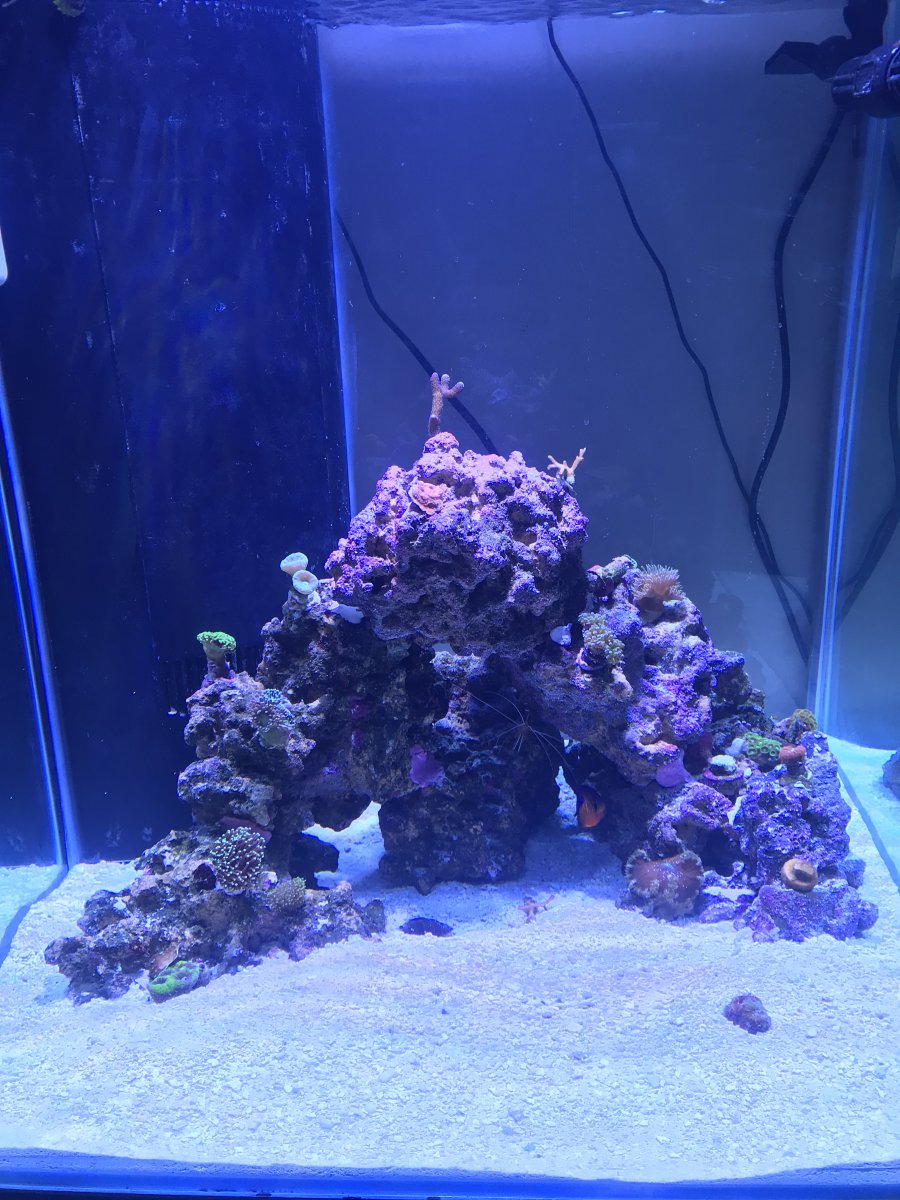 Very nice tank setup. Algaebarn has "clean" chaeto grown in fishless environments so less likely to have "hitchikers" that can cause problems.

Looking good! Curious if you tried the gyre vertical as well?

NY_Caveman said:
Looking good! Curious if you tried the gyre vertical as well?

I have, but I couldn't get it how I wanted it. I will probably mess around with it more in the next day or two.

I got a QT tank set up, and while working on something else noticed some spots on the Coral beauty. I aint playing this game again...so looks like I'll be pulling both fish out and treating, while letting the DT sit fallow for the 76 days or whatever it is. I hate it, but I want to do it right and also not lose all my future fish down the road.
OP

Tank has been doing great. Got the coral beauty in QT now just to be safe, since I want to add more fish later and will QT them as well. Added more coral. Have started using kalkwasser and levels have stayed extremely consistent. On top of that, I have seen major growth in some, if not all, of the coral. Imagine that! HA! Amazing what stable water parameters will do!

Wife wanted a green bubble tip anemone so we added that. I was hesitant but it seems fine so far. Got the flow dialed how I wanted it, too. Things have been great! 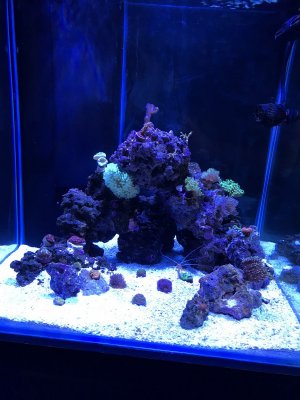 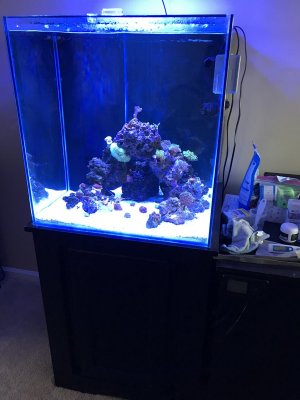 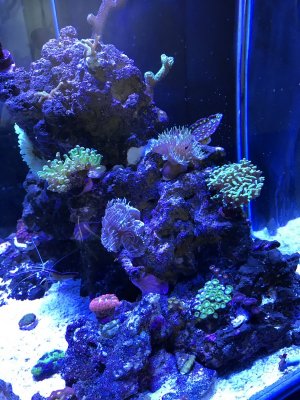 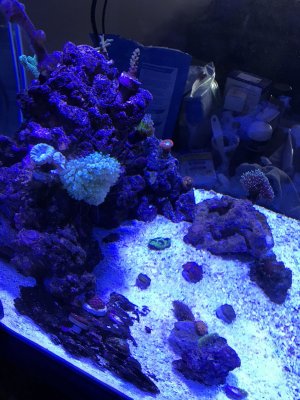 How has that hydra 26 been for you? Currently setting up a 60cube myself and trying to figure out lighting
OP

dmills0324 said:
How has that hydra 26 been for you? Currently setting up a 60cube myself and trying to figure out lighting
Click to expand...

As far as I can tell, it has been great. Everything has growth and great coloration, so I would assume it's working out!

I have the exact same tank. I really like it. As for water flow.... I have an Icecap 1k in the back, halfway down, aimed at the rocks. I have an MP 40 on the left side and a Tunze stream on the right side. Mix and match pumps!

I’m in the process of setting up a new tank and will be combining three tanks into it. One of the fish that will be added is a Pygmy angel. He’s currently in a Biocube with corals and hasn’t touched them.

Good luck with the tank! Yours is very pretty!

If you can stand the poor photography...

I only take these pictures to monitor coral growth. 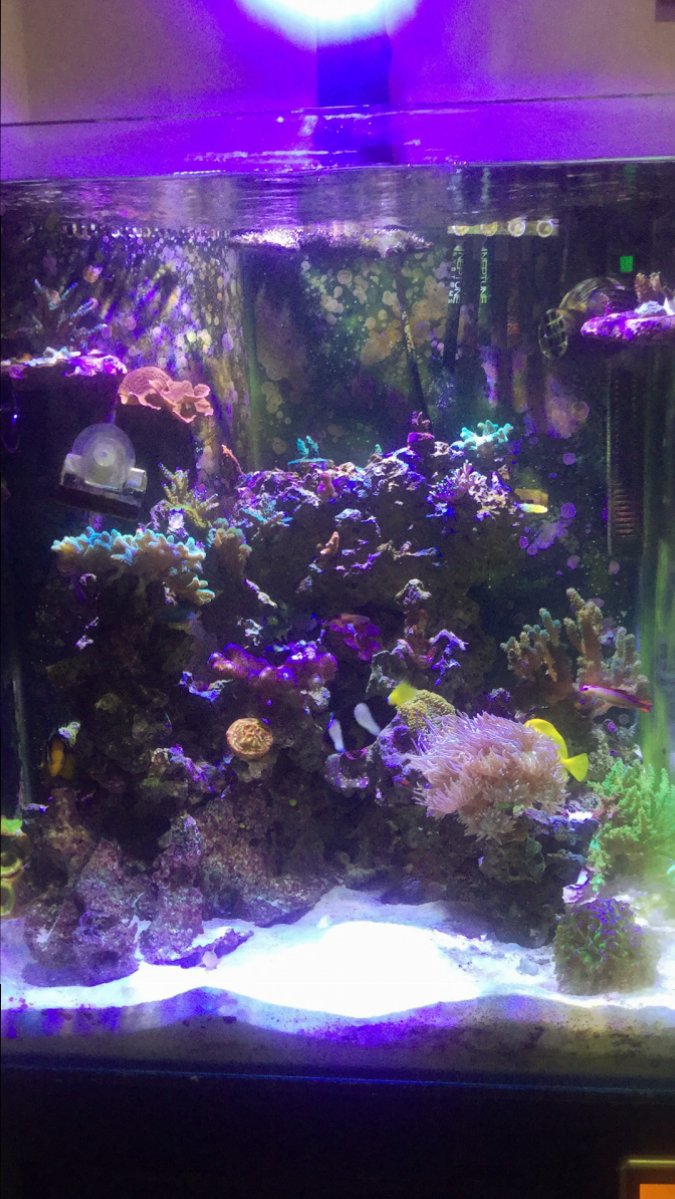 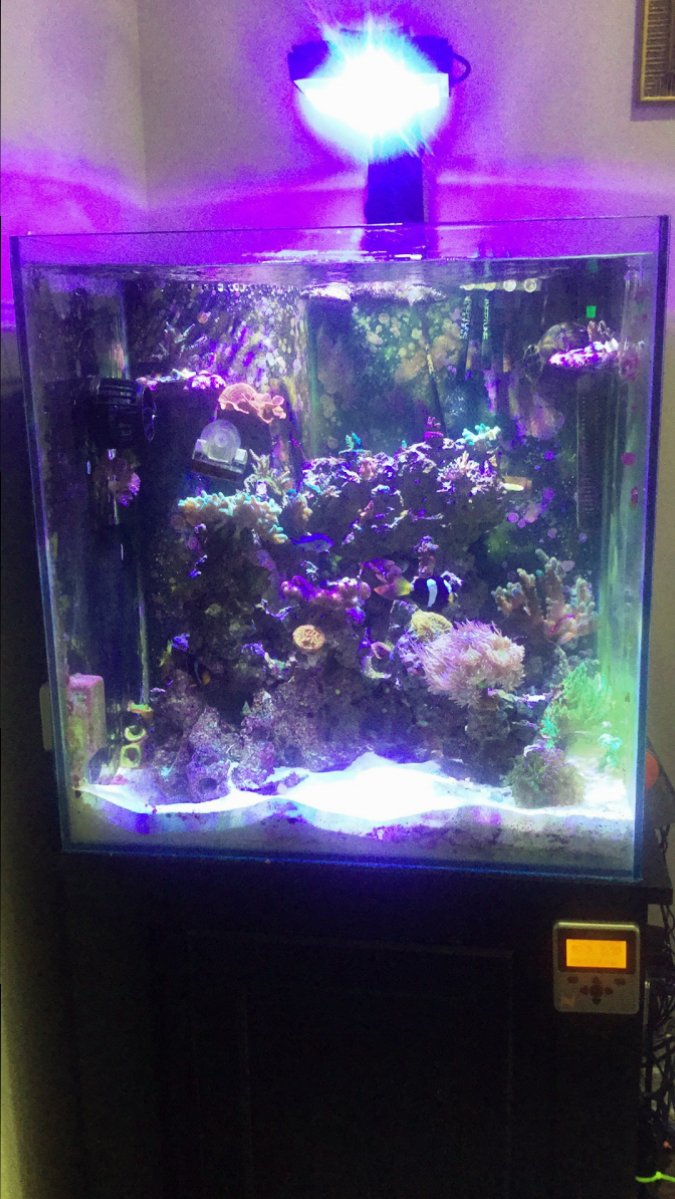 Wow...I really need to do a better job of updating this...

We moved about a month ago. I got a new job back home, bought a house, and planned out the move. Originally, I was going to sell off the tank and everything in it, but after selling some of my favorite corals, my wife said I should keep the rest (lol, of course). While that was great to keep it, I had to figure out the whole moving process. I am a youth pastor and my last event at the old church was a huge conference with my youth group. The problem was, the movers were coming while I was going to be out of town.

After that logistical nightmare and kind of eventually just throwing everything in buckets and getting it to the new house, I got everything in a 20g tank I had as a temporary deal while the flooring was being finished where my cube was going to go. Dad and I finished the flooring and I started setting it all up, but something happened and we needed to move it and fix the flooring, and start over with the tank. It really wasn't that big of a deal, but my wife didn't love the master bathroom being run over with a temporary aquarium and buckets. The master bath was the only place we weren't re-doing floors....Lol....

Because of the small tank and not all my current rock fitting, and also me wanting to re-aquascape/ add more rock, I have a tub of rock curing. The cube is set back up, but it looks sooooo empty. I wanted to wait and do it all at once, but we needed the bathroom back and it was way too small for the fish I have. Surprisingly, the only thing that died in the whole process was my cleaner shrimp, and I think it just had a bad molt or something.

Hopefully the rest of the rock will be ready soon, and I can get a good picture of the "new" set up on here.

A few things I have done different this time:

- I added a 150W MH light with the Hydra 26 and my corals are THRIVING. They all look so good and their coloration is amazing.

- I built a hood because the MH was just too much without it. I feel like I did a good job, I'll try to post some pictures soon.

- I switched out the refugium with a protein skimmer. I've never had one but we will see how it goes. I have a green spotted mandarin and was worried about pods for him, but I still see some on the glass so I think he is ok for now at least. Ill be seeding more and also maybe re-arranging some of the sump to make a smaller spot for some Chaeto.

Once the rock is done, I plan on adding some more livestock. Not a ton, but I think I can put another fish or two in there. I just have to figure out where I'm setting up the QT first.

Also want to figure out different flow options, I just don't think the gyre is going to cut it after I add in the extra rock.

In a way, moving the tank was great because I'm excited all over again for setting it up and seeing it grow. Going to try to do better about posting in this thread.

Re-scaped the cube and added an extra Hydor powerhead I had. Flow seems good, but I never really know with flow. Always confusing to me.

I'm having a bit of a nutrient issue, phosphates are really high. I'm working on getting a GFO reactor but for now am feeding less and monitoring It (have plenty of time being stuck at home). My big project this week is cable management. They are everywhere and I hate it, plusit doesn't seem very safe.

Took some pictures, pretty blue but you can see the new scape. I like it a lot! Also, I'm thinking about adding sand back. What do you think? I thought I'd like BB but honestly I think sand looks better if I can keep it free of cyano and all that. 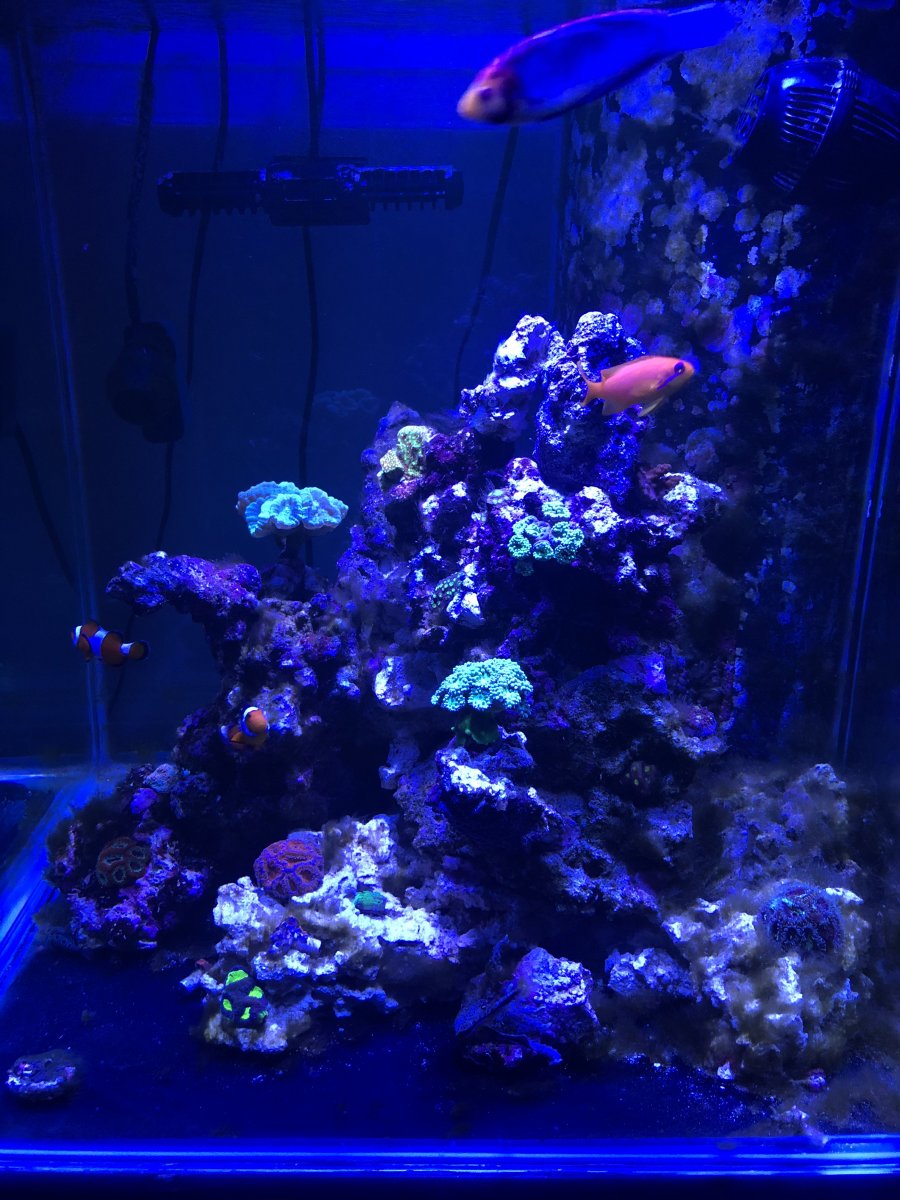 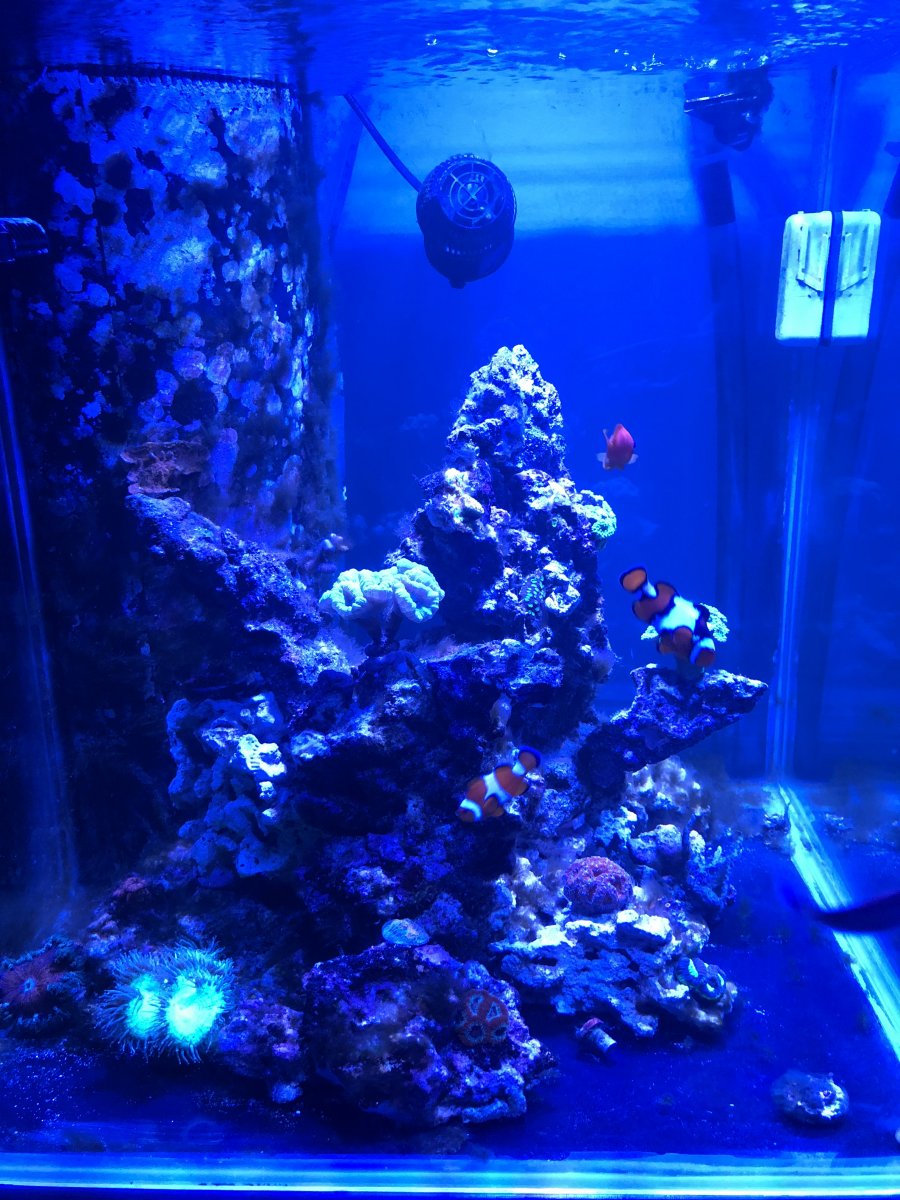 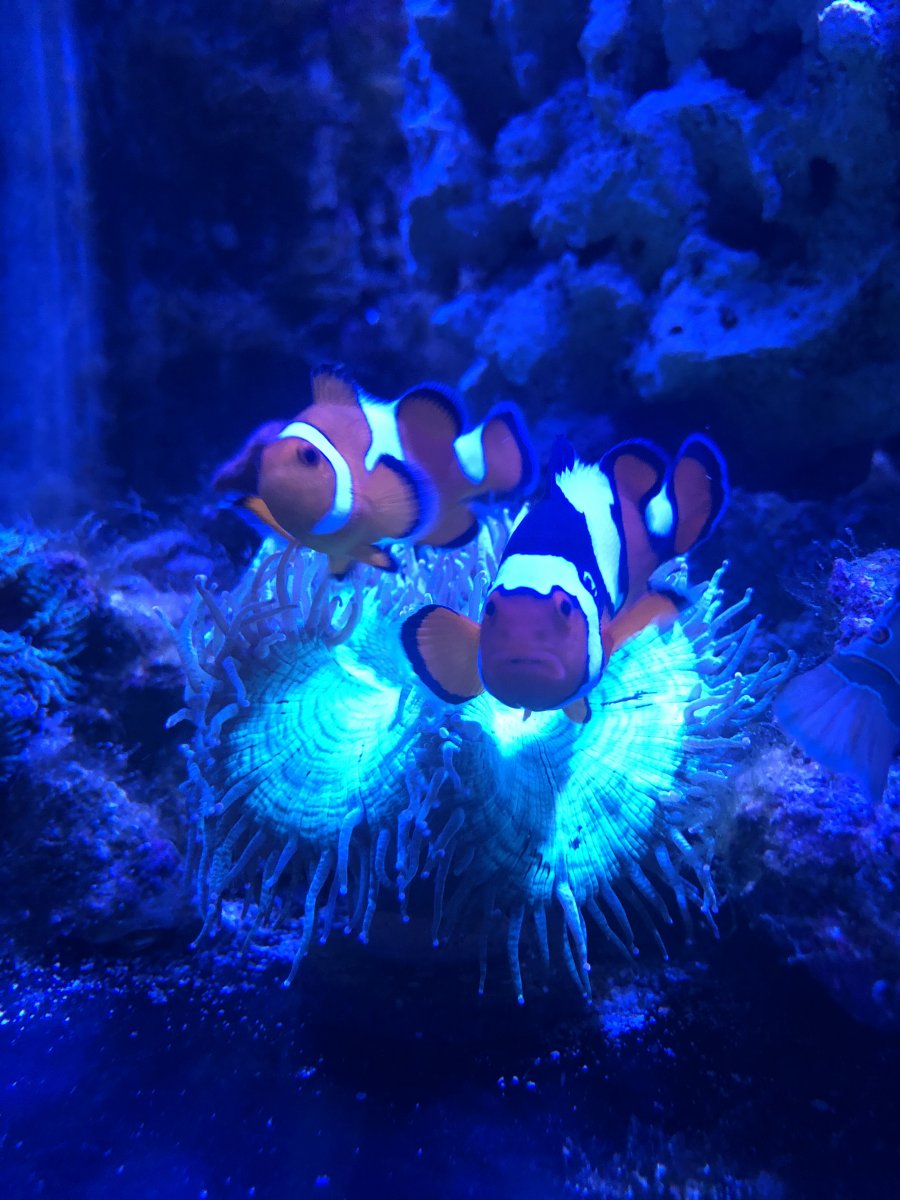 Looking good are your clowns hosting in an elegance?
OP

Yes they are! The smaller one will literally lay down on its side on the elegance. My 1.5 year old daughter loves it and also starts laughing when it is "sleeping"

JonoB said:
Yes they are! The smaller one will literally lay down on its side on the elegance. My 1.5 year old daughter loves it and also starts laughing when it is "sleeping"
Click to expand...

Well. I did it. I added sand back, and I love the look so much more. I'm sure that will last for a few months before I want to take it out haha.

In an ironic turn of events, I can now not get my phosphates UP. Had another run in with Dinos but I have been testing every day and doing what I can to keep them up, seems to help. Still have algae so I know the nutrients are somewhere in there...just trying to take it slow and not over correct anything too fast.

Here are some pictures! 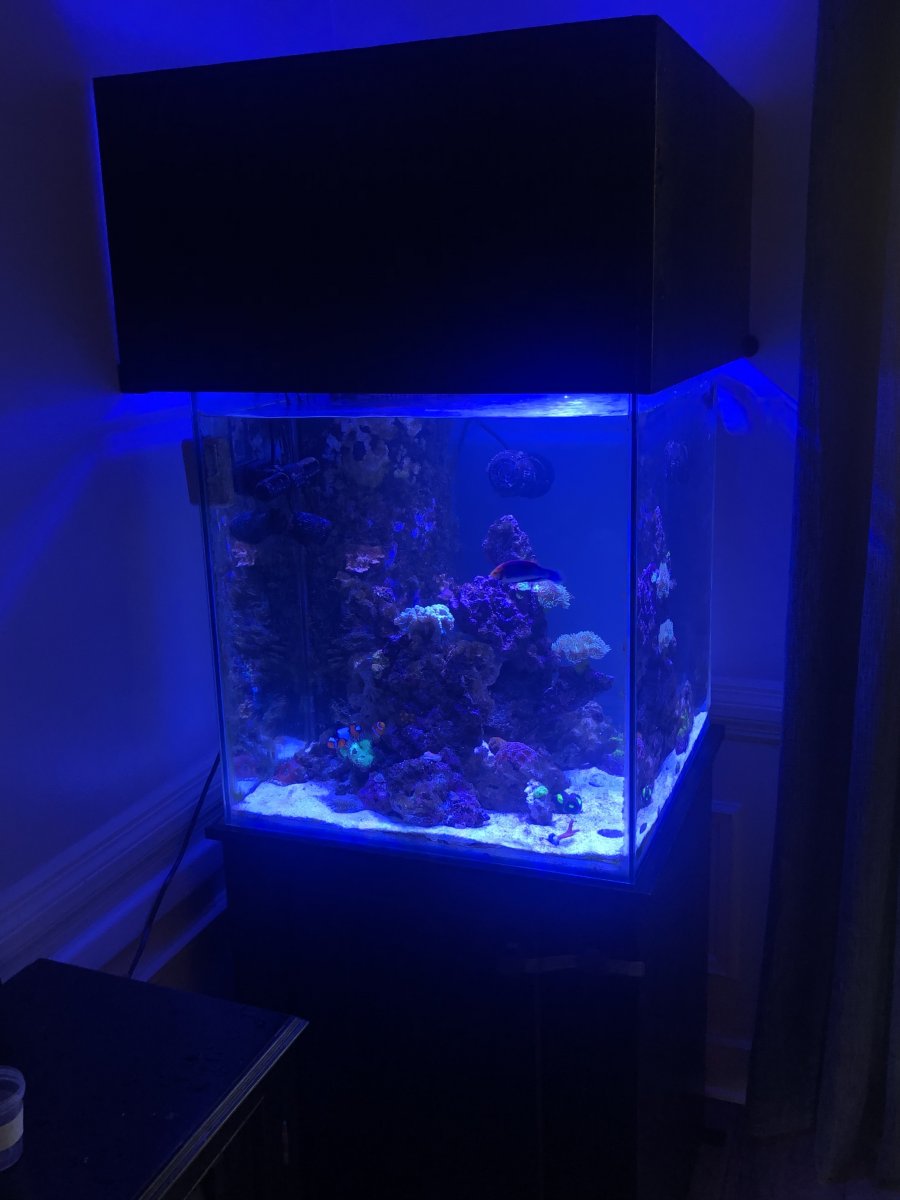 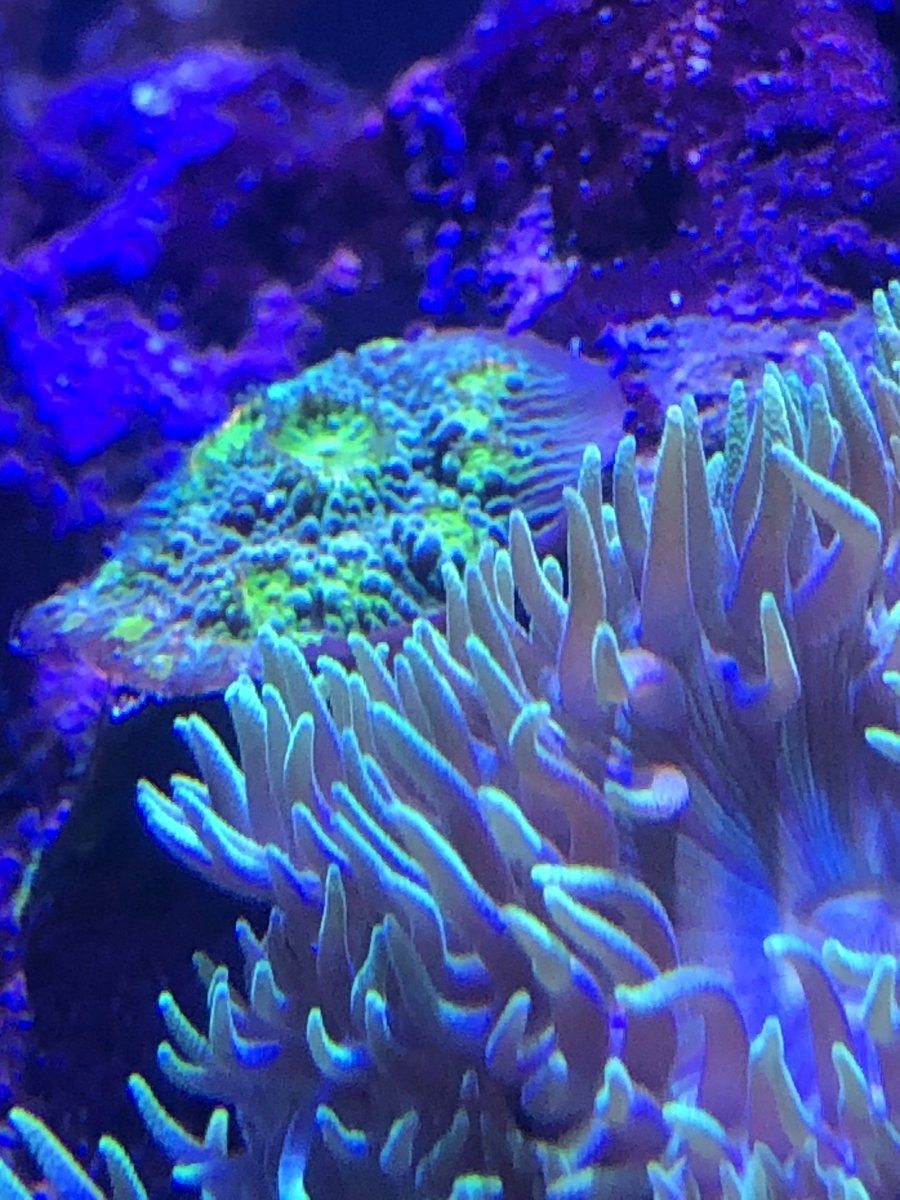 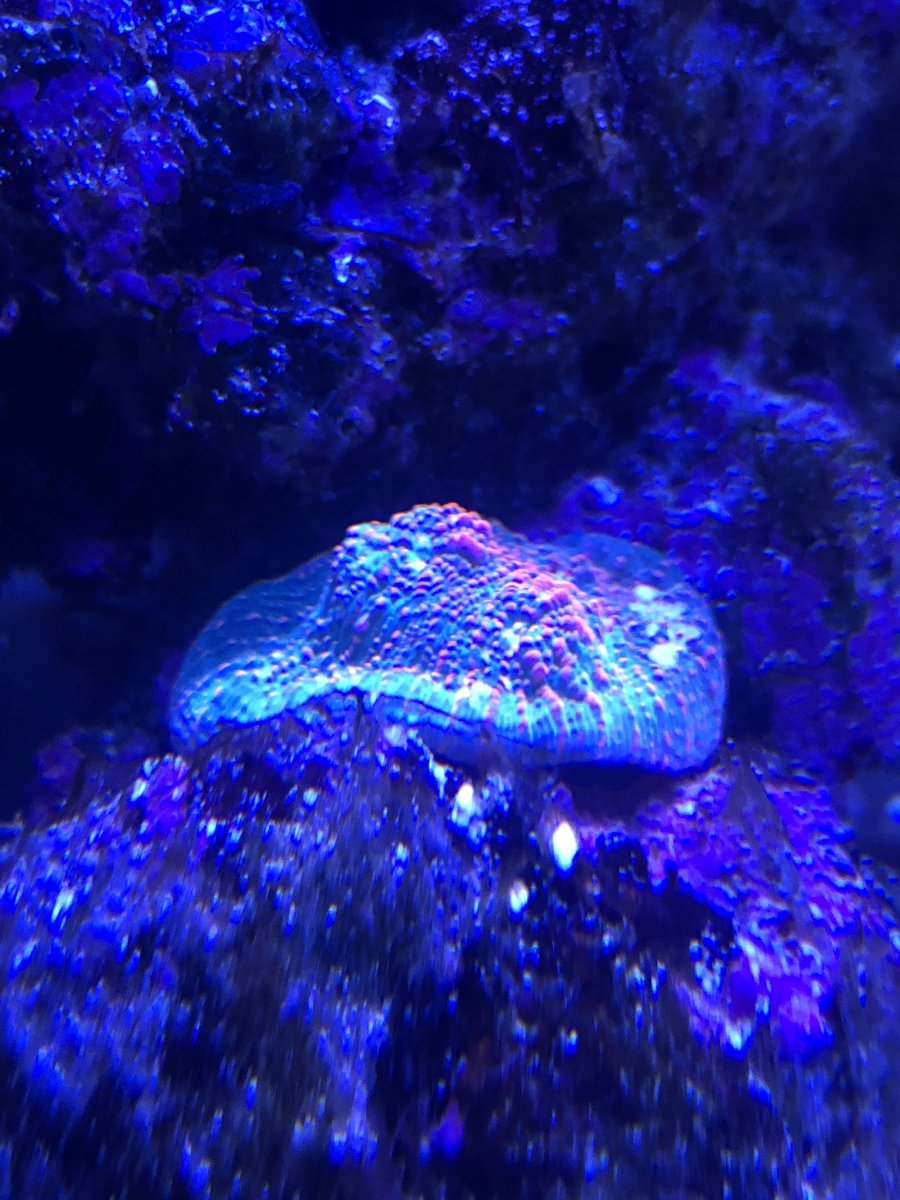 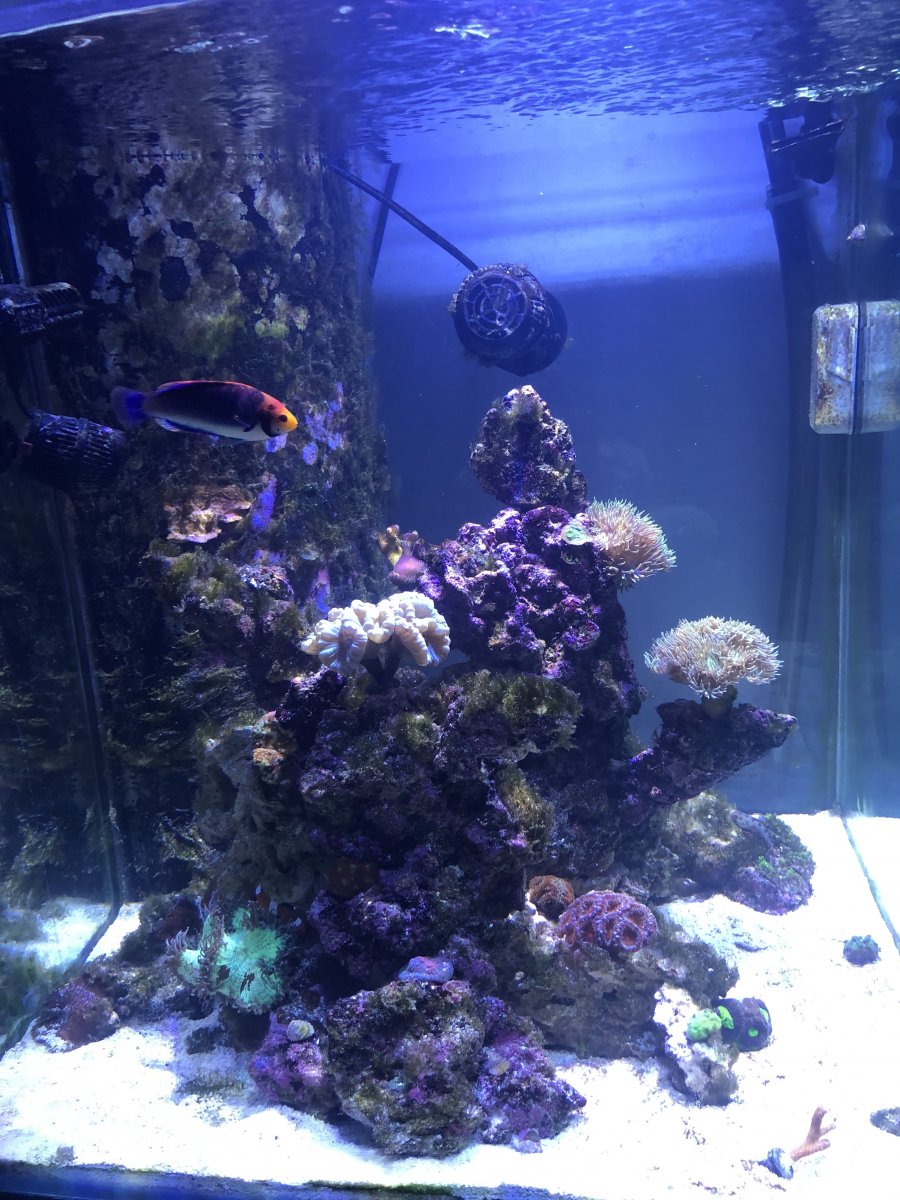 Oh yeah I forgot my mesh top ONE NIGHT. JUST ONCE. and my anthias jumped. Looking at getting some more fish soon. Thinking a firefish, royal gramma, and maybe some sand sifter of some sort.
OP