I'm *finally* upgrading to a single large tank which I'm going to condense 6 other tanks/3 separate systems into (2x 20L, 1x 10g, 1x 40B, 1x 27 gal plastic tub) because so many separate systems sucks to maintain (as evidenced by the hellish algae-ball in one of the 20Ls -_-')

It's not going to be a pretty system - just a tank on a cinder block stand in the back hole of the basement - but it will allow me to do easier maintenance and get engineer gobies, which is the one fish I've always wanted because who doesn't want fake eels that will destroy all your rock work??

First [uninteresting] step in the build is fixing the disgusting walls in the basement which are full of holes and shed weird wall-stuff all over the place. The house was build in 1917 so I had to use lime based mortar on the walls so I didn't destroy them (modern cement products are apparently too hard and can damage the stone old homes were made from), but tbh it was pretty fun to put on and it's wonderful to not have stains all over the walls (still have another coat of paint to do).

My stocking plans include: 1 pair clowns, 2 engineer gobies, 1 lubbock's wrasse, 1 green canary blenny, 1 carpenters or mckoskers wrasse, 2-3 springeri damsels & some cleaner shrimp. Assorted corals, mostly softies & duncans because I have simple taste ) There will also be another clown pair and some green bands stashed in the fuge.

Aquascape will be an NSA made with superglue and the macro-400 mortar (and sitting on the bottom of the tank so the gobies don't destroy everything when they get bigger).

Pics: Origi-wall without any work done, Wall after hole patching & preliminary primer layer, one of the 20L when I don't pick the giant algae balls out of it. 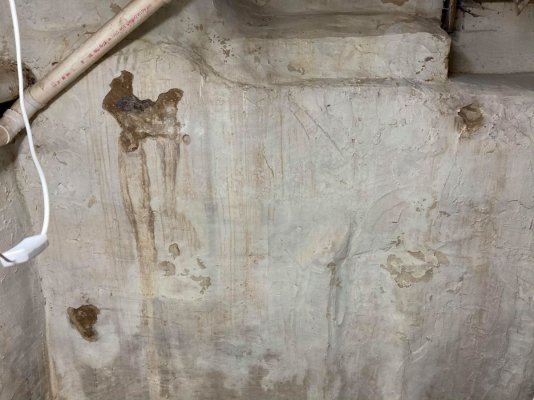 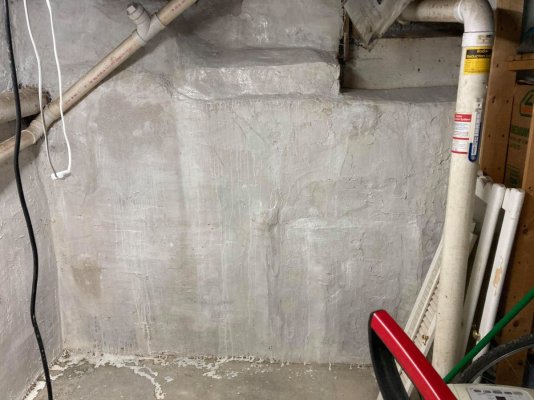 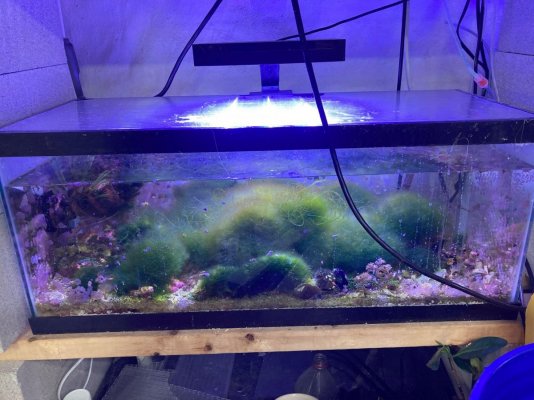 Congrats on the upgrade,

Sounds like it will make life easier putting everything into one tank. Plus extra volume should help keep numbers more stable. Keep us updated
OP

Thanks! I'm super stoked about it. At some point I'll probably end up with an apex for monitoring and such - it never made sense with so many tanks before but with a single tank with all the things in it it seems like not a terrible idea.

I also came down this morning to see one of my brittle stars eating the cleaner shrimp I got a few days ago. Once the lights came on I realized it was a molt, but I nearly had a heart attack -_-

Tank is drilled, stand is done, playing woth some NSA aquascape stuff and of course making myself some custom silicone gaskets for my bulkheads because the ones they come with never work for me -_-‘

aaand my tank might have cracked while i was putting the bulkhead on. *** if i need to get a new one -_-
(open to thoughts on if this should be trashed or not btw - there's a large crack ending around the edge of the bulkhead and a larger than normal chip on the other side).

I'm so mad right now though [mini rant incoming] because i ordered a tank during the dollar/gallon sale and went to pick it up on the last day of the sale only to have the person tell me the tank broke and the order was canceled. Of course i never got a notification for that because the order status wasn't marked 'canceled' just 'no info available' so i got no email update. By that time there was nowhere else in the area to get a tank and the sale was over. So I found a local place that had 75s in stock (for less than petco's normal price but still double the sale price) and picked one up. I REALLY don't want to end up spending 400 on a tank and also figure out what the heck to do with the old tank.
Like, in the long run i feel like it makes sense to get a new one because of how much other money etc goes into a tank and i don't want it exploding and killing everything/flooding the basement... but if i get another tank and it cracks, i'd need ANOTHER tank... or i could get another tank and a HOB overflow (lifereef) and that's still almost the price of 2 extra tanks and I don't like HOBs.

I'm just super frustrated atm.
And if I DO need to get another tank my boyfriend is going to get super overwhelmed by all of that and it's going to make everything more complicated than it needs to be :/

On the bright side, my bulkhead gasket things I made work amazingly. I've been making them for all my tanks more or less since I started drilling XD

Someone suggested I over-drill the hole since the crack was small/localized and I tried it and IT WORKED!!!!!!!
Now I have a piece of crescent-shaped morbid wall art and the cleanest hole I've ever put in a tank before.

Only down side is it's pretty close to the top of the tank so fitting the bulkhead in might be a bit of a challenge... later problems on that I think but worst comes to worse I can always cast a new nut for it... This project is getting way weirder than it was supposed to...

My god. I just measured and the hole is 68mm across and 10mm away from the plastic rim at the top of the tank @[email protected] not ideal at all, but at least BRS makes some bulkheads that will fit that space if I offset them slightly.
And it kind of works out because I needed/wanted to order some other weird fittings from them anyway.

I went on chat with them and confirmed my measurements made sense and the chat person (Ash) was absolutely lovely & supremely helpful. +100 points for BRS customer service.

And a link to the most ungodly useful measurements I have ever seen on a bulkhead site: https://www.bulkreefsupply.com/content/post/selecting-the-correct-bulkhead
Like that's the info I want before purchasing a product - never before have I seen min/max hole size measurements listed and that's so unbelievably helpful!

Time to eat celebratory cereal and order some more nonsense

The tank is in place! I HIGHLY recommend moving straps for moving things around (the ones with the back harness). Wouldn’t have been able to do this without them. (The tank weighs 30lbs more than me and I have noodle arms)

I got straps with 2 straps for extra stability and threaded them through the handle holes on the og tank cardboard to hold stuff in place (saved it specifically for this) and then we legit slid it down the stairs (terrifying) but it was easy to get down because my bf was able to pick up the end and the harness supported the whole tank so I could just keep it from wobbling instead of scuttling down awkwardly trying to hold the thing up.

I was also able to lift it by the straps to get it on the stand (and standing on one leg with my leg taking the weight of the tank and my bf pushing it onto the stand from the other end. But somehow we managed to get it in. Water testing again for fun but I can do more aquascape now since I have somewhere to store the live rock where it can be wet. Whee. What a weird week...

I also have the 40b to put on the lower shelf but that’s full of stuff I need to empty/clean so for now yay storage?

Aquascape is done (jk. This is like 1/4 of the rocks I have to do...)
The pic of the dry rocks is 3 separate structures I just wasn’t able to move while mortaring. Broke two putting them back in the tank, but nothing some more mortar won’t fix. This would be way easier if they weren’t live XD
Meanwhile the engineer gobies have started tunneling in the other tank.

Because I’m tony and weak all my aquascape pieces are like small 20lb standalone sculptures (currently not organized in the tank, just there to be wet. They’re really fun to make though! I just need more glue -_-‘
I’m also really liking the e-Marco 400 mortar. It’s easy to work with and does seem super strong once cured.
if I ever setup a new tank I’m doing the scape with dry rocks though... having to spray my rock pipe every 20 mins is both messy and annoying XD

and I found some of my red dusters were still alive and kicking from the rocks I did the other day so yay to that! I love the red dudes. Oh, and there’s already a ginormous aiptasia so yay to that... (I plan on starting an aiptasia tank so I can keep bergia - once I scrape my glass on another tank I’ll probably have about 200...)

fare well Until I have more glue...

Unrelated to the build thread but it freaks me out how my green canary blenny just... sticks to things? Like he looks dead all the time just plastered at weird angles to the wall of my tank...
I have a feeling once this dude and the Lubbots go in the 75 I’m never going to see them again because they’ll just be sticking somewhere random or hiding XD 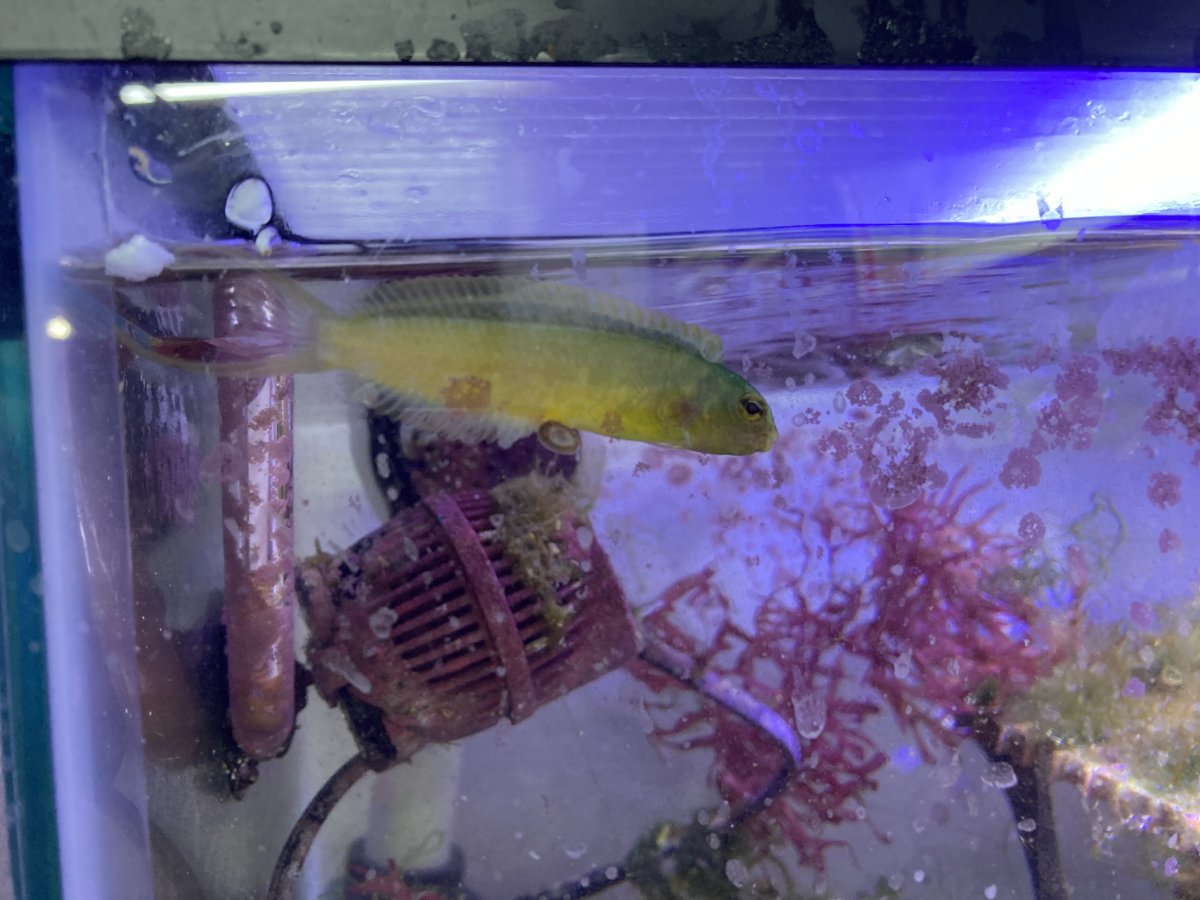 It’s starting to look like a real tank.
cables, not so much...

Almost done breaking down my old systems finally...
I might need to offload some of my macro algae and 10” square carpet of gap at some point... I’ve been hoarding algae a bit... that pic is a 40b and I have another tuft half that size in the tank above

the engineer gobies seem into the rock work too which is neat. I made basically all of it raised so there’s built in nooks under the sand and I keep seeing them poking out of different places which is funny.