I'm starting another pico! It is a 2.5 gallon anchor hocking jar. Right now it doesn't have a light, it is just getting ambient from my 1.5 gal and the window it's sitting under. In went a small amount of sand I had around. I bought ~6 lbs of rock at a LFS as well. I broke up one rock into smaller pieces but ended up not using it. I think I'm satisfied with this scape. I wanted something simple and to be able to remove the rocks from the jar if needed. I also didn't want the rock to touch the glass at all. Not sure it was really worth my 50 bucks though, since this rock is not very "alive," frankly. Pretty sure some of it is ceramic painted purple with questionable amounts of coralline. I guess I get bacteria anyway.

Alas, the LFS had lots of blue clove in two of their tanks (why I went there), but there wasn't any except on giant rocks so I wasn't able to get any yesterday. I started this with a couple cups of water from my established tank so hopefully won't have much of a cycle with that + rock. The lid is very tight with the two cords. I might see how this jar does without a heater to have one less cord. Not sure what I'll do about the tight lid.

I still haven't decided what else I'm putting in this tank. I'm feeling like maybe a stylophora or seriatopora (or an encrusting sps?), and/or Palythoa grandis. I was also considering a chalice. I'm planning for something somewhat aggressive/fast growing. I really like P. grandis (and maybe some typical large invasive button palys) for this jar since it's quite large, if slow growing. There are a couple varieties of larger paly's in the LFS tanks with all the Sarcothelia over the rock and glass that seemed to be fine, even a large colony. 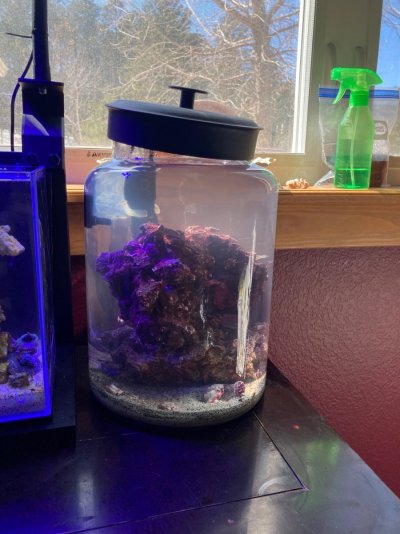 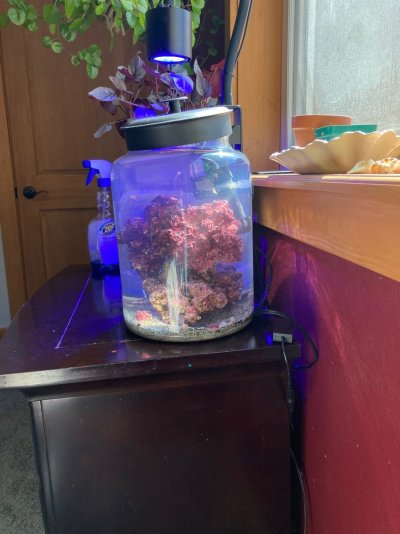 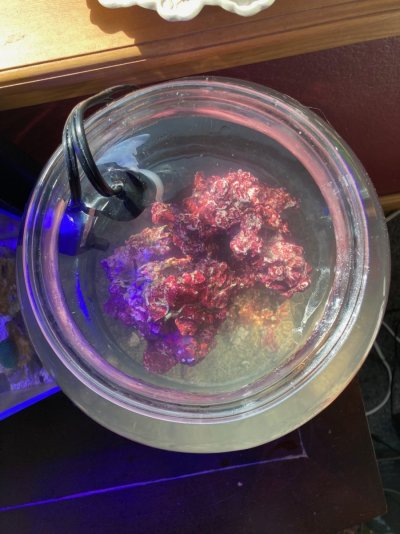 It looks huge next to my cube! The plan for this jar is to just let blue clove polyps go wild and cover everything. I really like Sarcothelia but didn't want it in my cube. I didn't appreciate how much water would magnify things in the jar. But because they're so tiny, maybe that will let me appreciate them more. I do want at least one other coral in here for some visual interest and color. I do not have plans for livestock as of yet. Thanks for looking!

Awesome Pico! Following for sure!
OP
A

Still don’t have any blue cloves. But I did pick up a few frags from Jared who owns MyReefToYours, including this real nice clump of cinnamon P. grandis. There are five polyps on that frag plug plus what looks like three more budding!
The largest is definitely at least an inch across. 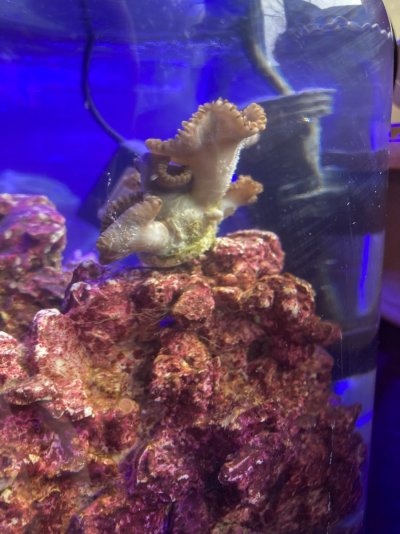 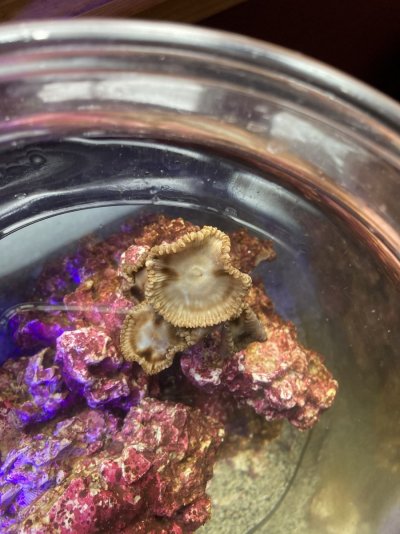 Closed for eating! I decided to try mysis since I have them and I figured I want to feed the grandis palys to encourage color and growth over time. I want to get at least one other color morph of these guys. I imagine they will take other small meaty foods but their mouths aren’t that large so I figure they probably can’t eat anything much bigger. They aren’t glued down or anything yet, just sitting on a flat spot. 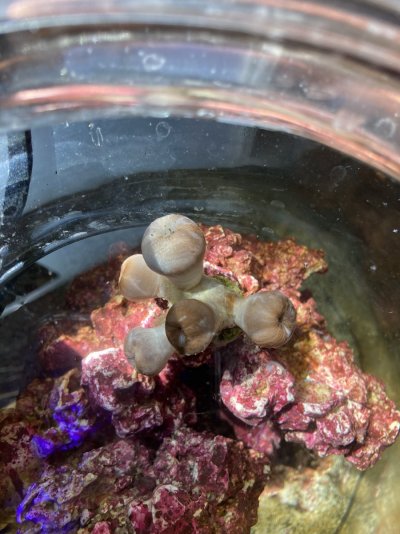 Catalina goby in a jar?