Brs bought marine depot is what they meant

Wow, Marine Depot is about 7 miles from me. They don't allow local pickup, but items do arrive pretty fast for me.
A

I also live in CA and would order from MD when I needed something fairly quickly since their shipping time to my door was much shorter than BRS. Oh well.

Wow I just saw this I order everything from Marine Depot and it comes pretty fast. Hope nothing really changes 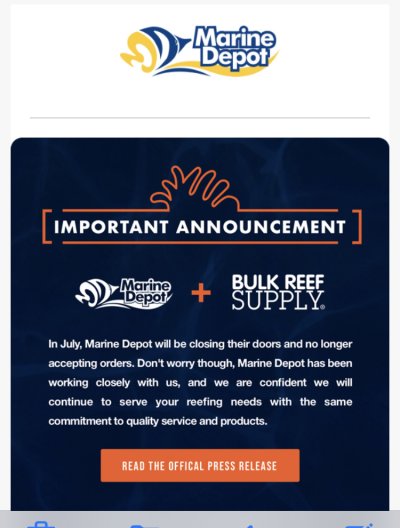 This is very much true in my case. When I built my 180g last year, I only ordered a few things from BRS. The bulk of what I ordered came from Amazon.

1. Amazon ships faster and has free shipping(I already have prime). BRS charges me shipping on everything, and it takes them a few days longer on everything. Pay more to wait longer.

2. Amazon has a better selection. While there are a few items that BRS has that Amazon doesn't, for the most part I can get the exact same items from Amazon. At worse it's the same price, but often times it's cheaper due to some individual seller or whatever marking it down. While BRS is always full price. When I bought my Kessils, I saved over $150 by ordering off Amazon vs BRS. Meanwhile, I couldn't even buy my Jabeo return pump off BRS, because apparently even though it's by far the best bang for the buck, BRS is too good for them.

Things I actually order and buy from BRS:

All my dry rock, marco, the cheap stuff.
Super glue - I love their big bottle of superglue.
Marco Cement - probably could have gotten it elsewhere, but I was already ordering everything else.
7 stage RODI system - I bought a cheaper one off Amazon 2 years ago, the BRS one is much better.
All my dosing additives. Can't beat BRS for these from what I've seen. I dose the 2 part and also the tropic marin 3 part system.

And that is it. I found better deals and/or products they don't carry elsewhere - mostly on Amazon.

I have found that with reef equipment that I have purchased Amazon was always more expensive.

wow nice, maybe I can buy some brs good in the future from amazon.ca
1

I rather saltwateraquarium smaller company and seem more nice And understandable plus I've always like the smaller guys.shipping is great also.

I buy from a myriad of online retailers...............seldom Marine Depot or BRS and even less from Amazon. All three generally have higher prices and sales during holidays usually stink.

It's easy to compare prices and save plenty of $ for 20 minutes of online surfing.

First thing to consider is if they charge sales tax. For me that's a 7% up charge from BRS, Amazon and now Marine Depot.

Each online retailer also vary in reward points for discounts as well.

Who will BRS acquire next??
2

J
Looking for a nice moonlight