Long time R2R lurker here. Been keeping aquariums my whole life and reef tanks since about 2005. Six years ago I shut down a 120 and I've been missing it ever since. The bug has got me and now I'm planning a new 210 gallon tank.

Still looking for recommendations on a good sized QUIET return pump. My plan is to try to get about 1000gph returned to the tank with enough overhead to add reactors in the future through a manifold.

Stocking
I've always chosen mostly decorative fish and a large clean up crew. I think this time around I'll choose fish that can maintain the tank for me. Will be using a lot of herbivores and wrasses for pest eradication. I'm definitely looking for advice on the order in which to add these fish based on aggression levels. I'll list them in the order I envision adding:

Still just in the planning phases right now until my bonus arrives at the end of the month...
Last edited: Jun 4, 2019

That sounds like a great build thread and just remember we need loads of pictures!
OP

SPR1968 said:
That sounds like a great build thread and just remember we need loads of pictures!
Click to expand...

Will do! As soon as equipment starts showing up I'll take pictures!

Here's a picture of my old tank before I shut it down: 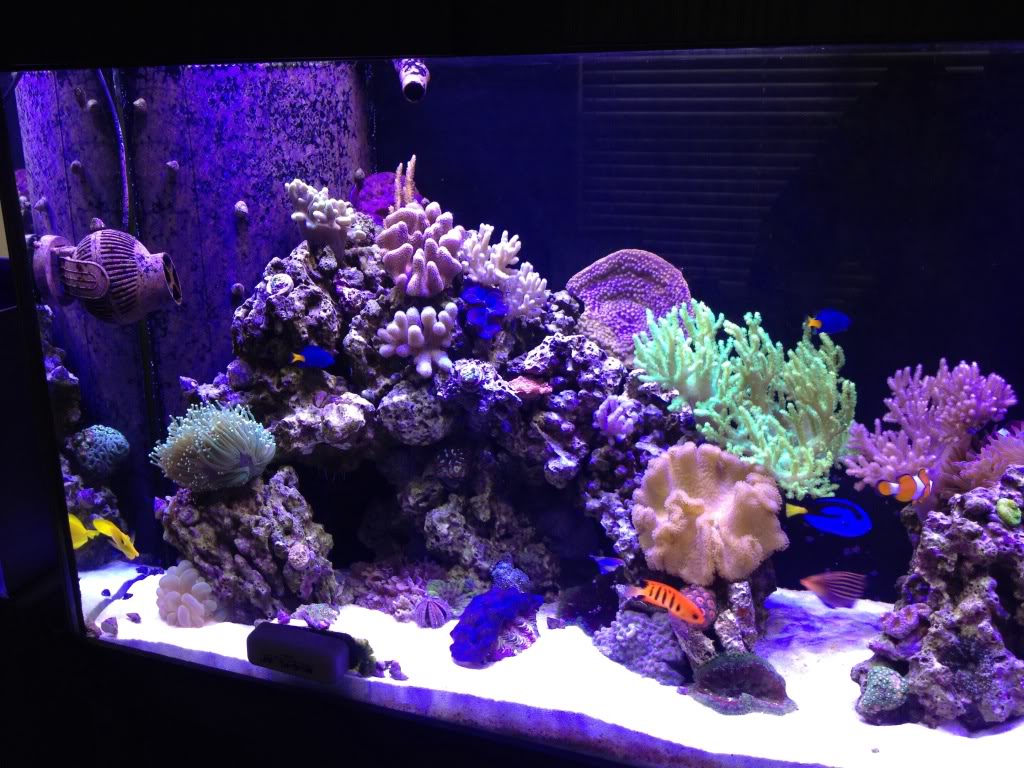 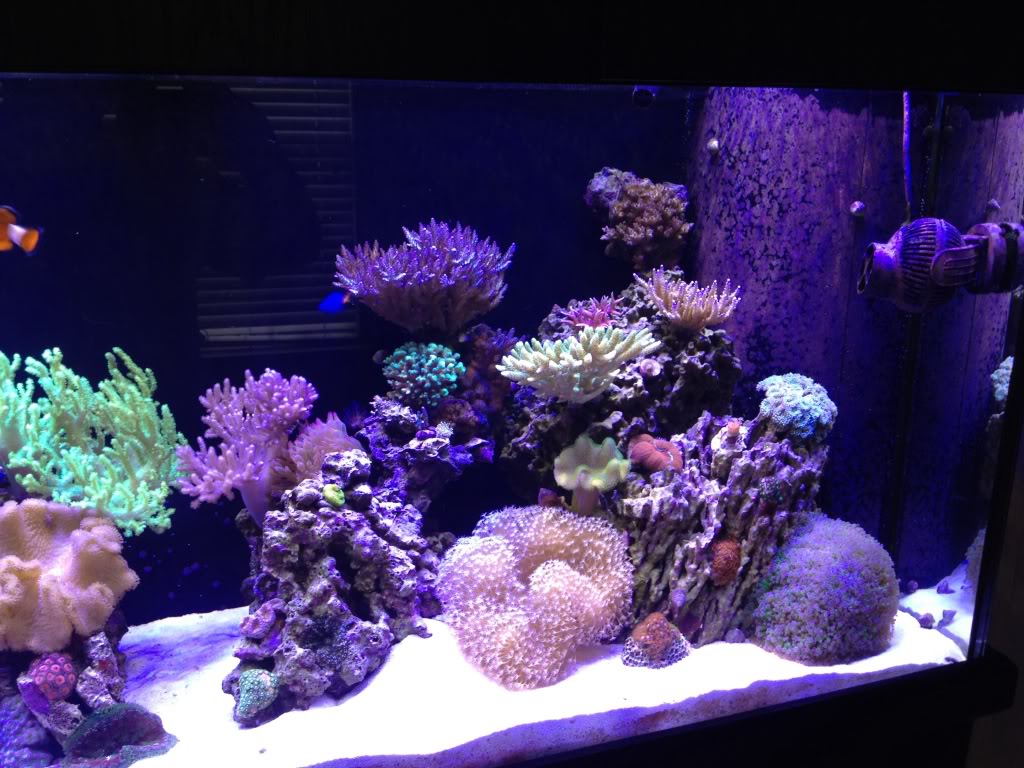 Not sure why my pictures aren't showing up... Can you see them?
OP

Packages are stacking up... pictures to come soon. 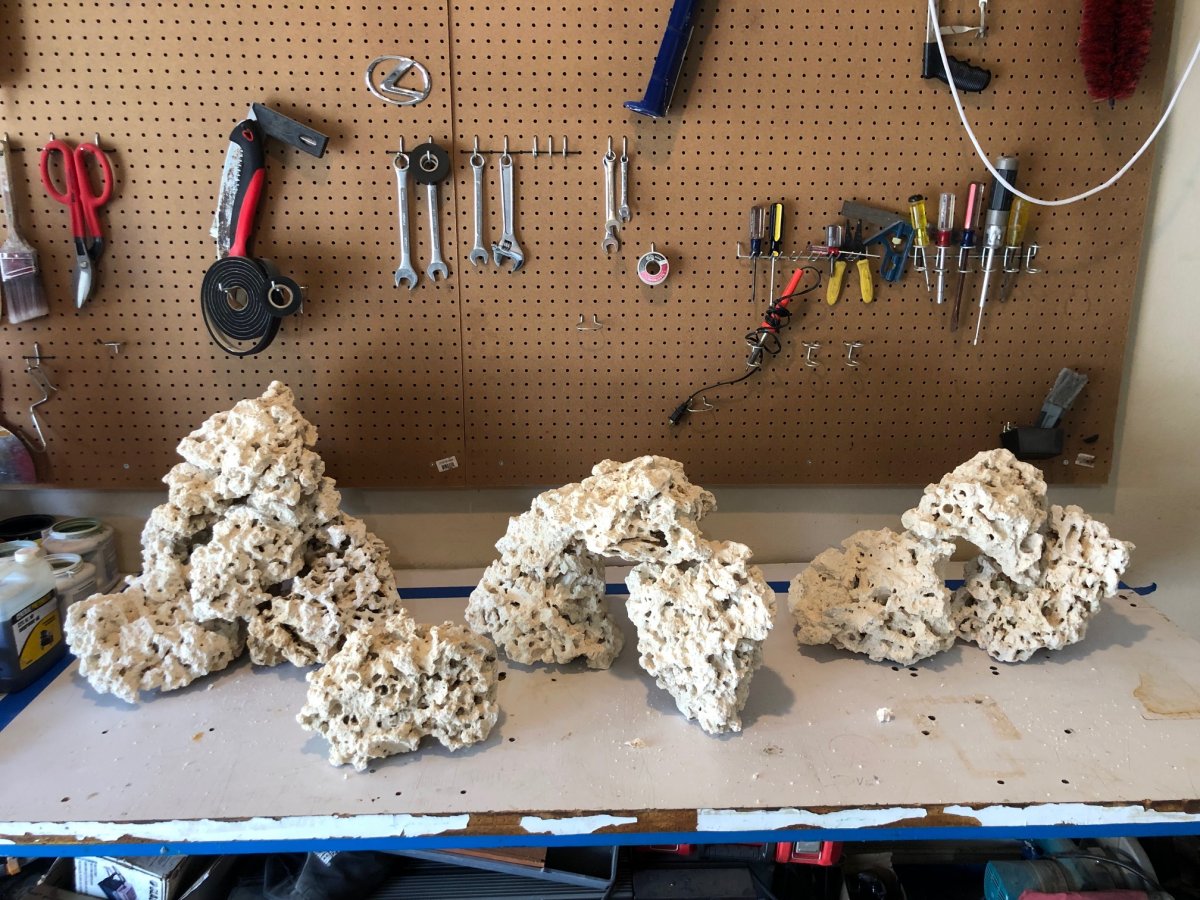 I picked up 120lbs of Marco rocks today. As I unloaded the car I just threw them on my workbench and came up with this. I think I need more rock and will play with these some more.
OP 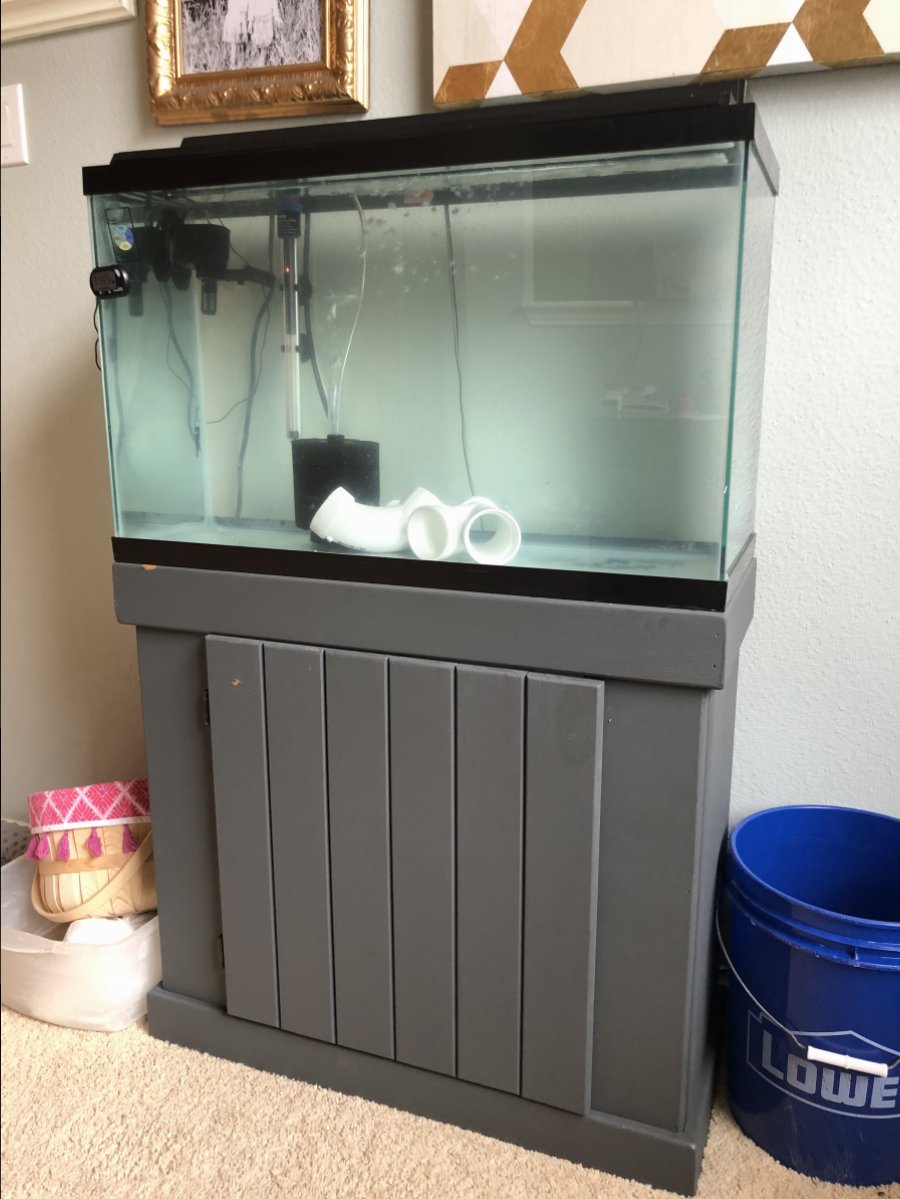 Quarantine is up and running!
OP 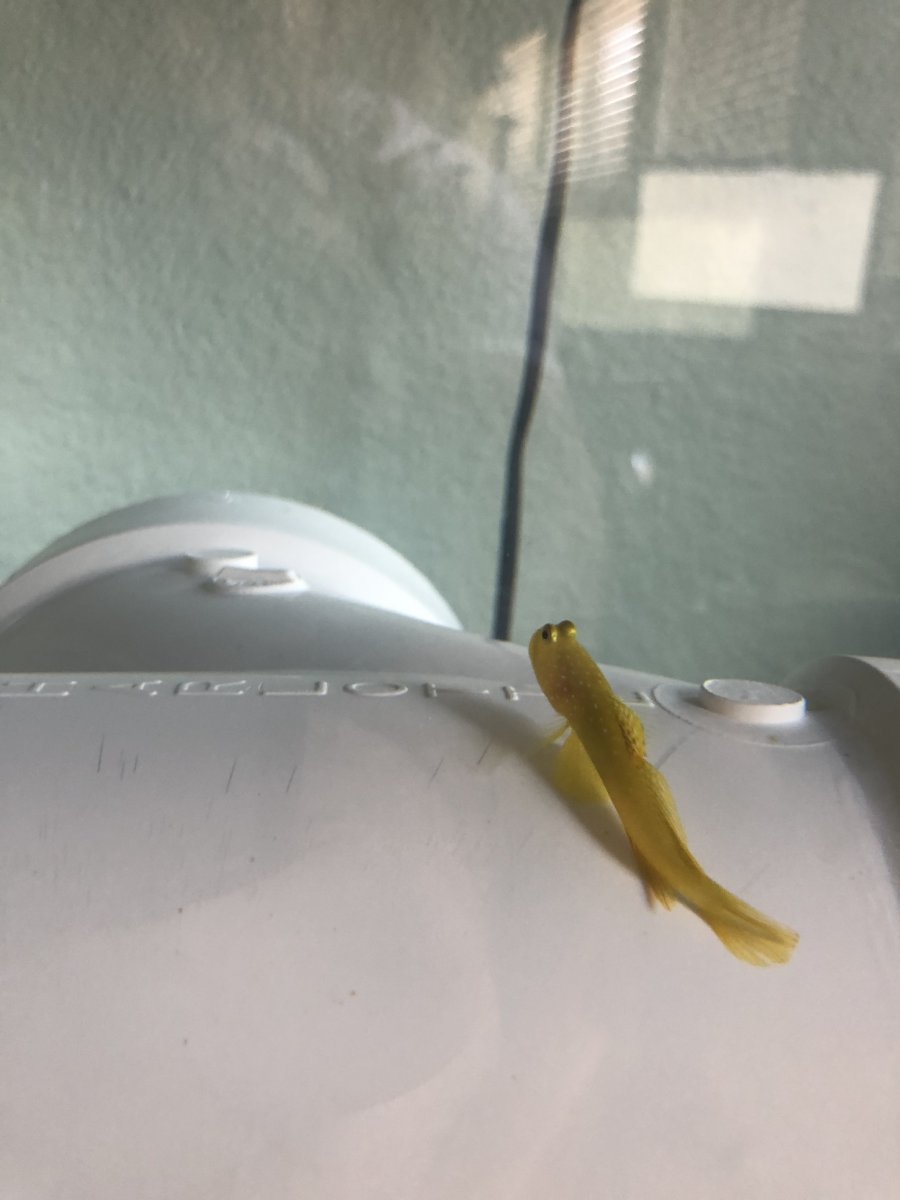 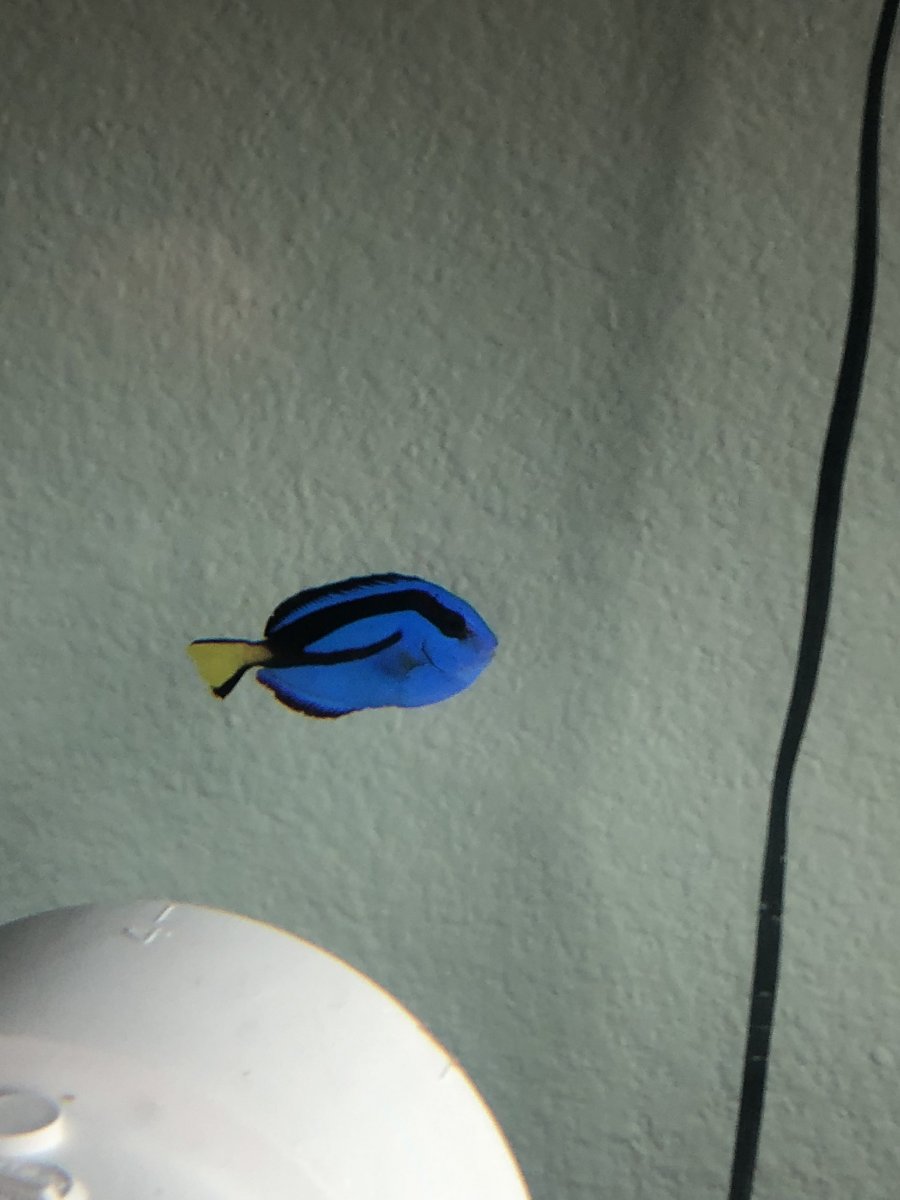 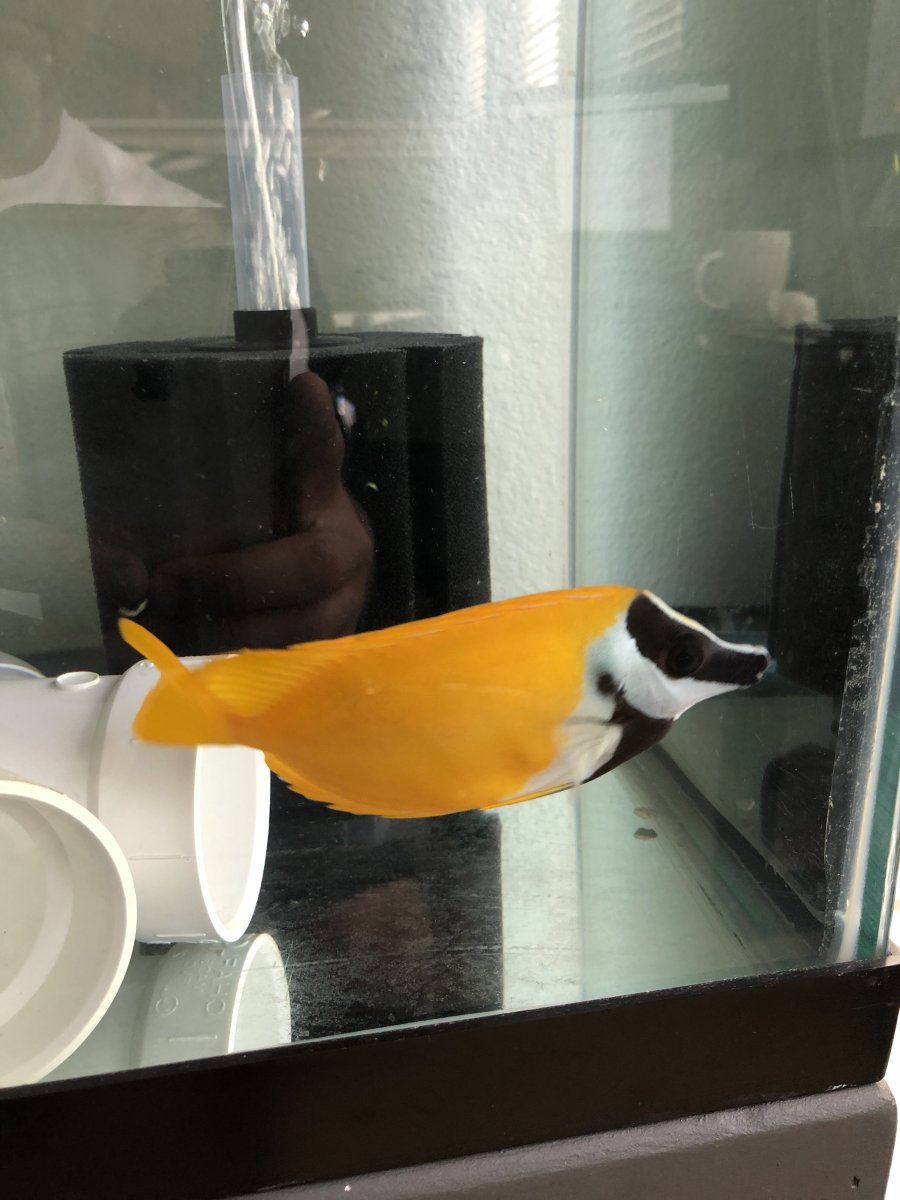 Plan is to wait a few days for them to settle in and eat before throwing meds at them.

Display tank is getting delivered on Thursday!! More pics to follow!
Last edited: May 18, 2019
OP 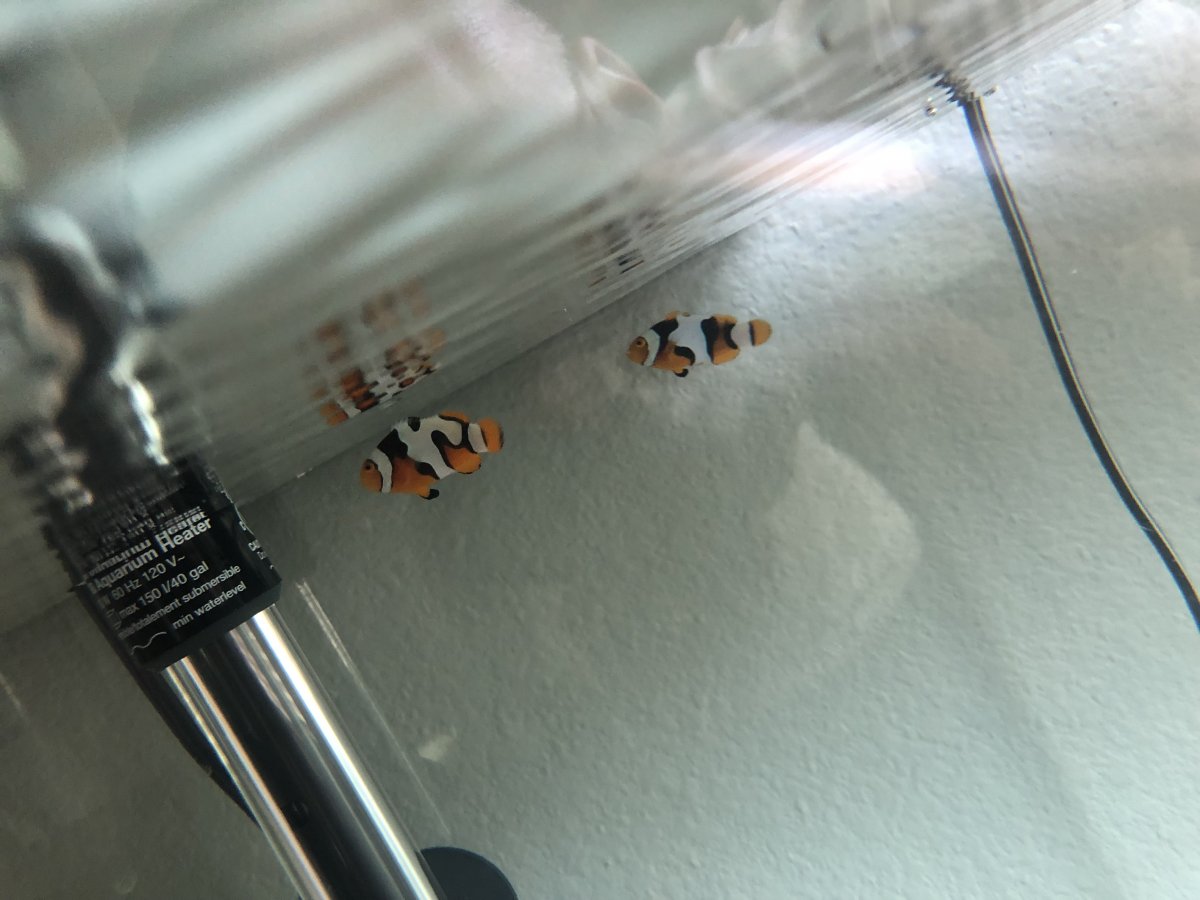 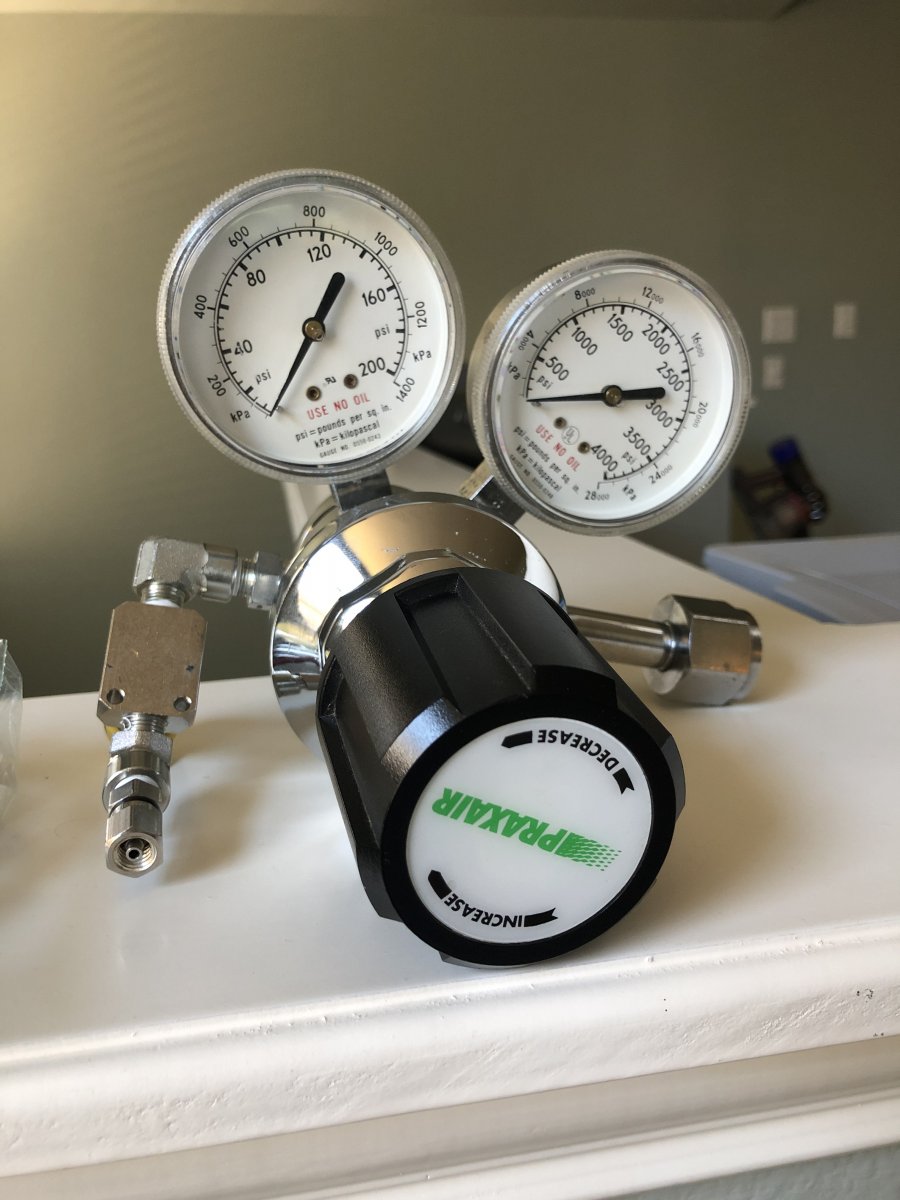 Alan Le custom CO2 regulator showed up today. Can't say enough great things about this guy! He tested The first one he built me and it didn't hold pressure so he built me a new one. Super stoked to have this in my system!!!
Last edited: May 18, 2019

Added first dose of Copper Power to the QT this morning. 5mL brought me to .25ppm using HANA Checker.
OP

I guess I'm due for some updates. Tank arrived. Plumbing completed. Did a leak test. ZERO LEAKS!! WOOT! First time this has ever happened. The bad news... I got the tank in place. Started filling with RODI water. I have a garbage can in my garage on a stand I built. I put a pump in the can and ran a long tube to the tank to pump in RODI. Last night I drained the can and unplugged the pump. What I didn't realize is the RODI stand is higher than the sump where I had the water being pumped into... Yep... a siphon cause me to flood my living room. Wife was not pleased. I guess the good news is it was just freshwater?
Last edited: Jun 4, 2019
OP 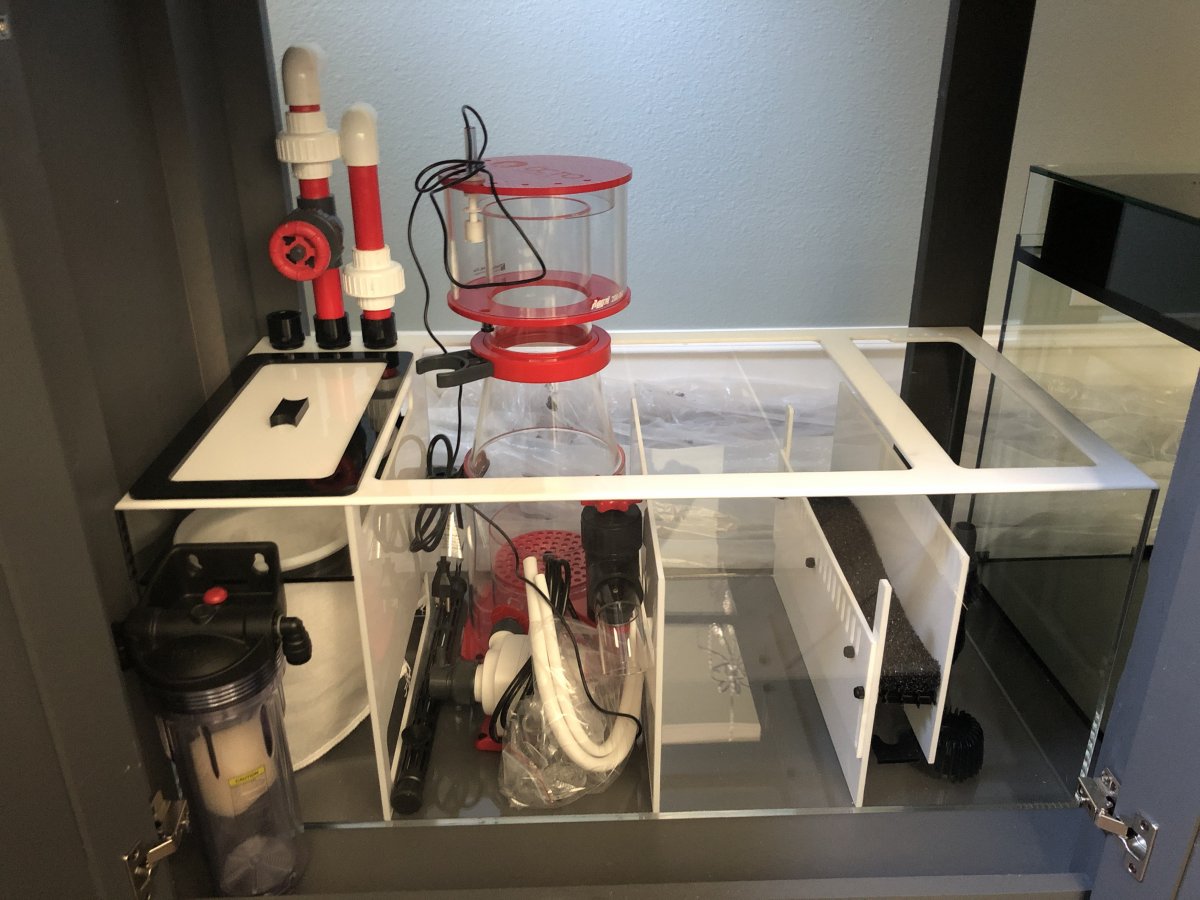 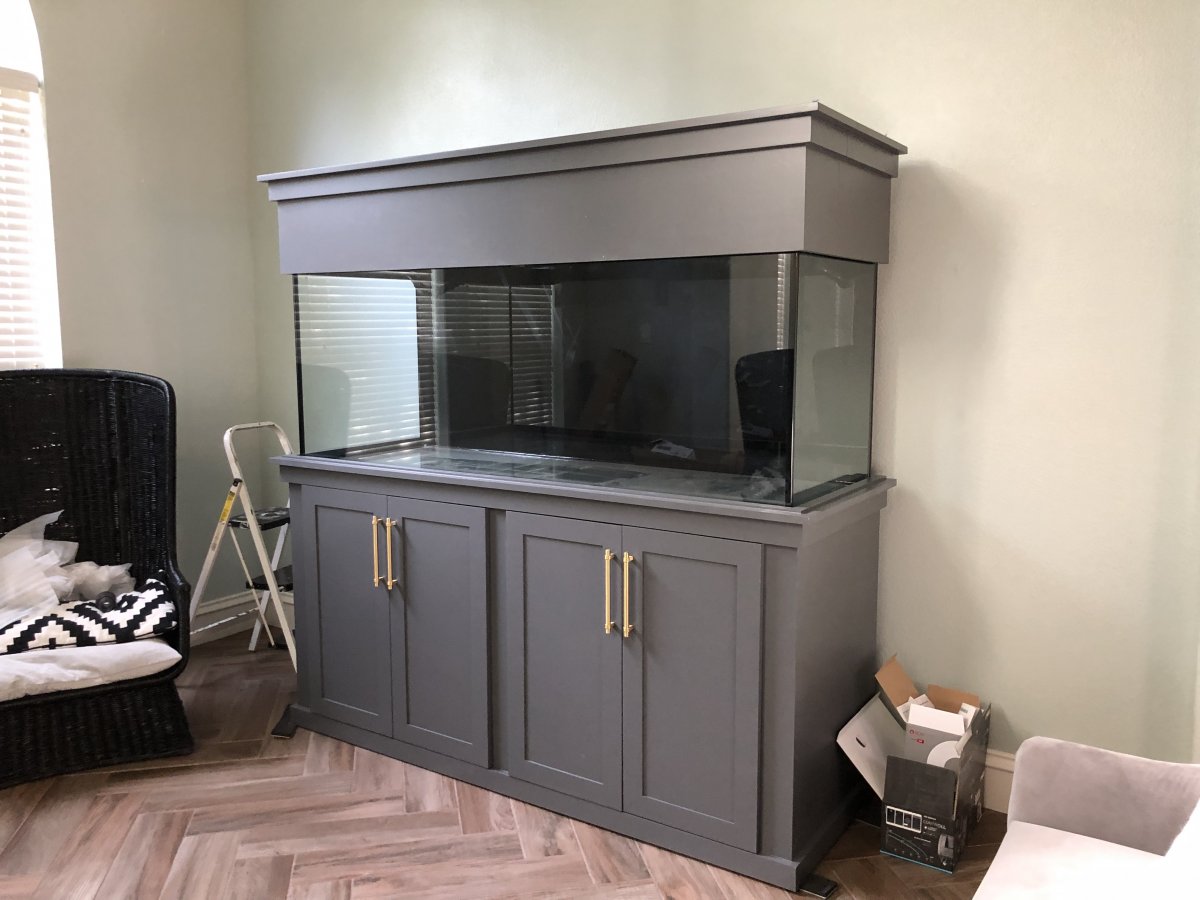 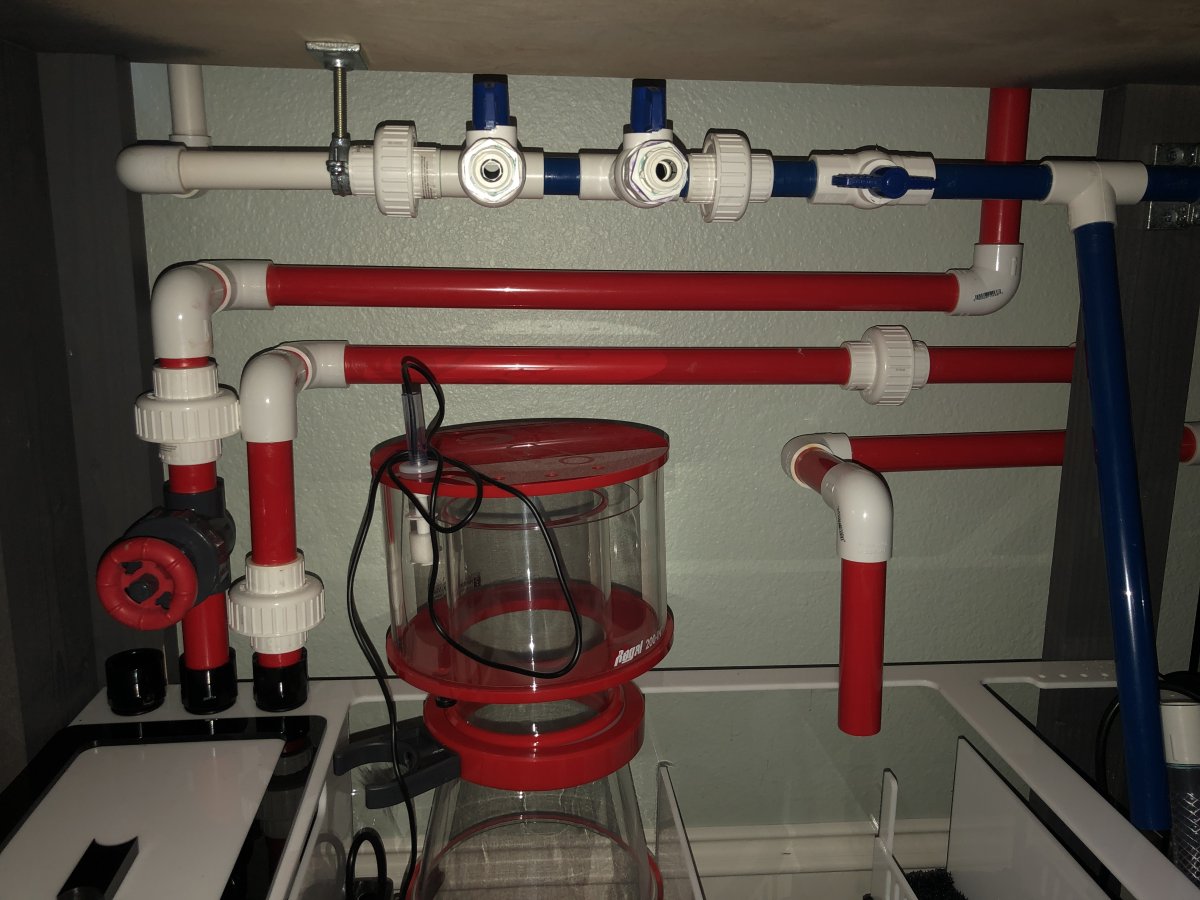 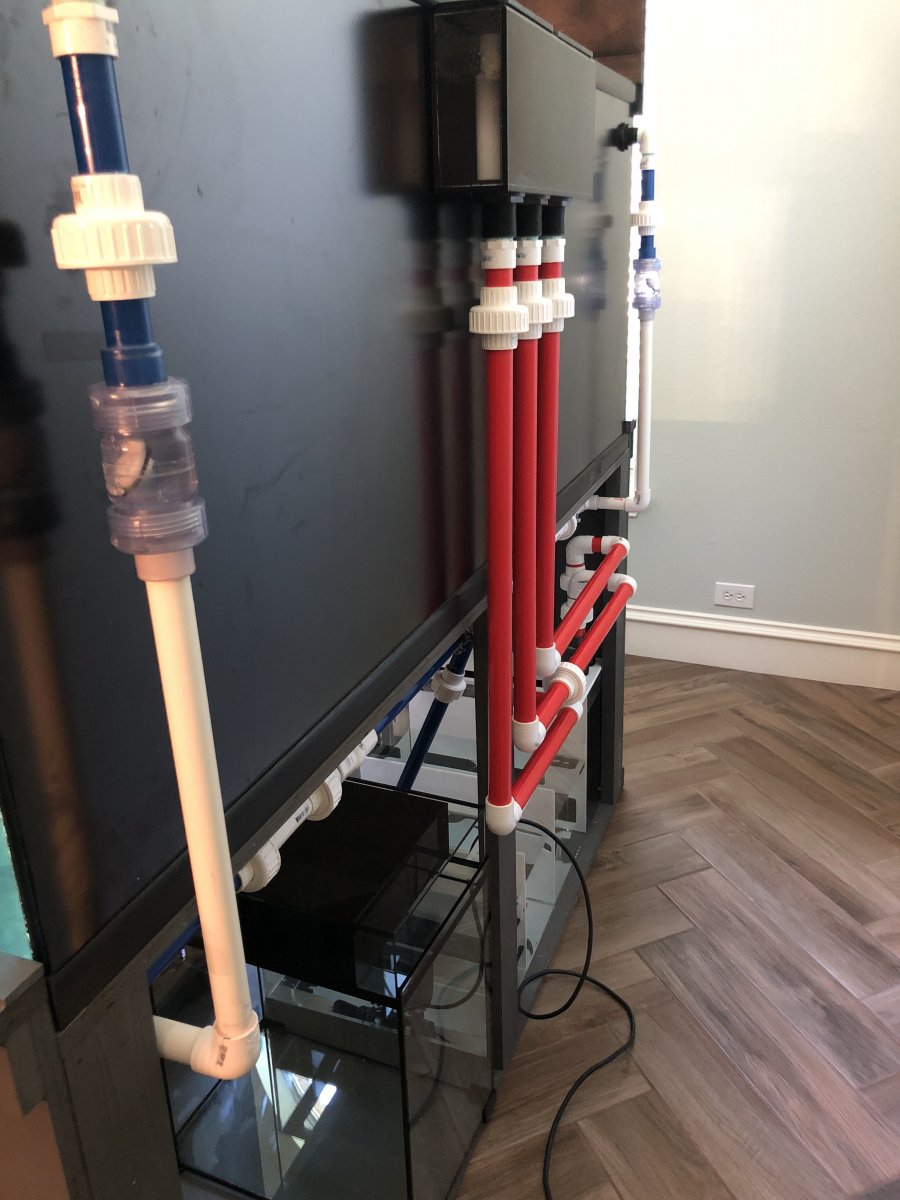 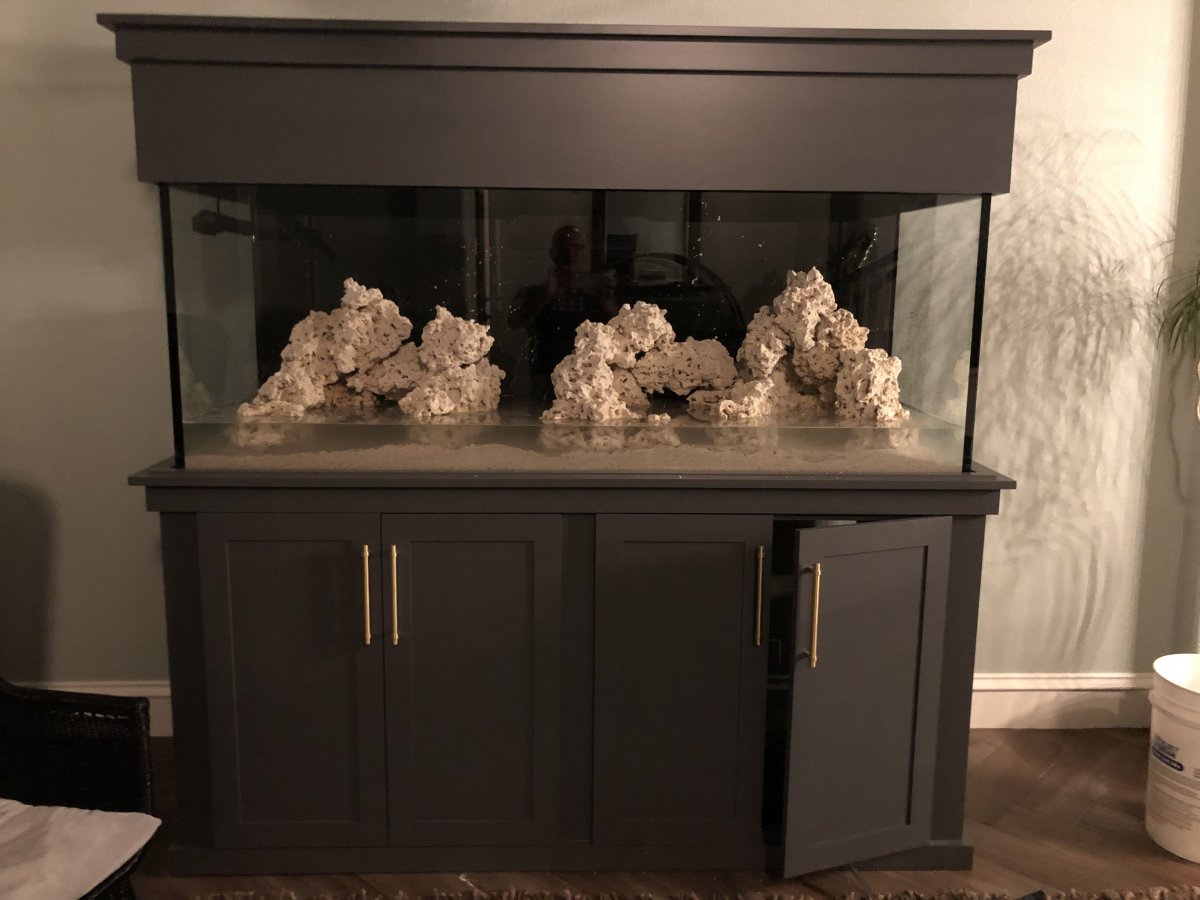 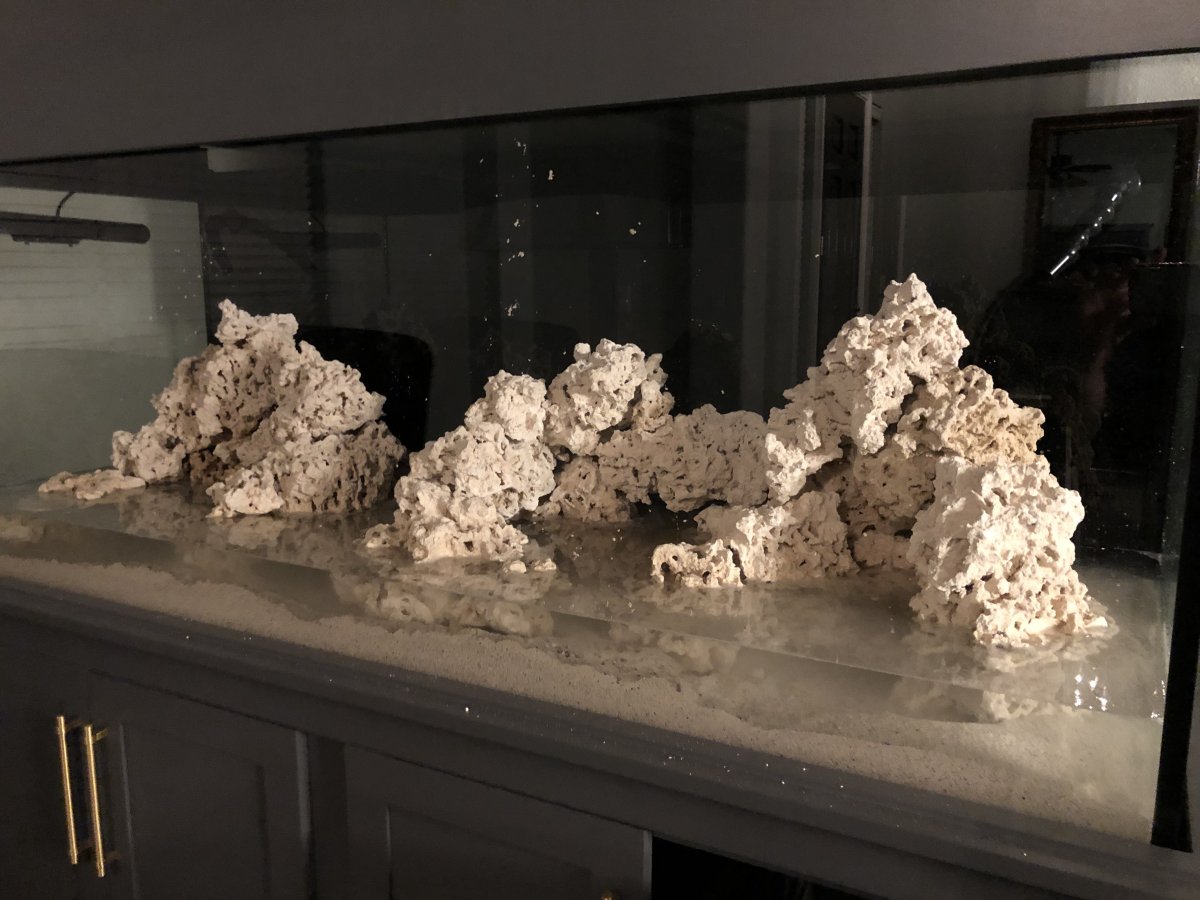 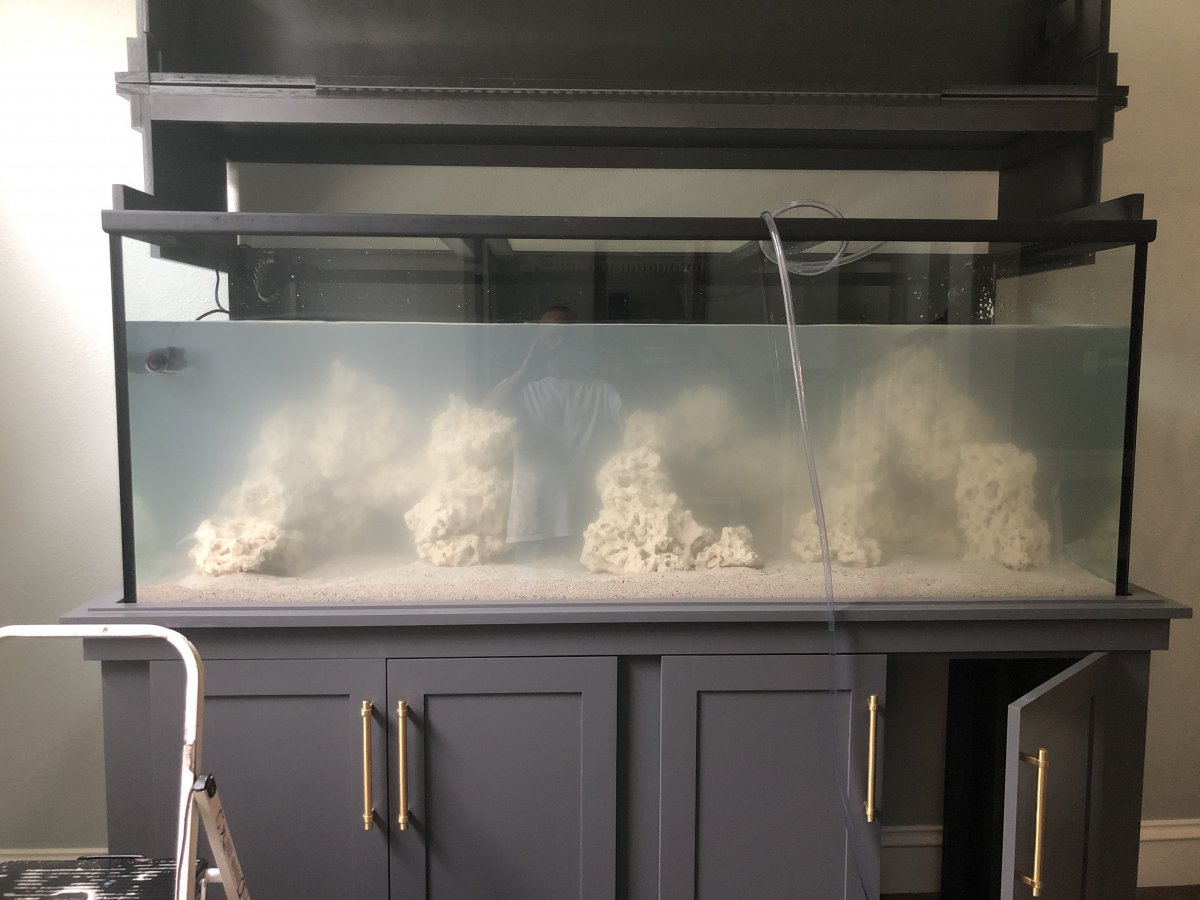 Will also add... using a HANA checker my copper has been steady at 1.87 since 5/27. Will do a full 30 days before transferring the fish to my display. Since I'll be adding all the fish first thinking I'll just set up the display at 1.021 since that's the salinity of the store. Once all the fish are added I'll just top off with salt water to raise the salinity to 1.026.
OP

Tank is filled and cycling. I used 2.5 bottles of Dr. Tim's ammonia and about 1/2 of a large bottle of Fritz Turbo start. Ammonia and nitrite are CLOSE to zero.
Working on all the wiring.

Very nice, my current setup is very similar except my stand and canopy are the knotty alder, came from Dallas North Aquarium right?
OP

RacinJason said:
Very nice, my current setup is very similar except my stand and canopy are the knotty alder, came from Dallas North Aquarium right?
Click to expand...

Correct! Since we wanted the stand and canopy painted they used a smoother wood.
OP

Lots going on here and I've been terrible about updating. Here are the cliff's notes

- Hung the LED's. Went with 4 Kessil 360x.
- Made a "wiring board" to hide all the cords running to the GHL controller. Mounted it with "lift off" hinges and some rare earth magnets.
- Decided I wanted some T5s to supplement the LEDs. Bought a 48" dimmabe retrofit kit and mounted it. Ordered the dimmable break out box from GHL. Has not arrived yet. Dimmable kit says T5's should be run for 50 hours before dimming so letting them run full blast with the LED's for the time being.
- Replaced the Sicce return pump with a Current USA eFlux. The Sicce put out a ton of water and the app was cool, but that pump was WAYYYY too loud.
- Installed GHL optical and float switches for ATO.
- First batch of fish moved from QT to display including: Foxface, 2 Clowns, 1 Orange spot diamond goby, 1 yellow watchman goby, 1 Aussie Harlequin Tusk. The introduction of the fish caused a little bacteria bloom so the water is a little cloudy but everyone is doing great.
- Purchased 5 new fish and put them in QT: Gem Tang, Yellow eye kole tang, Naso (Pretty sure it's a male cause I see streamers), Mystery wrasse, and a royal gamma. 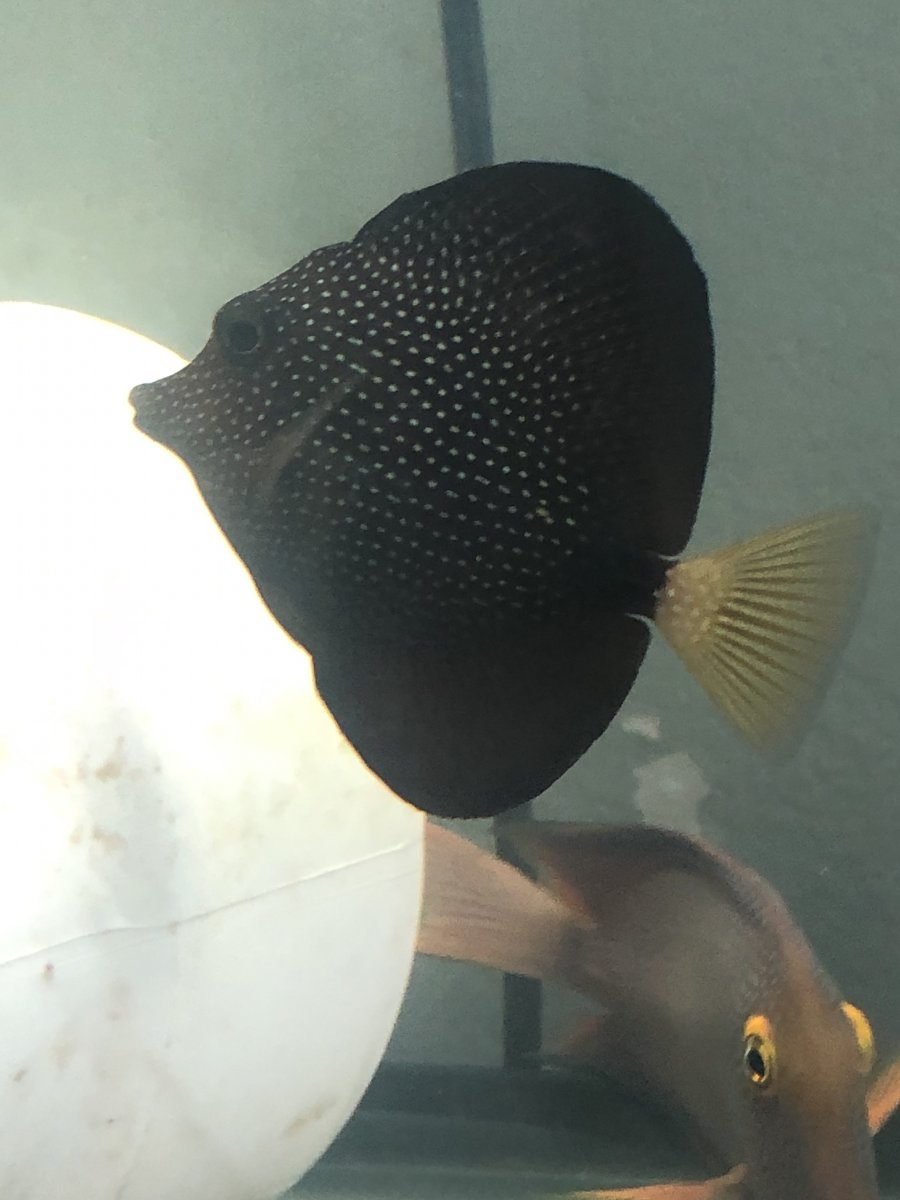 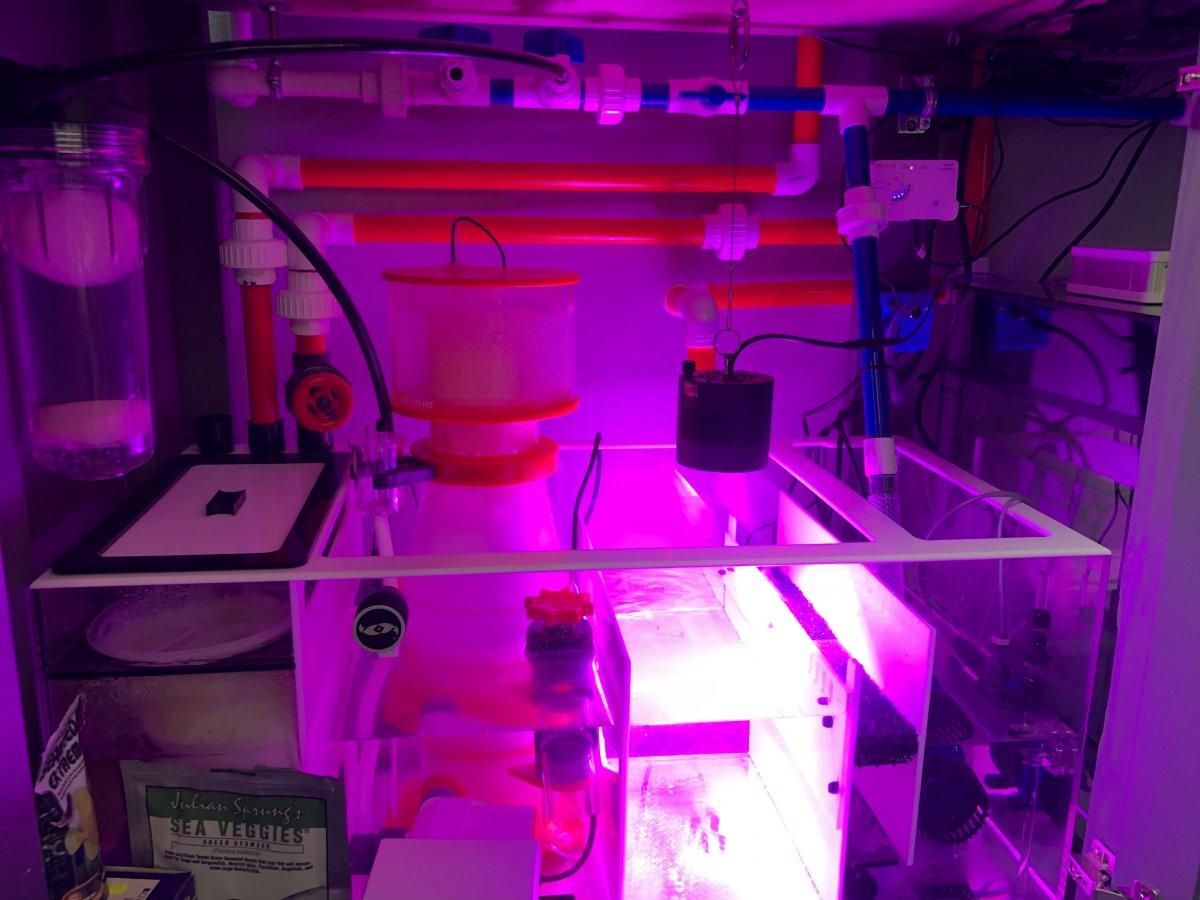 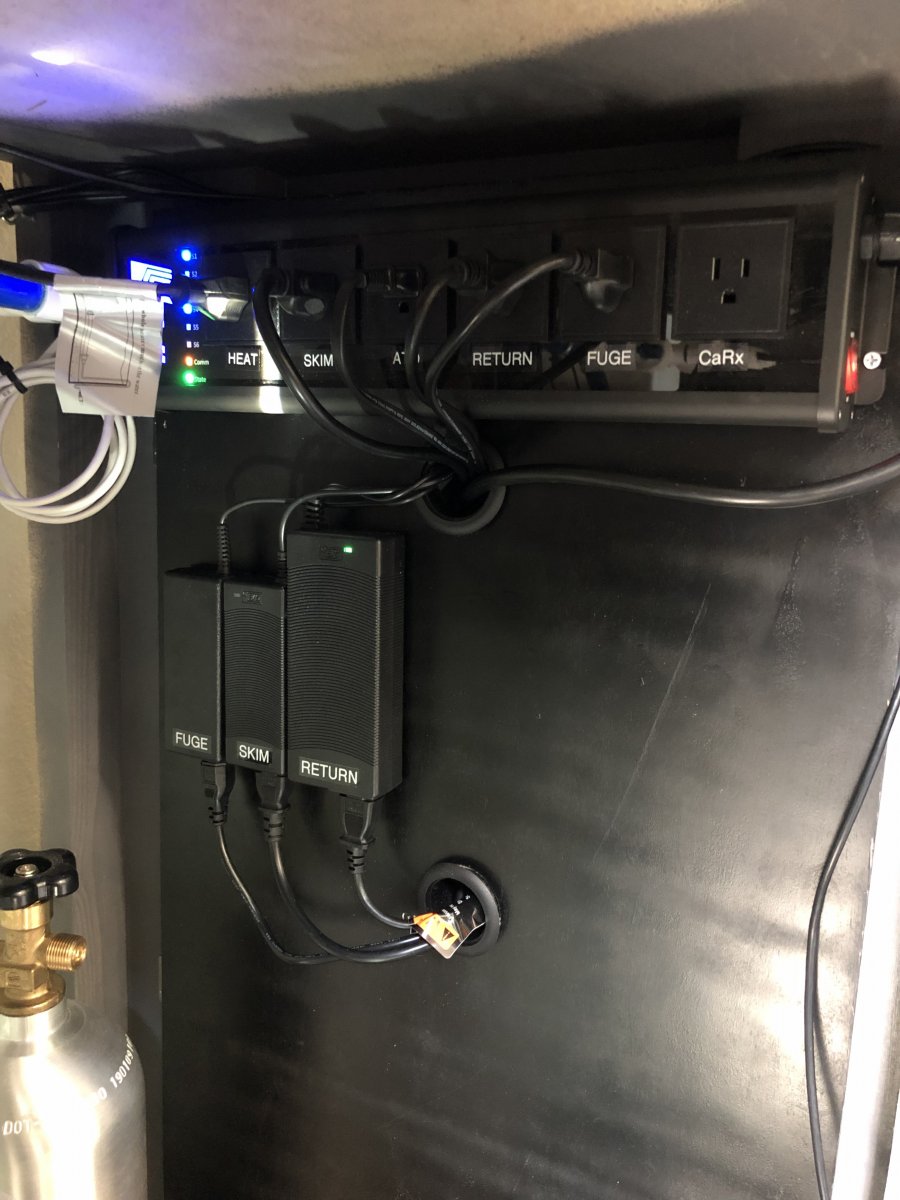 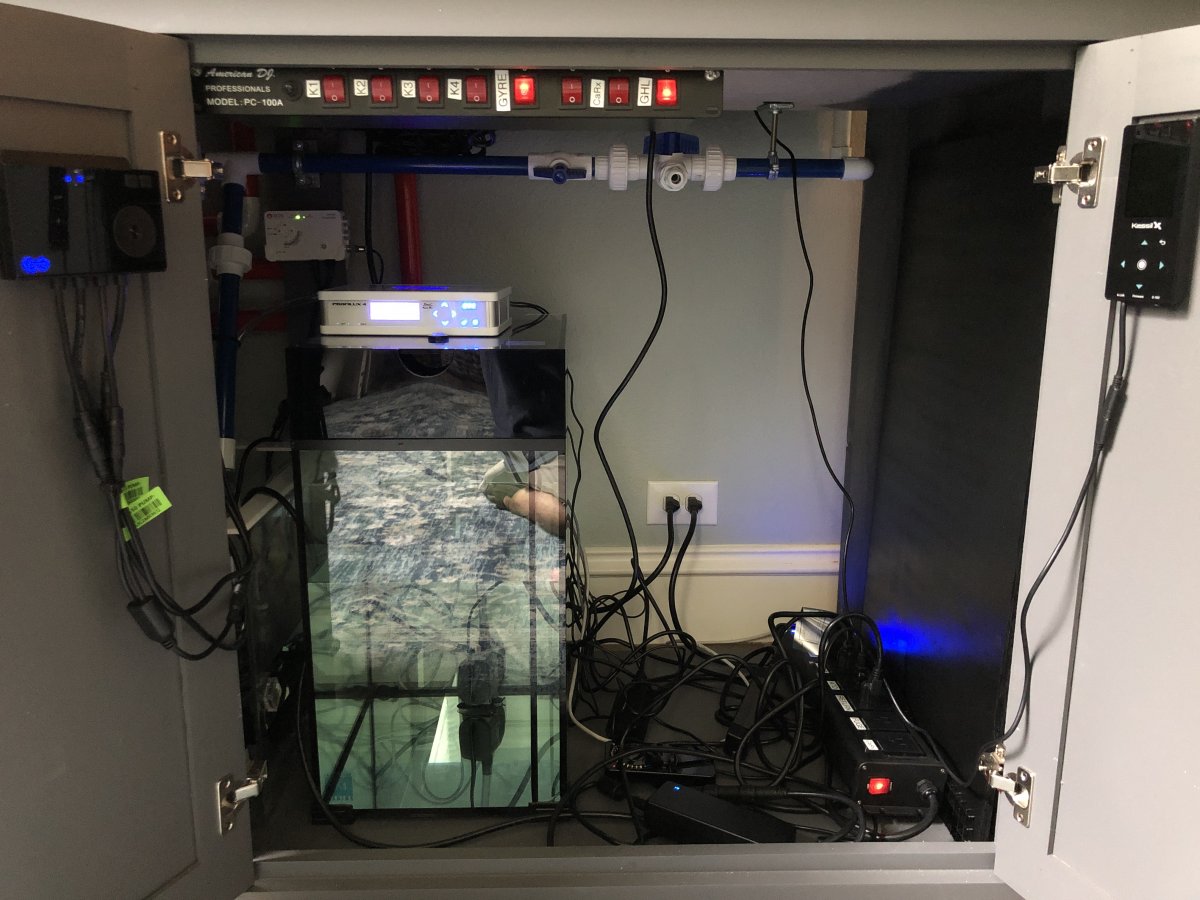 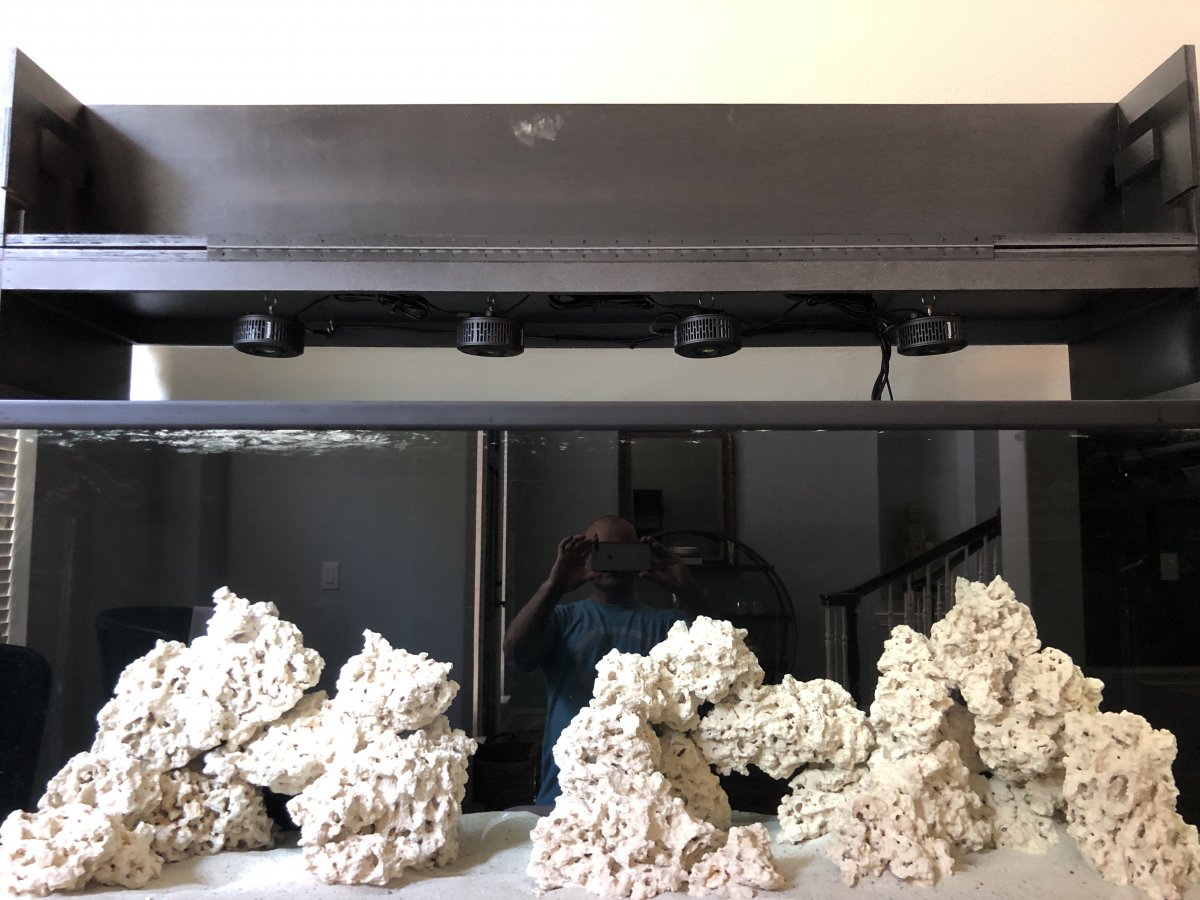