Rating - 0%
0   0   0
After weeks of discussions, changing mindsets, new location, new vs used debate... I clicked the checkout button and now the planning begins.

Some background: this will be my third marine aquarium. About 2.5 years ago I finally jumped into saltwater with a used 120 that I set up as a FOWLER. Was a great learning experience. Had some sad and frustrating times, but learned a lot (obviously). About a year in, I got the coral itch and bought a WB Marine X 90.3. Love that aquarium, the build quality is amazing and have had great success with that tank.

My wife and I recently welcomed our first child into our family this past summer, which also correlated with a promotion and a new role at work. Without question, our daughter takes priority, and trying to care for two tanks has been difficult - especially with the more demanding coral tank on the second floor. So, what to do?

Not long after I purchased the WB, my wife said " you should have just bought one epic tank and consolidated". That montra has persisted and tanken hold. I've always admired larger tanks with the rockwork, flowing softies and euphillia and fish swimming in between. Could that be the better answer? Just one bigger tank to focus on and enjoy? I've continued to ponder and with the split personality maintenance, I had enough and started actively looking.

First thought was to take down the 120 and put something in its place. A nice 5'x2' spot in the family room where we've happily admired the current tank. But with space constraints, would I truly be happy? Would it be EPIC? Maybe, but then another idea / location.

With a growing family, our house will change. It needs to change. This is the reason the WB needs to go, we'll need that room as a bedroom. Likewise, our game room will loose it's pool table and become a playroom. Lots of space in there... Maybe a new aquarium would fit and look good. Tape measure confirms the volume requirements and the more we talk it seems like a great idea. Our daughter loves our tanks and trips to the LFS to watch fish swim and move. She'll like a big aquarium in her playroom, right!? I know I would!

Now to decide on an aquarium. I'm not one to pass up a good deal. There's always used aquariums on here, craigslist, FB, letgo etc. It's helpful to be outside a massive city like LA sometimes. We found some really good deals. One was really hard to walk away from - 8' 300 gal glass aquarium, with stand, sump and stand for $500! A lot of work needed, which in my pre parenting days I likely would have jumped at. But times are different and spending hours resurfacing a stand and cleaning and resealing a tank are hours not spent with my family.

Algae Barn has had the S2 2100 on sale for a few weeks now and I've had my eye on it for longer. Of course I looked at other options from Red Sea, Water box, Clear for Life... But I kept coming back to the Cade. As an engineer, I truly respect well thought out designs. Everything about the S2 oozes thoughtful decisions. The build materials, plumbing, weir design, hidden ATO reservoir.. everything. I liked the other builds, but there were things about each that I didn't like. The Cade kept rising to the top for me.

So after at least the third or fourth time walking away to rethink, I did it. I checked out, clock submit and now we wait. We chose the white build to go with our aesthetics, and of course those don't come in until January. So, we have two months to plan. Two months to figure out all the rest of the details and that's why I started this thread.

So I hope you'll follow. I've got questions, and I hope to get your input as we take this new journey. I promise I'll keep it shorter in the future.
Last edited: Nov 13, 2022

I have AI Prime on my WB and really like them. I've had good growth and like the color.

So my current thought is to stay with AI. I know there's a lot of people on the Radon train, but I'm not convinced I need to jump, especially for the price of the G6's.

Thoughts? Anyone want to inject a panel light like reefbreeder or Sky?

Rating - 0%
0   0   0
I chose a Kessil 500x, reason being spectrum is set, aesthetics, easily controlled via app and Wi-Fi dongle. I had SPS and a clam, I’ve went to LPS for the movement, puffiness and color. The clam still resides directly under the light. I am a prior Radion user, up to Gen5, within a couple months of that I jumped to the Kessil 500x.

How is the color on the 500x? What convinced you to jump?

hikebikebrew said:
I have Kessil 360s with controler on my 120 gal. They came with it, as opposed to them being an independent choice. They are a bit too blue in my opinion, so that colored (ha!) my opinion on Kessil.

How is the color on the 500x? What convinced you to jump?
Click to expand...

Set spectrum, number one reason. Less to mess with. I like the shimmer, looks natural. Wide range of color between blue and whites, able to use other color ie red, green, uv if wanted and powerful. Mount is fantastic, easy to move or adjust. It’s very quiet, I don’t hear any fan noise. Aesthetic, just a small light which really puts out the light , magnetic lenses doesn’t hurt either. I’m impressed with this light after owning all the Radion steps.

Rating - 0%
0   0   0
I think you’re going to love that monster Cade. I’m really liking my little 600 S2. Those new white ones will look really slick in the right environment.

I’ve had custom Planet, Elos, Waterbox, and now Cade. And seen plenty of Red Sea. Elos makes a gorgeous glass box but as an overall system, Cade kills it. Like you said, they really thought everything through and the stand is awesome.
OP

I have AI Prime on my WB and really like them. I've had good growth and like the color.

So my current thought is to stay with AI. I know there's a lot of people on the Radon train, but I'm not convinced I need to jump, especially for the price of the G6's.

Thoughts? Anyone want to inject a panel light like reefbreeder or Sky?

Congratulations on your choice!
I have AI Hydra 52 HD on my 140 G mixed reef and they R fine. I PAR mapped my tank and PAR is 100 at the bottom and 260 at the top, with lights 12" above water [email protected] 70% power.
If you choose AI, 64 will give you deeper light penetration than 32 especially that your tank is quite deep! Newer generation(G6) Radions seem to be more advanced and if I were to buy a new set, I would definitely consider those.

I have a DC Hygger in my 120G running steady for over two years. I have a Sicce syncra in my WB. Between the two of them I actually prefer the Hygger. It's quieter, and draws less power at nearly twice the flow rate.

For the new build I was debating a Varios, but that price just makes me think twice. Anyone have thoughts on the Varios line? What about simplicity pumps?

I want to stay DC to have the controllability.

Also... I am debating a dual return with check valves and a Y splitter. If I went that way, I'd likely gow with slightly smaller pumps in the 2k gph range each (total volume is 284).
OP

I've watched Randy's BRS investigates video a few times and I'm almost convince for my goal of a mixed reef the 32's might be a better way to go. I don't think I need the power of the 64s, and I like the slightly higher 14" height they recommend for the 32's...

Anyone have a similar tank and what they did???

Cell said:
Putting an aquarium in a room where kids will routinely be playing can be risky.
Click to expand...

True, always a risk there. But there's always risks with aquariums. Just have to do our best to plan and mitigate for them.
OP

I decided to go with 4x Hydra 32's. I think for a mixed reef they will get us the output we need, and if we need more output adding another 32 wouldn't break the bank.

I think we're going to wall mount a light support and have a floating canopy. Plenty of time to figure that out though.
OP

Lights arrived quickly and well packaged, thanks to BRS! They look good, but I do have to say seem smaller than I thought they'd be. Hope four will be enough, or I'll be looking to add. 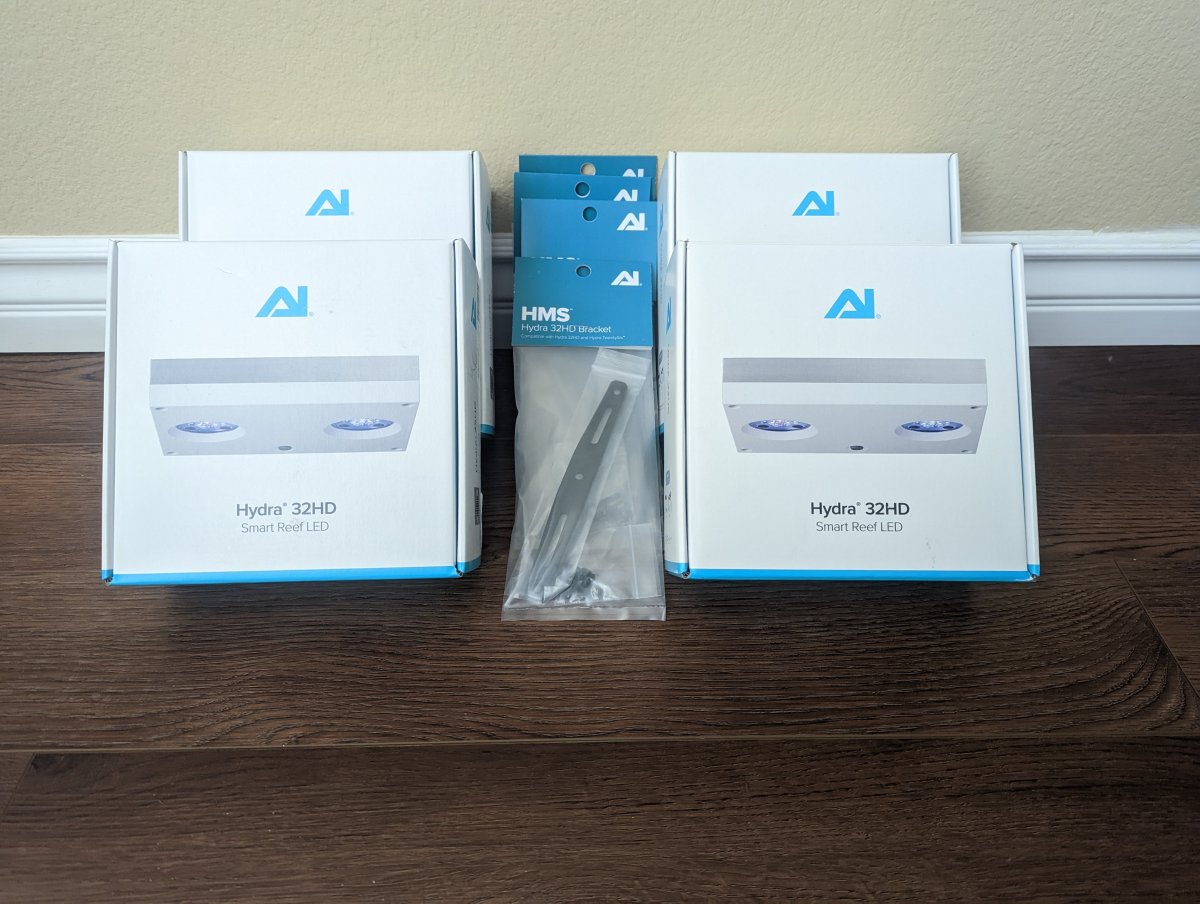 Rating - 0%
0   0   0
Also saw a good deal on Arag Alive Special Grade sand at $14/20 lb bag, so I ordered 5. I was debating trying to reuse sand from the running tanks, but since I want to cycle the CADE before taking either down, that would be really risky and just not worth it. Not sure I'll need all 5 bags, but wanted to have it just in case.
OP

Was able to talk my wife into an auto water change. Will keep a plastic rain barrel (50 gal) in an adjacent room and run water lines in and out of the room the aquarium will be in. Excited about that. Gotta decide if I want to use a DOS or something else. Any recommendations?

Was able to talk my wife into an auto water change. Will keep a plastic rain barrel (50 gal) in an adjacent room and run water lines in and out of the room the aquarium will be in. Excited about that. Gotta decide if I want to use a DOS or something else. Any recommendations?
Click to expand...

I use two ecotech versas. I also use a third one to fill my ATO reservoir
OP

Cade Altumate is the ultimate sumped system for fresh or saltwater