Guarding against electrical shock: What steps do you take?

I once had a wire going to my skimmer pump that rubbed the coating off and I would get shocked while doing maintenance it took me a few weeks to find it.

Brew12 said:
The bird on a wire analogy doesn't apply in reef tanks. The reason a bird isn't shocked is because the air that surrounds it is an insulator.
Saltwater is much more conductive than the fish itself. Even with a path to ground, such as is provided by a ground probe, the vast majority of current will flow around a fish anyway. This is why you can't electrofish in saltwater, only fresh water. It's too difficult to shock a fish even with equipment specifically designed to do so.

It is very unlikely for electrical shock to kill a marine fish. Heating caused by, or toxins released by a failed electrical component are a more likely cause if there is an associated electrical fault.
Click to expand...

Thanks for the clarification. What's your thoughts on having/not having a grounding probe attached to an aquarium ?
A

Always use GFCI. The plug in modules are inexpensive especially compared with electrocution, Ground probes and fused/breaker power strips are insufficient protection where water, especially salt water is involved.
R

Remember if you use a UPS your GFIC must be after the UPS or else it tripping will just your UPS think the power is out and it will keep supplying power.

1. How do you take care to guard against electrical shock or electrical mishaps around your tank?

Form a loop with cords, elevate power controllers and use of both GFCI outlets and ground probes.

2. Have you ever been shocked or had an electrical mishap that was aquarium related?

Electrical mishap - yes due to failure to provide drip loop, and other stemming from a leak. For shock - return pump

I've been mildly shocked a few times but nothing serious.

The worst thing that has happened was a PC Flo light caught fire while I was out of town. It caused the circuit to blow and I lost power to my system. This resulted in the death of nearly all my fish which was a huge bummer. My roommate at the time called me and let me know. He had also been out of the house for about a day. Bad timing all around. Luckily, I was able to get a replacement light and credit for the fish (around $1,300) because my LFS really went to bat for me. Ugh, I had a great assemblage of fish then... all started out as very young juveniles and grew into beautiful adults or sub-adults. I do still have the goby and he's over 17 years old.

I haven't been shocked, but a few years ago, I had an older bow-front aquarium leak. Although I thought I had sufficient drip-loops in my electrical cords, water from the slow leak traveled to the other side of the tank and came into contact with an electrical cord and continued to the plugin. This resulted in a small fire at the plug. Fortunately, I had several family members at home at the time and they were able to put the fire out quickly with hardly any fire damage. Unfortunately, the approximate 12 gallons of salt water that had leaked resulted in $17K of damages to the house. We were extremely fortunate, as just a couple days later we'd all be gone on vacation and the entire house most likely would have burned down.

As a result, I no longer setup larger aquariums on upper floors (to better contain any leak), I stick with 90-degree corner seal aquariums (expecting stronger seals), and ensure proper drip-loops are always in place. I also now have everything in the DT plugged into a separate GFCI outlet, everything in the sump plugged into its own GFCI outlet, added grounding probes in sump & DT, along with incorporating redundant heaters & controllers, just to minimize the potential for any future electrical issues.

After reading these stories I think I’m just going to get into the habit of always wearing rubber gloves when working with anything in my tank. It would have the added benefit of avoiding contaminating my water with whatever is on my skin, and would also protect me from M. marinum infections, palytoxin poisoning, etc. Just ordered some elbow-length ones for deep jobs.

30+ years of construction I've had my fair share of zaps. Thankfully non so far from my tanks (knock on wood).

After a few shocks and near zaps I am 100% GFCI outlets and Ground Probes (multiple) for all my Tanks systems (Tank and Sump).

Here is why. (GFCI alone on a non-grounded device [ eg. Two Prong Heater], can still result is a zap, but not electrocution.).


Of course testing your GFCI outlet every few month is something we should do but not everyone does (including me).
I had two GFCI outlets go in last 10 years, so they don't last forever.

revhtree said:
Electricity and water don't mix as it is bad for your health! Running an aquarium shouldn't cause us to fear things like electrical shock but we should have a healthy respect for it and take precautions when setting up a tank and working in our tanks. Let's talk about it today!

1. How do you take care to guard against electrical shock or electrical mishaps around your tank?

2. Have you ever been shocked or had an electrical mishap that was aquarium related? 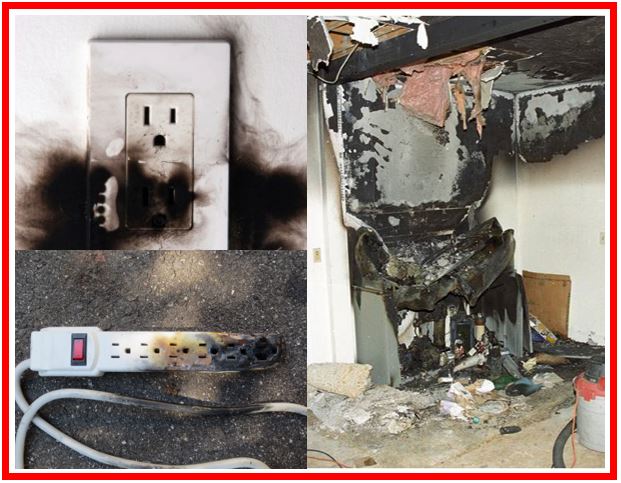 OMG this brings back memories. I got up one morning to see water on the floor and half the tank was empty. My clown fish were on the floor and I did not notice the stripe was laying on the floor and went to pick up the clowns and touched them and the current went right through me and I quickly dropped the clown. The clown was not injured at all. I quickly put water in a 20 gallon and switched all my fish over to that. I then drained out the rest of the water in the 100 gallon and was able to reseal it and then fill it back up and put everything back. I have learned from this to have wires and cords off the floor and protected.

dlaird76 said:
Thanks for the clarification. What's your thoughts on having/not having a grounding probe attached to an aquarium ?
Click to expand...

I won't run my system without a ground probe/GFCI combination. I also won't run my system on just one GFCI. Ideally, I would have 1/2 my power heads, 1 return pump, and 1 heater on each GFCI. This will definitely be how I set up my next system. Since I only have 1 return pump on my current tank, I keep my power heads on a separate GFCI from my return pump. This way a single GFCI trip won't cause me to lose all flow.
With my system set up the way it is, a GFCI trip won't cause any harm to my aquarium for many hours. Contrast that to a pump/heater failure where it may not be de-energized immediately. That can heat the tank and release enough toxins to wipe your tank very quickly. The best thing you can do is de-energize it, which the combination of GFCI/Ground probe will do in milliseconds. With just a GFCI, it could still leach toxins in your system until you put your hand in the tank.
R

Had a gfci trip that was caused by hang on back protein skimmer outlet tube 50% clogged with algae that formed and then filled up ,and leaked onto outlet. Really happy to have had the gf outlet!! Middle of the night also—whew!!
T

Come home from work smelled ozone and smoke. Power failure sump below the tk overflowed at the time I thought a check valve would stop an overflow. Tank was half empty 40 gal tank. The overflowed sump splashed on the elec outlet causing a short that caught fire spread to the stand but apparently the over flowing sump put out the fire. Important lessons learned. No check valves ; install drip loops; elec outlets as far away as possible from the tank and sump

I have been shocked dozens of time over 35 years. Bad pumps, bad heaters mostly. stopped putting them in sumps. just shake it off and thank GOD

N.Sreefer said:
Had a aquaclear heater that turned black and had a hole melt in the glass (underwater) and heated my tank up to 96f all while I was at school. When I got home my tank looked like an oil slick smelled awful (chemical smell) and everything was dead. Stuck my hand in to pull that heater out and nearly passed out from the shock it gave me (unplug first I'm a dummy!) That was back in 2006 and I didn't have much livestock in the tank but it was a harsh introduction to the hobby. I switched to jagers and haven't looked back at least when they crap out they don't melt.
Click to expand...

You don't want to unplug first. You want to go hit the breaker box switch!

So from what I got out of this thread is that electricity in the tank ''shouldn't'' kill inhabitants?
A

You guys are freaking me out lol I've been so enthusiastic I didn't even think about this possibility. Healthy reality check
A

Q43 said:
After reading these stories I think I’m just going to get into the habit of always wearing rubber gloves when working with anything in my tank. It would have the added benefit of avoiding contaminating my water with whatever is on my skin, and would also protect me from M. marinum infections, palytoxin poisoning, etc. Just ordered some elbow-length ones for deep jobs.
Click to expand...

Dedicated Electrical Circuits? How much did you spend?
2 3

QUESTION OF THE DAY Medicating Corals: What do you keep on hand and what actions do you take?
2 3

QUESTION OF THE DAY How important is coralline algae to you and how long did it take?
2 3 4