How do y'all afford the hobby?

Savings :/ & any money left over when I get my pay

If it ain't broke, fix it till it is.

It’s not cheap, but there are ways to do it cheaper. Look for good deals used. Don’t need a whole lot to keep a reef going with soft and LPS corals. You can buy salt online from chewy with free shipping. Don’t need things like controllers and all the fancy equipment. I would recommend a auto top off and good skimmer.

Be content with what you have as a priority, being grateful for what's in front of you. Yes, an upgrade might be nice, but it appears you're putting the idea of something more above the system you have right now. That's a mistake. Enjoy what you have.

Further, I think you falsely conclude that those that upgrade quickly only do so because they can now afford it; people make changes on reasons far beyond just financial, most of the time I suspect they get into the hobby, learn quickly through that initial experience, then want to build something more in line with what they now know. They probably could have started big but where intimidated.

Screwgunner said:
A 125 all lit up with pumps and rafugium or algea turf scrubber will run you 125 dollars in electricity a month so keep that in mind.
Click to expand...

Totally depends on where you live.

I saw almost no difference going from my 120 to my 250g in my electric bill. That's what happens when you pay 8 cent per kwh

Just want to say that I’m enjoying the responses to this one! Lol No matter what you have, you’re always going to look at someone else (for me it’s usually driving down the road and seeing a $250k car drive by) and ask yourself how. Hobbies aren’t cheap..especially this one, but it sure is fun!

WVNed said:
I find these threads amusing.
We paid $54,000 for our first house. 3 bedrooms and 2 1/2 baths on a fenced corner lot with a garage and full basement.
The cost of a mid model pick up truck now.
Yes this hobby costs more than it ever has. So does everything else.
I sold my truck and bought a small car.
Almost like magic the 10 gallons to fill it up costs more than 18 to fill the pickup I traded in.
Click to expand...

Have to commute to the Bay Area for work to afford all my nice things. (Truck driver for Tesla)

That help a great deal.

Research, research and more research. Spend as much time as possible in this forum go through every single post and learn what other people are doing (good and bad experience). Ask as much question as possible. Only trust 50% of what the LFS tell you. Remember they are the one who sell you stuff for butter and bread. Patient and more patient. Nothing will change overnight except bad thing.

Everybody's financial situation is different. Some people make $200-300K a year and setting up a 180 gallon tank is affordable. Some people wait tables and live in low income housing, and run their tanks using nothing but the cheapest amazon specials they can find. I have local friends in the hobby that satisfy both of those roles and many in between as well. The ones that are head scratchers are the ones whom I know how much they make, yet they spend WELL beyond their means, not only in this hobby but in life. Instances like that are likely funded by family money/trusts.

Beyond that...I think most people CAN afford nearly anything they want in the hobby, they are just wise to not over spend. Just because we CAN afford something doesnt mean we SHOULD. If I felt so inclined I could go out and buy myself a Reef Savvy or other top shelf tank in the 300+ gallon range, and use all ecotech gear to run it, and go on a coral spending frenzy. But that would be reckless spending on my part and irresponsible when I have several children. I spend what amounts to an unnoticeable amount each month on my hobby which is for my amusement alone, and when I make major gear upgrades, I try to fund them at least in part by selling older gear. Just some of my thoughts on it

I use two ways, first of all, I keep nanos. I have a 10 gallon nano, which is doing pretty good. Second of all, i dont buy 20 million dollar corals, just why. Third of all, I use my moms amazon prime. No shipping costs on salt.

add all that up I bet most ppl spend a few hundred a month. i would rather have reef tanks.
also do side gigs when I need stuff.

the thing is, we must live and reef with in our budget.

I’m fortunate enough to make enough to buy pretty much whatever I want equipment wise (within typical ranges of tank size etc.). However, I use black boxes, jebao pumps, buy used sometimes because the truth is, you don’t need the most expensive stuff to have a great tank. I don’t get spending $400+ on a single wavemaker (particularly as much as I hear complaints of failures) when a $50-$100 wavemaker will do a great job. Besides, I’d like to retire someday sooner rather than later

Start slow. It’s tough to go and set up a large tank in a single day now with how much anything costs. I’d love to 60+ gallon tank but the costs are just too crazy right now.

As for livestock. I like to identify a handful of nicer corals I want and then I use cheaper filler corals to fill the tank. Zoas are great because you can get every color under the sun for relatively cheap. Same for acros as well if you’re willing to get run of the mill stuff

I dont pay bills or taxes

For me- good wage but also overtime .
Like me, you Have to Budget: 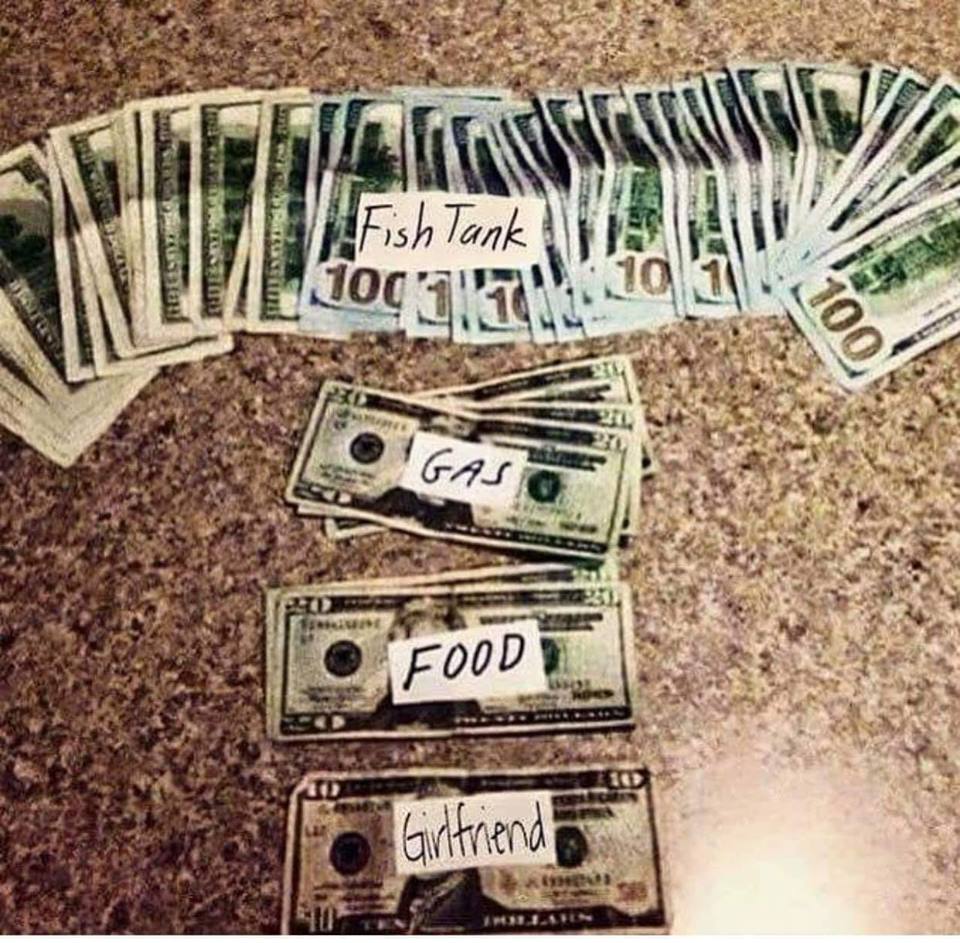 Rtaylor said:
I’m fortunate enough to make enough to buy pretty much whatever I want equipment wise (within typical ranges of tank size etc.). However, I use black boxes, jebao pumps, buy used sometimes because the truth is, you don’t need the most expensive stuff to have a great tank. I don’t get spending $400+ on a single wavemaker (particularly as much as I hear complaints of failures) when a $50-$100 wavemaker will do a great job. Besides, I’d like to retire someday sooner rather than later
Click to expand...

Are you paying 50 dollars for a fancy water pump?

B
Need to buy a new light!!

B
To buy KP rock or not- That is the question!

M
Can you put multiple chocolate chip stars in a 125?