Keeping your aquarium cool WITHOUT a chiller?

My tanks are in the basement (in a room that's completely underground,) where it stays 70 year round. My tank at my office sits close to a overhead vent where it fluctuates between 68-70. My tanks are always at 75-76
B

I keep the AC in the house at 74. That's my chiller! The heat produced from the lighting is generally enough that the heater doesn't turn on. I have a 180. I'll open the canopy doors if the water temp ever reaches 79.

While I do have a chiller it runs much less often than it did when I first got it. First step was no more glass covers, replaced with mesh. That saved me several degrees. Lastly was replacing every pump in the sump with a DC version. Now instead of the chiller going on every 90 minutes it is more like every 3-4 hours if at all.

Unfortunately, I'm the minority that requires a chiller to maintain temps below 80. 1\4hp on my 100 gallon Acropora tank.

revhtree said:
1. How do you keep your tank cool WITHOUT a chiller?
Click to expand...

Basement reef is very temp stable, only needs to be heated.

revhtree said:
2. Do struggle to keep the tank temps down during the warmer months?
Click to expand...

Do people who need chillers not have A/C? I couldn’t imagine my house being 80°+ in order to have the need for a chiller….

this is a serious question, do you only need a chiller if your tank is not in an ac area?

I don't have a chiller for my DT per se, but do have a drop in chiller on the stand by. I mainly use it for my mixing station which is in the garage, but given that it's portable, I can move it to the DT if needed.
For my DT, I keep the room at 73 during the day and 70 overnight. By about 6p the DT usually creeps up to 78.5, but not much more. Drops overnight to 77.5 or so.
My DT has a canopy, and if it heats up too much, I plan on opening the canopy and running the ceiling fans. Or worst case, grab the drop in and put it in the sump.

I live in Southern California and originally struggled to keep tank cool in summer months. Problem is the high humidity here, it limits how effective evaporative cooling can be. I'd use fans for about 1-2 degrees F chill, then frozen water bottles. I've since gotten central AC, and my oh my.. what an improvement.

Problem is now power outages.. All three of my cooling systems would fail with sustained power outage. And when does the power go out in California? During a HEAT WAVE, often while the WHOLE STATE IS ON FIRE. Which is our new summer reality unfortunately

I have central air and my tank is in the basement.Keeps a go steady temp all year. I also live in canada so it is pretty cool up here compare to down south.
A

an example for that ffrm Cielo Co.

TheHarold said:
Ive made a surprisingly effective system for my tanks. A SINGLE fan, powered by the apex 24v accessory port, gets me well over 4 degrees of cooling on a Reefer 350 (~75g). My tank used to spike to 82+ but now it stays within .2 degrees of 78. Waterproof 140mm Noctua fan. You can also daisy chain a bunch for larger tanks, because these fans draw so little power. 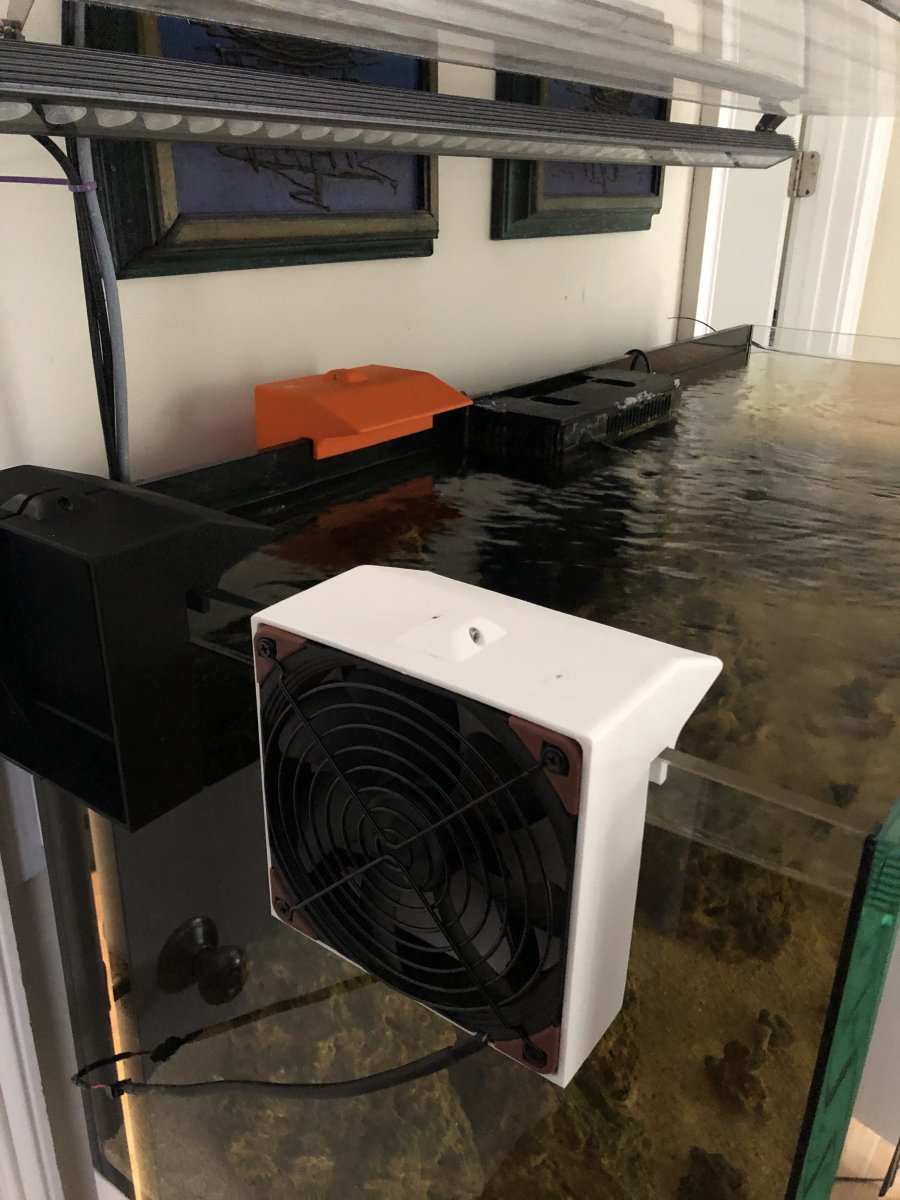 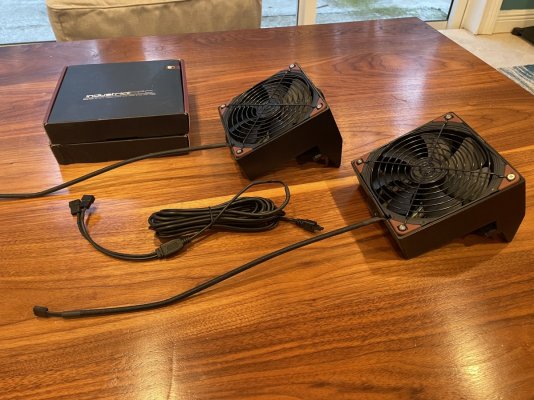 @TheHarold How loud/quite are those fans?
Looking to replace a couple of sever cabinet fans I'm using!

I have a row of 8 fans controlled by my apex and I only put it on the tank in summer. I only need it about 10 to 20 days a year.

revhtree said:
Well we're already in the 90's here in the northern part of Georgia and the reef tank is warming up! I'm thankful that mine is currently in the basement where it is naturally cooler but it's still getting warm enough to warrant something to help keep it cooled. But I have no chiller and have no plans to add a chiller! So what do I do? Well for me and my situation a fan directed on the top of the sump water keeps me 3 degrees or so cooler so it works just fine. But what about you? Today let's talk about!

1. How do you keep your tank cool WITHOUT a chiller?

2. Do struggle to keep the tank temps down during the warmer months?

This is the baby that helps keep my thousands of dollars worth of livestock alive during the hottest months! PS. Plus it's great for spills! HA! 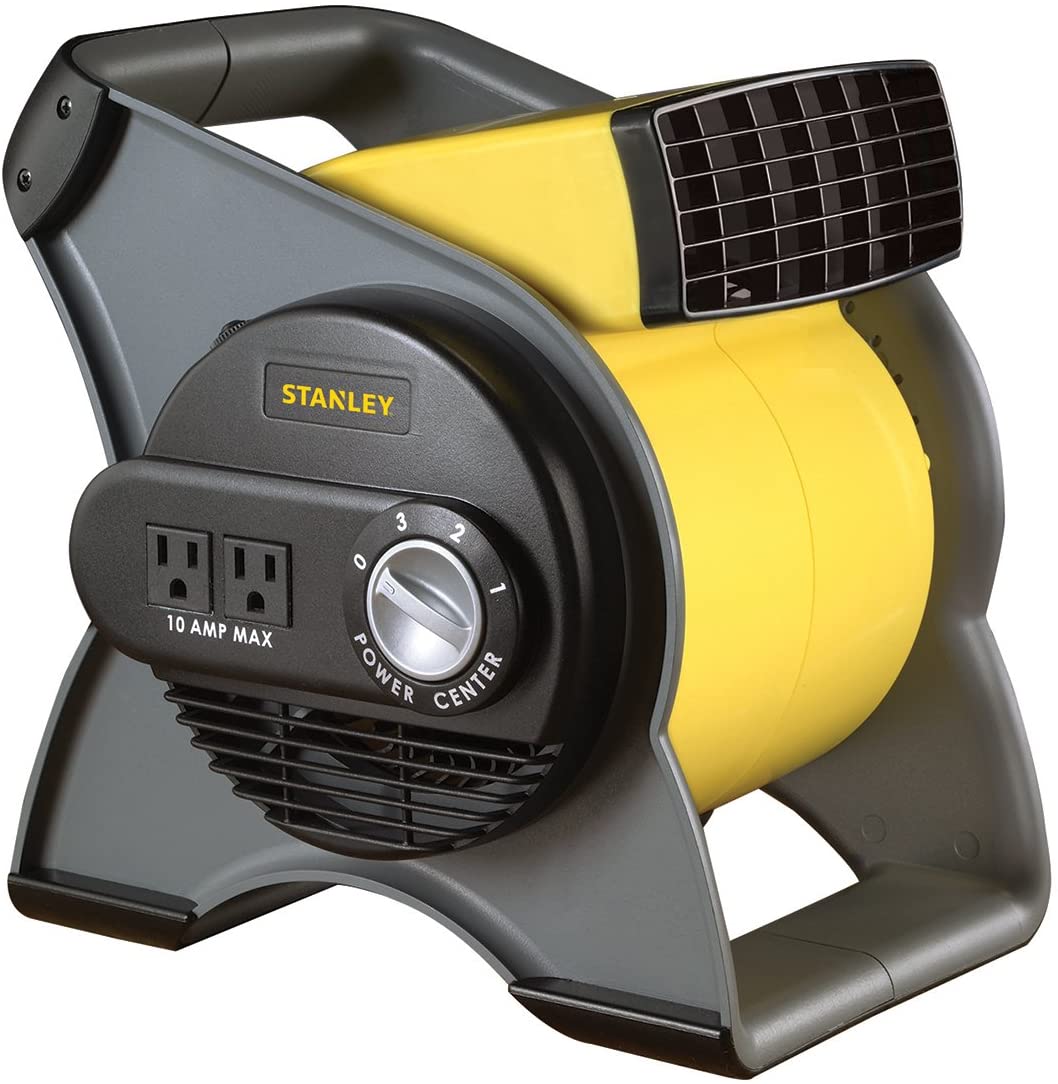 Garf said:
I live in the UK.
Click to expand...

Not going to need cooling this year by the looks of it.

Garf said:
I live in the UK.
Click to expand...

Yeah me to so hot weather not a issue whatsoever, apart from once in a blue moon possibly,or power cuts, i cant even remember last time we had a power cut,maybe 20 years ago and i remember we got notice it was happenning ( probably pre planned maintenance or something)
Im new to saltwater but had freshwater for quite some years now,i see my heaters come on occasionally on freshwater tanks but only one heater,one filter and the t5 lights on them.
On my newly set up saltwater tank ( 9-10 weeks since wet) the water stays pretty much constant at 25 degrees throughout the day and drops 1 degree at night after lights been out couple of hours.and i hardly ever see the heater ( which still got in main display tank come on at all,will put it in sump with other heater when get around to it lol) heater in dt set at 24 degrees and heater in sump set slightly lower at 23,i can only guess why the heater isnt coming on that i can see,because tank got canopy and glass splash panels above water so t5's producing heat and glass panels and canopy keeping heat in.
More equipment each giving off heat in dt or sump and still need install skimmer and ato but doubt that affect heat to much. 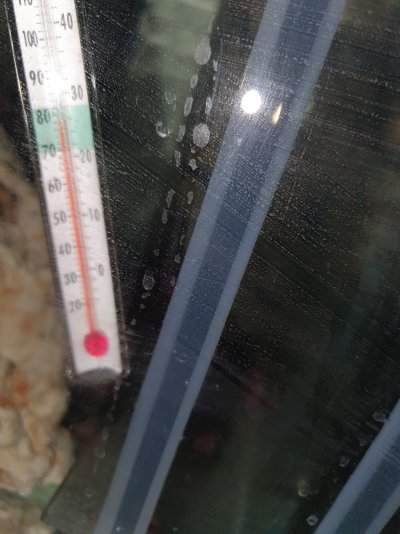 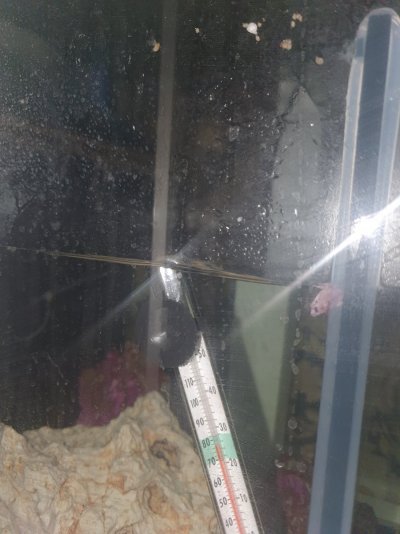 Edit : i live in northern england and even though in summer right now,at midday today,hottest part of day it probably only 15 degrees °c and even when weather gets what we call really nice its like 24 degrees °c or above ha ha then i would call that a very hot day.and only very very very rare occasionally we have temperature over 100 degrees fahrenheit.so chiller is one less expense im grateful not to pay.and i read on r2r the other day one reefer in a thread saying his electric bills roughly $3- 400 a month of have ac on to keep room where fish tank is.so thats like £270-£360 and in contrast my electric bills like £60-£70 a month maximum and i have 1 reef tank and qt and 3 freshwater tanks ^_^
No corals yet but will raise temp slightky when add corals
Last edited: May 25, 2021
S

nukemdanno said:
My current tank does not need chiller. However when I lived in CA that tank had a chiller plus a fan that I placed over the sump for evaporative cooling
Click to expand...

How did you do during the windstorm in January? My power was out for almost 5 days and I lost everything but some microfauna.

No chiller here and I always used fans when I lived in warmer climates.

I live in a tropical climate. Trinidad and Tobago in the Caribbean. Yearly average temp are High 92F and Low 75F(at night) My tank is a 4*4*2 cube F- approx. - 230 gallons

My tank normally resided around the 84 F mark during the day and 82F at night.
The corals are growing at an exponential speed and I have no issues with algae or bacterial bloom.. My fish are all great.
Recently I use a fan the blow across the top of the aquarium. This has now allowed me to maintain a temp of 82F during the day and 80 at night and the corals and fish remain happy.

I must state that higher temps = low dissolved O2 in marine environments.
Therefore, to compensate for this I have done the following
1. huge Chaeto refugium - 24 L*22 W*12H
2. Large Bubble Magus skimmer rated for 380 gallons
3. Powerheads and return the break the water surface to allow for O2 exchange.

I live in Pennsylvania where more times than not we do not have seasons. Lately, it only seems to be Summer and Winter with summers constantly hitting all-time records. I do not have central air and only 1 window unit which is not even in the room where the 125 mixed reef is. I use a fan and if too hot I have 2-liter bottles in the freezer to pop in in case of an emergency. I keep the 125 mixed reefs at 77 degrees and if it hits 80 the APEX starts shutting down the t5's and at 81 it shuts down the radions.

Up until about a month ago, I didn't run a chiller for about 4 years. When I added an 80w 24/7 UV to my 200g system it broke the homeostasis with the room temperature and started to reach into the 80 degrees. I also recently read a few articles theorizing that 77 degrees is an "optimal" temperature. So I pulled my chiller out of the garage and have been running my tank at 77.2-77.8 degrees. My chiller is pretty undersized and runs for 1+ hour cycles or else I would probably go for 76 degrees at night time.

onetootreefor said:
Do people who need chillers not have A/C? I couldn’t imagine my house being 80°+ in order to have the need for a chiller….

this is a serious question, do you only need a chiller if your tank is not in an ac area?
Click to expand...

For example, my tank sits on a second floor landing that five bedrooms come off of. There are no central AC drops on the landing. On top of that the insulation needs redone badly. My upstairs can easily get 80+

SuncrestReef said:
I just use a portable fan controlled by my Apex. It always amazes me how quickly a basic fan can lower the tank temperature, assuming the house temperature is below 78F: 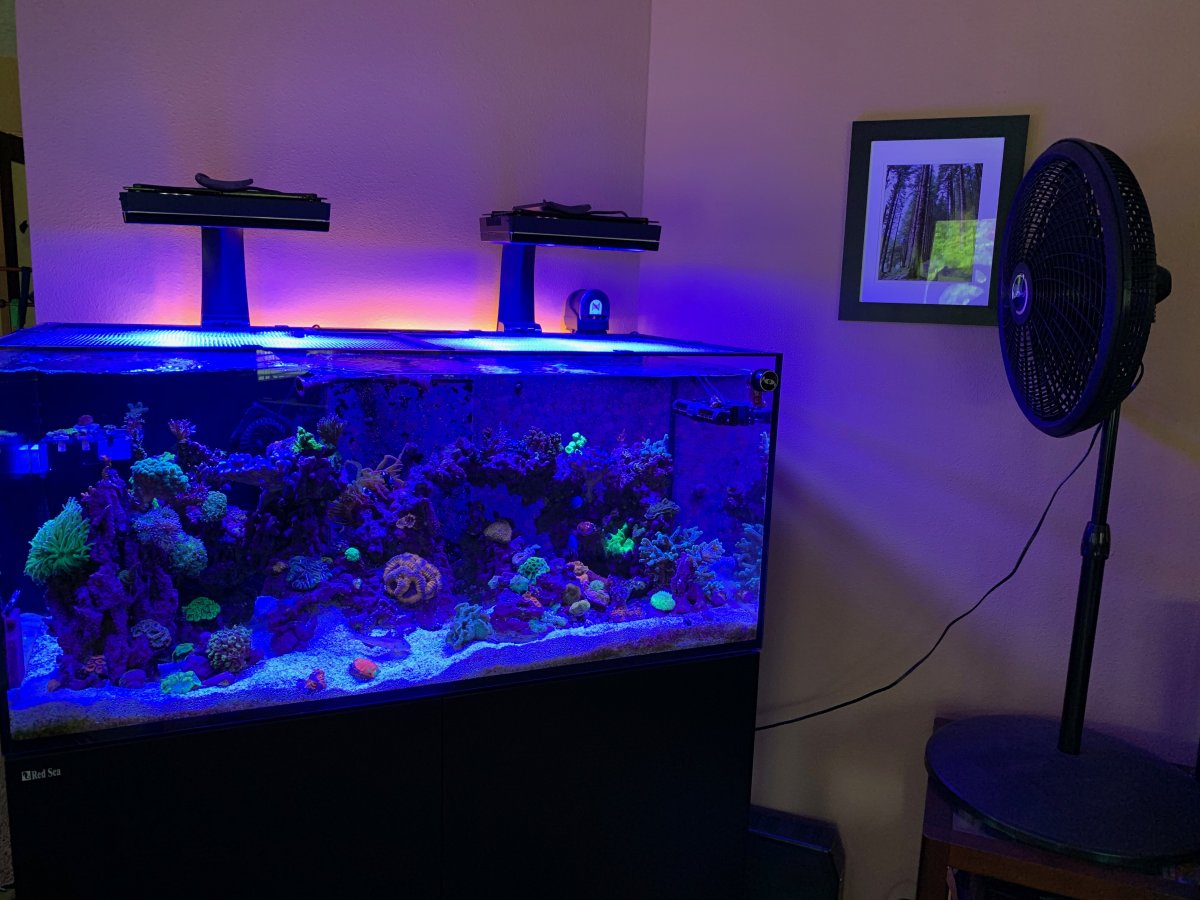 If that is a rotating fan, you can place a GoPro on it. It'll be the Coolest reef-channel evva!!

QUESTION OF THE DAY Chillers, Fans and Air Conditioning: How will you keep the tank cool this summer?
2 3 4 5

QUESTION OF THE DAY Keep THESE TWO THINGS out of your tank for a better reef? True or False?
2 3 4 5 6

Temperature fluctuations and settings for a reef aquarium

C
Flexible Emergency Use for Chiller?