NEW to reefing, what was the BEST thing you learned quickly?

This week will be a little different and maybe a little more fin (fun) as we discuss "when you're new to reefing" type topics! I remember when I was new and how reefing had opened up a whole new world to me. Along with that came so much I didn't know about and so much more opportunity to immerse myself into reef aquarium education. Today I would love to hear what the best thing you learned about while still new to the hobby! Let's GO!

When you were NEW to reefing, what was the BEST thing you learned quickly? 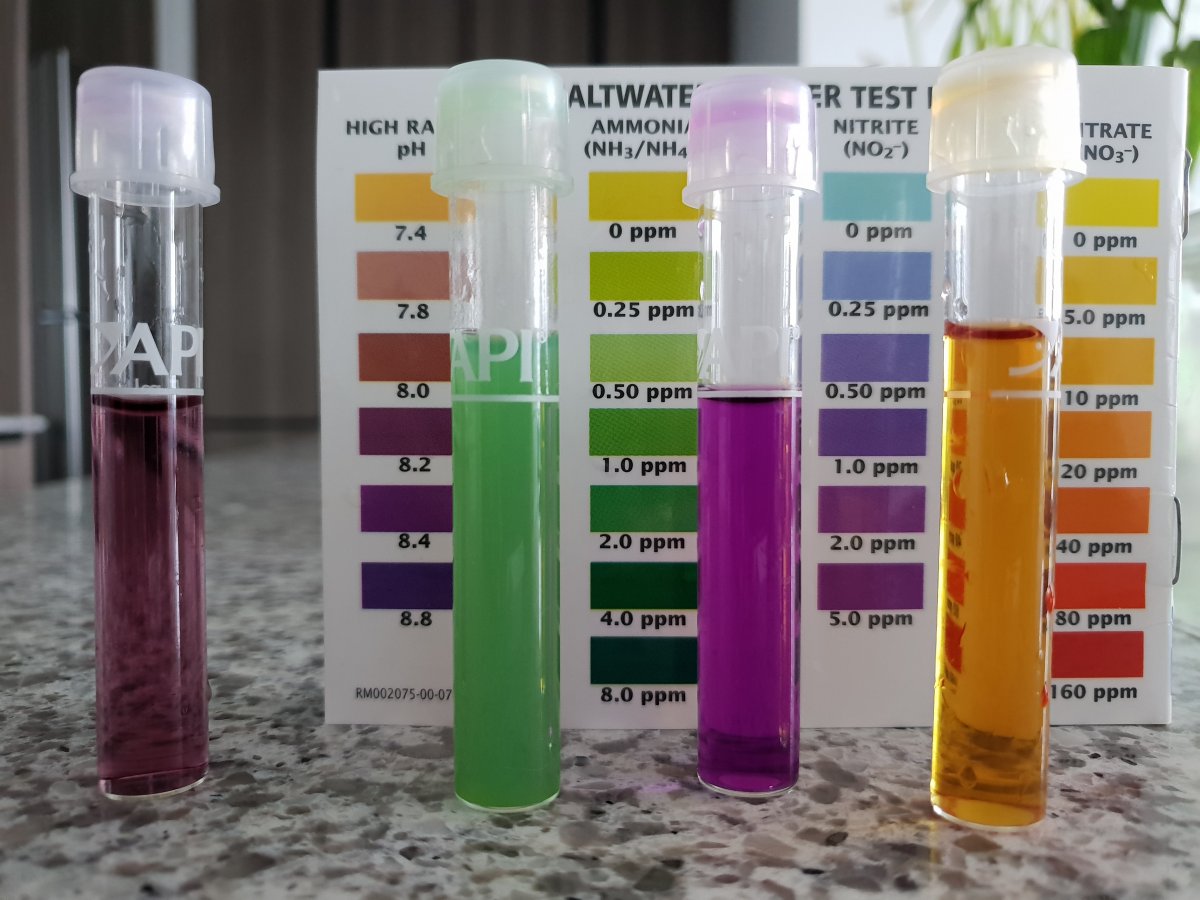 Coincidentally to your picture, that API tests are a disaster waiting to happen. Get a meaningful test kit.

Learned that the hard way many times

That salinity stability and precision is a pretty important thing, often considered a basic stuff when we start.

Learnt from research that alot of bad coral pests that get in our tank so decided dry rock Instead of Liverock bit also qt corals and remove all pests before dt.
Well learnt if dont observe corals In seperate tank first,I know got or had lots of coral pests even though dip so should of just went the live rock route Instead dry rock ha ha

The microbiome is extremely important! Make it as diverse as possible!

I think reading about the relationship between alkalinity, calcium and magnesium, as well as the sometimes counterintuitive ways in which they interact, was a big eye opener for me. For the first few weeks I was dosing just soda ash instead of that AND calcium because I perceived my calcium to be too high. That's fine temporarily but long term it would have led to an imbalance. I think RHF's articles on reef chemistry should be required reading by the hobbyist.

Opinions are like ******s. Everyone has one. (I knew this long ago before reefing) Do your research and work out what works for you. Trial and error. Don’t not do something because someone talks trash about it. Or on the flip side says it’s the silver bullet.

Patience and research. Impulse buys for the new aquarium almost always ended badly for me.

Aipatasia isn’t a cool anemone to have as a freebie

Research everything before you buy it/try it, and make notes (I have 100's of pages which I update as I gain experience.)

Been in it almost 2 years.

Patience and research everything. Narrow down the list of suppliers / people you are buying from. Their issues will show up in your tank in no time.

Started this journey in 2005. First and worst lesson learned. Top off water is supposed to be fresh water not saltwater.

So I have been in and out of the hobby for about 20 years, starting with a 55 gallon tank with an ungergravel filter. Those were horrible times but I learned a ton the hard way.

I stepped away for a while then had a 45 gallon breeder with a sump, I would call this the first successful tank that I kept coral in. That tank was broken down because we were moving.

Later I had a 150 that was ok it was successful but I was never truly happy with that tank.

then I had a 225 acrylic tank that was a nightmare. It was successful but I barreled cyano for a year, which later I suspect was from it being an aquaculture tank previously. That tank was broken down for two reasons first we where remodeling the kitchen (tank was on a wall we were tearing out) and second we lost our A/C unit and it took a month to get the new one in so due to uncontrollable heat in the house the tank crashed.

Currently, we have a 225 glass planet tank, it has been setup and running for just over a month. I find that I am very patient when it comes to this tank for some reason I will call it age and experience.

my point here is each time I have exited and renters the hobby there have been advances made that have been huge for the industry. Causing me to learn new things I thought I knew all over again. I think if one approached this hobby with an open mind and willingness to constantly learn then they will have success.

PS. Having a good back up plan is always a good idea, the new tank has two return pumps and will eventually get a chiller even though I may never need it.

I will also be putting an apex on the system in the very near future. I could do with out it and the tank has sufficient monitoring, but after bing watching multiple videos I see that there are automation things that I would like to have in place. not to mention the ability to remotely monitor the tank.

Crazy for the weird things

Check out every LFS in your vicinity otherwise you might end up overpaying or settling for one that sells unhealthy livestock.

If anyone can explain to me why one LFS in my vicinity quarantines everything they sell but can still manage to sell fish at many times a lower price than the other stores around I'd love to know!

Slocke said:
Check out every LFS in your vicinity otherwise you might end up overpaying or settling for one that sells unhealthy livestock.

If anyone can explain to me why one LFS in my vicinity quarantines everything they sell but can still manage to sell fish at many times a lower price than the other stores around I'd love to know!
Click to expand...

While I dont have an explanation for you, that is a great policy. I have an order in with Dr. Reef, honestly, I dont mind paying the extra money to have them take the risk to QT the fish, I know I am not that patient and not going to QT fish if they are in my house. The cost was not crazy so if you have a LFS that is doing this as part of their business model that is awesome, especially if the prices are lower. Do you know if they have an online presence? what is the URL?

What are your tips for the best reef show experience?

QUESTION OF THE DAY What's your favorite thing about reef shows? Is it the corals, the cool equipment, the community...?
2

QUESTION OF THE DAY The EBB and FLOW of reefing enjoyment! What keeps you coming back for more?
2 3

QUESTION OF THE DAY Reef Aquariums that INSPIRE! What tank is your inspiration?
2 3 4

QUESTION OF THE DAY Reef Conversations: Do you talk to your friends and family about your reef?
2 3 4 5 6