I've been both looking forward to, and totally dreading, starting a journal here. I had one written up in an Australian forum that has since kind of died and rather than use the content from that one, I really wanted a new one so I could apply some hindsight knowledge and learnings to my multiple mediocre stages of reef keeping.

I'm going to briefly document the history of my reef keeping starting just before the build of my current in wall tank.

I started keeping cichlids about 20 years ago and had several tanks of various sizes. Was ok but always wanted salt.

In roughly 2005 I built a 4x2x2 (sorry Northerners, us Aussies usually quote tank dimensions rather than volume). All was ok and I was learning. I had a lot of softies and there wasn't huge knowledge available so just bought random things and hoped they'd be ok.

When we bought a house, I built a 6x2x2 with an external sump going into a bit of a semi-garage. There's pics of this coming up so I wont explain now. This is the tank just before we replaced it with the in-wall. 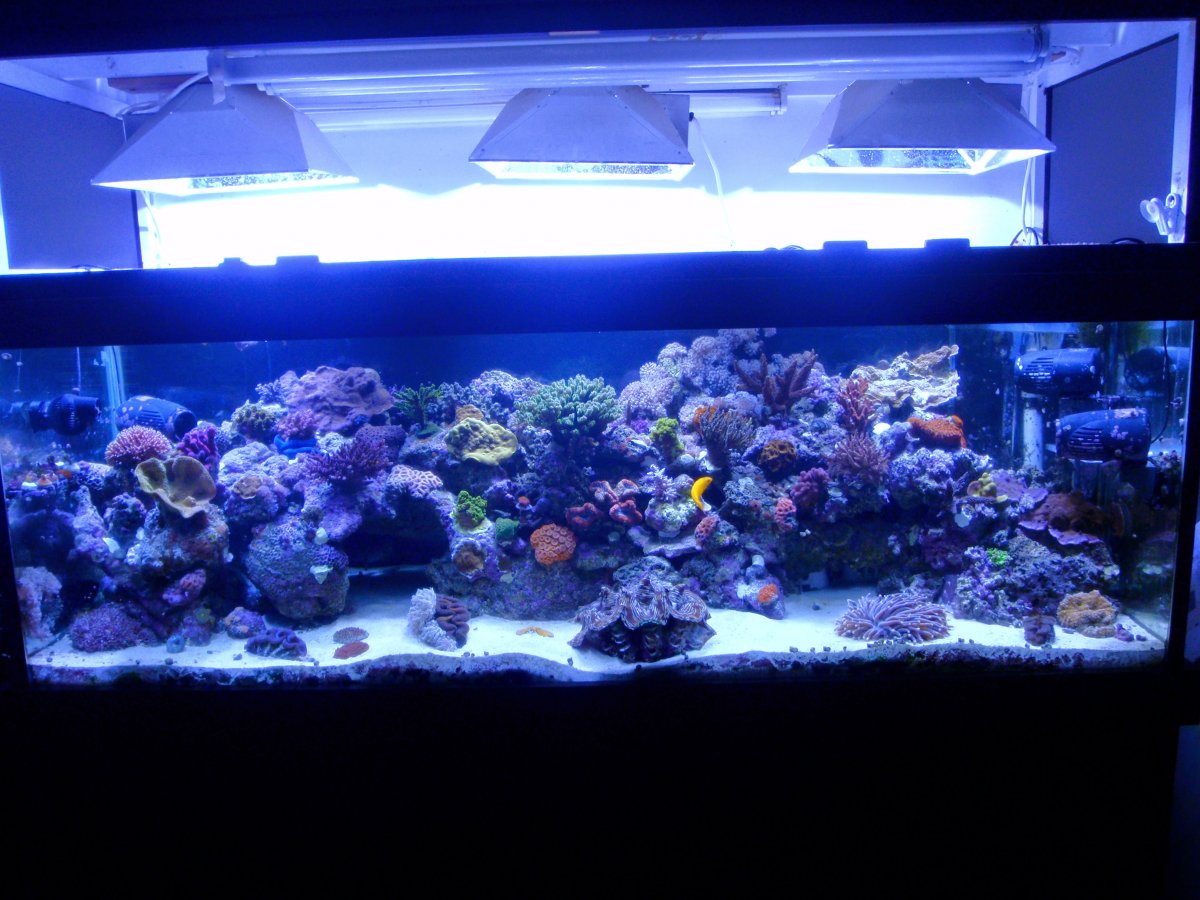 It had 3 x 400w halides and look at the size of the wave makers on the sides! Keep in mind that this tank reflected the opinions of many at the time, that is that more rocks are better and you need a DSB. Unfortunately, these opinions carried on into the new tank (at least initially).

Two little things to note in this pic; on the bottom left there is a single green/brown palythoa, also, on the other side (bottom right) there is a little green Euphyllia. The Euphyllia was a hitchhiker and didn't even appear for several months after the rock was added. I had this Euphyllia until about 3 months ago (almost 15 years in total) when it succumbed to brown slime (was a wall Euphyllia, not branching). 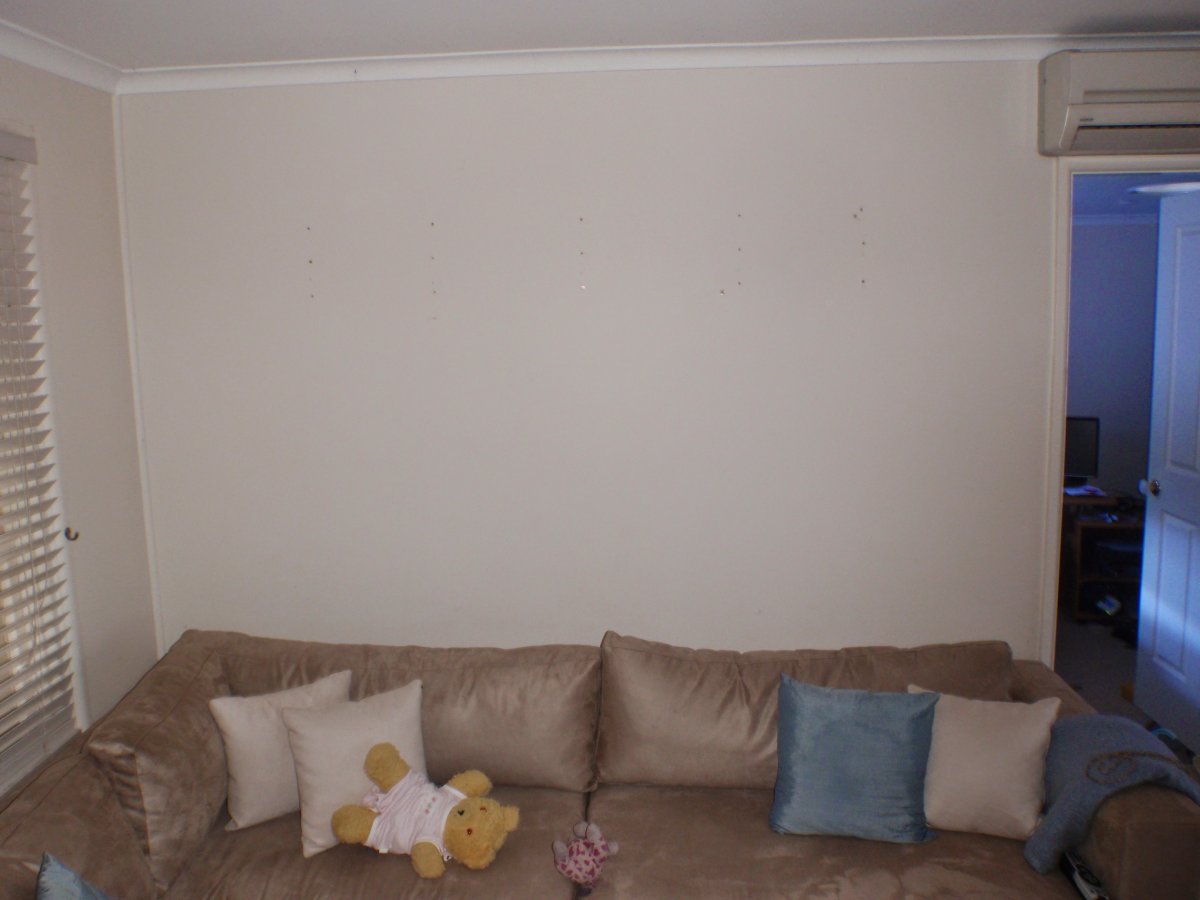 My friend Ryan who had an awesome 2 foot cube was also a builder. He did us a great rate on the work which is totally over engineered and to this day is stronger than the rest of the house. 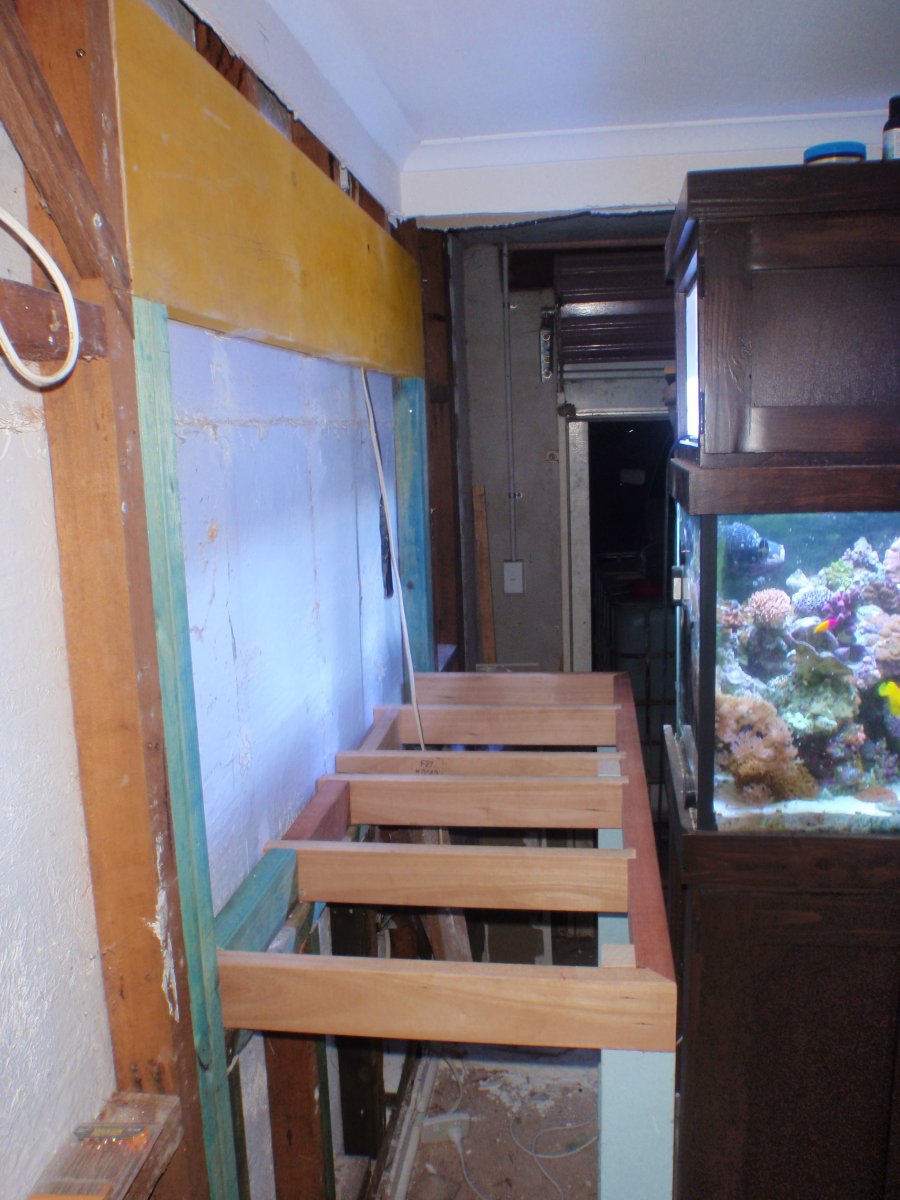 You can see the load bearer has had to be moved. It was engineered so all ok. You can also see the "garage" which is about 1m deep and sits behind that wall. Its the perfect size for a baby fish room although the fish room extends into this room we're in also. Given the size of the house I'm still endebted to my wife for being ok with this. 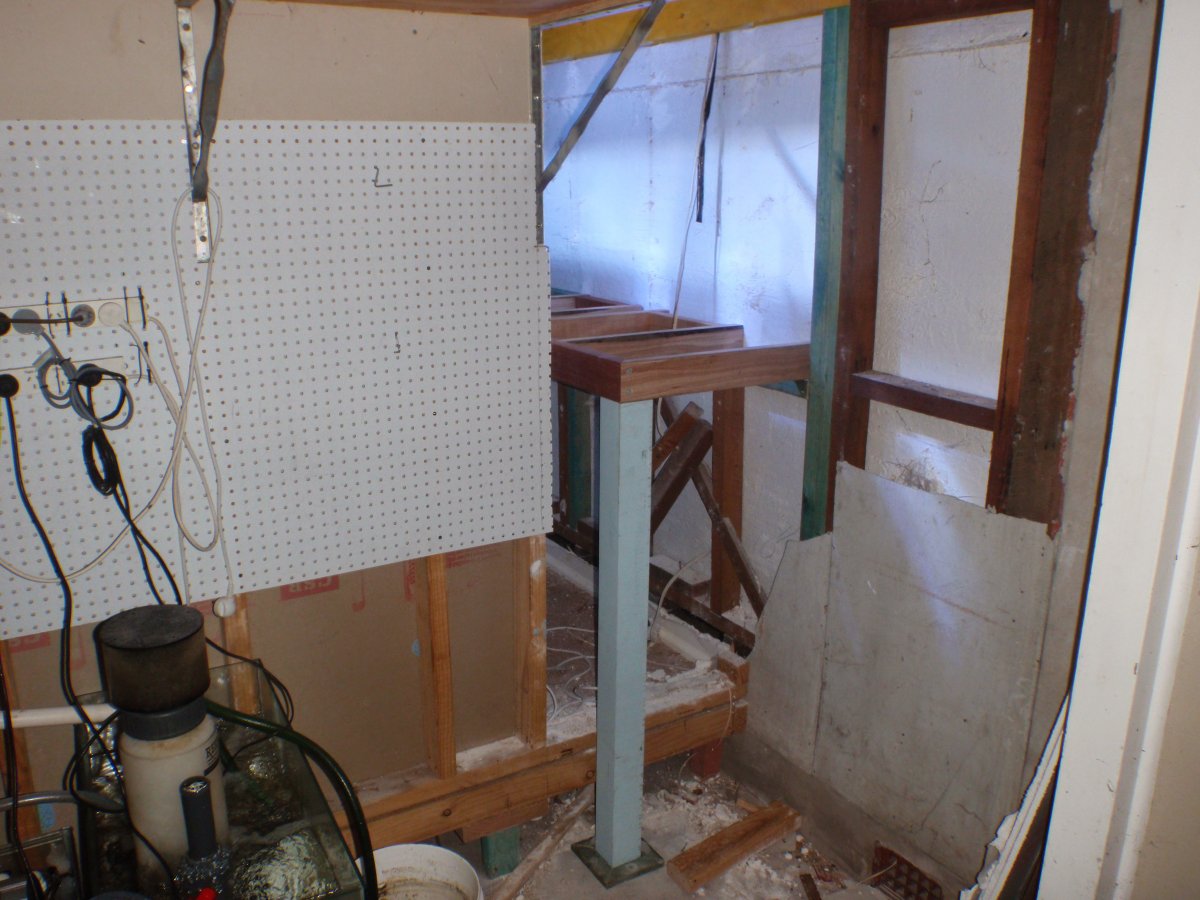 Note that the legs of the new tank stand go through the false floor in that room to connect with the garage's concrete floor. Its seriously insane how strong this all is. 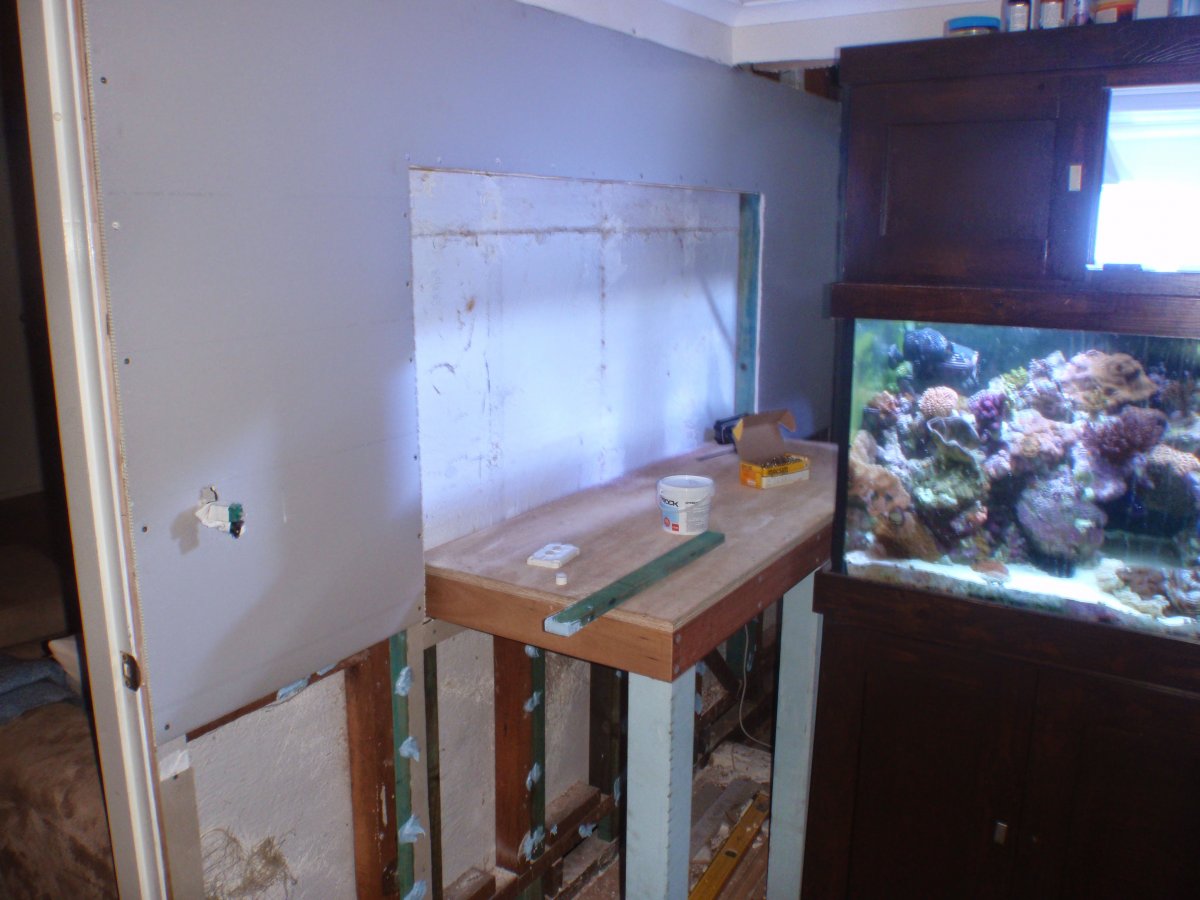 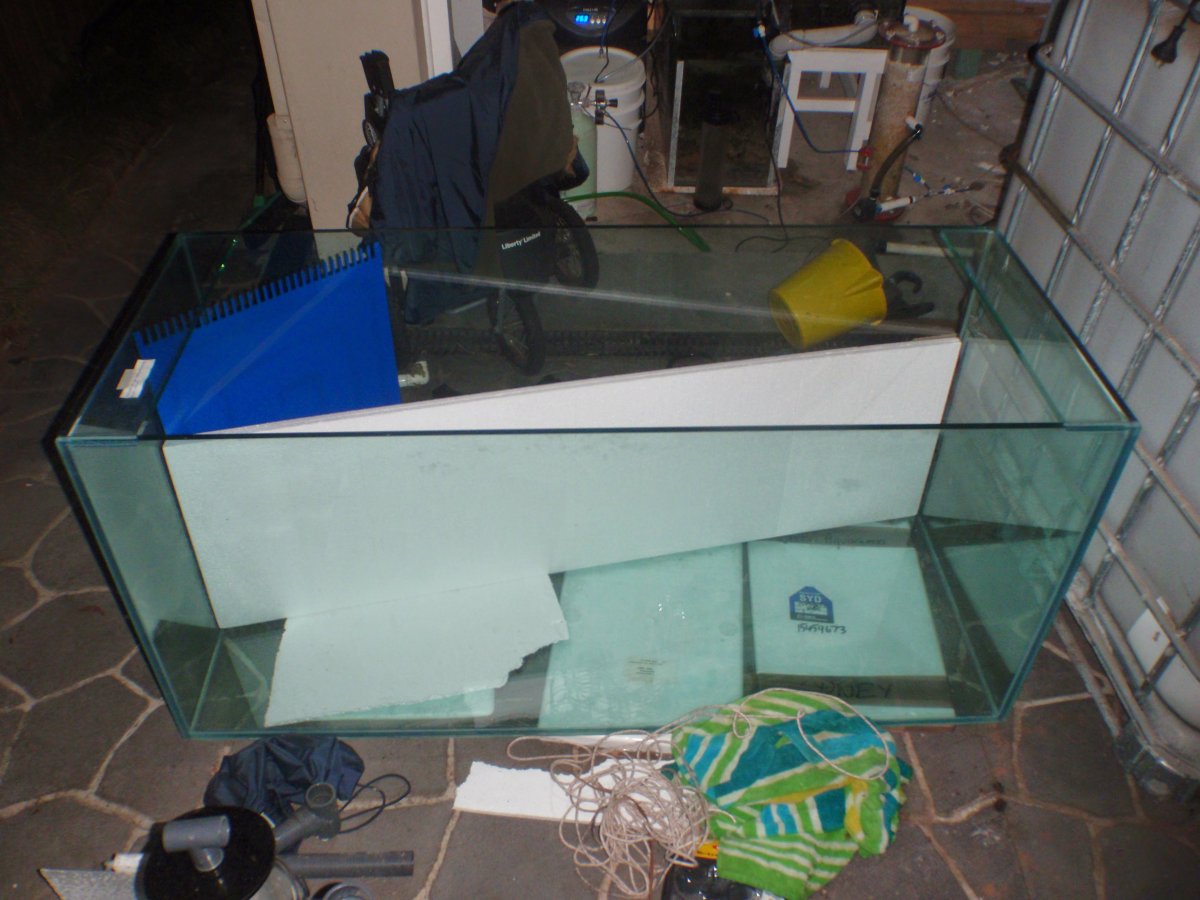 Beautiful new tank. Measures 5 x 2 x 28" tall. Trying to maximise the available space. They kinda messed this up as it was supposed to have front and rear bracing to stop water getting into the wall, i glued some on later. It also had a 20mm (~1.4") "return" hole which was absurd and not usable at all. I was pretty irritated. I run the return externally and have 2 returns (3 holes total, the others were abbout 40mm (~3"). 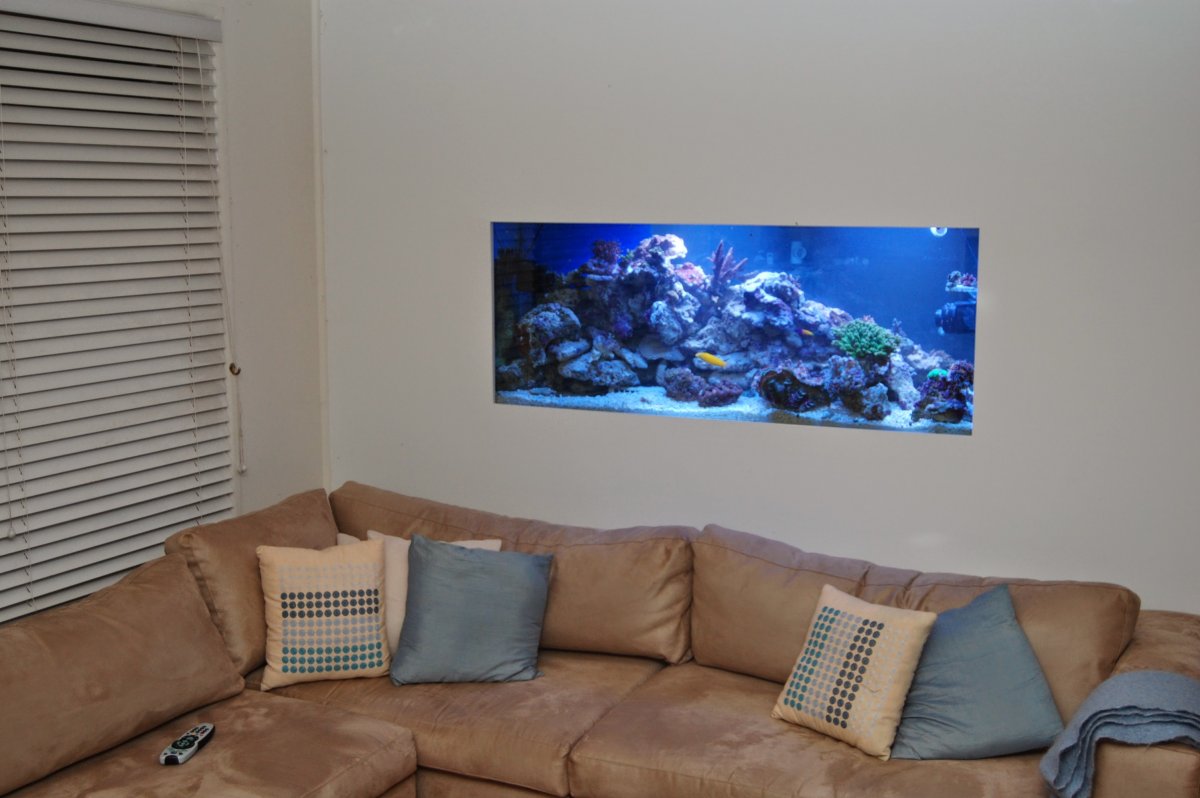 And here we are! All in. Note that the hole for the tank is 1" shorter on each side to not show silicone, 2" lower on the top so you can't see the water surface and about 6" taller on the bottom so you don't see the DSB. Ryans ideas and I'm thankful, it works perfectly. Also better explains the strange 28" height of the tank.

Wow. This is amazing!
OP 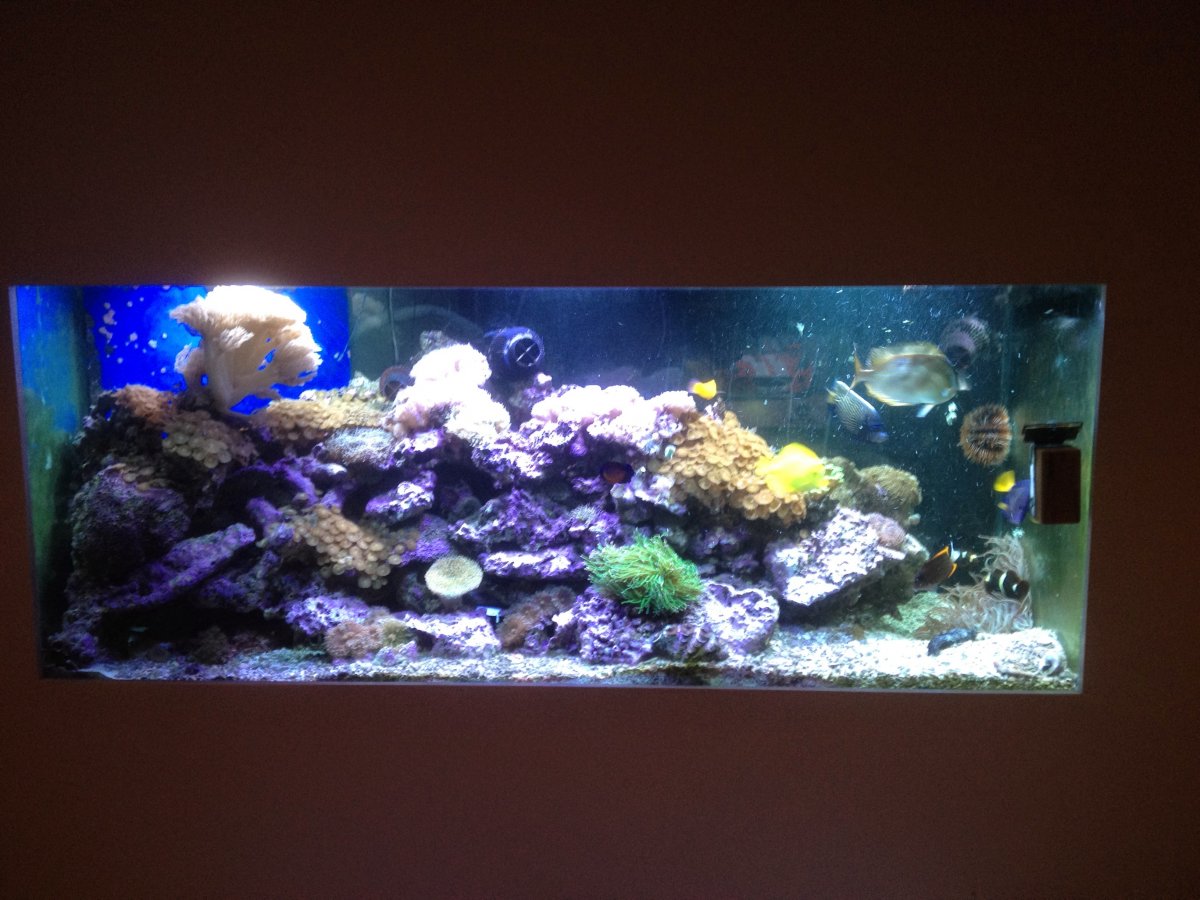 Sorry for the quality.

You can see I've gone for almost more rock than water The sand is also 6 - 7" deep all around.
One thing I did in all my tanks for a while was to put upside down plastic kitchen baskets down and put the rock on them. This allowed for critter movement and water flow to go between the rocks and the sand. You'll see better pics of this shortly.

Note the palythoa now. Its around this time that I got palythoa poisoning and spent a week in hospital. I rested my arm on them in the tank where I had an open cut. I still have the scars on my arm from it.

The hitchhiker Euphyllia is now bottom centre-right. Starting to get big.

Also, I still have that purple tang and those clowns! Most of the others will die soon because of a crash.
OP

Much better pic from 2012. I have trimmed my weeds in this one (pulsing xenia). 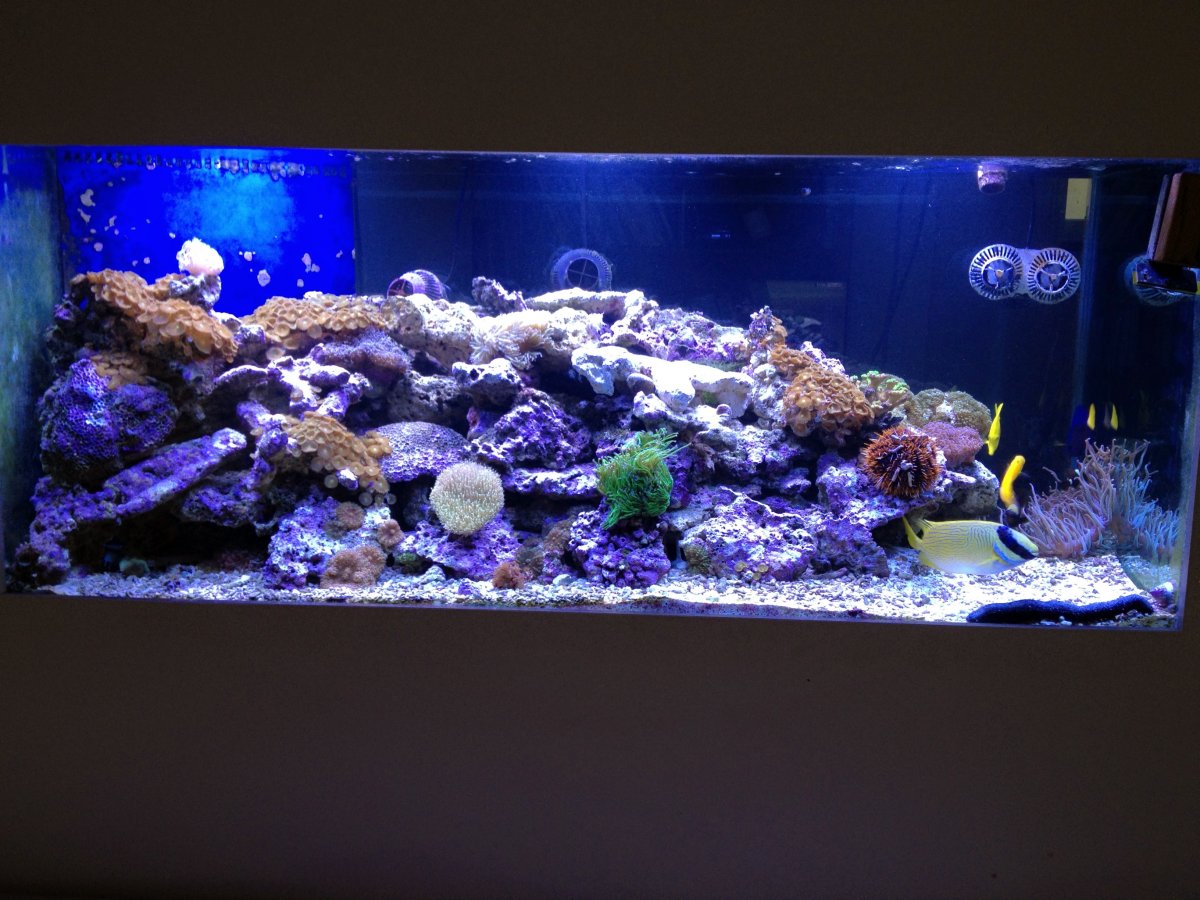 I bought this guy, who I loved and within seconds of him entering the tank, he disappeared. And I mean, gone! I was convinced he was dead.

He wouldn't be seen again until over a year later and after the crash!! After that he cruised around the tank like thats what he'd always done. He lasted for several years after that but I dont recall what happened to him after that. 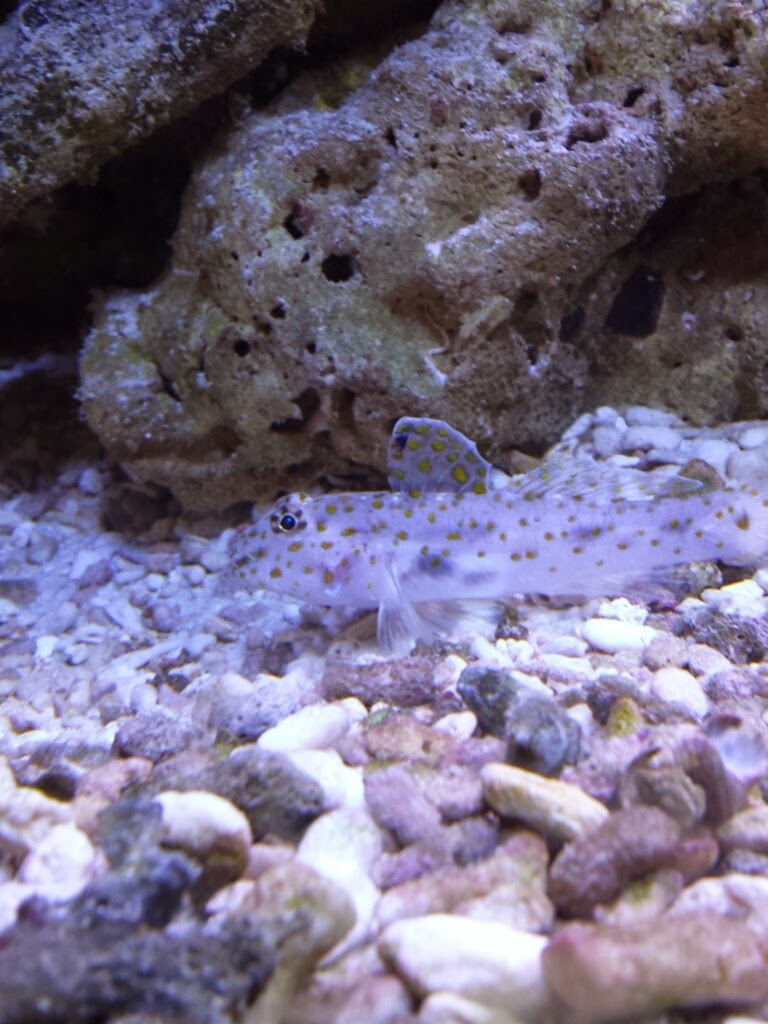 I don't remember the crash all that well, but I'm pretty sure it was a kalk overdose. It killed so many fish including an adult emperer angel, a yellow tang, a scribbled rabbit. Lots.
OP

I just found this from 2014. I'm gobsmacked! While I definitely neglected it for a few years I just can't believe it ever got this bad. 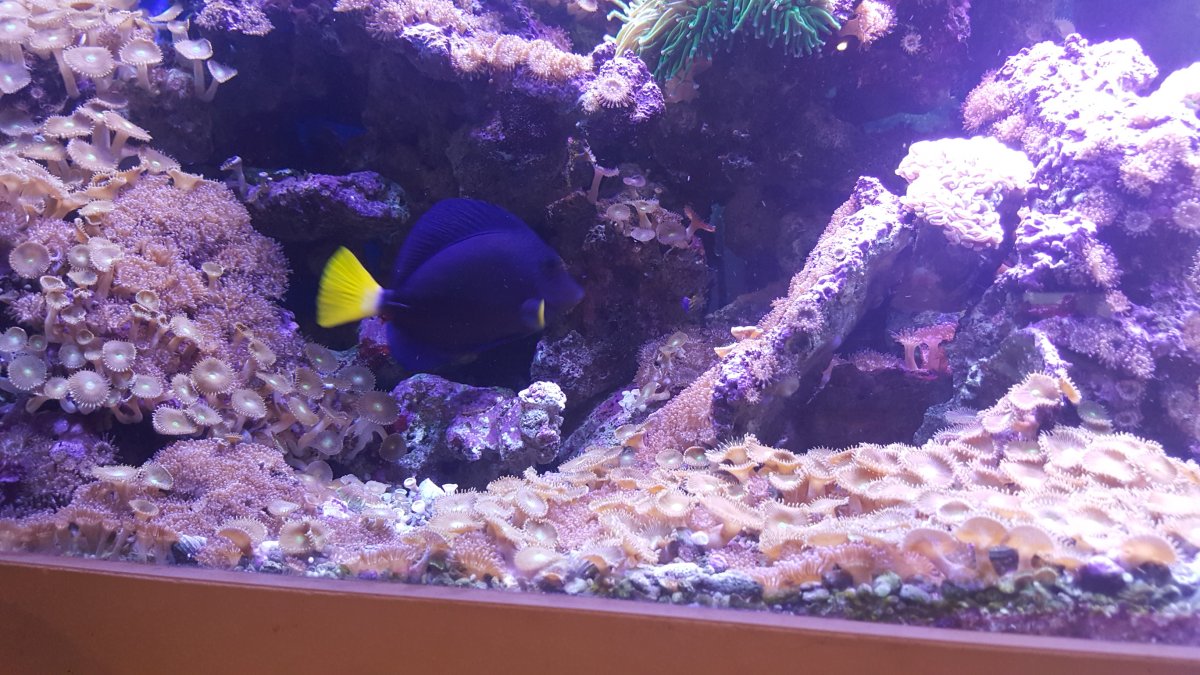 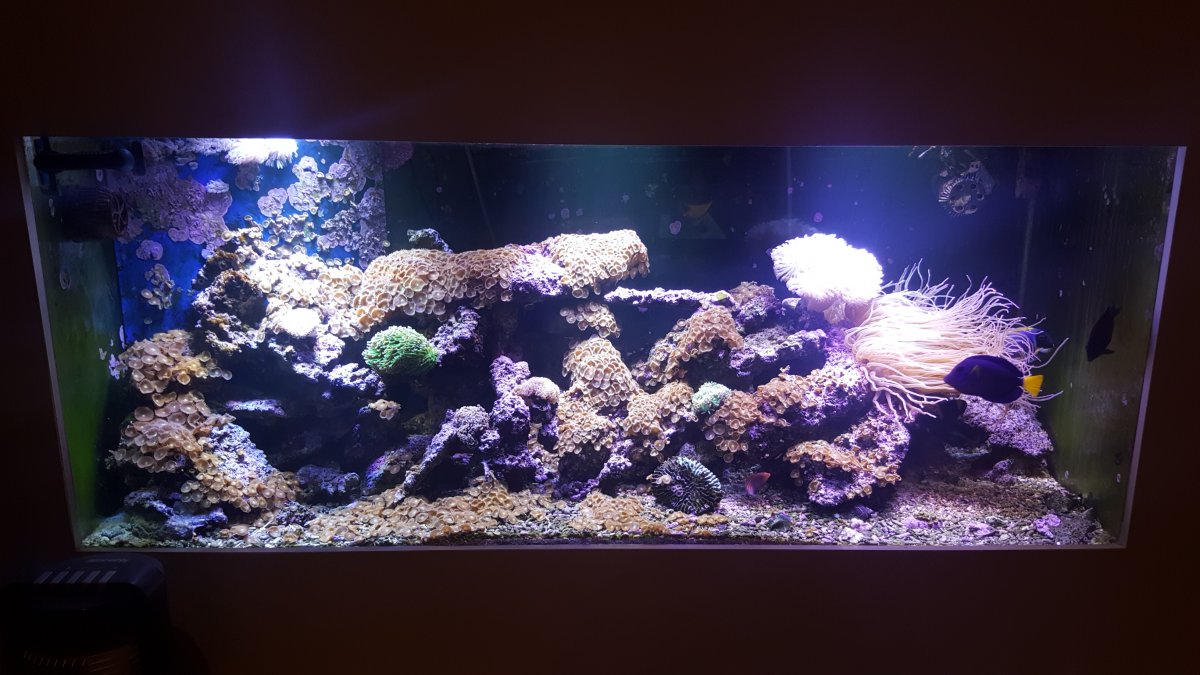 Here's a super old pic that shows what I mean about the kitchen baskets. 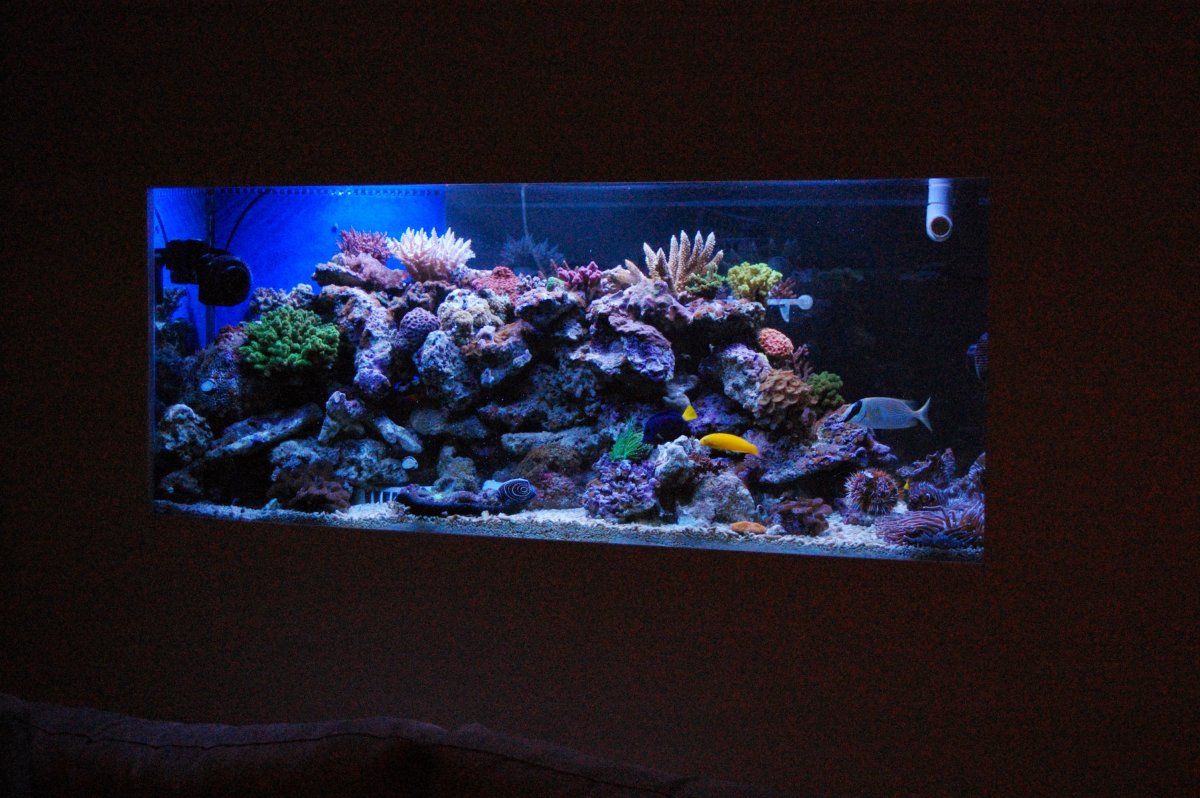 Really cool, thanks for sharing!