Tank Covering: What, How, When and Why?

I made a cover from 2 things. on my 120 it is framed so I used these on the front half and then acrylic sheet on the back

The hinges make it easy to drop in food and do simple things.

I tested with my seneye for par loss and it was only a few % when cleaned. So much better than expected. It keeps the noise down from my flow.

1. Is your tank covered? If not please tell us your reasoning.

2. How do you have your tank covered and are you happy with the solution you're using?

I have a custom acrylic cover with screen in the center of it for my Waterbox 70.2. I love it as it is barely notable.

3. What do you dislike about having to keep your tank covered?

The only thing I don’t like, and it is minor, is when I am doing maintenance on the tank. It’s my laziness really. I will try to work on the tank not removing the lid then will get annoyed when it’s in my way. Lol. It’s a small gripe I know. When are they going to make a lid the will keep the fish in AND not hinder my from getting in the tank without removing it? 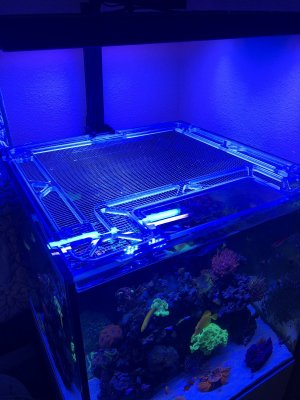 1. Is your tank covered? If not please tell us your reasoning.
Yes 24/7 to keep the fish from jumping to their death!

2. How do you have your tank covered and are you happy with the solution you're using?
DIY from BRS with clear screen

3. What do you dislike about having to keep your tank covered?
I dislike having to remove the screen because I don't have instant access to the tank. But, it's ok, it's one piece so not that bad to deal with.
3

I never covered my tank and lost fishes because of jumpers. Now I keep it covered when I'm not at home or I'm in another room or sleeping. It's a net screen cover also so it's not closed.

I had a screen made but currently only using it at night.

Have a custom Clearview Lid and keep it covered 24/7 unless I am performing maintenance or adding new livestock.
D

revhtree said:
Today let's talk about covering our aquariums to keep our fishy friends from becoming fish jerky on the floor!

If you've ever lost fish to jumping then you know how disheartening and frustrating it can be. Sometimes even with a covered tank you'll have a fishy escape artist to find a way out and down on to the floor! So....let's discuss it!

1. Is your tank covered? If not please tell us your reasoning.

2. How do you have your tank covered and are you happy with the solution you're using?

3. What do you dislike about having to keep your tank covered? 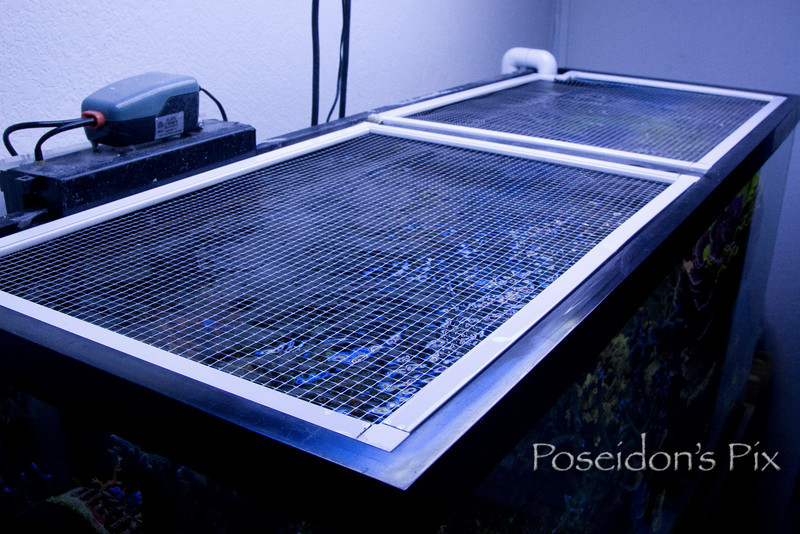 Spdjnky said:
I hate screen tops so here is my solution to the fish jumping if they can jump over I lose 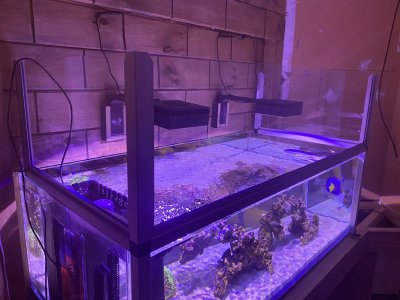 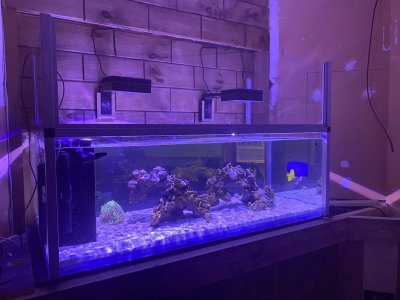 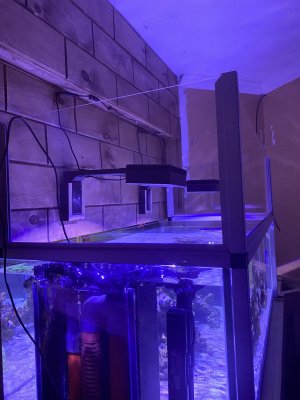 I have it covered 24/7 BUT always have wondered why every LFS I go to has open tanks. How do they train their fish NOT to jumb?
S

I have glass lids with the first 1/3 of each that can be opened/flipped-up. I voted "Covered most of the time" because I open them when feeding and remove them when cleaning once or twice a month.

Bought screen from BRS and frame from hardware store after two different Flame Hawk fish ended up on the floor over a few years.

A reefer in need is a friend indeed!

1. Is your tank covered? If not please tell us your reasoning.
Not yet but it will be, we're adding a laborides Hawaiian cleaner wrasse and they are notorious for jumping.

3. What do you dislike about having to keep your tank covered?
The cover takes away from the clean look of the rimless tank. I'm not sure if it's me not used to seeing it on or if it'll get less noticeable over time.

I've been keeping marine aquariums for over 30 years now. I've used pretty much everything you can imagine as a cover at one point or another over the years.

1. Glass Tops. My first 55g setup came with them so thats how I set it up. It was a great place to sit my DIY T12VHO lights, and the plastic section in the back was easy to cut for power cords and a HOB filter. It worked fine but was a pia to keep clean.

2. Acrylic. My 60 cube came with glass tops as well and they worked until I dropped them. Then? Not so much! I replaced it with 1/4" acrylic that I braced on the underside with acrylic "joists" to help prevent warping. It still did a little, but it was good enough. Again, easily modified and a great place to sit my DIY lighting on.

3. Eggcrate. At the same time I had the 60, I had both a 120 and a 150 long. Neither came with tops and I was tired of messing with glass/acrylic so eggcrate it was. The 120 was a mixed reef so I inadvertently help increase oxyenation. I'm sure the corals were happier for it. The 150 was home to a 4' Moray who liked to escape. The eggcrate was held in place with the DIY lights and chunks of dry rock in all corners. WIthout that he was on the floor.

The downsides to eggcrate, IMHO, are that it is actually a lighting diffuser, not something we necessarily want for our reef tanks, and at least IME, gets brittle with age.

4. DIY screen tops. That leads me to my current systems, a 120DT and a 60g FT. Both have DIY screen tops made using HomeDepot window screen frames and 1/4" mesh from BRS. To allow for cordage, I made the DT tops in two sections. The back section is just wide enough to use the corner brackets, and small slits in the mesh allow for passage of cords, then sort of self-heal around them. The front, larger pieces are easily removable for maintenance. Both can be taken to the utility sink and sprayed clean using nothing more than hot water.

I lost two clownfish in the past year due to not covering the tank. So I voted 24/7. Think I’ve finally learned my lesson. 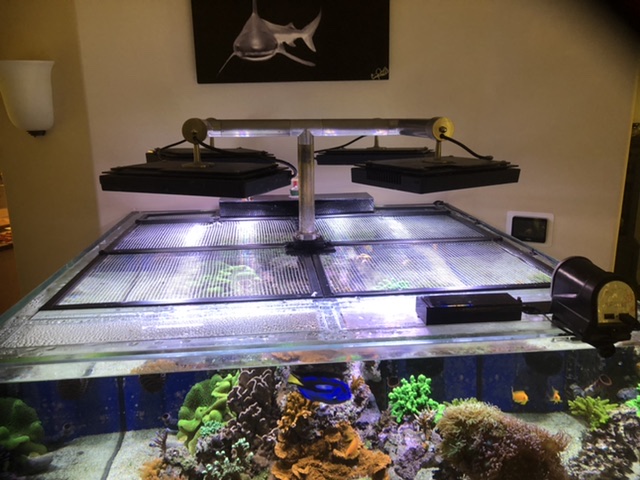 Location
the great state of Texas

I would love a cover, I just haven’t found one for an 8’ tank that doesn’t sag or look like crap
S

Wow what a throwback pic!


White PVC elbow for single over the tank return? Check!


I put a screen on my rig when I added wrasses but got paranoid when I saw salt creep forming on the metal frame and took it off.
E

I had a clear cast acrylic cover.
My ph dropped? Not sure if that was the reason or not???
I have lost a few fish over the years.
Hurts a lot when it’s one you had a long time.
Think I will put the topper back on.
As it appears not to be the cause of my ph drop? The evaporation is a lot less with the topper. Plenty of air exchange in the sump.
I too have to dim my leds.....so the light loss is not an issue.
Still working on the ph???
Eddie

I keep my tank covered 24/7 with glass tops, because I have a particularly finicky tilefish that likes to flop around! His friend managed to jump onto the corner of one and wedge it loose… found the fish dried looking like a fish stick in the morning! The other tilefish is not as rambunctious but I won’t be tempting it anytime soon.