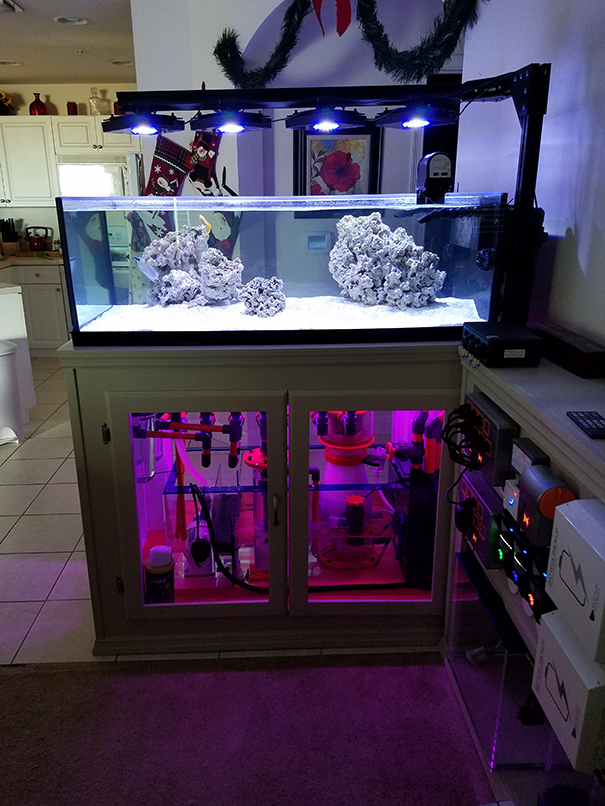 I will try to keep this updated but I am rather lazy about taking and editing photos, so we will see.

I broke down and sold my previous tank because I was a little disenchanted with the size and the way filtration was handled. I still consider it an excellent tank, but perhaps not what I had wanted as an enthusiast. I knew from experience that I was tired of deep(er) tanks so I wanted to get something that would be less annoying from a maintenance perspective. It's just my own personal opinion, but I really think the upper portion of tanks that contain just water are a waste of space. Knowing that, I was fine with anything in the 16-20" height range, but preferably 16 or 18". I originally thought I'd be stuck going custom or trying my hand at DIY, but a few threads on here pointed me in the direction of the Deep Blue shallow frag tank. I'd had a Deep Blue cube in the past so I was comfortable purchasing from them again.

I knew that for this build (and probably all future builds) that I would want to go the peninsula route. Because of this, I wanted to avoid getting a 'Reef Ready' tank at all costs. After finding the right product number for the tank with no overflow and non-tempered sides, I placed my order and received my tank the next day. I purchased the 16" Synergy Reef overflow and drilled it a couple of weeks later when I finally had some free time.

Unfortunately I did not want a 30" or 36" stand for a tank that was so short. Considering that this aquarium was going to be a peninsula, I knew from the start that a standard stand would be out of the question. The lack of height and the lack of a finished back would be a deal breaker for me. With this in mind, I sent out for a couple quotes to ballpark what I wanted. Asking for a simple stand at 40" and doors on both sides came back well over $1200, and that didn't even include doors on the back. I scoffed at the cost and pledged to just build it myself, something the wife was extremely apprehensive about.

I used a combination of ideas for building my stand, I've always liked Joey's template for DIY stands so I used that to create the skeleton of the stand. Shout out to @kevantheman35 who provided an excellent step by step thread for how to create a stand. I used his guide almost word for word and I was extremely pleased with the result. 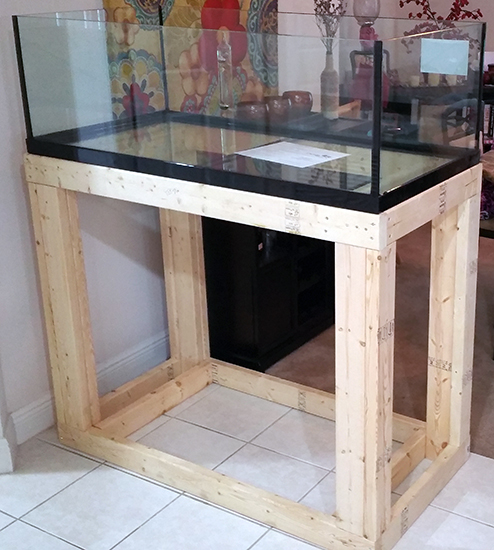 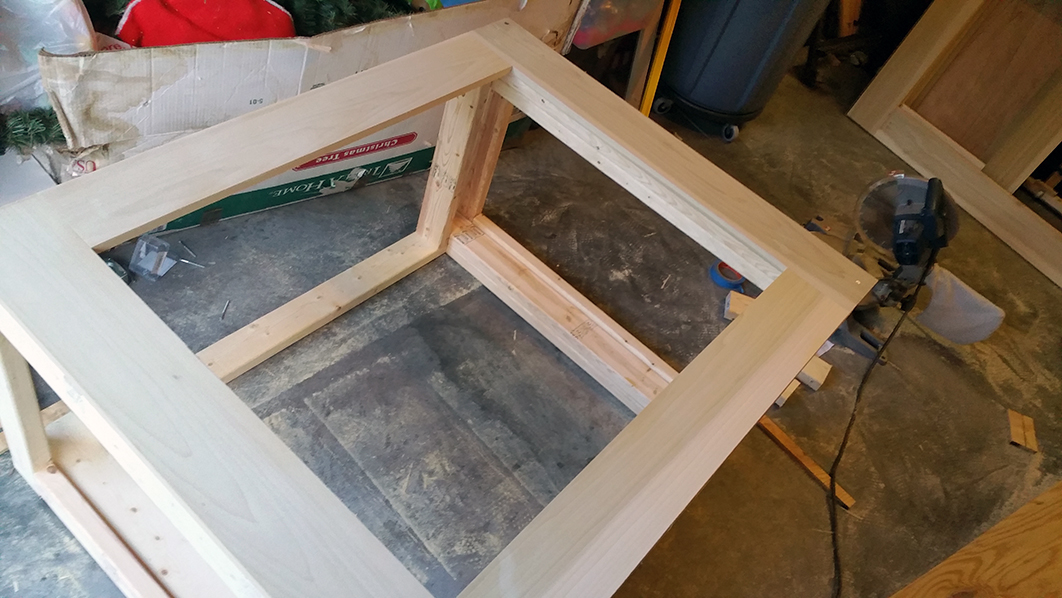 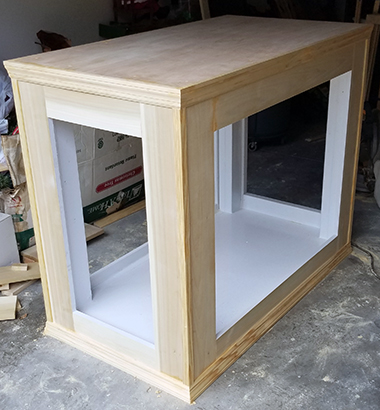 After completing the frame I pieced together the outside and painted the inside of the stand with appliance epoxy. It actually turned out a lot better than I expected, so that was a pleasant surprise. Not pictured was my absolutely hideous attempt at staining, followed by re-sanding everything and painting.

After completing the stand I knew it was time to begin plumbing, so I called by brother-in-law and asked him to come over and be the ceremonial hype man and hose holder. I knew I wanted to do two returns, one on each side of the overflow, but I was concerned about the distance from the returns to the sides. In the end I basically aimed for a 1.5x distance on each side and it has worked great so far. 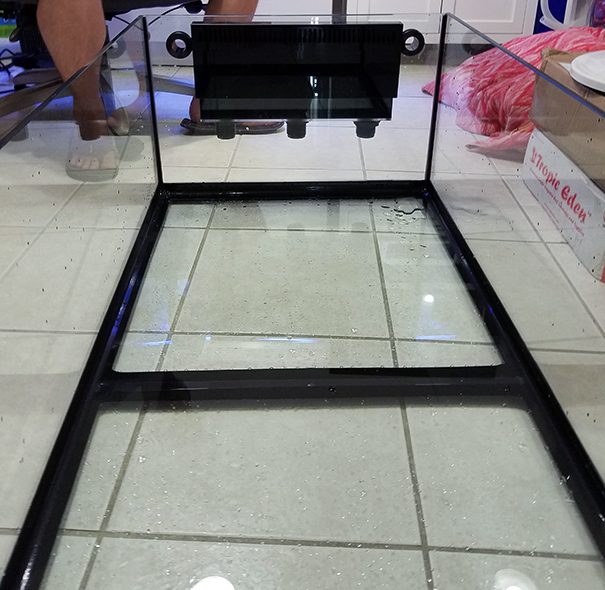 I guess now is as good as any to talk about what kind of equipment is going into this build. I've tried to include a list below, I don't think I will touch on any thing specifically but feel free to ask questions and I will try to provide more information or my experience up until the present date with said equipment. 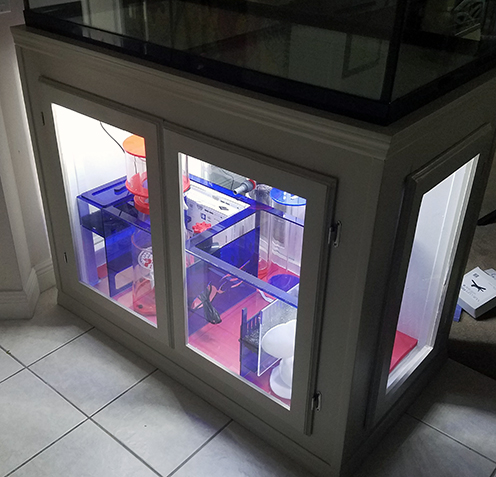 I've never hard plumbed any aquarium, but since I knew I was going to be using glass for my doors I decided it would be worth it to make it look nice. I ordered more of everything than I needed in case of mistakes or underestimating my needs. In the end I only had a handful of extras so I kept them for future additions or changes.

Plumbing was significantly easier that I thought it would be... at the start. I knew I wanted to make a manifold with plenty of options for expansion in the future. With this in mind, I made it so that I could have six other pieces of equipment running off of the pump. I purchased the L1 instead of an M1 to have more power for the additional filtration, but if I ever end up needing all six I will buy an M1 for the tank returns and let the L1 run the manifold solo.

The hardest (read: most annoying) part of plumbing this aquarium was dropping the bean animal down into the sump because of the angle and the provided plate that comes with the Trigger sump. It wasn't too bad, but my wife gave my swearing a few raised eyebrows.

My helper lost faith in me and the mission and decided to take a nap.

After I completed the plumbing it was time to do a leak test. Unfortunately, I knew I couldn't fill the aquarium with water until I had my lighting issue figured out. I'm not in a position to mount from the ceiling, and I thought that the standard Ecotech mounting arms would look ridiculous on a peninsula style aquarium. Originally I planned to use conduit and simply run my lights over the tank that way, but I had little faith in the conduit being able to resist the deflection over 48 inches, and had even less faith in trusting $1600 in lights to a 10$ piece of steel. I eventually decided on using 8020 and using their deflection calculator I was able to choose the size I needed to have no (hundredths of an inch) deflection over the four feet. The mounting of the lights was its own DIY nightmare with me basically creating a Frankenstein of Ecotech's mounting brackets and their extension bar with my aluminum arm. In the end I was extremely pleased with the result. 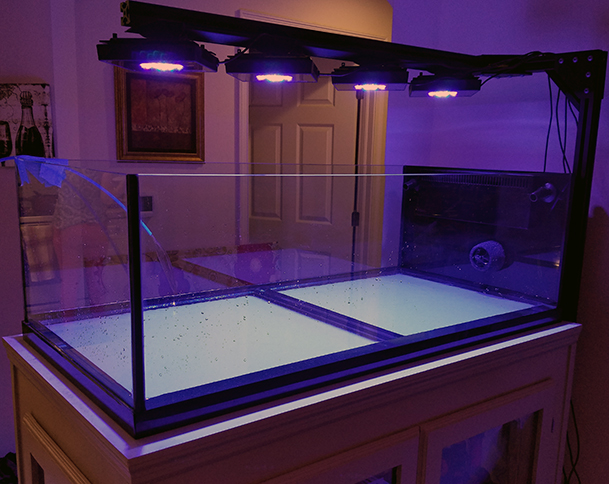 After I was plumbed and leak tested I was pleasantly surprised to have only one leak, which turned out to be a joint I forgot to glue. Everyone I knew had tried to talk me out of hard plumbing but I'm glad I did it in the end.

While all of this was going on I had decided to use pukani like my previous build. I really love the look of Pukani and its porosity, but I absolutely loathe the preparation it requires. Every time someone talks about how easy it is to use pukani, or about how they did no prep work for curing it I am absolutely lost on how that is possible! This photo represents the end of I believe 10 weeks of annoying water changes. 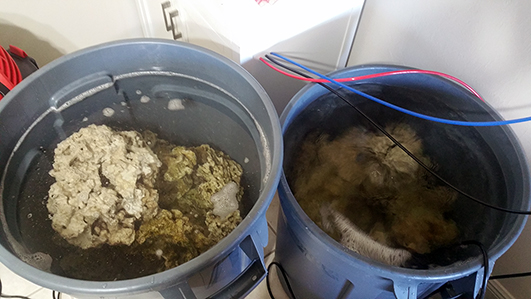 I wrestled with the decision to do sand or bare bottom for weeks, but my wife is really a big fan of sand so I decided to give Tropic Eden and their reef flakes a try. I really love this substrate compared to the Fiji Pink I've used in the past. Here is a photo about an hour after adding the sand to the tank. 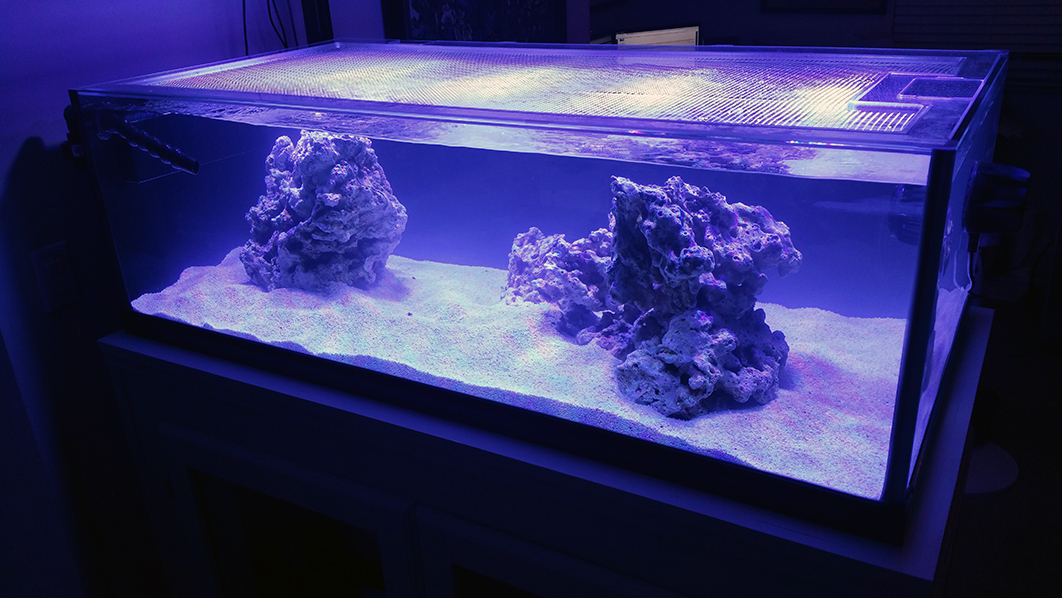 Very nice build! I'll be watching this one!

I also have a rimless 80 and love it. I also went the route of building my own stand so it could be at the height i wanted.

Tank looks great! what is the long term goal for this setup? mixed reef? sps only?

mrbh22 said:
I also have a rimless 80 and love it. I also went the route of building my own stand so it could be at the height i wanted.

Tank looks great! what is the long term goal for this setup? mixed reef? sps only?
Click to expand...

SPS only is the plan, but I might include an Acan garden.


Chris Adams said:
great job on the stand
real nice looking setup you are putting together
Click to expand...

Thanks Chris, maybe you can check it out sometime.

I love working with 8020! Keep this thread updated, I really like these tanks!

Nice build! May i ask why you didnt get 2 radion xr30s?

Sorry, (giggling), it's beautiful, but frowns from wife and dog remind me of my husbands work too!

Always love it when a great build thread comes around again.
Well done my friend.

I love the light bracket and the aquascape! I'm a big fan of a nice, open sandbed.
OP

Aznxgqboyx said:
Nice build! May i ask why you didnt get 2 radion xr30s?
Click to expand...

Sure! I was a little conflicted on this personally but I had my reasons. For the Gen 3 Radions Ecotech set the MAP at 399 for the XR15 and 749 for the XR30. Because of this, I think last generation it kind of made sense to go with 30's because it had the built in 50 dollar savings, less cords, and less mounting arms.

However, the Gen 4 pricing set the XR15 at 399 and the XR30 at 799, so there was no cost savings in using 30's over 15's. Because of the DIY light mounting I was doing, the cords would not be visible and I wasn't going to need to buy mounting arms. Because I effectively removed the downsides of XR15s it only left what I perceive as benefits.
Not all of these "benefits" are likely or even planned, just options I felt I'd have available if I chose 15's instead of 30's.

Debramb said:
Sorry, (giggling), it's beautiful, but frowns from wife and dog remind me of my husbands work too!
Click to expand...

I definitely understand! It's getting to the point that I only work on the tank when my wife isn't home. I think my stress gives her anxiety! She doesn't understand how I can enjoy a hobby that is always finding ways to frustrate me.

Diesel said:
Always love it when a great build thread comes around again.
Well done my friend.
Click to expand...

Thanks Diesel. I plan to update it again soon but I'm still a little busy for a proper write up.

Thanks for the kind words!

tomtom2245 said:
I love the light bracket and the aquascape! I'm a big fan of a nice, open sandbed.
Click to expand...

I wasn't originally happy with the aquascape, but I never am. Every tank I've ever made has been be fooling around for a couple of hours, giving up, and then just coming to like to design later. I too enjoy lots of open sand. With this build I planned to only do SPS and I promised myself I'd have as little rock on the sand as possible and no corals on the sandbed!