Has anyone had experience culturing Americamysis bahia? I just got mine yesterday and acclimated them to a 20 g culture tank. I'm feeding BBS. Circulation is 2 air stones. I'm not trying to do this on a large scale, I just want to provide some live food for my erectus and dwarfs. I might set up another tank for baby mysids.

No experience yet, but it’s on my todo list. 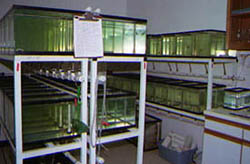 In this months offering, Martin and I assist in feeding those finicky fry by providing two additional microfoods; one large -mysid juveniles and one small invertebrate veligers.

I tried and live mysis cost a fortune... they did ok for a while on bbs but they go through a lot ... I’ll hang back and follow
OP

Doctorgori said:
they did ok for a while on bbs but they go through a lot
Click to expand...


ichthyogeek said:
No experience yet, but it’s on my todo list.

In this months offering, Martin and I assist in feeding those finicky fry by providing two additional microfoods; one large -mysid juveniles and one small invertebrate veligers.

Thanks for the link, I'm reading it now.
D

ThePurple12 said:
Can you elaborate?


Thanks for the link, I'm reading it now.
Click to expand...

yeah I used them as a cleanup crew for my seahorse fry as suggested by Dans vid. Anyway if you slip up and the bbs get low then shrimp start thinning out... cannibalism Is supposedly normal ...
I saw a few young in’s but couldn’t get em going generationally

Gotcha, so lots of food is key.

My LFS has a 20gal sump packed with caulerpa, with a small moray of some sort somewhere in there, that has a healthy population of mysids. Most of their systems have a few somewhere, but the sump in particular has lots, if you look. Not quite culture levels, it just looks like they've decided to have a mysis display.
OP

Probably, but since I'm already hatching BBS for my dwarf seahorses, it's not a problem.
OP

Anyone know what the fry eat? BBS look a little big for them.

It's been some years now but I used to culture mysids and sell to other hobbyists and one store. After a couple of years though, I quit doing it because first of all, to do it in any meaning full numbers it is very labour intensive and second, because it was labour intensive I charged $1 per mysid (which was $.25 less than stores here charged at the time) and that in itself narrowed the market tremendously.
I started off by removing mysids from my reef tanks for the starter cultures, placing them in Rubbermaid storage tubs I had lying around that I filled the bottoms with rock rubble to give hiding places for the mysid nauplii. It took some time but the population got to harvest numbers and to harvest I used a small powerhead to blast the rubble to force the mysids into the water column where I scooped them up with a mesh net large enough to get the adults but allow for the nauplii to pass through. Biggest problem I had was after some time, the increasingly built up detritus in the rubble got blown up as well and I had to do a further separation for the final harvest. The harvestable numbers from two Rubbermaids (I think they were about 15-20g but don't really remember now) would not sustain a pair of seahorses on it's own but was a good source of a secondary food. As word got around, I had people wanting to buy them so I ended up researching and expanding.
I progressed to making a mysid generator based on the one that MBL Aquatics had posted on their website at the time, (no longer there) using a 20g tank. However, due to the cannibalistic practices of the mysids, I had to have 10 ten gallon tanks to be able to keep the progressive sizes separated as even only minor differences in size meant the larger ate the smaller.
As you can see, the workload was intensive when you also had to keep all these tanks clean and what started out was an enthusiastic adventure turned into a laborious task.
OP

I definitely see what you mean RayJay. I‘ll try your rubble idea while also transferring babies to a separate tank or 2. Did you notice the babies eating BBS?

Yes. I fed them bbs plus spirulina powder.
OP

OK great, I'll use both

Don't use too much spirulina powder as the more you use the more often you have to clean. For ones that are about 1/4 size and up I used only the BBS but I never enriched them, just hatched, sterilized and added. Not really sure if the sterilizing was necessary though.

I've been thinking about breeding them but as outlined above, the effort would hardly justify the outcome.

Back in Germany, being close to the coast, I was able to catch them by the bucket-loads in the drainage channels right behind the seawall (the correct term for that type of seawall seems to be considered a dirty word here) where they formed huge swarms in the fall. Sometimes swarms even made it into the fountain of my University. In the fall season I was usually able to catch so many that I could freeze enough to feed 20 tanks with broodstock fish for over a year and still give some away to friends. 10 to 20 kg per trip were quite normal. The quality of those mysis beat anything you could buy in stores.
I could catch some year round, even in the winter as long as there was no ice on the water, but only enough to feed my seahorse tank and as live food treat for the rest.
I was told that the Quarry Lakes here in Fremont have Mysis but they only come up to the surface at night when the lakes are closed... and I have not explored the creeks going into the bay because access is difficult and I think most places are protected bird sanctuary zones.

I have the little tropical reef Mysids in my tanks in pretty decent numbers but those guys are very fast and hardly ever sit still long enough for a mandarin to catch it.

While those reef mysids are fast, the nauplii are not. Set up a siphon tube (start it and plug the output end) in an area where you can see them cavorting between rocks at night leaving it until the next night or at least long enough for them to feel comfortable with the tube in place. Using a light with red lens, check when they are close to the tube and then quickly unplug the tube and you can siphon some out. Depending on just where it is placed you might get both nauplii and adults. It might take you a bit of practice to get good at it but it will come.

One big problem with culturing them is the adults like to eat the nauplii. The article mentioned above describes a pretty cool flow-through setup where the water in the container with the adults flows out through a mesh that lets the nauplii escape into a second container.

Larry L said:
One big problem with culturing them is the adults like to eat the nauplii. The article mentioned above describes a pretty cool flow-through setup where the water in the container with the adults flows out through a mesh that lets the nauplii escape into a second container.
Click to expand...

The flow-through setup is a must.

Can you share your source of where you buy them from? I am looking into raising them. I do raise brine shrimp though, and for a grow out tank, if you see your mysis dying, look into density of shrimp to amount of water.