So, I'm not new to the forum but this will be my first actual build thread.

A buddy of mine had a 220 freshwater tank with arowana's. I decided I wanted into the aquarium hobby but I knew I was going to go saltwater. I had never had any real aquarium so I started with a 75 gallon tank. I had moved out of my parents and into my own house. This was around 20 years ago at this point. I was so proud of my "skilter filter". I learned alot with this tank and the hobby has changed so much along the way. My 75 didn't take long before it was a 220, then I got a second tank and it was 120 gallons. I started off with power compacts for lighting, moved to halide/VHO Combo, powermodule T5's and got into LEDS with Gen 1 Radion's. When Vortech's first came out and they were like $400 for one mp40 I told myself there is no way, at the time I couldn't afford it and as time progressed and so did my income level I realized the value of you pay for what you get most of the time. That way of thinking has guided me with my current tank and is also helping with the new build.

My two tanks eventually turned into an acrylic 300 gallon, which I ended up selling when I sold my town house and we built a new house, had 2 kids along the way and I picked up a rimless 150 gallon. I had convinced myself this would be my forever tank. Great looking tank, good equipment, thought out design and build, this was the last tank. That was all well and good until my freshwater buddy bought a 600 gallon tank. He enlisted me to plumb it for him and get it going. Everytime I was there working on it my "big tank envy" grew and grew, so I was on the hunt. I had gotten quotes from different tank manufacturer's, been planning and planning and planning, I think I changed the dimensions 40 times. This tank was going in my office and I had decent space that backs up the to 3rd car garage. I currently have my 150 on that wall and it is partially plumbed into the garage where some of the filtration work is done.

I'm on the for sale forum one day and I stumble across a thread by @fishguy242 , hes got a tank listed for a friend, its still crated and ready for a new home. It was built by Custom Aquariums, they were one of my top choices to get a tank from. I originally wanted 10x3x30, I almost bought a 10x4x30 acrylic tank but ultimately decided not too. The tank he had listed was 7x4x30, 3 sides low iron glass. I was on the fence about another rimless tank at this size, my current 150 is rimless and has a red sea screen top for it, my concern was having a cover for it, I like wrasses and I have lost all sorts of expensive ones with no top. I wasn't against a frame but logistically it made since to have the frame. I work out a deal for the tank, put a listing on USHIP, and it shows up from Wisconsin to Charlotte NC in less than a week ( and it shows up in perfect shape)

So some original plans changed slightly with the new tank dimensions. It was a great deal on the tank and close enough to what I wanted and thought I could make a great setup out of it.

The tank arrived in September 2020 and is still in the crate currently. Because of the dimensions, the tank will have to come through the door to my office on its 30" side, which also means I have to take my door and door frame out of the opening. I also usually build my own stands and this time I knew I was going to go T-Slot so I could assemble it in the room. I reached out to Framing Tech and went over the design I wanted and a few weeks later I had it delivered.

A few pictures, the framing tech delivery, The tank in my driveway and the tank at the old owners house prior to being picked up and shipped. 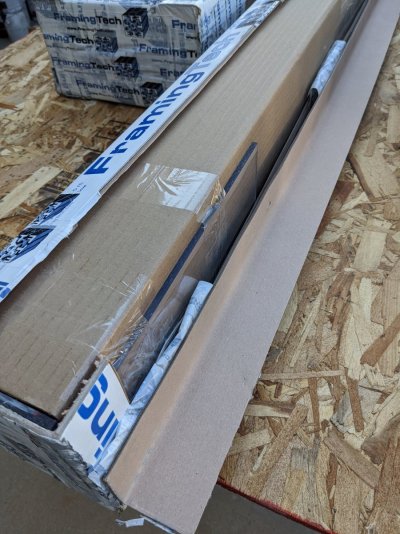 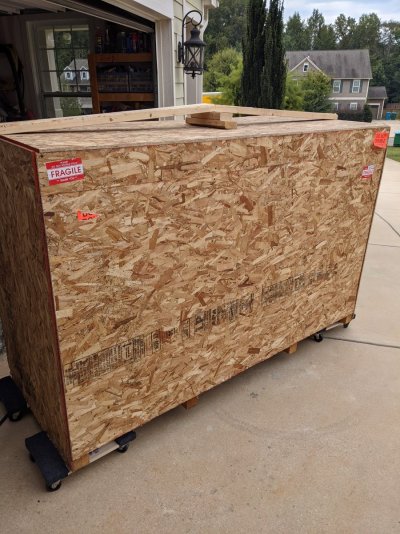 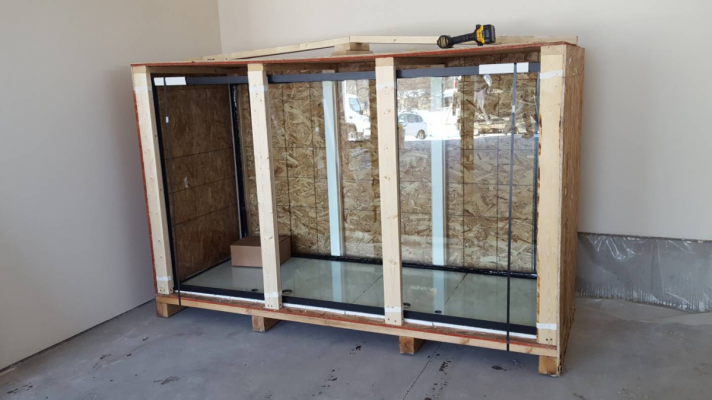 Prior to even finding the tank I had started to build a equipment pile in my office. I had a list of what I wanted in my head and an overall plan for the whole build.

Custom Modular Marine overflow.
The tank already had holes drilled for returns and overflows, it was designed to use Custom Aquariums in house overflows but I knew I wanted internal skimmer box and external overflow. I was able top provide the hole layout to Modular Marine and they custom built an overflow to fit.

i had been picking up Radion G4 Pros along the way all year, well then they came out with G5's. I was originally going to run 6-8 G4 Pro's with Orphek Bars. I decided to switch to G5's so I sold most of the G4's and have been purchasing G5's along the way. Minimum I will have 6 XR30 G5 pros I may stagger 4 XR15 G5 Pros if I need them.

I designed a light rack out of T-slot and had Framing tech cut the T-slot to spec and send it to me. The light rack will be suspended from the ceiling with the Radion's and Orphek bars mounted to it. I came up with a way to utilize Ecotechs RMS slides/brackets over the T-slot, I bought standoffs that further keep the radion off of the T-slot so the fan can still move air through the fixture.

Filtration:
I knew from the beginning I wanted to run some sort of filter roller on this tank, there are only a few companies that make one that could handle a tank this size and I decided on a Royal Exclusiv Vlies Filter. This is the stand alone version so I could have a sump tank designed to attach to it. I am going to have a custom sump built by Advanced Acrylics. I have an 80w UV and I may add another one.

Skimmer:
Royal Exclusiv recommends running a smaller skimmer with the Vlies Filter because it removes most of the stuff prior to the skimmer. I have a RE Bubble King Supermarin 200 that is still in box that I may use, I also picked up a Reef Octopus Elie 220 over black Friday, I currently run the 200 model on my 150 gallon and it has been an awesome skimmer with zero issues, so I'm on the fence. I have always run Reef Octopus skimmers so this would be the first Bubble King. I also have an external Super Reef XP 8000 but I think it would be to much with the filter roller.

Reactors:
I was going to have a PVC GEO CalRX built, and I still may, in the inetrim I got a great deal on an new AquaMAXX CalRX, its the biggest one they make and initially should work just fine, its currently on my 150 and I have had no issues with it. I have a large chaeto reactor, I may go refugium also, not sure yet. I have Vertex RXU reactors for carbon or GFO, they will be plumbed into the sump and will match the overall color scheme.

Control:
I have a GHL Profilux Mega Set that will help with control and monitoring
OP

Tank getting delivered in September 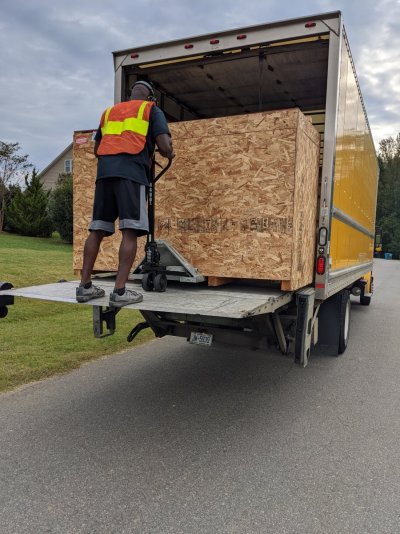 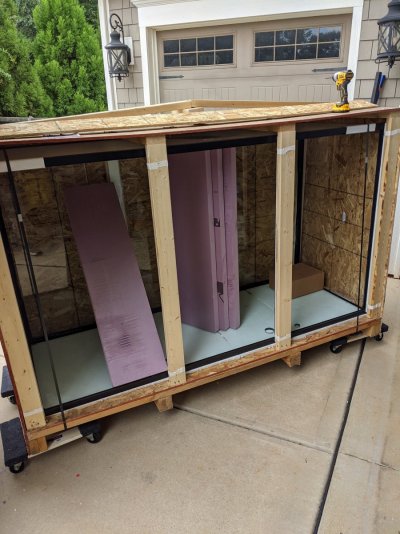 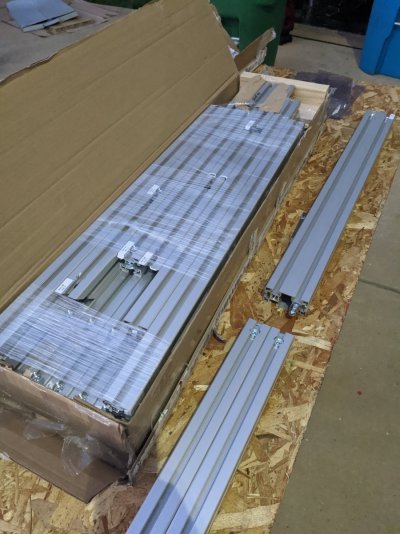 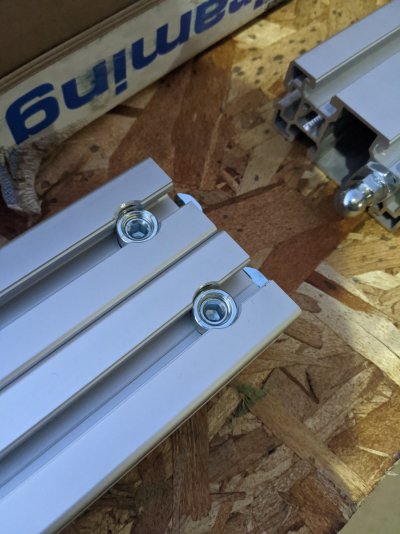 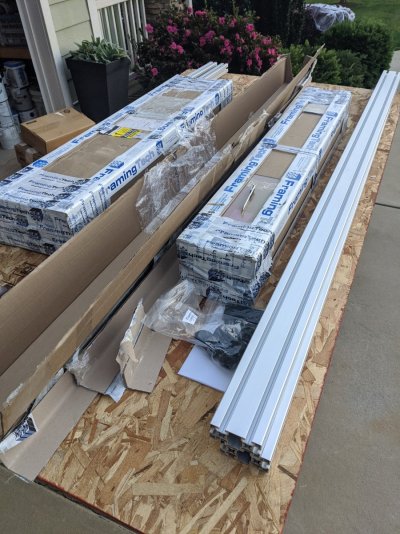 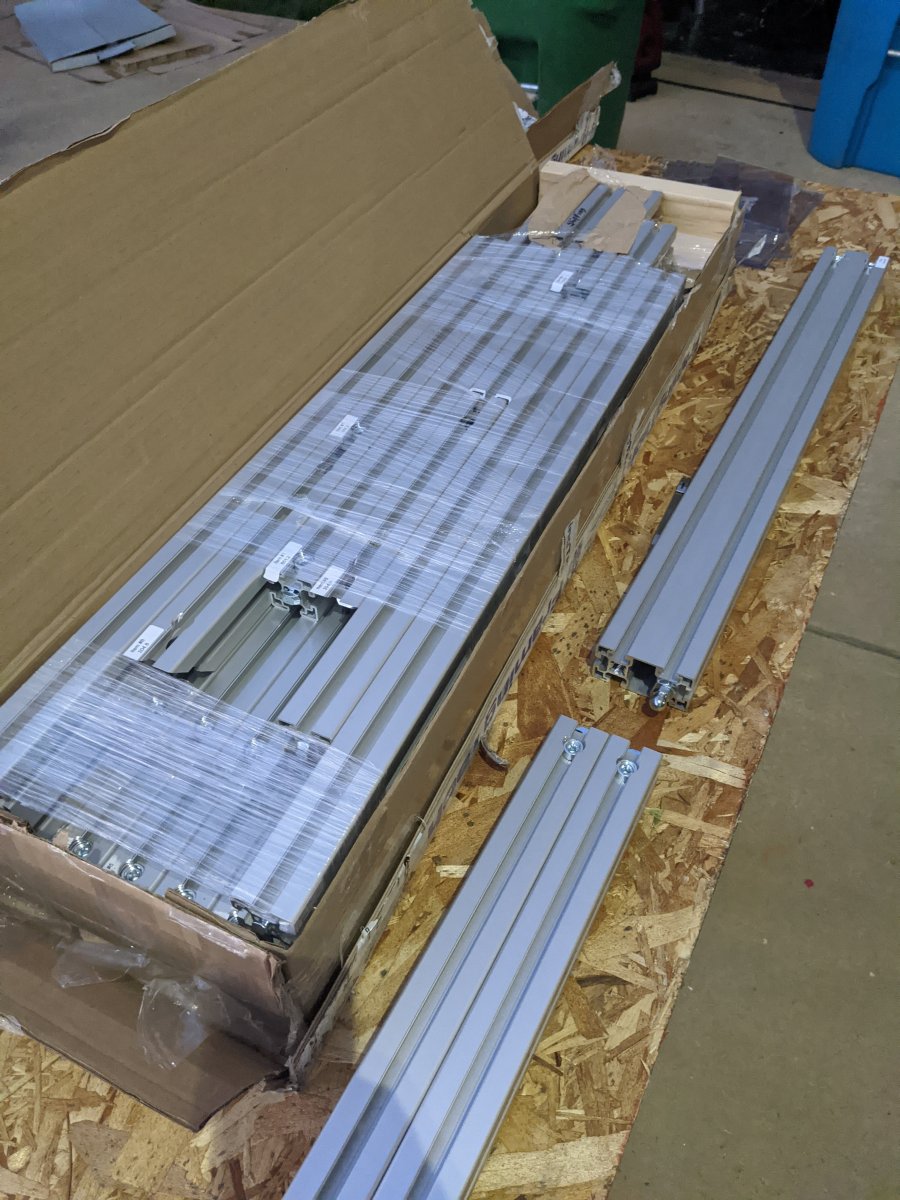 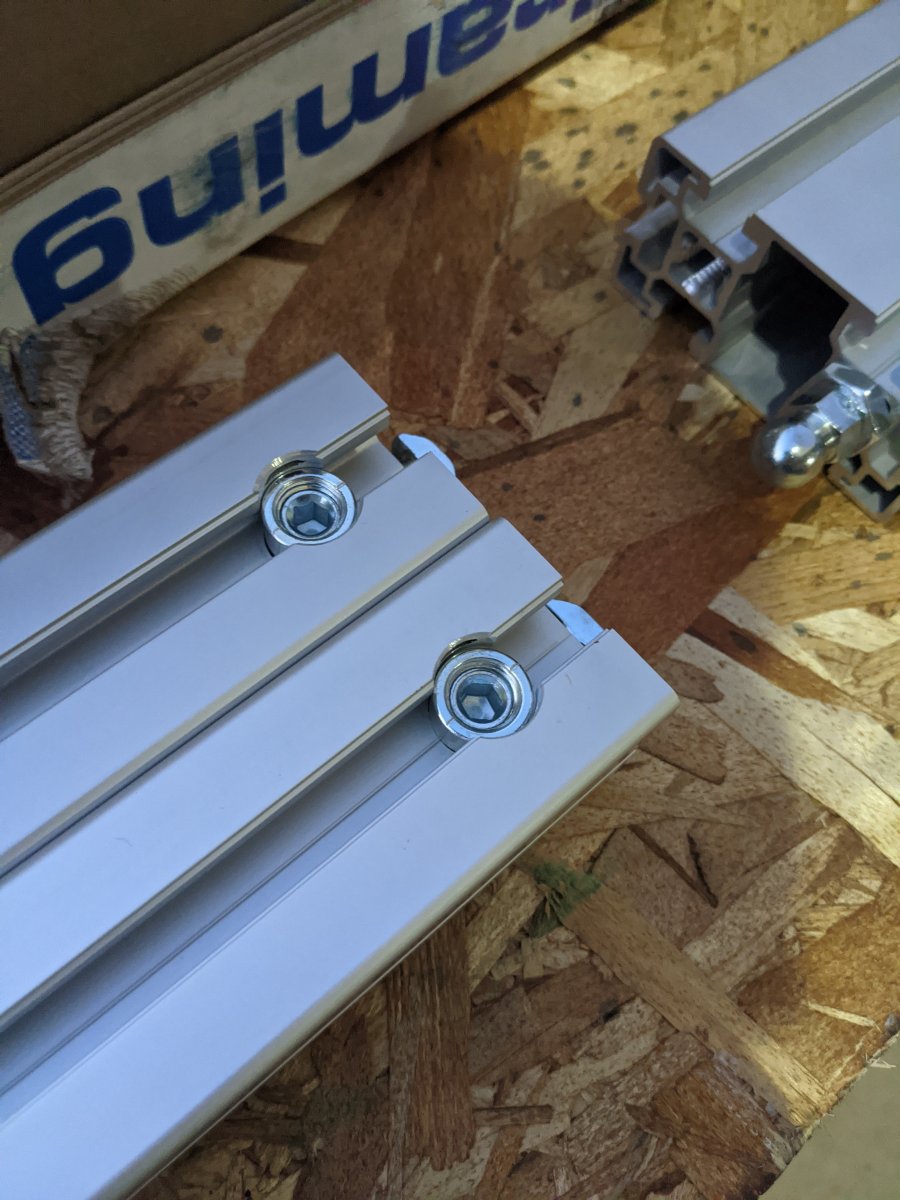 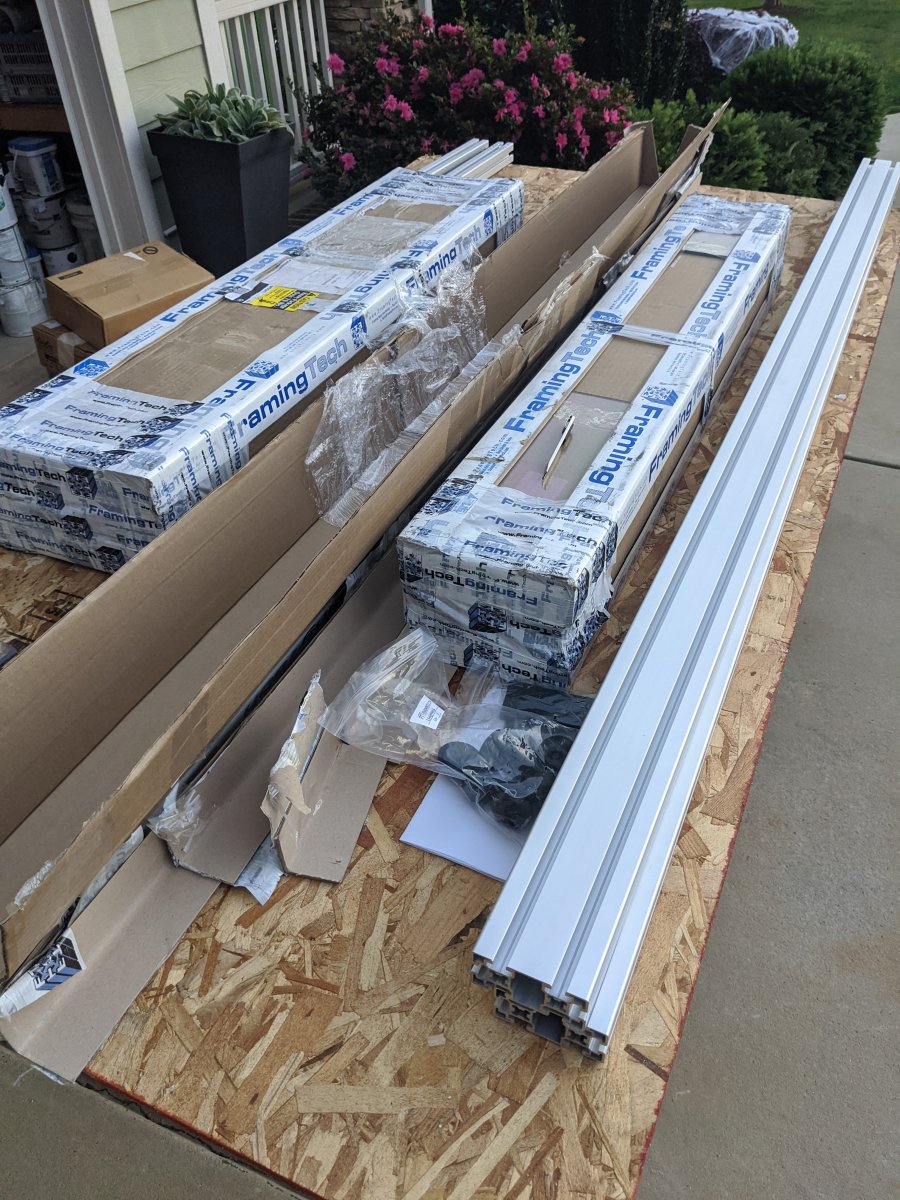 So we had a trip to Universal in October and it gave me a chance to pick this up. I got it in the back of the Honda Pilot with all the luggage 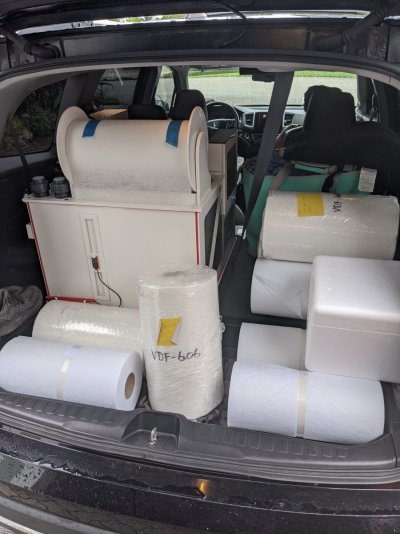 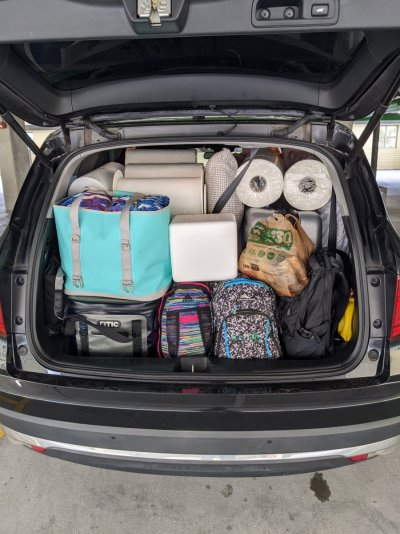 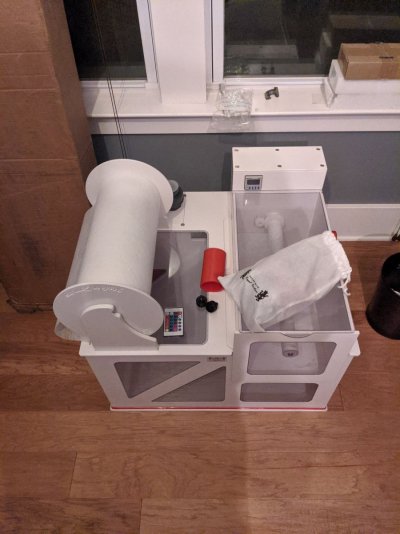 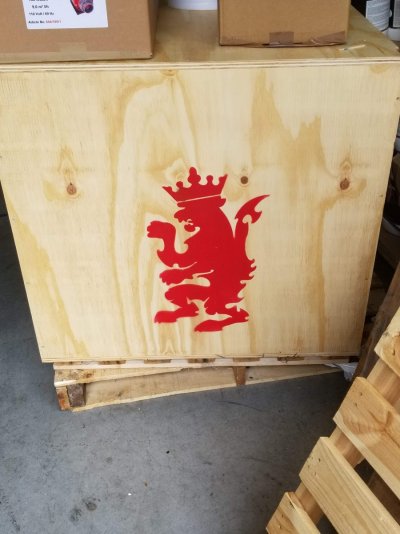 When I got the Vlies Roller, it has metric to US conversion unions, but its not setup for Bean Animal overflow to match the Modular Marine design. I reached out to @slief and he was able to help facilitate getting RE to design and build a custom intake to the filter roller so it would have 3 1.5" inputs. As usual RE even made getting some plumbing feel special 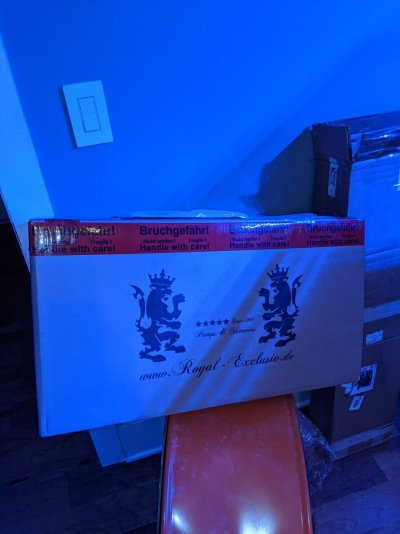 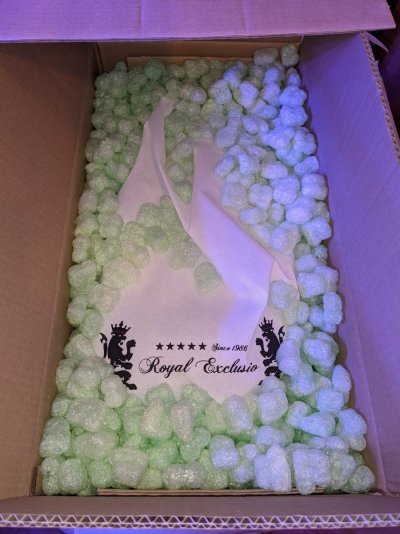 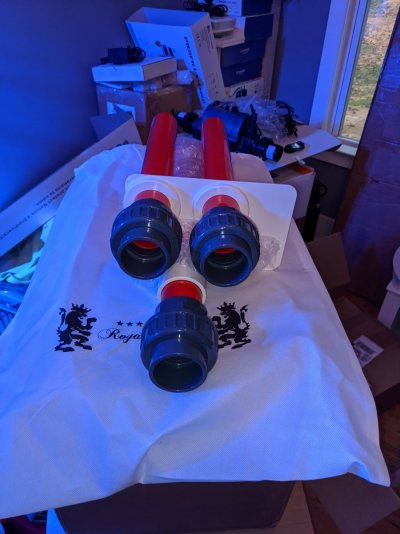 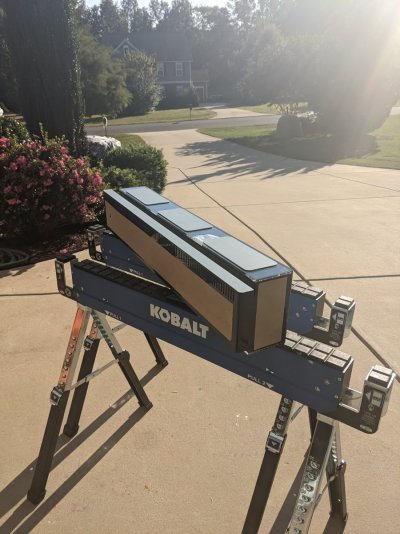 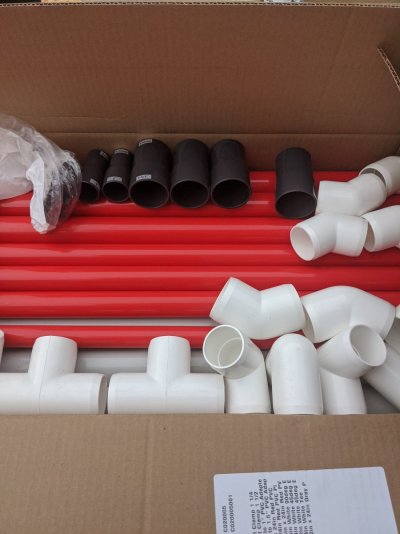 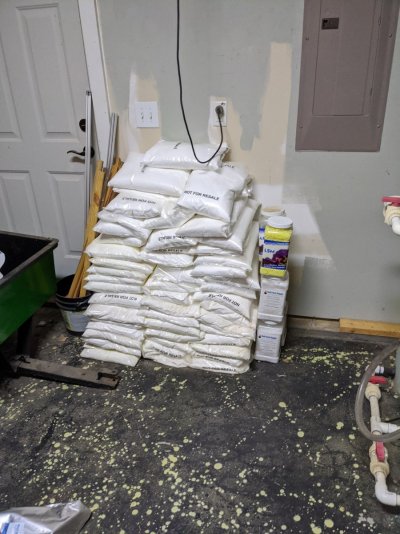 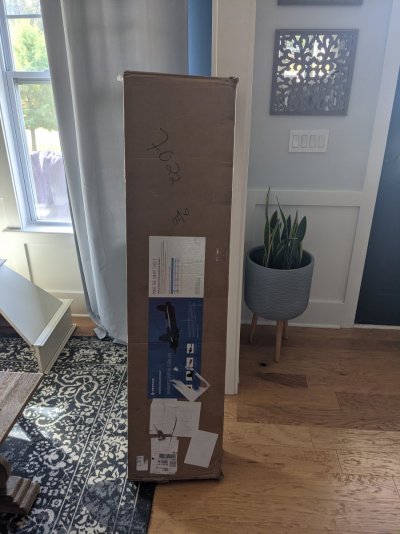 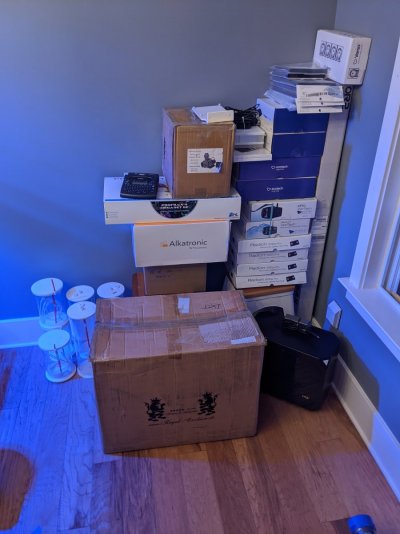 Heres what I came up with for mounting the radions to the T-slot. The spacers will get painted prior to getting everything installed. The T-slot fits perfectly into the plastic on the underside of the bracket itself. 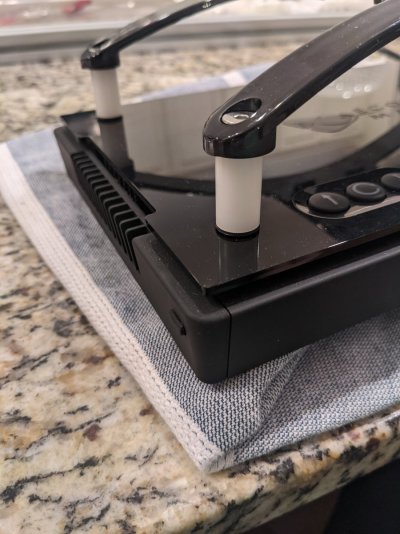 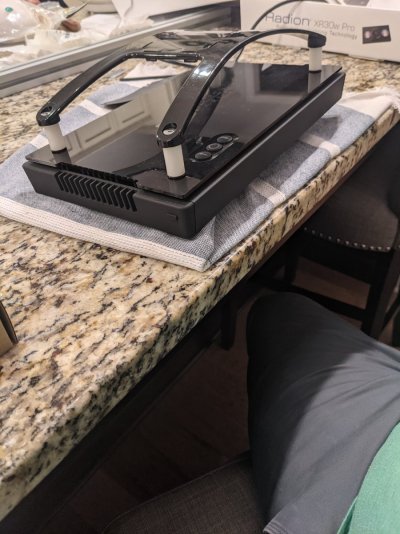 I've been sidetracked with projects around the house. I hope within the next month to start the process of moving my 150 from its current position to the other side of the room so it can continue to operate and house my livestock while the new tank gets setup and cycled.

I will update as it goes.

Lol @fishguy242 , you are correct, for some reason I was thinking you were him and had changed your handle.

Impressive tank and equipment list.. I wish I could find my skilter filter, wouldve been clutch for a QT tank
D

If you dont mind me asking, how much did that stand cost you?

This looks like a fun build to watch
OP

djf91 said:
If you dont mind me asking, how much did that stand cost you?
Click to expand...

Initially I was going to purchase the material and cut it and buy connectors to attach it, but letting Framing tech do that part and have the machines to tap all the ends and everything that would be needed, the cost difference wasnt that much so I let them do it all, i just have to build it. The material was a little over $1400, so right at $1600ish shipping and tax to get it to me.

The biggest deciding factor was the ability to build it in the room, versus attempted to build one from lumber in the room, then having to sand it and finish it here just wasn't worth the sweat equity.

Great build so far. Looks like your not sparing any expense.

Typhon said:
Great build so far. Looks like your not sparing any expense.

Thank you sir. Working on logistics currently. I have to move my 150g to the other room in my office because it's sitting where the 500 will go. Once I get it moved this build should start moving quicker.
G

Awesome build
Love the width of the tank. You'll have some great aquascape choices! Looking forward to watching the build progress

Monster Build 500 Plus Not A Reef Vivarium