This will be sort of a retro & re-build thread of an old tank that I built years ago. This has never been posted here, but was on our local forum years ago. I will be digging it out of storage and starting it over, with some modifications. First the old stuff...

About 8 years ago I built rather unique (if not a little weird) 7 gallon nano tank. I called it Pirate's Reef. It was not your ordinary, run of the mill nano tank and was definitely not an all in one. It featured a small display with a large support system. Yeah, I know it was over the top and definitely not for everybody, but I really enjoyed building something out of mostly left over aquarium stuff that I had laying around. I didn't spend a lot of money on it and had fun putting it together.

I just thought I would share the old tank and start off the rebuild with this post. If there is any interest in it, I will continue the updates. 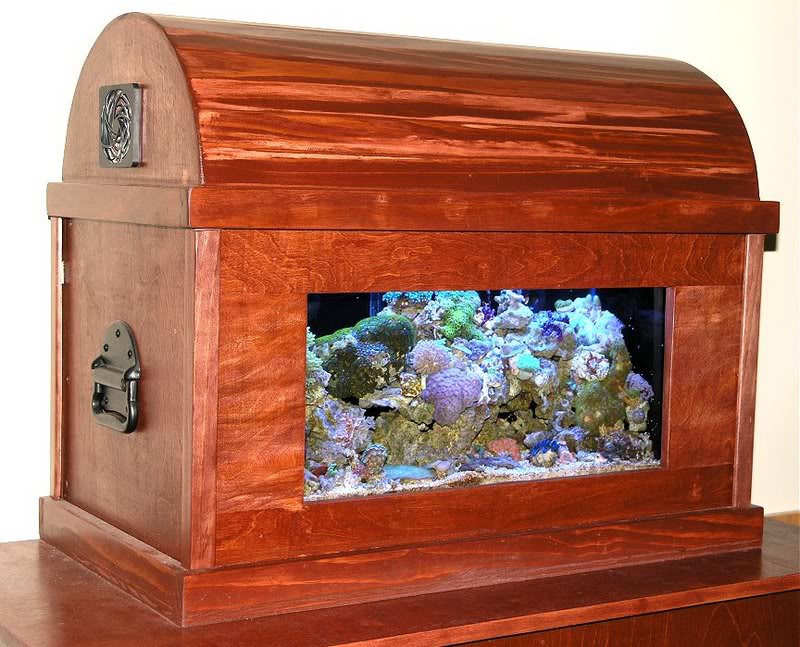 This whole idea of building an over the top nano tank was inspired by a contributing writer to FAMA Magazine, named John Burleson. I remember sometime back in the 80s, he wrote a story about a tank he had. I want to say that it was a 29 gallon, in wall display. Behind the tank, in his tank room, was an entire wall of support equipment of just about anything you could imagine. I thought, "That guy's nuts! I have to do that someday."

The tank would have a lot of plumbing on it, so I wanted to conceal it within an enclosure, with only the front as a viewing pane. I thought for a while about what the enclosure would look like, before coming up with an idea of having it inside of a treasure chest. Like an old pirate's chest that would look to be full of colorful jewels. So, I built the tank from scratch and built the chest. 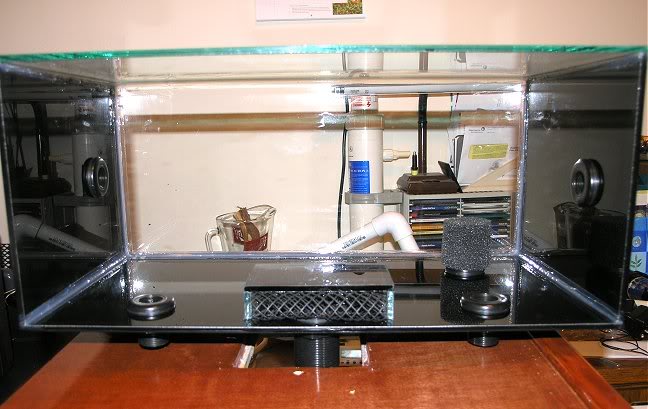 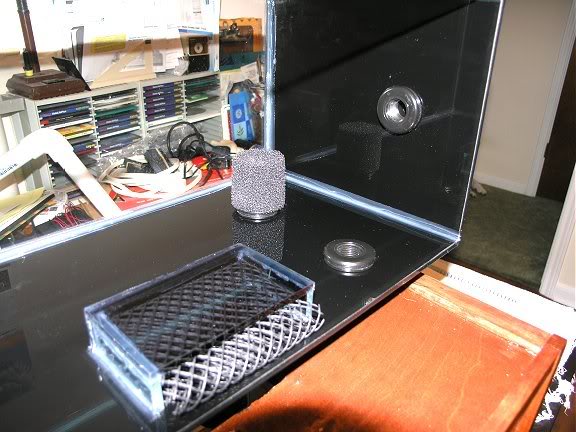 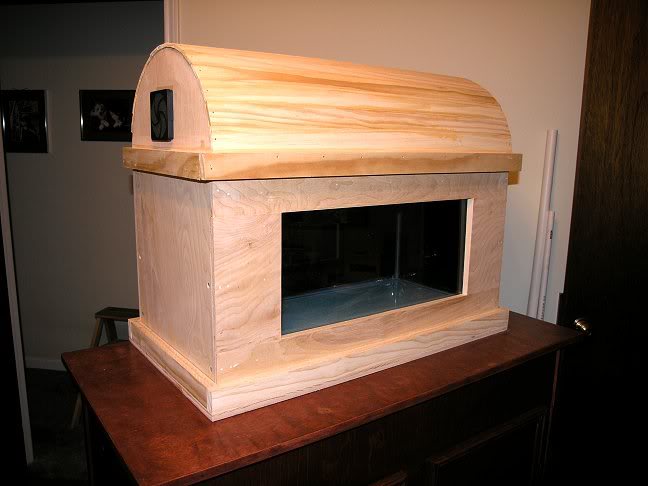 The water movement in the tank was from a closed loop system, utilizing a SCWD. It provided a nice gentle side to side alternating wave motion in the tank. 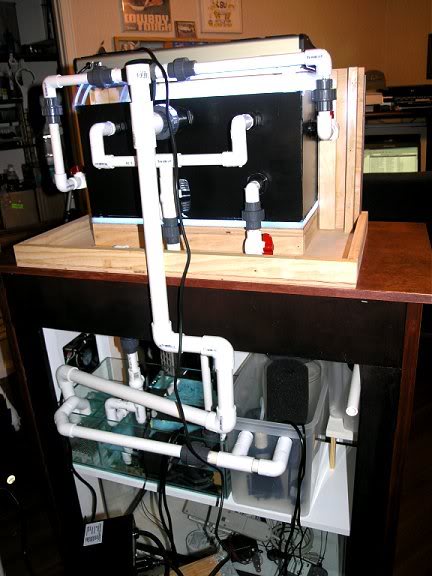 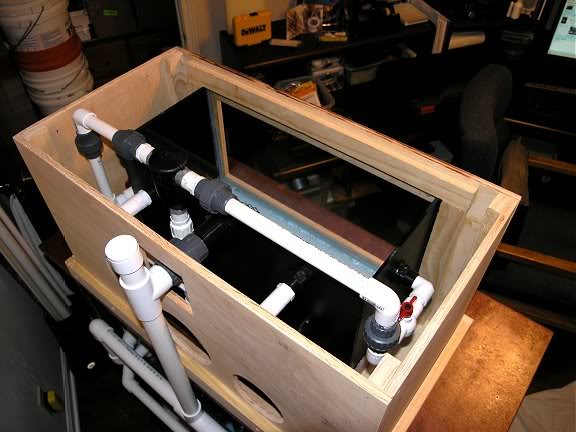 I built a small, custom sump for it also. 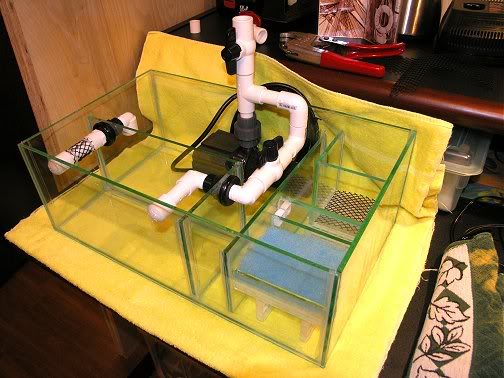 Even had an old skimmer in a tub and a refugium. 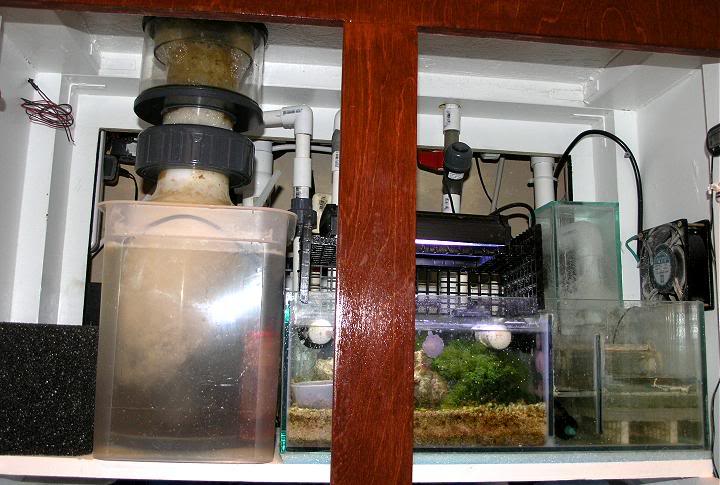 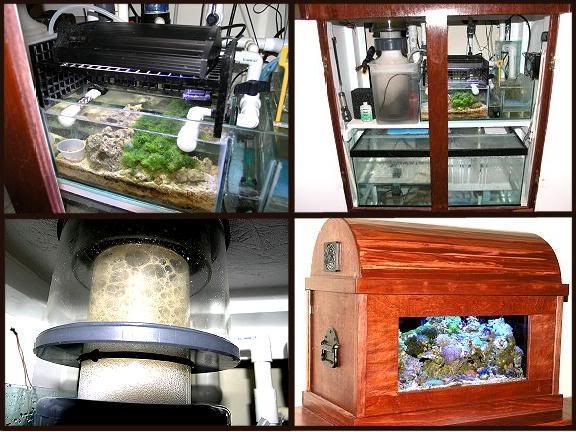 I ran the tank for a couple of years and eventually robbed the booty inside for my 140 gallon tank that I had set up. I took the tank down, but never sold it or discarded it. It just sat in the attic for the past 5-6 years. Here is a FTS and some pics of the tank and the inhabitants. 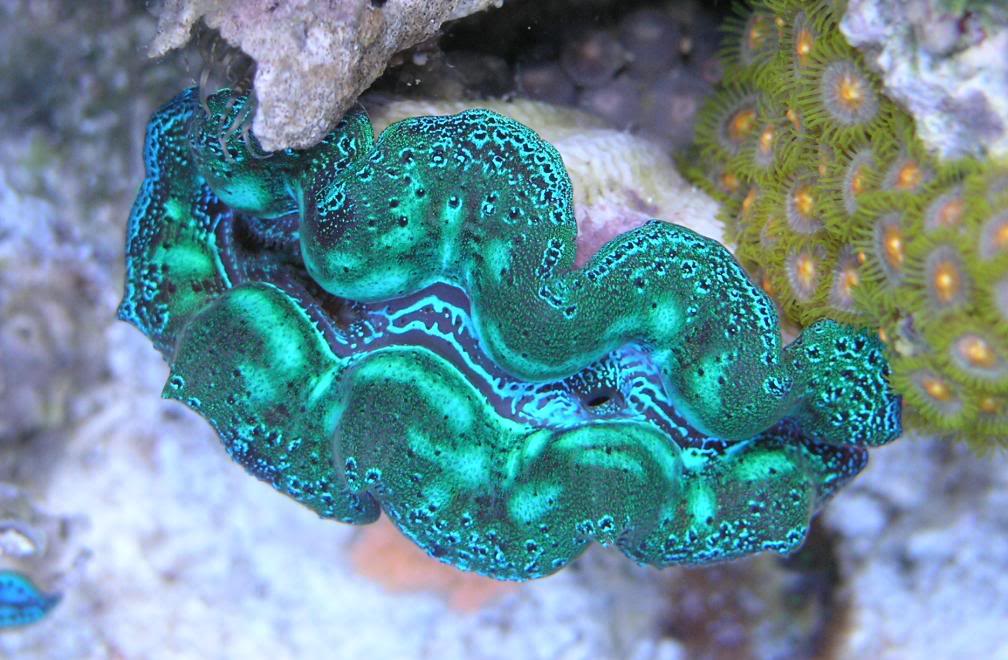 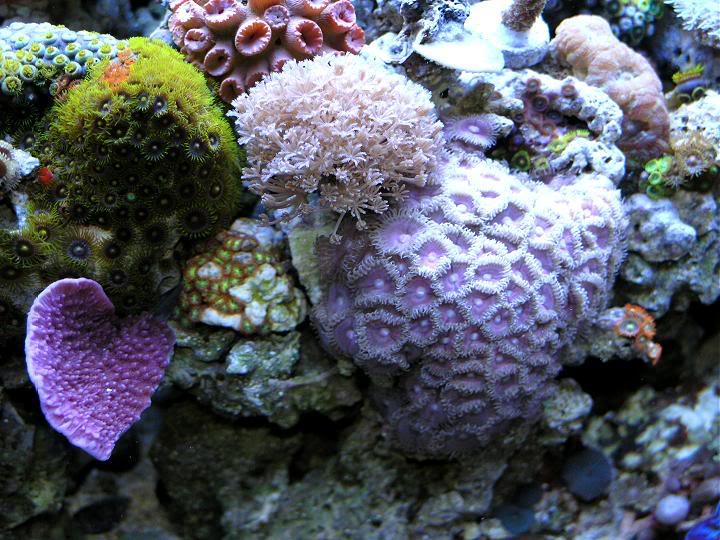 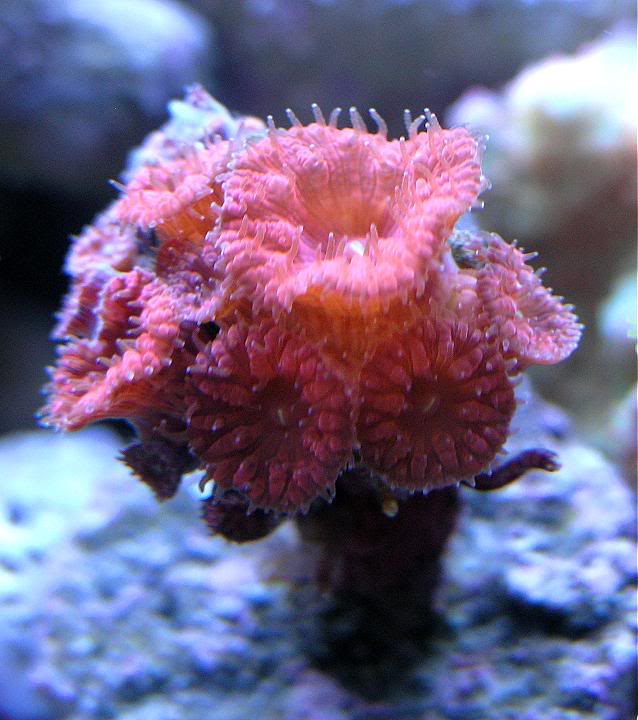 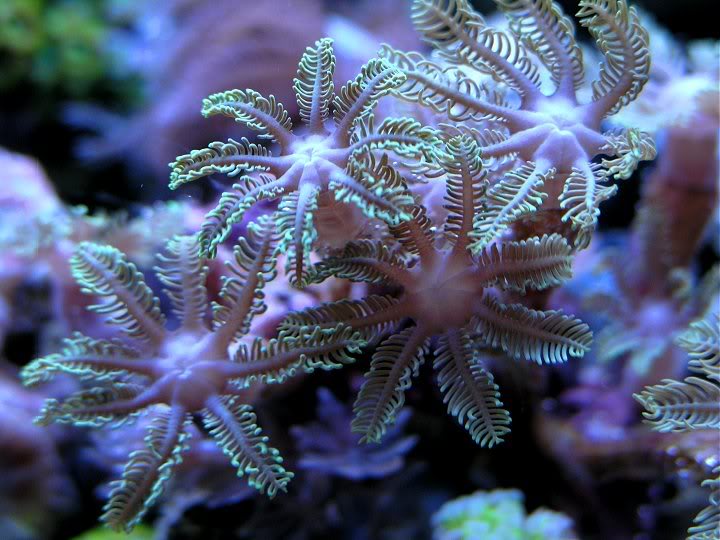 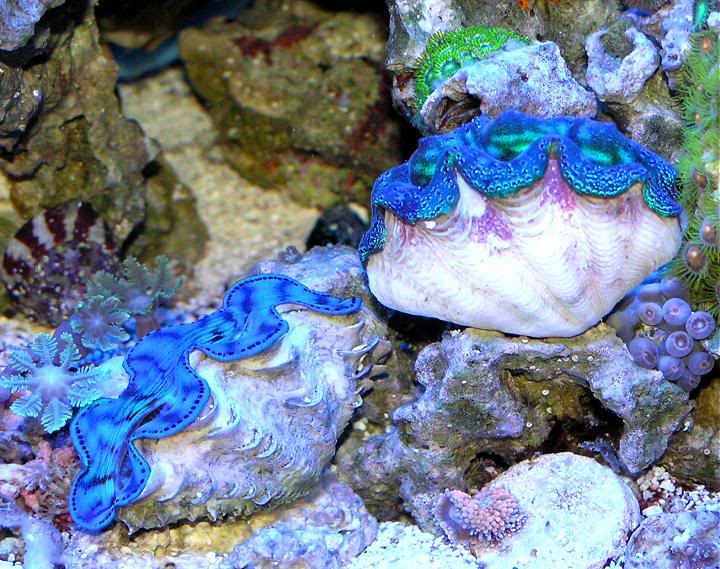 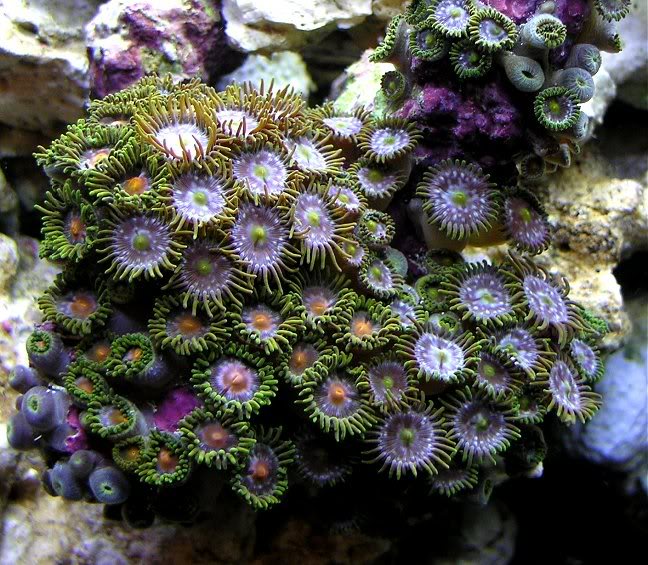 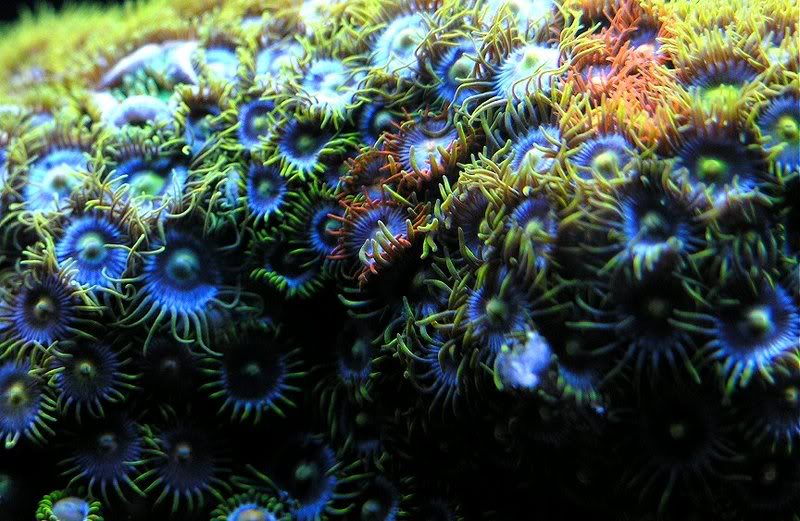 Anyway, a few weeks ago, I decided to re-build the tank, but make it a little different this time around. I went up into the attic to see what was left of it. The glass 7 gallon tank was found to be cracked, so I will have to rebuild that part. The chest was in pretty good shape, but the interior needed a fresh coat of paint.

So, this is just the first part of the story. I will continue the build thread of the upgrade from here. Thanks for looking!
Last edited: Nov 9, 2014

WOW!! Super creative and a well done job! Well thought out too!!

Looking forward to seeing you bring this tank back to life! It looked great when it was setup!!

Thank you. I know it isn't everyone's cup of tea, but I have found it to be a whole lot of fun. I am just glad that I didn't sell it or throw it out when I took it down.
Last edited: Nov 9, 2014

First thing was cleaning it up and applying a fresh coat of paint to the canopy and the inside of the chest. 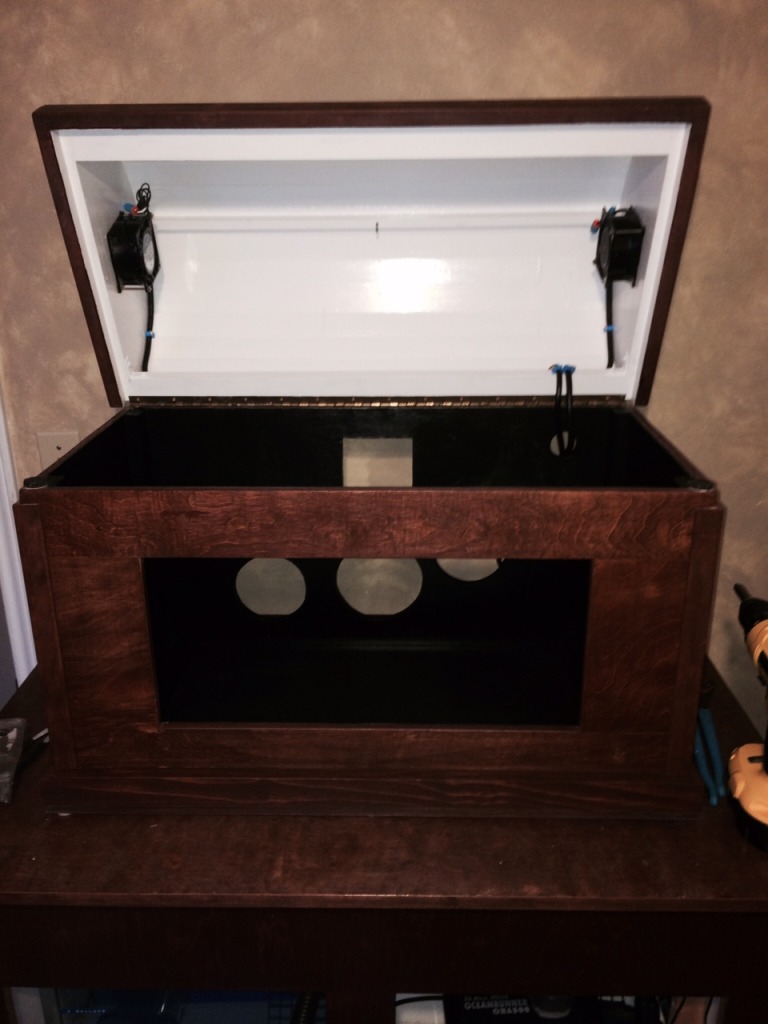 The exterior just needed a good rub down with some furniture polish. 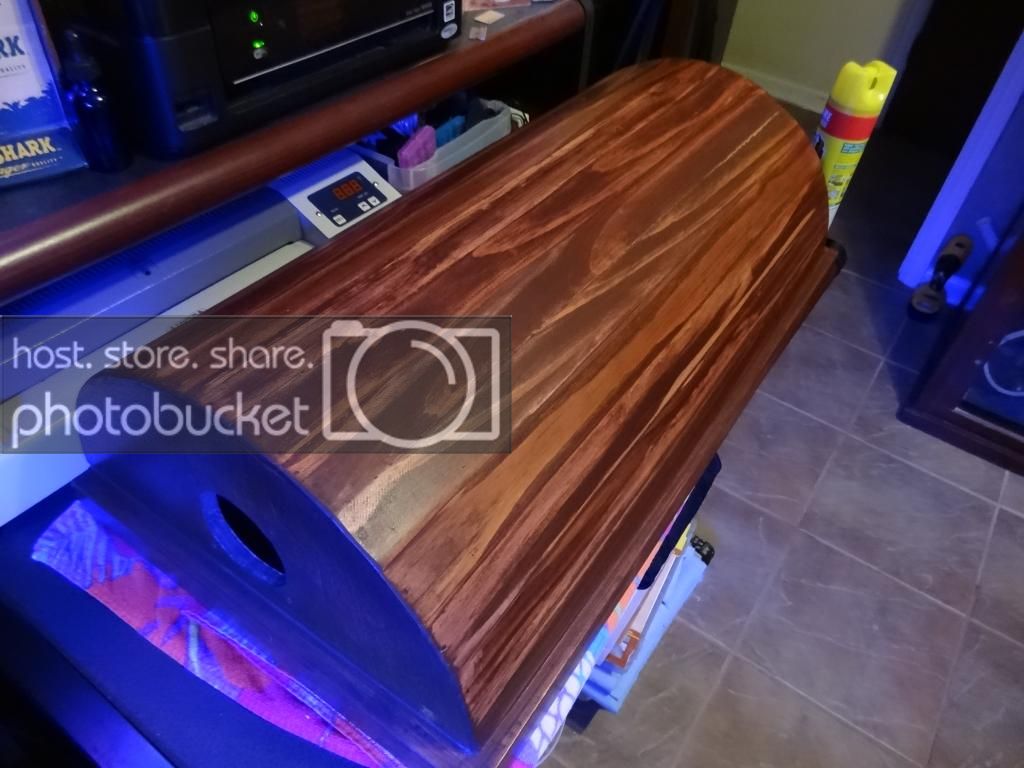 Unfortunately, the old tank had sustained some damage to the bottom glass and there were some scratches on the viewing pane. So, I have some new glass ready to rebuild the tank. Putting it together with regular 1/4" plate glass and black Momentive RTV103 black sealant. The holes will be re-drilled and some will be in different places on the new tank. Also going with a nano overflow from Glass-Holes this time. The one I made was adequate, but a little small. 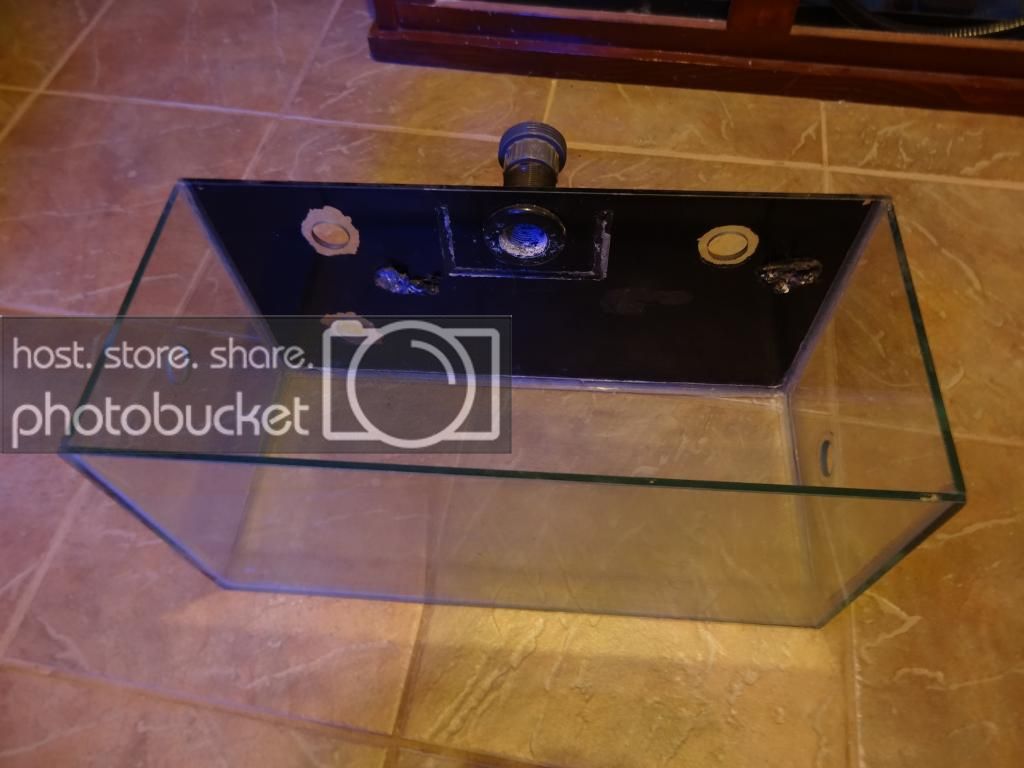 I also decided to dress up the chest a bit with some authentic looking chest hardware. Here is what it looks like today. 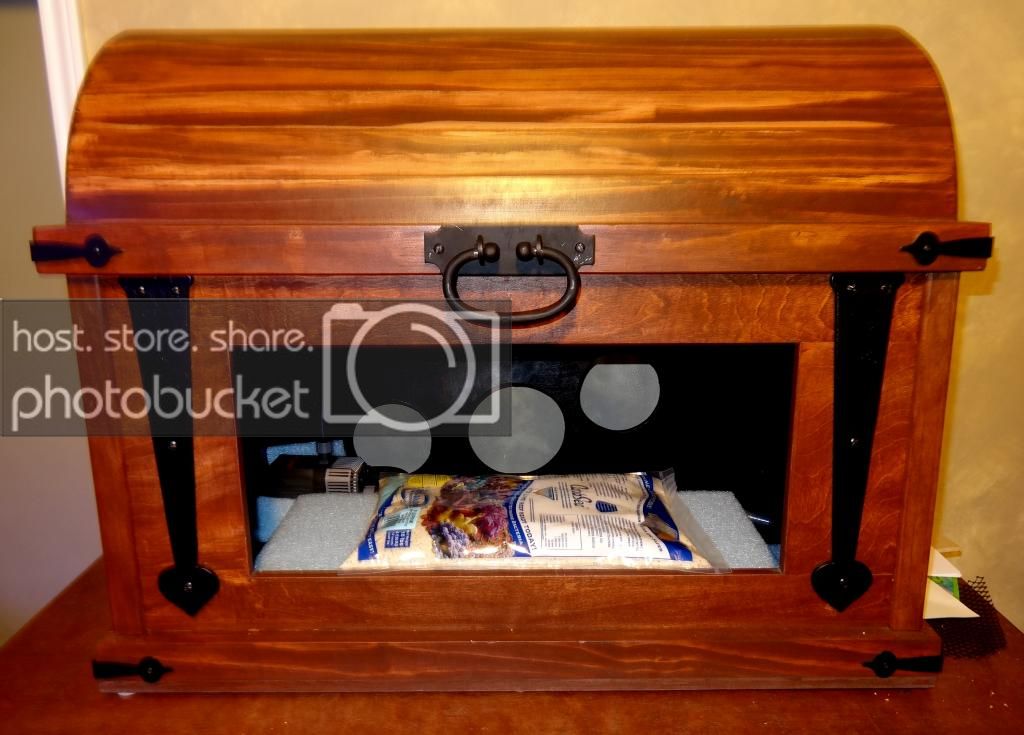 I also went from the old T5 fixture that I was using to a Build My Own LED. 18" strip with a 20,000K color temp. I may even add a couple of retro T5s to get a Fiji Purple and a Blue Plus bulb over the tank. Depends on what it looks like when I get the tank together. 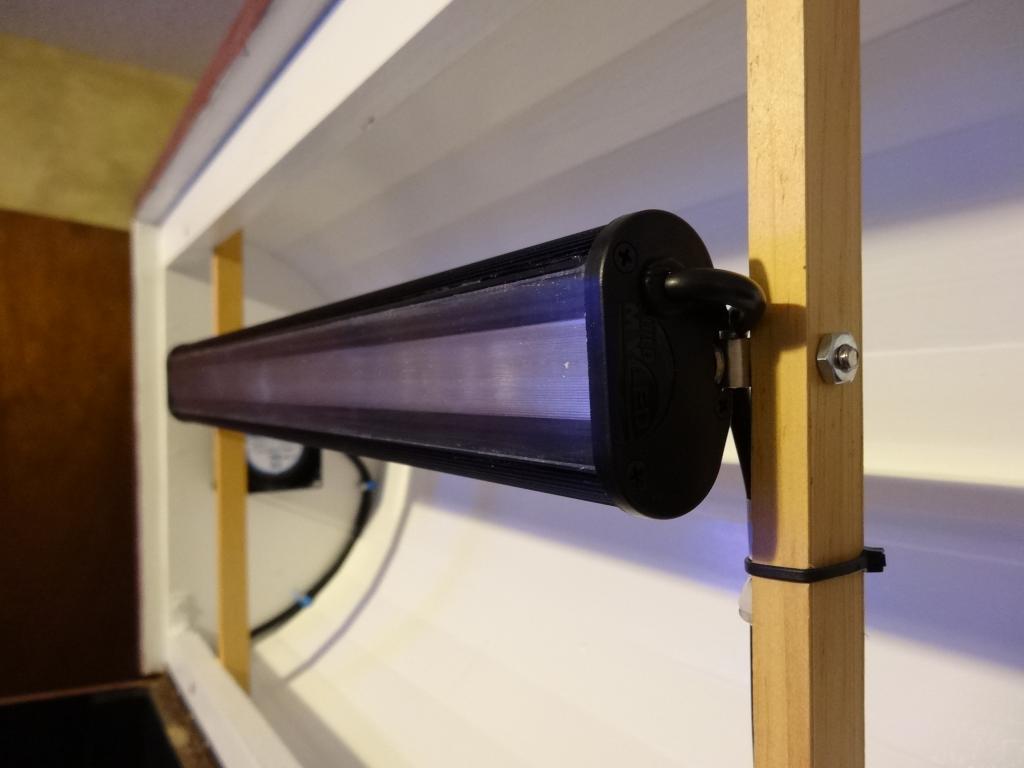 This will be the sump. A 20 gallon that was under the original tank and was used as storage for RO/DI water and fresh salt water for water changes. I have two 55 gallon drums of each six feet away from where this tank will be, so no more need for storage under the tank. The skimmer is an old EuroReef that was on my 75 gallon about 10 years ago. Cleaned up real nice and still looks new. I did replace the pump and added a gate valve mod to replace the old sponge and riser tube. Hopefully that will work better. 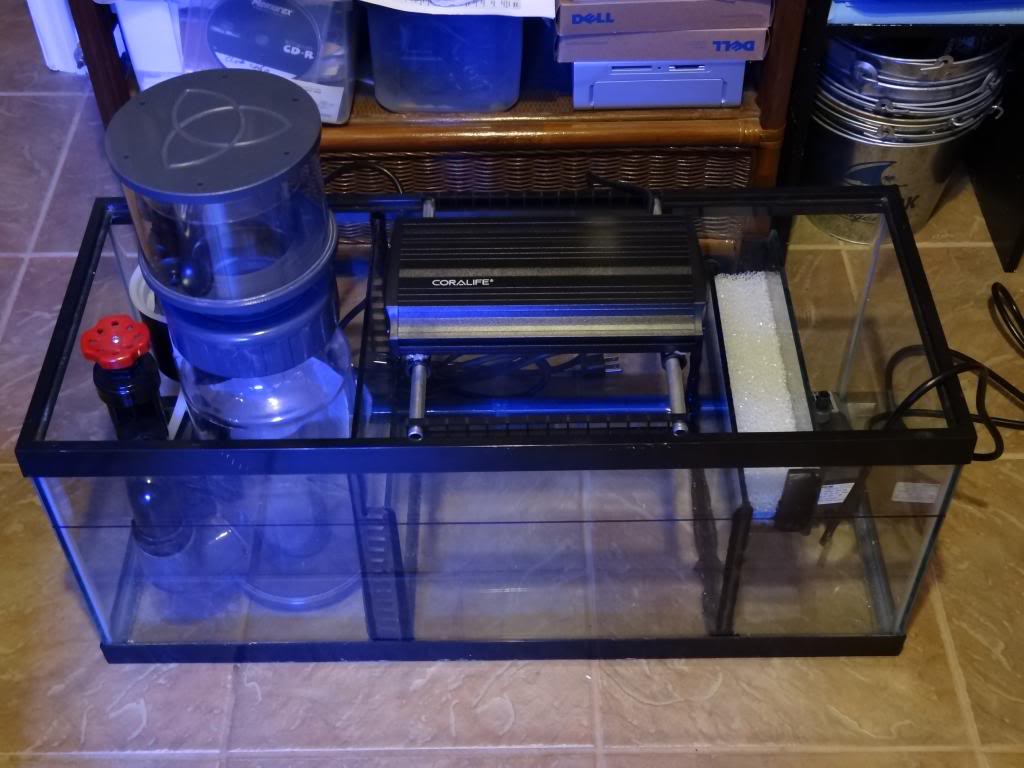 Those big BRS reactors will be replace with the mini-reactors that they now have available. These were just some that I had laying around from a previous tank.

The 5 gallon tank will be my ATO reservoir. 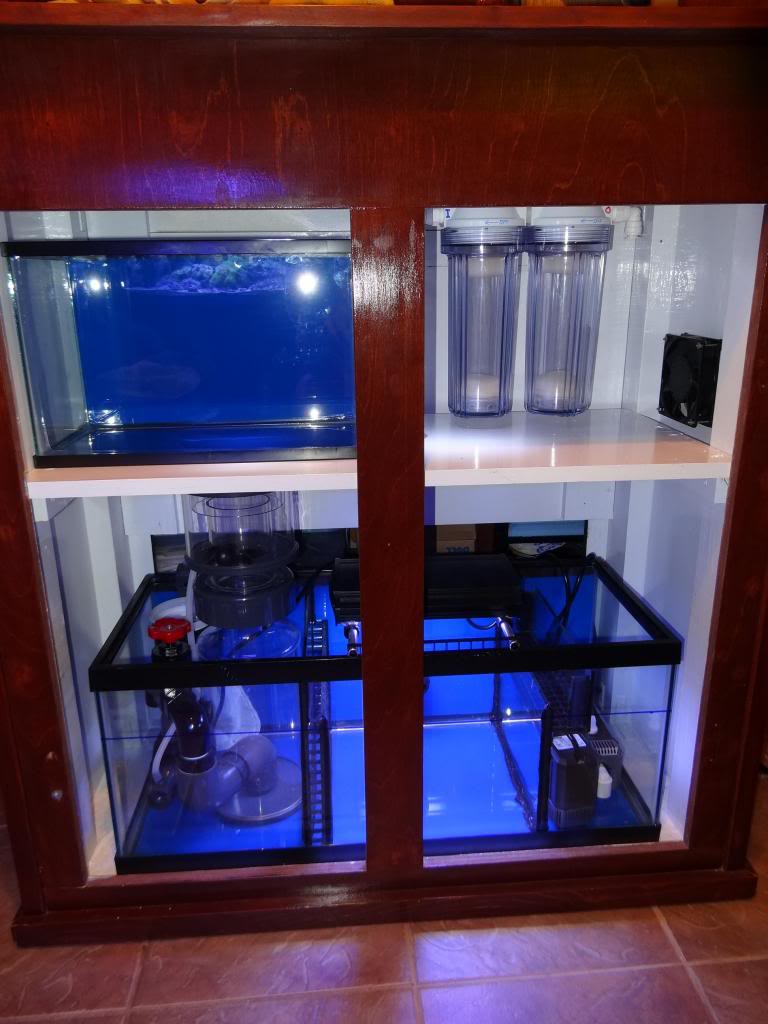 The fuge area will be almost as big as the display. 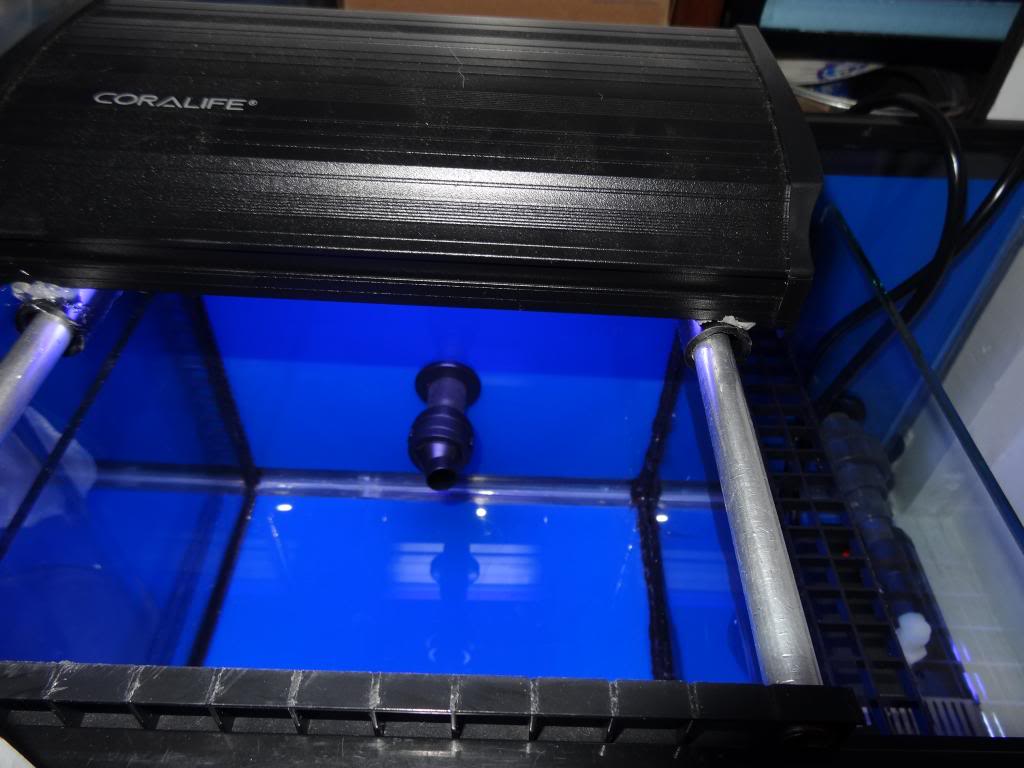 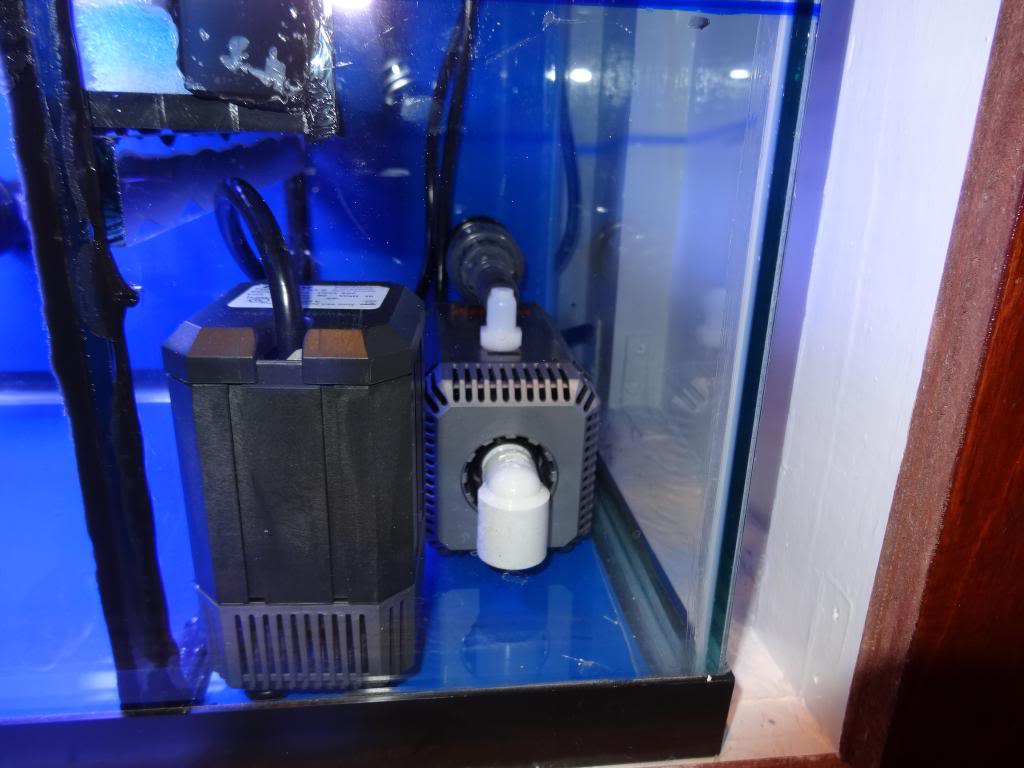 That about brings us up to date on the progress of the rebuild.
Last edited: Nov 10, 2014

I've seen a lot of new and upgraded tanks, but the DIY, craftsmanship, and attention to detail on this one hits home with me, beautiful, keep the PIC's coming!
OP

avasquez01 said:
I've seen a lot of new and upgraded tanks, but the DIY, craftsmanship, and attention to detail on this one hits home with me, beautiful, keep the PIC's coming!
Click to expand...

Thank you! I believe I enjoy putting systems together as much as anything in the hobby. It is hard to enjoy that end of it if you stick to one tank. Of course, I have a 140 that is also under a rebuild. I think it just about always is. I don't have a thread on that tank yet.
Last edited: Nov 10, 2014

Ha! Yeah that is weird. Imagine that.

awesoem chest. following along and see what you do with this one. can't wait
OP

Lilmatty5dimes said:
awesoem chest. following along and see what you do with this one. can't wait
Click to expand...

Thanks. I appreciate the compliment. I am not known for speed. I did work on it a bit today, but had to order a drill bit for a 3/4" bulkhead. I thought I had one in my toolbox, but looks like it is still loaned out to an unknown location.

I did get the ATO situated. This would have been an ideal opportunity to gravity feed top off water to the sump, via a float valve. But really not enough room in the sump for the valve. So, I will be pumping the water upward (with an Aqualifter), into the side of an open ended 1/2" tube from the reservoir. The water will just run freely down to the sump, without the possibility of starting a siphon and draining the reservoir.
OP 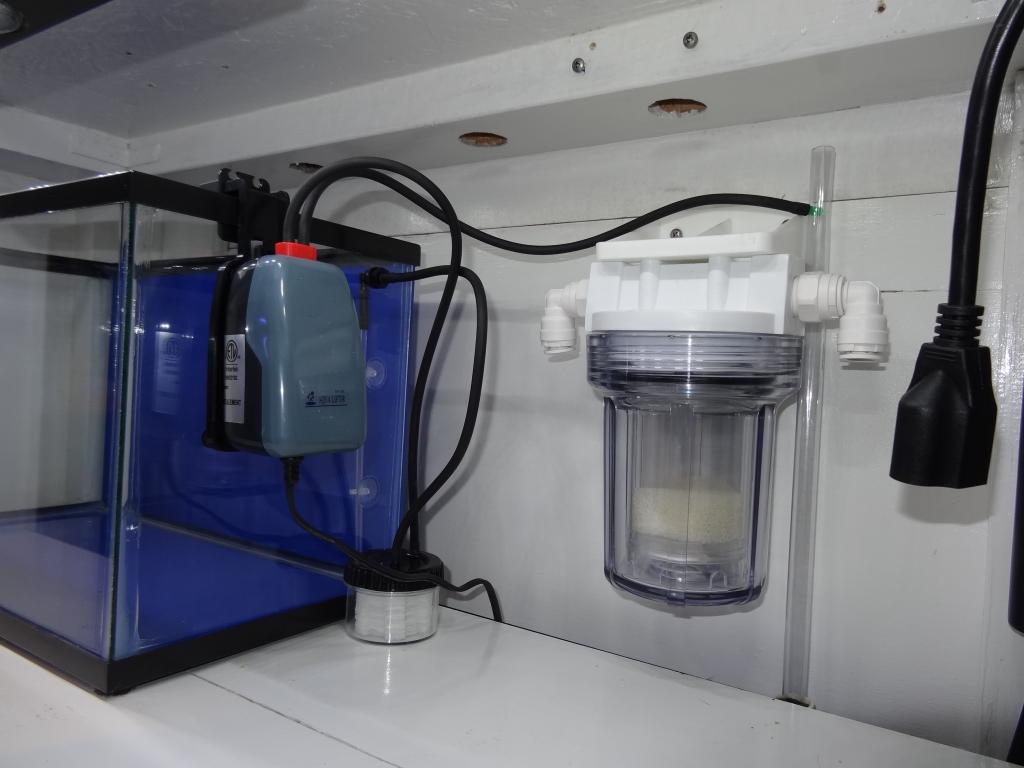 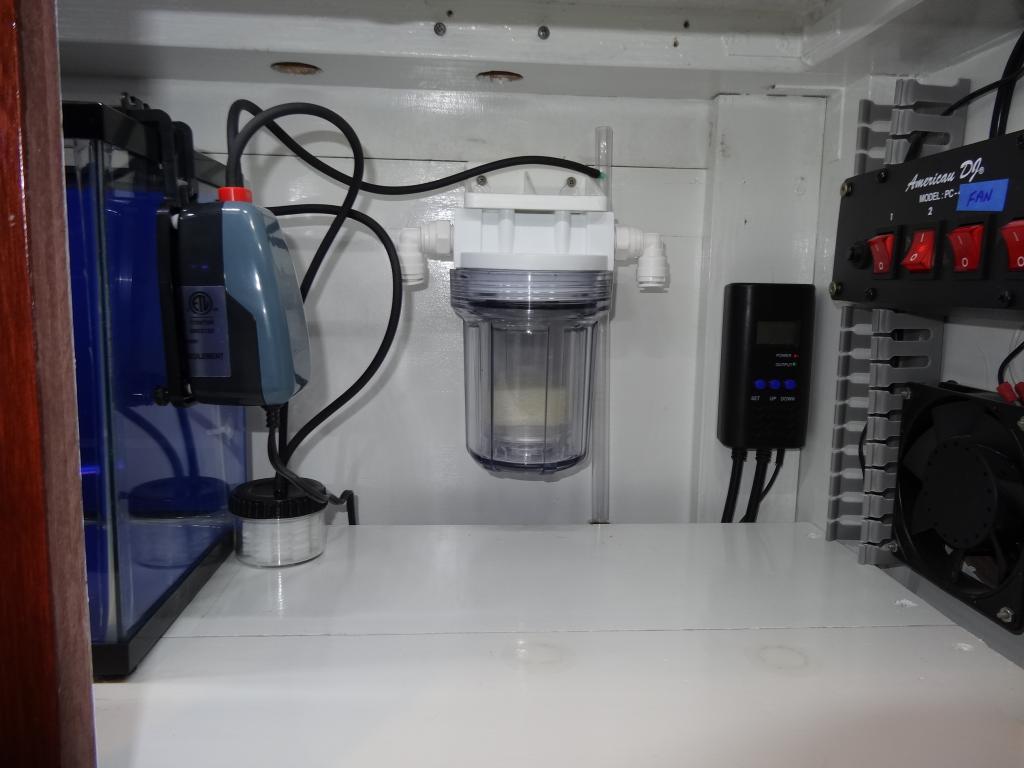 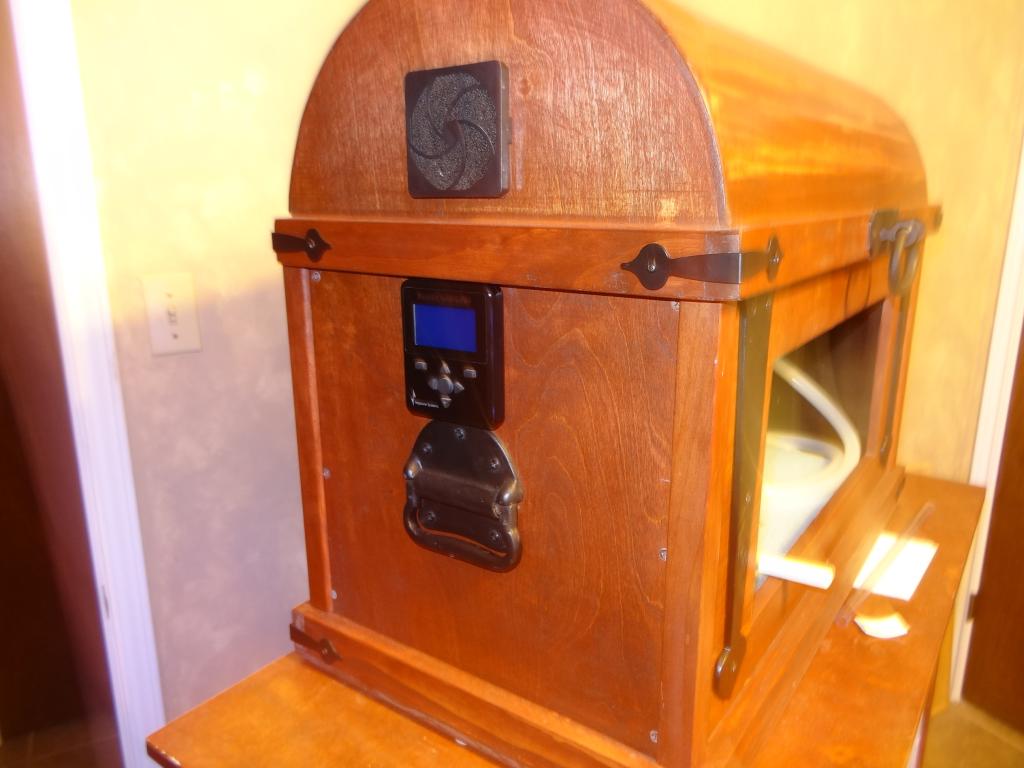 Oh, I am not fast, that's for sure. I sometimes get stuck on the smallest detail. I am really working on two tanks at once (I have a 140 too) and neither of them is ever finished.

This is an awesome set up! Good to see something so original

Wow!!! Great build, lots of cool ideas and some awesome equipment... Love it!!!