I have had a year and a half old ocellaris clownfish for about three months now. She was given up at my LFS by an employee for being really aggressive. She was originally in a completely empty QT tank where she was supposed to help other fish become more confident, but when I got her I put her in an established 20 gallon high with lots of rock and some corals.

She is mean as hell, bites me and takes the skin off, attack’s ANYTHING that I put in her tank (including rocks), and tail slaps anything she is unsure about. Yesterday I added a BTA and she has started attacking much harder, but I don’t see any hosting going on. She fans the anemone with her tail but that’s about it. The BTA is bleached and a work in progress btws

Any fish that goes in there gets attacked constantly. I really want to put other fish in my tank or even just get her a mate. Is there ANYTHING I can do to calm down this aggressive behavior?

Perfect parameters, weekly 25% water change, single fish aquarium, flukes in the past and possibly still has them. High flow and high filtration environment. 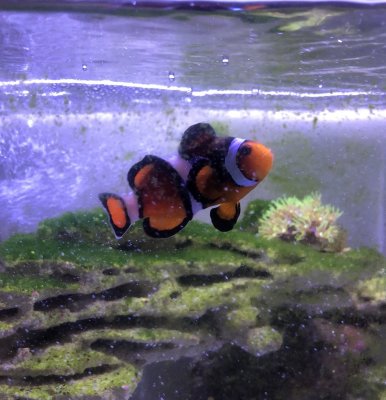 Clowns are wired for hierarchy and aggression so it is not surprising that you sometimes come across one that is overly aggressive. One thing you might try is to hand-feed so that the fish associates your hand with something other than a threat. Good luck!

I have one that is mean as well to me and anything i put in the tank when cleaning it. She had repeatedly jumped out of the water to strike at my hand when using a Turkey baster to clean rocks. The other day, she jumped completely out id the tank by accident trying to get to my hand above the tank. I seriously thought about just leaving her there on the floor! But, i picked her back up and put her back in the tank. She was a little calmer for a day, but she's back to being evil.

But, she's only a little aggressive toward other fish since all the fish do get along well. So, i guess she had an upside... but when she turns on my peaceful fish, she'll be a goner!