Based on the Fritzing designs for Reef-PI, I’ve developed some PCB designs to operate with the Reef-PI software. Based on an early statement from Ranjib that he wanted to have customizable Reef-PI software to support a wide range of environments, this has been one of the main drivers for these PCB designs. At the same time I’ve tried to minimize the size of the individual modules to fit the Raspberry PI outline.

The picture below shows a Raspberry PI with 2 functional PCBA’s stacked on top of it. 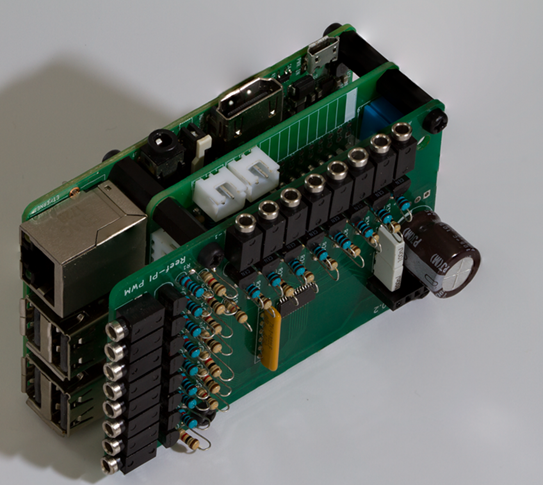 This combination with all components installed provides following functions to the Reef-PI software:

· Interface to up to 2 12V motor controllers (technically bi-directional)

· Interface to up to 2 optical ATO sensors

Top board (Reef-PI_PWM v1.0) NOT YET RELEASED DUE TO MISSING COMPONENTS

Instead of using the connectors as shown, it’s also possible to use connectors in the housing and use wiring directly to the PCB board. A disadvantage of this is that’s it’s more difficult to take the device apart with all the wiring, so in case you do, use longer wires to have some flexibility.

Presently I’m working on a 4 port ORP/pH module based on Roberto_B’s design at the same size as the PWM module, This is still in a design phase. The Reef-PI_HAT has been tested by me and others on the Reef2Reef forum. The PWM module seems to function but without having any light controllers (yet), any feedback is welcome.

The Reef-PI_HAT is simple to be assembled, even easier than using Fritzing boards since all the wiring between components is already integrated in the PCB design. The building guideline documentation also describes which components can be left out when certain functions are not required.

The Reef-PI_PWM module is more difficult to assemble as it uses one TSSOP electronic component (PCA9685) which is not available in through hole technology. Alternatively it’s possible to use an external PCA9685 module as described in Ranjib’s installation guides, just connect the board to the I2C interface of the Reef-PI_HAT or other stacked Reef-PI_<PCB> boards.

The Reef-PI_ pH board (still in design) is almost completely based on SMD components and will therefore become the most difficult one.


The PCB files and documentation can be found at: https://github.com/vandegraaf/Reef-PI_PCBs

· MCP23017 module which would allow additional Input/Output functions. The MCP23017 is presently not supported by Reef-PI, but Ranjib indicated it’s in his picture. This module together with the Reef-PI_PWM module would basically technically unlimit the number of functions to be controlled via the Reef-PI software (>1’000, depending on functions used). Not started

· And of course a 3D printable housing, still in conceptual design

· And not to forget to order my reef aquarium!

Note: This is not a commercial project, if somebody wants to assemble these boards to support other forum members, feel free.

Rating - 0%
0   0   0
I like that you built them around mostly through hole components to make it easy to assemble for beginners. Also, looks like you're in the same situation as me, fiddling around with the electronics for your reef aquarium... before you even have one.

Rating - 0%
0   0   0
Once complete, would you mind if I had these designs converted to all SMD components so they can get assembled by pick and place and reflow shop? That’s a competitive market now and prices are coming down. I would be happy to organize group buys for the finished products after testing them.
OP
W

rushbattle said:
Once complete, would you mind if I had these designs converted to all SMD components so they can get assembled by pick and place and reflow shop? That’s a competitive market now and prices are coming down. I would be happy to organize group buys for the finished products after testing them.
Click to expand...

that's OK. As written, I made these boards as no commercial project and to be shared with others. The designs are made in KiCAD which is open source as well and all files including schematics are on Github.

I hope it contributes to Ranjib's Reef-PI's success in order to have more people, also without electronic knowledge, to benefit from available components.

With SMD however main challenge will be the connectors but that's a topic on it's own. I think housing/connectors are an interesting topic to look at (salt water protection, air cooling, etc.). This has been one of the reasons to have all connectors only on 2 sides (bottom/front in my present view).

I’ll do some work on cooling, waterproofing and connectors. My company works with these issues frequently, I’ll see what they come up with.

Diamond1 said:
Is there a US based manufacturer you could recommend for these boards?
Click to expand...

I believe Osh Park is one of the most popular here in the US for PCB's.

Thanks for your design work!

BlakeL said:
I believe Osh Park is one of the most popular here in the US for PCB's.
Click to expand...

OSHPark makes good quality, US made boards. Turn around time is slow.

You can also drop in the basic specs to https://pcbshopper.com/

Is probably less expensive, but I’m not certain.

Rating - 100%
1   0   0
This looks absolutely great. I haven't played with Reef-Pi just yet but love all that is being done to further its progress. Above is a big step!
OP
W

Rating - 0%
0   0   0
Can't speak about US PCB suppliers, presently PCBWAY is my preference after JLCPCB failed to deliver a shipment via 'normal' shipment, only the stencil arrived, but no PCB's. They claimed they always send them together, claim they have been send, but have no proof. Got my money back via Paypal.

PCBWAY is more accurate and discovered a conflict in my PWM module design (JLCPCB didn't complain) which is related to some outlines in the connectors (very minimal). Don't know how to get this resolved in Kicad, but already know how to correct it in the text file. Presently just use the drill file as correct to PCBWAY, then it's ok.

Expect the missing transistors by Monday/Tuesday, they are on their way, then we can continue with the PWM module.

Rating - 0%
0   0   0
Although not a solution for all of us, it would be cool to convert a 3D printer into a PCB printer and do our own boards. Maybe some of our members with the 3D printers can give this a go and make a video. Just a thought...
R

crusso1993 said:
Although not a solution for all of us, it would be cool to convert a 3D printer into a PCB printer and do our own boards. Maybe some of our members with the 3D printers can give this a go and make a video. Just a thought...
Click to expand...

This would be super cool to work out details through prototyping. It would allow rapid iterations for testing which would really speed development time. No idea on the cost though. It might still be cheaper to go with a very cheap PCB manufacturer knowing that they are prototypes and super high quality is not needed.

My personal vision is to end up with professionally manufactured PCBs populated by professional assemblers (with pick and place and reflow process for low cost) conformal coated for longevity. As noted above that will be challenging for connectors and cooling.