Hey, all! So after about a years experience with an IM 20g peninsula, I’ve decided to get a larger tank. I ended up with a slightly used Reefer 350 from a local guy who had it for about 3 months. It came with an Apex system so that’s really what sold me. I’m on the 2nd week of a cycle so here’s some progress pics: 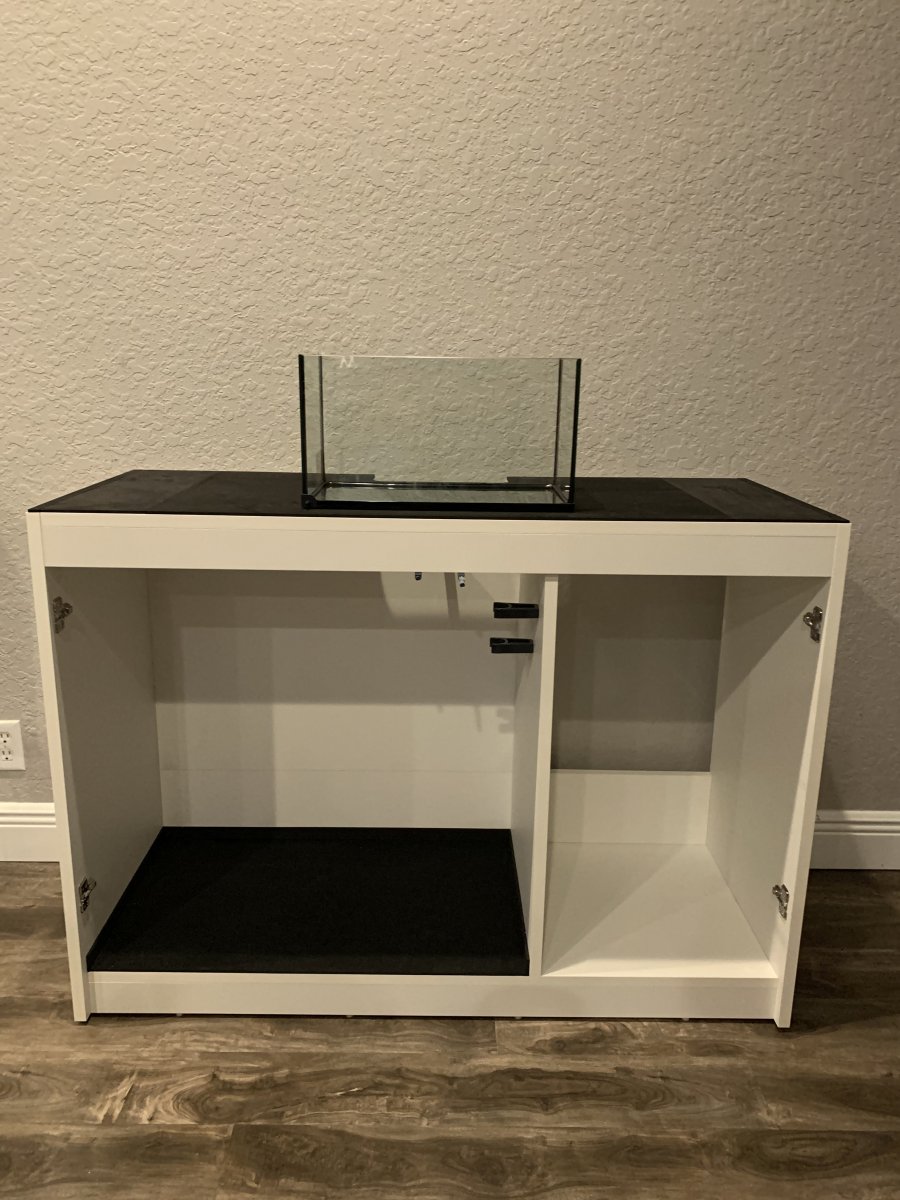 Finally got the tank set and installed led lights that turn on with a magnetic switch so as the doors open the lights come on: 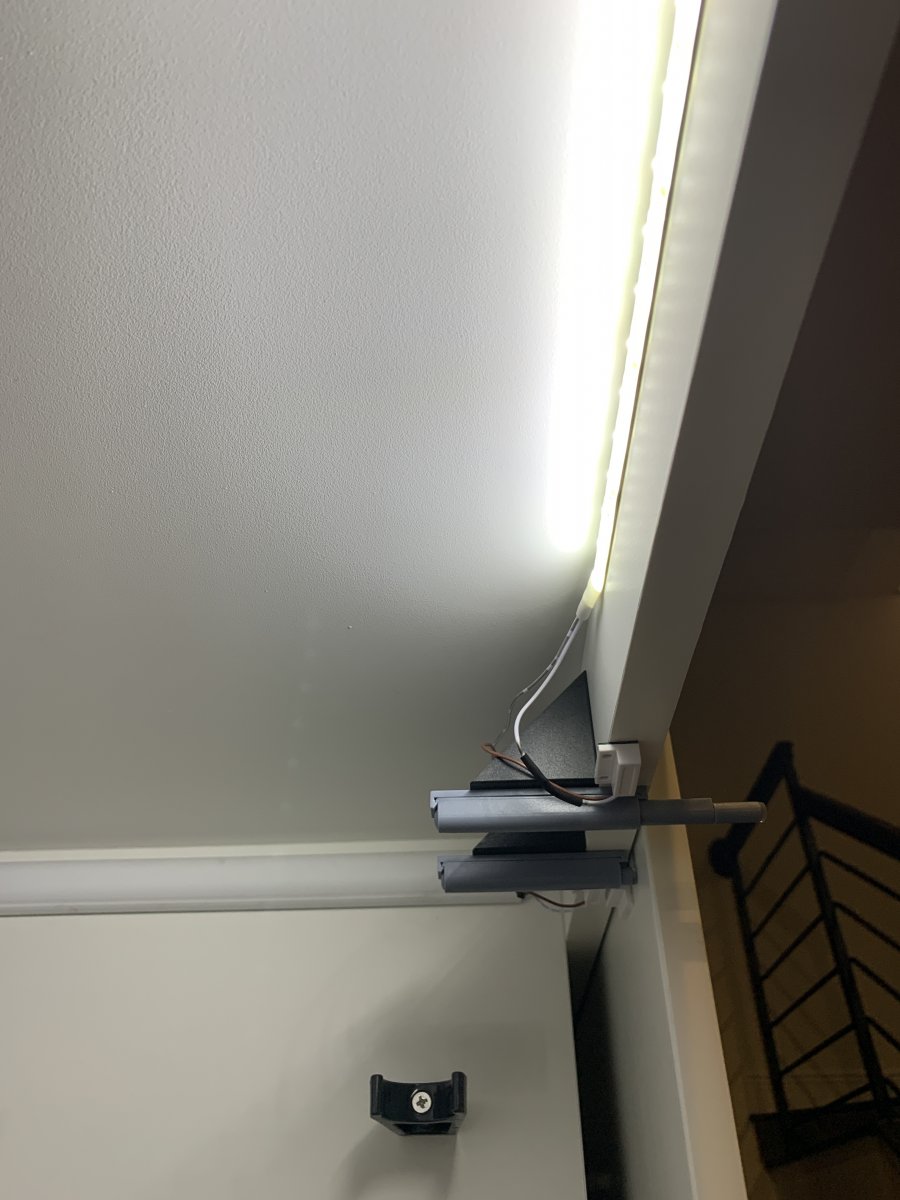 Also made some brackets for the power strip using aluminum and stainless hardware: 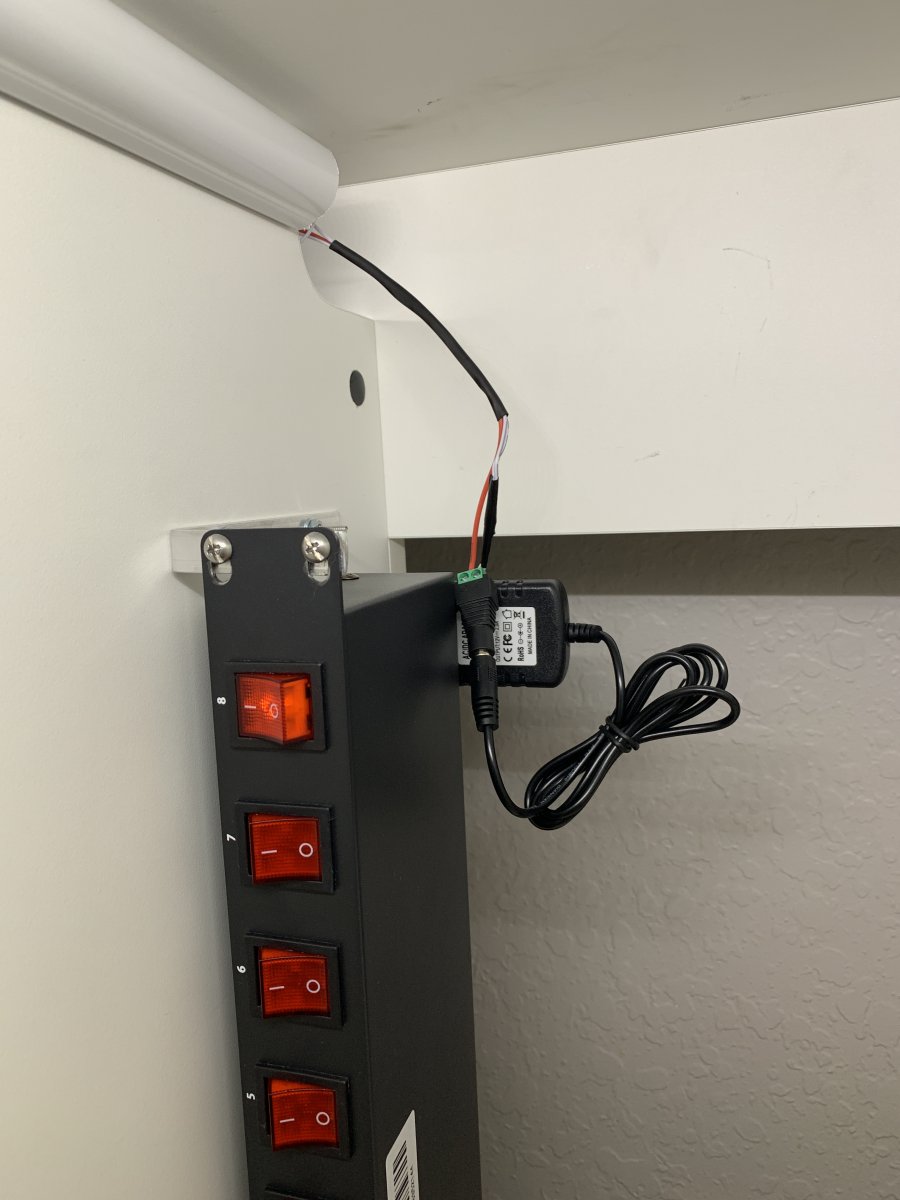 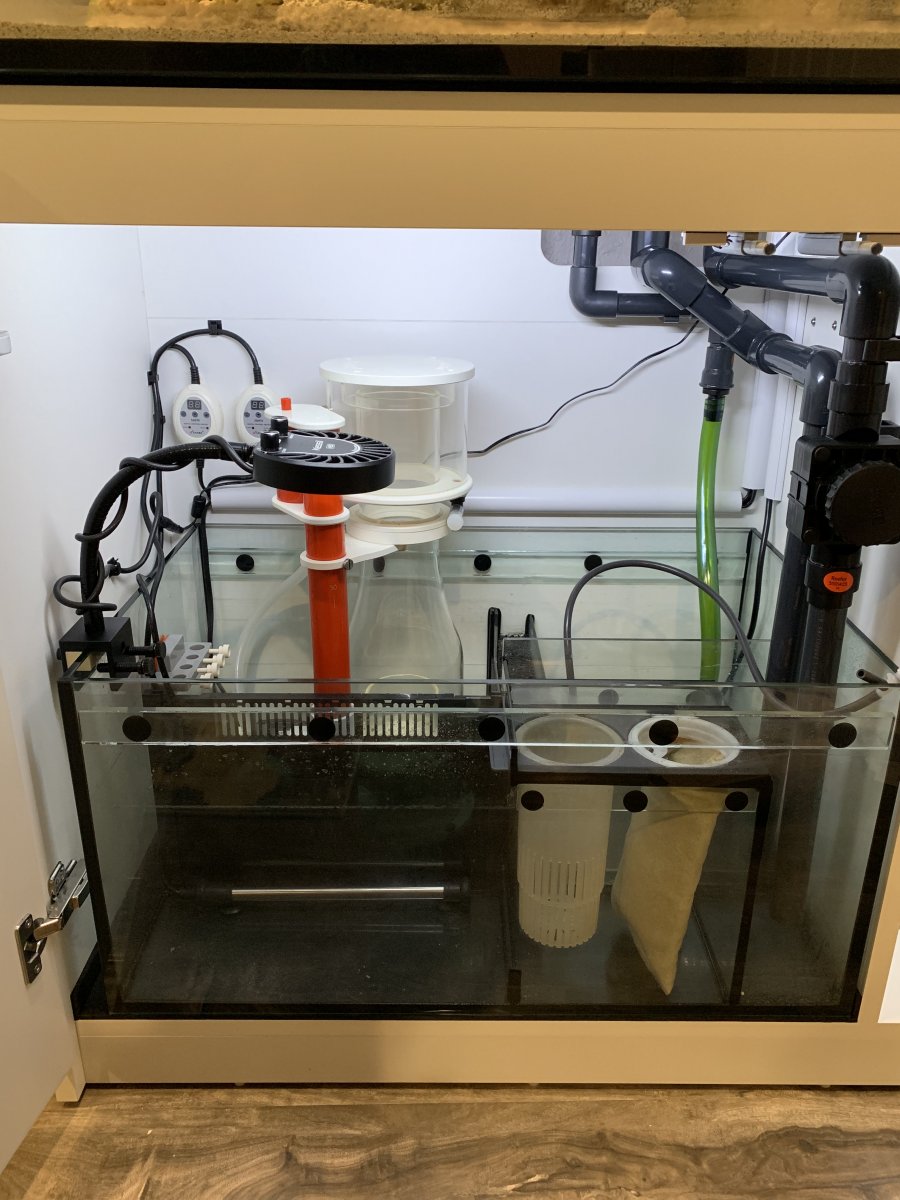 For lighting I’m using the Ocean Revive T247 I had on the 20g and I purchased another one. I also purchased Orphek’s universal mounts and created new adapter brackets to mount the lights onto the Orphek arms: 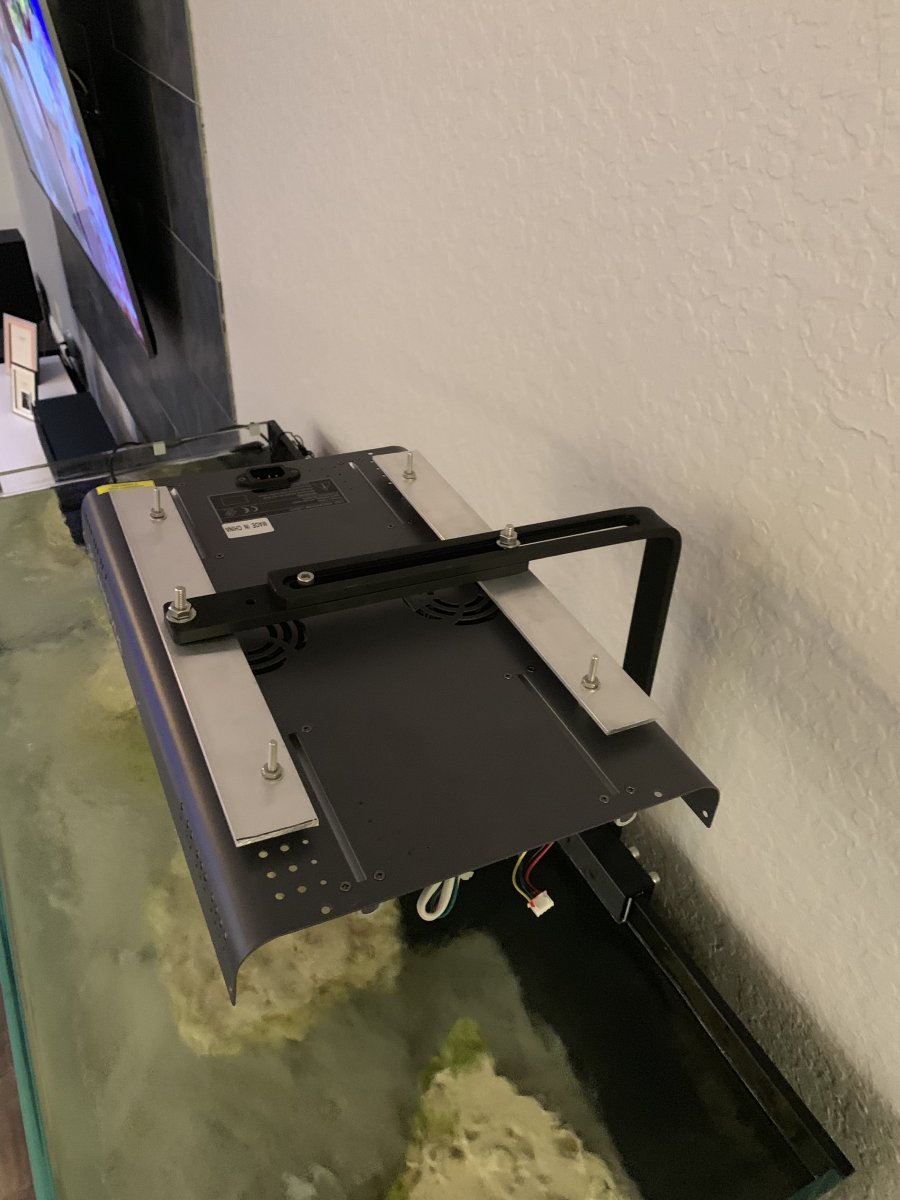 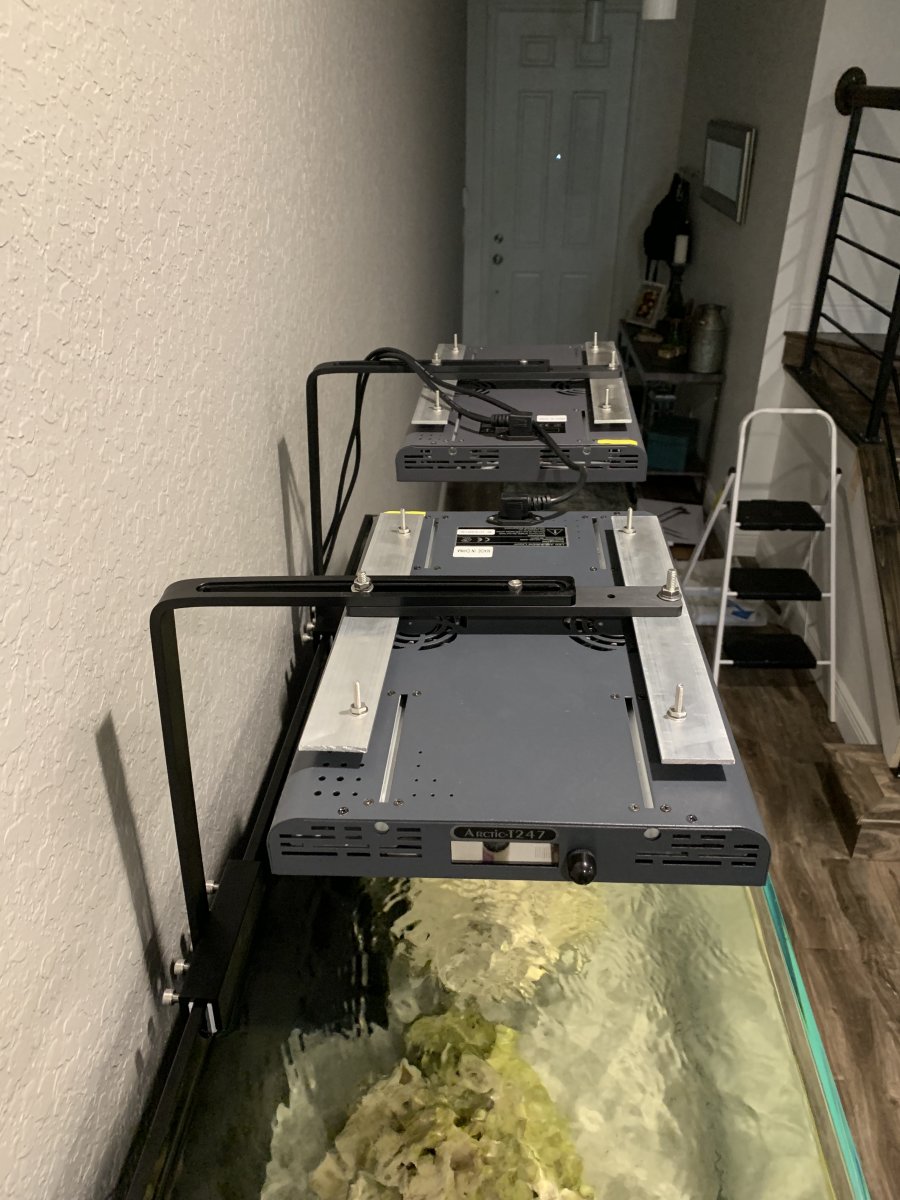 So as I said it’s on the 2nd week of the cycle. I started it last week with Turbo Fritz and I’ve been dosing ammonia. The ammonia falls to 0ppt within 24hrs so I’m waiting to see the nitrates shoot up.

Here are some shots of the current state: 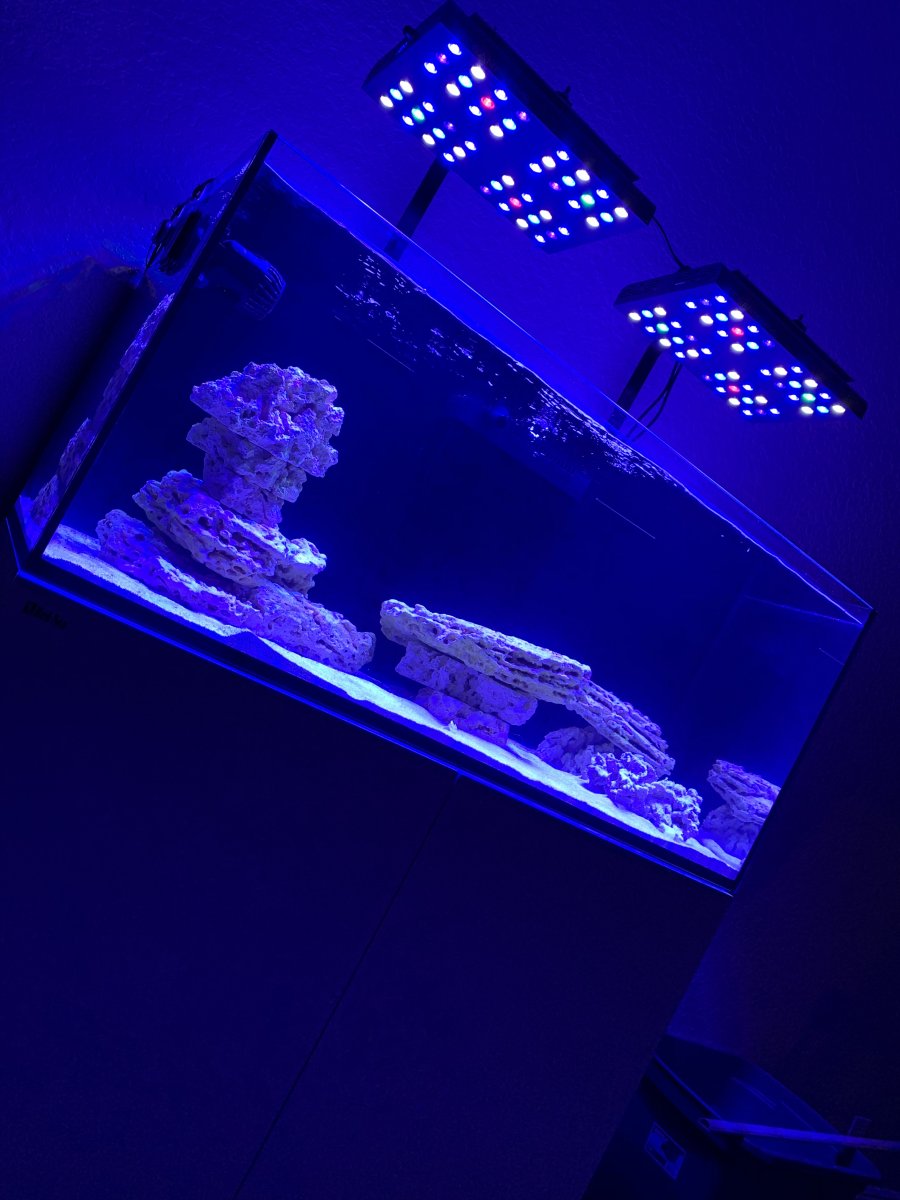 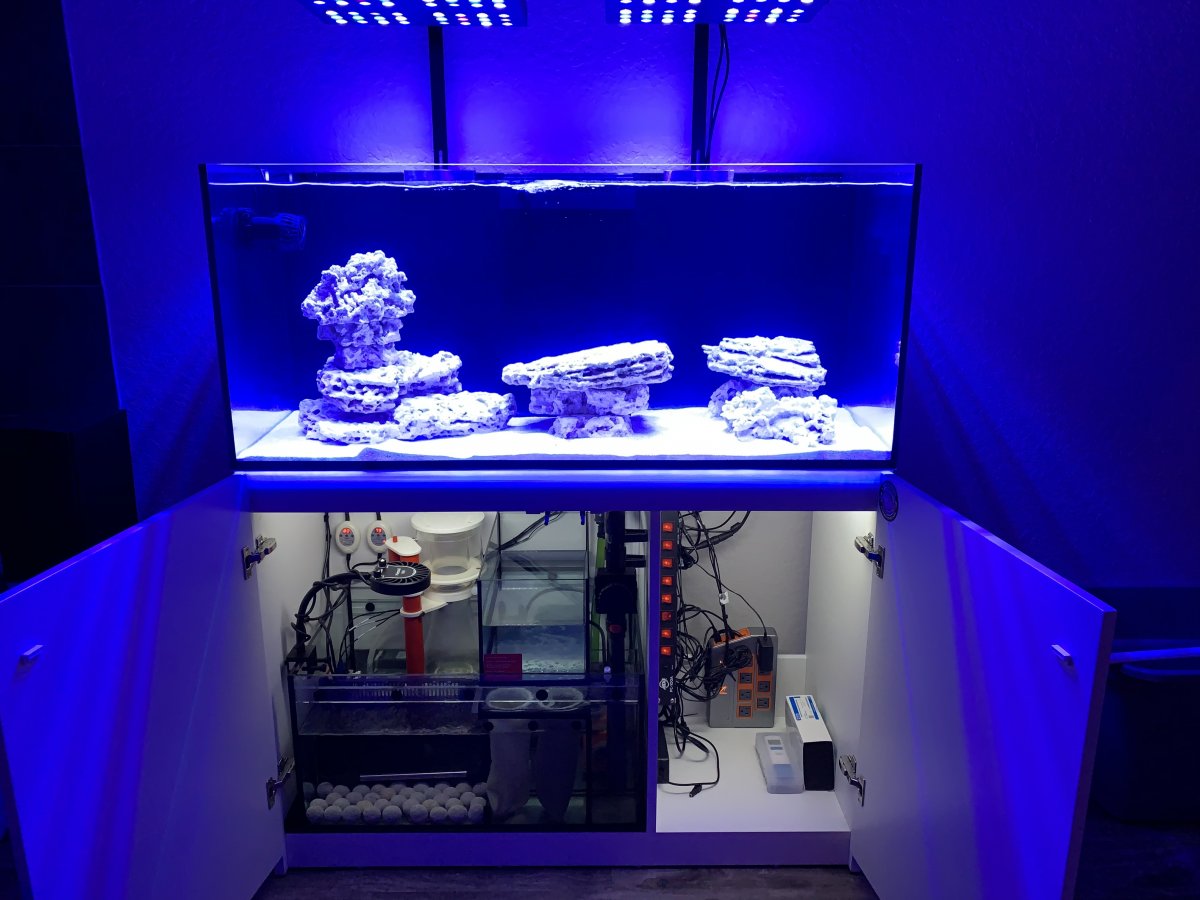 Love the idea on the cabinet lighting! Just need to clean up the wires, and you have yourself a clean looking setup!
OP

Thanks! Yeah I haven’t dared to try cleaning up the right side of the cabinet yet.. waiting on some more cords and stuff - need to connect the heaters to the E82 and get an extension for the lights.

Nitrates are between 25 and 50 using Salifert.. planning on a water change this weekend then adding in a pair of clowns.
OP

Did the first water change yesterday using RO and Red Sea Coral Pro Salt. Changed out 10 gallons and also added in the first livestock! We got:

The foxface and tang started picking at the rocks algae nearly right away but they have yet to touch the nori on the clip. Hopefully they’ll get used to it. 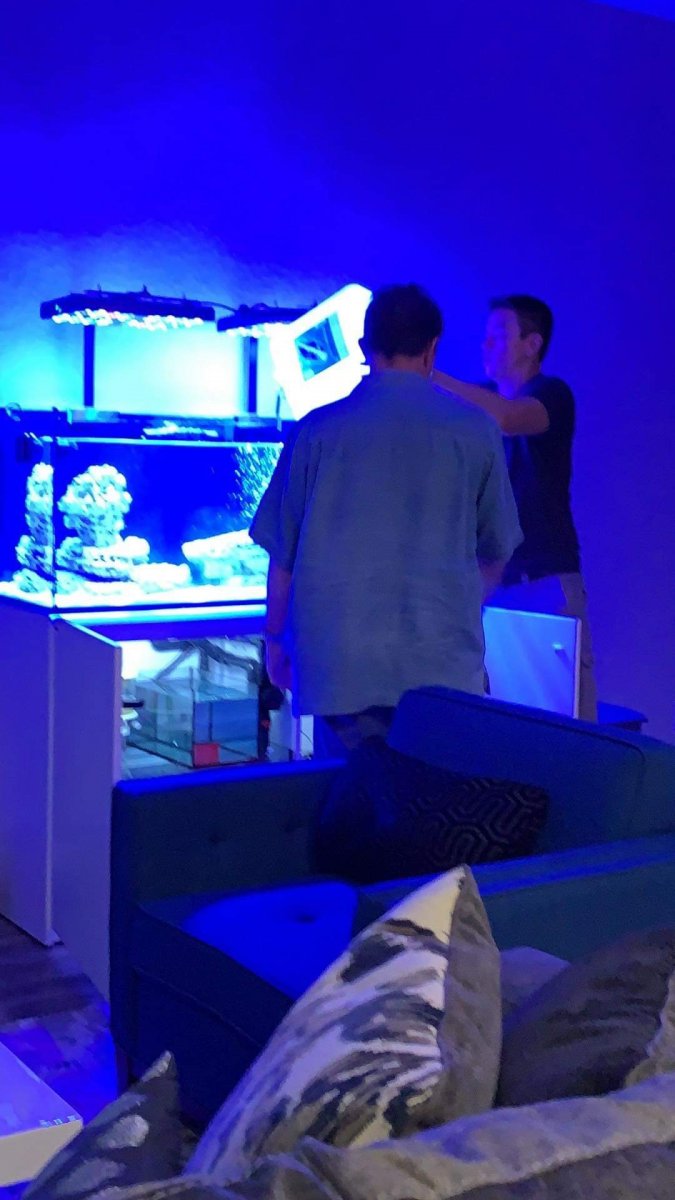 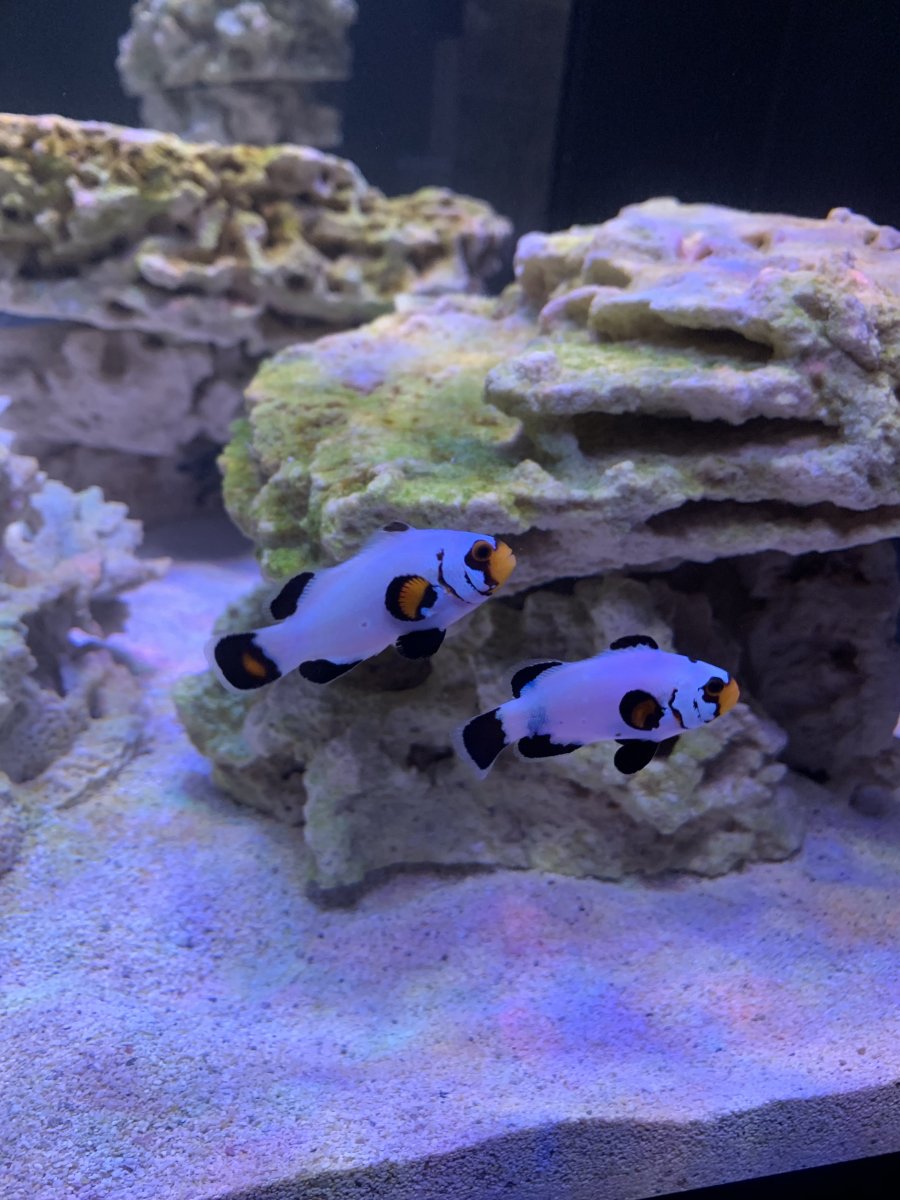 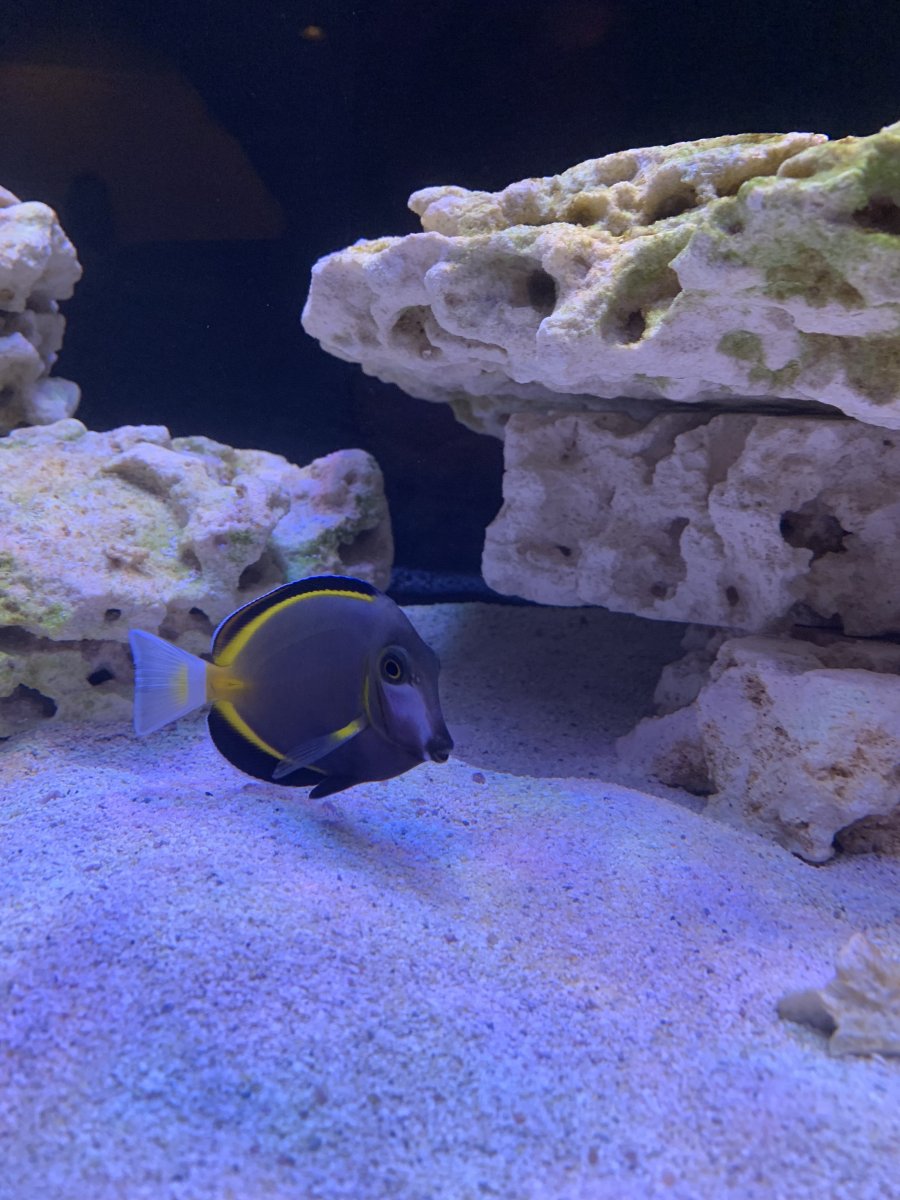 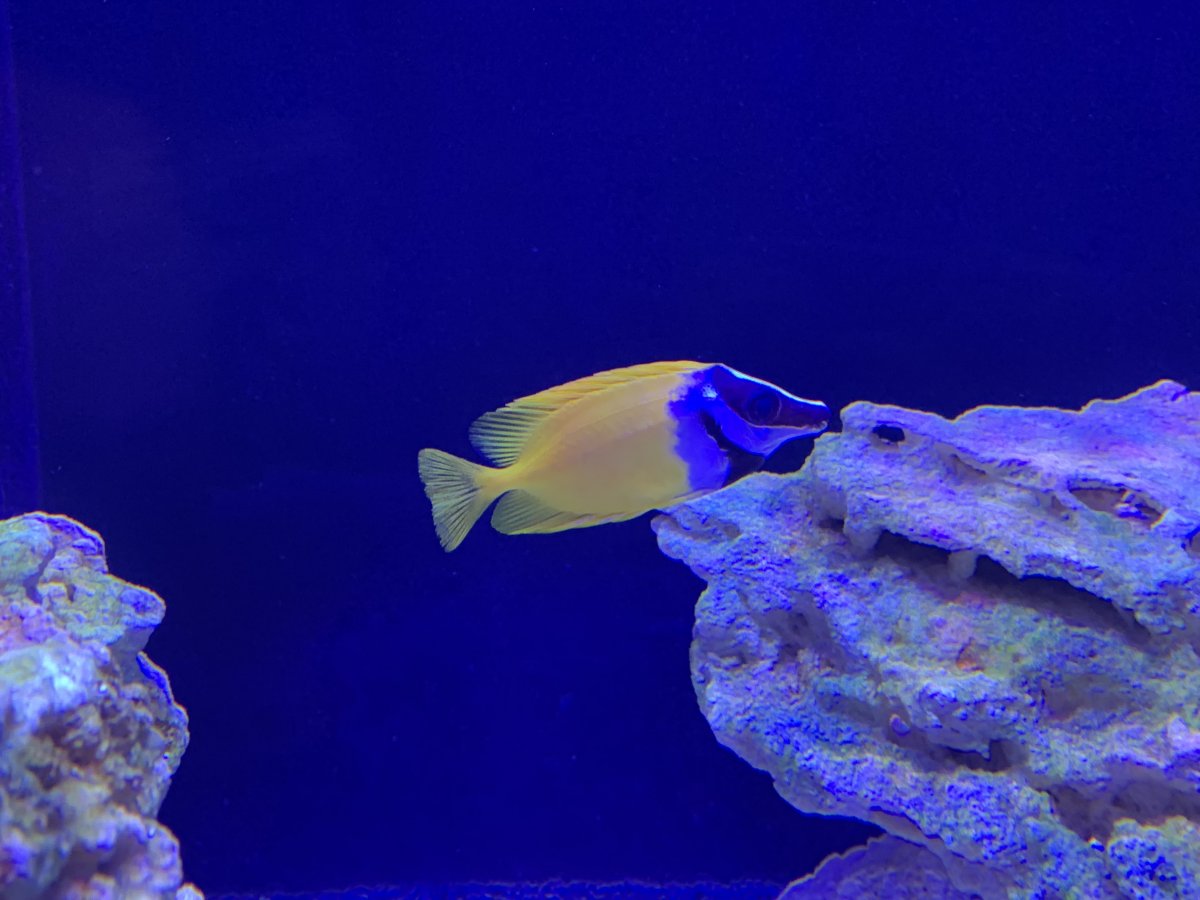 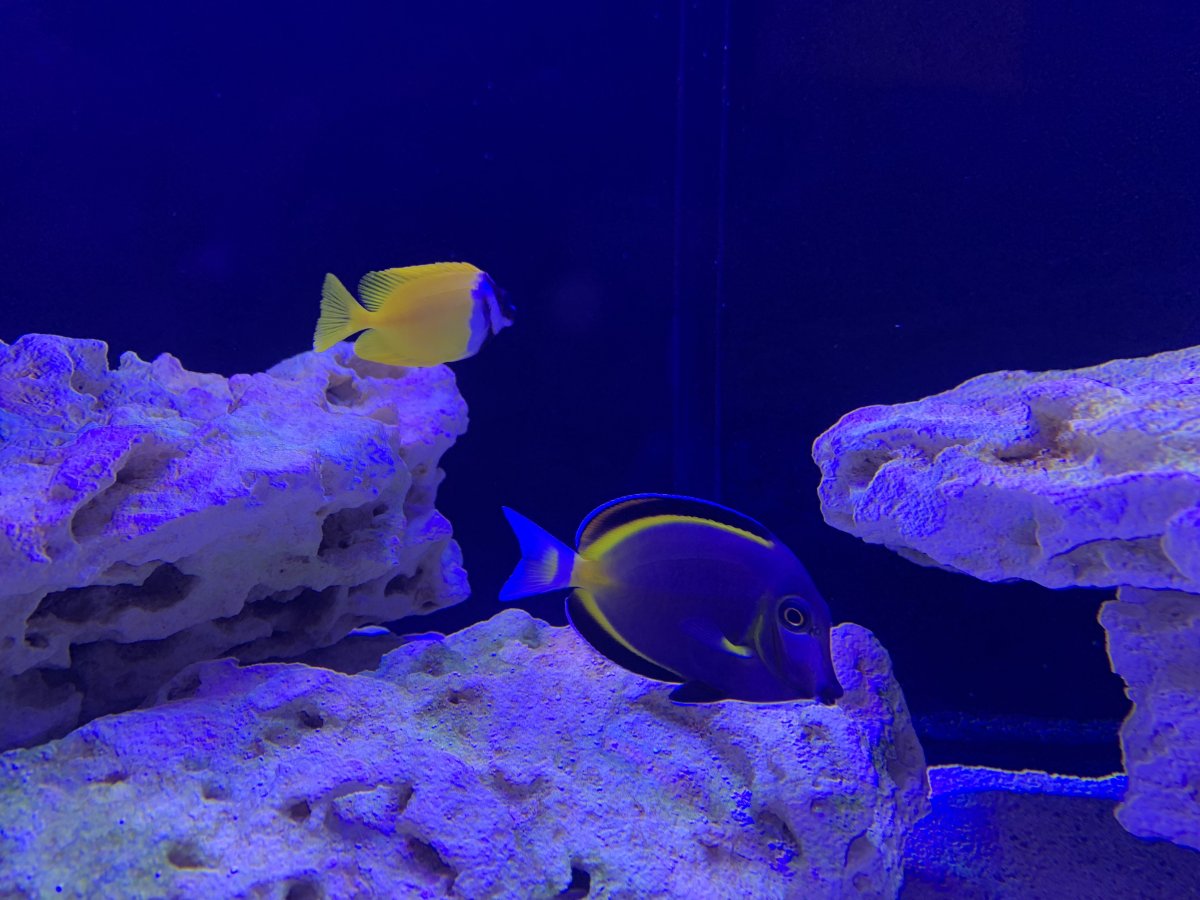 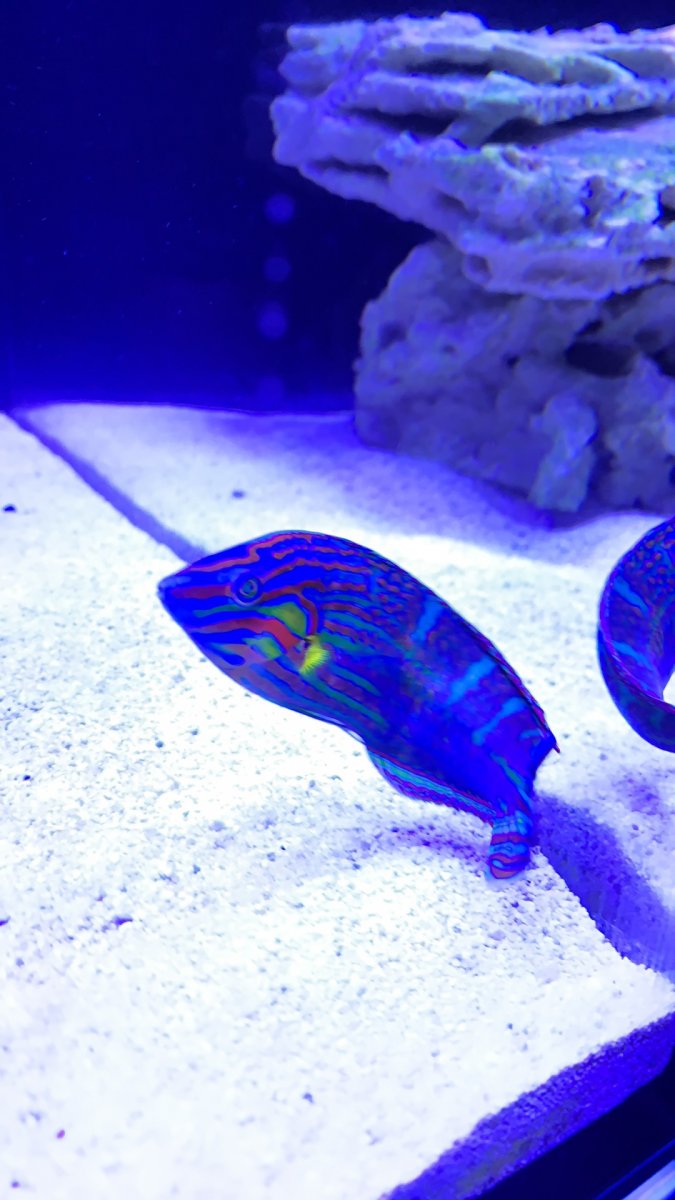 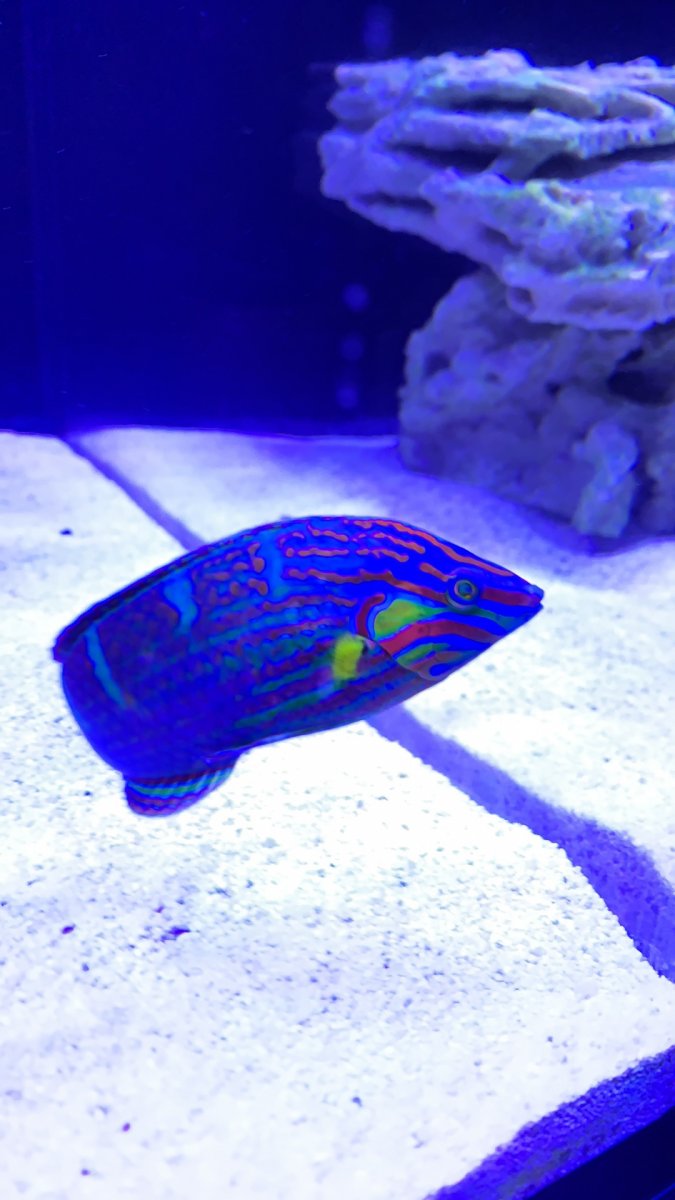 I installed some blue and UV led for a moonlight effect and they come on an hour before the lights come on (built-in timers) and go off around midnight - Apex controlled. Excuse the poor quality iPhone photo. 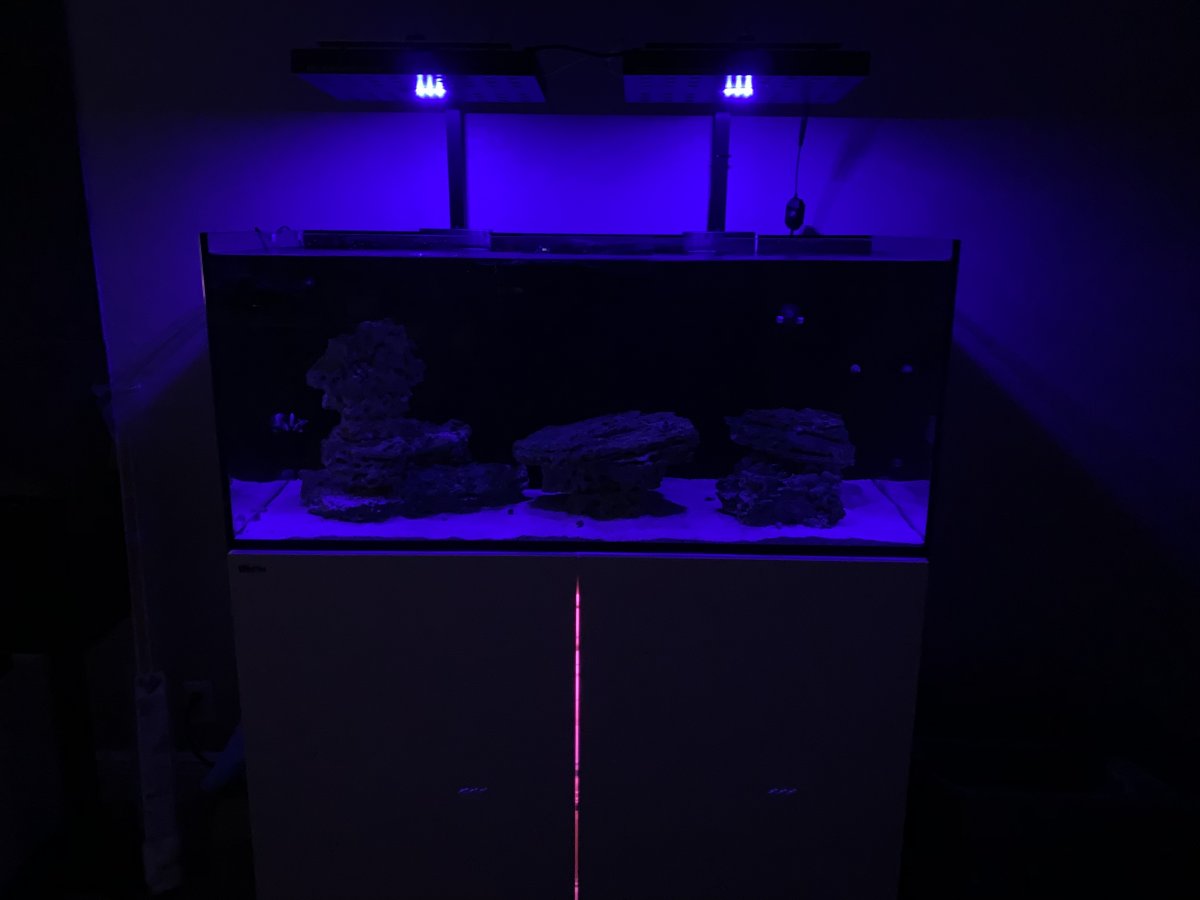 Powder brown now in a breeder - he wasn’t playing nice. 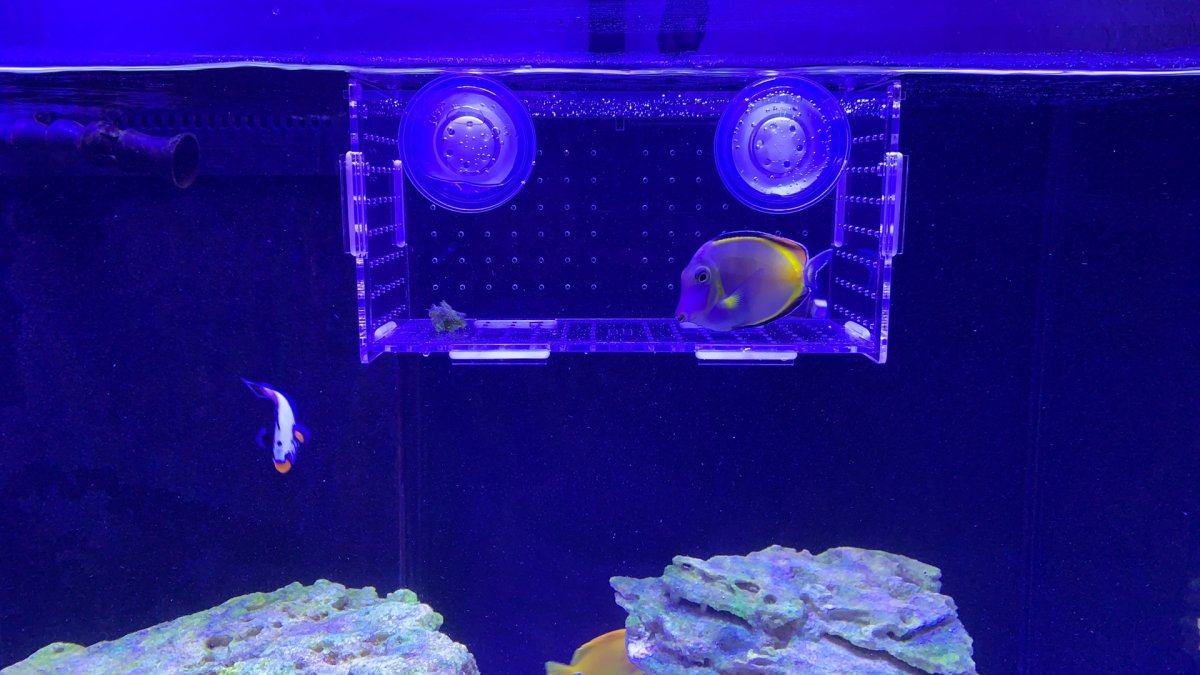 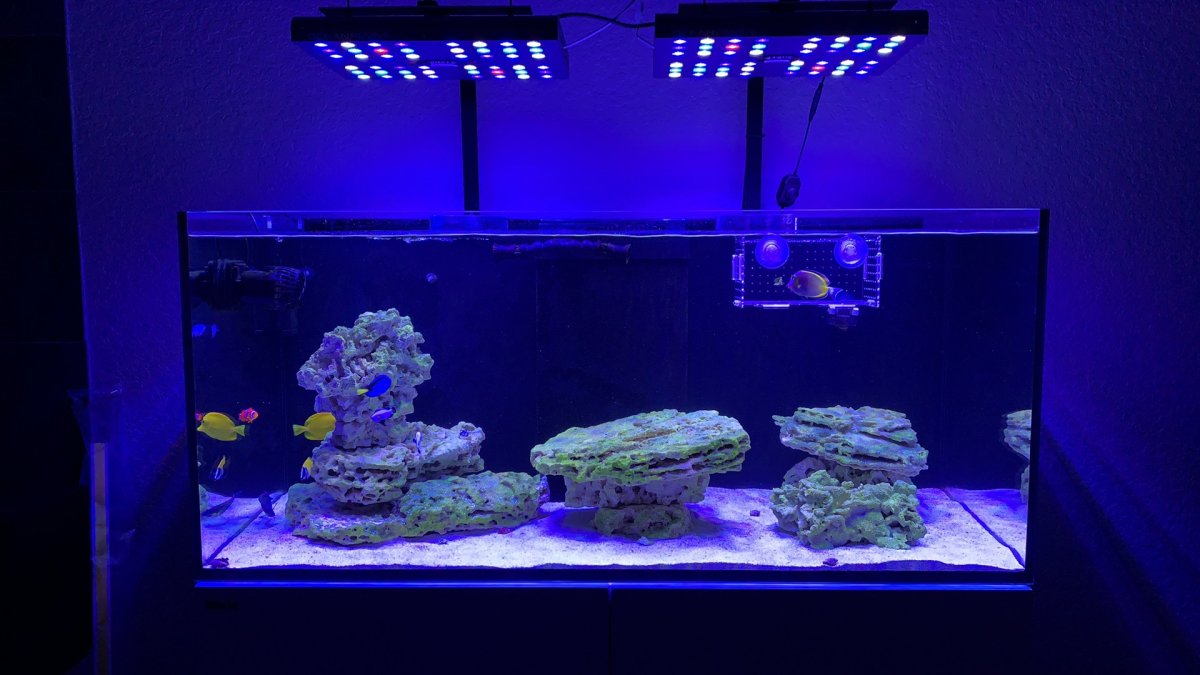 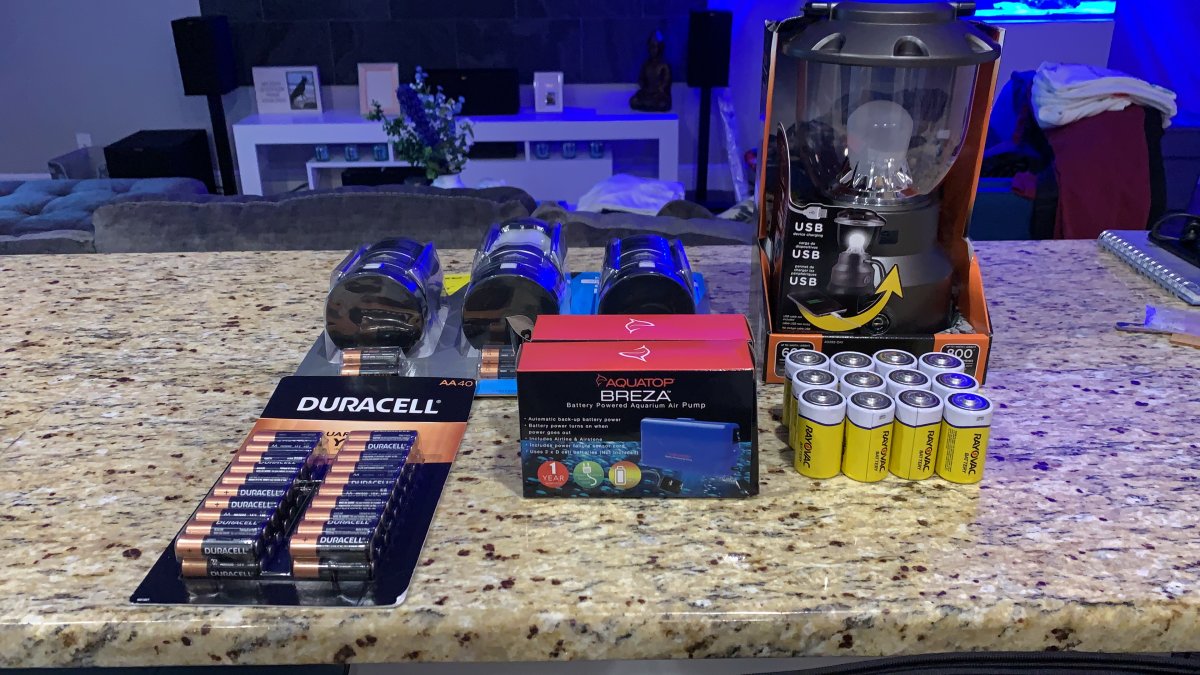 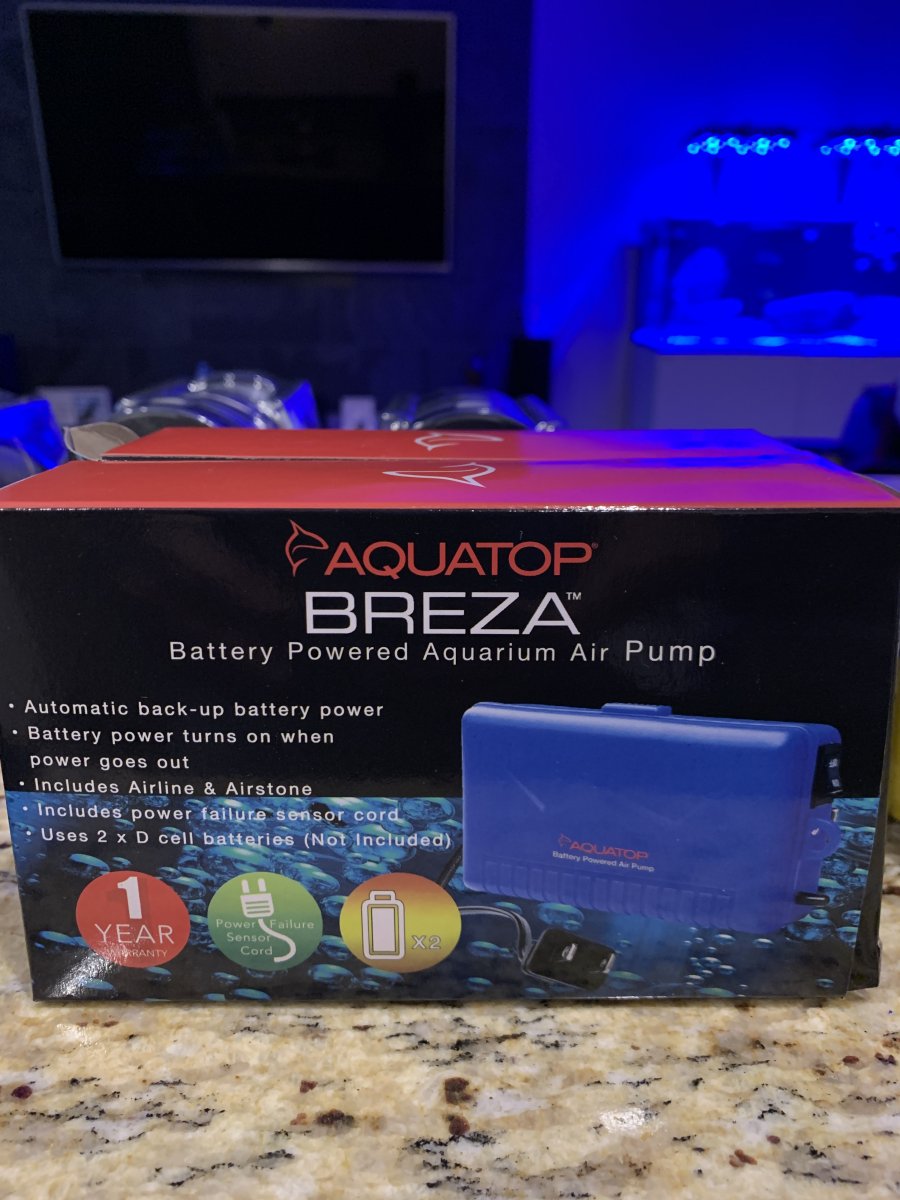 Powder brown went back into general population.. let’s see how this goes. Hopefully no one gets shanked. 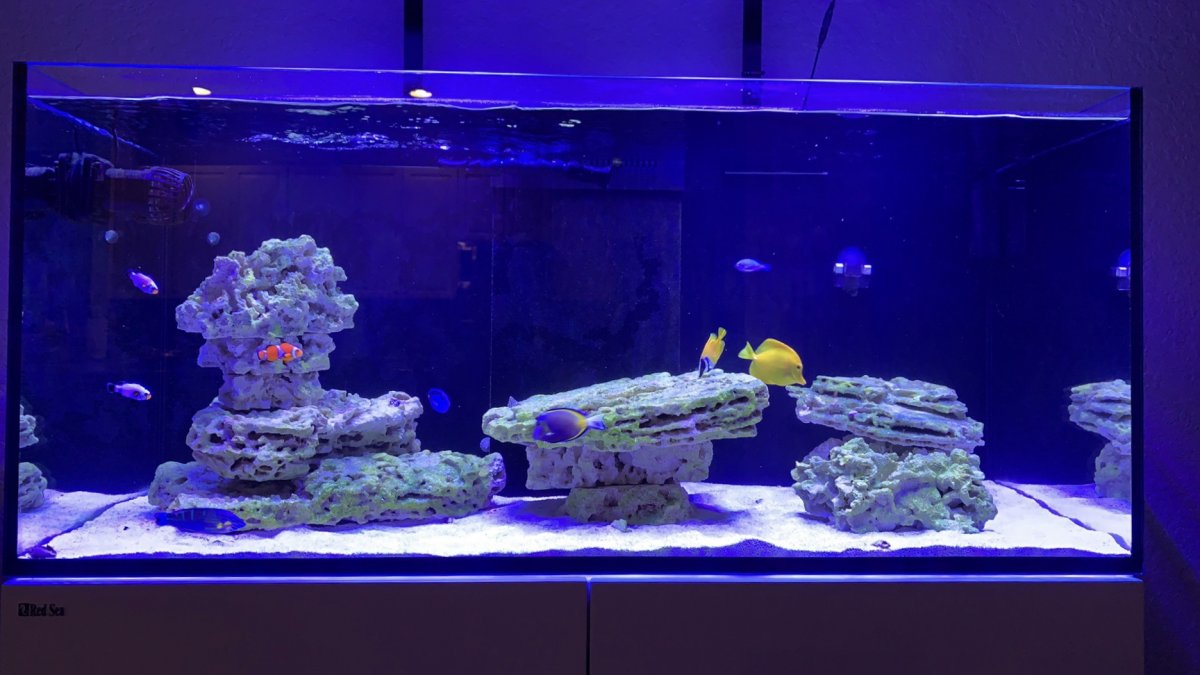 Got a Coral Beauty today.. and also put in some test coral. It’s sooner than I’d like but let’s see how it goes. 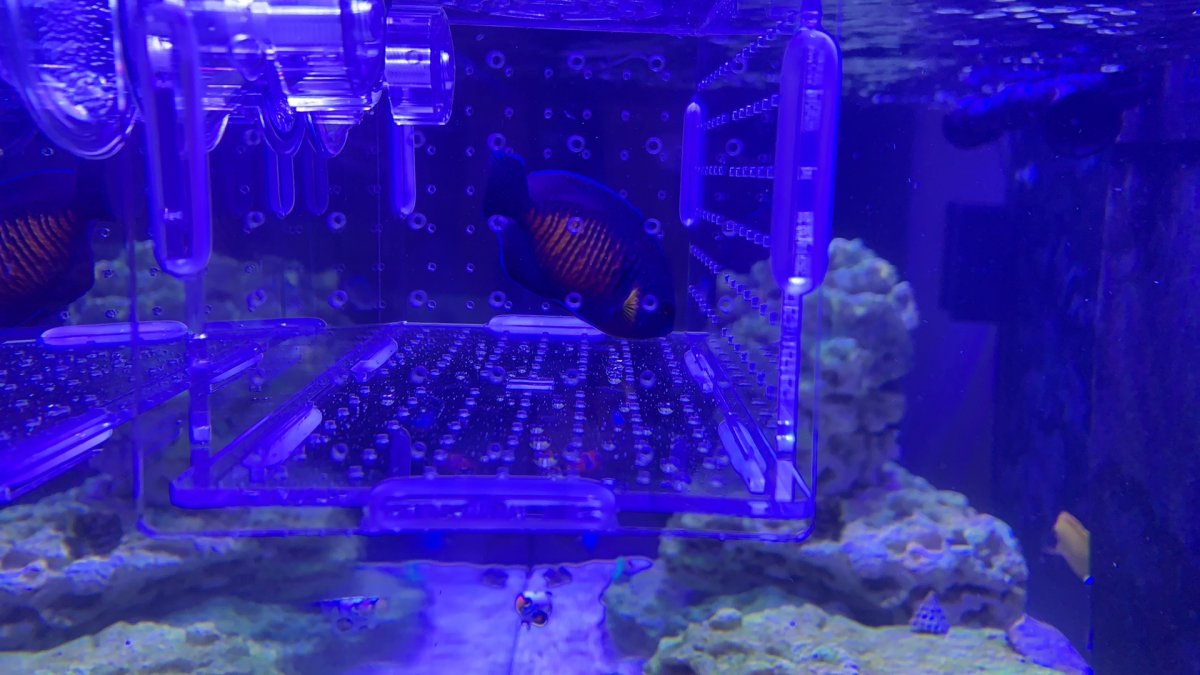 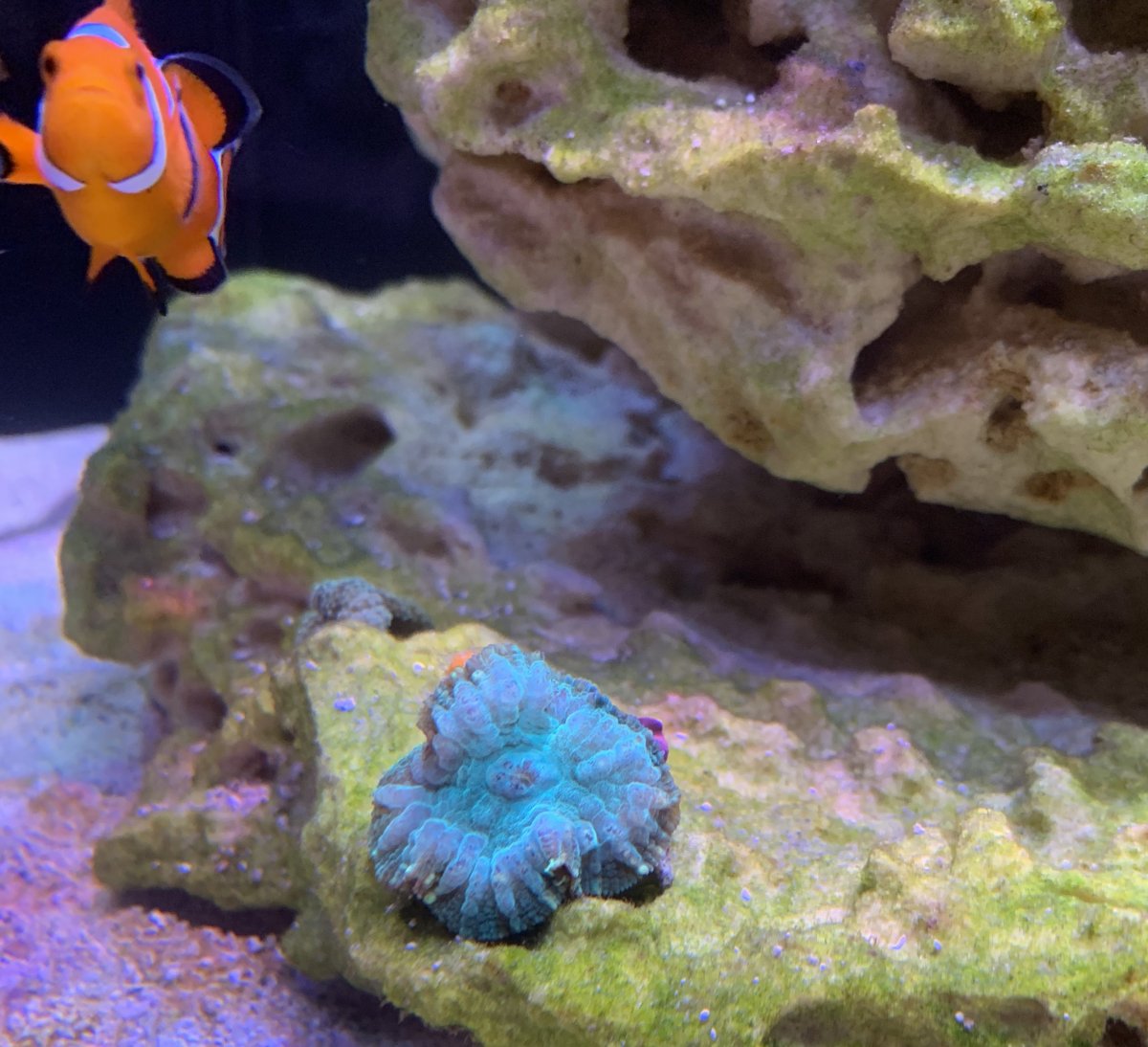 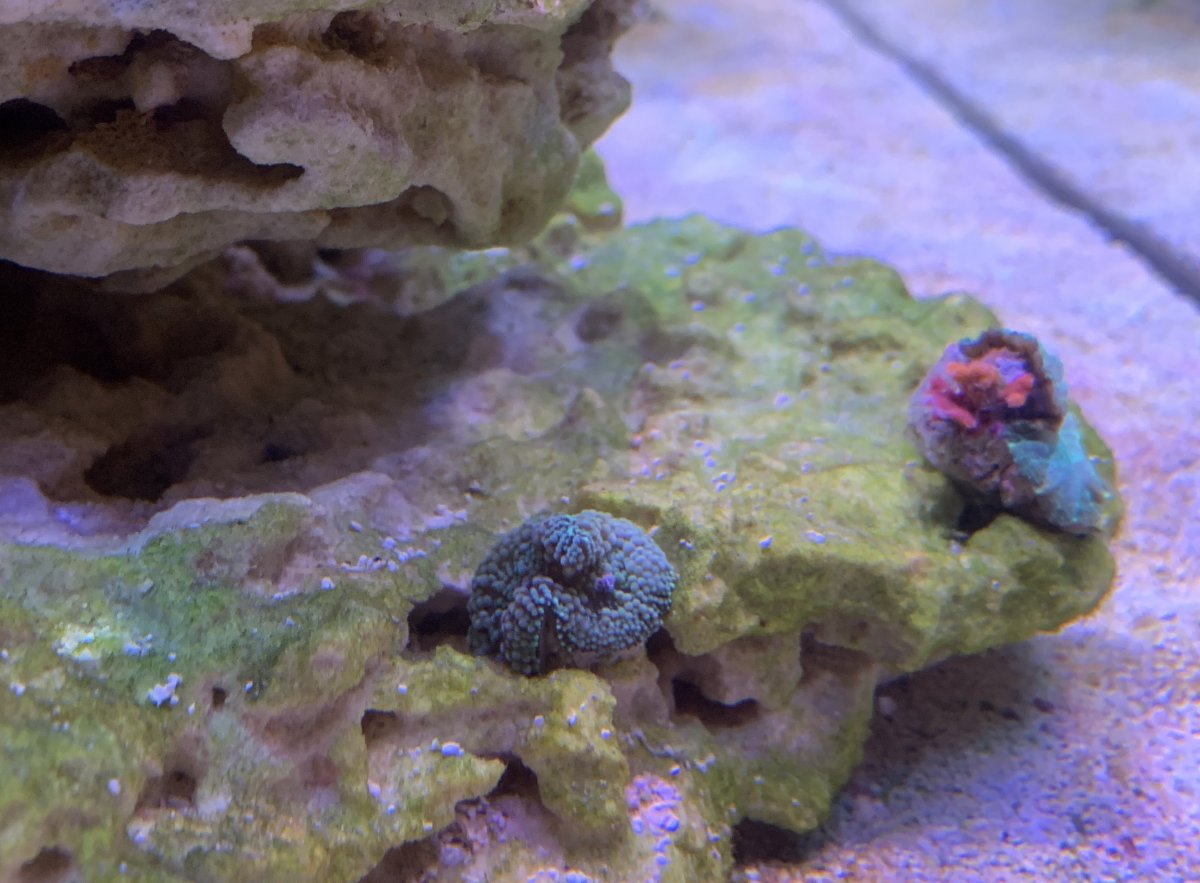 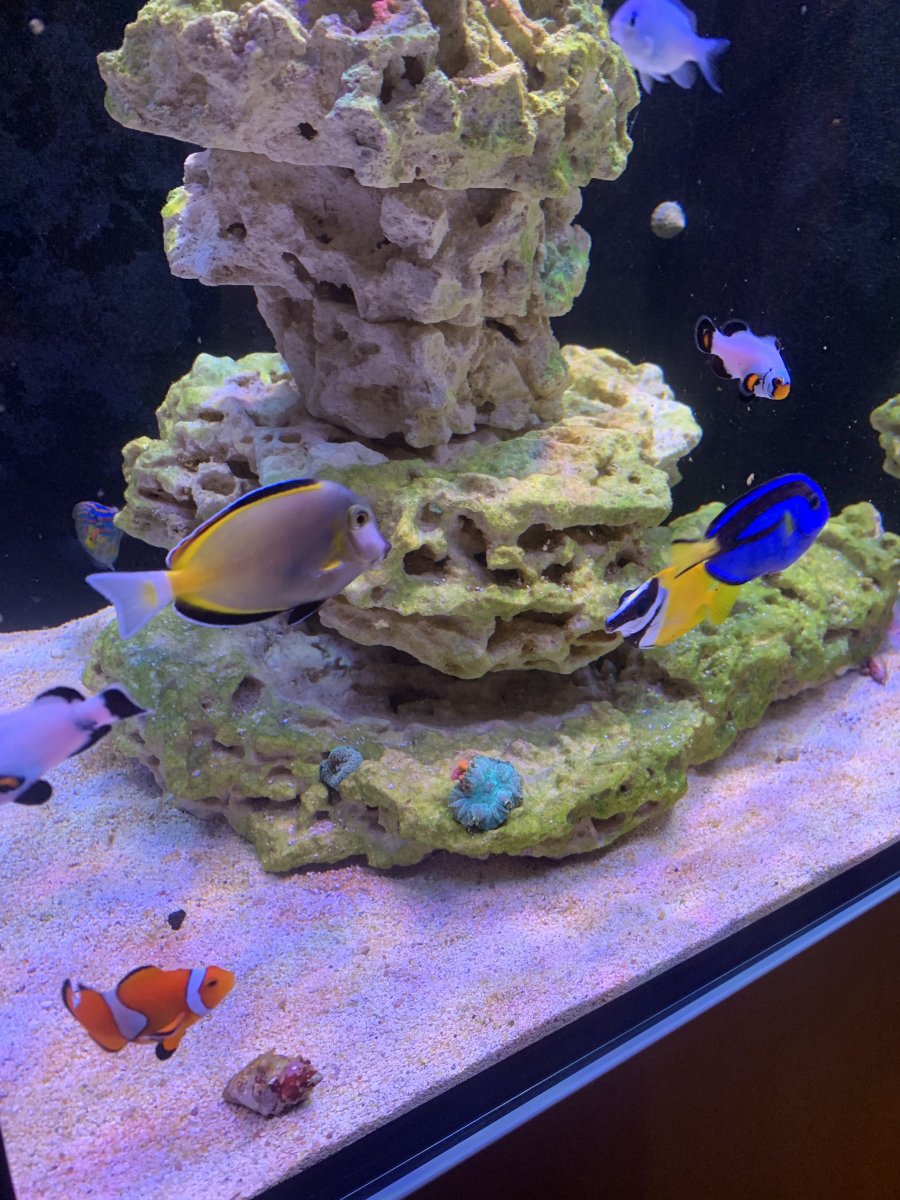 looks awesome! what lights and switch did you get? I'm setting up a reefer 350 too and am starting to look into cabinet lighting.
J

phatduckk said:
looks awesome! what lights and switch did you get? I'm setting up a reefer 350 too and am starting to look into cabinet lighting.
Click to expand...

Thanks! The cabinet lights are generic white led strips from amazon with magnetic switches also purchased from amazon. They were easy to wire and are held in by 3m double sided tape.

My main lights are OceanRevive T247. They’re pretty much a Chinese black box with built in timers. Blue channel and white channel each with their own intensity and timer settings. I tried to get them working with the Apex but the controller I bought isn’t working. They’re running off their internal timers but I added moonlight (blue and uv led) to them and those are powered separately and timed off the Apex.