Introduction:
Hey All
Been an avid fish keeper for over 25 years, there isn't much in freshwater which I have not kept and I've dabbled in marine in the past.
My prior builds all crashed due to power failures and or going a bit too hard to fast. ( fast bioload additions without sufficient nutrient export )

This new build is also a Quit aid, as I have been wanting to give up smoking for a while now and I was given the idea to funnel funds into something I would love more than smoking.. So Reef tank it is.
I will be slowly ramping this system up over the course of a few months, Currently the system has been running for 2 months.

The initial Tank for this system is an old curved front tank. Its 1m long by 45 high and 45 deep. This was a pure freshwater setup and I will be converting it to run off a sump.
All Weirs were DYI and for mega cheap..

System Objectives:
Large amounts of SPS Coral, inverts, and anemones, with a small bioload of fish.

System Type:
Currently system is a mixed reef, SPS and Softies are Dominant.

That is a wonderful setup
OP

So, this tank has been wet and running since August, so I will be bringing everyone up to date with how it is.

Firstly, this is a revamp of a spare tank I had and just wanted to see what I could do.
I stand is home made using some pine 2x4 and a few sheets of laminated chipboard.


Stand was the first thing to be build. I also found that it was a heck of a lot cheaper to buy a rigid hard plastic stormwater pit, and cut it into 4 pieces.. which gave me a total of 4 corner weirs. Which I then used an angle grinder to kit the teeth into.. Silicone these into place and their done.

This gave me the added bonus of cutting a hole in each weir and installing my wavemakers inside the weir, this gives the tank a wave effect, like a wave box but it over flows as well.

I drilled 2 holes in the rear of the tank on each end. In the pictures attached you can see where I used a spare weir as a tester for fitting and powerhead placement..

Decided I wanted to paint the tank the same colour as the stand so it matched more and it made the reef on the inside just pop.

As for the hardscape I had some old clean dry rock around, and decided to build at best a negative space scape. Or at least something that was not a wall and to be floating. These will then have live rock stacked and locked into place with ontop. 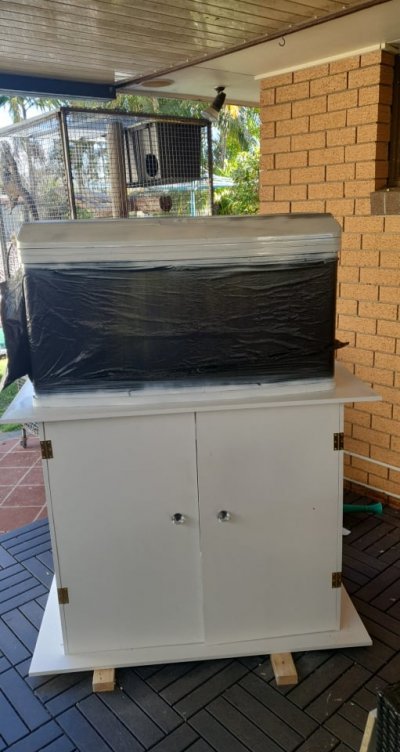 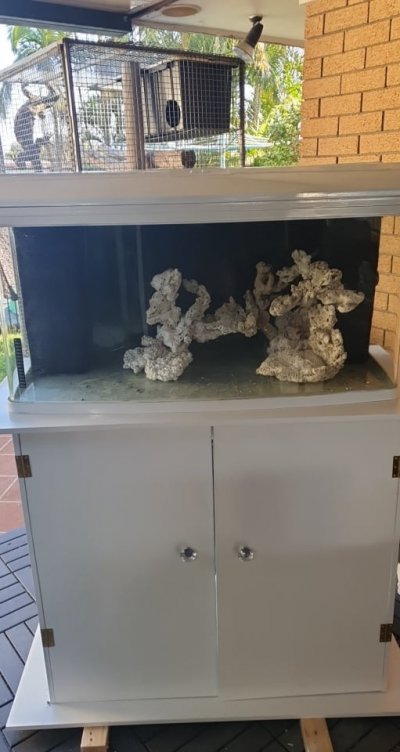 This is the Weir construction.

Photos attached, one will show the wave maker in position inside the weir with a hole cut.

Since the storm water pits are a perfect square, you can choose to have a single large weir, or smaller ones. 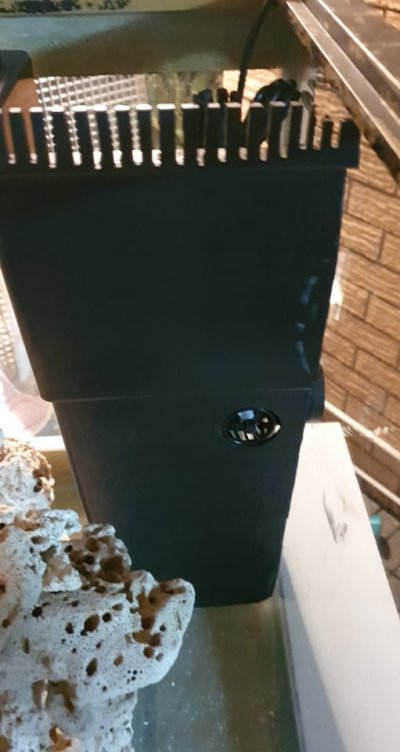 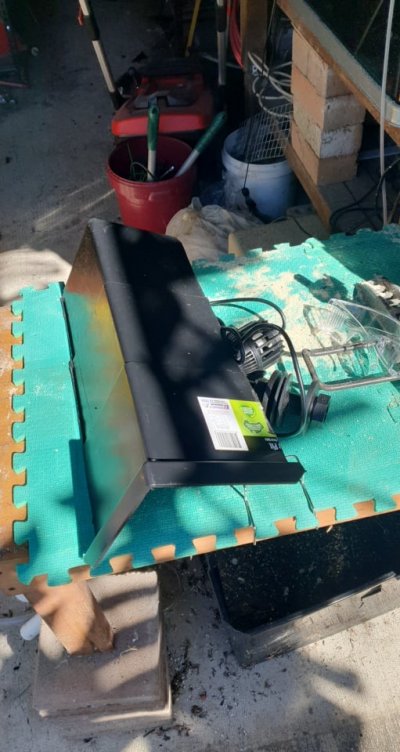 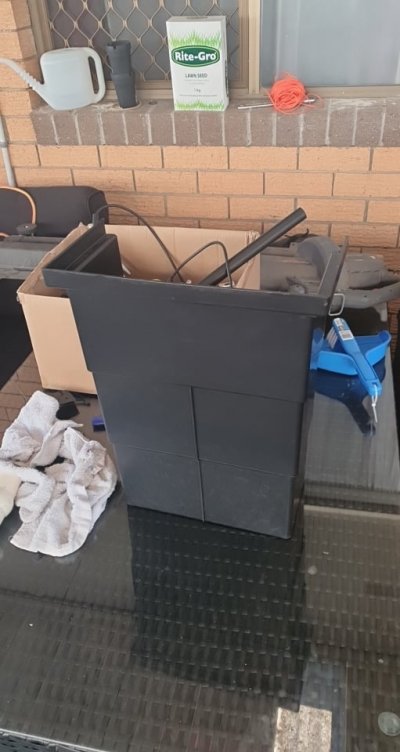 Update: We are Wet

Filled with NSW harvested from the ocean

Obviously.. Went Live rock shopping at one of the LFS and got 10kg of cured rock.
Had some pre-cycled bioballs from another marine tank which were used to seed this tank..

Update: First corals in, plus CUC

First few corals are in Gsp utlra, Leptos and a few Zoas. some other browned out donor frags.
Janitor hermits, Peppermint shrimp ( to clean the aphasia off the live rock. )
Anemone hermit.

QT is being treated so.. no point taking photos of a tank with green dye in it. You'll see the fish when they are in. 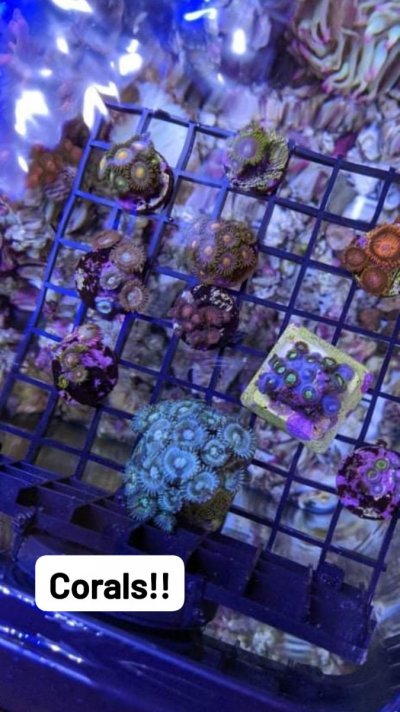 The sump is setup as refuge first, skimmer, then return/ato/dosing in the last chamber.

In the fuge is some cheeto and 2 x 25w LED grow lights.. which will more than likely be upgraded to something more stronger later.. but for the moment heading into summer here in Oz, heat mitigation is going to be a thing.
I was concerned about a bit of splash from the ATS getting onto the lights so I added in a bit of acrylic to mitigate this.

Mind you, the photos of the ATS were taken a week or so after it was installed so the growth isn't at the correct stage yet.. It still needs to grow in essentially.

Yeah, I know... cable management right.... That will be a bit of a tidy up project as I think my ATO is playing up. Its sensor is a bit.. hit and miss, even after cleaning.
I also have changed the plumbing slightly and was diverting flow to the ATS, but have now got all return water flowing over the ATS, then to the Cheeto / refuge. This work kinda messed up my cabling a bit.

Well, The tank was sitting fishless for a while and I have completed QT.

As a precaution I put 1 Coral beauty into the tank. As there is LR from the LFS in it, It may contain ich eggs.

3 days later, my fears were confirmed.. the Coral beauty had spots.
Back into QT and now the tank will sit for 3 months fishless to starve out the ich.

Be aware this is a back log update, and occurred 2.5 months ago.
OP

Update: We beat Ich, but another problem raises.

Current Parameters that matter in the DT.

I still have a Very very odd Zinc issue. My latest ICP test showed this.
Currently tracking this down. I have found some minor rust spots on a light brace. I took this out the other day and gave it a fresh coat of Anti rust paint. That Rustolium spray paint stuff.

I also potentially thought it was coming from my NSW storage barrels. I have a bad habit of leaving the pump sit in the barrel, its an old pump, but its a high end expensive one.
It could also be coming from my Nylex Sullage pipes which I am using for my plumbing, the pipes are slightly flexible, but I cannot find anything online that would support the theory that they are leeching zinc.. everywhere else online suggests something is rusting / corroding inside or above the tank..

Outside of that, the QT tank is looking good. have not seen any new cysts appear in 2 to 3 days, if this continues for another week we are good.

The Yellow Coral goby, Strawberry Dotty back, and Mandarin are fine in the DT and I cannot see any ich. This has been like this for 2 weeks now. So we can say I have successfully Starved out the ich that was in my tank.

BW / OW Hybrid Clowns We call them chocs in Australia. A pair.

And we are still currently ich free.
OP

Just some FTS pics. I am trailing some light changes, so these are comparison shots.