Build your own rock for practically free

Make your own rock 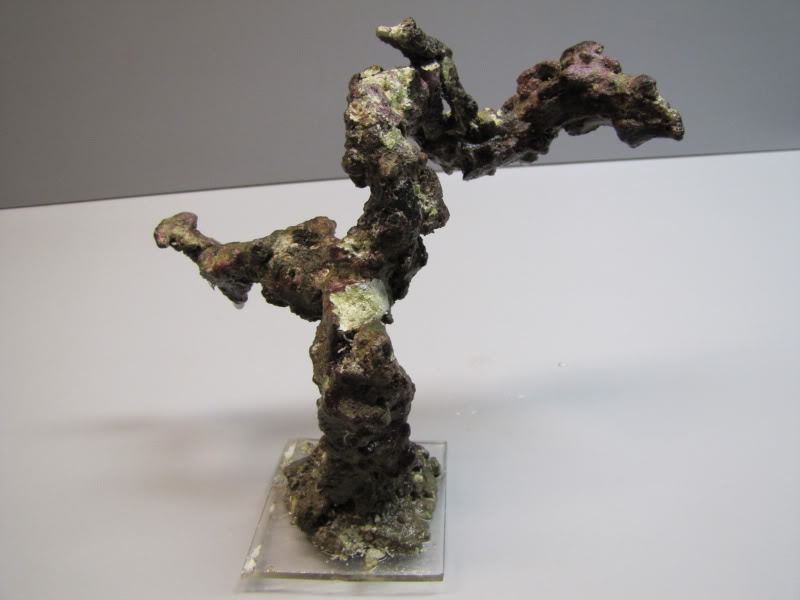 When the hobby started there was no live rock for sale, as a matter of fact, there wasn’t even dead rock for sale. We used dead, white bleached pieces of coral to decorate our tanks and we bought that in a furniture store because no one yet had salt water fish so LFSs didn't sell coral. Furniture stores sold it as a decoration. They would put a beautiful coral skeleton on a God Awful table or dresser hoping you would not see how ugly the thing was and only saw the coral.

Anyway saltwater fish became available in about 1971 but after a few years we started to convert our tanks to reef tanks and we needed rocks to secure our corals to. We also wanted our tanks to look like the real ocean and not like the inside of a furniture store.

Rock then and now was very expensive and most of the pieces are small and roundish.

Every year my wife and I would go to some tropical place to SCUBA dive and we would carry home, rocks on our lap. Today I am sure they would shoot you if you tried to get that through customs with a bunch of wet rocks especially if there were any mantis shrimp peeking out of the holes. Store bought rock isn't very interesting because it is collected in shallow water, then thrown up on a barge which May also be used for a dance platform during spring break and those college kids doing the Macarena would tend to break off any protrusions making it kind of boring.

In the four decades my tank has been running I have gradually replaced the real rock I collected with "rock" that I built. I did that because the home made rock is nicer looking and IMO healthier for the tank. I feel it is healthier because it is hollow allowing more room for bacteria to grow. Weather this is a fact or not, I am not sure. I am not sure of a lot of things, but one thing I am sure of is that a Supermodel is never going to go out with me. Cool looking rock or not.

To build rock I take a piece of PVC pipe. I like to use PVC that is meant for electrical use rather than plumbing only because it is gray, but any PVC can be used. I like to use 1/2" PVC for most rock unless I was building something that is very large.

You can bend PVC if you heat it but you must do this outside. Fumes from heated PVC can and probably will kill you, so go outside even if it is zero degrees. It is better if there is a slight breeze so you don't breathe the fumes. If you heat it with a heat gun it is much safer than if you do it with a propane torch like I sometimes stupidly do.

So while you are outside doing this, look around (if you are a Man) to make sure there are no Ladies watching you because you will definitely look like a Nerd. Heat the PVC and bend it into an unusual shape. Of course it would be helpful if you first made a sketch of the thing you are trying to build.

Bend the PVC then if you like, bend a couple of more pieces to add to it. Go back inside and drill a bunch of holes through the pieces. Any size is fine and put the holes about an inch apart. Don't measure it and don't worry about the hole size, this is just for water circulation. 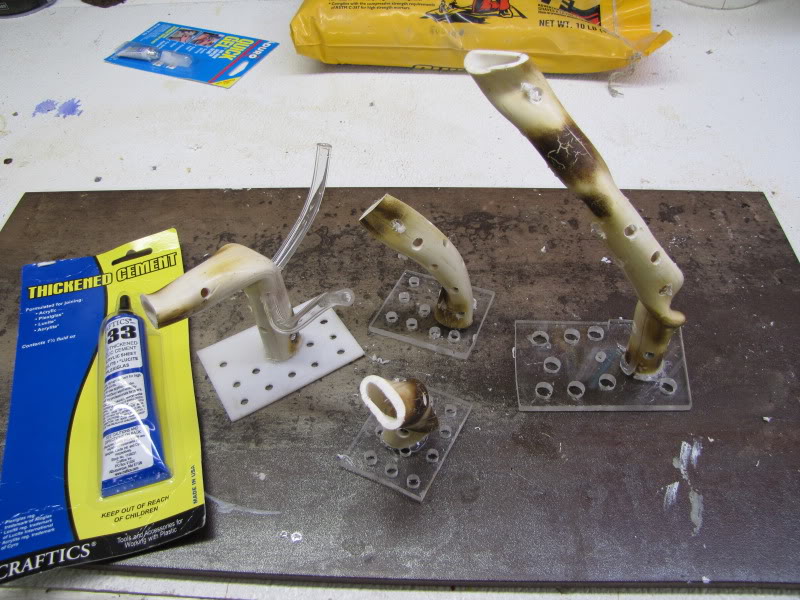 Now you need to put those pieces together in an interesting way. I use nylon screws available at hardware stores or Home Depot. Just put the thing together so it is fairly solid. You may need a few screws. It is sometimes easier to flatten up the end of one of the PVC pipes to make it easier to attach. It does not have to be neat and sloppiness is preferred. You can also use ty wraps and a glue gun. Yes glue gun glue is reef safe, I have loads of it in my reef but don't depend on the glue gun or ty wraps to hold it together it is only to supplement the screws and fill some gaps.

After you have that completed and it is fairly sturdy go to a bakery and buy some cookies. I like rainbow cookies. Send some of them to me and while you are there see if the salesgirl will give you 30' of that string she is tying the cookies up with. If she won't give you any string, compliment her on her shoes or hairstyle. If you still can't get string, go out someplace and buy "cotton" string. Not nylon, arlon, monofilament or anything plastic.

Take the string and completely wrap it around the frame you built. Try to cover all the PVC with string because cement doesn't stick to PVC or Paris Hilton's dog, but it sticks to cotton string.

Now go and get mortar. The stuff you lay bricks with. You can buy 2lb bags of Sakrete Mortar mix in a hardware store. Mix a little Mortar, about a cup and wet the string. Smear mortar on the frame using some kind of gloves. I don't use gloves because I am a real man but now I am typing with my knuckles because my fingers rotted off from the mortar, but that is up to you. 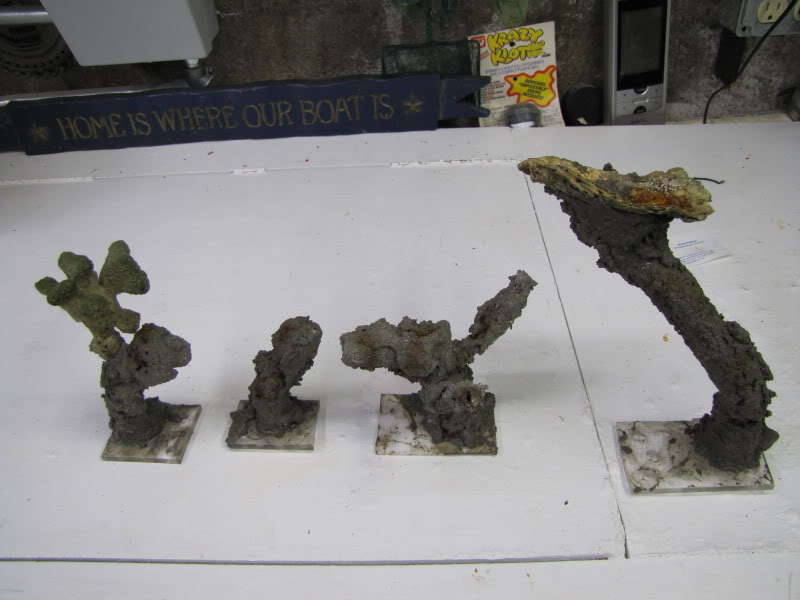 Most of the mortar won't stick, that is fine, just try to get a thin layer on. Now go out to dinner with your significant other or take a homeless person. Maybe try the calamari. Keep the thing damp by putting some plastic wrap over it or a wet blanket. If your girlfriend is a wet blanket, let her lay on it.

The next day add another layer of mortar and repeat the same thing going to a different restaurant with a different homeless person. Try the Merlot. You need to repeat this maybe five times until the "rock" has enough thickness so you are happy with it. The last few layers should be as sloppy as you can get. Don't smear on the mortar, instead, blob on pieces and get it different thicknesses. If you like you can make indentations to hold a coral or a picture of your Mother N Law. 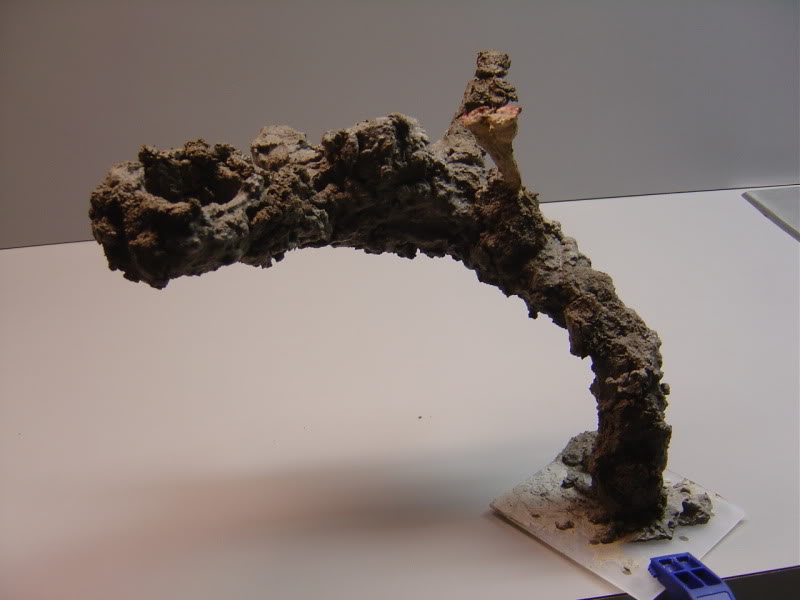 If the thing is meant to stand up, you need to add an acrylic stand. I drill a hole in the piece of acrylic and put a nylon screw through it into the bottom of the PVC. Glue gun or mortar it in.

You need to cure this piece by keeping it damp for a day then put it in fresh water for a couple of weeks.

After a few weeks in your tank it should start to develop some coraline algae because coraline algae likes mortar much better than it likes real rock, I am not sure why.

Call all your nerd fish friends or any Supermodels in the neighborhood to come over and look at it. If any of the Supermodels don’t seem to like what you built compliment them on their hair of shoes.
This was made to hold a coral off the substrate. 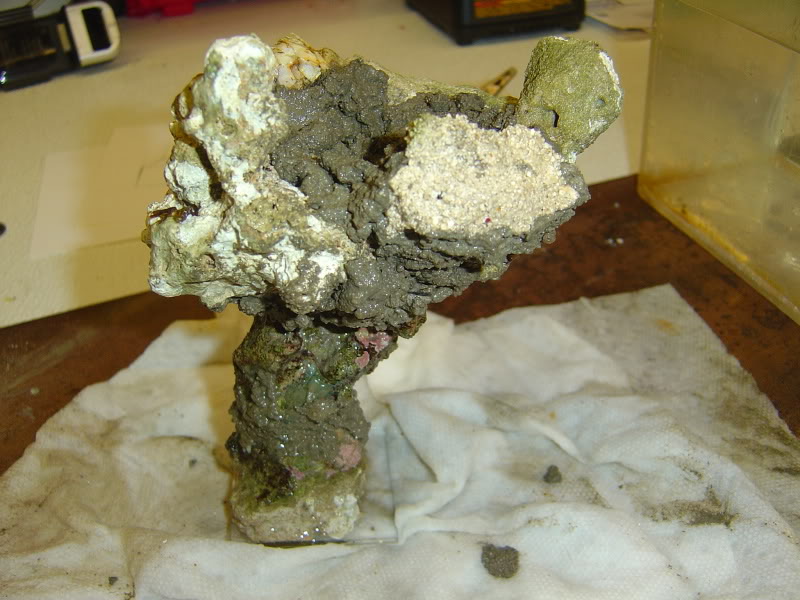 Here is a piece during construction and after it was in my reef for a number of years. 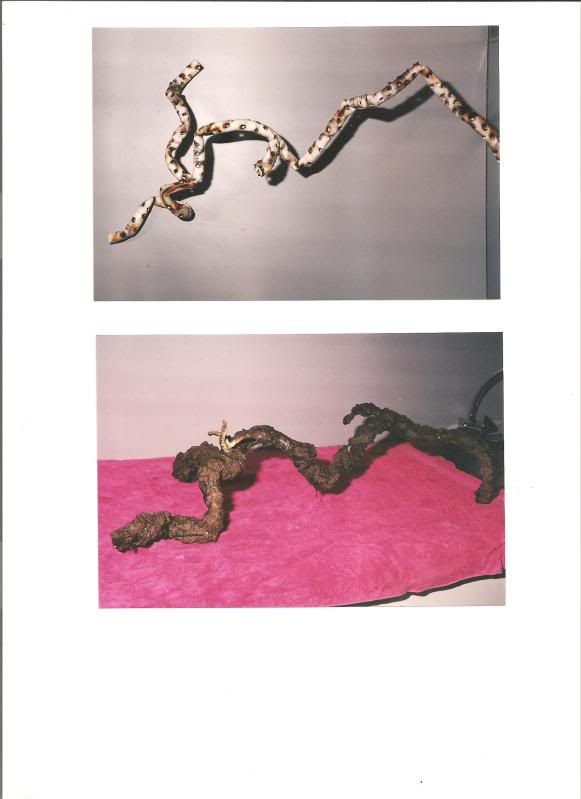 You can see that piece here to the right and above the Moorish Idol. It is about 3' long. 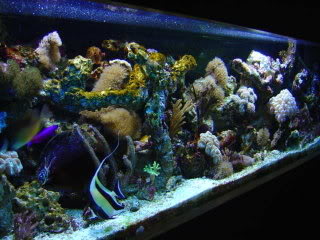 My entire reef structure is supported off the bottom using these. They are hardly seen in my tank 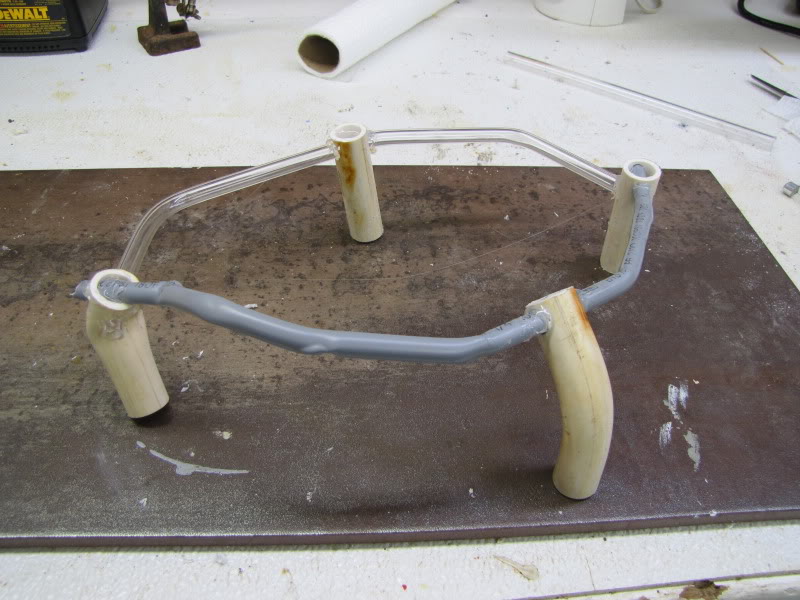 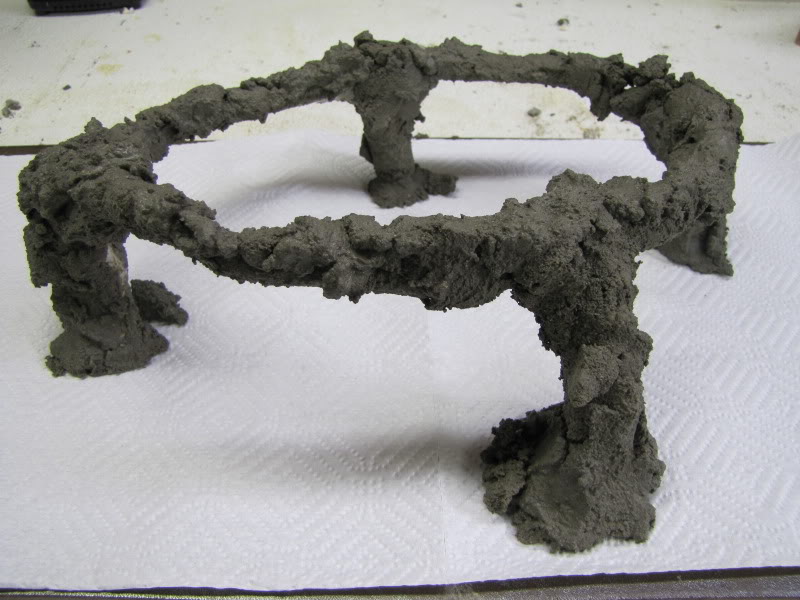 Probably half of my "rock" is home made and the entire structure is supported by these artificial structures. 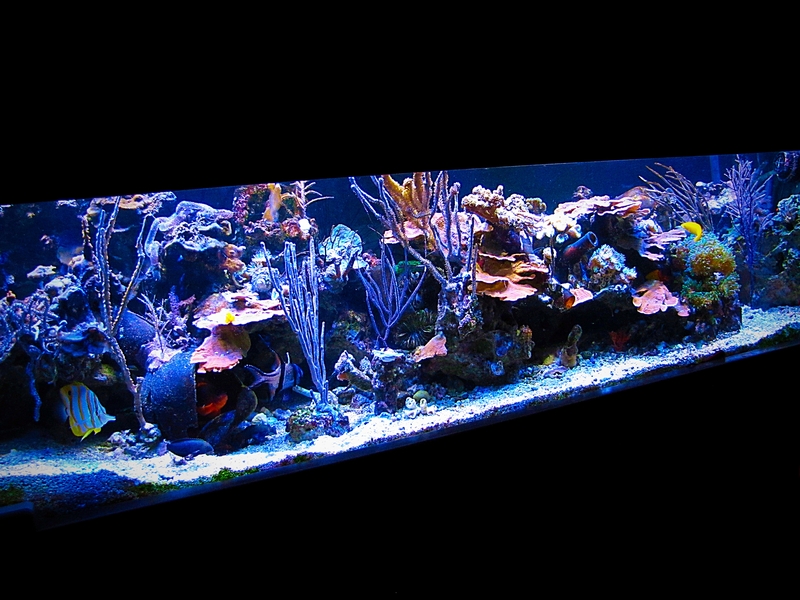 Winter break! well on my way to being an I.T. PRO

Only from Paul can we get this kind of information!

Looks interesting but I can't get the links to work? Getting an error saying they've been deleted?

Winter break! well on my way to being an I.T. PRO

Harris3005 said:
Looks interesting but I can't get the links to work? Getting an error saying they've been deleted?
Click to expand...

They work on my end

Worked for me. I think this may be a springtime DIY for me.

Another great article.! Thanks Paul

Sounds and looks awesome. I defintaly am going to try this!

Great write up Paul, you just gave some ideas on how to support my island in my next tank
OP

I am glad you guys like it. If you don't want to get that adventuresome you can build this a little easier. After many years in the hobby I had so many smaller pieces of rock and dead coral laying around so I cemented them together using mortar and came up with this. This rock is about 18" long and is the backbone of my reef. It was built out of about 8 or 9 small pieces of old rock and coral I had. You just wet it, blob mortar on it and prop it up on something until it sets. Then add another piece. It looks great and was almost free. 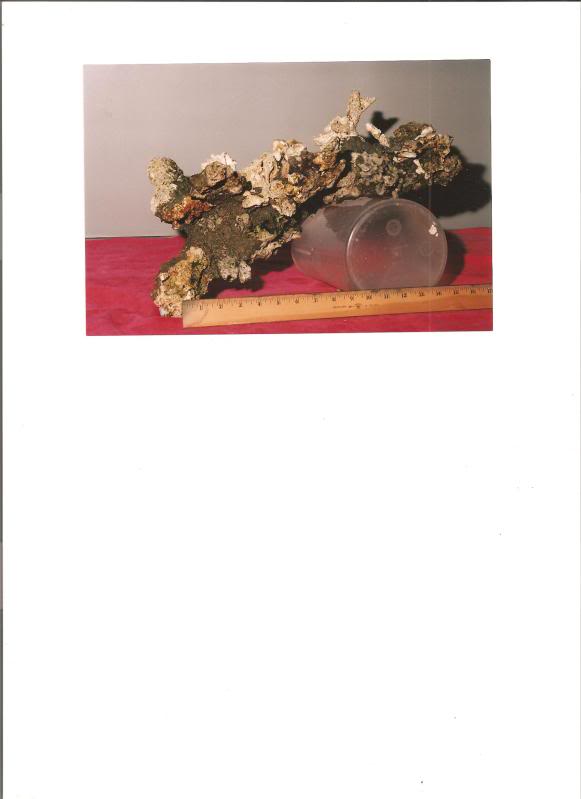 The ingenuity is fabulous. Thanks for sharing.
OP

Thank you. I have been building rocks like this for decades and it works very well. I can't tell with most rocks in my tank which ones I built and which ones were given to me by a Supermodel

I see potential here in custom made rocks as you can send your dead corals to Paul and he in his turn Blob it into something that fits your desire of layout for reef tank.
The PBCLR is created from a blob

Paul B said:
Just don't send me your dead fish
Click to expand...

Does the mortar man made rocks need to be cured in saltwater as well. Just concerned about residue bleaching out.
OP

Yes, anything made out of cement needs to be cured but not in saltwater. Freshwater is fine.

Paul B said:
Yes, anything made out of cement needs to be cured but not in saltwater. Freshwater is fine.
Click to expand...

How long should the curing process be for?
OP

Maybe 2 weeks. It depends on how large your tank is. If it's a five gallon tank I would cure it for a couple of months. In my 100 gallon, I do it for a week

So does this rock release any toxins that would affect sps