Erk's Attempt at a Reef

Well, tested PO4 yesterday and it was at .2 ppm. This is double what I've been measuring lately, but I didn't do a water change last Friday, so that might be why. Either way, dosing NO3 isn't working as well as I hoped. I could try increasing the amount of NO3, but what I really want is to just drop PO4 to a level where it can naturally be consumed by the tank. I did a bunch of research into lanthanum chloride. Seems I only need a small amount to drop my PO4 to undetectable levels. Going to try this route. So frustrating since for over a year, everything was balanced and fine. Then one equipment issue upsets everything.

What are you using for your lights erk?

The tank looks amazing and fish photography as well.
OP

sergebmw2 said:
What are you using for your lights erk?

The tank looks amazing and fish photography as well.
Click to expand...

Thank you very much. Really trying to get thing back on track. Hopefully I can get things looking good again so I can take more pictures.

My lights consist of a hybrid approach. 6 T5 bulbs and 2 Lumia 5.2 pucks with 120° lenses. I bought one of those cheap 8 bulb grow light fixtures off Amazon and removed the two center bulbs. Then cut holes for the LED pucks and mounted them in. I recently replaced the cheap ballasts for a pair of Fulham Workhorse 5s. The bulb combo is 2 ATI Blue+, 2 ATI Coral+, and 2 ATI Aquablue Special. This combo is my favorite so far.
OP

Removed about a third of the sand today. Pretty foul smelling. Hopefully I'll start to see some improvements on the PO4 levels.
OP

I removed another third or more of sand from the tank. I might be done with pulling out sand. Want to keep a little bit for the melanaurus wrasse. His happiness is more important to me than keeping corals.

I am actually liking the no sand look. I can now crank up the flow to make my corals happier and keep food/detritus in suspension longer.

Started dosing Phosphat-E now that the sand has been removed. PO4 started at .21 ppm. After 2 doses of 6mL diluted in 1L, I'm sitting at .10 ppm. Going to do another dose of 6mL to get below .1 ppm. Then I will stop dosing for a day to see how much it rises to get a good idea of the daily dosing amount. I'm thinking that with the crash, there must've been a decent amount of PO4 bound in the rocks.
OP

Got PO4 down to just below .1 ppm, then LaCl wouldn't take it any lower. I bought GFO to take it down to acceptable levels and keep it there. During the time between ending the LaCl and starting the GFO, PO4 dropped to .06ppm, then steadily rose back up to .08ppm. Still unsure if PO4 is causing my problems, but it's definitely out of the norm, so I'll get it back to normal.

I did notice that one of the magnets for my XF150 was bulging, so I pulled the pump and ordered new magnets. I also pulled my magnetic frag rack in case it is causing issues. I put my R2R partner frag rack in the tank and a couple cheap test frags. Will see what happens next.
OP

Replaced the magnet on the gyre and started running GFO. PO4 dropped to .03 ppm. I noticed that it seemed like things were nutrient restricted and measured NO3 with the API kit. Came out 0 ppm. It's probably not zero, but very close. I also noticed my tang was looking a bit thin, so I upped feeding frozen to every night and I give the tang a quarter piece of nori every morning along with the daily dry foods.

Since increasing feeding and getting excess nutrient levels down, I've noticed a steady jump in alk consumption. So hopefully this means everything is on the up and up.
OP

My alk consumption has risen from about .3 dKH to .5 dKH over the past week. Seeing way more coralline algae now. I purchased a brown looking "mini colony" on an ORA plug from my Petco as a test subject. It's been in the tank a week and appears to be growing slowly but looks happy. Slowly coloring up too. I purchased another test frag to see if things are really bouncing back. It's been in the tank a couple days and looks happy too.

Seeing more algae growth, but I'm fine with it. Free food for the tang and snails.

Snagged this pic of my zoa colony. This colony has exploded with growth over the last year. 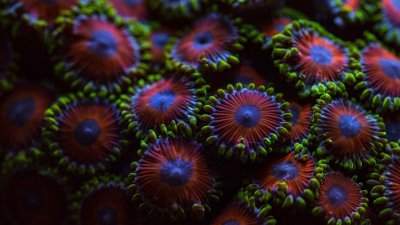 Here is the new frag. I like the red polyps. The coloring is very pale, but it has a nice pastel red, blue, and green coloring. Hopefully it will keep growing and I'll get to see some nice colors. 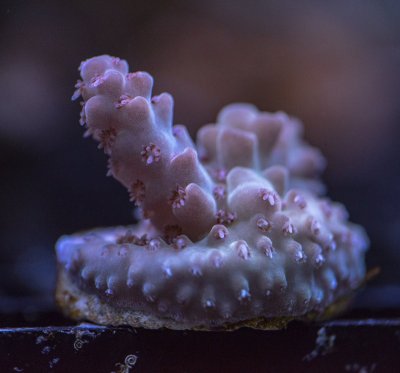 Alk consumption is still on the increase. From ~.1dKH per day to .56 dKH per day in about a month. Coralline algae growth continues to increase and the tester corals I purchased 2 weeks ago are still alive and showing signs of growth. PE is great as well. My only issue has been temperature. It has been 80-82°F for several weeks now. Odd since it is winter. I tried identifying the cause, but from what I can tell, there is nothing strange going on. So I added a fan this morning to blow across the top. Now the temperature is back down to the 76-78°F range. Hopefully it holds here. Was worried I was going to have to buy a chiller.

Still feeding a lot of food. Even with all the food I feed, the algae growth is minimal. The yellow tang does a great job of keeping it in check and I feed nori everyday.

I purchased some more corals yesterday from Aquastudios Aquarium. This might be my favorite new LFS. Got a few SPS. An anacropora and two acropora. Also got another leptoseris. Trying again since I've never been able to keep these. So far, it is very happy and inflated.

@bubbaque you said to copy you once I was able to grow SPS again. I think that day has finally come.

I missed one day of feeding and most of my SPS receded a bit or had very thin flesh at the tips of branches. This is the pain of a nutrient balanced aquarium. Not enough excess nutrients to go more than half a day without feeding. Normally wouldn't miss a feeding, but the birth of my daughter takes precedence in this case. Been running home briefly to feed the tank frozen food. SPS have stopped receding and look better.

Just read your build. Congrats on the birth of your daughter. Love the pics that you've taken.
OP

Dub_G said:
Just read your build. Congrats on the birth of your daughter. Love the pics that you've taken.
Click to expand...

Thanks! I'm hoping to take more pictures as the corals grow. Need to take a new FTS soon.
OP

New FTS taken this evening. The left side of the tank has a lot of growth. Working on repopulating the right side now. 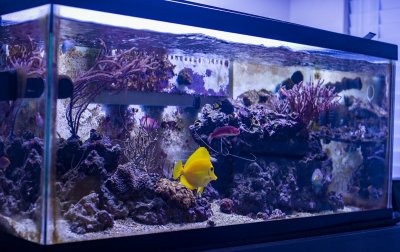 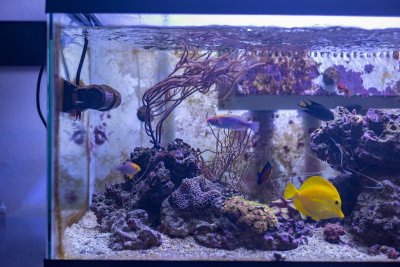 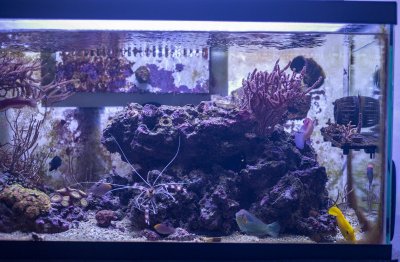 Snapped a few other pics that I liked as well. Decided I'd share them as well. 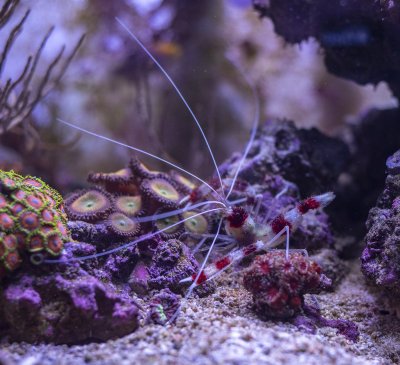 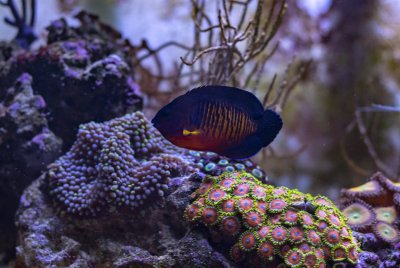 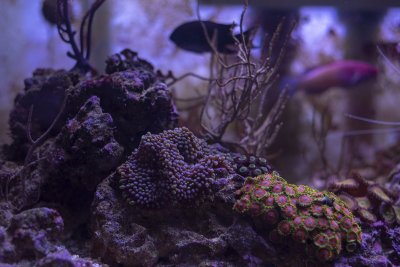 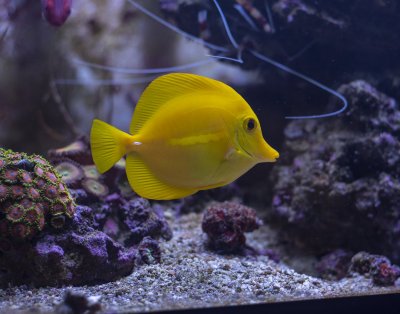 Pulled the camera out to get a picture of my CB angel with the damaged eye and decided to snap some shots of my Lubbock's. Such a great looking fish. I got this wrasse at around 1.5 to 2 inches long. Now he is about 3-4 inches and the tank boss. 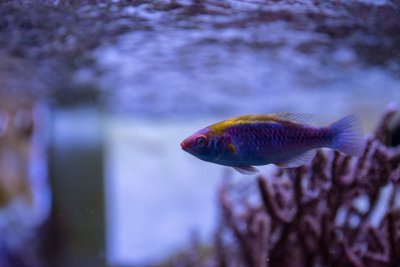 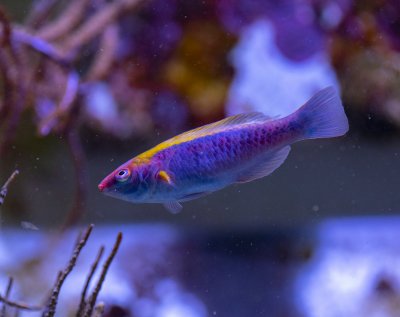 This is a blurry photo of him flashing. So hard to catch a good photo without flash when they are moving fast. 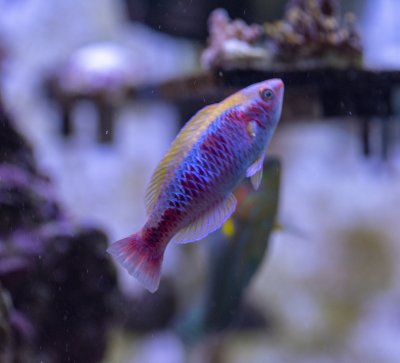 My Red Velvet wrasse. Love this guy. So great looking. It appears he damaged his lower jaw at some point. Definitely doesn't stop him from stealing all the food I feed the tank. 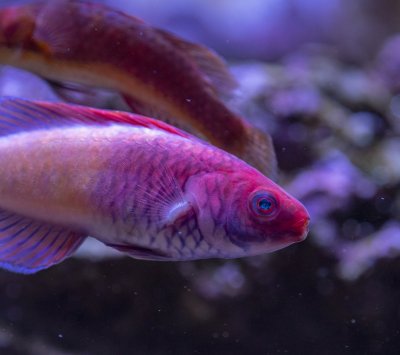 holy smokes, you've got some awesome photos of your tank mates and one great looking tank. Stay with your water because when I check back in I want to see growth pics...if you get a chance, I really like the frags you've picked out.
OP

Not sure why I chose to frag some zoas and palys at 11 at night, but it has been something I've been meaning to do for awhile. Made 3 nice sized eagle eye zoa frags. One frag of what I think are rastas. Not sure on those. And glued a tiny blue florida ricordea to a frag plug. Gonna take these into my LFS for some credit. Might also make some gorg frags and take those in as well.
OP

I bought a new BM Curve 7 to replace my aging PM 426 skimmer. Decided to get a new skimmer because the 426 just would hold a water level for more than a couple days. Had to tweak it everyday to keep it skimming correctly. The Curve 7 is an awesome skimmer. I had to raise it up a bit because the water level in my sump is 12 inches. Printed some riser feet out of ABS and installed them. The skimmer has been skimming dark skimmate since I installed it.

At the same time I found that my zeolite reactor had a pump failure. Not sure how long the pump has been out, but when I finally found it, the zeolite rocks had turned black. I pulled the whole reactor so it wouldn't further foul the tank.

Update on discontinuing vodka dosing and lowering alk to 7dKH. I've been running at ~7dKH for a week now. Turned off vodka dosing completely around the same time. NO3 and PO4 are up to about 20ppm and .25ppm respectively. LPS look good. SPS initially looked to be improving, but now they are declining once more. I checked calcium and magnesium and they are at good levels. All the algae is dying in the tank, which I attribute to the rise in NO3 and PO4. But I don't get why SPS continue to get thin flesh in certain areas then slowly perish. They have good color during this time and great PE. But still, slowly die. I wonder if I have a deficiency of some other element, but I would think if that is the case, I'd see improvements initially after a water change. I dose ESV 2 part, so it is supposed to replenish the micro-nutrients to some degree. Maybe I should try holding the alkalinity at 6.8dKH?
OP

Just discovered that my analog temperature sensor from Atlas Scientific has shifted on me. It is no longer linear. I'm estimating that I have been running the tank at 70-72°F for several months now. The whole time I thought I was at 80-81°F. I will be replacing the probe, but in the mean time will run the heaters off their internal thermostats. Maybe I need to buy new heaters too?

I use an InkBird ITC 308 Temperature Controller. Has spots for two heaters and one for a chiller or fan. $30-40 new and has worked great.

EDIT: Just wanted to correct this, there is only one heater outlet. Forgot I used a Y-Splitter.