Explain why Roberto can break the SPS rules and succeed?

Someone explain this wild phenomenon to me.

Why didn’t his tank get the ugly stage?

How was he able to keep the acros alive in a new tank?

Why doesn’t get dinos in his tank with low nutrients?

I think he runs a skimmer and refugium as well. Mainly feeds corals by feeding the fish. It’s not his first tank either! He has repeatable success.

He clearly made a deal with the devil and sold his soul for perpetual SPS success.
OP

Maybe lower alkalinity (Ocean levels) is less stressful to acros? I know that high alk and low nutrients can lead to burned tips and possible RTN?

Very interesting nevertheless. I wish to understand his method.
T

I think he's probably also in there with a tooth brush so often it would make us lose interest in the hobby. Amazing tank. Only speculating. Wish mine was as clean.

He is not the only one. There are others who have done this with success, and I think the theory is that the dead rock gets seeded by the coral colonies and bypasses the usual wait through the ugly stages. How much is method and how much is luck???

t5Nitro said:
I think he's probably also in there with a tooth brush so often it would make us lose interest in the hobby. Amazing tank. Only speculating. Wish mine was as clean.
Click to expand...

He did state that he scrapes the tank every 15-30 days. And before any pictures.

I think it’s so cool how he didn’t introduce any coralline algae by only using dry rocks.

The maintenance for the back glass is probably next to none and can be easily brushed off. And the rocks are covered by the corals anyway that he doesn’t even need the coralline. Adding it would just be a hassle.
T

Probably also has quality foods and feeding schedules down pat. My fish are beggers, and I keep dumping the food in and deal with the algae consequences.

Easier to keep SPS at low alk imo... so ya that matters I feel. Especially with low nutrients.

What makes you think he didn't introduce coralline? It probably doesn't grow much because of low nutrients.

I mean I see spirorbids worms on this (and another frag) and what is probably coralline on the top of it.

I find coralline doesn't grow as fast in low nutrients. He probably introduced it tho just like those worms can take over under right conditions. 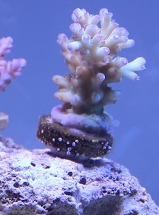 Tamberav said:
What makes you think he didn't introduce coralline? It probably doesn't grow much because of low nutrients.

I mean I see spirorbids worms on this (and another frag) and what is probably coralline on the top of it.

I find coralline doesn't grow as fast in low nutrients. He probably introduced it tho just like those worms can take over under right conditions. 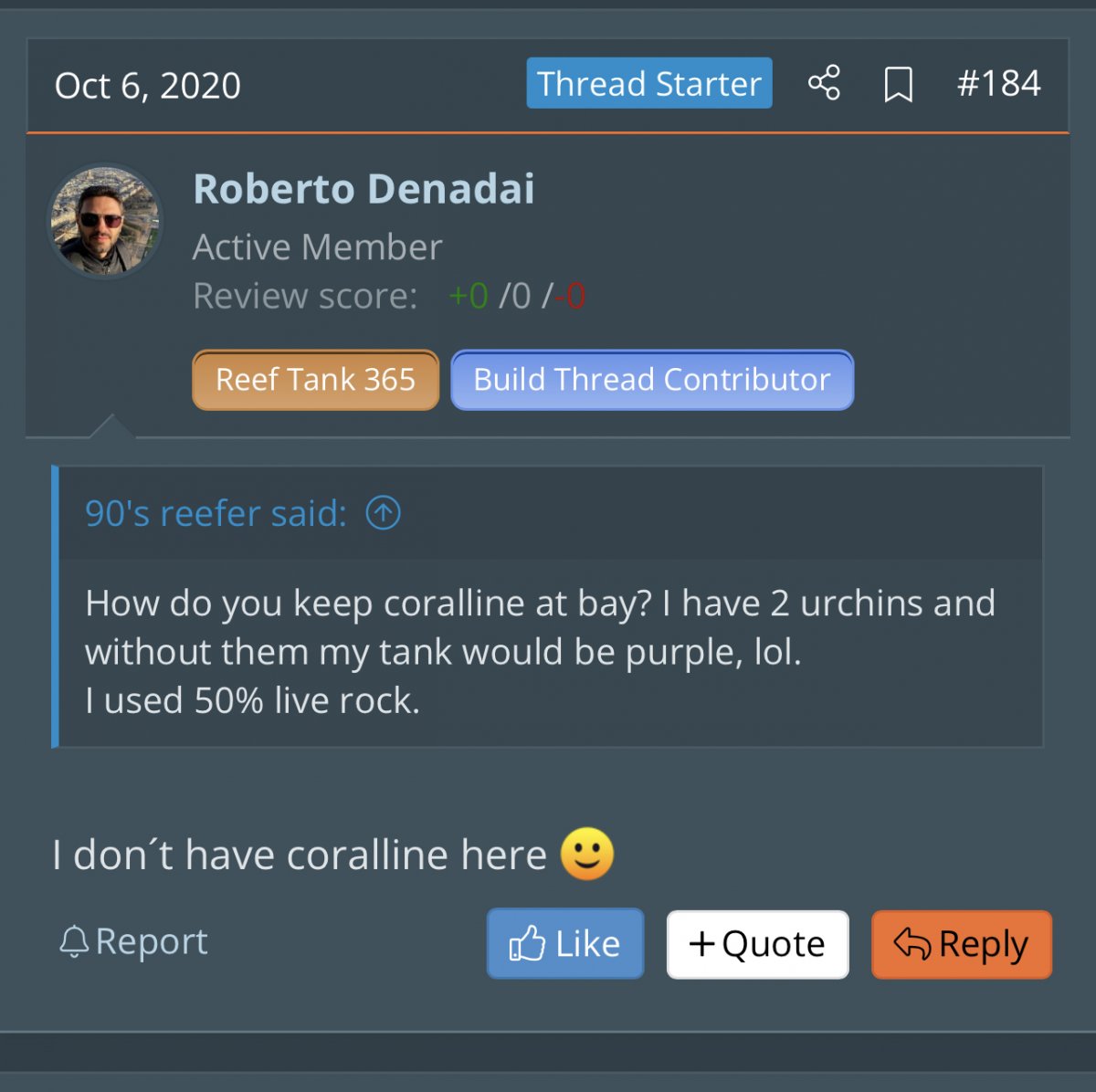 This is why I assumed he didn’t have any. If he does but controls it with low nutrients that’s great.

Could aslo be dosing / zeovit tank setup it’s a different style on reef keeping. Low nutrients/ very clean tank . It takes a lot of understanding/expierence /maintenance/ and equipment. That’s why I run softies and barley test and feed to my fishies content! Lol

This is why I assumed he didn’t have any. If he does but controls it with low nutrients that’s great.
Click to expand...

Perhaps it died off from his low nutrients or such... but looks like he introduced some stuff on his plugs.

You can't often copy cat another person tank and find success.. a lot of times you just can't repeat the same scenario in reef tanks. Each person should listen to their tank and find what works for them.

Miami Reef said:
...I think it’s so cool how he didn’t introduce any coralline algae by only using dry rocks...
Click to expand...

I only used only dry rock and my tank is covered with it. Came in on the tank inhabitants.

Using only dry rock is not a complete solution to prevent it, if that's what one is trying to achieve.

He obviously has a high level of skill with the "type" of tanks he keeps, compliments to him!

His tanks have an unnaturally sterile appearance to me though, almost too perfect. My guess a lot of hard work.

He's not doing anything different than what we did 10 years ago or so. My old systems were set up with dead rock, shot for 0/0, gfo - carbon strong lighting, strong flow, a good skimmer, and some means of supplementation (in my case dosing). It was not all that uncommon, he has quite the aesthetic eye and a knack for laying out tanks and picking the right pieces to make the adjacent pieces pop.

My tank wasn't nearly as clean I did not leave enough room to scrape things (nor did I care to) and corals were growing all across the bottom, but the methods worked well enough. 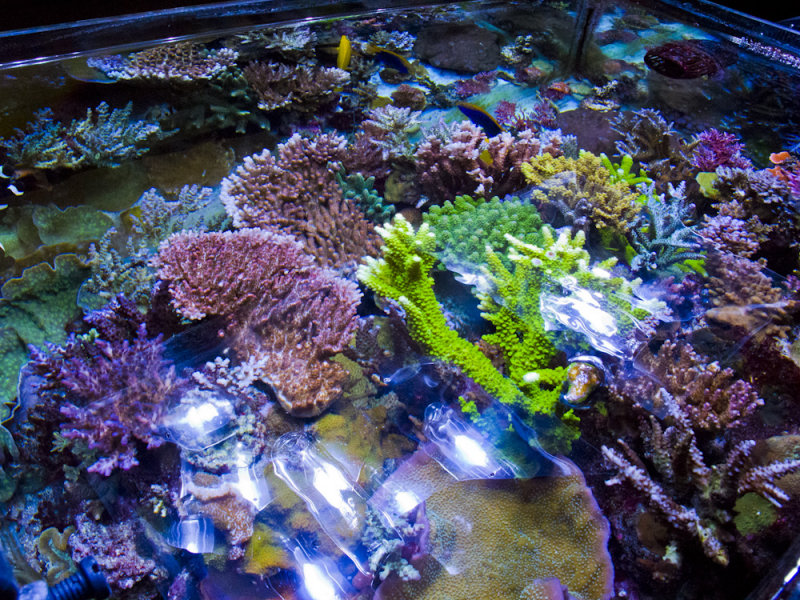 As far as how he was able to get it up and running so quickly wouldn't be surprised if the sand and pebbles or whatever he keeps in his sump were pulled out of a different system. Somewhere he said I think it was his tang (maybe it was another fish) was 9 years old; which leads me to believe this isn't his only system running; however that is purely speculation on my part. That rock work could have been dry when he put it in a different system to let it cure before moving it over to this tank; who knows the thread starts a month in and nobody has asked him if he started the tank 100% dry added water then 30 days later added corals or if he pulled things out from another system let it work out it's kinks for 30 days then added corals.

To be fair I added SPS to my current system around the 30-day mark as well but arguably took things a lot slower with only a couple frags. Had I had access to the plethora of cheap mari-cultured pieces I used to, I may have done an insta-tank as well, but I wanted to go almost all aquaculture this time (or as much as I could) so a handful of little frags it was.

In addition, my current tank was set up using old rock from teardown. I inherited all junk that was bound to their rocks and had to let the system work its way through that.

I don't believe in "rules" only guidelines anyways. We don't know how our tanks really work and often the things that are happening are invisible and far more complex than what we can test for. Also, forums are full of people who failed, which is why they post and ask what happened. There might be more people doing this with success than their are with failure and we don't know simply because they don't ever feel the need to talk about it on the internet.

The simple answer is that he works hard. Most reefers don't spend as much time on all of their tasks as he likely does on cleaning.

The more complicated is likely much harder and nobody will know with so few details. If he truly keeps NSW type of residual building blocks, then those are ideal conditions for coralline to grow like crazy. You can see some film and algae on the frag plugs where they have been cleaned.

My guess is that he is smart, has experience and is good at what he does... and works hard. You can have success with many different methods if you are all of these things.

This tank should make some of you question things that you think that you know. I have been laughed off of this board about dinos and low "nutrients" having no correlation, but the big thread of message board mob says otherwise even if most of what is in that thread is not really accurate. I would have to know a lot more about these rocks before I had an opinion on them - it is easy to get the phosphate out of them (for real, not just acid bath surface removal) if you plan ahead and take some time... if I had to guess, they were seasoned in another tank for a while, but just guessing.

Why don't you just ask the man himself?

NOT testing Nitrites;) Not even For fun

Hard work, dedication, smart tank stocking and keeping things tight to the best of his ability. Really is that simple.

Im sure its a matter of heavy import and export. Thats how i start new tanks and throw coral in right away. I wouldnt recommend it to anyone new to the hobby but it can be done if you're good at keeping everything in check.

As for the nutrients issue, when we test the water for nitrates and phosphates we can only test for available nutrients. That doesnt mean that the corals and microfauna havent gotten nutrients during feedings. My one frag tank thats about 4months old and filled with coral reads near 0s on test kits but im also feeding aminos and powder foods often without having any issues (knock on wood lol). Id say when the nutrients truely bottom out AND theres not enough nutrient import is when you start to have issues with low nutrient systems.

N
Can an SPS still grow with little to no polyp extension?

Anybody have experience with glitterbomb goniopora? I have a chance t buy one!