I’ve decided to start my first ever reef tank after spotting the AIO Fluval Flex 32.5 Gallon Tank Kit (Aka Fluval Flex 123L). Figured the all in on (AIO) was the way to go since I’m a first timer and the setup seemed pretty simple to grasp. However, after reading about this tank from other reefers there many modifications and ways to improve the tank. I’ll touch on these mods later. But first, here’s what I’ve got so far.

After a week and a few ammonia spikes I treated the tank with Dr. Tim’s One and Only and gave it a few days to re-test. Things were good but nitrites and nitrates were still high. Waited for those to drop and got a Green Duncan frag from a friend with a Feather Duster as well. I added them in a little soon but put some BioSpira in with them and they did fine.

In exactly 2 weeks the cycle was completed with only 2 days of visible diatoms. I was discouraged as this was my first experience with the brown algae and wanted to finally get some livestock in the tank. Parameters we steadily health for the last 3-4 days so I went to my lfs and asked them for some advice. They reassured me the diatoms were a sign of a completed/almost completed cycle and if I wanted to I could try a few clowns and some clean up crew. So, since I’ve had plenty of experience keeping fish in the past and was closely watching my water levels I decided to give it a shot! I was a little nervous as two weeks is the “minimum” time it takes for a tank to be safe. With that being said, I got two Orange Storm Clowns, a Red Starfish, 1 Blue tang, 2 emerald crabs, and 3 large snails. I added 2 small pieces of CaribSea live rock for future mushroom or other coral islands.

So far everything seems healthy and happy! Hope you guys like it! Any and all suggestions or feedback is greatly appreciate and welcome! 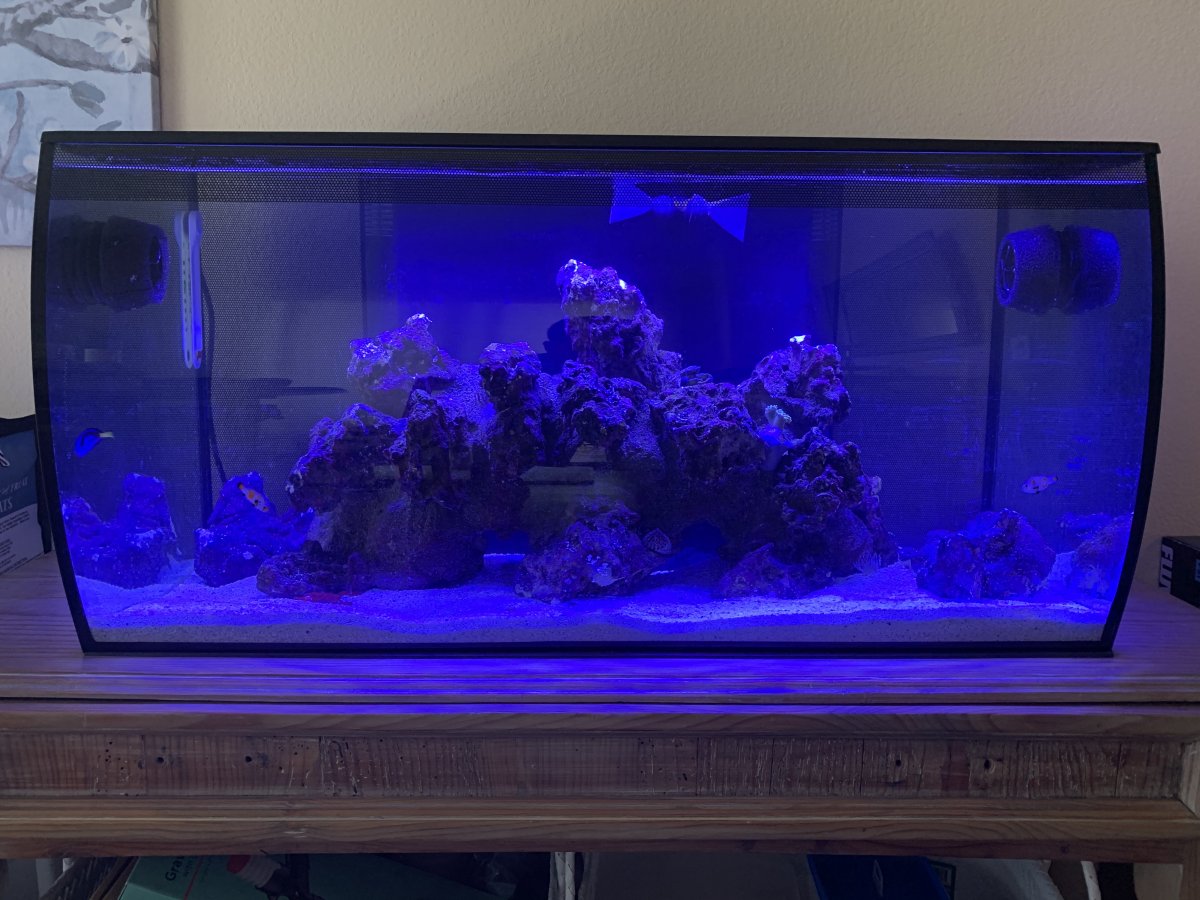 Im not being mean or anything, but you will need to upgrade your tank or rehome the Blue Hippo Tang when it gets better.

Nice start to your tank though!
OP

Thank you!!! I was super happy with the 24” piece!! Although, I came with some bubble algae haha... my fault for not thoroughly checking and cleaning the rock before adding it but after 24 hours of adding the two emerald crabs 2/3rd’s of it is already gone!

14g Nano said:
Im not being mean or anything, but you will need to upgrade your tank or rehome the Blue Hippo Tang when it gets better.

Nice start to your tank though!
Click to expand...

Agreed! Was told it would be a huge help it stabilizing the tank for now! I have a few buddies that can house it when the time comes! Also heard tangs can help with the Bubble algae but more so the fox face and those for sure won’t fit...

A small foxface could be in there for a little while, but like the tang, it will need to be moved.

Honestly I drool over these tanks every time I see them at the LFS. Have fun with it.
Lotta small blue tangs available right now. I've been considering it myself. But do don't wanna have to rehome it, so I keep passing by the idea

Blue tangs are pretty fish though

BTW didn't see a heater in your list of equipment?

Yikes I did forget to list it... thanks for that! Haha just did the “edit”

This tank does not come with a heater so I added a OASE Heatup 100 that I got from my lfs. Seems to be working great I haven’t not had to adjust it once. I’ve placed it in the sump where some might put the PS1 protein skimmer. But, I saw nothing but negative feedback about the skimmer so holding off on that for now and exploring other skimmers/options.
OP

Here’s a picture with more white light for a better view of the rock layout. 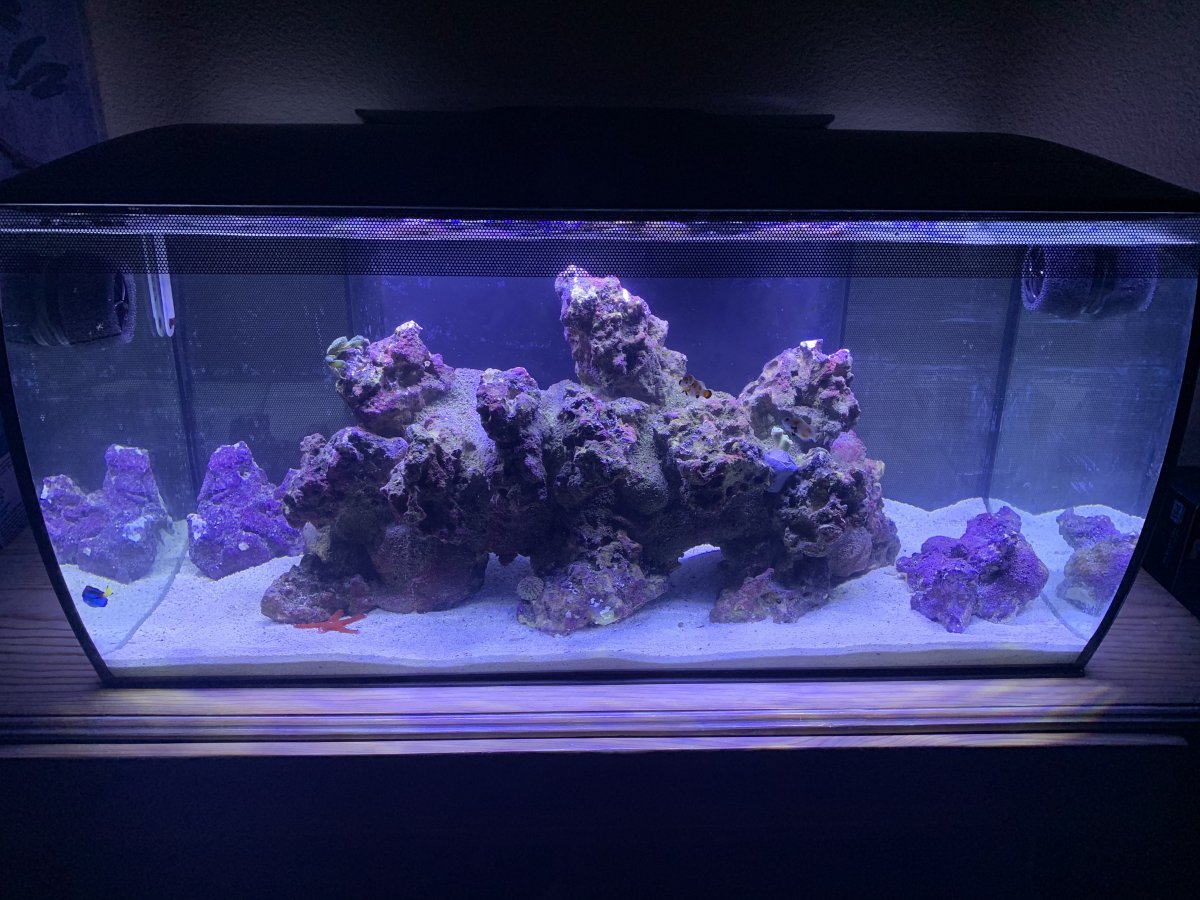 *Update*
Decided to use one of the small rocks to start a mushroom island!! 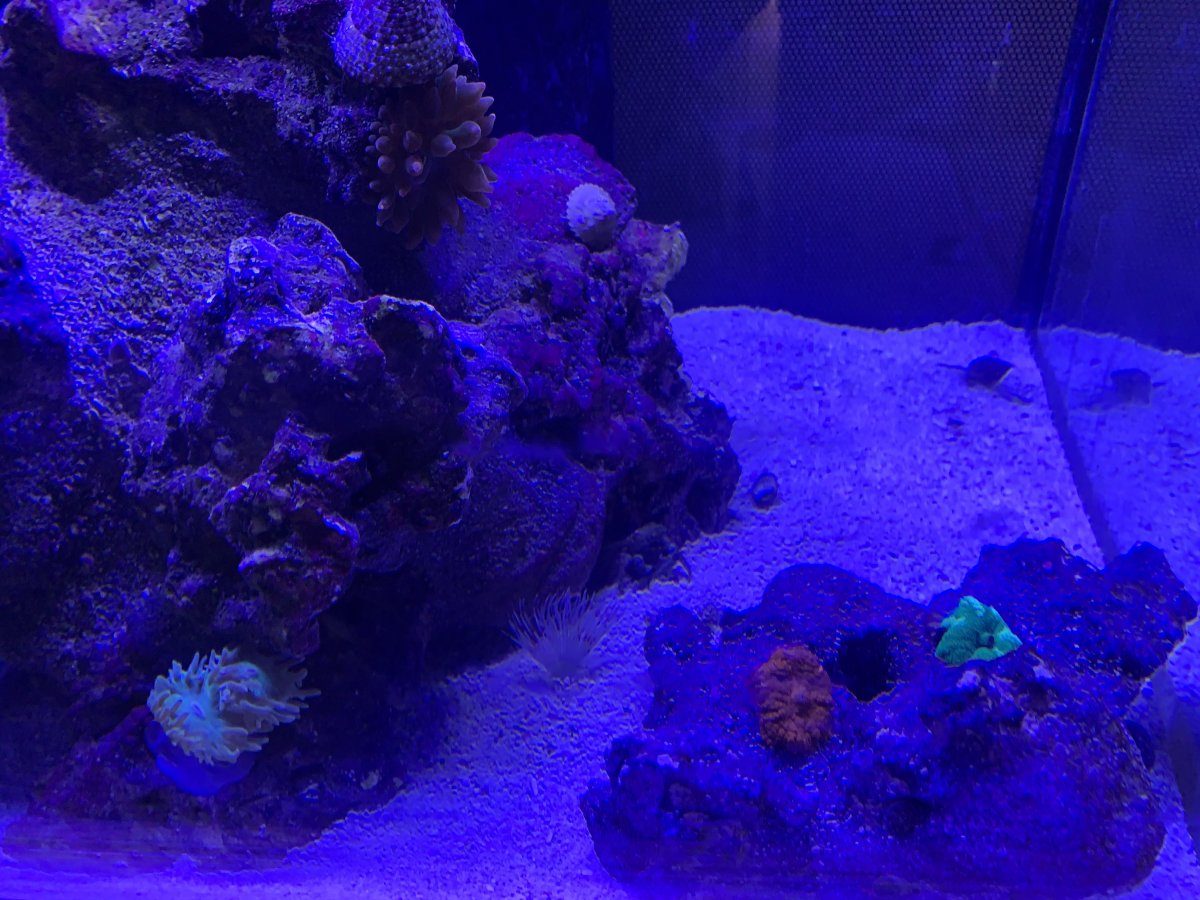 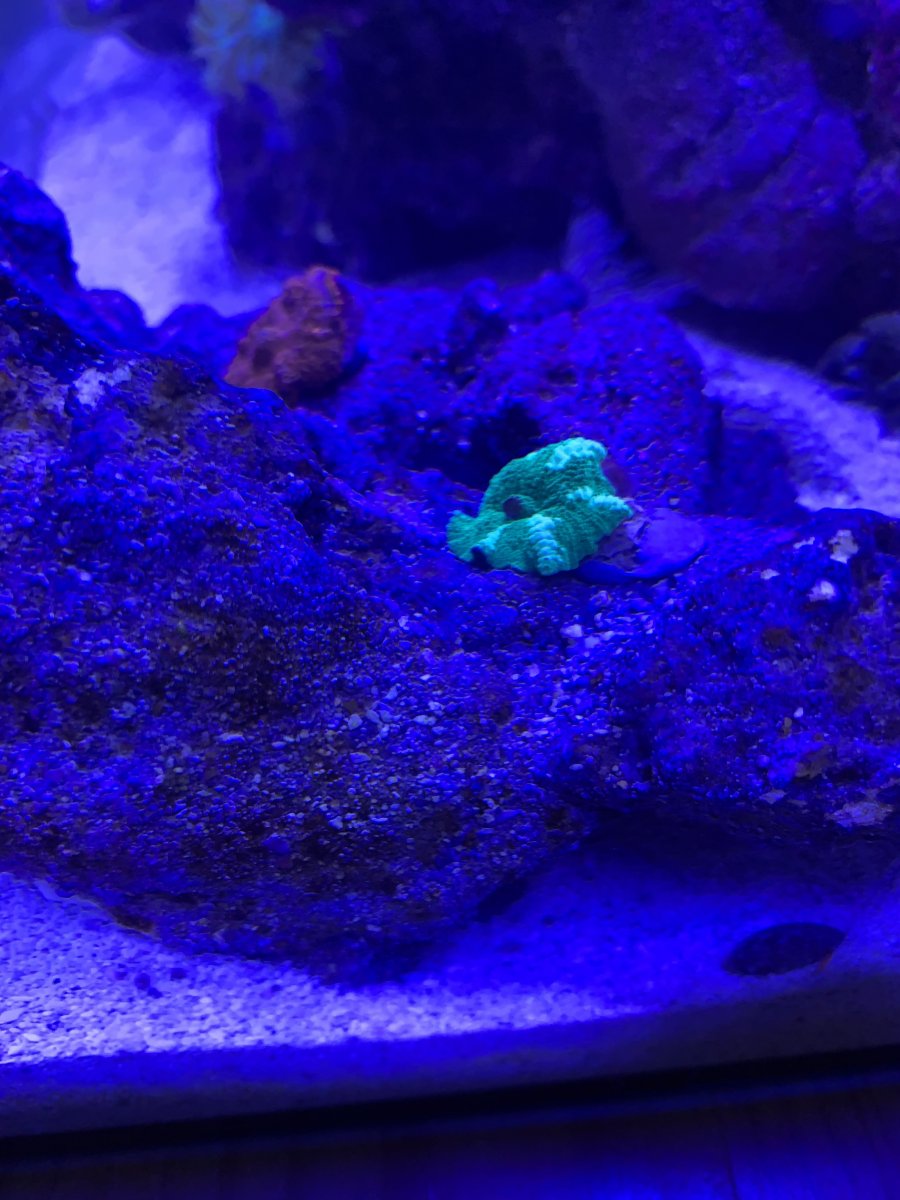 I saw this tank at the LFS this last weekend. Super Sweet!

My husband just snagged a 13.5g one on Marketplace ... but he's doing a beta.

Rip2131 said:
I saw this tank at the LFS this last weekend. Super Sweet!

My husband just snagged a 13.5g one on Marketplace ... but he's doing a beta.

Nice!!! So far I love it!!! still deciding what to do as far as proteins skimmer and and may do a canister or reactor so i have more filtration but not sure yet. ill be sure to keep you guys posted! currently getting some anemone and working on a mushroom island with on of the small rocks...

let us know if u guys do a Build Thread!

Awesome! I love seeing other people with the same tank!
Might I ask what light settings you use?
I also just got hit with some brown algae, going to get some CUCs tomorrow!
OP

Astro said:
Awesome! I love seeing other people with the same tank!
Might I ask what light settings you use?
I also just got hit with some brown algae, going to get some CUCs tomorrow!
Click to expand...

My light setting was pretty high when I first started and I did some research once I ordered the 2nd Fluval Marine 3.0 42w light. These lights don’t get enough credit in my opinion... when doing the research it was seeming that two lights would be a “must” to keep nice Coral but I’ve got anemones and mushrooms atm and with two lights I’ve turned them down and run this cycle with both!

I hope this helps!! I’m no expert just research and feedback... also since turning my lights down I have less detritus and my anemones are much more full and open!!
Here’s a look at the second light installed: 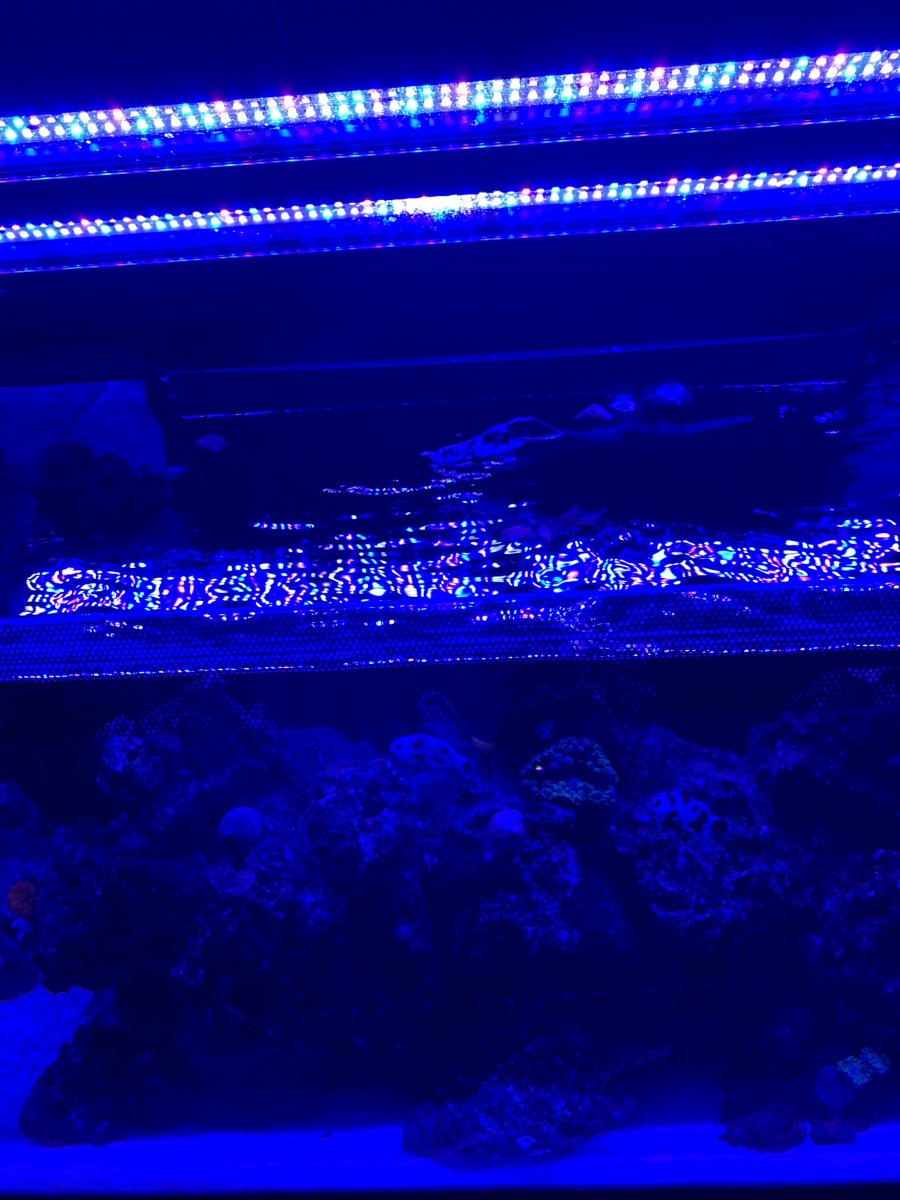 Added two mushroom islands in either Sadie with 4 little mushrooms each to cover the rocks!

3 orange storm clowns are doing great! They haven’t taken to the anemones yet but there are two rainbow bubble tips, one on either side, which I did hope for with placement and got lucky! However, there are 2 other bright green Lime Ghost bubble tips that decided to move to the back so I hope they change their mindit’s dark and low flow back there I’m sure they will. 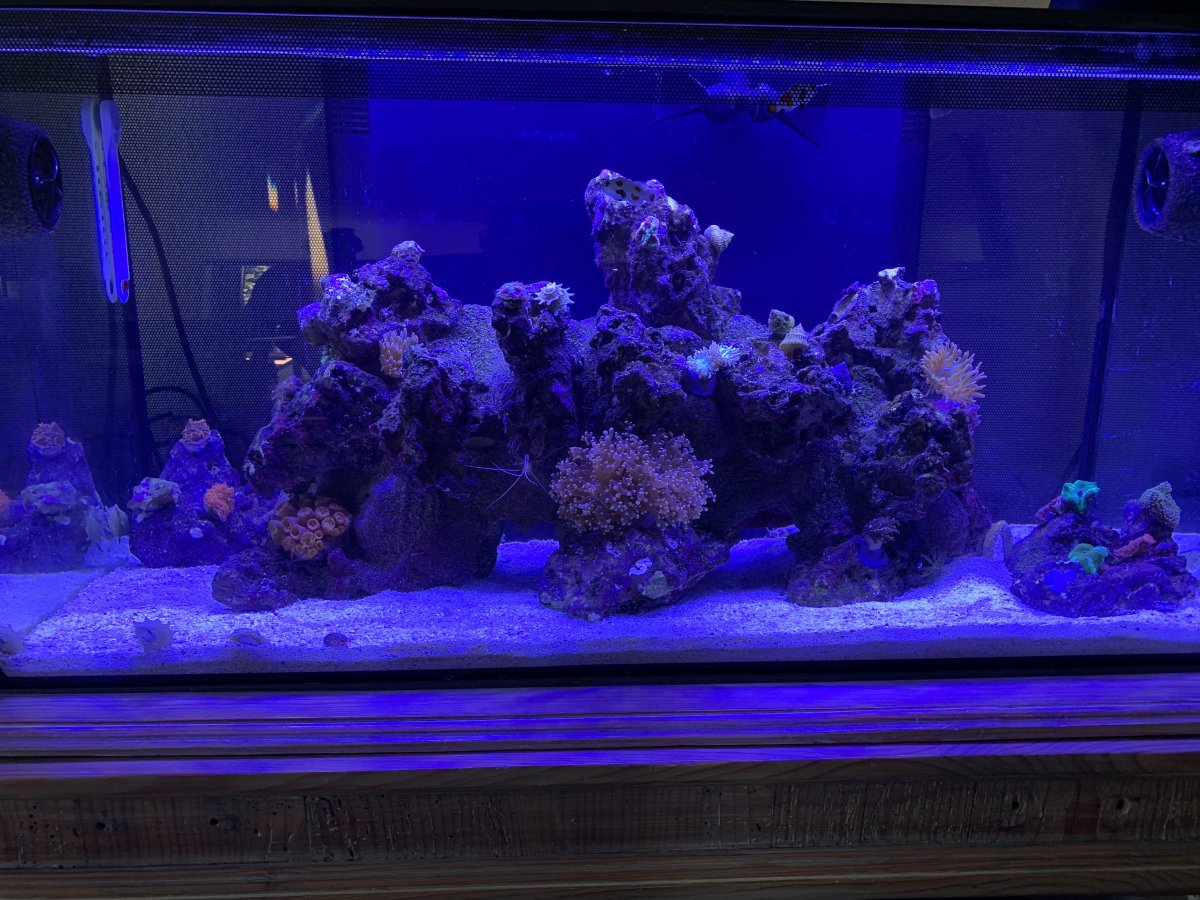 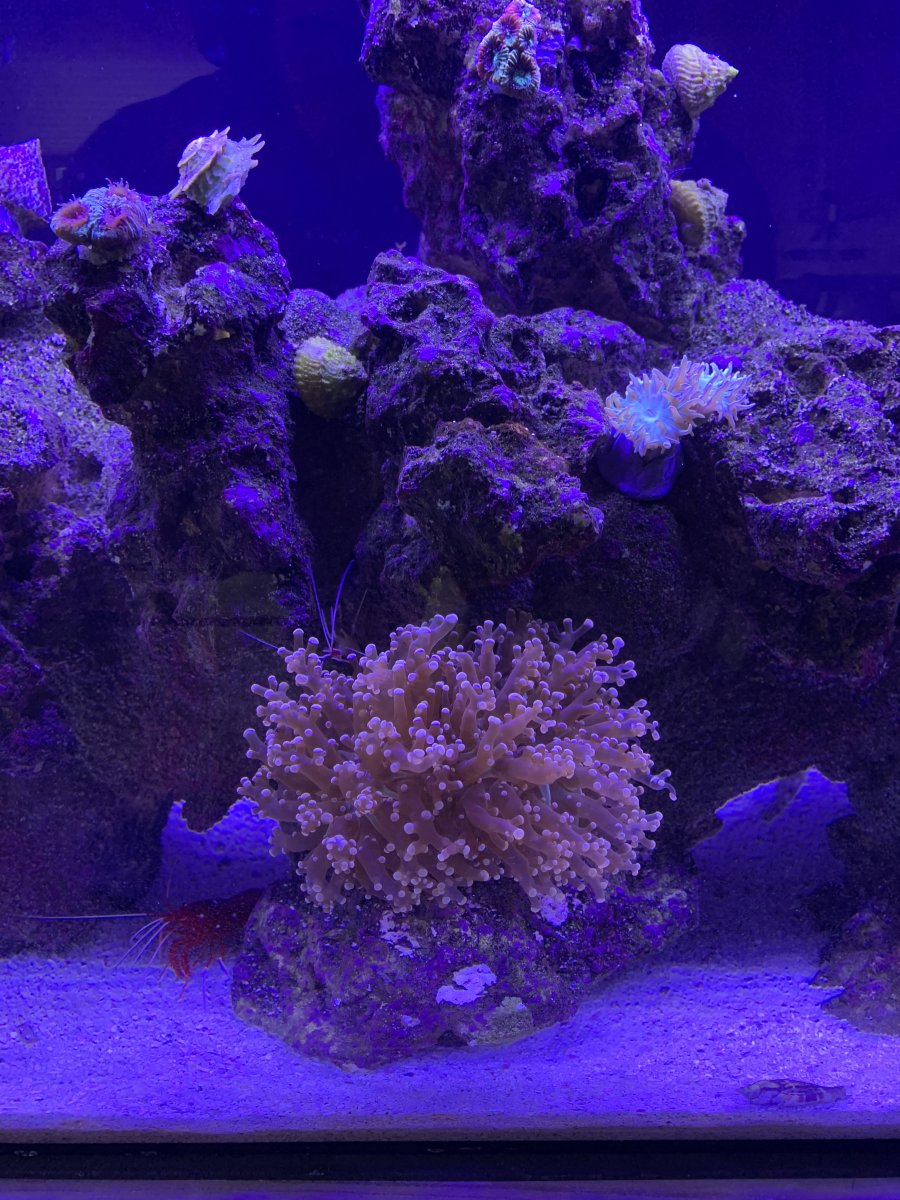 Sun Coral: I hope he opens up more soon 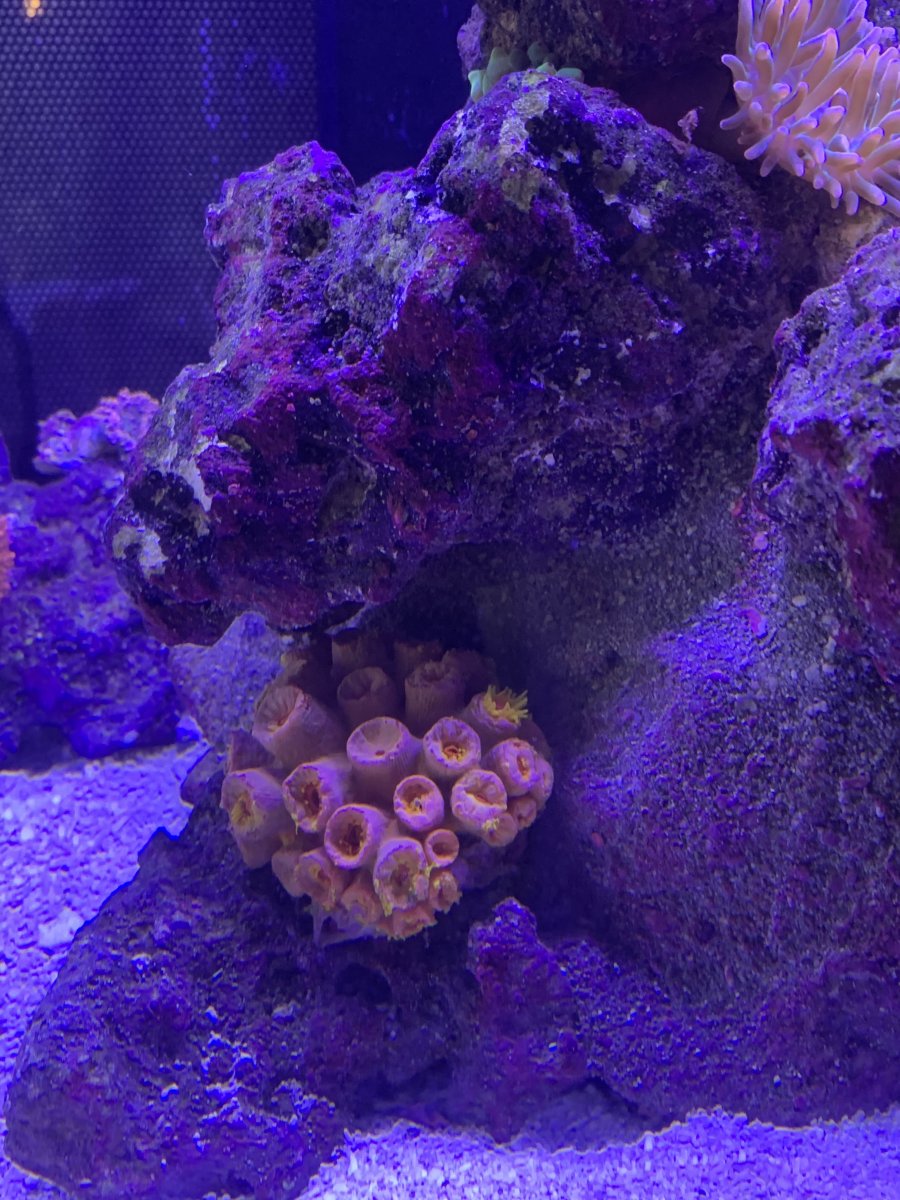 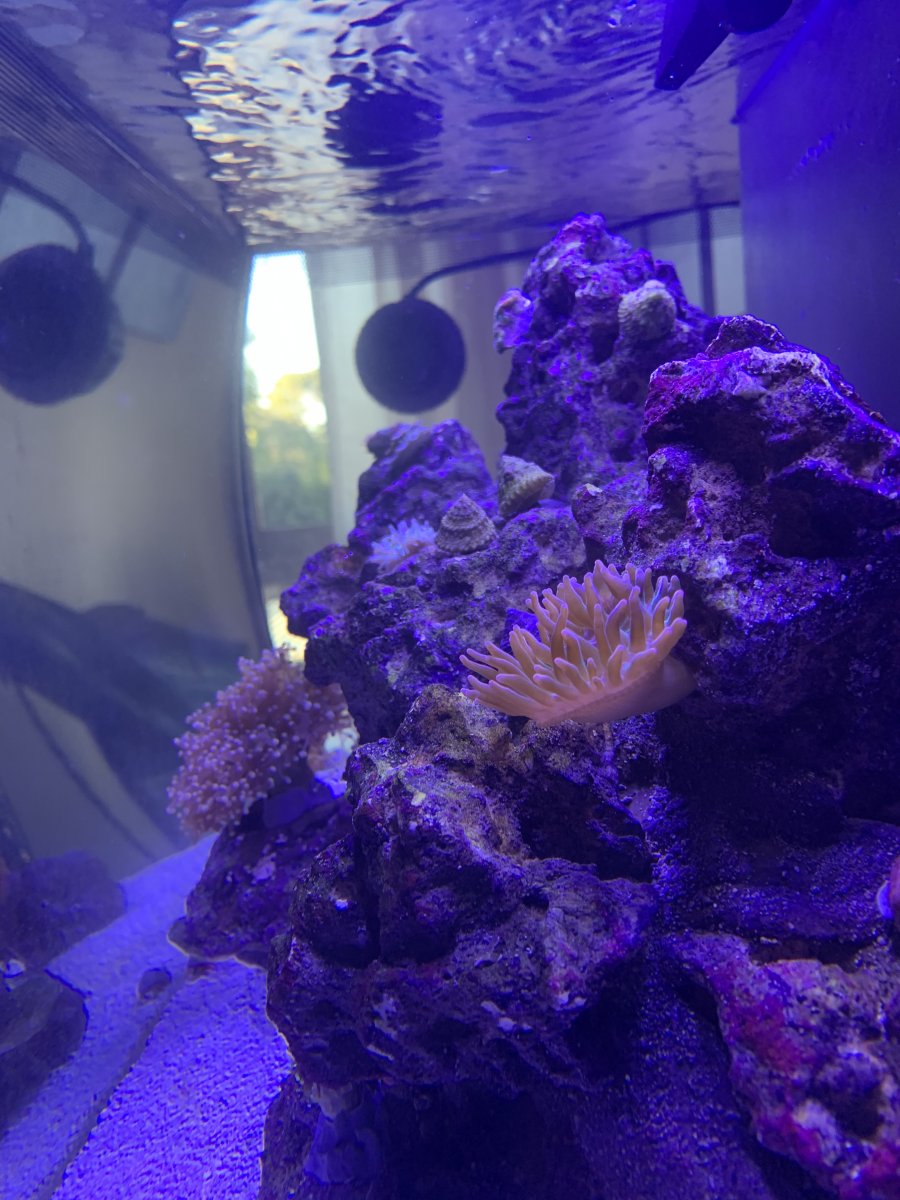 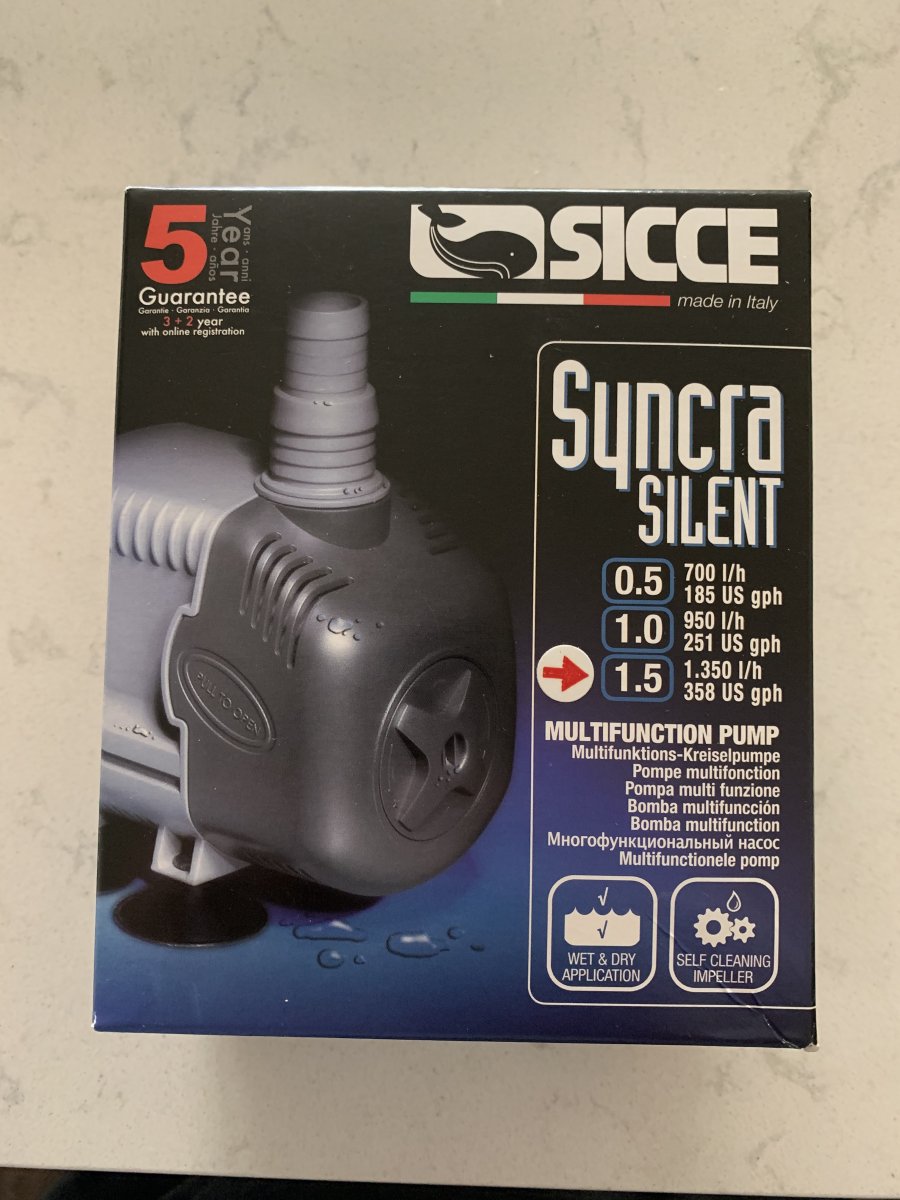 Thank You @802ScubaFish for the help and recommendation on adding the return pump! Link below! 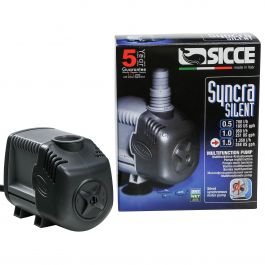 Why does BRS recommend this? The Syncra Silent line of pumps come in many different sizes and will fit most tank needs. Sicce uses high quality magnets in their pumps, which allows them to spin smoother with less noise than almost all other pumps in their price category. If your tank needs a...

I have the same one, works much better than the stock.