The journey to this tank started years ago. I have my dad to thank for my love of aquariums. I was in 3rd grade when I set up my first tank. A 29 that my dad wasn't using, filled with fresh water, a tadpole, a crayfish, a bluegill and some minnows from the river at the local park.

He always had beautiful freshwater tanks with pretty angelfish and live plants, and I would get lost watching them.

I remember early on having an immense desire to learn everything i could to take care of each species i owned.

As the years went on i moved into tropical freshwater fish and began breeding easy species such as swordtails, guppies, mollies by the time I was 10 or 11.

Ironically about this time my dads passion for fish was coming to an end. And i quickly picked up pace.

In high school I worked for a pet store. Easy access to at cost equipment grew my hobby in aquatics and small animals. I quickly went to saltwater, owned and bred lizards and snakes, birds, and amphibians. My bedroom was wall to wall aquariums and cages.

When I went off to college my mother became the zoo keeper. I was 2 hours away at school and came down on weekends and breaks when I could, but it quickly became apparent my zoo needed to become much smaller.

I set up a 26 gallon bow front reef in my dorm room, and... an extra large Rubbermaid stock tank that housed a shark that I hatched from an egg. I quickly became known as Fish... the name has stuck to today and I answer to Fishy now.

After leaving school the addiction continued and i set up a local reef club, did tank maintenance on the side, and bred some basic saltwater fish like clowns and cardinals. I loved fragging and swapping corals, and had a large system in my garage.

One of my favorite memories was a tour of the facilities of Newport Aquarium in Newport Kentucky shortly after they opened with my reef club. The grand aspirations i had after coming home can't be described.

Most recently I've been out of the hobby, life changes, children, marriage, and divorce have shaped my life, moves and career changes. But I have the itch again.

I find myself looking for a house to buy and one of the deciding factors is how much room do I have for a tank and hopefully a fish room.

I have begun research on my dream build. Or one of them. A custom acrylic mixed reef. The tank will measure 72 inches long, 30 inches wide, and 24 inches deep. Ive already started to purchase equipment and i have an estimate on the tank i designed from glasscages.com. Shout out to @Joe Glass Cages.

So many things have changed since I was in the hobby, the vast amount of information is overwhelming. I hope to provide some insight into my journey in this thread. And hopefully inspire some people to think outside of the box and question what is commonly accepted as mainstream.

I also hope to inspire additional new reefers like my best friend @cmiller5617 who now has the dreaded saltwater virus. She has thrown fuel on the fire by deciding to jump right in and purchase a tank too. Her tank will be what keeps me going until I can set up mine.

This thread will chronicle the QT setup we have, the set up of her 75 gallon reef ready tank featuring her favorite fish a toby puffer and eventually my 225.

This is the amazing deal @cmiller5617 got on her 75 gallon set up. Great deals on good starter equipment are available. It takes being patient and searching multiple places to find them.

Knowing what will get you started while you learn and what you have to spend are important.

This 75 gallon set up will get her going for less than $800 total spent. A huge steal when you calculate what she could have spent. 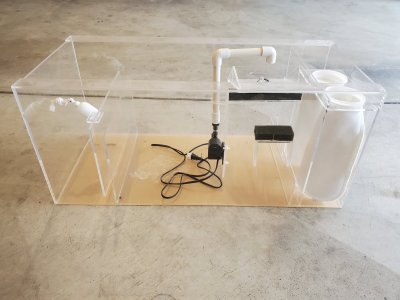 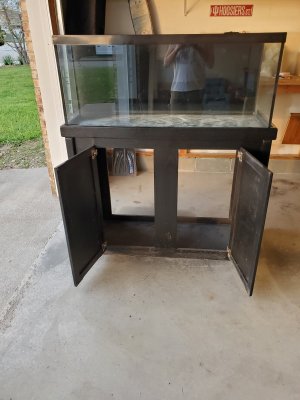 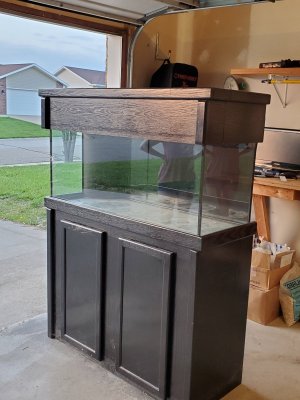 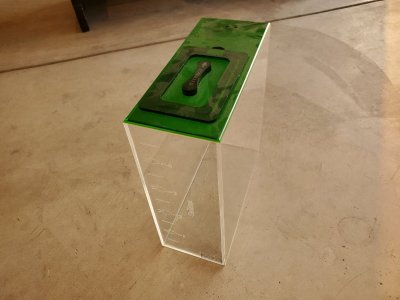 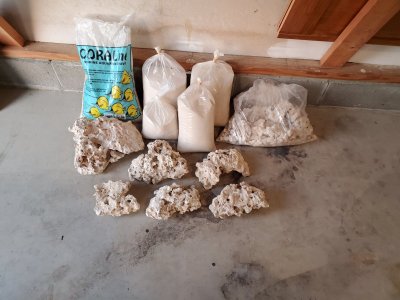 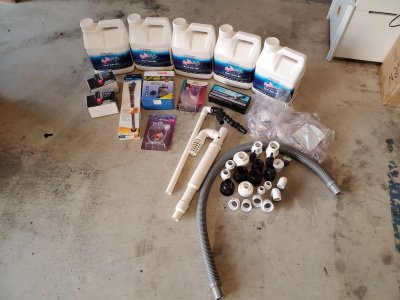 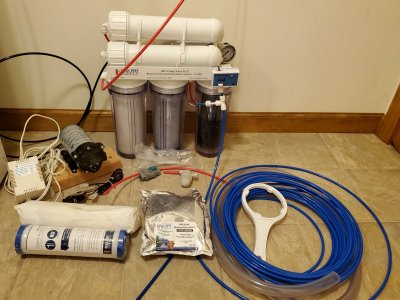 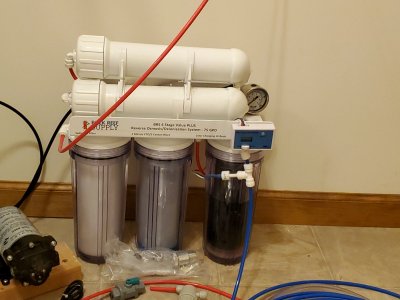 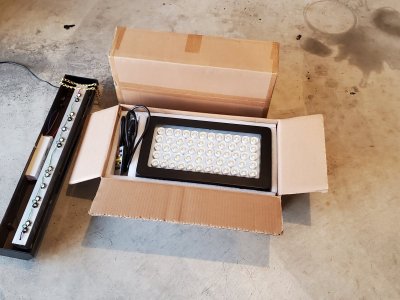 My gift to her courtesy of @david_ma a reef octopus 110int. Thanks David for a great peice of equipment. Cleaned up great and runs like a champ. 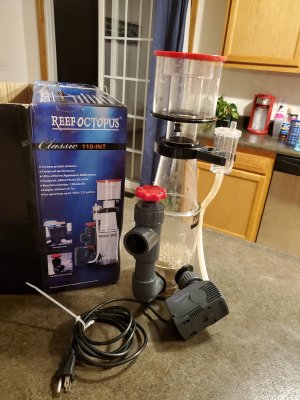 @Fishy65 - it looks like you have a lot of nice things coming together! I have also have a Reef Octopus 110INT and am very happy with it! Keep up the good work!

Build thread update: Set up a QT tank for @cmiller5617 75 gallon build. Used an all in one QT tank kit that was bought at Saltwateraquarium.com. Here is a link to the product. 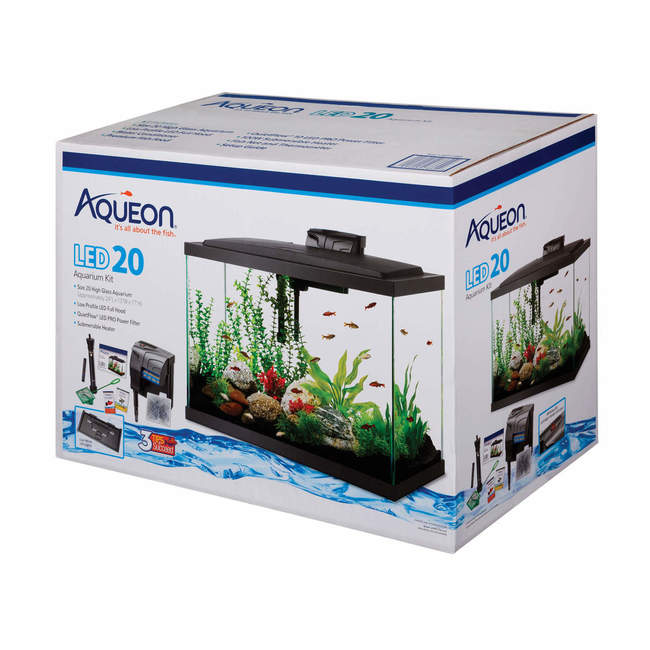 First impressions of the set up are that it is nice to have a starter kit all in one. I stress that it is a starter kit and there should be additional items that every reefer buys for a QT. It comes with the majority of the basics for a QT tank and the price point is good.

Shipping was fast, and the packaging was excellent.

One thing I worry about are the LEDs that are built into the top. I will post a pic of them tomorrow. With the design of the top sitting inside the edge of the tank, the LEDs will quickly become corroded due to the salt environment.

The second thing I worry about is that the top fits inside of the frame. Meaning that if you were to tilt it just right, the whole thing can fit inside the tank and potentially sink to the bottom. This is even how it was shipped.

Here is the tank set up on a stand we built out of 2x4s. 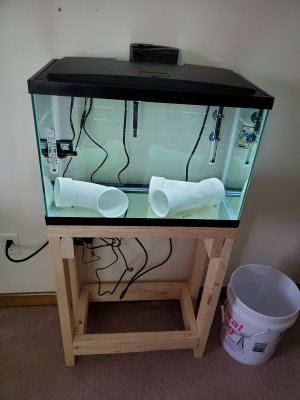 took a few days but here are pics of the lid for this all in one qt. Like I said before the top fits on the inner lip of the frame of the tank and can easily fall in. The LEDS are to bright for a qt in my opinion, and the placement to me means they will corrode quickly. 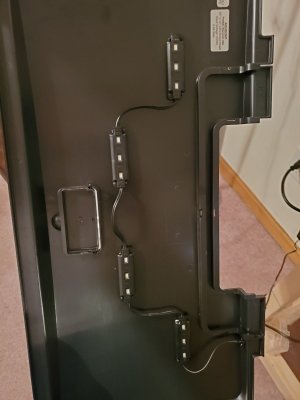 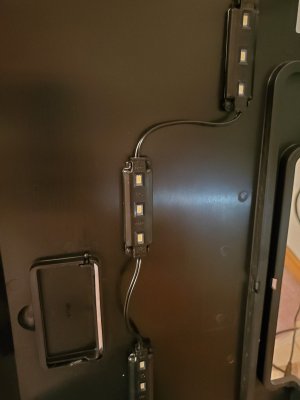 Updates.... we are done with the initial plumbing on @cmiller5617 75 gallon tank. The overflow return situation is a nightmare on these "reef ready" tanks. We've taken the 2 holes in the overflow and made them both herbie style drains. The main drain is the smaller 3/4 inch pipe and the emergency is the larger 1 inch pipe. Both drains are straight down to the sump and the main drain is controlled with a valve.. This isn't the most ideal but its better than a single durso style drain. The return we have plumbed up over the back of the tank. Depending on how the overflow handles the flow, the intent is to swap out the current return pump. 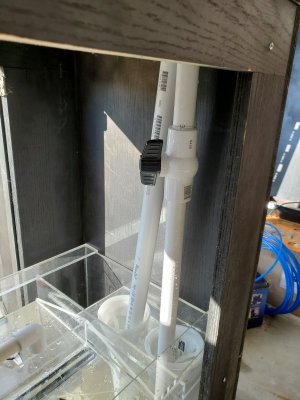 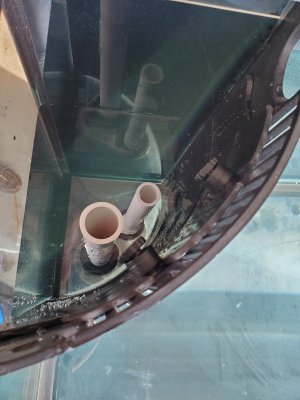 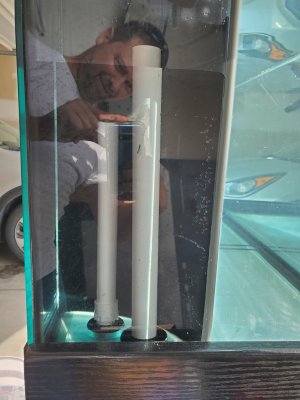 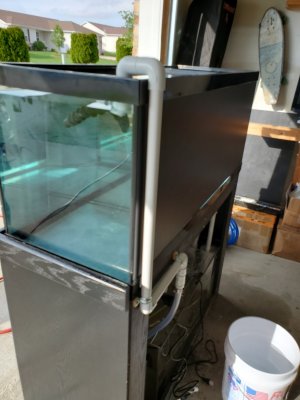 All of the plumbing and water checks came out great on @cmiller5617 75 gallon. We simulated a power outage about a dozen times, and made sure the drains could handle anything. Tank is now inside and full of saltwater. Today is day 1 of cycle. Dropped some Dr. Tims in there and have it cycling through. Additional live rock should go in this week. First fish of the tank will arrive Thursday. One blue spot puffer. It will go into QT for a nice round of tlc... once the tank is cycled and the puffer is ready, it will be the first in. Here is the tank with the royal blues on at the lowest possible level.... (its nighttime) 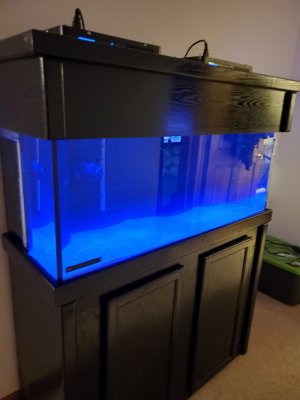 Update time. Used a combination of live rock and dry rock to cycle the tank. Mini cycle came and went quickly. Tank has been stable for last 2 weeks and a small clean up crew was added today. Below is a pic of @cmiller5617 75 gallon. We have 2 x20 gallon QT tanks and the first inhabitants of QT are a small pair of black ocelaris. They look so tiny in the tank all by themselves. 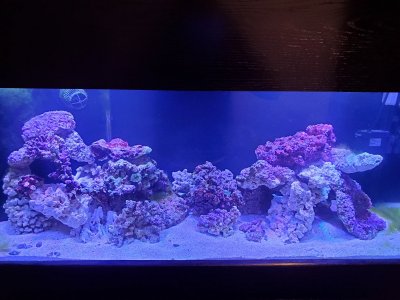 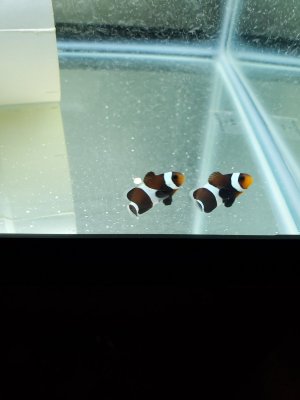 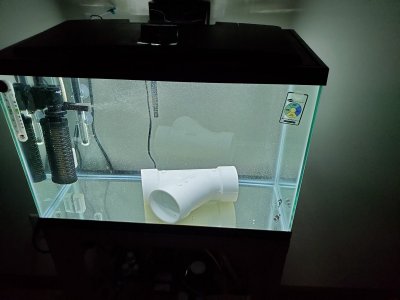 Blue spot puffer we had on order from @LiveAquaria never came through... we were on the email when in stock list, placed the order as soon as we were notified, even received confirmation, then went days without hearing anything. never received additional information or shipping confirmation. We just canceled the order. Our LFS in Indy will be ordering us one... Will end up being a better deal anyways because shipping is so much when not ordering enough $$ in livestock...
OP

Quick update... the clowns did not make it in QT. They were so small and apparently the LFS that we purchased from had a rough go with this group. We contacted them just to see if they would do anything about them, as there was no warranty, and they gave us full in store credit. I have nothing but good things to say about the guys at The Reef in Indianapolis. They went above and beyond.
OP 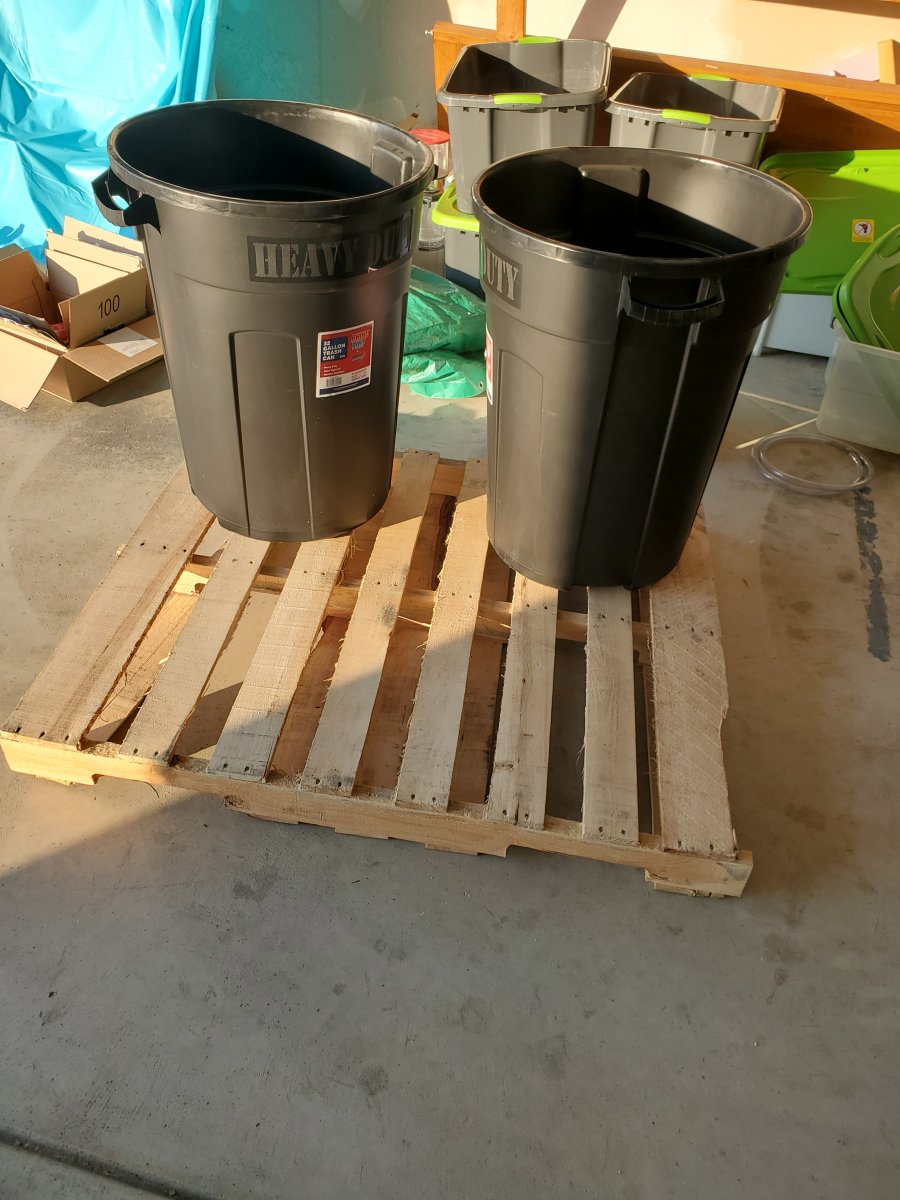 First thing first, cut the pallets down one side of the middle brace. 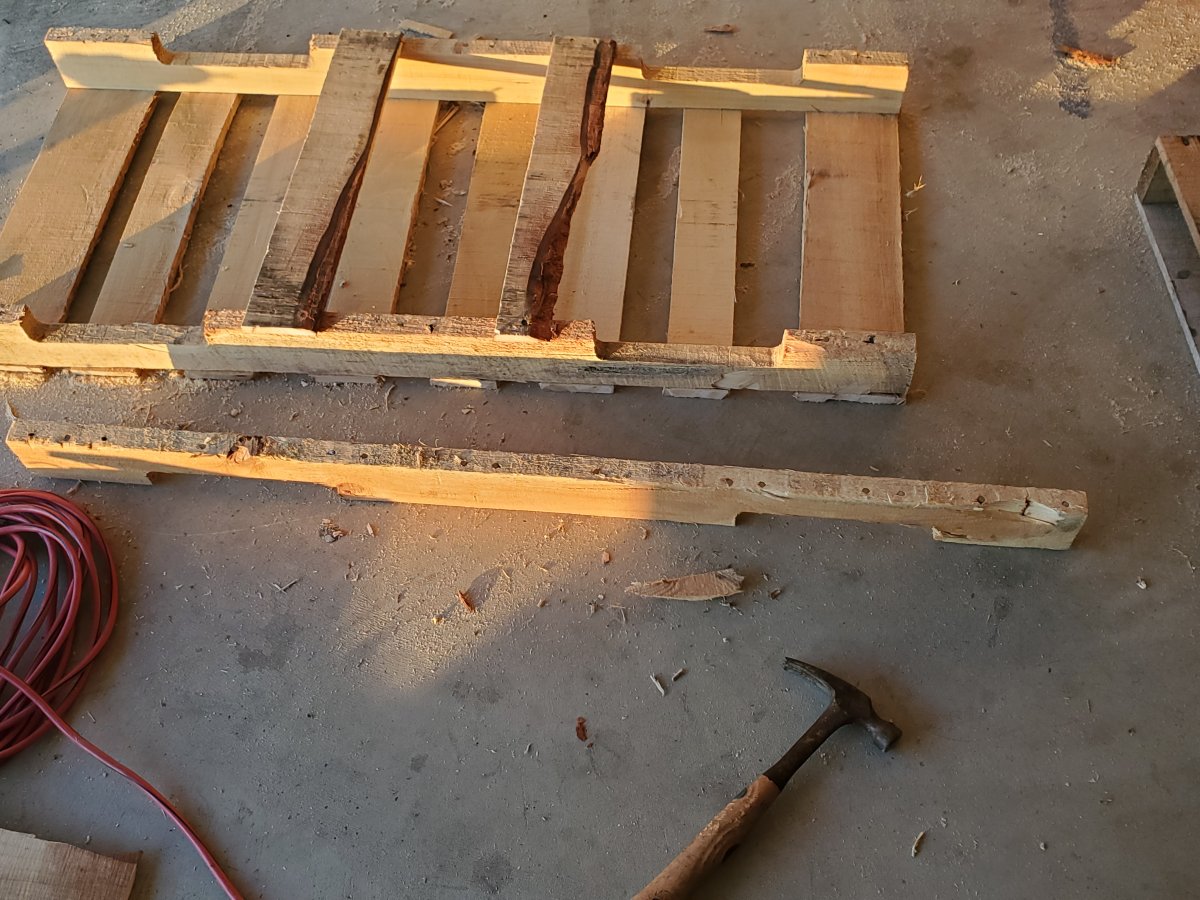 Next put the brace you cut off down the middle of the 1/2 pallet. 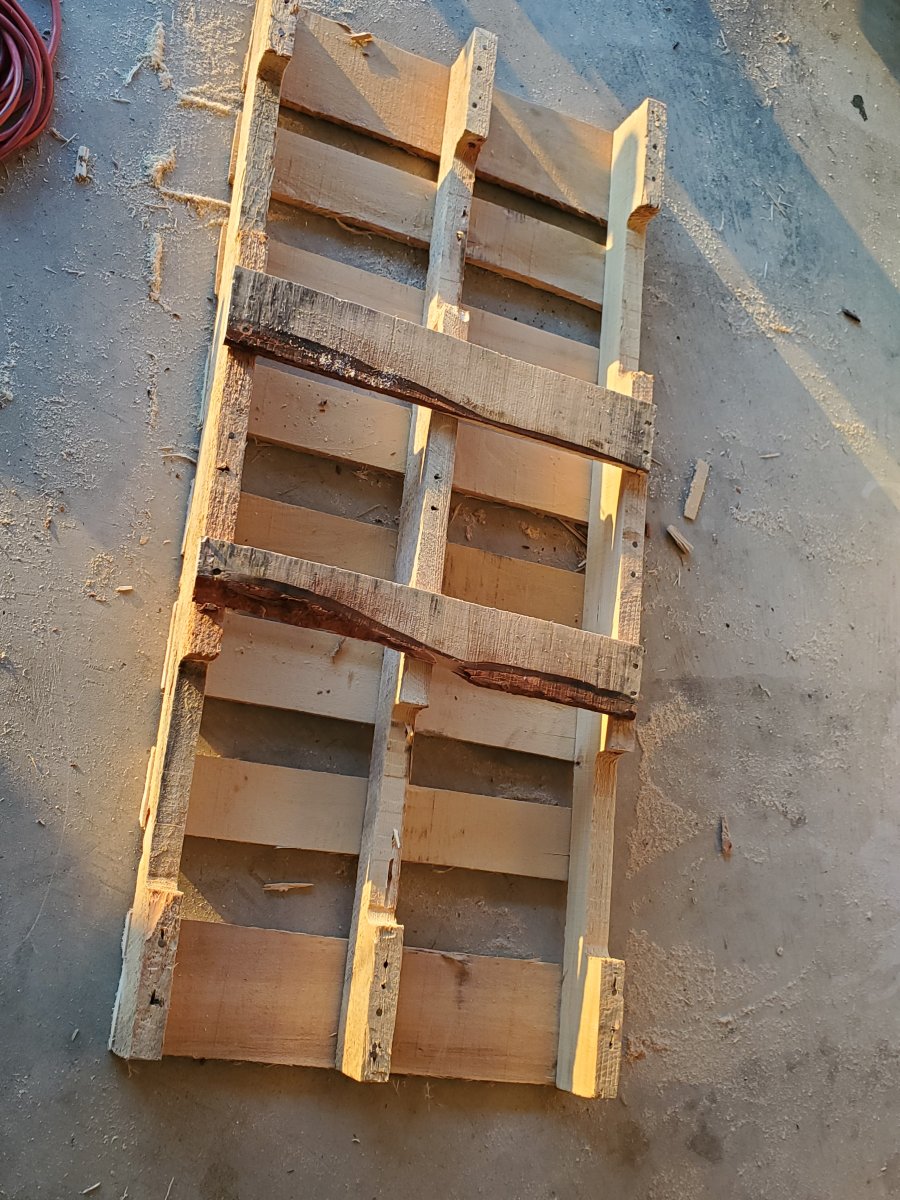 Next, take a 2nd pallet and cut it down one side of the center brace.
Once thats done cut it in 3rds so that you now have the legs for the stand. I chose 15 inches for mine. When added to the height of the base, it will be very easy to put a 5 gallon bucket under the outlet. 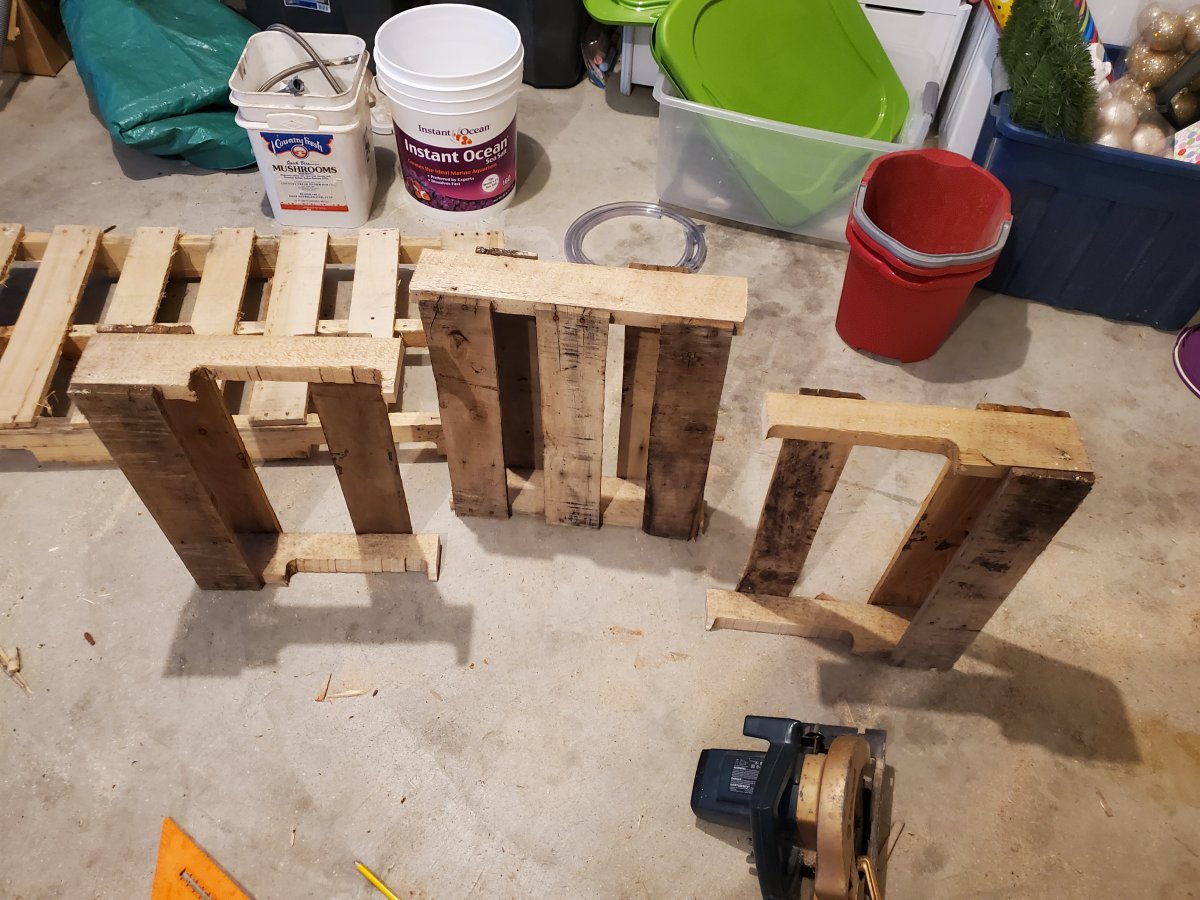 Attach the legs on the ends and the middle. I chose to use the scraps to make brackets to attach everything and some diagonal braces. 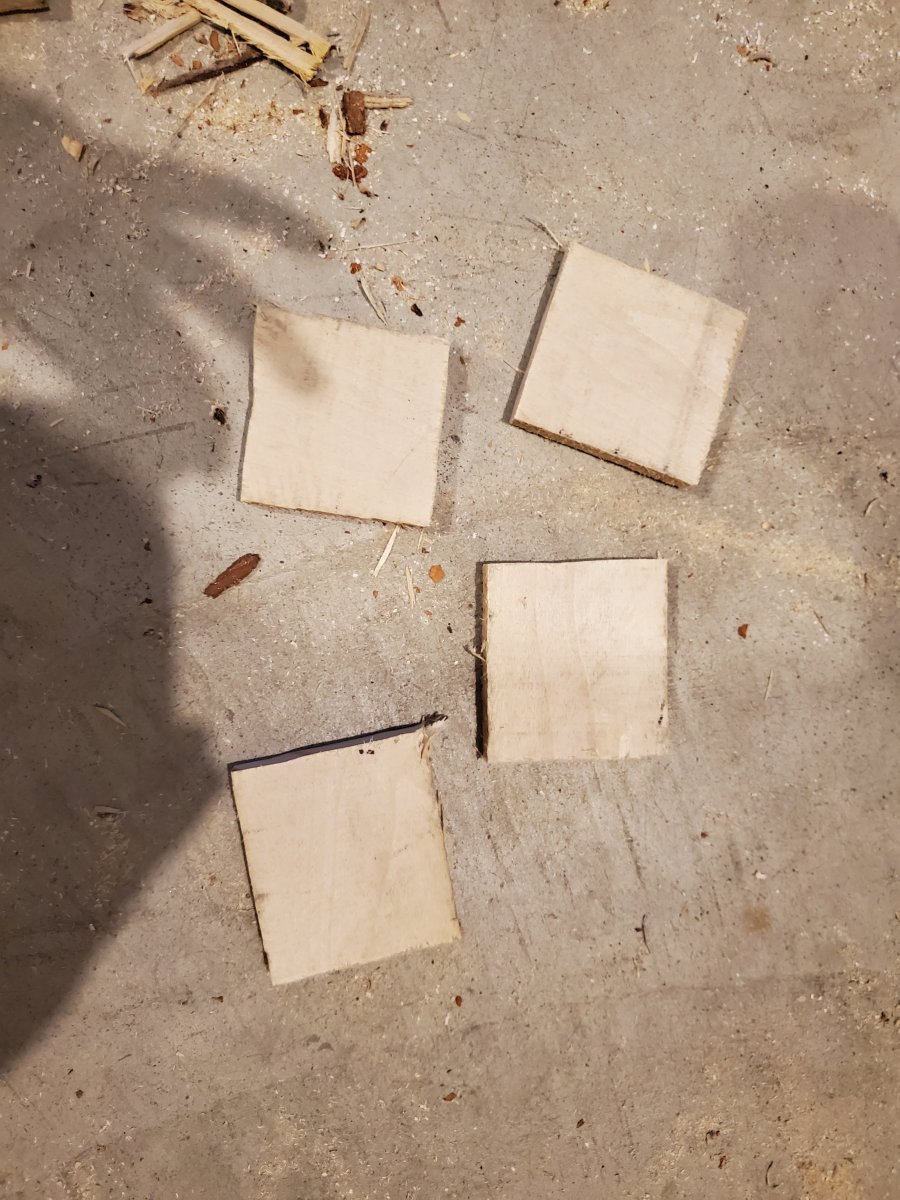 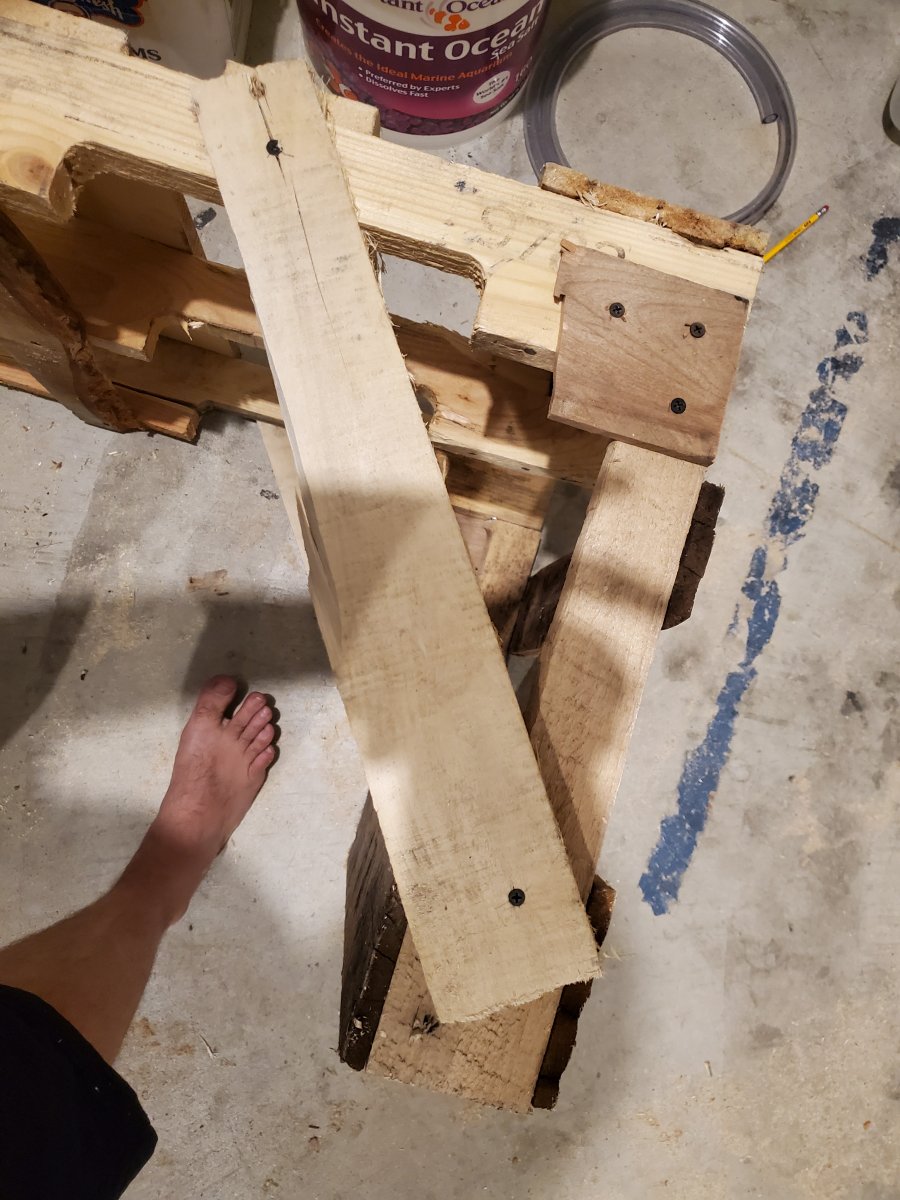 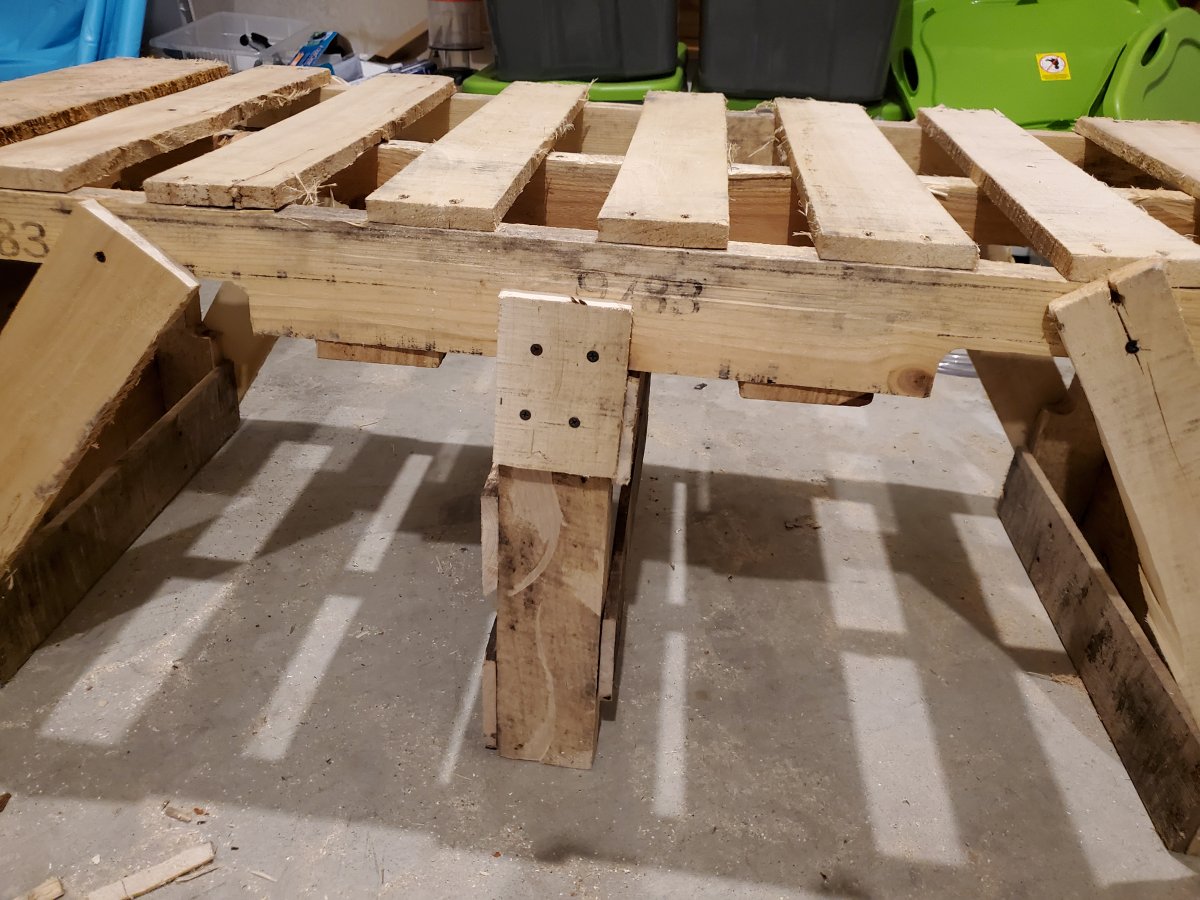 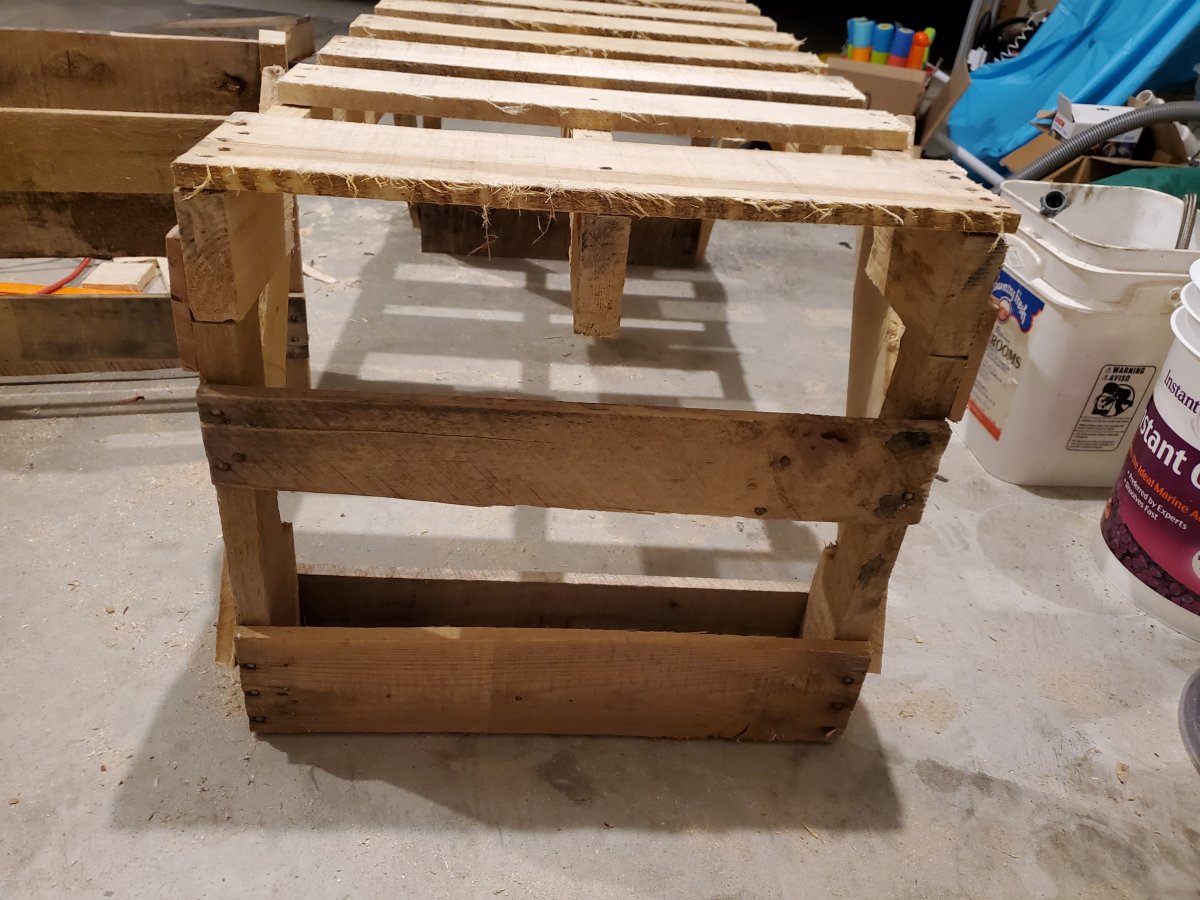 I stood on, jumped on, and rocked back and forth on the stand. It held great and barely moved.
OP

I meet with the builders of my house in 1 week. I wonder if they have ever had anyone do a "fishroom" before. And i wonder if they are going to find it strange when i ask them to leave a big hole in the living room wall.... im so excited. I dont care about counter tops, carpet choices, fancy molding... the one room in the house i truly care about is the fish room.
Last edited: Jun 20, 2020