Hey everyone! My water parameters have been fluctuating a lot over the past few weeks. I started my tank (25gal AIO) in late September of 2020. Added dry sand and 15lbs of Liferock from CaribSea. I read that the Liferock has dormant bacteria, so I let my tank run until January and then I dosed a bottle of Turbostart.

I had the ammonia spike and that dropped, followed by a nitrite spike and that fell as well. My nitrates went up and after January 10th, I added two zebra crabs and two trochus snails because algae was growing in my tank. Nitrites were low and I added a maroon clown and another zebra crab and trochus snail to the tank on January 24th as my parameters seemed fine. My nitrites have been steadily going up week after week and I’ve been getting minuscule amounts of ammonia in my weekly water testing. I’ve been doing weekly water changes for the last four weeks since I added my maroon clown and my test kits are all from Red Sea. I test on Saturday’s and do water changes on Sunday’s. You can see my water testing history in the photos I uploaded.

This doesn’t seem normal to me as I’ve been told this isn’t really supposed to happen once a cycle is completed. Ammonia and nitrites are supposed to be zero while nitrates rise and fall with water changes and such. What’s happening with my tank? My maroon clown and CUC seem fine and they’re all eating and acting normal. I’m just concerned that my ammonia and nitrite levels keep going up. If anyone has any advice, I would really appreciate it. I don’t want to let this get out of hand and lose my maroon clown! Thanks in advance everyone! 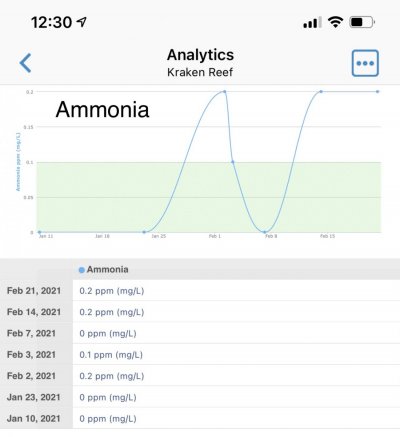 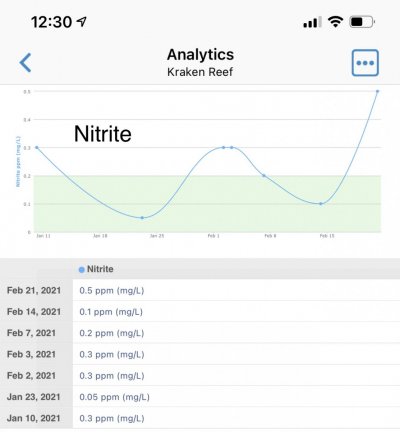 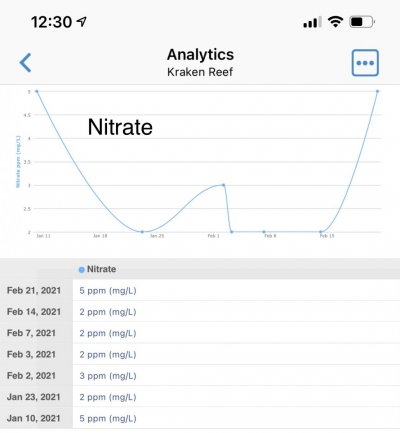 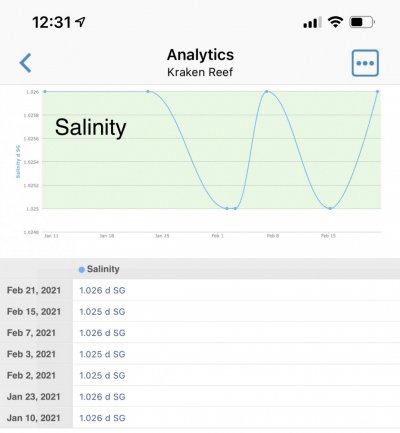 Everytime you add new livestock the tank has to adjust to a new bioload try to space out new additions to me it looks like small spikes from new additions. Disclaimer though ive only been in the hobby 6 years or so, so id get some more opinions.

The nitrite (if real) is interfering with the nitrate test results, making them falsely high.

Ammonia is typically the main concern, but your values may all be testing noise, rather than real test results.
OP

Randy Holmes-Farley said:
The nitrite (if real) is interfering with the nitrate test results, making them falsely high.

Ammonia is typically the main concern, but your values may all be testing noise, rather than real test results.
Click to expand...

Thanks for your input! I’ve ordered a bottle of Turbostart to help bring them down, if there is any according to you. My fish and CUC seem fine and unaffected at the moment, so I’m just going day by day until the Turbostart arrives. I plan on adding another box of Marinepure Gems to boost the biological filtration a bit and it’s almost time to switch out my bag of Chemipure too.

FWIW, nitrite is not toxic in marine systems, so is not a concern. The issue is just in interpreting nitrate test results.

Readings during a Cycle. 0 no2

What Could Cause These High Parameters?

A
Tank parameters not quite right