crabs_mcjones said:
This is unrelated to the thread but is it bad to leave your skimmer run 24/7? I don't ever turn mine off, but should I be?
Click to expand...

crabs_mcjones said:
This is unrelated to the thread but is it bad to leave your skimmer run 24/7? I don't ever turn mine off, but should I be?
Click to expand...

I wouldn't shut it off at night. Night is when you most want the aeration to keep up O2 and minimize a low pH minimum.

Randy Holmes-Farley said:
I wouldn't shut it off at night. Night is when you most want the aeration to keep up O2 and minimize a low pH minimum.
Click to expand...

Randy Holmes-Farley said:
Is that an observation of yours or something you read?
Click to expand...

no used to leave it off at night aswell kept having phantom ammonia on badges (so now I don't use them or trust them). But then I turned it off for the night and tested it the day after BINGO found my ammonia source
Hob don't work like traditional in-sump skimmers that have a filter sock blocking heavy debris that a skimmer can't get up the tube .
In a hob that heavy stuffs goes right to the bottom and collects some nasty stuff. two ways of getting it clean simple way is to take it out one amonth or just take a small siphon.
anyway this was my XP and I was hoping I could help someone else out
simple way is to test the skimmer just prior to turning it on

Someone take some skimmate, hydrate it a bit, and post it's ammonia reading

It's important to test a range, immediate sample vs 48 hours bubbled

If it's APi the standard equation is .25=0 of course


Post a diluted reading then let the sample sit for 48 hours and keep it bubbled, say in a jar or something. Replicate the marine environment we're testing the claim in/

This is much less dilution than in a reef tank, do don't overdo the sample. Reduce some down to lightwater then post current / 48 we'll get an ammonia profile worst case scenario.

Tanks where skimmers begin to fail due to nonadjustment or something came off line during vacation aren't associated with sustained ammonia spikes, the trending is worth considering imo.

We don't find tanks registering ammonia when they modulate skimming, my tank hasn't used one ever? I guess with a large fish bioload perhaps, post

Try to find other threads on it just to check trends, this is where I like Google.

Is neat to see trending in what we see in our tanks, I really like it for that aspect


Currently I wouldn't vote that you had free ammonia. test drift

We could trace out the issue if you have a thread you made on it at the time. If there is no thread, we should be able to literally model it in portion real quick to see.

100% good idea we should make this thread about verifying ammonia dynamics in part or in whole.

In the end, we're verifying what bacteria can do, not as much ammonia imo

To state that existing active surface area cannot process a given bioload without the assistance of a skimmer, and that not enough ammonia generated to wipe out the tank but just enough to register a small spike, is to make a bacterial statement so it's highly interesting.

We know from myriad cycling threads online that a cycled reef tank, without a skimmer, can oxidize well over 4+ ppm ammonia in 24 hours

The diluted immediate salifert skimmate test needs to be about that rough. The 48 hour one, triple.

My vote would be any system displaying that fine balance just outside of total notification has no rock, and no sand

Key terms stand out there again. The search results I see at least don't show strong ties in the matter. Not saying yours is for sure unrelated, but early trend checking isn't landslide and people have skimmer issues all the time. I press like this to learn/how deep one can clean a reef tank is also affected by what bacteria do so it's worthy to know these bounds.

I do not think one can analyze skimmate and make exact conclusions about what it removed or didn't remove because skimmate is changing as it sits there.

Ammonia is not skimmed out, but skimmate may contain ammonia from bacteria in it metabolizing organics.
OP

Hey there everyone! Happy Sunday! So I conducted a test this weekend and have come to the conclusion that the Protein Skimmer is causing the ammonia in my tank.

Since I only run my protein skimmer during the day, and not at night I tested the water that sits in the protein during night, this is where the ammonia is coming from.

I have a reef octopus 1000 classic hang on back, apparently there is water that sits in the protein once it turned off. The water that sits over night develops ammonia because its not moving.

I have removed the protein skimmer and have on craigslist for sale. I will need to purchase a better one that isn't so loud

Thank you everyone for all of you help regarding this issue! Its been corrected!
Thanks again! 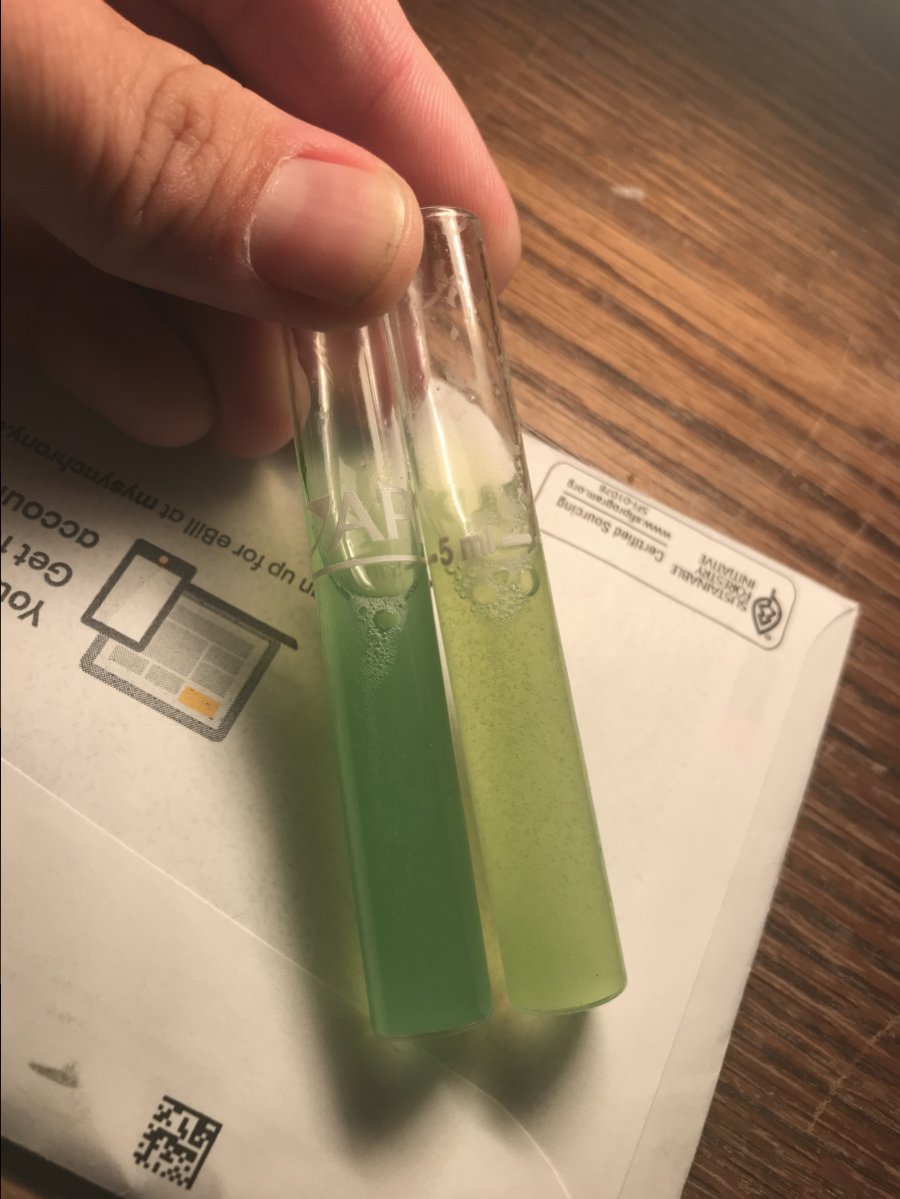 IMO, it is typically a bad plan to shut off any device that has water trapped in it, then restart it later without flushing it. Ammonia is not unexpected, but probably isn't even the worst possible problem. Hydrogen sulfide is even more more toxic and can easily be generated in stagnant reef aquarium water from the anaerobic breakdown of organics.

To me it's not case closed yet

I'm reading the cause claimed for those two tanks .25/APi is simple nonremoval of that sludge, how does cup testing skimmate not reflect on that

The inference is that it's ammonia charged instantly, claimed test reading spike isn't delaying 48 hours to register that .25

If the breakdown or continually sitting there in water test of diluted skimmate yielded no ammonia initially, or after aerobic digestion allowance for any removed whole proteins, that would be significant to me in ruling it out as something that spiked their ammonia within 12 hours.

Both those tests above are .25 I have not seen a clear yellow or purple posted yet. Some swirled diluted skimmate should go purple between now and Tuesday we could close the case pretty quick.
Last edited: Oct 16, 2017

made my day ^ hope u all had a great week
OP

zuri said:
made my day ^ hope u all had a great week
Click to expand...

Lol awe! I hope you do as well! Thanks again for your help!

Oceanwave45 said:
I have removed the protein skimmer and have on craigslist for sale. I will need to purchase a better one that isn't so loud
Click to expand...

You could always just try running your system without a protein skimmer and see how it reacts. You may find that you can keep up with your DOC's through water changes.

I would add an air stone and pump to your system to improve air exchange.
OP

I never used a protein skimmer for the first five month! Yes I did a few water issues but that was mainly because me making a mistake.

However, since I have removed the protein skimmer my water is testing fine.

Zero ammonia and everything else is within normal levels.