Put them in a styrofoam container. Small ice pack change it daily. I keep mine in my workshop on my workbench and it probably gets about 80 degrees, No problem yet.

Here is a pic of what is in my culture. It looks like rice. Is this a problem? I even found an earth worm in there yesterday when I was digging around.

Flood that culture. Those mites should float and keep pouring it off. The worms will sink and they can live underwater for 5 days so don't worry about drowning them. Sometimes I leave mine underwater over night with a small trickle of water going into the container.

GeoSquid said:
I started a white worm culture about a month ago and I had an explosion of these tiny white things. what are they?
Click to expand...

Paul B said:
Flood that culture. Those mites should float and keep pouring it off. The worms will sink and they can live underwater for 5 days so don't worry about drowning them. Sometimes I leave mine underwater over night with a small trickle of water going into the container.
Click to expand...

Thank you! I will definitely give that a try. Can you just use tap water or do you need rodi? We have a lot of chlorine in the water here. These things just exploded in a couple days.
J

Paul B said:
Put them in a styrofoam container. Small ice pack change it daily. I keep mine in my workshop on my workbench and it probably gets about 80 degrees, No problem yet.
Click to expand...

How often can you feed your fish white worms. I started this culture and now the white worms have exploded. I feel they will out populate the container very soon. I've been feeding them to the fish about 2~3 days a week, maybe a hundred worms at each feeding. Can I increase feedings to the fish? I don't want to overdo it as this is not a natural food for them. The fish do love them - the worms don't even get a chance to the hit the bottom.

To collect them, I added a piece of a plastic water bottle and place Nori in the bottom of it and wet it. Within an hour it's full of worms.

I personally would not feed them more than 3 times a week. Other foods are more nutritious and I use the worms mainly for the living bacteria. I would feed clams or LRS food other days.

Paul B said:
IMO worms are about the best food you can feed along with clams. These foods contain bacteria "That our fish need" to stay healthy along with the fats, minerals and everything else to keep them healthy.
I hear all the time that worms are to hard to keep and they have to be kept cool. No, they don't, they want to be kept in the same temperature you live in. If you live in Death Valley and you have no AC, internet or fresh water, move.

For the rest of you that live on a volcano and the lava laps at your front door,
Can't you get a cheap Styrofoam cooler, put the worms in there with a small freezer pack and change it once a day? Suspend the freezer pack so the worms don't crawl on it. I mean Really!

Your fish don't really care if you have to go a little out of your way, especially after they were sitting there, or rather floating there, minding their own business and some Jiboni in a canoe listening to RAP music jumped near them with a huge net from Walmart and scooped them up. Ate most of them, sold some to a market that puts them in a can labeled "Dolphin Safe", and threw the rest in a bucket that he hauls gas and salami sandwiches in to a wholesaler where they sit in the sun in a cement tub with floating Toyota tires for a week with no food, then they are put in a bag and shipped over 47 hours to a store where the guy throws them in a small tank and puts a sign on them that reads $49.95, two for $50.00, and no guarantee.

Then you come along and the guy puts them in a small bag that you keep them in for two hours while you eat at Bonefish Grill. After that you throw them in an observation tank, because they haven't been observed enough, then dip them in insect repellent, tarter sauce and gasoline to remove flukes and flounders. Then quarantine them for 6 months while feeding them expired flakes.
Lady GaGa wears a fluke dress and no one dipped her.
And you have the nerve to complain that you can't find a place to store a couple of worms.

Then you wonder why you are constantly on the disease forum with sentences that always start out with the word "HELP".

The worms don't want to freeze, just be at room temperature like 71 or so like I want to live. Where do you guys live? Mars?
My worms are in a Tupperware tub in my workshop. It is hot in there now and I don't see them sweating.
I am fed up to here with excuses. My hand is under my chin. Just get with the program and your fish will live forever with no help from you. Stop bothering them and let them be.

Start a white worm culture. All you need is a Tupperwear tub like your wife stores her underwear in. Remove her underwear and tell her the cat ate them and use the tub. Make some holes in the top in case the worms want to breathe. Put in some wet "potting soil" not top soil, not saw dust, not real dust from your vacuum cleaner, not gravel or sand. Potting soil, preferably without fertilizer. Throw in the starter culture of worms that you Google. Put in half a slice of bread, I use grain bread but I think they would eat your socks. Put some full fatted yogurt on it and wait a couple of weeks. Your neighbors will be so impressed with how many worms you have, and how often your wife has to go and buy new underwear.

Feed them to your fish and they will live for almost 5 days in salt water so mandarins, crabs and almost everything else except pipefish will feast on them. You will never again have to go on a disease thread. 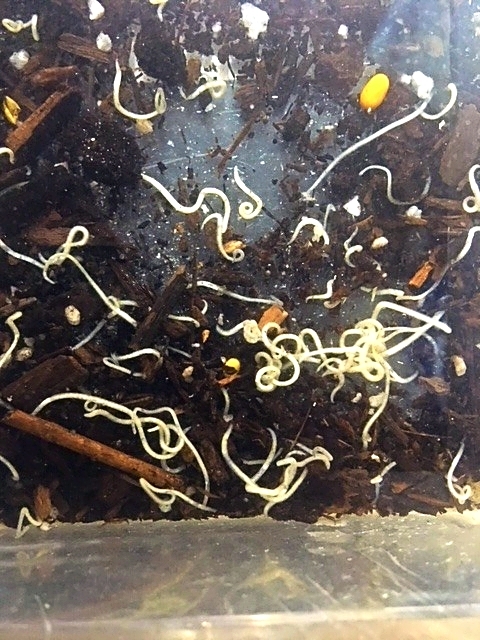 @Paul B constantly dropping knowledge that I need in my reefing handbook!

Thanks for once again such a killer thread Paul! Always love hearing from you.. consider you as a sensei of sorts for my systems since I was young!

Yah, that's what I figured. Thank you.

ReeferBlaine said:
. consider you as a sensei of sorts for my systems since I was young!
Click to expand...

How old are you?

Paul B said:
How old are you?
Click to expand...

27! And I have followed along for quite some time!

Paul B said:
How old are you?
Click to expand...

Paul B said:
I personally would not feed them more than 3 times a week. Other foods are more nutritious and I use the worms mainly for the living bacteria. I would feed clams or LRS food other days.
Click to expand...

Paul have you ever tried bloodworms? The type they sell for saltwater bait not the type from the Lfs.
OP

No but I have used sandworms also for bait. Bloodworms are nasty looking, besides I can't get them here.

I am sure almost any worms are great.

I agree completely with their nasty looks. Plus they have those jaws that shoot out to bite. Wouldn’t hurt me in the least to cut them up and feed the fish. Lol

Also, had to ask this question and kinda know the answer but no matter what I use for food, ie cat/dog food, bread with yogurt, yeast flakes, etc. all of it gets moldy. There's no getting around that as far as I see it. Natural progression for organic material in a moist, dark, warmish environment. What do people do with that material once it becomes moldy? Remove and replace with fresh, mix in and replace with fresh, leave it as is?

Paul told me to bury it under the soil and it worked like a charm.
OP

OK, part of the magic stew Just a bit stinky. And then just add in fresh food for the worms I presume.
S

I feed my white worms dry catfood a couple days before I want a big gob of them. I drop maybe a tablespoon of worms in that days phytoplankton along with some pellets to make a plankton substitute. It all swrills about the tank for hours feeding the fish all day.

After a few days, I'll harvest worms again, I won't get as many worms but still a fair amount. After that, the culture seems to go still until I feed again.