Historically, a pair of clownfish per tank has been the best way to successfully keep clownfish, especially more aggressive types like Maroons. However, there have been occurrences where reefkeepers successfully put together "harem" tanks, or circuses.

The first five were all introduced at the same time. The mocha gladiators were a bonded pair, but still small and young. All ordered from Sustainable Aquatics (the coral reef tn). The idea was that the hierarchy of female and alpha male are already established. I had a Vivid Fancy as well, but he was about 1.25" and the mocha gladiators started picking on him big time, so I removed him and sent him off to a good home within the second day. The last two I'm adding on Tuesday. They are from the same clutch as 4 and 5, so hopefully they'll be happy to be reunited.

If my theory is correct, the aggression for the top spot and alpha male won't be a big fight, so they'll settle in nicely. After removing the vivid fancy (1.25") all chasing stopped. 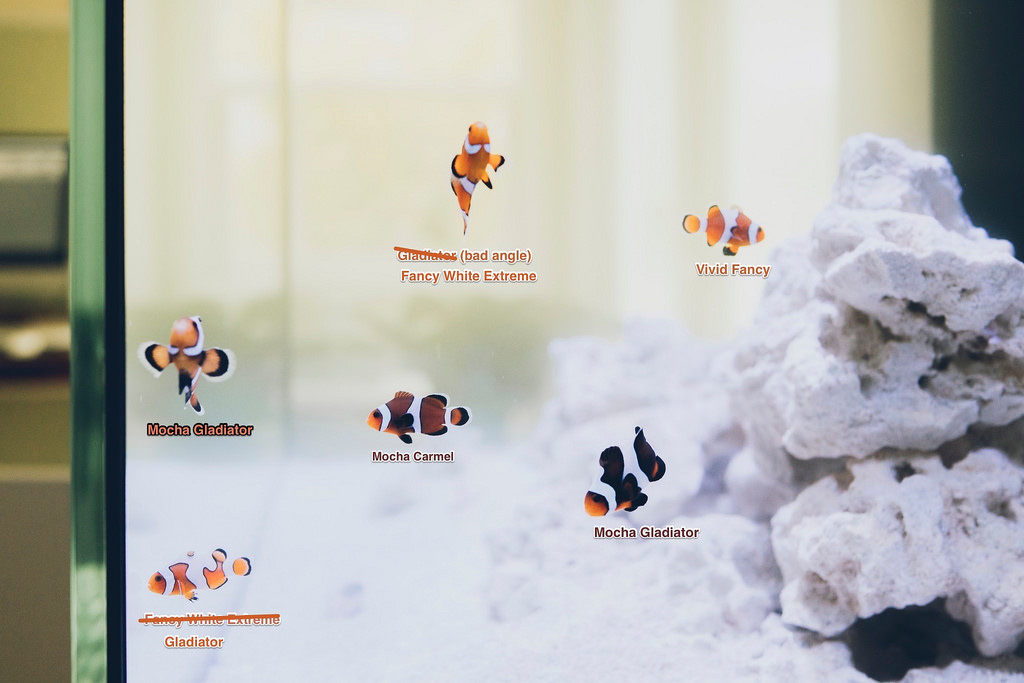 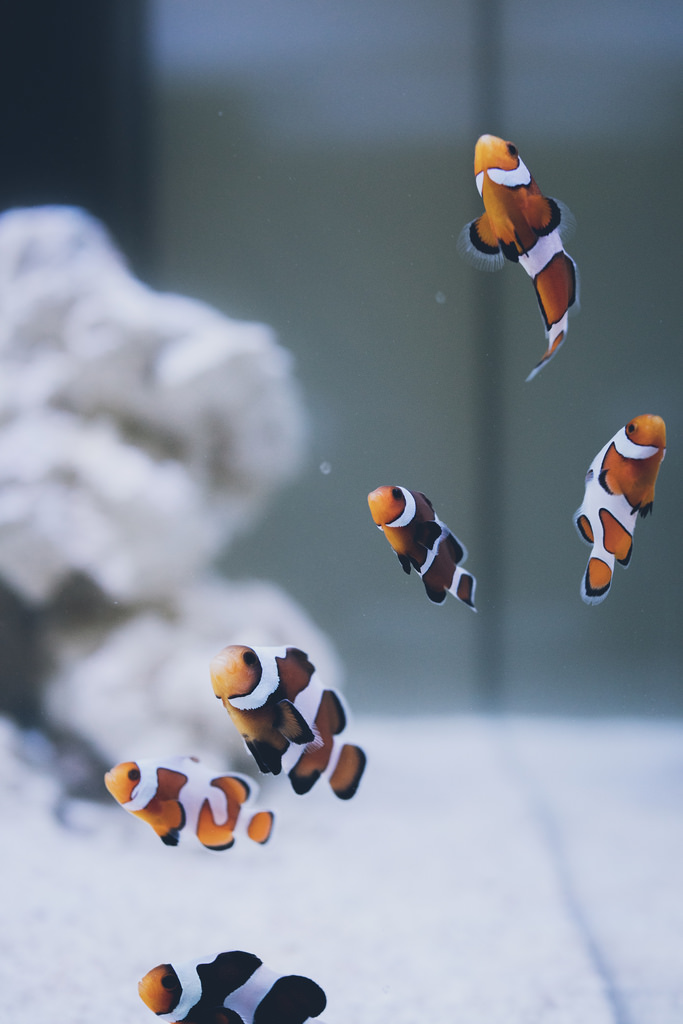 Rating - 0%
0   0   0
It sounds like I'm gonna be making an attempt at this at some point in the near future so I'm down to watch and keep notes on this business. 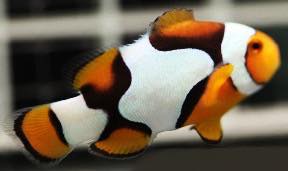 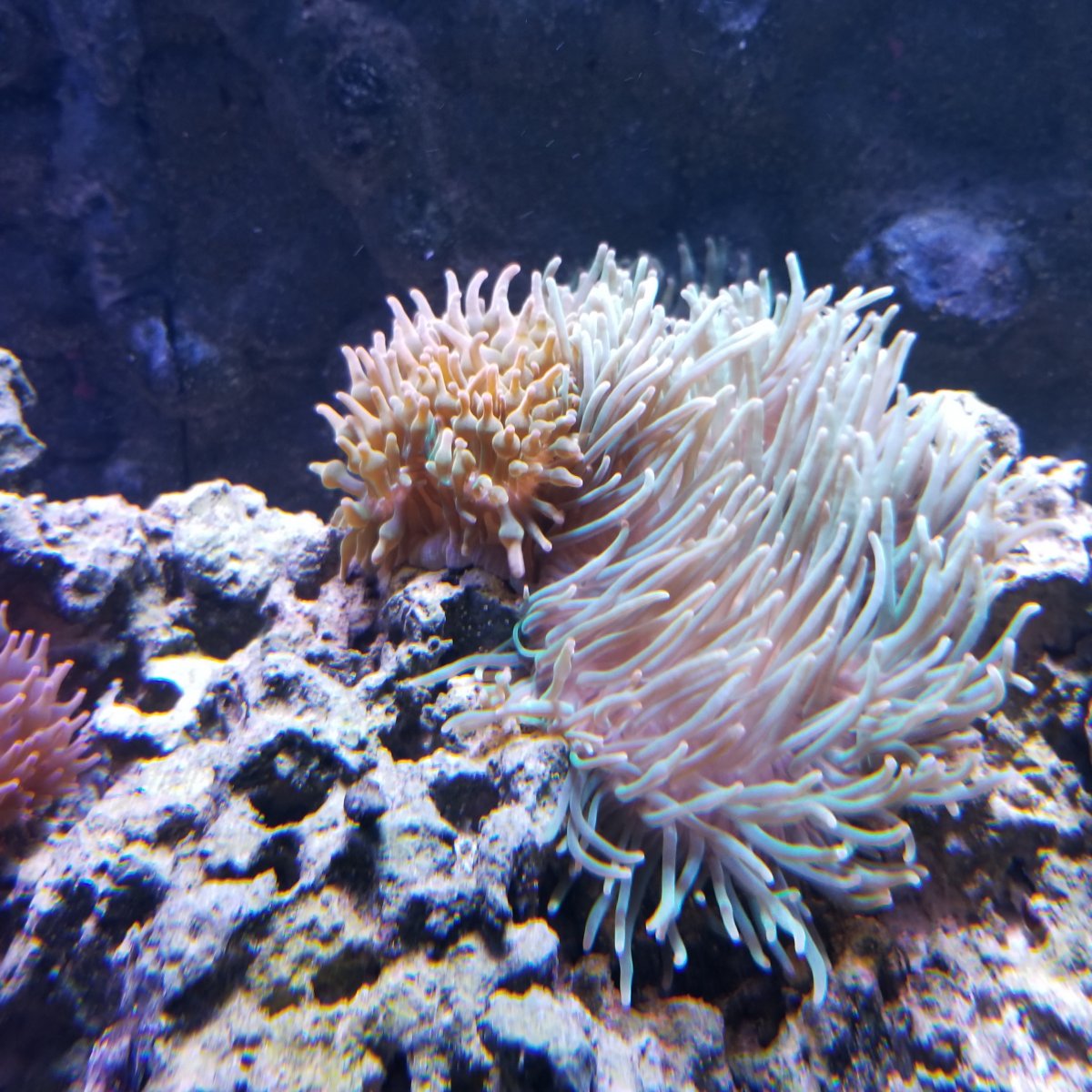 zagviper71 said:
Look at this battle going on in my tank:

I'm guessing that's a good spot That's pretty cool! And beautiful clown. Where did you end up ordering from if you don't mind me asking? 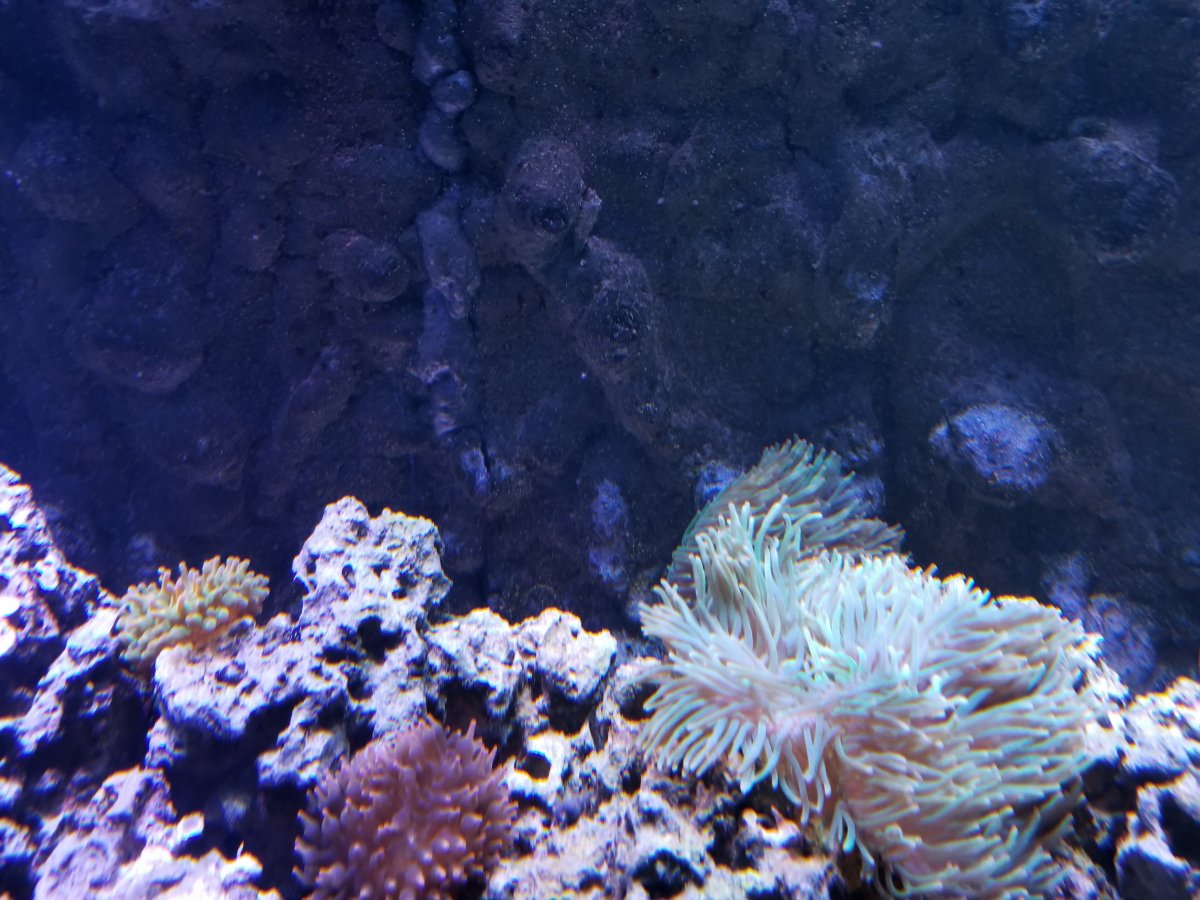 zagviper71 said:
and we have a winner! the massive still undefeated GBTA!!

My current group of 5 ocellaris are pretty peaceful at this point. I can tell they are all kind of picking on the slightly smaller fancy white extreme, but not really biting or nipping. They all just pay most attention to him. He still swims closely with them, so I think he will be OK.

I'm getting two more ocellaris tomorrow to finish off the collection, fancy white extreme and fancy white gladiator. Both from the same clutches as my existing ones. I'm hoping they will spread any ongoing aggression and will be more of the small sized clowns to help the female and alpha male be even more confused and OK with all of them there. I also just want two more. My skimmer is probably way oversized and needs more poop.

One of my clowns got extremely aggressive with the smaller males in my group. I gave him away and the group is now down to 6. Everyone was well behaved until I put in a H. Magnifica. All the small males jumped in it immediately, but the bonded pair did not. Finally the bonded pair figured it out and kicked everyone out. Out of the 4 who are floating around near the anemone, one of them (who is just slightly larger) is now picking on the other three, making sure they each stay in one of the top corners of the tank. He's taken over a BTA in the tank as well. If any of the fish come out of the corners, he will go regulate and push them back. So now I have a funny configuration where 3 corners of my tank are occupied by a small clownfish at all times. It's sort of an endless cycle, one of the smallest ones will assert dominance now that the bonded pair could care less about anyone else other than keeping their anemone to themselves.

I'm on the fence of riding this one out, or removing the aggressive small male. Eventually I may just end up with the bonded pair?
OP 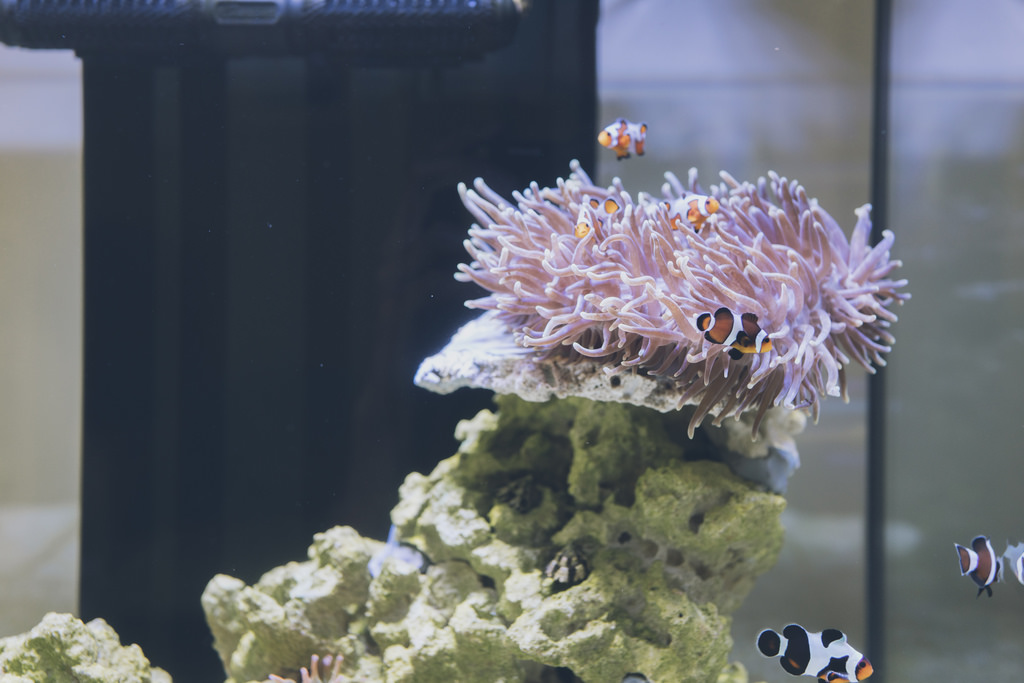 Smallest guy was happily sitting in there 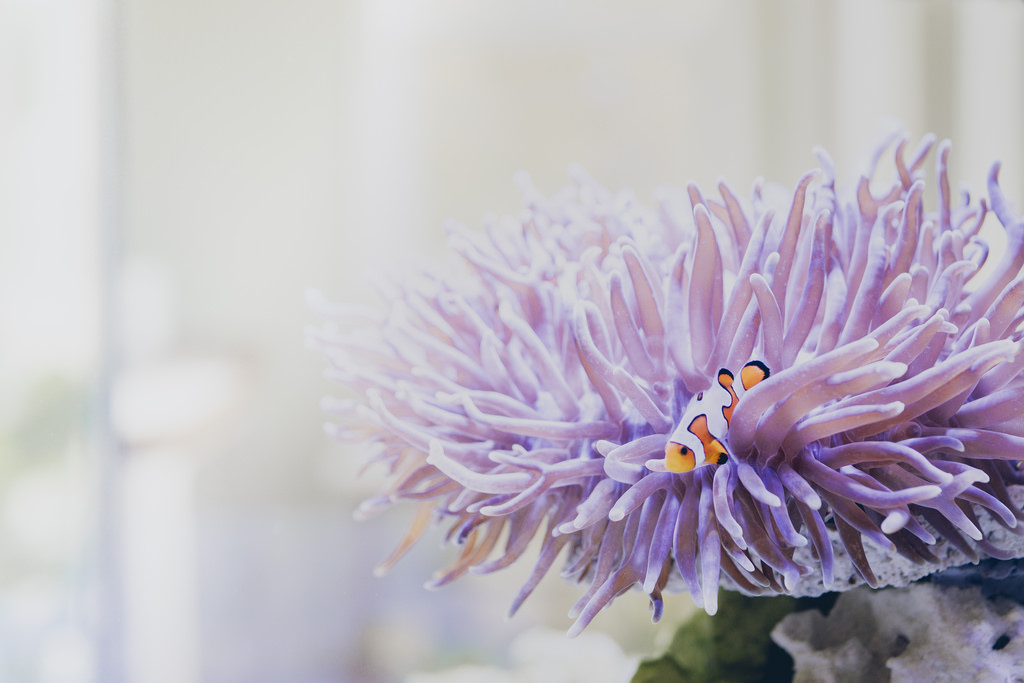 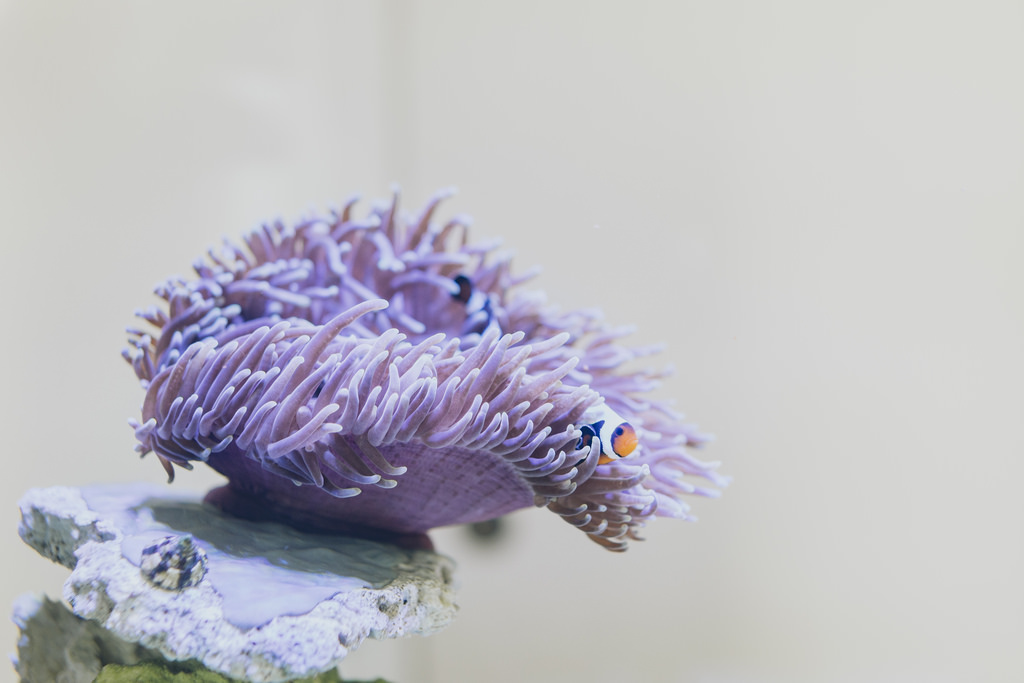 And one in the BTA: 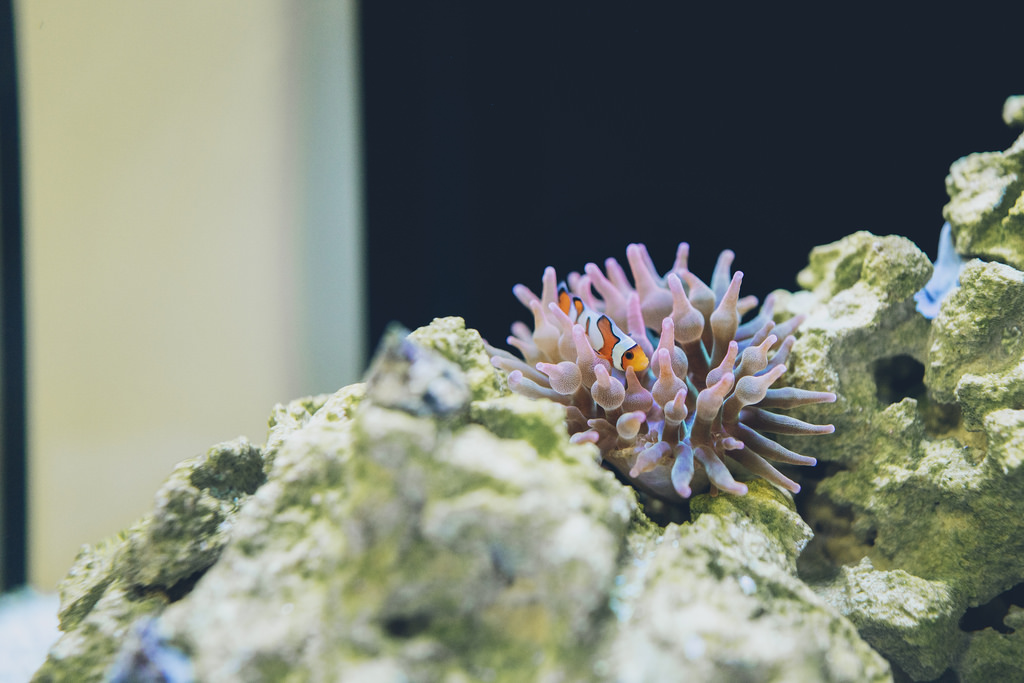 Rating - 0%
0   0   0
I isolated the one small clown that was keeping the rest of the small clowns in the corners. He was in isolation for about 5 hours. Two of the small cornered clowns came out and seemed a bit happier. I just let the isolated one out, and he's just in his BTA again minding his own business. I wonder if putting him in timeout worked, or he's just recovering from jail time.

I'm considering moving him to another tank or giving him away. But I wonder if I go the other direction of getting a few more clowns, that would help even more...

Maximizer said:
Have any advice for anyone wanting to start their own circus?
Click to expand...

A good way to do it is:
I didn't get all clowns from the same clutch, and I even got a bonded pair to try to keep hierarchy aggression down for the top two spots (female and alpha male). Not sure if this is the best idea, as I've had to remove two clowns (one was too big and a threat to the female and alpha, the other was hardcore picking on two of the other small males because it was slightly bigger than them). Overall, I think getting 1" or smaller clowns from the same clutch probably would've been easier. I'll probably need to remove one more clown soon =/

Definitely do not:
When to know to remove a clown:
When I say "REMOVE," I mean find it a better home. So before you decide to do this, make sure there are enough reefer friends around you who would probably adopt one. Don't expect to make money off of these, and just give them away or for a very very reasonable price. You have to be ready to take quite a hit on your investment. IF that's worth it to you, then go for it.

Have isolation boxes ready. clowns are easy to catch in a net, and just place them in the box. Don't keep them in the box for more than 3 - 4 hours, because they will rub their faces off on the walls of the box trying to get out (they're dumb). Within 3-4 hours, you should have sold / given them away, or let them back out.

Timeouts will NOT WORK. They will go right back to their normal behavior.

Rating - 0%
0   0   0
Do you think a harem could be kept without anenomes and instead a Xenia dominated tank?
OP

Maximizer said:
Do you think a harem could be kept without anenomes and instead a Xenia dominated tank?
Click to expand...

I don't think anemones are absolutely necessary. From my experience, it creates more aggression over territory, though could create a peaceful divide after some time (with a dominant pair in an anemone, the rest on their own).

Rating - 0%
0   0   0
I'd say if there's room overload it with a few more nems. That way there's room for everyone to claim their own piece and not any single clown or pair can rule all the nems.

Rating - 0%
0   0   0
I tried to introduce a group of 11 small clownfish to an established couple but an immediate outburst of brooklynella took 10 fish away.

That was some months ago and now I have a trio with no signs of aggression until now.