The irony of the progression pictures shown a few posts back is that I much prefer the picture from two years ago. While I appreciate that everything (mostly) has grown, I find it to be too cluttered now and it ‘offends’ my aesthetic sensibilities. How odd is that! I’ve been toying with some pretty draconian fragging ..... like chopping the big colonies down by half. Eventually I’ll have to do it lest the slower growing colonies get subsumed. I think once I get the nutrients under slightly better control I’ll have to have a ‘bring your own bone snips’ party.

Also partial to smaller fish. As an active scuba diver coming over a reef crest with lots of small fish darting around is pretty awesome to see. Especially has they dart for cover or move out of the way.

The regal is huge. I've been toying with purchasing one but the more I see the size of it in a take such as yours I'm actually going to pass. While I have a 210 gallon that fish looks too big and I already have a large fox face and soon to be large scopus and lavender tang. Very pretty fish though that you have.

Keep up the great work.
OP

I alluded to some nutrient issues earlier. Built a bigger ATS, and that has helped, but putting in a sulfur reactor has helped even more. It's a slow 'gestation' to get adequate bacterial colonies to handle 700 gallons of water but I am making progress. Assuming test kit accuracy (or at least precision) my phosphates are down to 0.15 from a high slightly above 0.2. Neither terrible, but not ideal either. Nitrates are down to 20 from a high in excess of 50. Again, neither terrible, but not ideal. Sulfur reactor is certainly 'old tech'. Never had run one before, but it's a pretty slick piece of kit.

So with the improvement you saw after upgrading your ATS nitrates weren’t being mitigated enough hence the sulfur denitrator. In retrospect do you think a bigger ATS yet would even better handle the nitrates and might alleviate the need for the denitrator? Or do you think with an ATS there is a point of diminishing returns?
OP

It’s a good question. Based on sizing proxy my ATS should handle more food than I’m current giving to the fish. Yet nitrates stayed stubbornly high. I’ve no particularly good explanation for the discrepancy other than the sizing numbers being wrong.
Last edited: Oct 29, 2019 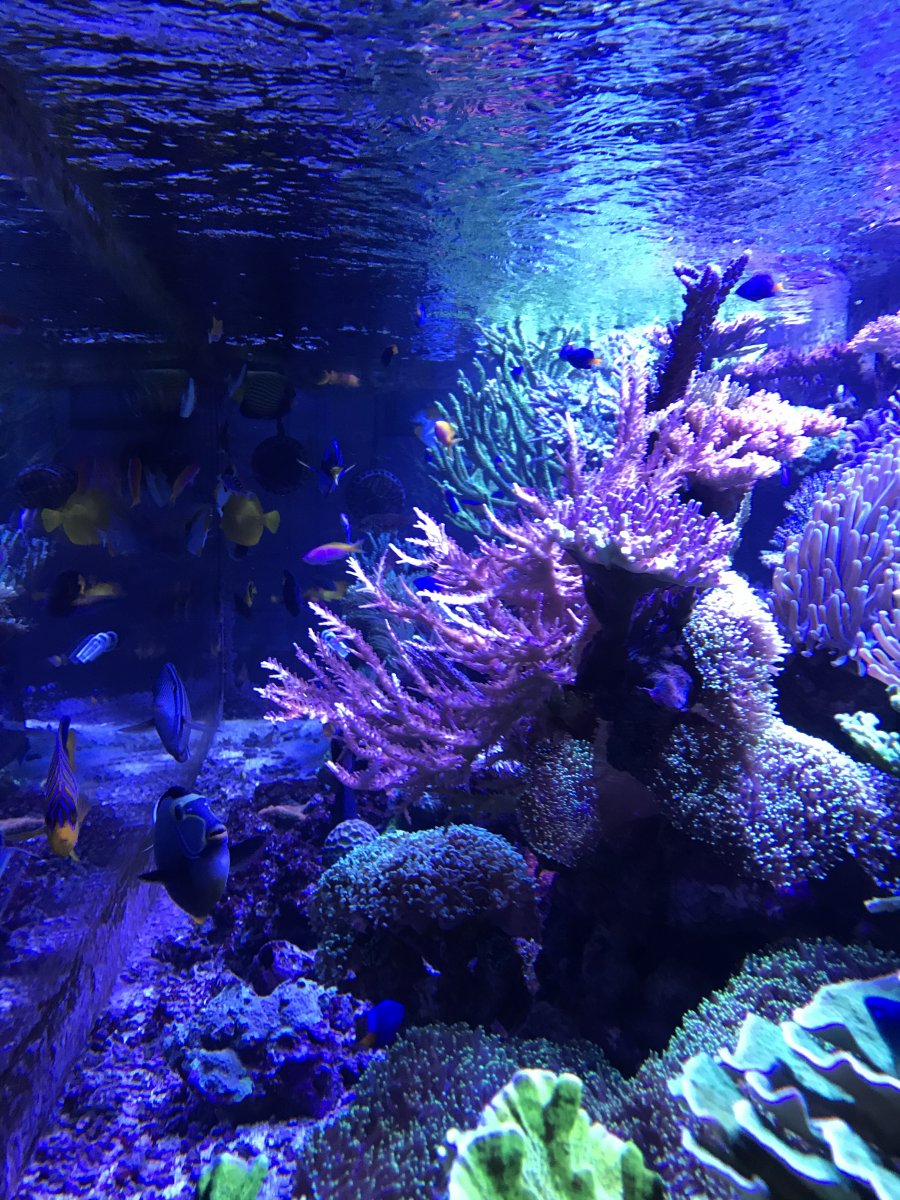 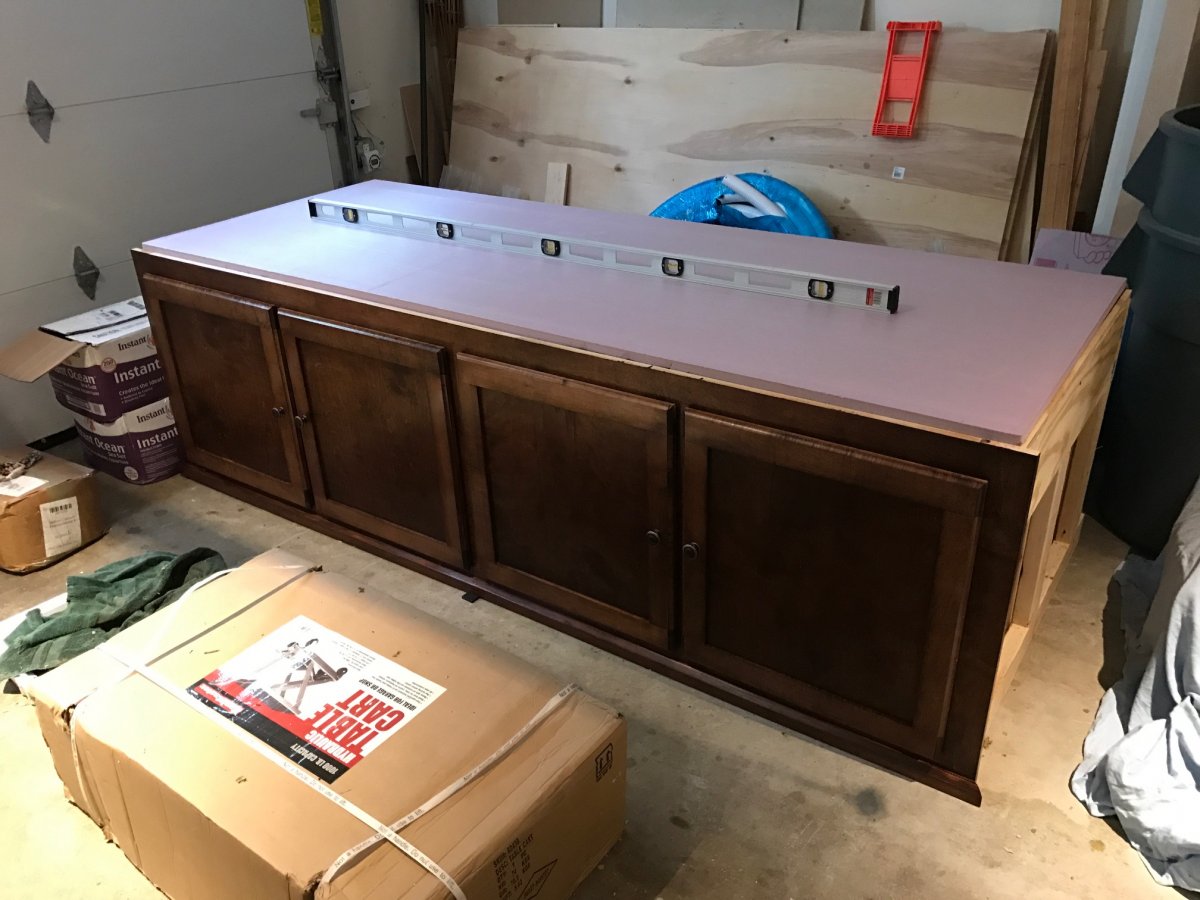 ca1ore said:
One of the reasons I went acrylic this time (am a 30 year reefer .... nothing but glass tanks) was because of the weight. Glass tank of this size is 1,200 lbs. give or take. Acrylic much lighter, though still a sizable 575. So I decided to build a cart to move it around more easily. Worked like a charm, though 'driving' the tank down the skinny metal ramp from truck to cart not for the faint of heart. Delivery truck was supposed to have a lift gate, but of course it did not. Fortunately the driver was an amateur power lifter, I kid you not, so between the two of us we got it onto the cart. Were it not for the cart, we wouldn't have been able to do it.

Also bought the lift cart you can see in the photo. Easily cranks up 1,000 lbs.
Click to expand...

I’ve had a lot of glass tanks in my freshwater days and they just don’t have the clarity to them that Acrylic has & that’s the reason I have my 600 that is polycast acrylic.
OP

Yah, I’ve been very happy with the decision to go acrylic. Never had one before and I must say that the disadvantages folks always cite seem overstated ... so far, at least.

What mechanical filtration are you using? Or what else do you attribute the clarity to?

I love acrylic as well for both clarity and insulating aspects!!! It is my preferred choice for big tanks.

neilp2006 said:
What mechanical filtration are you using? Or what else do you attribute the clarity to?
Click to expand...

. IMO The clarity first & foremost is in the acrylic itself then good mechanical filtration..

soffutt said:
I love acrylic as well for both clarity and insulating aspects!!! It is my preferred choice for big tanks.
Click to expand...

neilp2006 said:
What mechanical filtration are you using? Or what else do you attribute the clarity to?
Click to expand...

soffutt said:
I love acrylic as well for both clarity and insulating aspects!!! It is my preferred choice for big tanks.
Click to expand...

Moving from 1/2” glass to 1” acrylic has made a big difference to tank heating. I actually use less total heating watts on this 450 than I did on my prior 265.

ca1ore said:
I’m not particularly sentimental about my fish. I do have my favorites though. One was my dusky wrasse, purchased on a whim back in early 2013. While I don’t recommend whimsical fish purchases - research then buy, not the other way around - sometimes you get lucky. Dusky wrasse has been an excellent fish, absolutely (and literally) murder on pests of all kinds. Cleared out a pyramid snail infestation, controlled an outbreak of red planaria worms, even ate the occasional bristle worm. OK, he also ate my CUC ..... but, hey, nobody’s perfect! He’d been looking a little worse for wear over the last few months and gradually losing weight even as he continued to eat with the same gusto. I’m not sure how long wrasses like these can be expected to live. I had him for almost 7 years and I don’t know how old he was when I got him. Anyhow, the last few days he’s not reappeared in the morning. Not a fish one sees very often, and usually miscategorized as not reef safe, but when I see one again I shall buy it. Gets big, 6-7 inches, but highly recommended for policing larger tanks. Some of my leopard wrasse are of comparable vintage, including a jeweled that I’d also be bummed to lose. None of them show age related deterioration yet though. It is interesting that my bipartitus had been female for over five years then, as the dusky started to deteriorate, turned male literally overnight. Coincidence perhaps .... or perhaps not.
Click to expand...

Sulfur reactor has worked very well to reduce nitrates and so far I’ve seen no adverse effects. Bottom picture taken on Oct 21st - left vial is effluent from the reactor; right is tank water. Upper picture is today, same sample sources left and right. Closing on 80 before; around, maybe even under, 10 now. Almost too fast a drop. 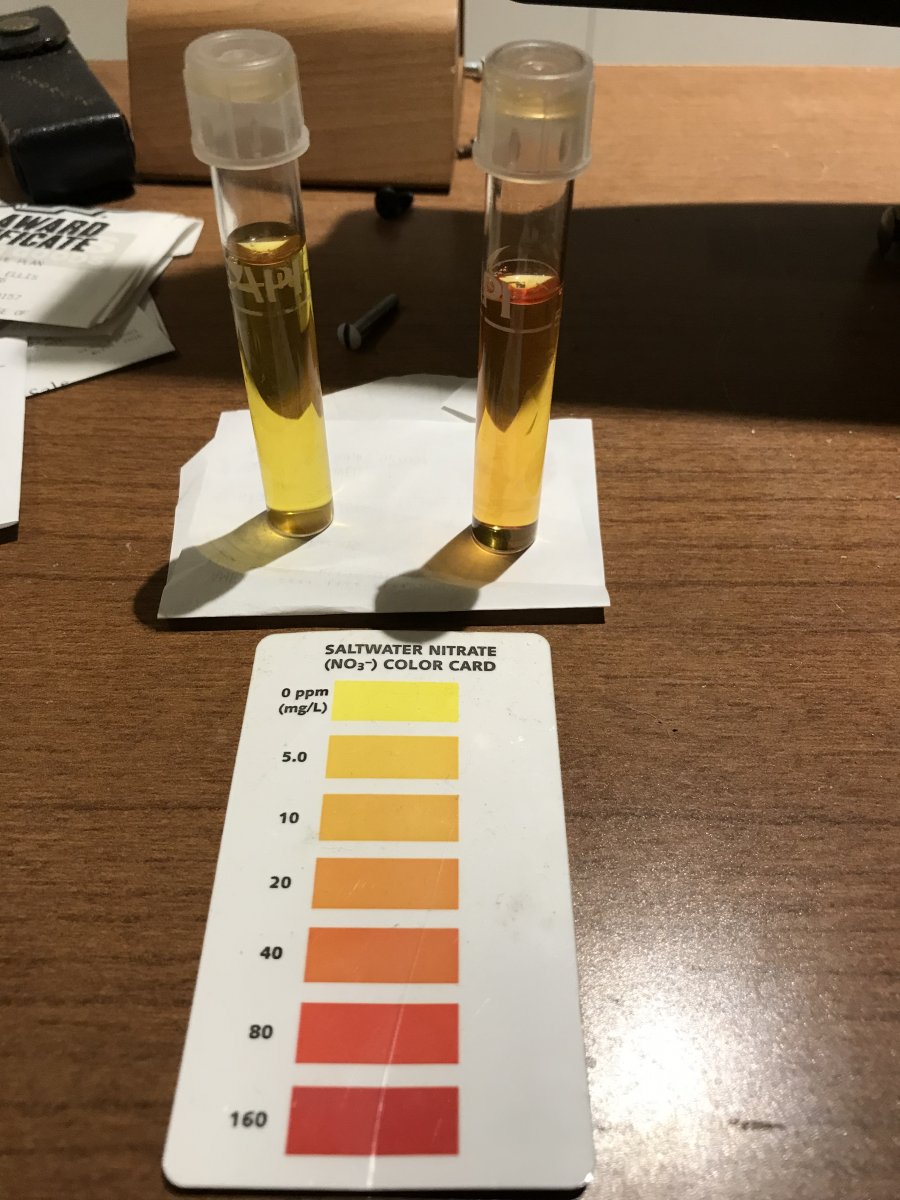 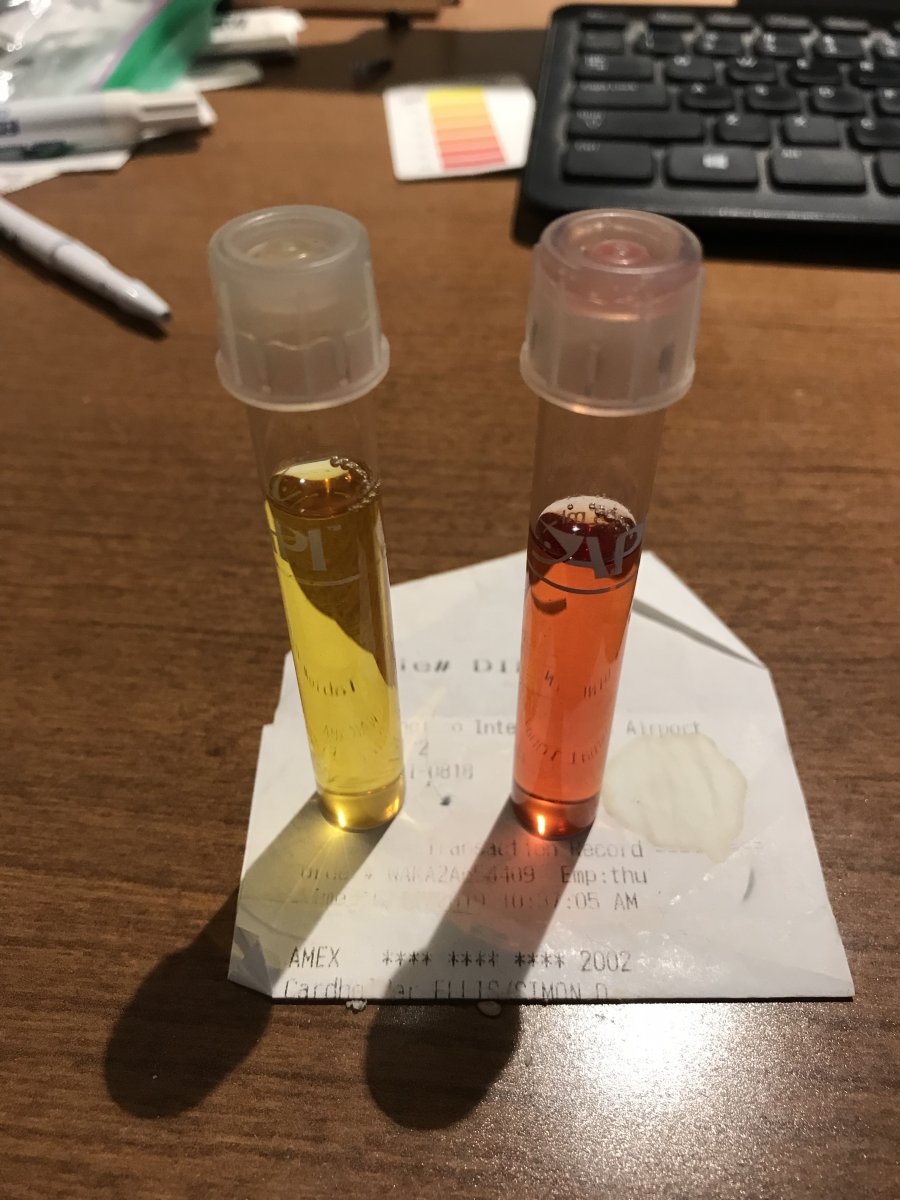