Reading build/tank threads were/still are incredibly helpful and inspirational for me. I'm a little late to the game, but I figured better late than never! Currently 5 months in. 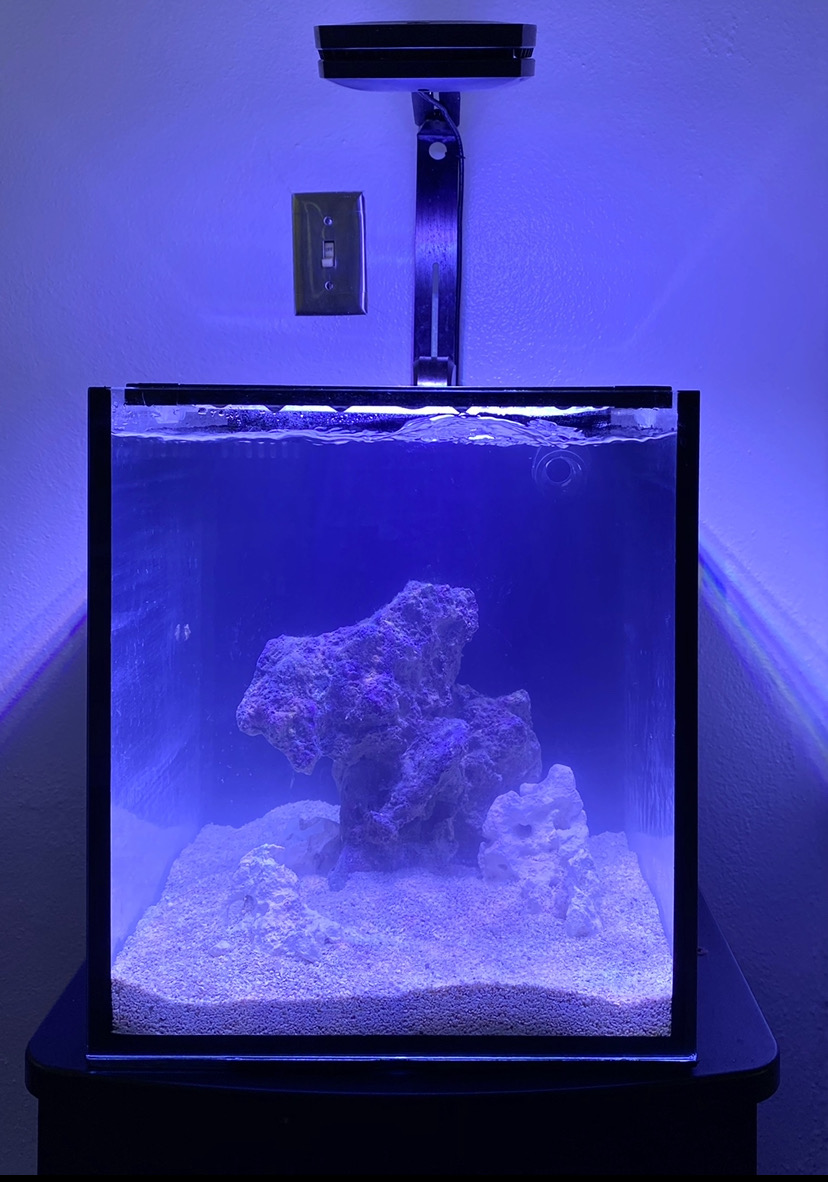 10-13-20:
Two clowns were added a week prior, with a few birthday corals. More rock was added. The female clown was eventually taken back to the LFS because she was a ruthless bully - beyond mating behaviors. 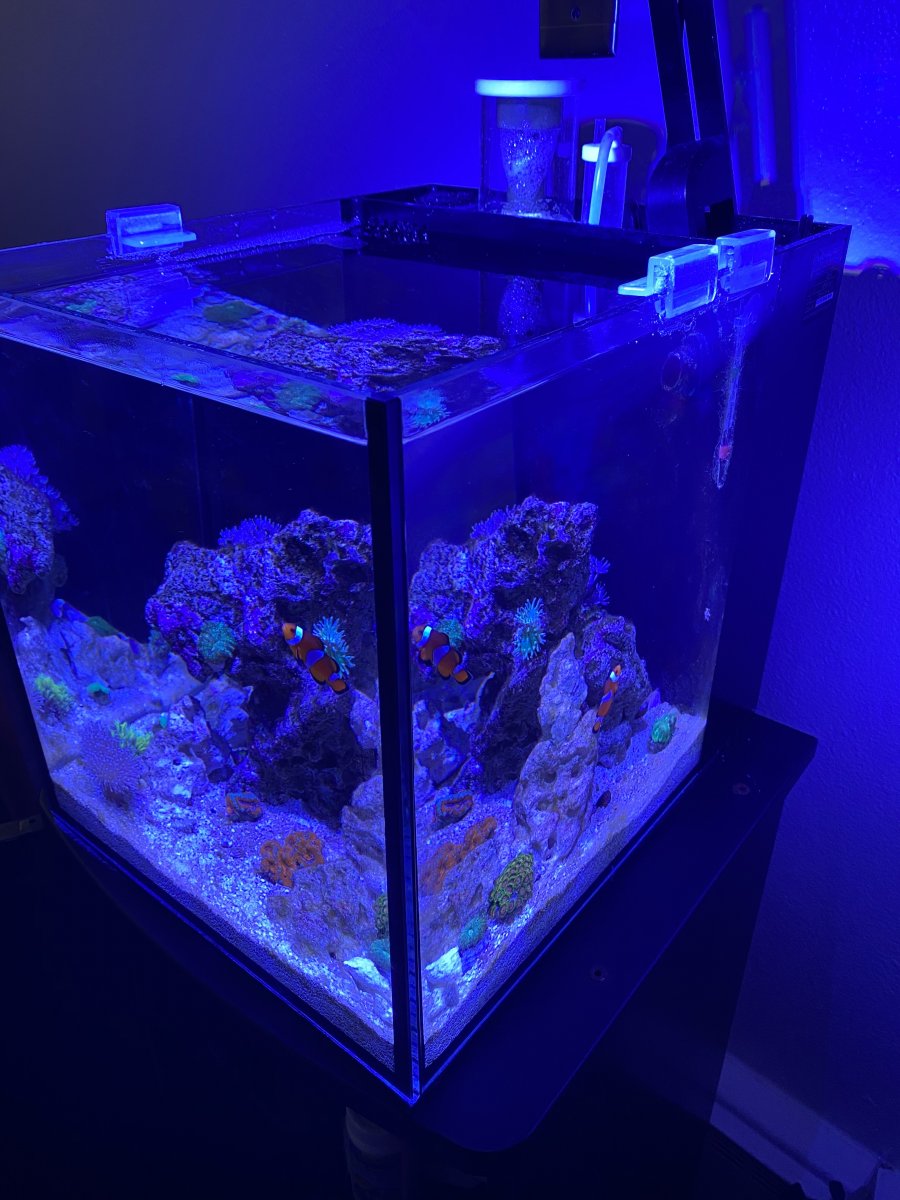 Example of the brutal GHA problem I had + feeding duncans.

FTS after returning home from college for break between semesters. (11-24-20) 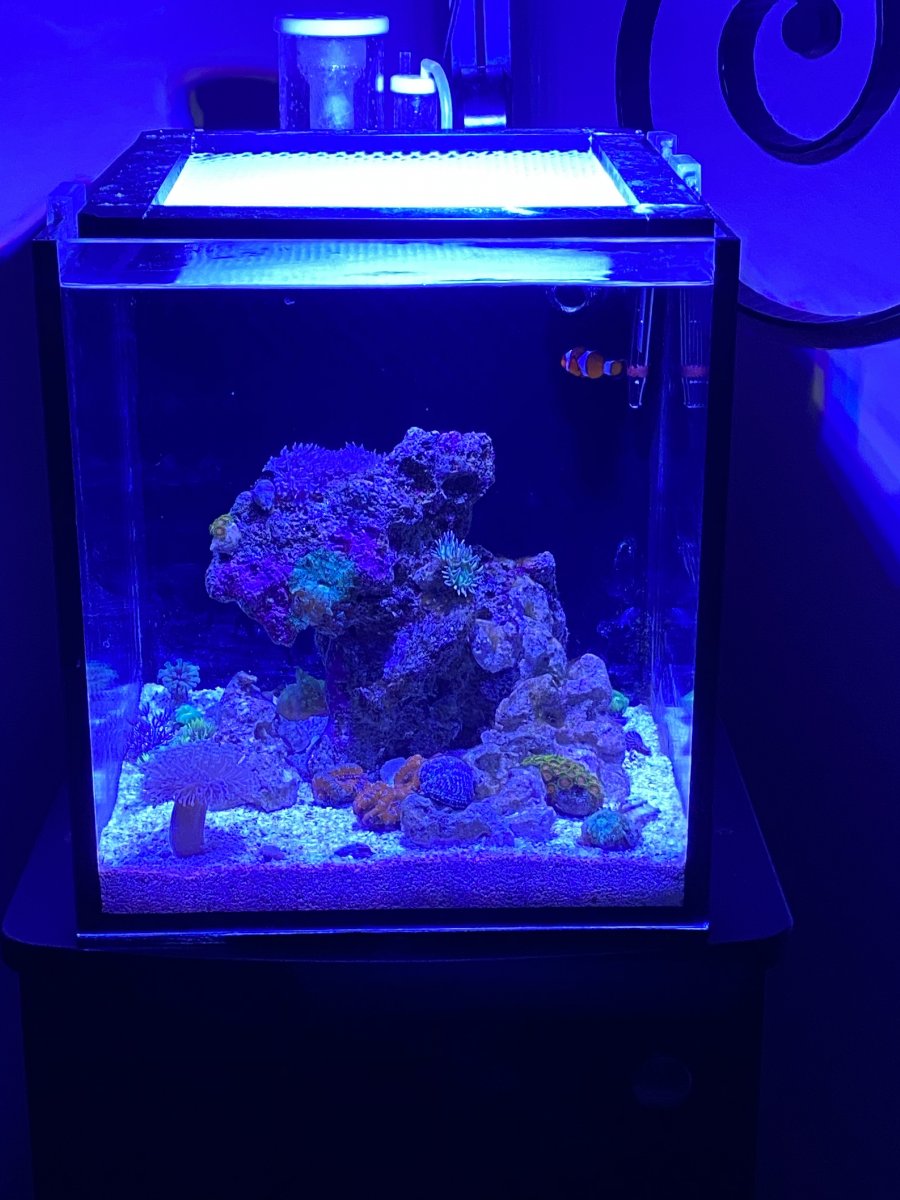 Post-Black Friday (11-27-20) haul with torch, new zoas, and mushrooms acclimating. 6-line wrasse was added a week prior. You can still see how bad the GHA was. 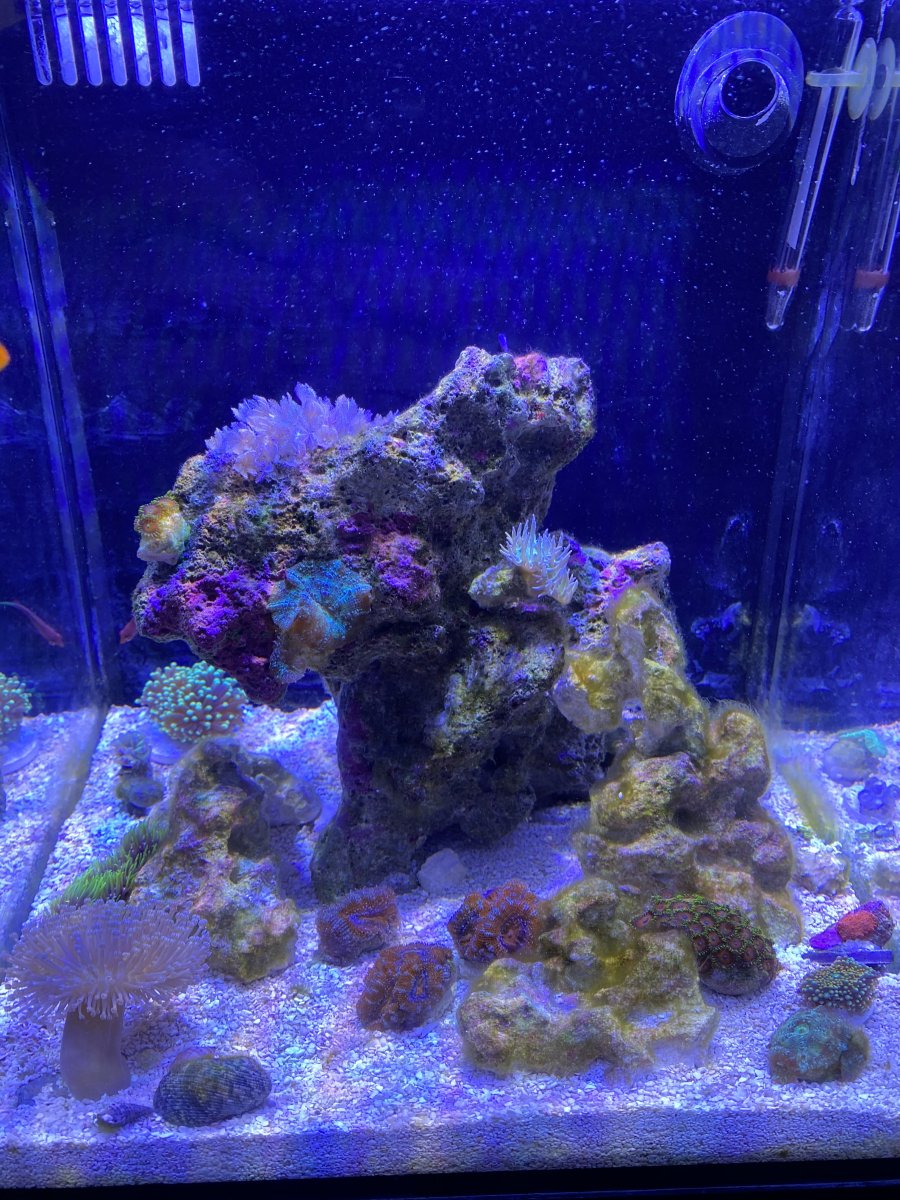 12-9-20. Rockwork was adjusted, and frags were moved accordingly. I added my tailspot blenny around now. GHA was mostly defeated, in part due to taking rocks out and completely scrubbing, heavier waterchanges, adding phosguard, plus the addition of the TSB. 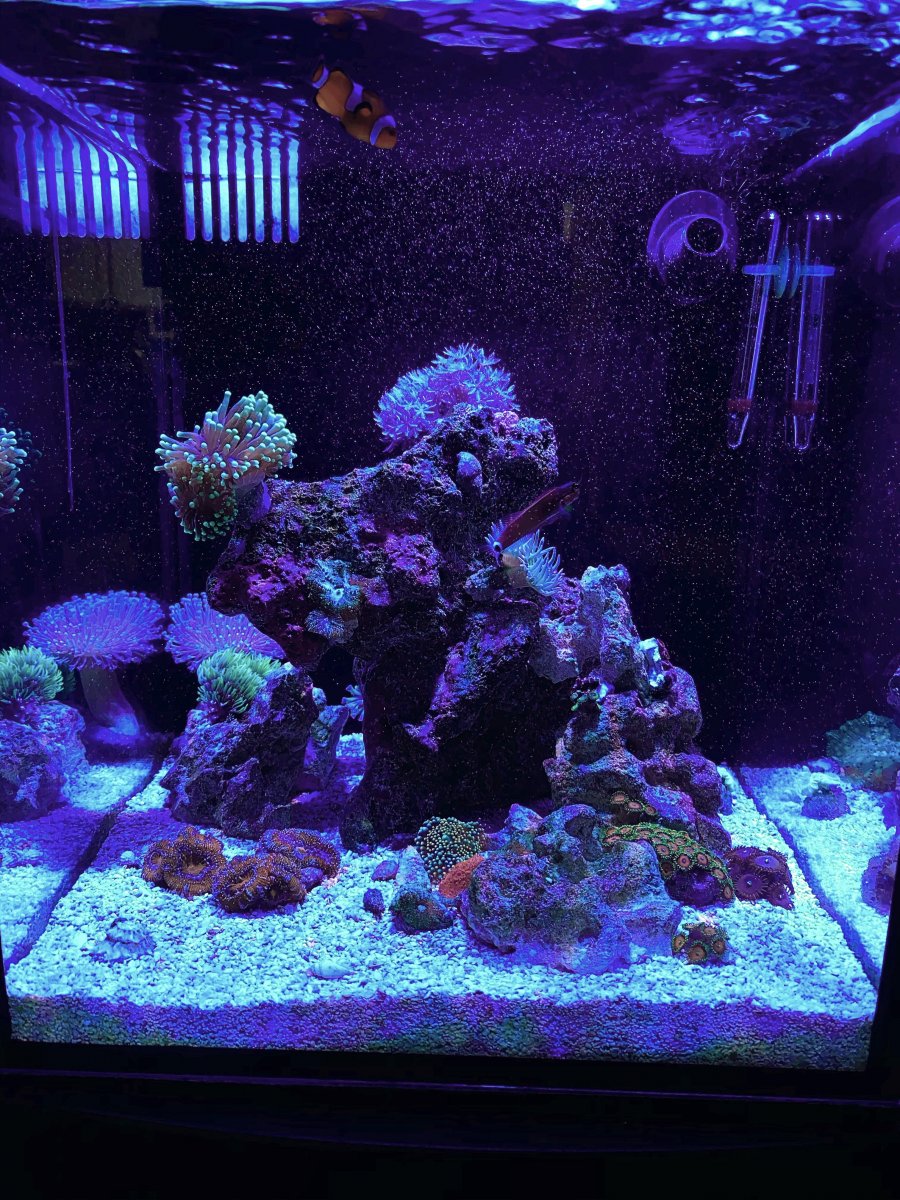 Acans were LOVING life, eating 2-3 times a week with ReefRoids or NLS pellets.. but I had to trade them for some zoas because the blenny began to pick at them. It started with him trying to steal food, and continued with him attempting 24/7 to pick at them to see if they had food. 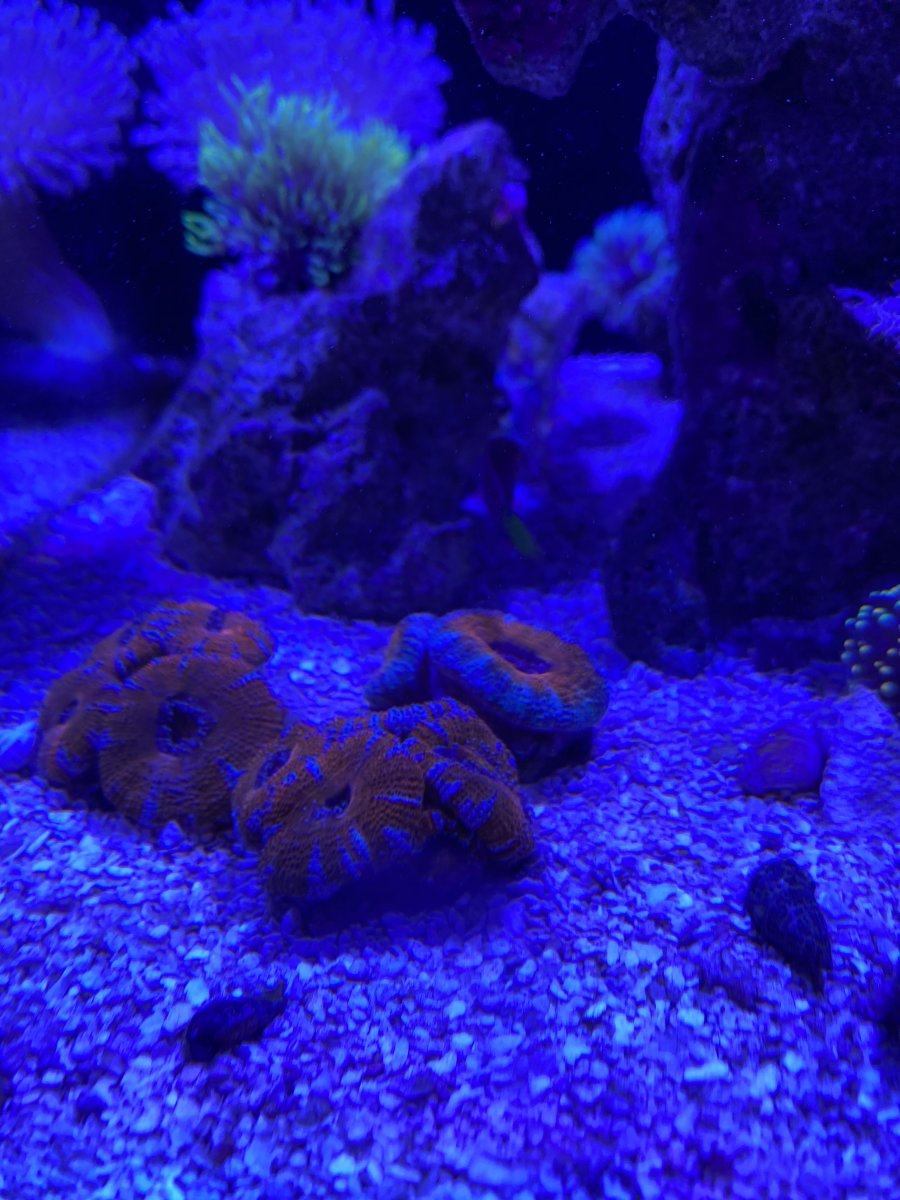 1-15-21. Newly traded zoas acclimating on the sand. Plenty of new zoas were bought and new rockwork was added. Decided to try my hand at SPS with a digi. 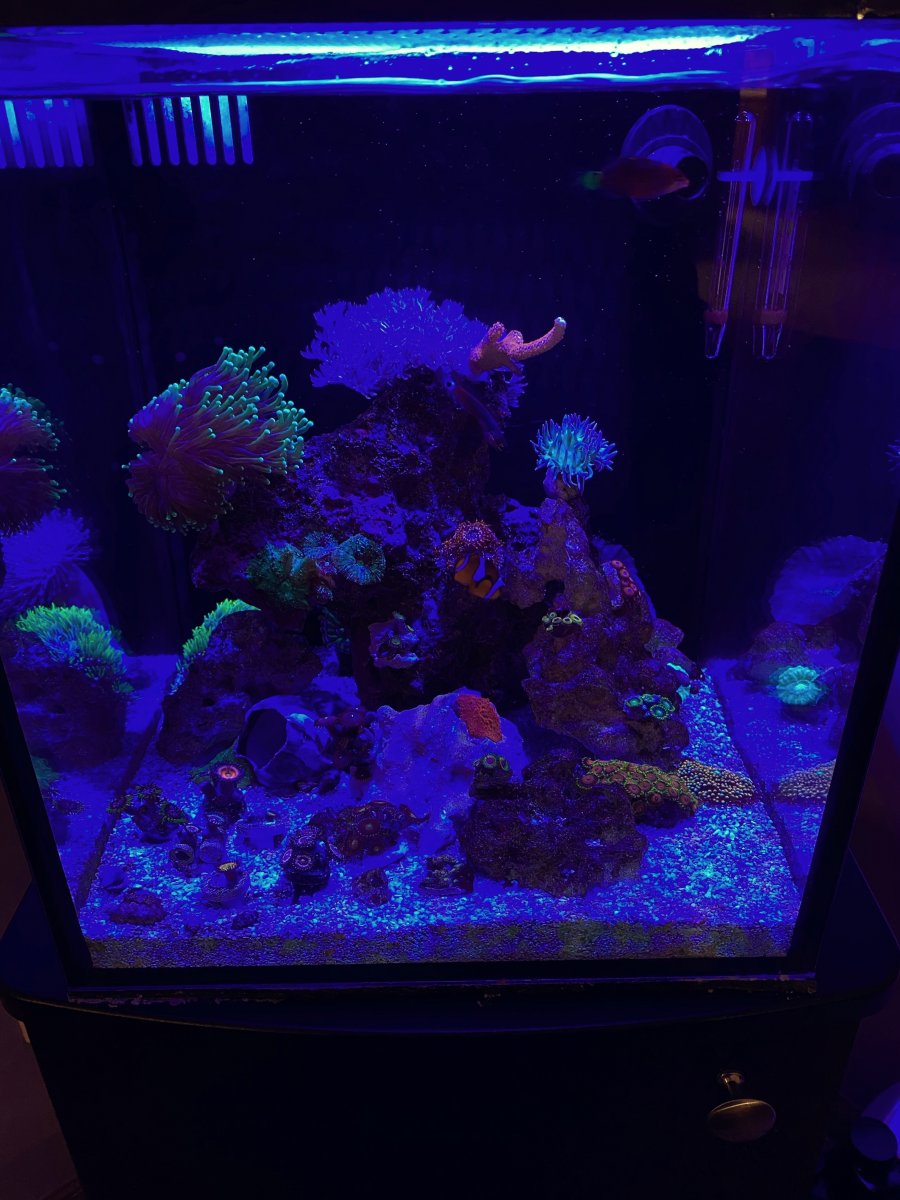 1-25-21 most recent pic. I have to figure out what I'm doing with the blue agave and hurricane zoas, but otherwise everything is settled how I want it. All I can really do now is wait and let everything grow out now. 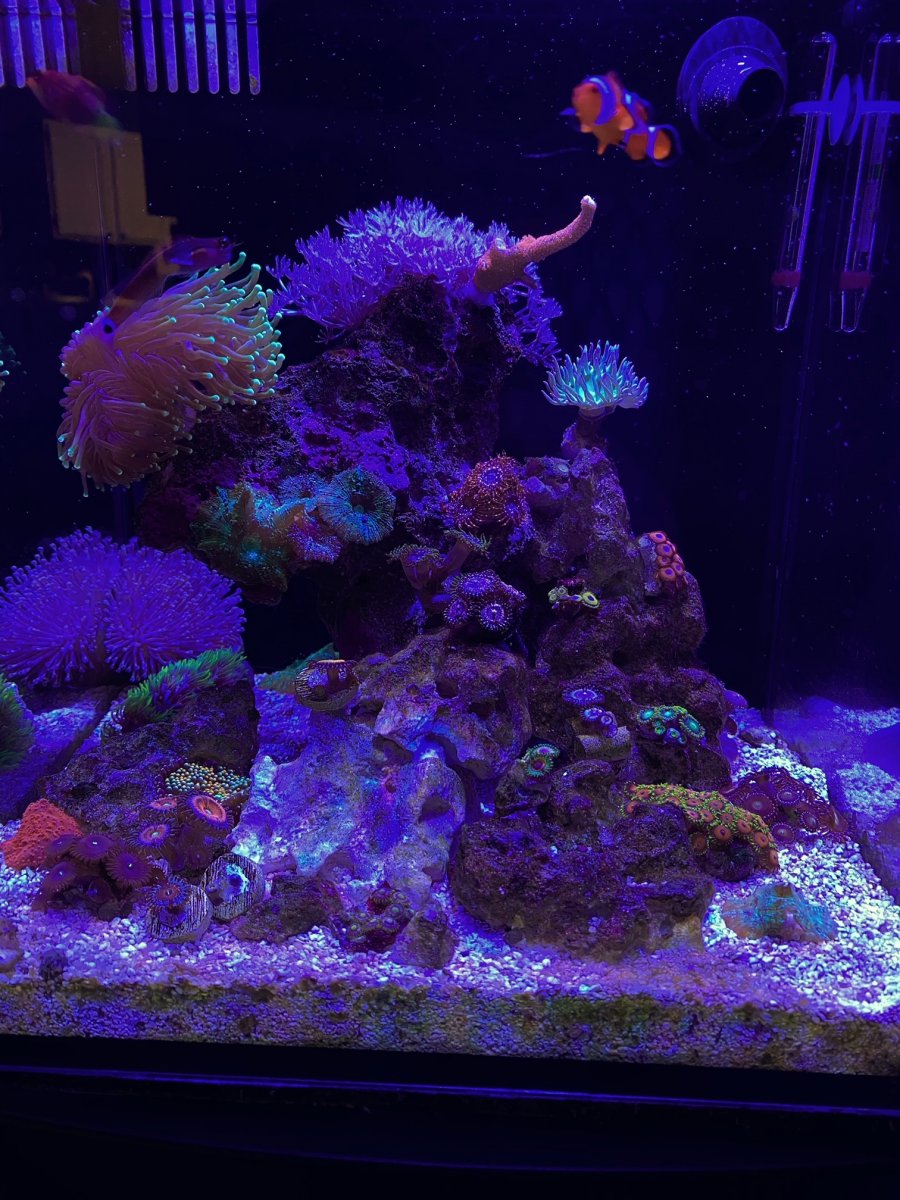 I run my tank at 78 F, 1.025 SG, with 1 gallon WC a week. My phosphates are nearly undetectable and nitrates are around 5 ppm, so I try to spot feed ReefRoids twice a week. I get nervous trying to raise nutrients too high because of my last GHA battle... If you look close enough, most of the rocks have low lying fuzz left over. However, with my CUC and light scrubbing, it has yet to be too much of an issue. I figure it's only natural to have some algae. Overall I have loved reefing so far - the transition from planted tanks has been smooth. Definitely had my fair share of noob moments, but it has been a great ride.

Here’s just a few random shots. I like a bluer light schedule, so every pic is of varying degrees attempting to take the blue out with various apps. No edit is the same, so take pics with a grain of salt lol. 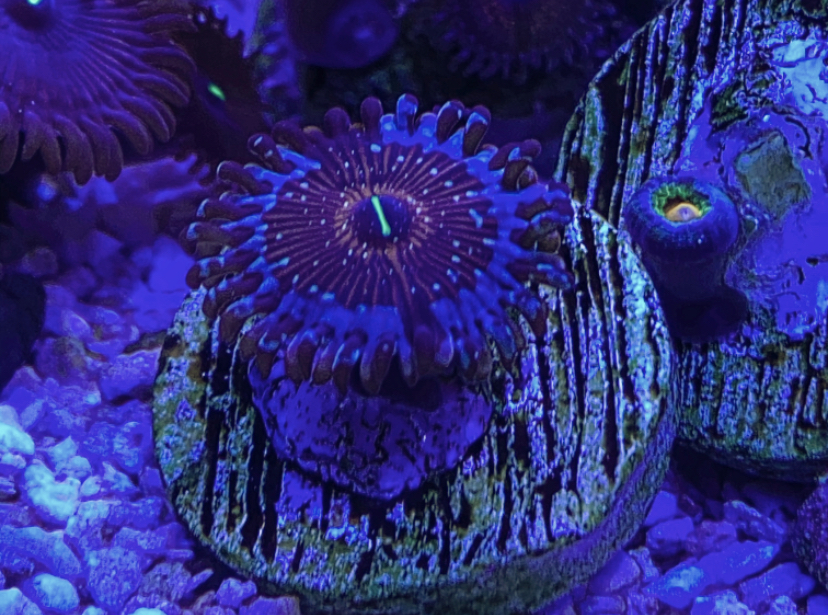 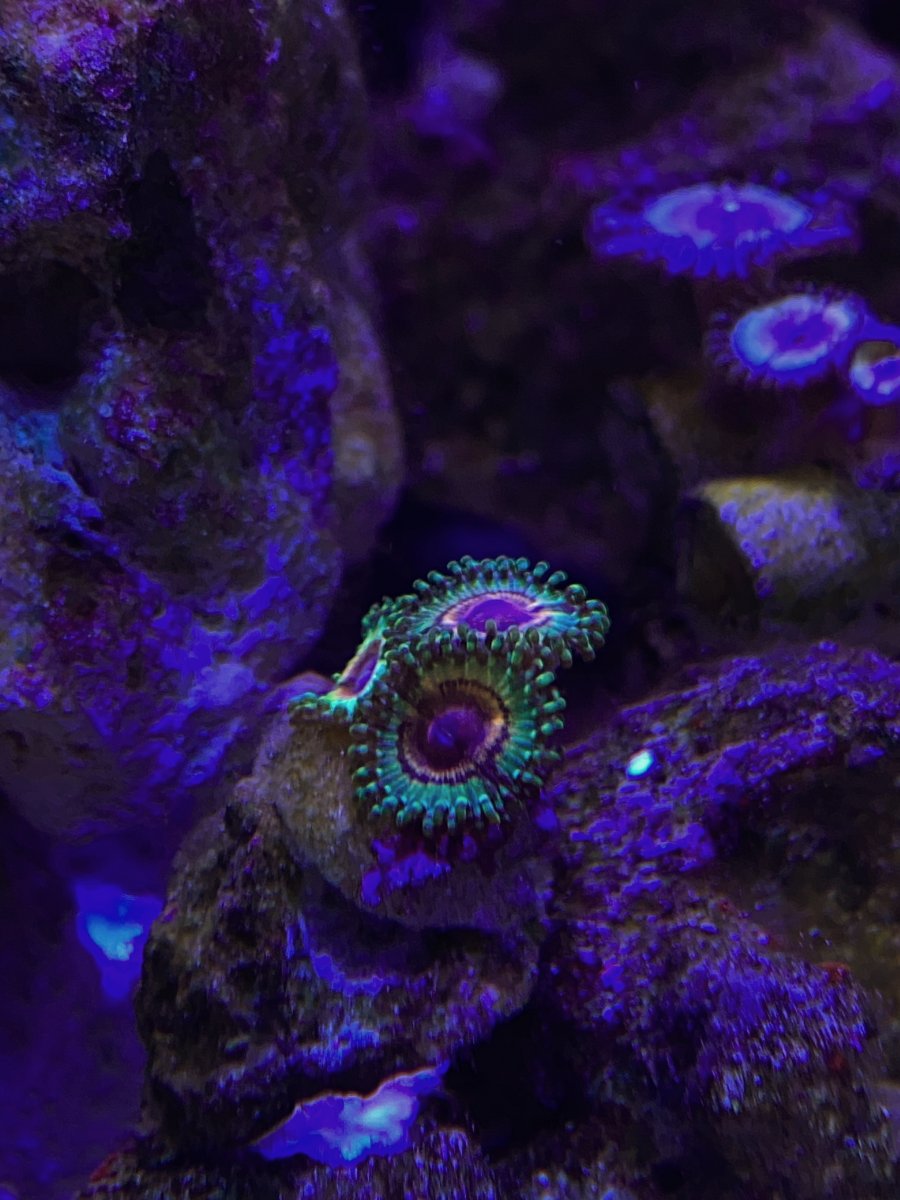 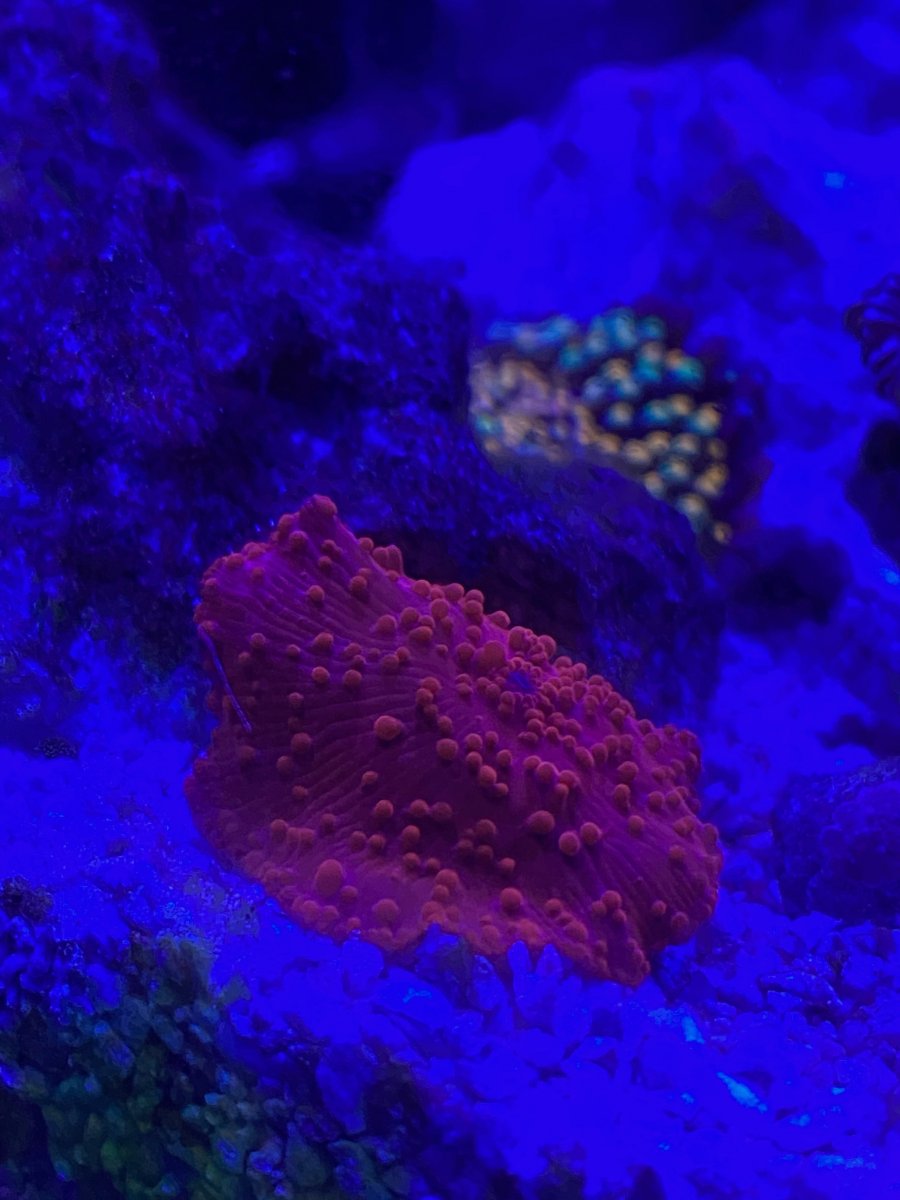 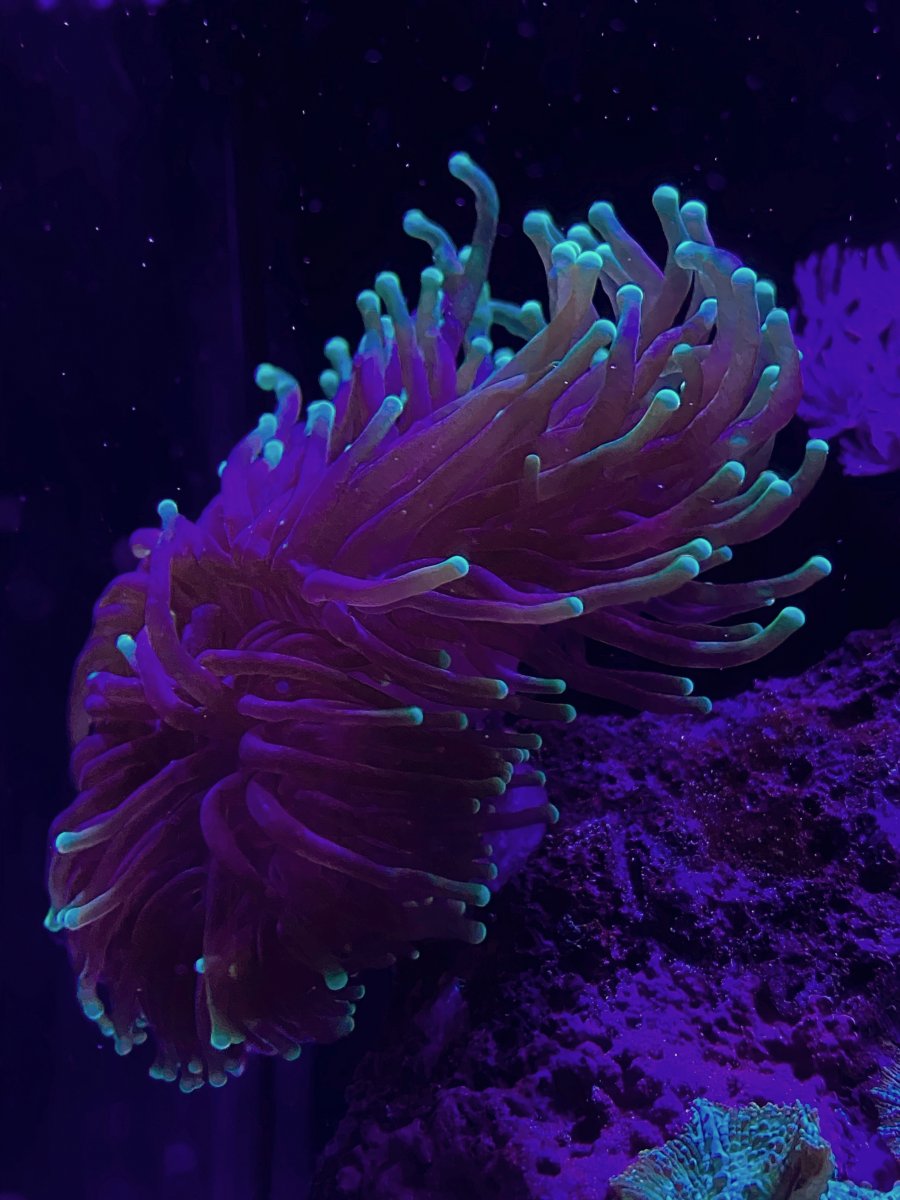 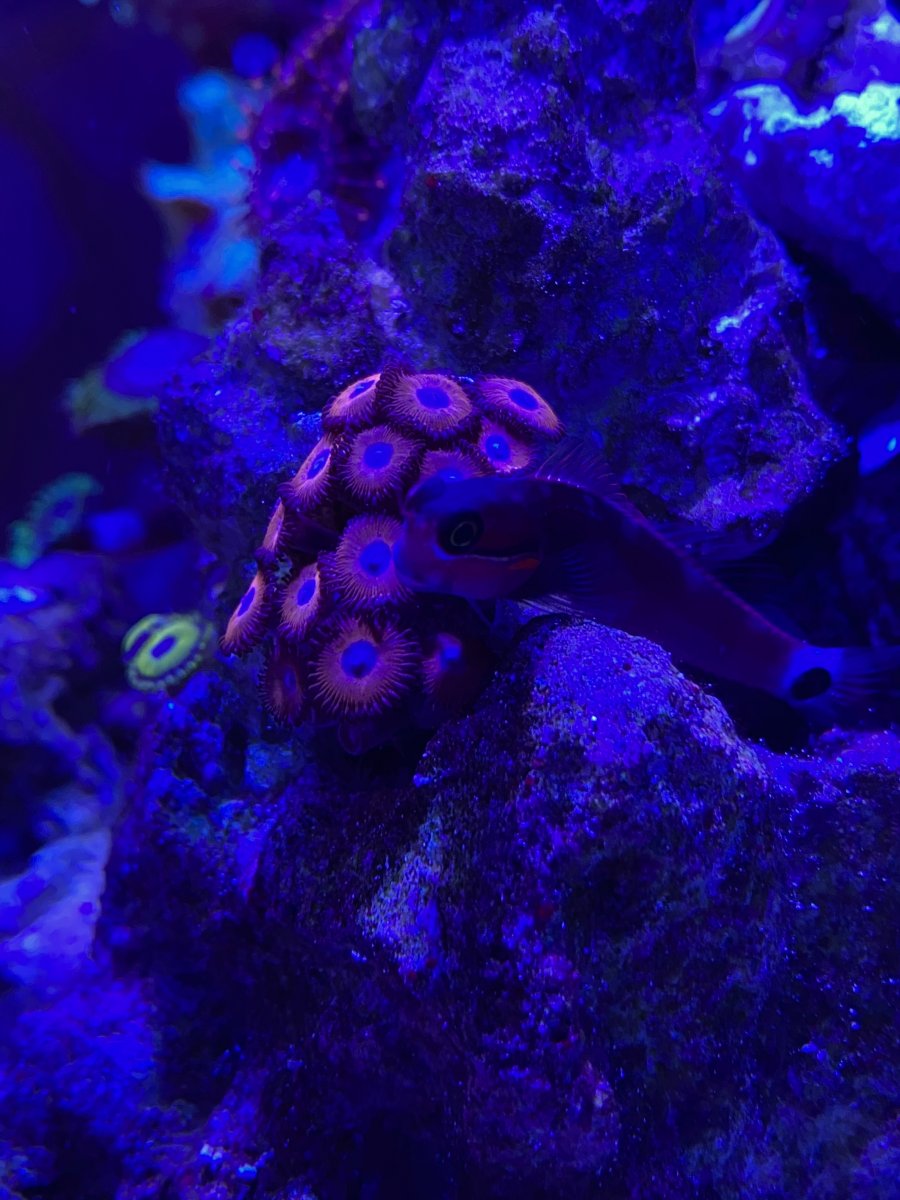 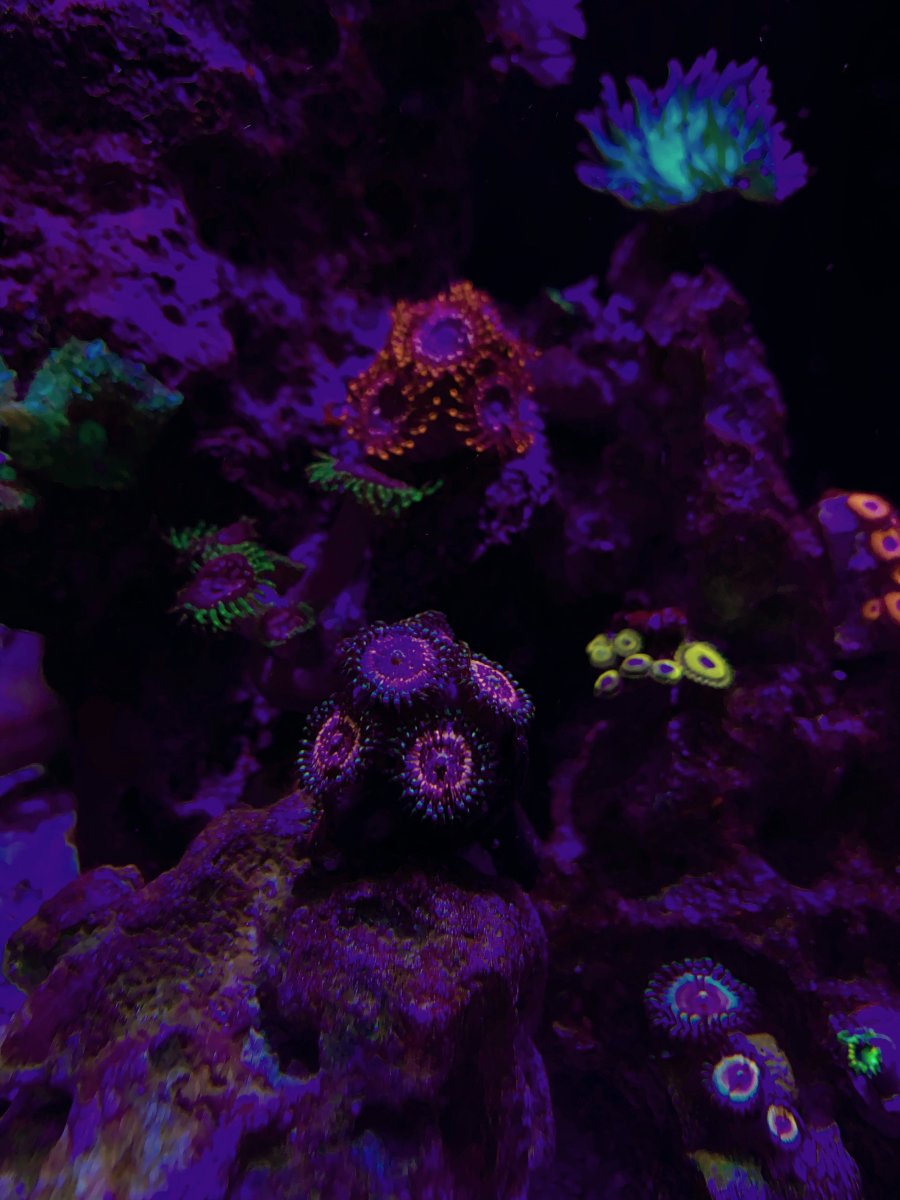 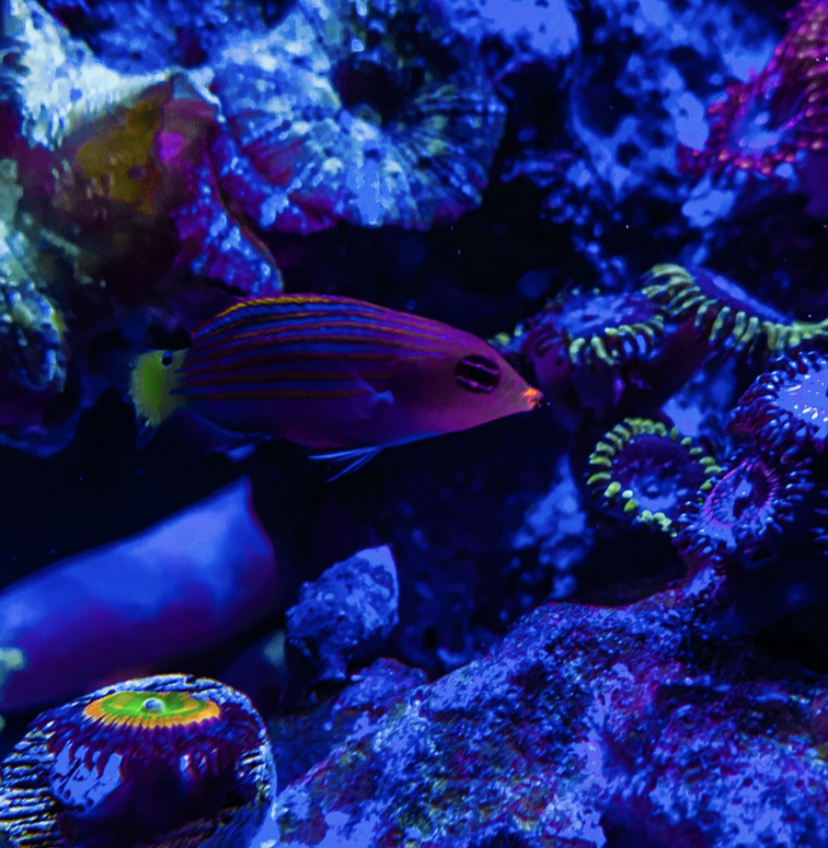 Moved some zoa frags around and the ricordia shroom. I still need to figure out exactly what I’m doing with the blue agave, hurricanes, and gobstoppers. However, I’ll leave that for after returning to college. The mont digi frag isn’t doing great, and I believe this is due to flow. It ain’t really breaking my heart though, I’ll trade it and let the Xenia pop off.

Also took a nice pic of the laser lemons that I thought was shweeeeet. 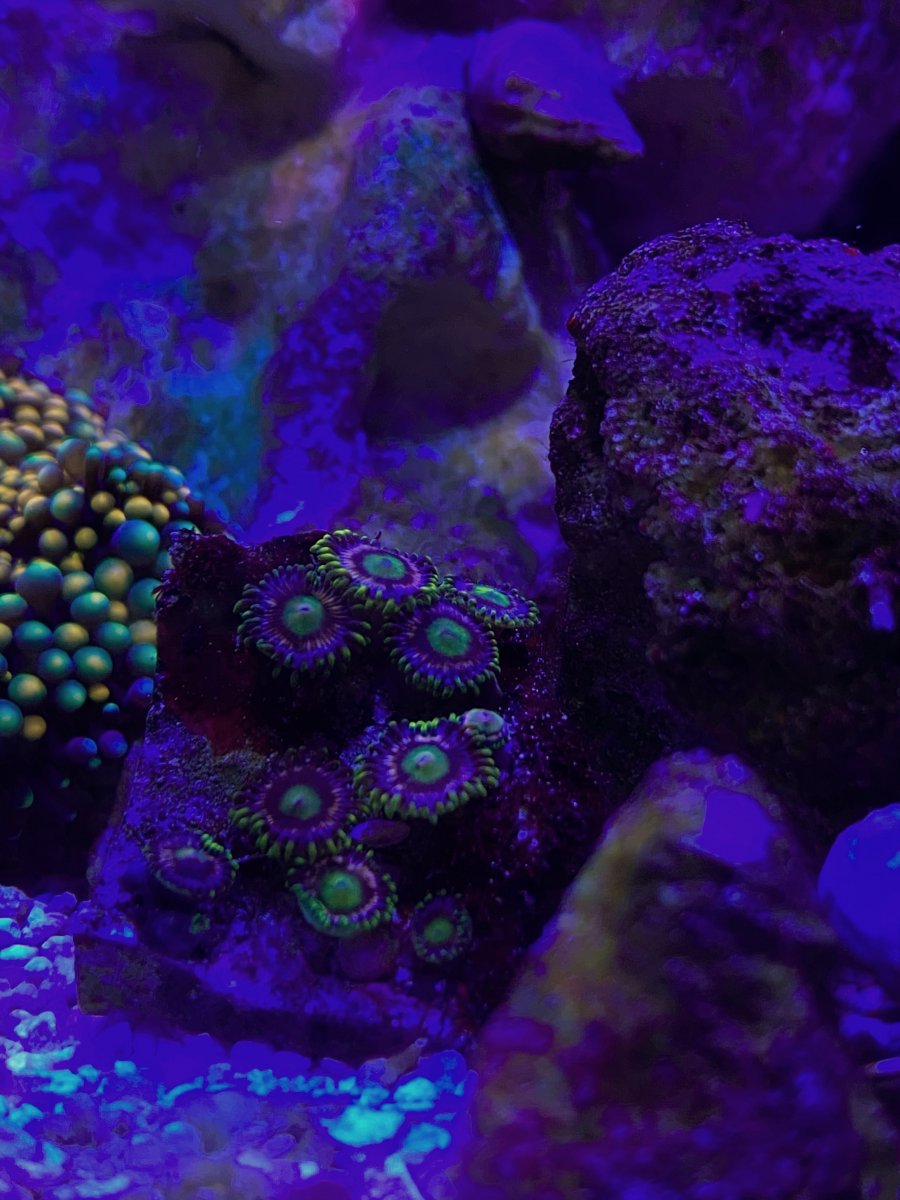 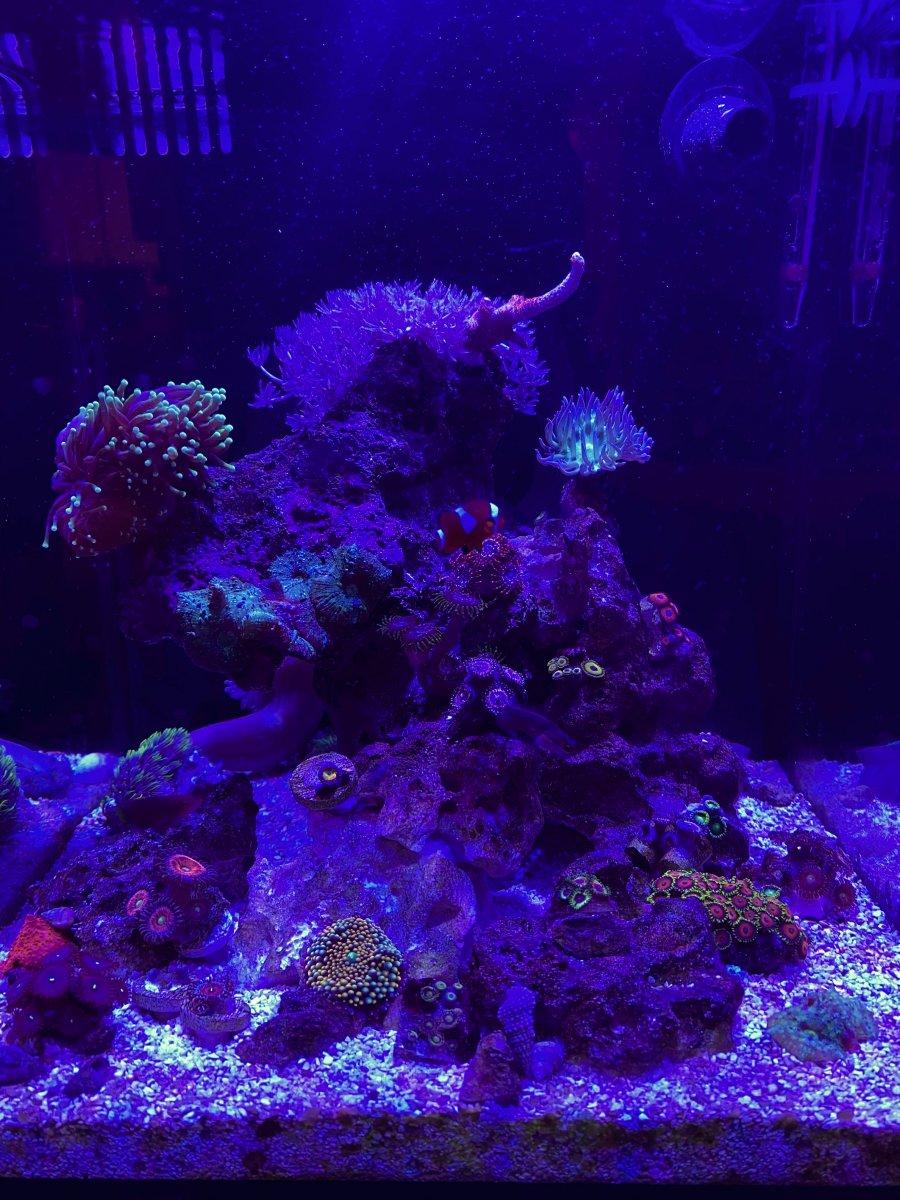