Hello there fellow reefers. My name is Cesar and I’m from CA. Long story short, I had a 60 gallon tank years ago that ended up crashing and taking all the livestock with it, after that happened I kinda left the hobby. But couple months ago I started getting random adverts on my IG and FB about corals and reef setups, so me being me I started to look into it again and saw all kinds of tanks from big to small and that right there was enough to get my attention. So pretty much I ended up with what the title says “WATERBOX 10 gallon tank” in my office/game room.

Currently in the cycling stage, bout 2 weeks in.
Feel free to comment and leave your thoughts and or questions. Glad to be back in the hobby even if it’s with a nano tank (which I don’t mind at all)

First I was looking into getting some sort of table/stand for the tank but while aquarium stands were 200-300 dollars, night stands/counters weren’t that cheap or greatest either. Wife and I decided to take a trip to IKEA, where I ran across this “stand”. It’s actually meant for a sink to go ontop but I cut out a piece of MDF wood plastidipped it white (since it’s water proof) placed it over the top, placed tank and would you look at that custom made for under $100, and in my eyes looks just as amazing as a aquarium stand and perfect fit for the waterbox 10g.

Next the aqua scape, I wasn’t too happy about, I tried adjusting the rock many diff ways with nothing that really tickled my fancy. So I know in a nano tank less is more so I started breaking the rock apart hoping to get better shapes and sizes.

What I ended up with was a floating rock that will eventually turn I to a floating reef. I used crazy glue (gel kind) along with some fish epoxy putty forgot name of it to attach rock to each other. Left it over night to cure.

Next I mixed my Water places heater in added my ammonia and bacteria to start the cycle. At the time I had a power head from my previous 60g tank that I put in the nano just to get the water moving (even on the lowest setting it was too much flow)

So at this point the tank is being cycled but the water is evaporating kinda quick. Me being me I went ahead and designed something quick and easy, some clips that I could attach to the sides to be able to put some sort of lid. I remembered I had some left over plexiglass which I cut and placed over and to me it looked pretty darn good. Aside from that I wanted to see if I could buy a smaller power head or do something that requires no power head and that’s when I came across these RFG. Printed some out diff shapes and sizes, and to my surprise they seem to work really well to where I ended up taking out the power head.

After waiting a month or so I got my light. I was gonna go with the AI 16HD prime light but got a good deal on this coralbox light which pretty much is the same just less expensive and so far I’m liking it. Easy to use and programable as well.

Couple days pass and I’m getting tired of manually topping off the tank so I remembered I had a aqua lifter in my 60g that I was using for dosing, so I fired up the 3D printer designed a quick bracket to hold a float switch, cut spliced solder wire to switch and now have a cheap inexpensive ATO! I placed an order for a 2nd float switch to work as a safe switch that if for some reason my ATO switch stays on the 2nd one will turn off the system once it reaches a certain water level. So there will be more to that in the near future.

Currently I am waiting for the cycle to be over with to add a fish or two as the wife keeps asking when are we gonna get a fish and not just have a tank full of water.

Attached are pics I took from what i could, beginning to current state . 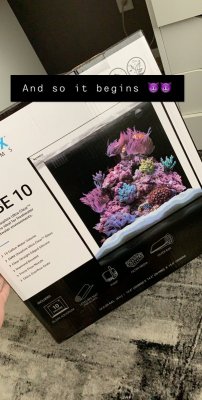 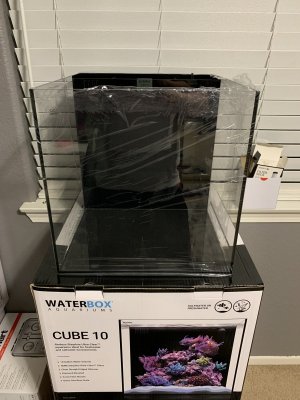 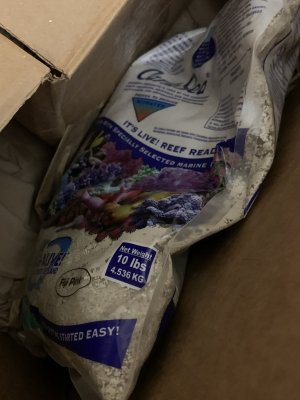 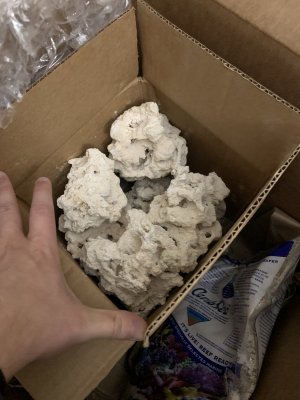 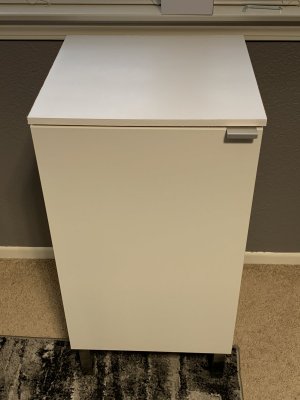 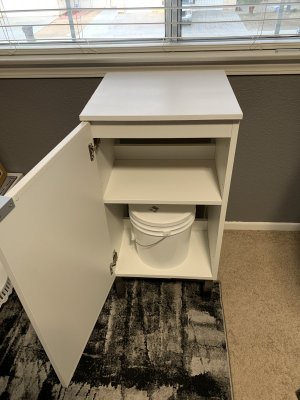 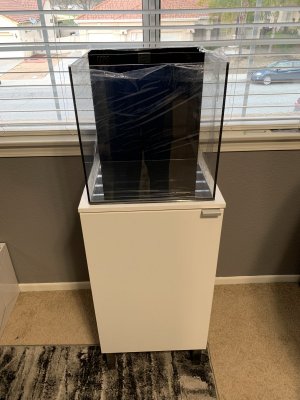 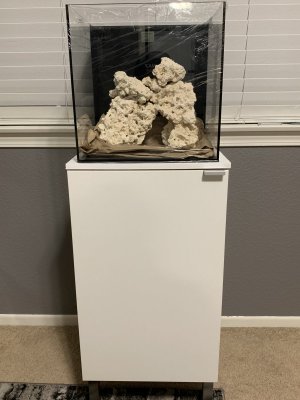 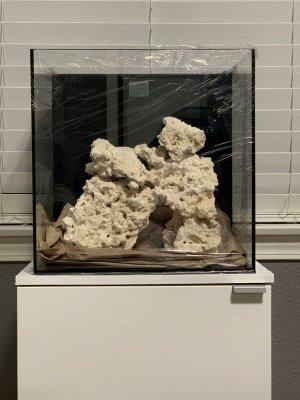 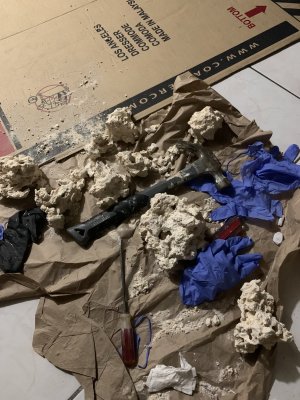 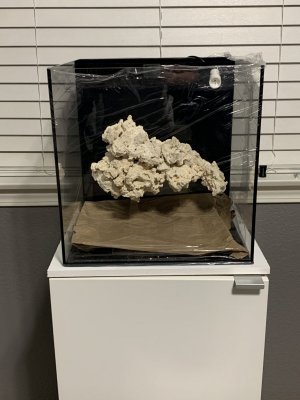 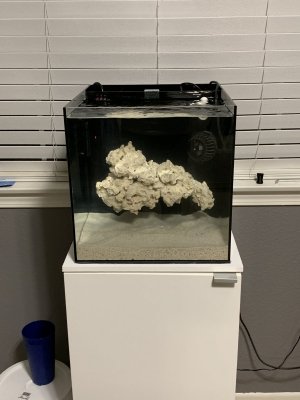 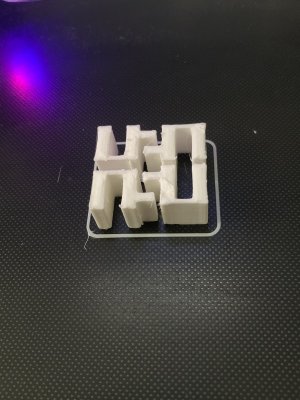 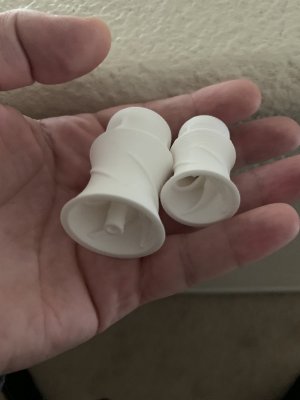 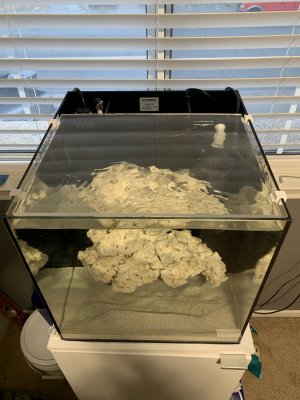 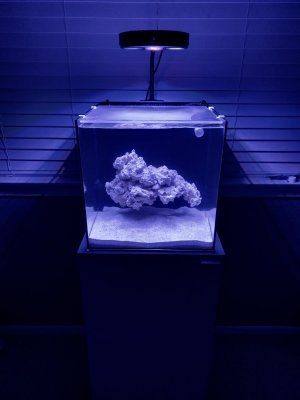 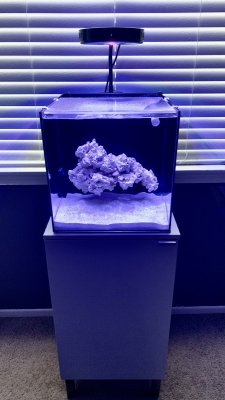 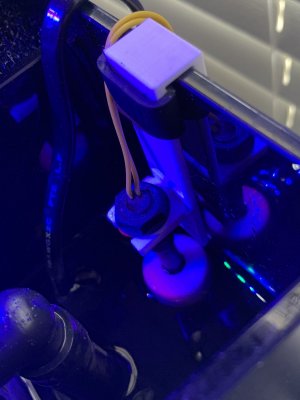 Keep us updated on the stocking list, nice Car too.

nice scape! I'm about to rescape my nuvo 10 into a floating reef!
How did you do yours!?
OP

I bet ! They are listening too haha. I gotta say having a 3D printer comes in handy for sure.
Will post updated pics on the build as I go .. have a couple things that I will post about soon, and thank you I appreciate it. It’s my “adult” car hah
OP

AyeNick said:
nice scape! I'm about to rescape my nuvo 10 into a floating reef!
How did you do yours!?
Click to expand...

Thank you, I was debating on the scape and just ended up following the new trend lol
There are many ways to do it honestly some people drill the false wall and attach the rock to a rod and screw it, I seen some one use plexiglass and glue it to the back but the thing is, it’s hard to glue plexiglas to acrylic without it failing. I decided to pretty much make A little shelf using plexiglass and burying the bottom portion in the sand so you get the illusion of floating rock but without flying anything there for being reversible.
Not sure if that made sense lol

That totally makes sense. How has the plexiglass held up with the rock? I'm guessing you glued the rock to it.

Love your build so far! And the floating rock

G’day from Australia! Nice build there mate, I like the idea of a small tank

DeniableArc said:
G’day from Australia! Nice build there mate, I like the idea of a small tank
Click to expand...

thats not a knife
OP

AyeNick said:
That totally makes sense. How has the plexiglass held up with the rock? I'm guessing you glued the rock to it.
Click to expand...

Gigidoll said:
Love your build so far! And the floating rock
Click to expand...

Thank you, It’s something different and worth the head ache I’d say lol
OP

DeniableArc said:
G’day from Australia! Nice build there mate, I like the idea of a small tank
Click to expand...

Thank you, I started off wanted a PICO tank for the desk (2-3gallons) but ended up getting a 10gallon as that’s good enough to stock with corals and good amount of inverts and fish to enjoy

What were the plexiglass dimensions? Did you bend it?
C

Update, The other day i was sitting staring at a empty tank and was wondering if there was anything that could be placed to cover up all the wires and things hanging from the overflow. I searched and came across some overflow covers that could be purchased. I was thinking about 3D printing a 2 piece cover instead but I remembered that I had left over plexiglass from when I did the lid. I got the dimensions for the overflow and went to work. After it was all done I used black plastidip to paint it. I’m happy with the finished product because in the end it did what it was intended too and that was to cover the wires/overflow, but of course not perfect as I didn’t have the right tools to cut straight pieces. 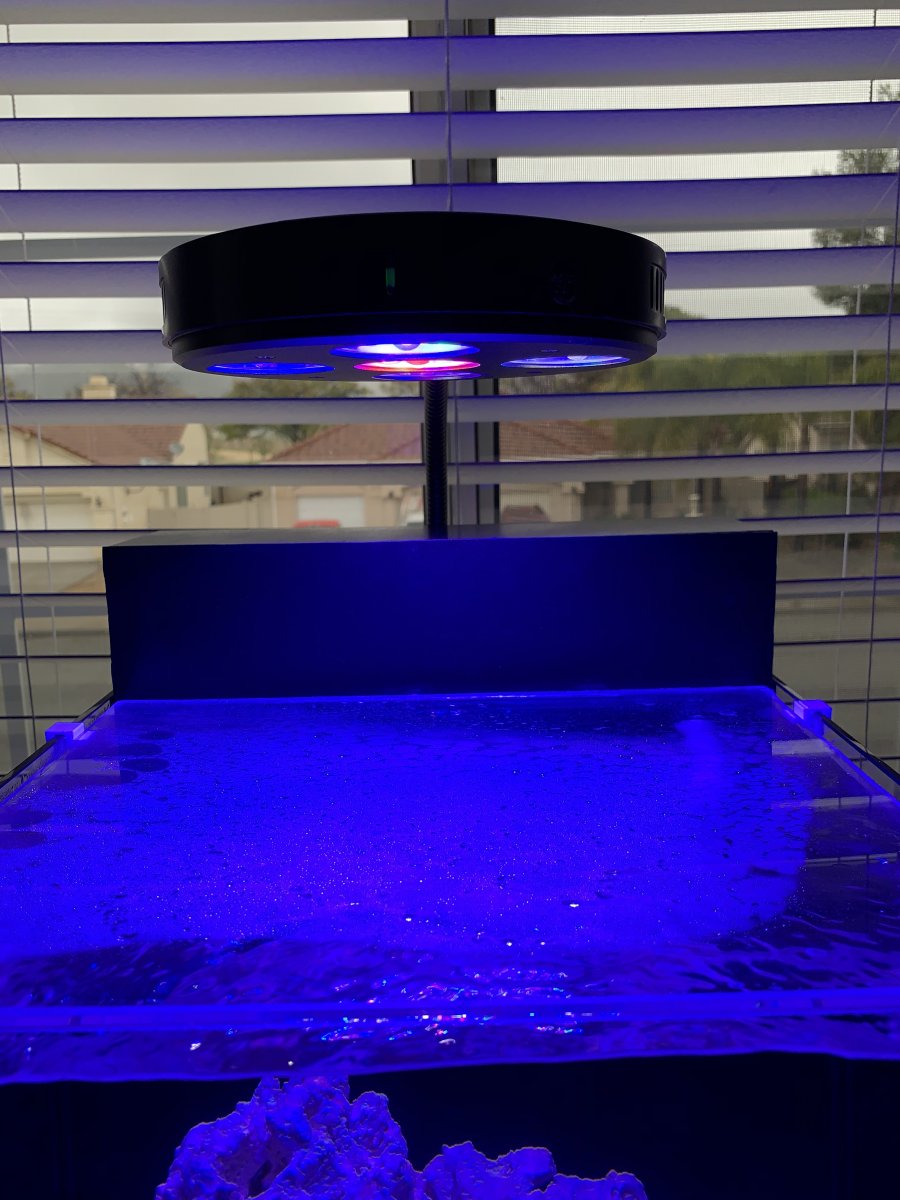 After that was done I wanted a safety switch for my ATO. So I went ahead and ordered another float switch to invert and make it so if the main float switch was to get stuck, the secondary one would trigger causing the pump to turn off once it got to a certain water height. Once wired I went back and had to edit the previous hanger for the first float switch as I needed this safety switch to be a bit lower as I had to flip it upside down. 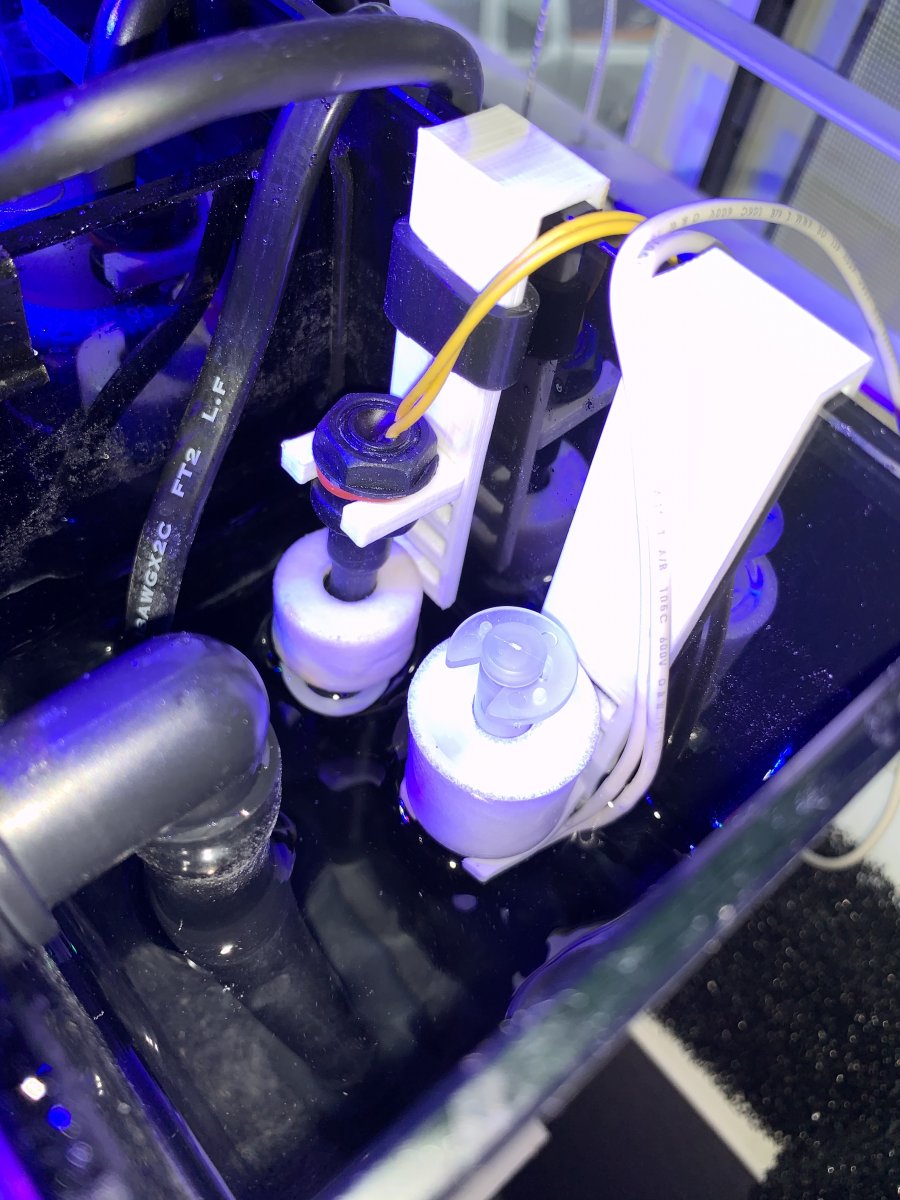 Once all that was done I was browsing the forums/FB and came across a LFS that was open and somewhat close to us. So we went ahead and drove about 30-40 mins away to it . Wife and I were looking at some clowns and all they had on their display tanks were reg Ocellaris ones (nothing wrong with them but we just wanted something fancier/nice for this tank). One of the workers asked if he could help us with anything and I happened to ask if they had any other type of clowns and he said to follow him. We ended up in the back of their store and turns out they breed their own clowns and had pretty much every kind you could think of. Sadly some weren’t ready to be sold but we ended up with some Davinci clowns for a great price !!!
The wife’s is on the bottom left
(white Mohawk lol )
Mine is top right
(Thinking of what to name them still) 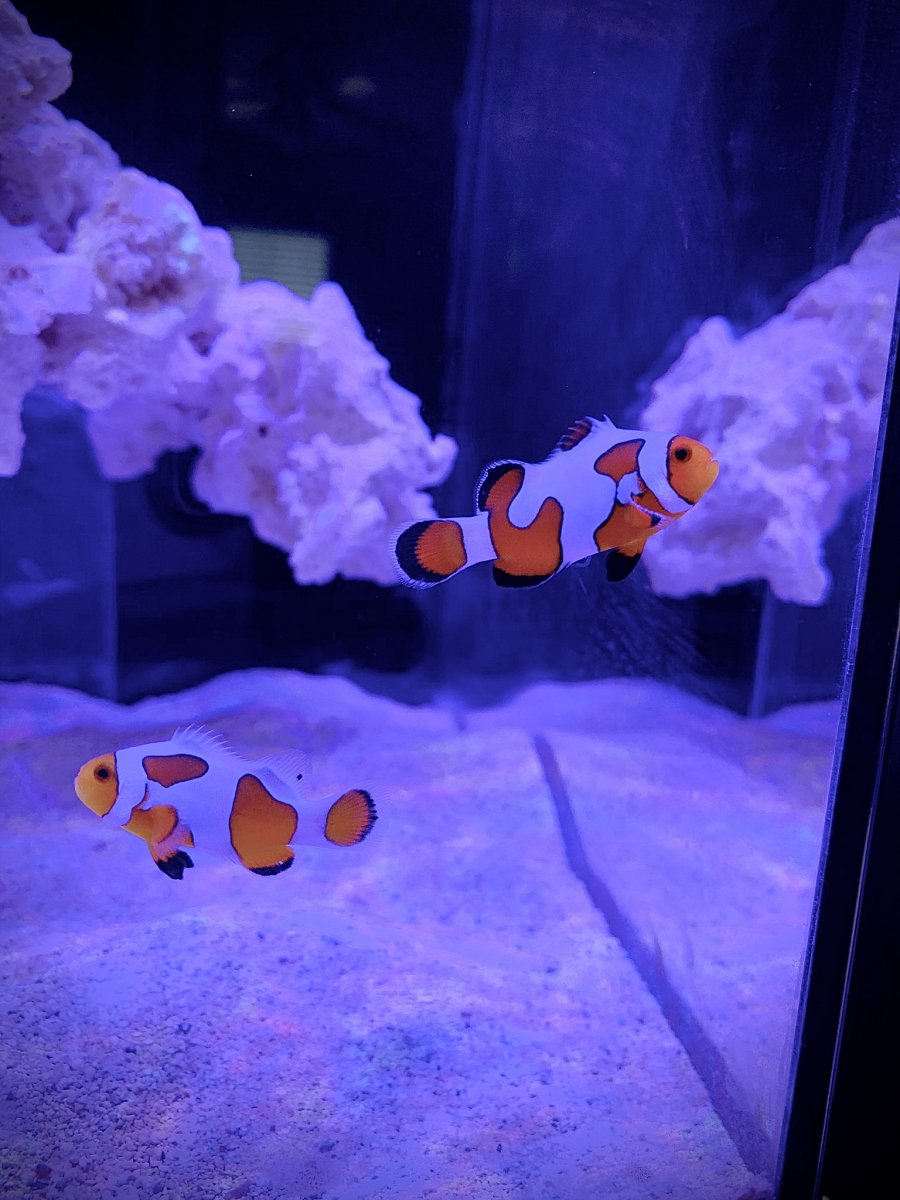 Your the one with the floating scape!!! I saw this on Waterbox’s site. This looks amazing!! Great job!

sharkbait-uhaha said:
Yes I used a mix of crazy gel glue and some reef putty that you find at Petco to get the rocks on the plexiglass and to each other to make it look like somewhat one big rock
Click to expand...

Do you have any photos of how you bent the plexiglass?

sharkbait-uhaha said:
Thank you, It’s something different and worth the head ache I’d say lol
Click to expand...

I think so
Too!!! Looks awesome can’t wait to see more
N

Nanoreef13 said:
Your the one with the floating scape!!! I saw this on Waterbox’s site. This looks amazing!! Great job!
Click to expand...

Yea they posted me a while back on their story lol
Thank you.