Hi there. So I’m jumping into the hobby again. Got my first taste around 2014 on a whim. Back then I didn’t realize the pit this hobby is and quit shortly after. This time, a little better prepared, I’m looking forward to building something as beautiful as some of the reef tanks I’ve seen on here.

After a bit of research I settled on Waterbox and went with the Marine X 110. Luckily for me it was around the November time frame and orders were on back order for over a month in which time I called and upgraded to the Reef 130.4 (great customer service by the way). The tank I had in 2014 was a 75 gallon bowfront DT and I always wished it was bigger. 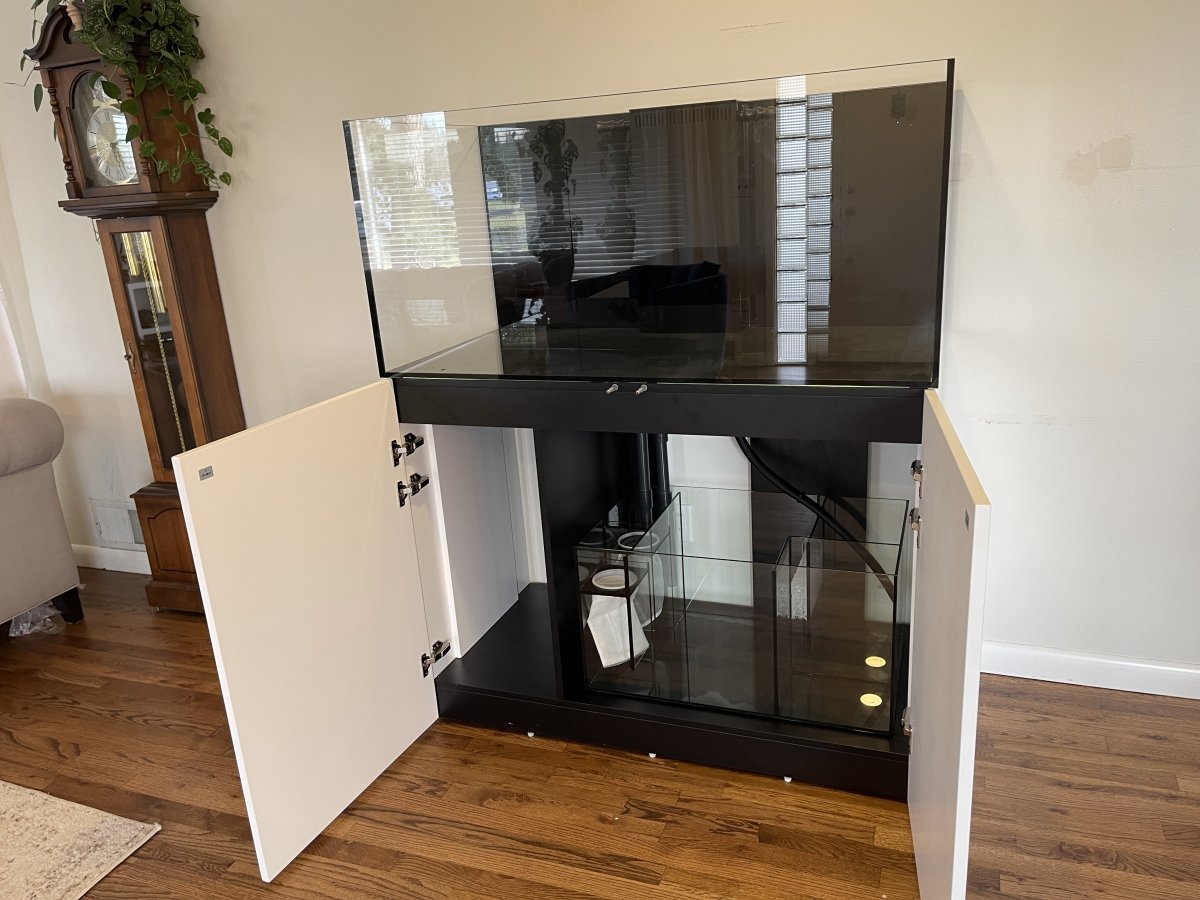 One of the best things I did so far was wash my sand. I went through that jumbo thread and decided to do it. Am now a believer. The Fiji Pink is white and doesn’t blow around and went clear right away. I did add some Bio Spira plus whatever was left after washing the sand got the cultures going.

I got 100 lbs of Marco Rock and just about used all of it:
60lbs Shelf Rock
30lbs Foundation
10lbs Reef Saver 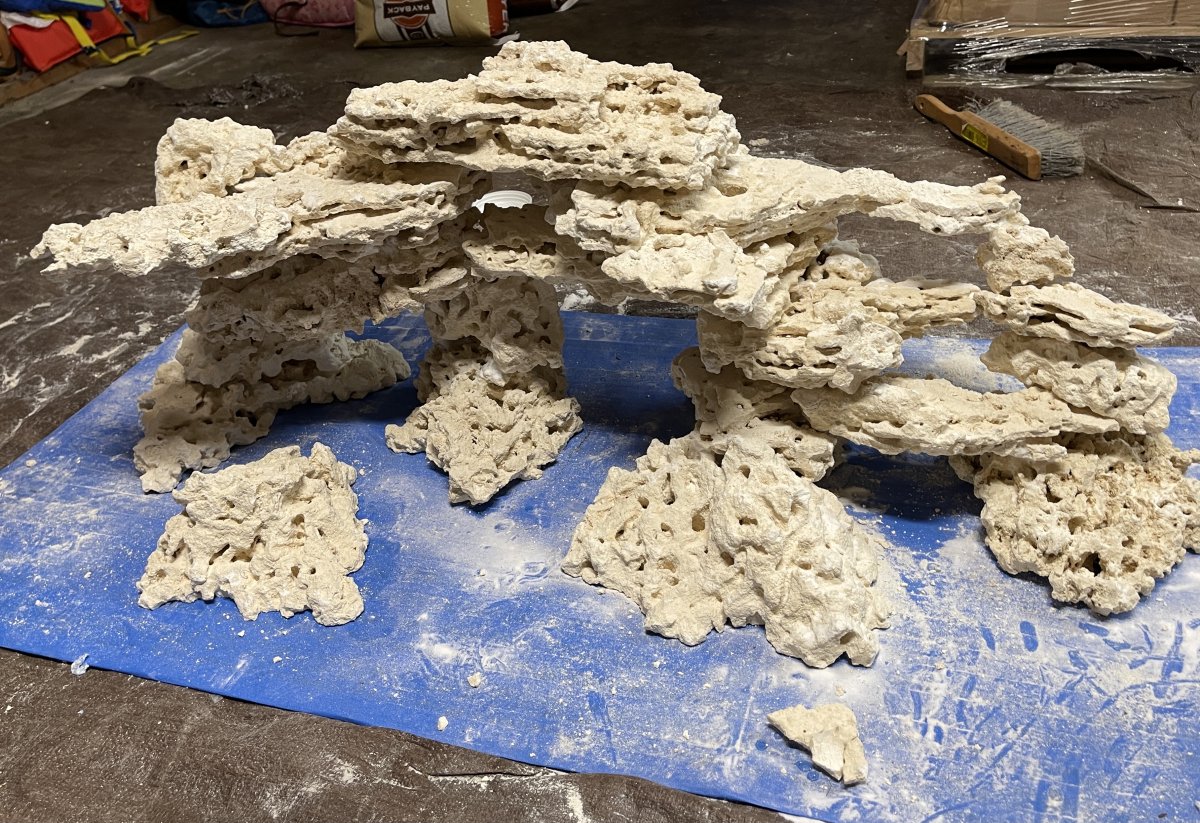 I used superglue and baking soda as the activator. Made sure to blow each section out and washed with tons of RO water. Ended up making some changes once it was in the tank as I made a few obvious mistakes: 1; get down and look at it eye level as that’s how it’s going to be seen in the tank. I built it on the floor. And 2; don’t laugh now, I forgot about the overflow. Made it work though.

I am waiting for some parts to swap out the Syncra Silent 5.0 with a 7.0 WiFi version. I got the 5.0 with the intention of buying the smaller Waterbox 110 but figured I could/should upgrade if I want SPS plus any additional gear that would call for the extra flow. Plus WiFi is nice. Same story with the Simplicity 240DC skimmer. Hopefully it will match up decently with the bigger tank.

I like the lights but wow, I didn’t expect the leakage. My whole living room glows blue, I ordered diffusers but doubt that will make much difference. They are on the standard RMS brackets so can’t adjust height. I’m open for suggestions.

I absolutely want a refugium and pods. That’s one bummer about the smaller Waterbox tanks, that they don’t come with one, and I want to utilize the ATO reservoir so I ended up getting 1/4” black acrylic and making a baffle. 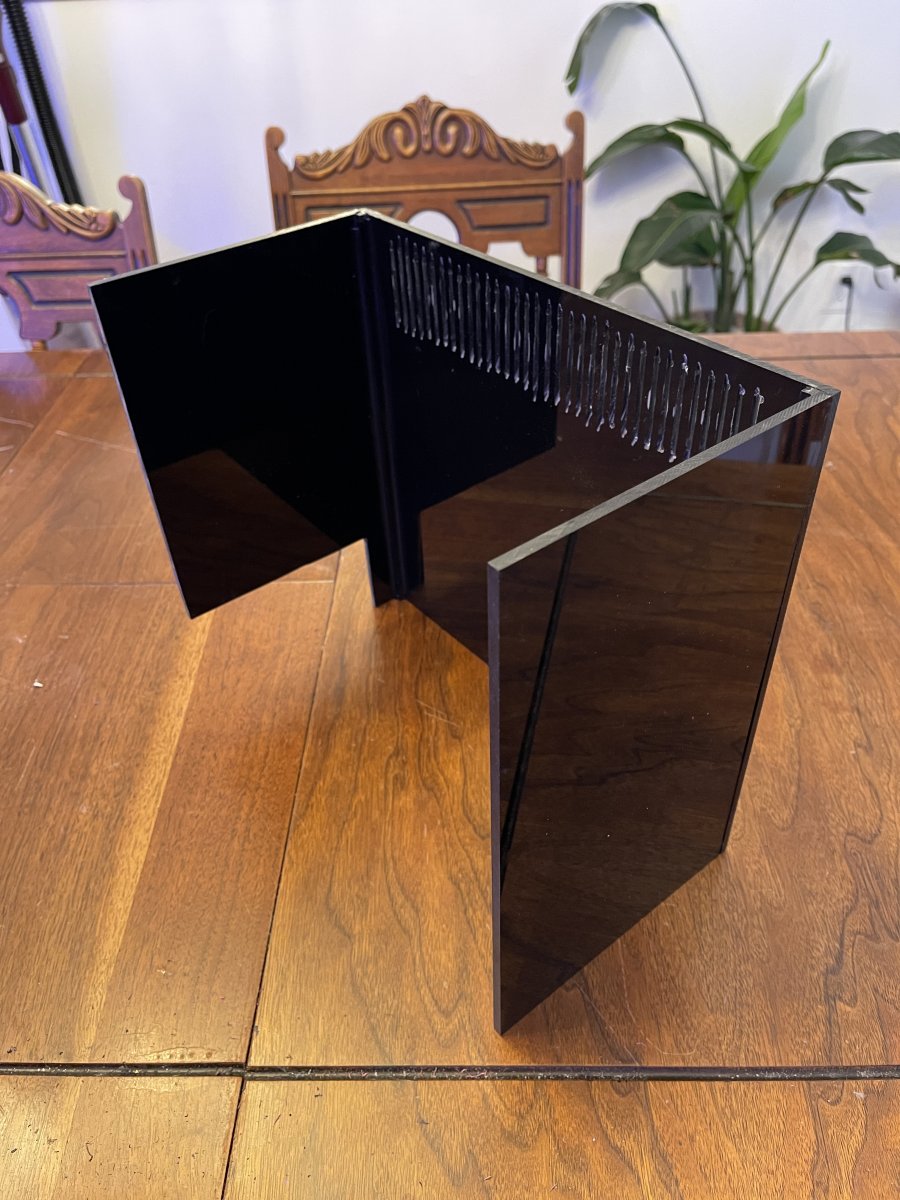 Fits nicely, I’ll take some pics later. It’s not big but I figure with a good light and some copepod hotels I should be alright. I purposely blacked out the sides to limit algea growth, we’ll see how it goes.

Current livestock:
1 Chromis
1 Domino
1 Three striped damsel
1 Yellow tail
I originally purchased 3 chromies and lo and behold, one made it. Uronema as far as I can tell. Everyone else seems to be healthy.

Currently working on a controller board and led’s. Will keep updating as I go. 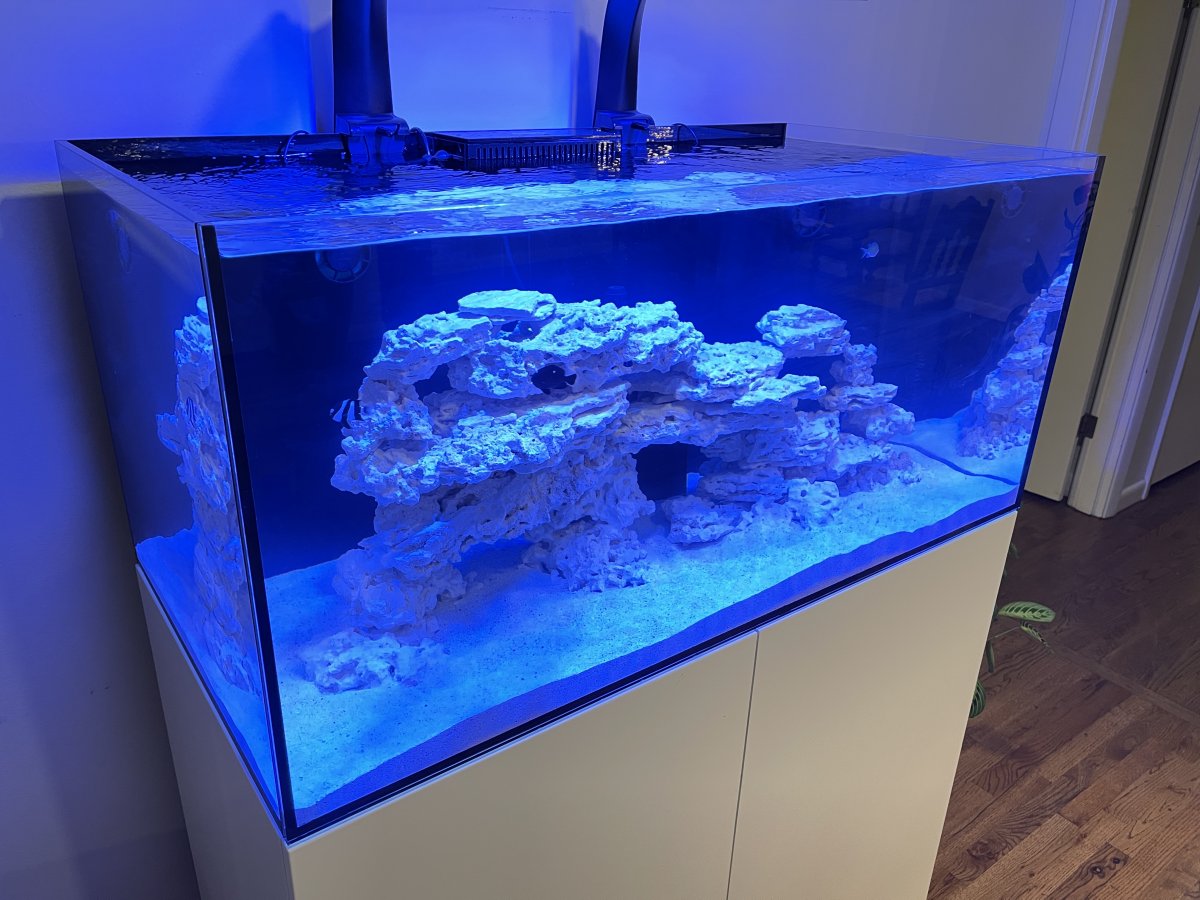 So I got the Kessil H80 with the controller, some copepod hotels and chaeto. Have a decent consistent tumble, the diy fuge baffle is working great. Just ordered three types of pods from pod your reef. Ended up ordering a reducing insert to make the Syncra 7.0 fit the return hose. Still not too thrilled with the Simplicity, anything above setting three it sounds like an unbalanced impeller. Definitely noticeable when it bounces from a smooth hum to the slight rattling noise. Will give it a few more days. 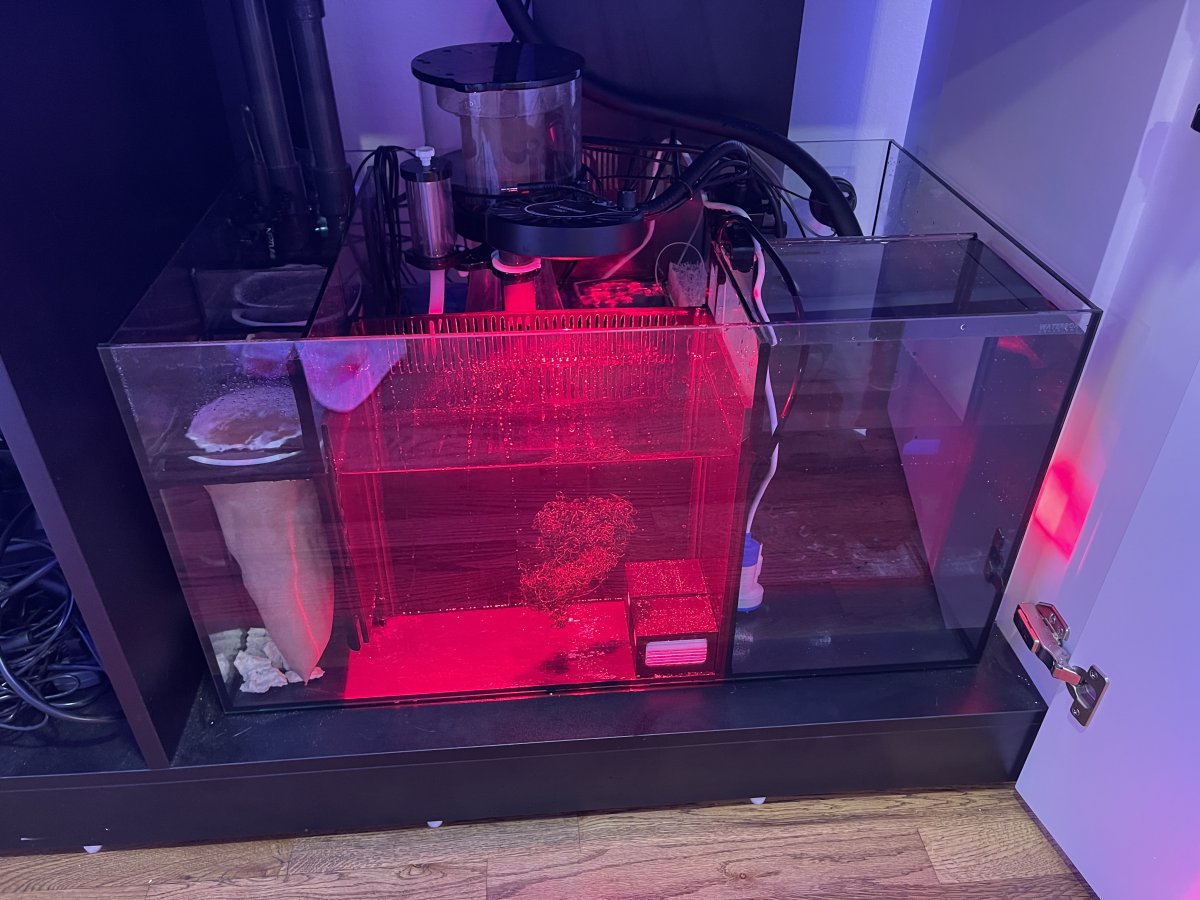 How did you do the “diy fuge baffle?” Was it from a kit or did you just go to a hardware store and purchase some acrylic?
OP
S

justindrocco said:
How did you do the “diy fuge baffle?” Was it from a kit or did you just go to a hardware store and purchase some acrylic?
Click to expand...

I got all the parts from Amazon. 1/4” thick black acrylic plexiglass and black aquarium silicone sealant. Had to glue 1/4” thick strips inside the sump to hold the baffle in place so the whole baffle slides in and out easily.
J

SundownReef said:
I got all the parts from Amazon. 1/4” thick black acrylic plexiglass and black aquarium silicone sealant. Had to glue 1/4” thick strips inside the sump to hold the baffle in place so the whole baffle slides in and out easily.
Click to expand...

Thanks. Was that cast or extruded acrylic? What was your method of cutting the slits? I'm looking to do something similar.
OP
S

justindrocco said:
Thanks. Was that cast or extruded acrylic? What was your method of cutting the slits? I'm looking to do something similar.
Click to expand...

I used a 4-1/2” grinder with a cutoff disk. I don’t recommend using something like a multitool as it takes long to cut and heats and warps the acrylic. On the baffle I used the silicone sealant to make it water tight but ran a bead of superglue and sprinkled baking soda as activator to hold it. Especially if you’ll be taking it in and out of the sump later, silicone doesn’t stick too well on acrylic in the long run. I originally used the same cutoff disk for the slots but later went through with a slightly thicker (1/8”) disk to open them up a bit for better flow.