So the deal was with the wife, new condo, new tank. Seemed fair to me. After deliberating between a Red Sea and IM, we went with IM due to stand and availability. I currently have an Aqueon 75 gallon reef ready but the stand casing is falling apart, it is too big for the apartment and I want to go rimless.

My newly bought items
- IM 75 EXT aquarium. 2 returns, 3 drain holes
- IM APS stand in black (wife is trying to get me to paint it white, open to suggestions*)
- IM ATO - 5 gallon
- Fiji Cube - Fiji-20 Advanced Sump (https://www.bulkreefsupply.com/fiji-20-advanced-reef-sump-2nd-gen-fiji-cube.html)
- IM ATO controller
- Gen 4 radions x 2 with a DIY hanging thing I will try. Let me know if you can see it working or not. Link below ()
- Acryli Made 3 dosing resivoir ()
- Red PVC piping for ReefPVC.ca
- 2 schedule 80 gate valves from Amazon (1")
- All other plumbing parts schedule 80, grey - from https://www.petrampvc.ca/order/
- 48'' x 24" piece of white acrylic for Apex mounting board but I have on 12" of room

I will be getting the keys for the new place next week and hope to be setting the tank up immidiately. I will take 3 days probably to get everything done but told the wife 2 because we are moving and things are chaotic.

Couple of questions for the IM stand people out there
- What size is the IM aluminum T-slot. I would like to add some bolts for hangining a fuge light and a Apex control board panel. Is it 80/20?

Anyway more pictures to come once I get going. 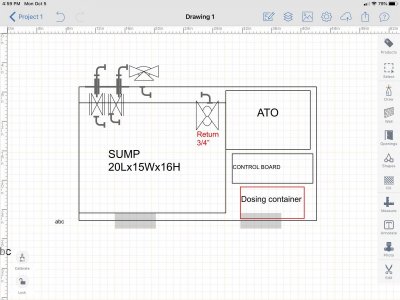 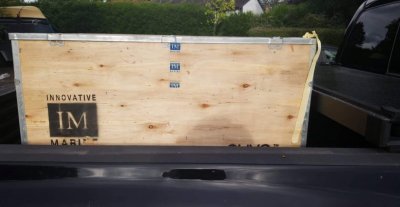 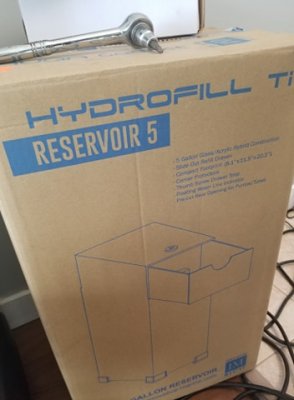 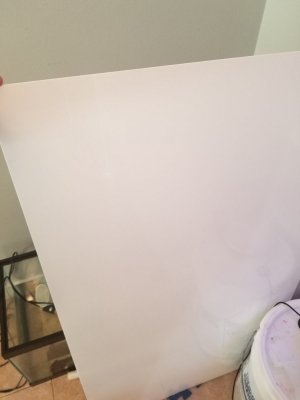 Its not 80/20 exactly but will work with tnutz 10 series tnuts and whatever extrusions you'll need. I used the roll in kind so I didn't have to deal with taking the stand apart. It was a headache enough putting it together the first time lol.

Hey, I'm potentially looking at getting this same sump for my INT-75 that's coming next week. Have you set it up yet? What heater are you planning on using
OP

Bcheek said:
Hey, I'm potentially looking at getting this same sump for my INT-75 that's coming next week. Have you set it up yet? What heater are you planning on using
Click to expand...

Hey! It is a fairly decent sump. It is very aesthetically pleasing first of all. Second, it fit the tank and stand shape and allowed room for either an apex control board or the IM ATO reservoir. There were a couple of issues with the bulkheads I received with the sump so I ended up having to replace both of the 1" bulkheads. I like the two drain bulkheads which are perfect for the tank set up. In the skimmer section, the removable top had another cut out that fits a 1" sch 40 pipe easily that I use for the drain line. Right now I am just using an Ehiem heater but it is too big for the sump so I will probably upgrade if I ever financially recover.....

Awesome thanks for the breakdown

So I got a little side tracked with this build thread so I will pick up from where I left off. Tank is on the stand sitting dry in my new place. No furniture, just a fish tank. I wanted to mount the lights prior to water in the tank to be on the safe side just in case I got clumsy however, after purchasing the Radion hanging kit, I realized that the ceilings were concrete. Of course, why wouldn't they be considering the whole building is. Stupid on my part. After much debate and not wanting to drill into concrete, I decided to go with the tank mount from EcoTech. After hitting my LFS, they only had the new Radion mounts. I was unsure whether or not they were for the Gen 5 only but, it turns out they work fine for the Gen 4 too.

Stand
While nice, this stand was a pain in the butt to put together. Very high quality though. I received extra d-posts (front to back supports). I called IM to see what they were for and they said it was to help support the sump as people were complaining there was no support. I just used a piece of Styrofoam that came with the stand. 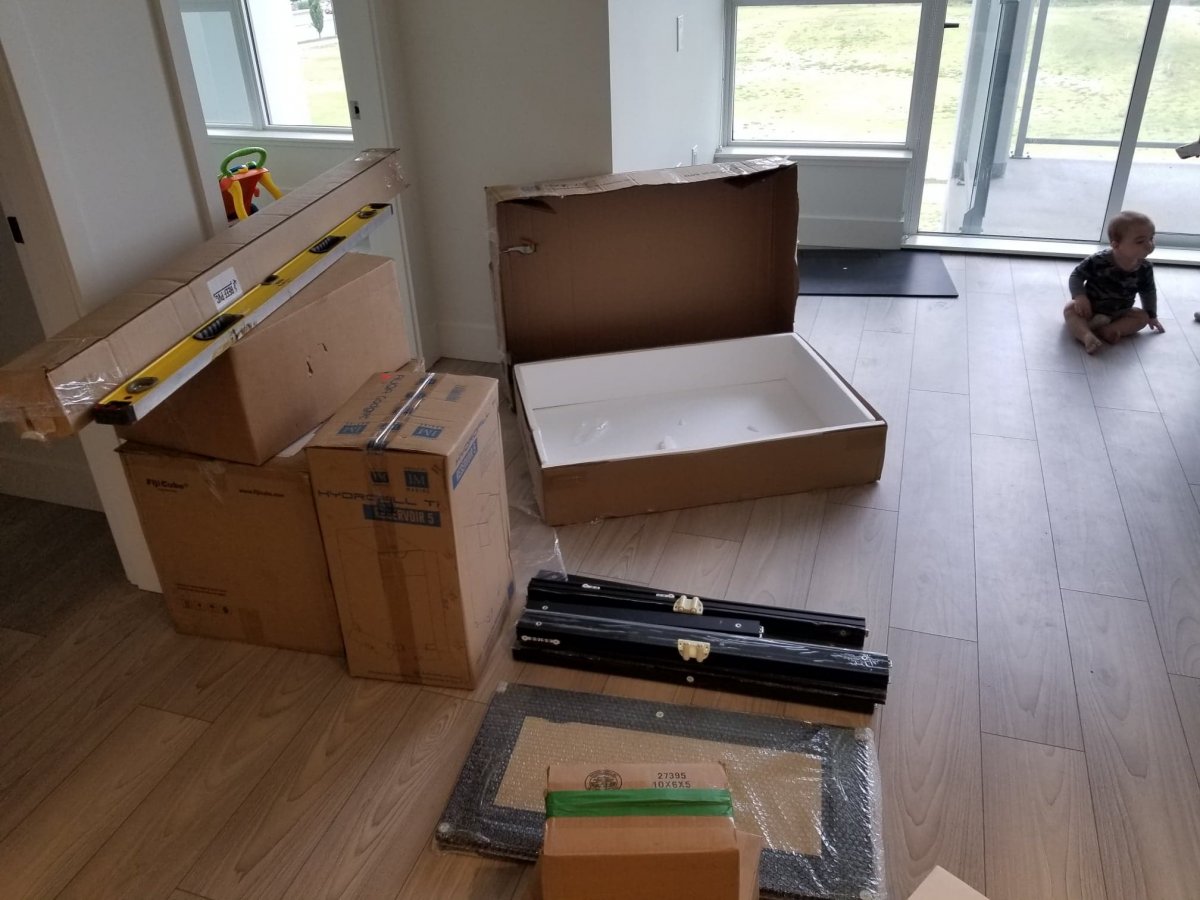 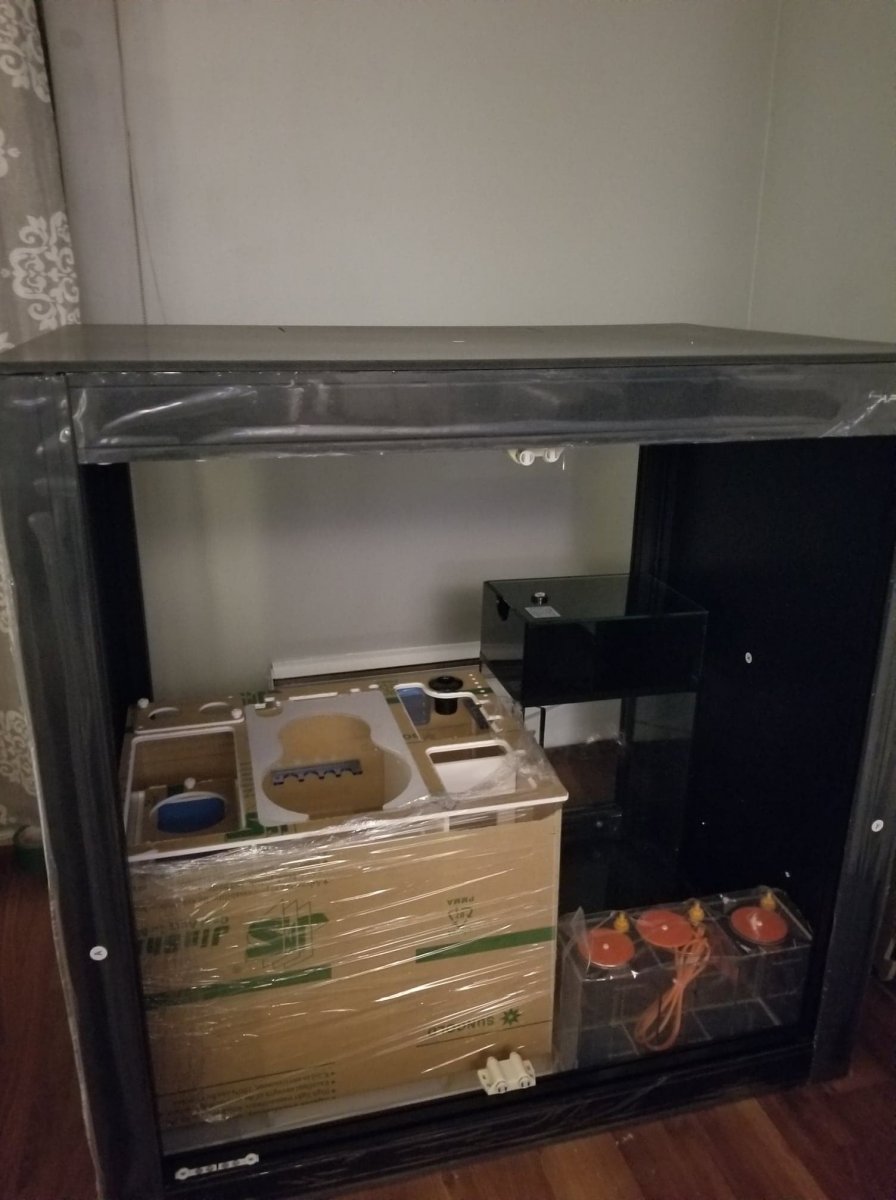 Of course, I wanted to make sure everything fit. I quickly set it up in our old place "just to make sure'." A good excuse to be able to stare at it for a week or so. 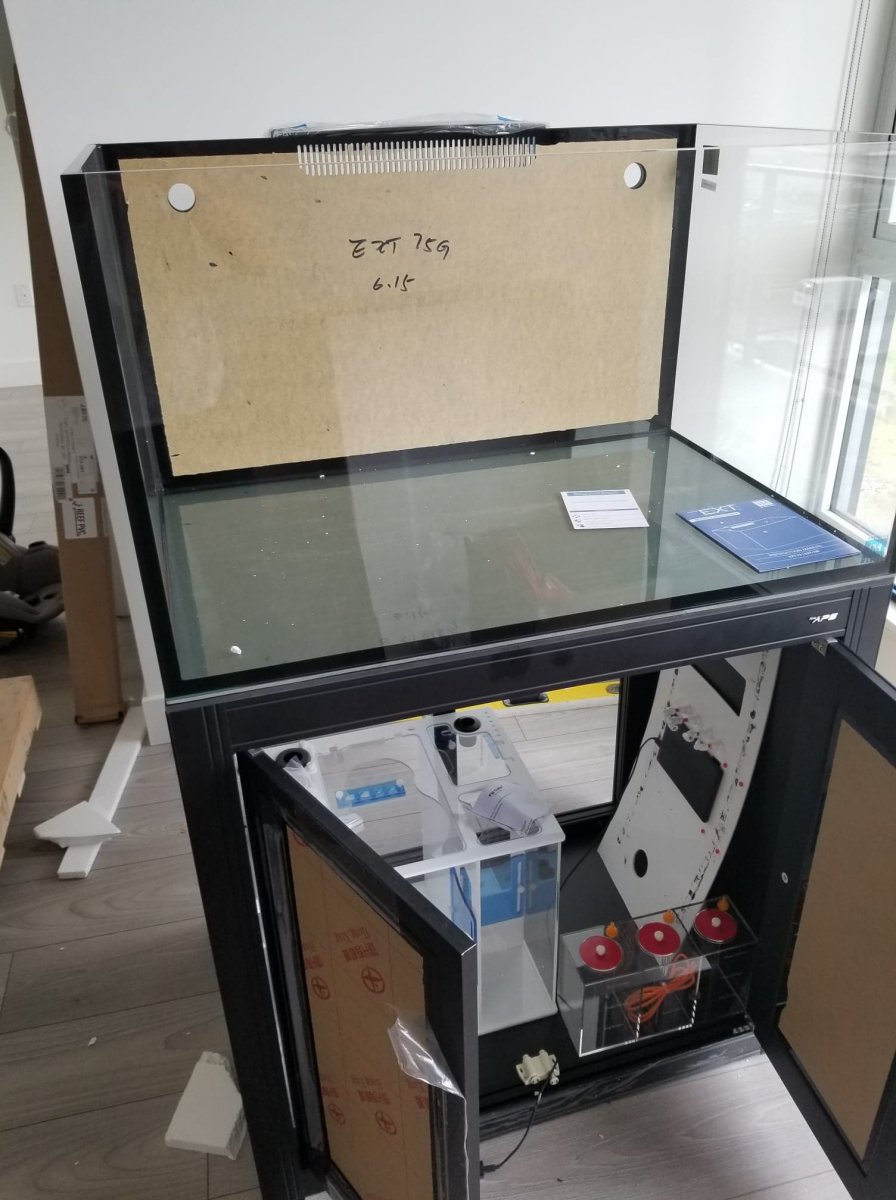 Sump
I went with the FIJI Cube 20 Advanced. After I purchased the sump, I have noticed a large amount of people using the IM series chose the same. Let me know why you chose that sump or another one. I think for the Fiji Cube a lot of people bought it because of the drain line bulkheads (2 x 1" with emergency drain) and the return line. Everything is just very compatible. It also fits nicely and has a variety of features. Not to mention, it is very nice to look at. The sump arrived and looked great. Bulkheads suck on it so I replaced those. Only problem being is the Lifeguard bulkhead did not fit in one of the cutouts.... weird. I had my wife sanding the inner side of the hole at 0200 to help squeeze the bulkhead in there. Eventually it worked. If that is not love, what is.

Plumbing
The next day was the plumbing. Everything had a arrived early which was fantastic. I am in Vancouver, BC so I used www.reefpvc.ca for the piping and www.petrampvc.ca for all the fittings. Both are great suppliers and ship very quickly. With the stress of the move, my fish and coral in temporary tanks, and a 9 month old baby, I new my time was limited I got to work dry fitting with white PVC piping. I like a few designs I saw but was having trouble keep a balance between; keeping it clean and simplistic, accessible and room for growth and leaving room for algae scrubber, reactors, UV sterilizer, and ATO.

Return line went in well. I kept it very simple with 2 T's. The first T will split one to the back and one to the front. The reactors will be in the front. I plan to have 3 half inch lines. One for an algae scrubber (external), one for the Aquamaxx reactor for carbon that I will be hard plumbing and the other is yet to be determined. I have central AC and heat so I don't think I will need to use my chiller. I may use it as a secondary line for a kalkwasser reactor or something else down the line, who knows. 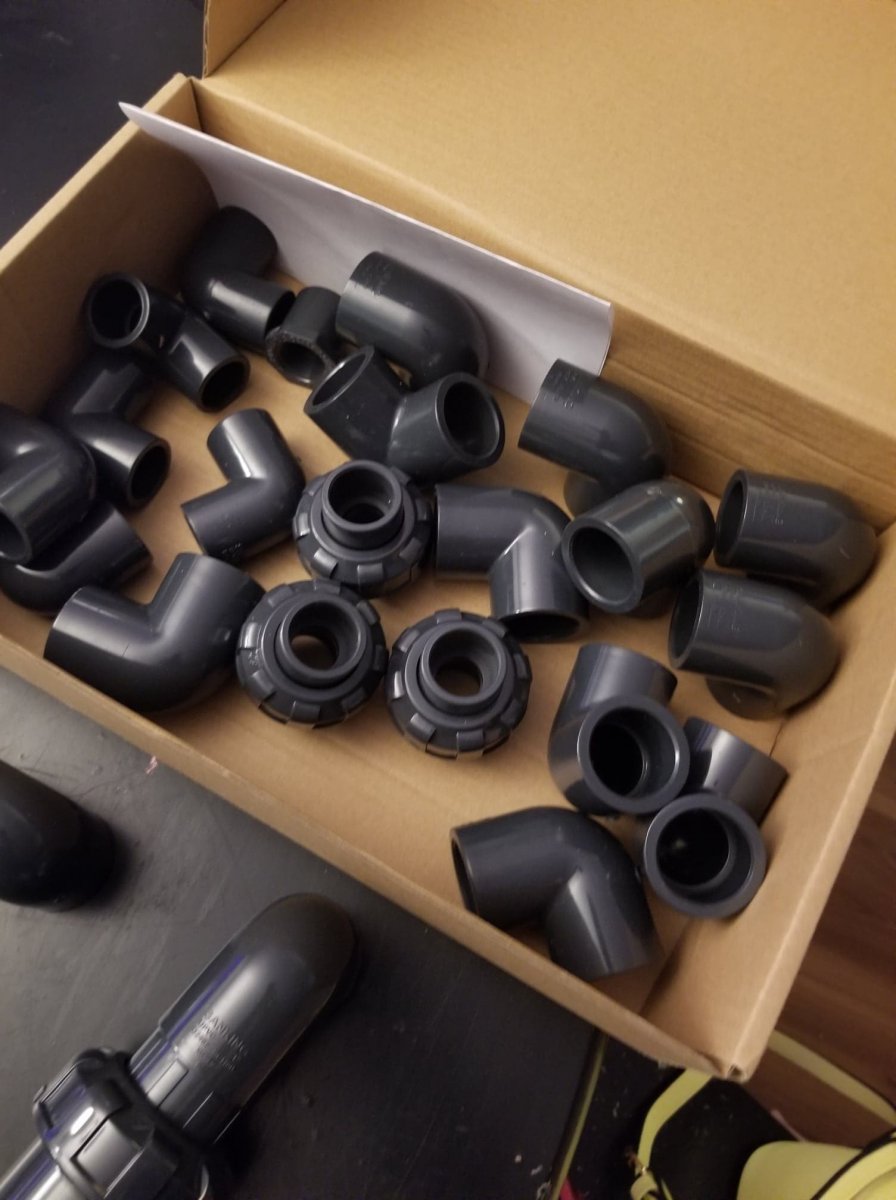 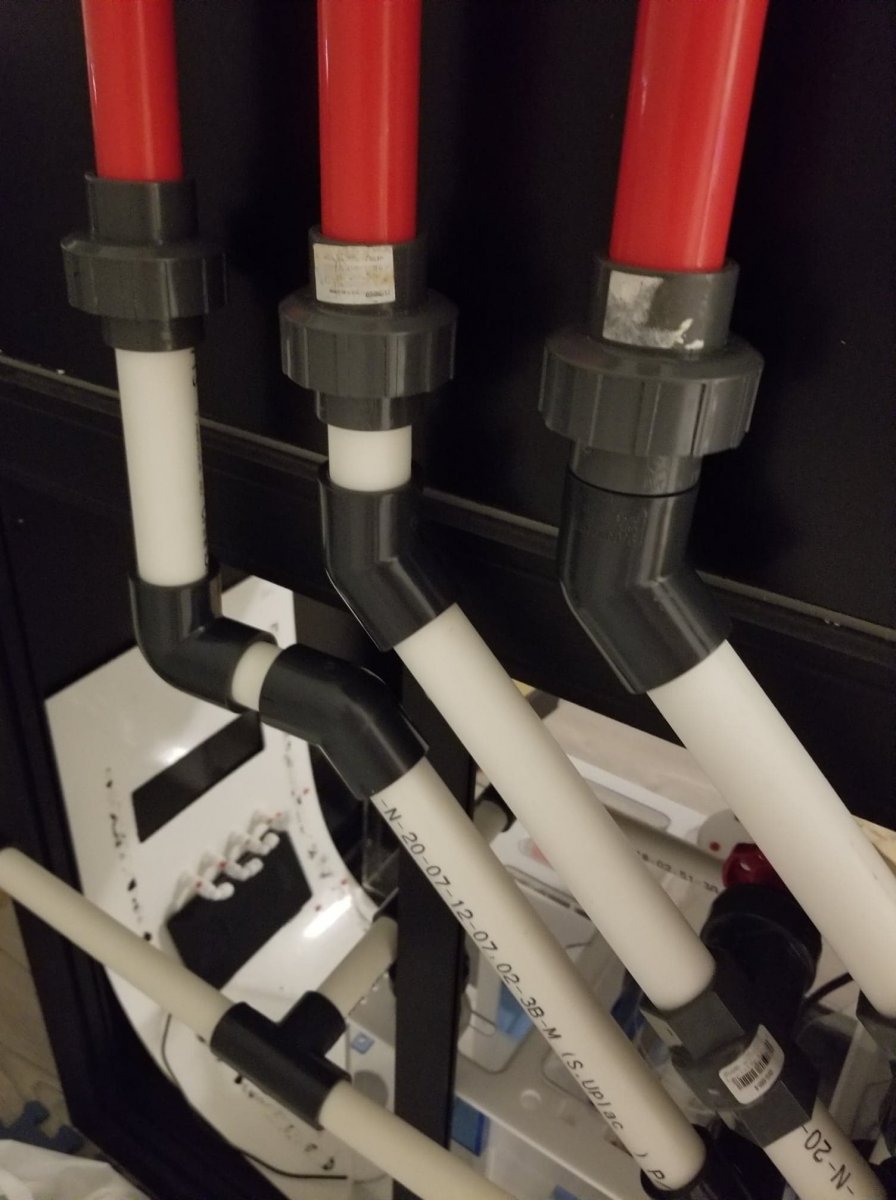 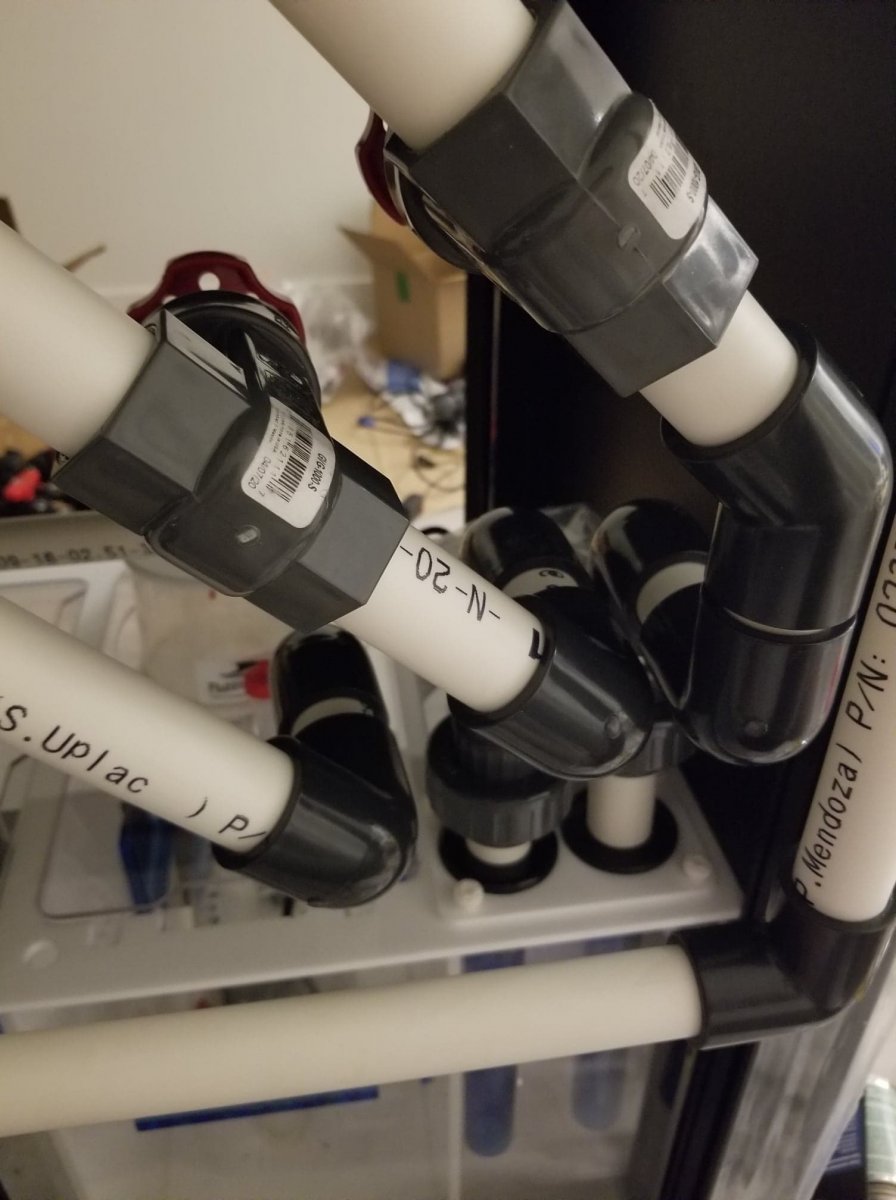 Mistakes and Regrets
I will admit the following - plumbing at 0300 is basically *never* a good idea. I am a paramedic and had been working night shifts for the previous 2 nights. It turns out, being a paramedic takes less brain power than plumbing my reef tank. Sometimes.....

By the end of the night, I had a small graveyard of wrongly glued fittings and one valve. By the time I was done with it, I had one working drain line and an emergency line. I was quite distraught after realizing that I have ruined upwards of $200 in plumbing parts so I decided to sleep on it.

The next day I went back and replumbed the next drain line, but unfortunately, was short on fittings. I decided to table the rest of the plumbing realizing that I had enough to at least get the tank started and cycling. I plugged one of the drain holes. I will be redoing the drain lines and emergency line at a later date hopefully soon. 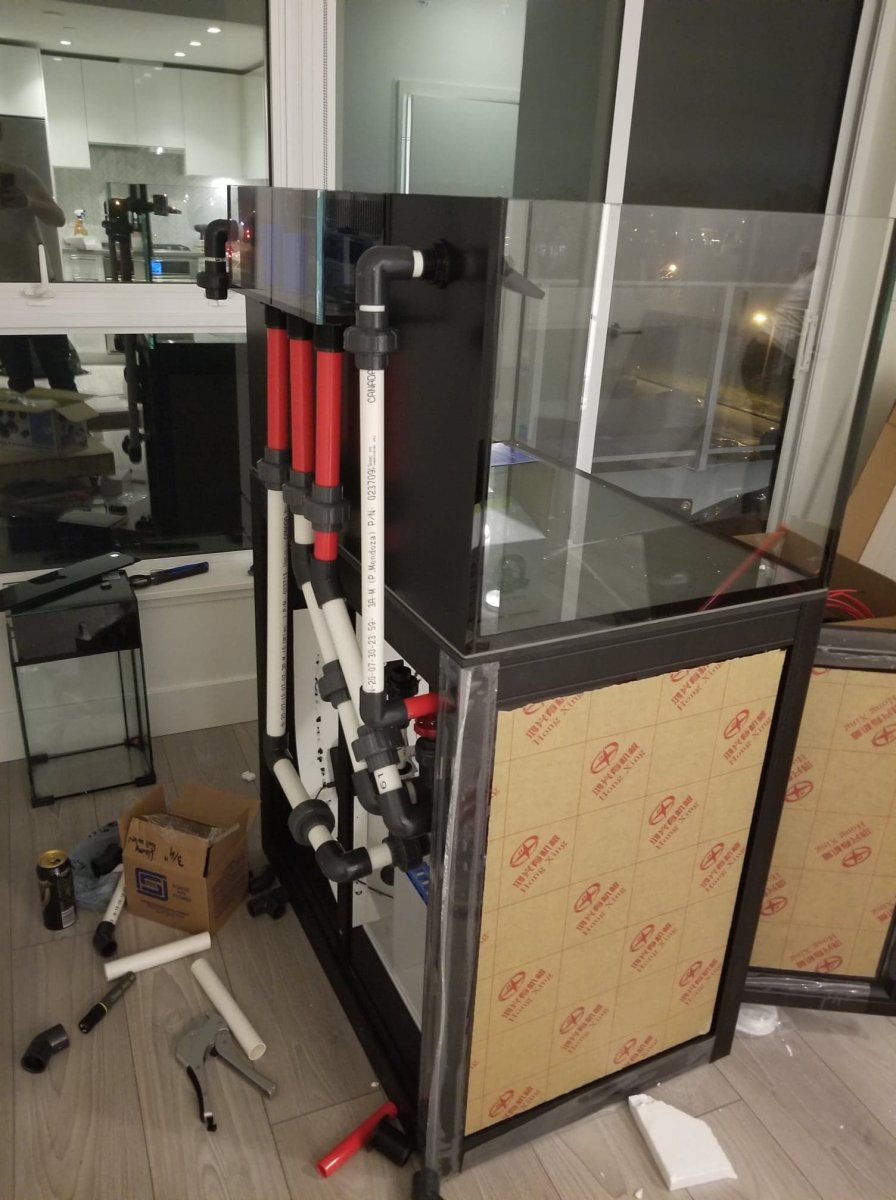 *Note the Guinness on the left. As important as the PVC cutter for the job.* 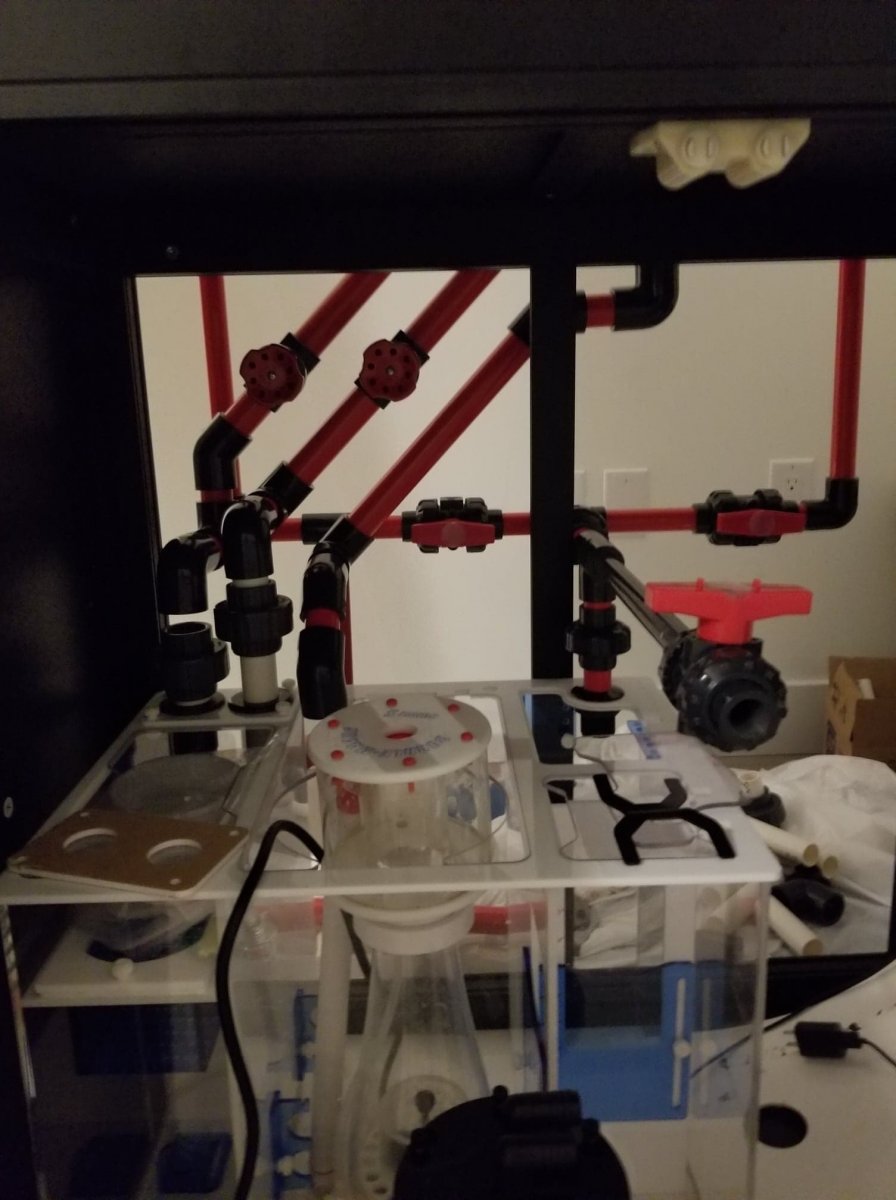 The lines running up the sides for the returns are 3/4 inch. The line on the left has another T that goes out to a Coralife UV sterilizer. 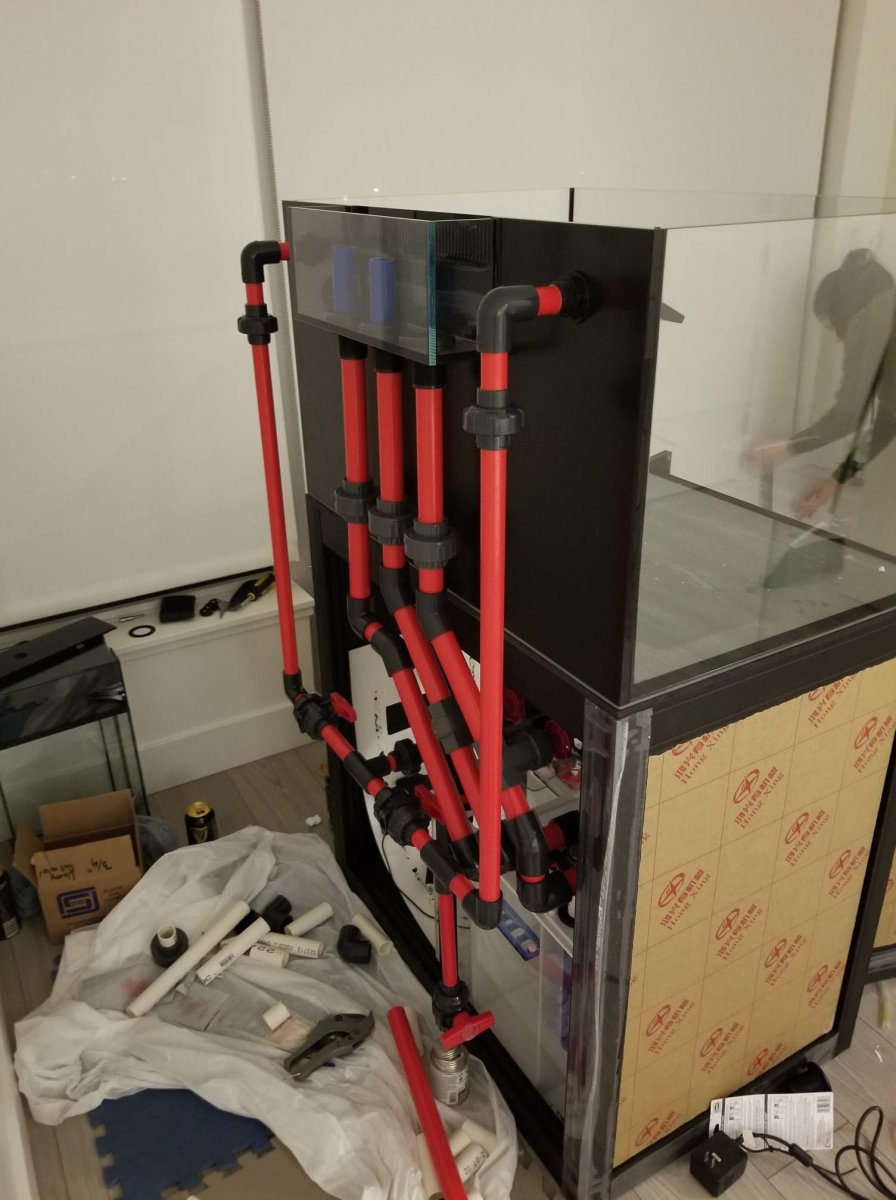 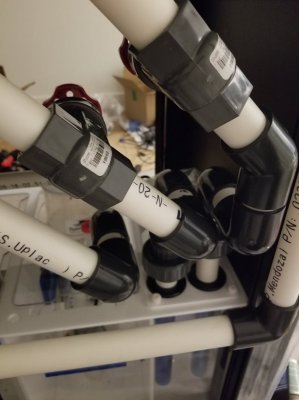 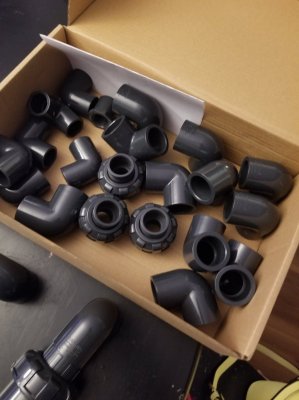 Electrical / control board
So with the plumbing done for now, lights mounted and tank in place. I began with the electricals, including the control board. I have this thing that I do called DIY. DIY for me at least is where you try and make something yourself, it does not work out and you end up spending more money than you would have. Then, you go and buy the thing you’re trying to replicate. Unfortunately, this was the apex control board.

My goals were simple; easily accessible but hidden and organized wiring, cool looking and easy to navigate. I got a piece of 1/8” acrylic. It was cheap and an off cut at my local plastics store. My plan was to reinforce it to make it stiff which somewhat worked with aluminum U-channel. I cut out a square for the dosing pump and the Amazon Fire (for the screen) using a mini circular saw. It turned out cool looking from a far, but the cuts were not great from a distance. I have clear acrylic hinges that will be used to connect the two sheets and the main board will be able to swing out giving access to wiring. The side panel really keeps up right as it slides in the aluminum profiling quite well. 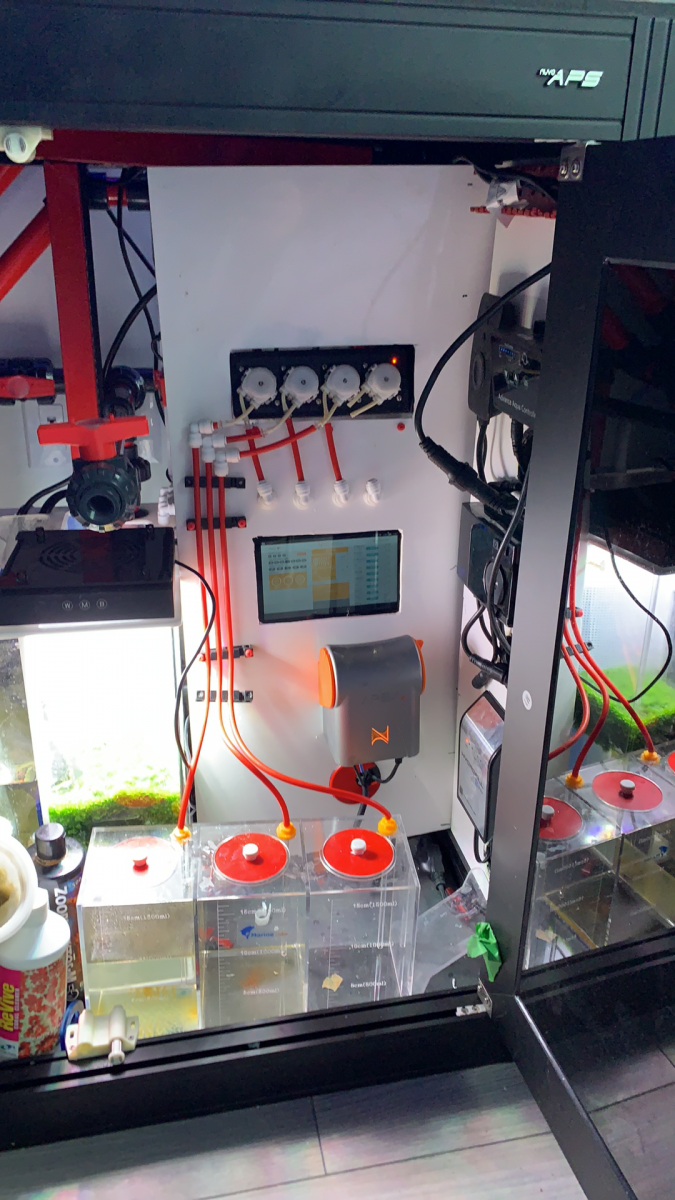 It could look better. But functional for now. I am somewhat happy with the design and plan but it needs work. Suggestion are very, very welcome. 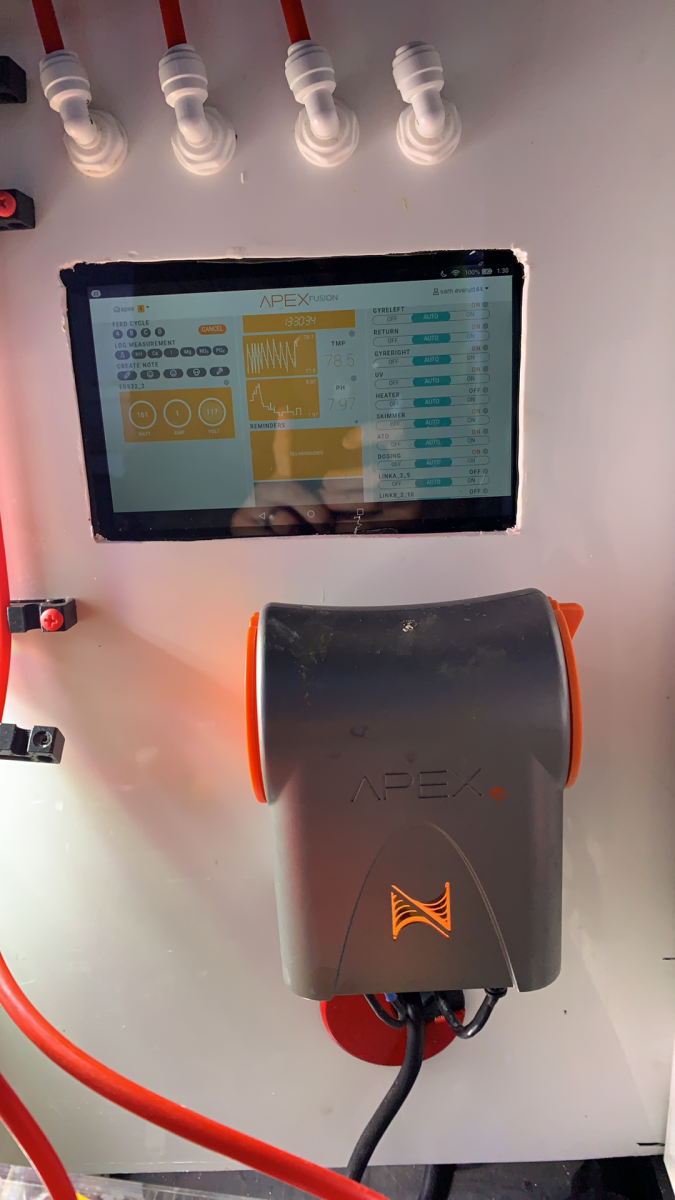 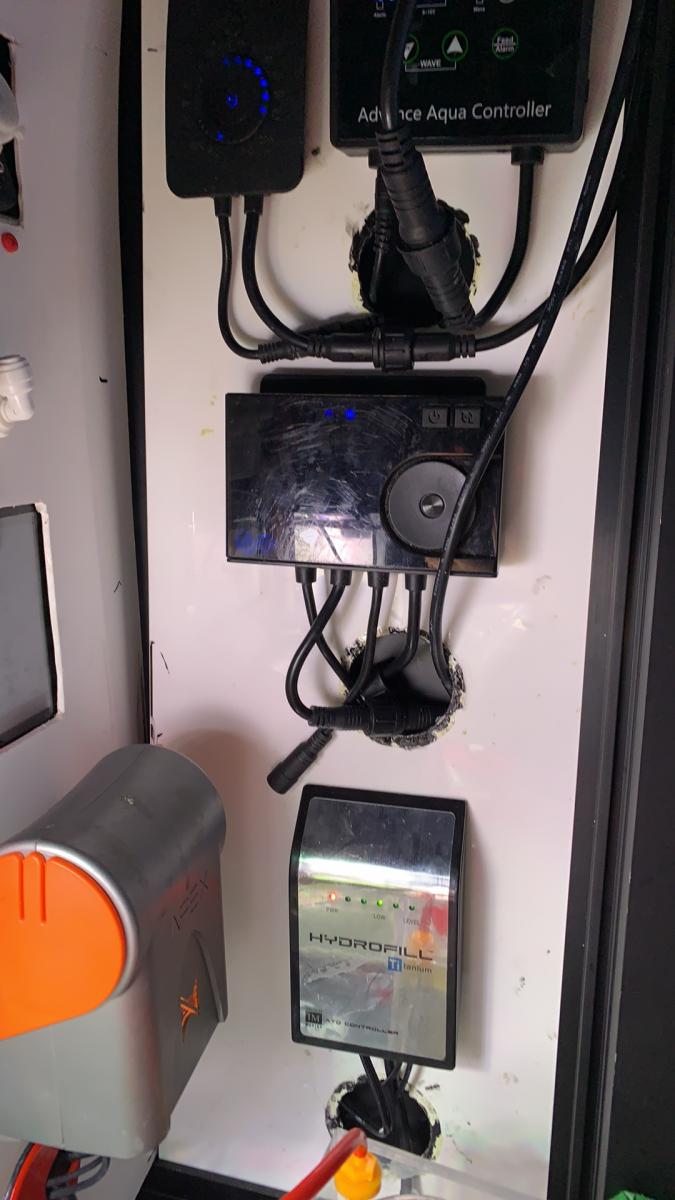 The EB832 is hidden in the back but still able to see it. I used grey 1x1 raceway and painted it red to match. Turned out well. The dosing pump lines and bulkheads in the board go out to the tank. The other lines take from the dosing reservoir. More on what I will be dosing later. The ATO will be located outside the stand on the right. It doesn’t look great out so any advise would be perfect. It is only a matter of time before I start to take some flack for it. 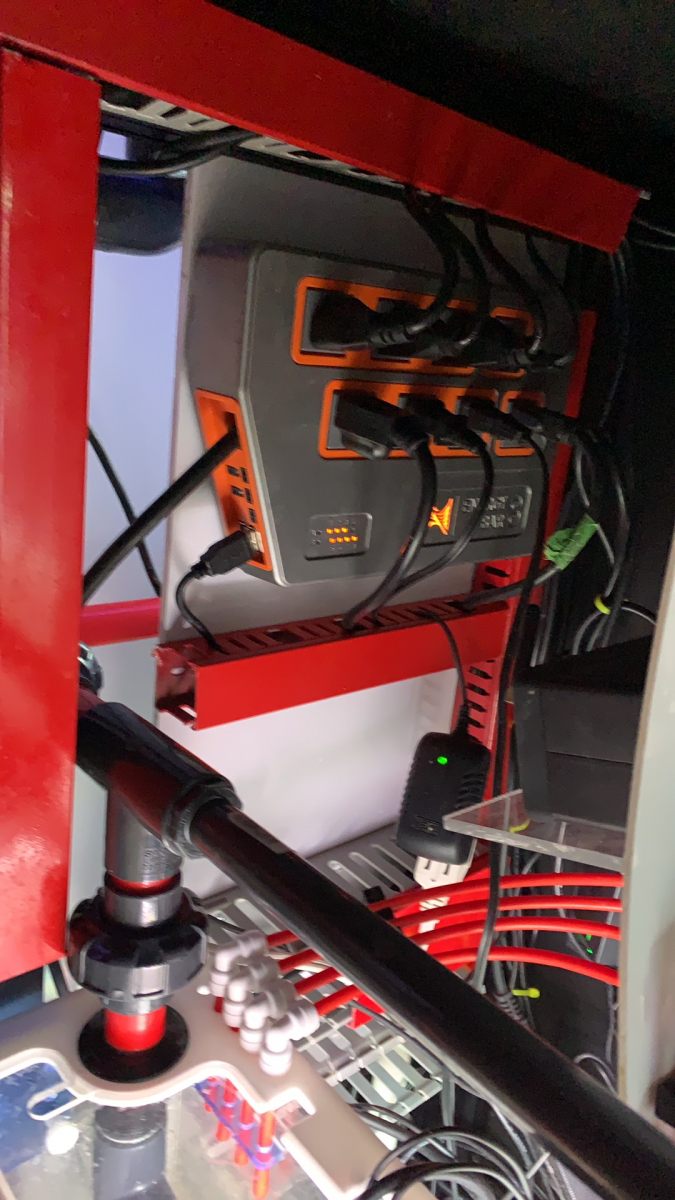 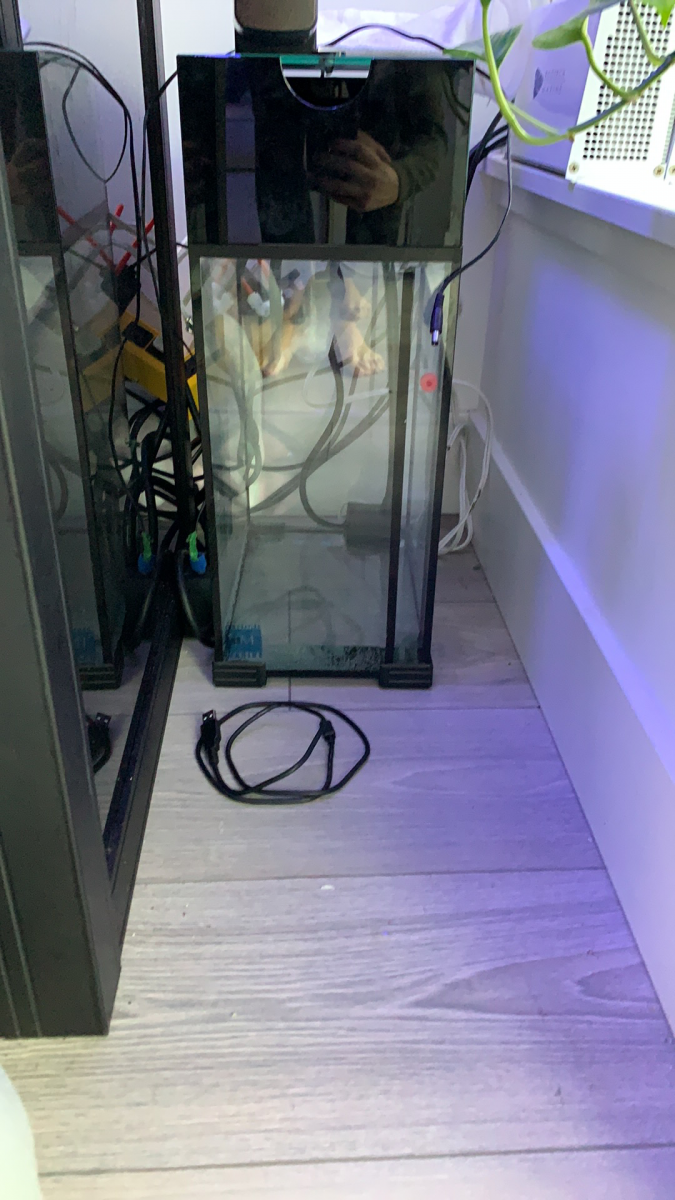 Like many things, I will probably have a new apex board custom built at a later date when I find out what will work with this tank and of course…. Financially recover!

The new board will be a similar layout but probably more of a cabinet style under the tank. It will have mostly cutout’s for the screen, dosing pump, holes for ¼” bulkheads and more wire storage. I am towing with Adaptive Reef but I think they may be too large. I only have 11 inches of width. Any suggestions???

Water and livestock are currently in the tank. Will post pics later. I am just playing catch up with my build thread but there is plenty of stuff I need to do in future.